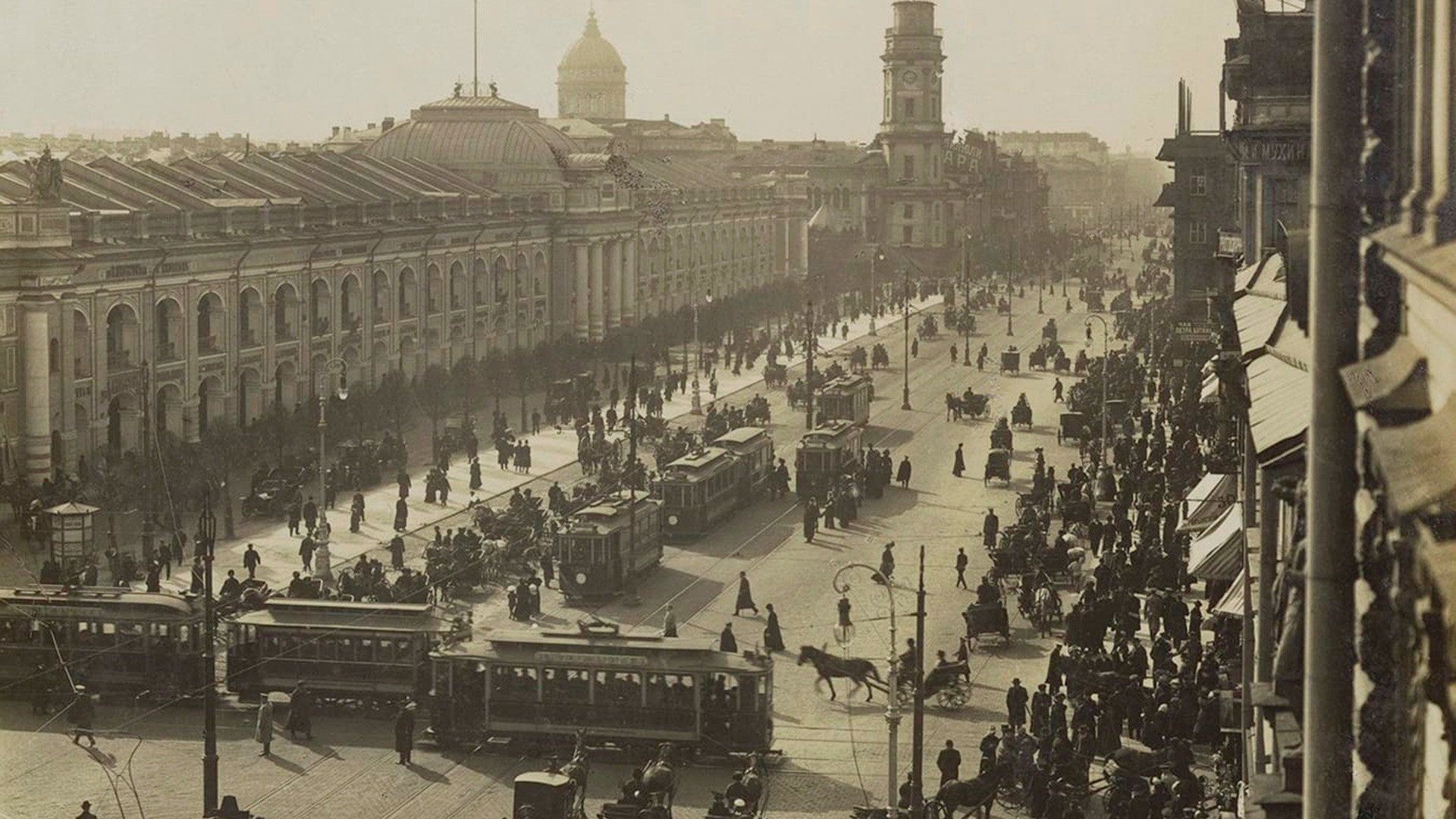 What did the streets and canals of the Russian imperial capital look like during the reign of the last Romanovs? 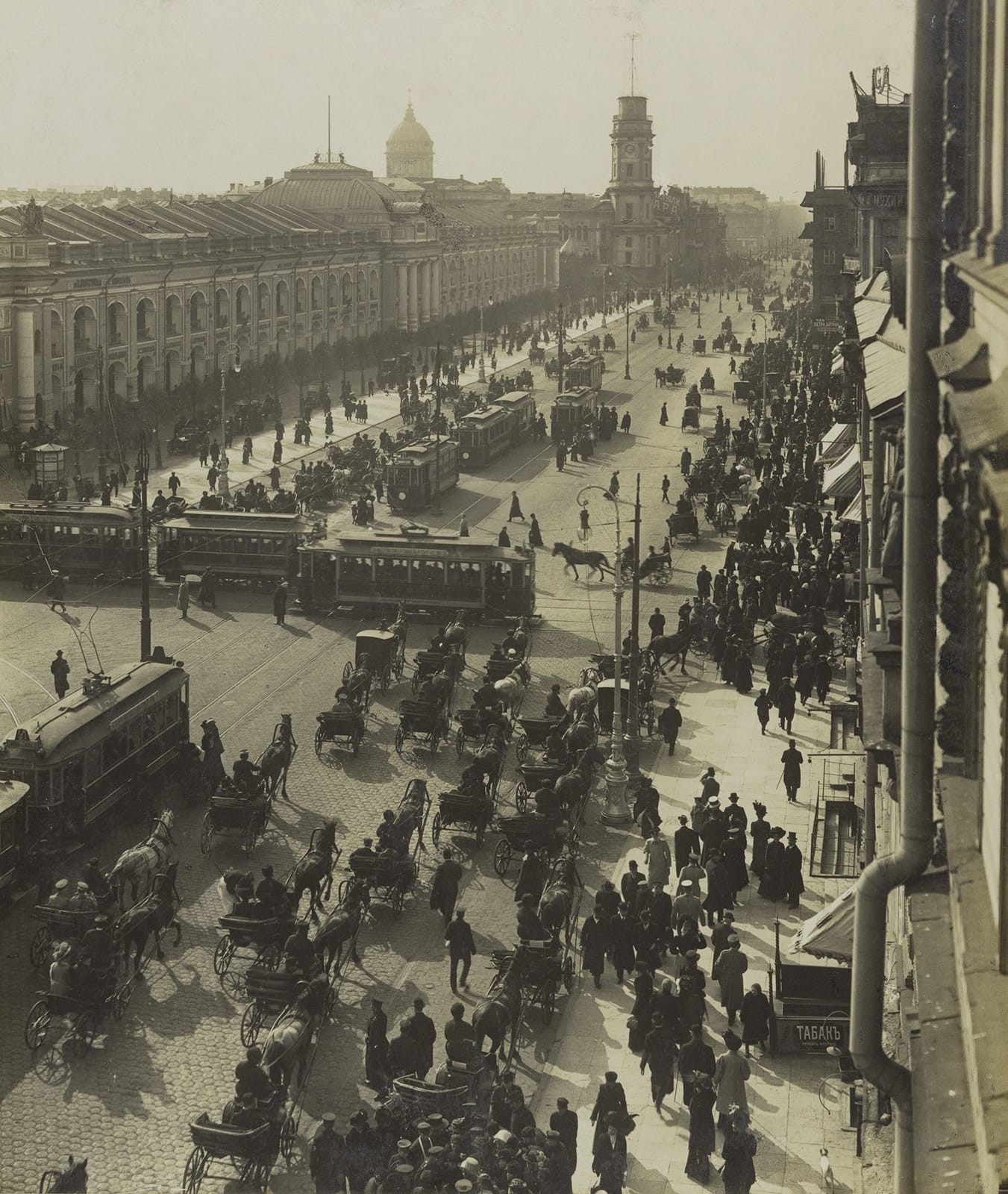 These days, the main thoroughfare of the former capital is covered with asphalt, has trolleybus wires instead of tram tracks, and is often locked in traffic jams still. Albeit these days vehicles stuck in traffic are cars rather than horse-drawn carriages. 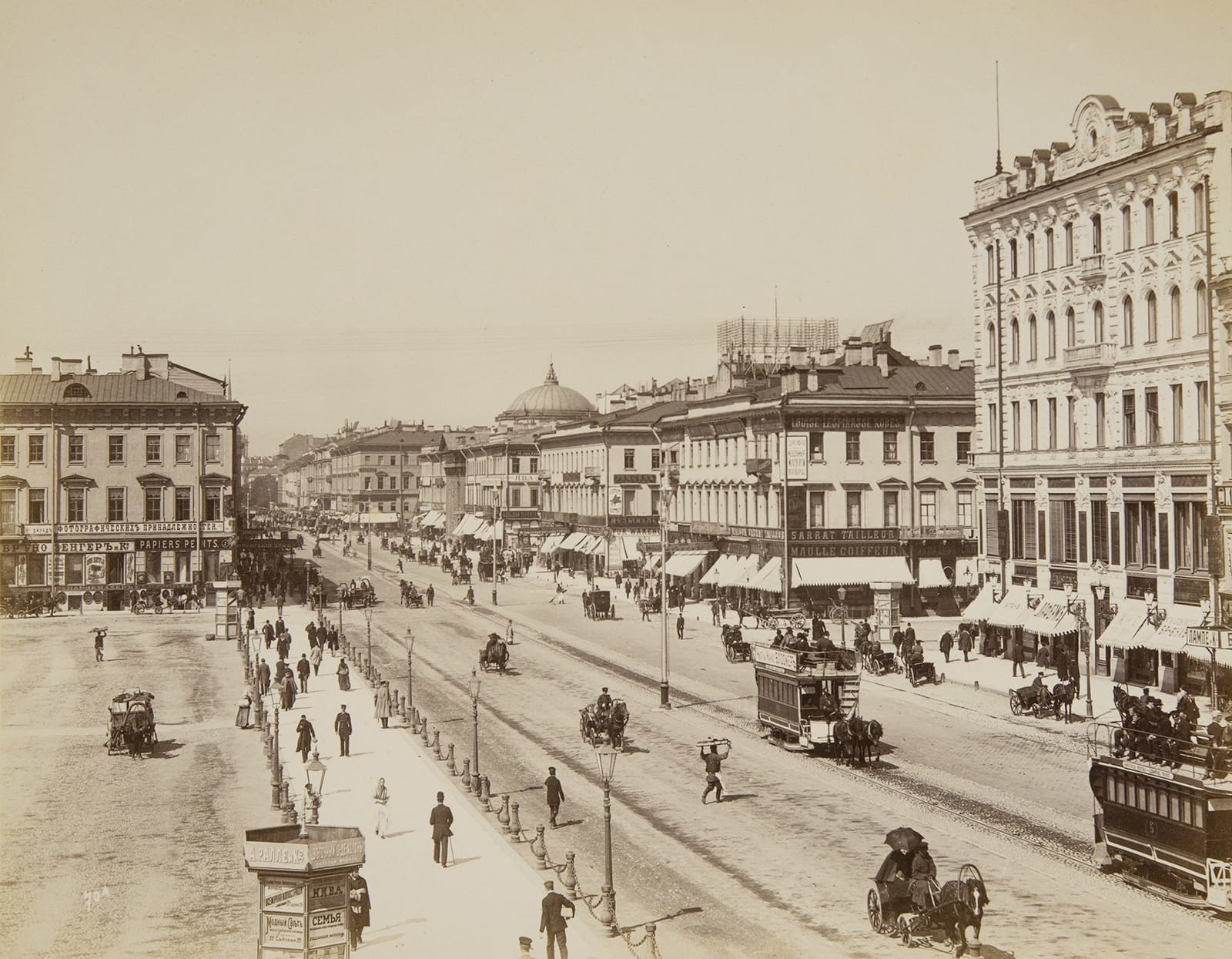 Here is another view of the city's main street. See the famous horsecar, also known as a horse tram? It was one of the first means of public transport in St. Petersburg, first launched in 1863. The line ran from Vosstaniya Square along Nevsky Prospekt to the Spit of Vasilievsky Island. 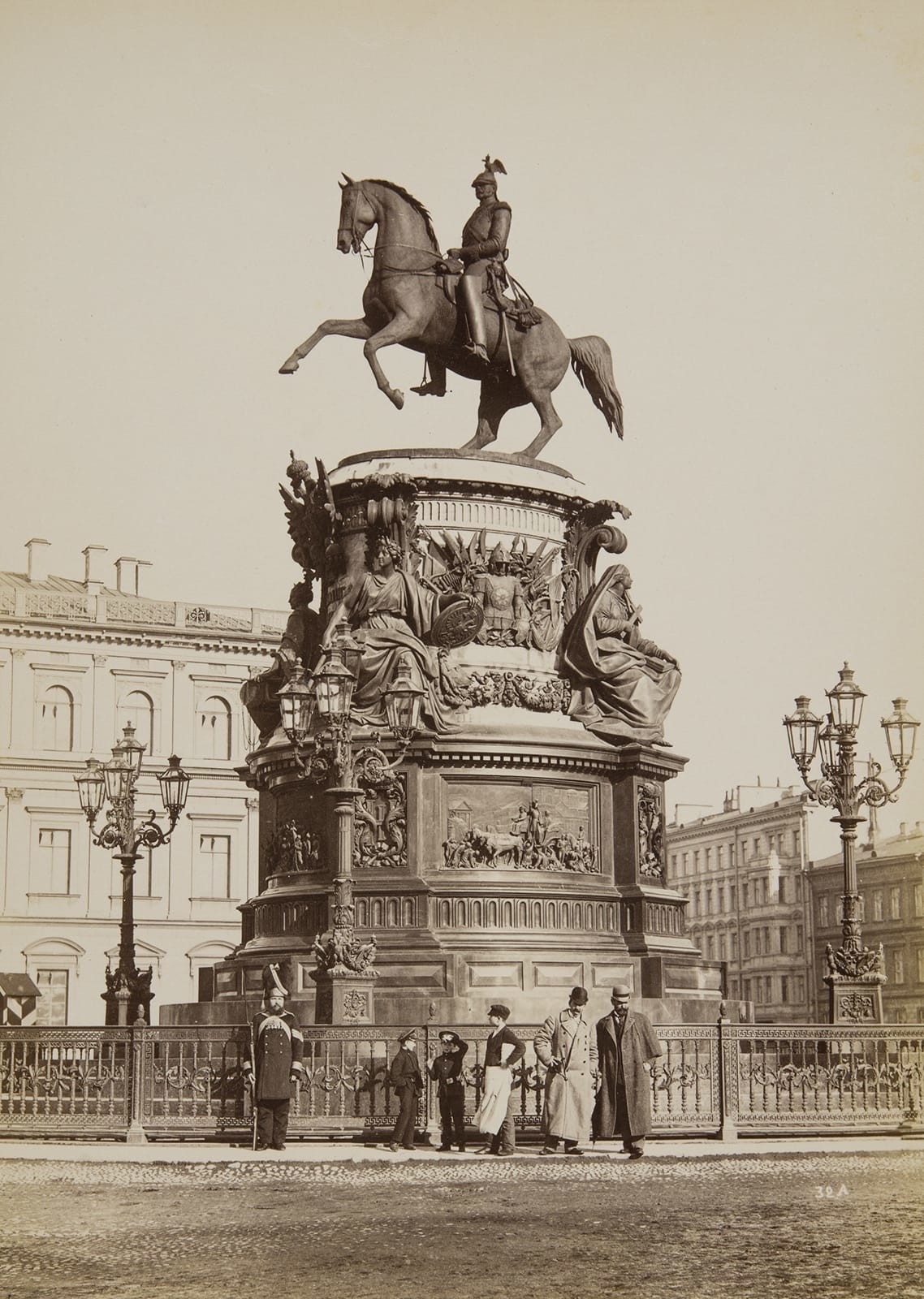 The equestrian statue of Nicholas I in full uniform was erected in 1859 and still stands in front of St. Isaac's Cathedral. 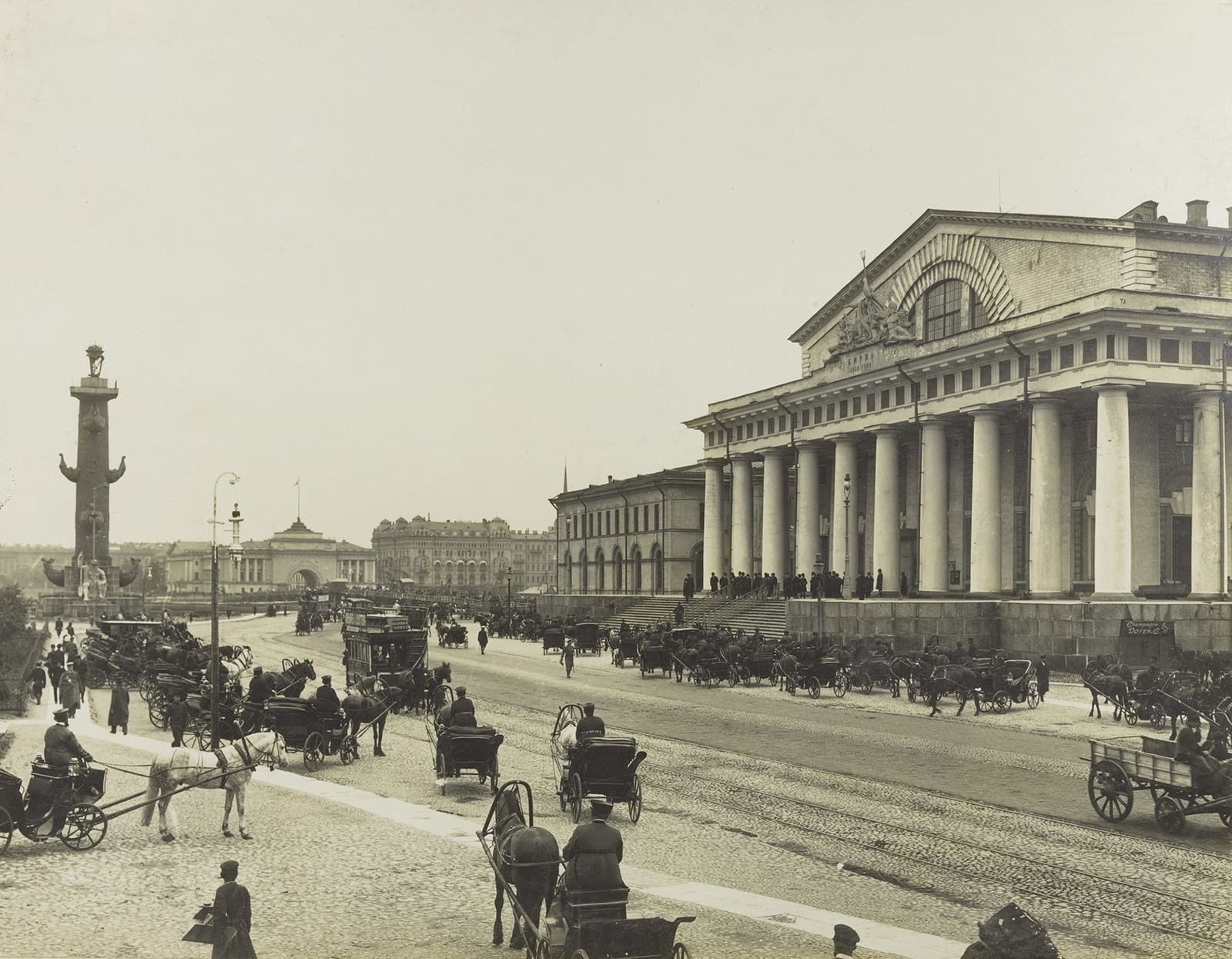 The centerpiece of the Spit of Vasilievsky Island is the building of the Stock Exchange designed by the French architect Jean-François Thomas de Thomon. In the background, one can see one of the famous Rostral Columns, which had quite a practical function in the 19th century: they served as beacons for the port. 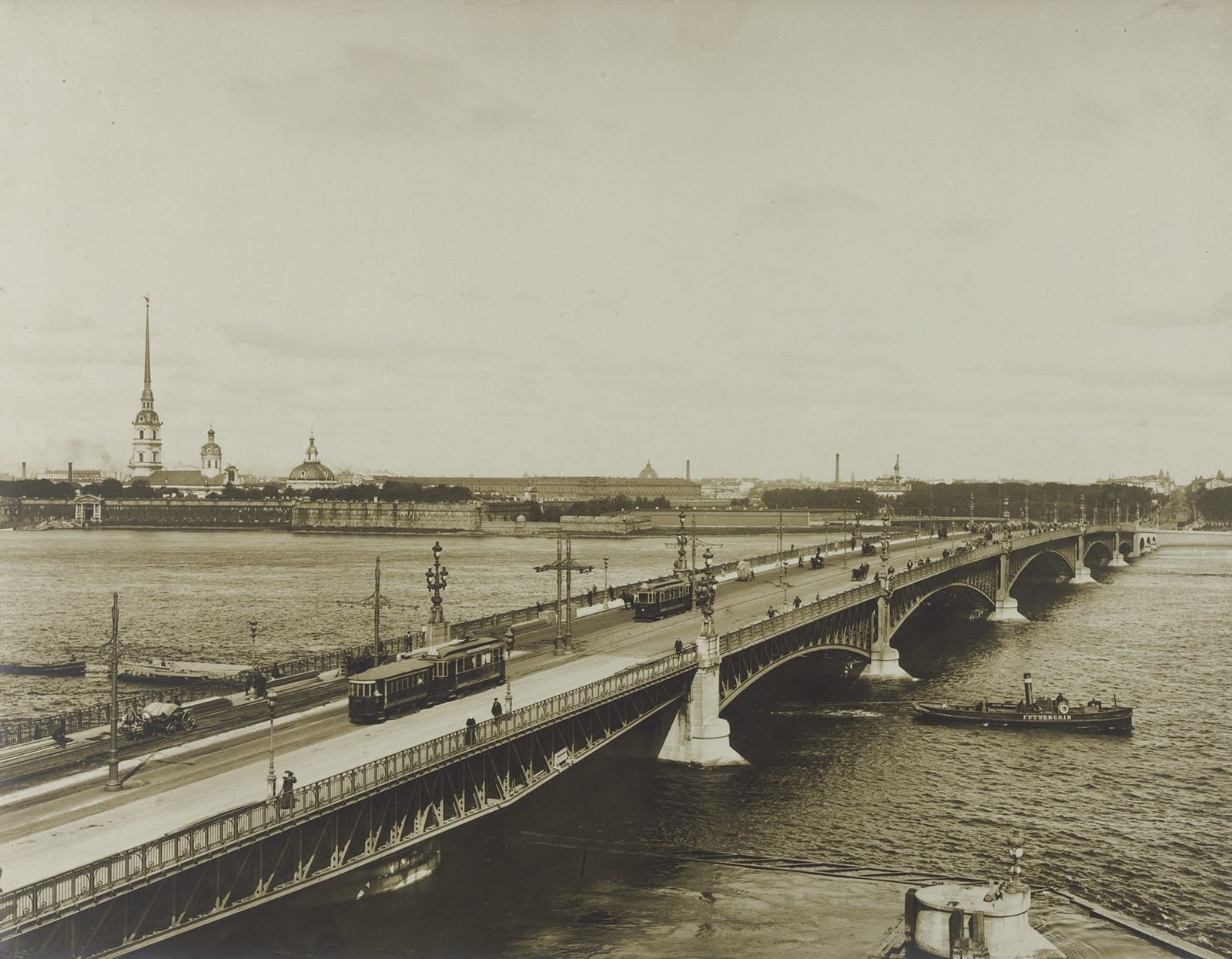 These days, Trinity Bridge is one of the city's most recognizable sights: hundreds of tourists gather every night to watch it being raised. It is therefore difficult to imagine that in the photo the bridge was a recently opened novelty. 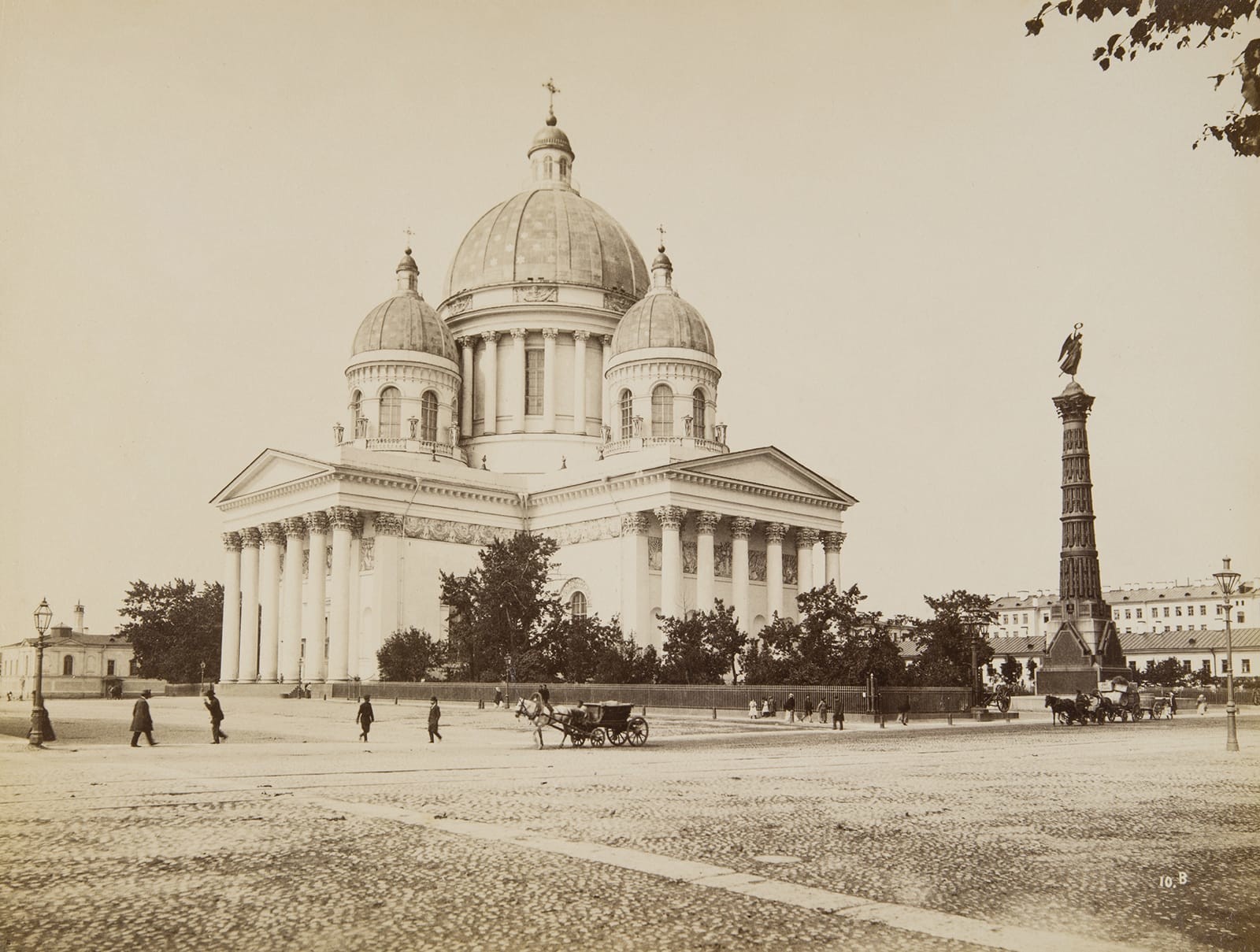 Originally, there was an Izmailovsky Life Guards Regiment church on this site, but it was badly damaged in a flood in 1824. Then, a new stone church was built in its place with money donated by Nicholas I. It opened in 1835, but less than a century later, in 1938, was closed by the Soviet government until 1990. Incidentally, it was here that Dostoevsky was married to Anna Snitkina. 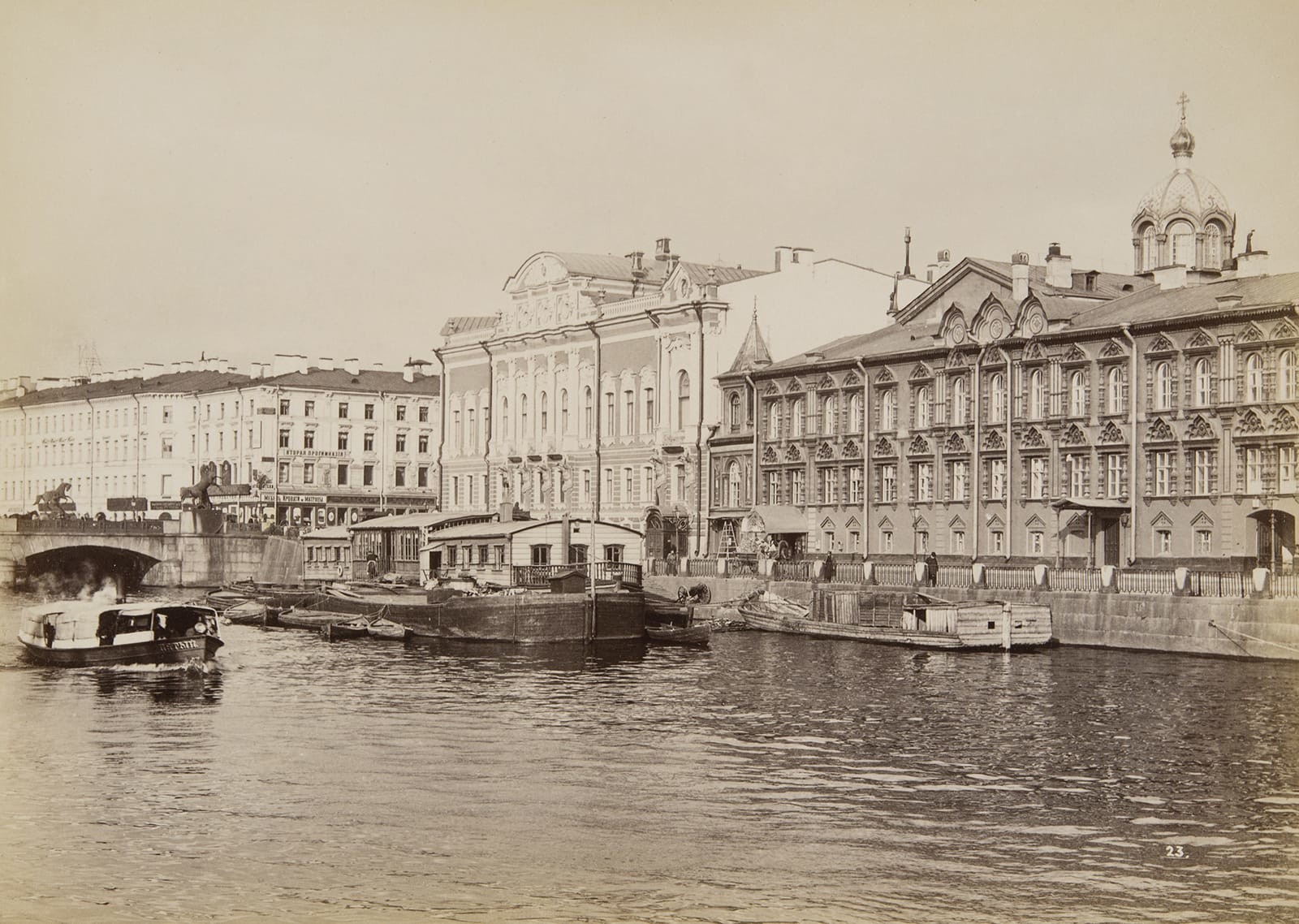 Not far from the cathedral runs the Fontanka River, separating the official and residential parts of the city. Once, it marked the southern border of St. Petersburg. In the 18th century, the swampy river was cleaned and enclosed by granite embankments in order to supply water to the fountains of the Summer Garden, hence its name.

Now numerous tourist boats run along the Fontanka, which also serves as the main route to the Great Neva. 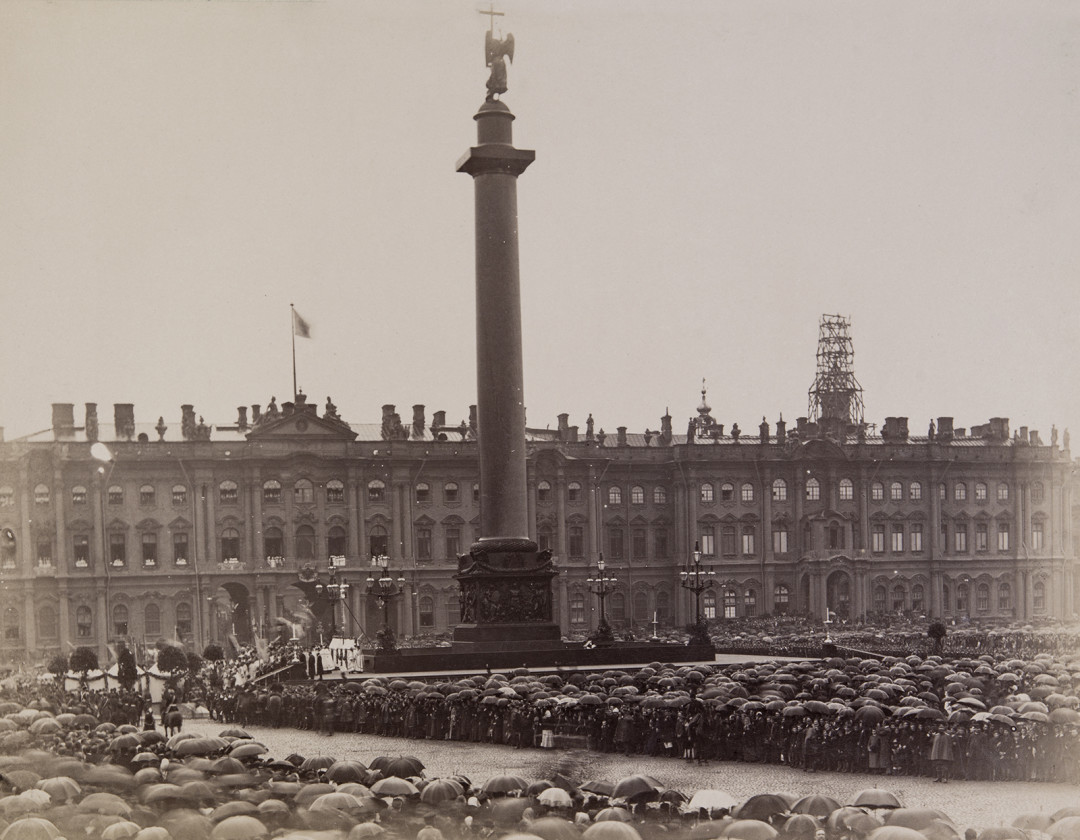 As you can see, the square in front of the Winter Palace has not changed much: for almost two centuries now, it has had the Alexander Column in its center and has served as the main venue for military parades. 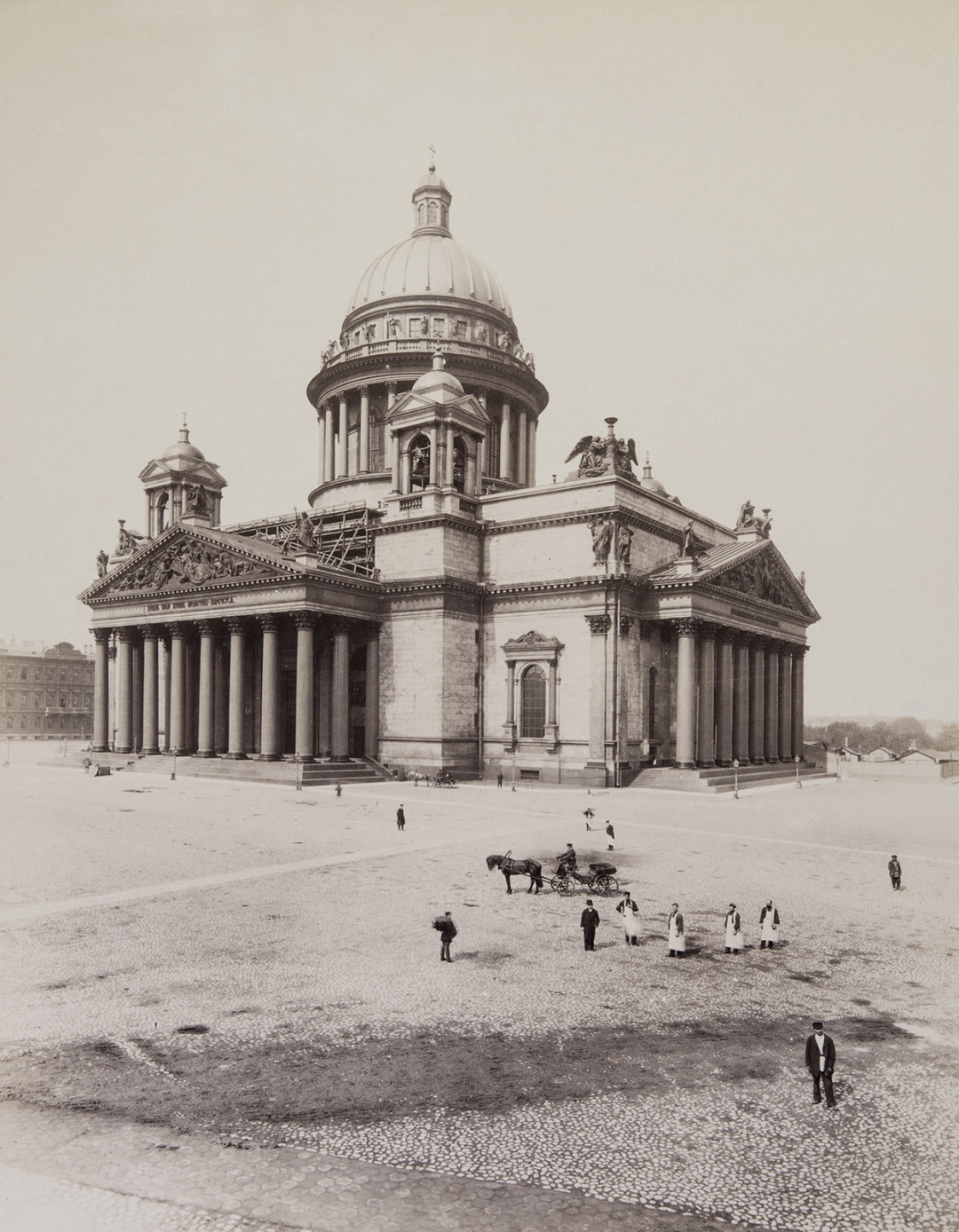 One of the main cathedrals of St. Petersburg took nearly 40 years to build and was opened in 1858. Now there is heavy traffic around it, but once there was a splendid pedestrian area here. 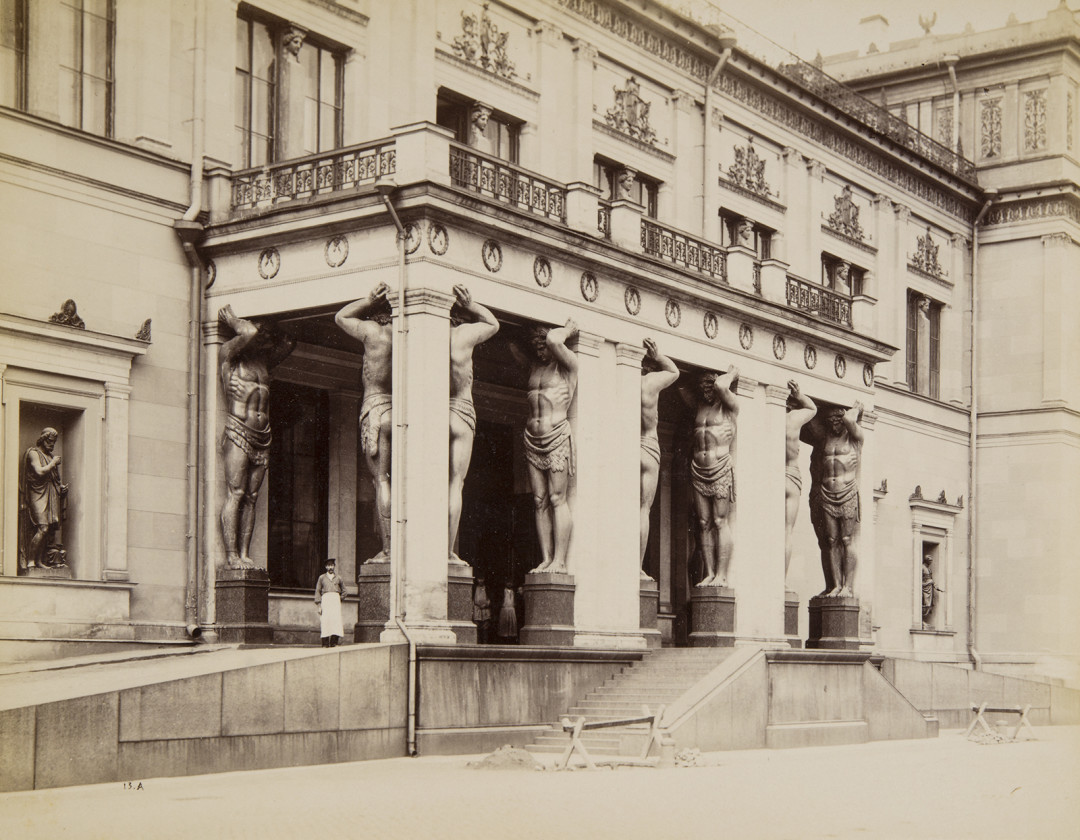 One of the symbols of the Hermitage - the famous Atlantes - were installed in 1851. It was then that the building of the New Hermitage was completed to house art treasures that could no longer fit inside the palace. Incidentally, until the 1920s, the main entrance to the museum was here. 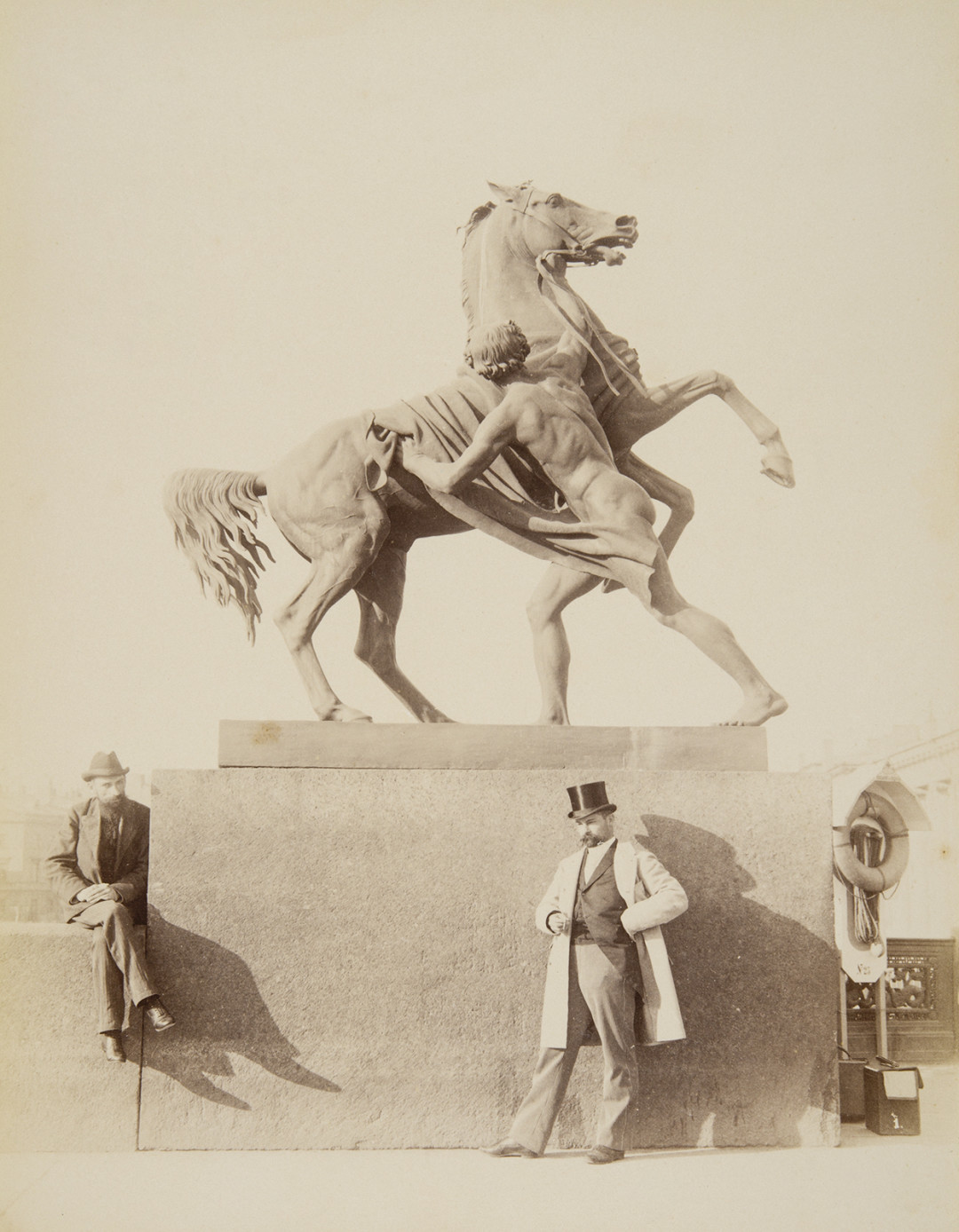 One of the highlights of Nevsky Prospekt is the stone Anichkov Bridge with the famous horse sculptures by Peter Klodt. It was opened in 1842 to replace an old stone and wooden bridge and has been preserved unchanged to this day. 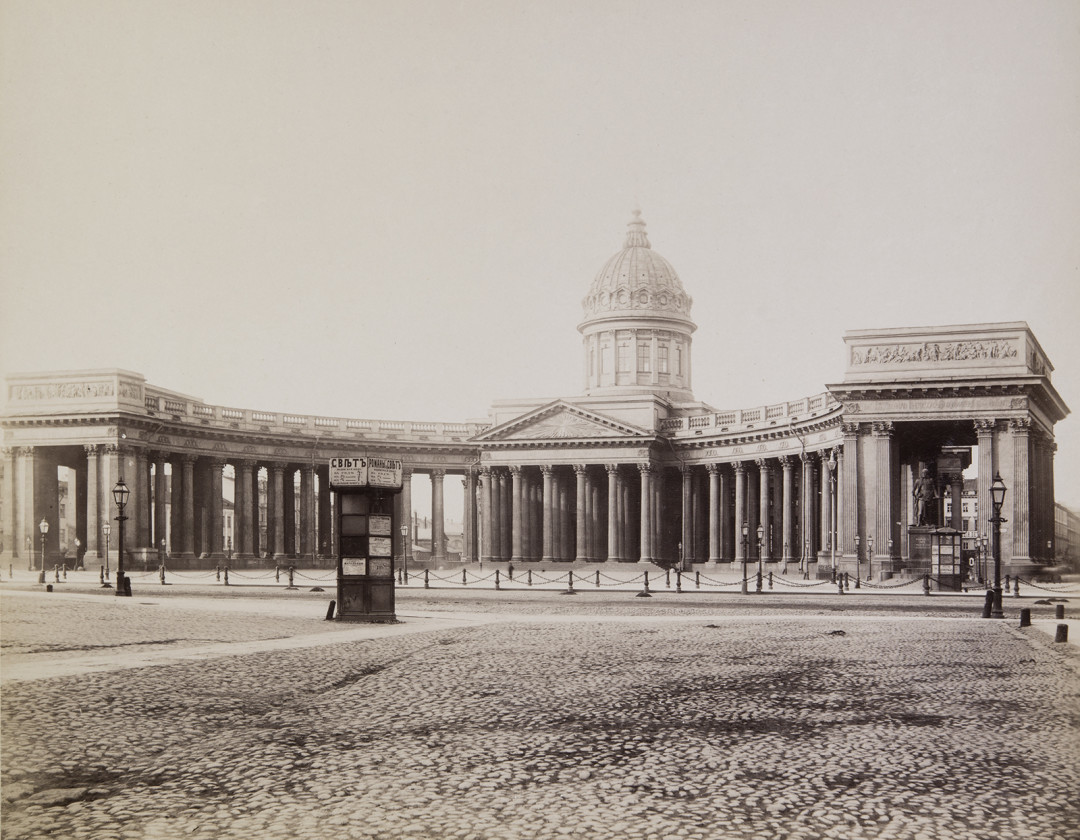 The cathedral was consecrated in 1811, and later became the main repository of trophies of the war with Napoleon. It is associated with at least two major tragedies. In 1905, the square in front of the cathedral was the scene of what became known as the Bloody Sunday massacre, when soldiers fired at a peaceful demonstration of workers. And in 1913, some 34 people were killed in a stampede during a liturgy dedicated to the 300th anniversary of the Romanov dynasty.

These and other photographs of the city can be seen on display at the ROSPHOTO museum and exhibition center in St. Petersburg till 26 January 2020.