What a Frenchman discovered in Kalmykia, where the Russian desert meets Buddhism (PHOTOS) 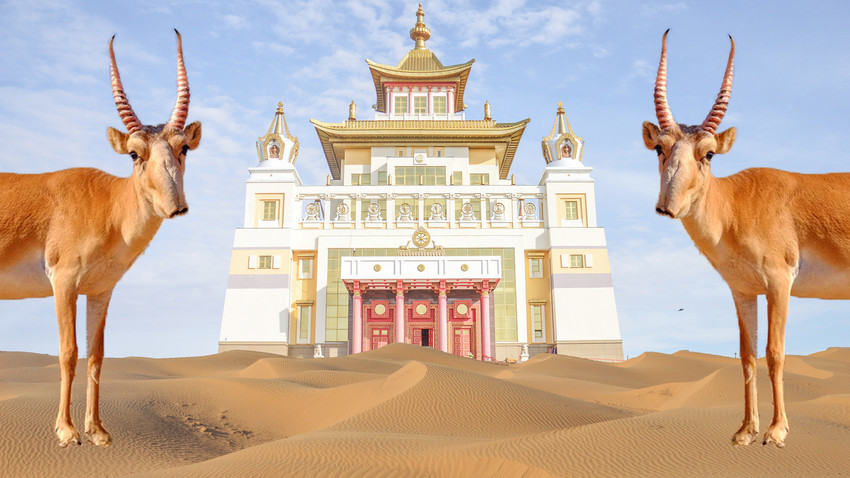 Erwann Pensec
Far from the uniform vision of Russia that we, wrongly, often have, the Republic of Kalmykia, bordering the Caspian Sea, appears to be the quintessence of the contrasts and the diversity which characterize this country. The only Buddhist region on the European continent, it offers to the travelers an arid landscape, dominated by infinite steppes and sand dunes, but also by Buddhist temples and pagodas.

Under a blazing sun, while we tread barefoot the hot sand of dunes worthy of the Sahara, a horse breeder approaches us. Keeping an eye on his herd grazing on some tufts of dry grass in the distance, he confides that he has recently performed a pagan ritual, in order to invoke the clemency of the heavens, as no rain has been falling on this arid land for the last three months. The scene is set. However, I am neither in Africa, nor in the Atacama Desert, but in the Republic of Kalmykia, a Russian region north of the Caspian Sea. 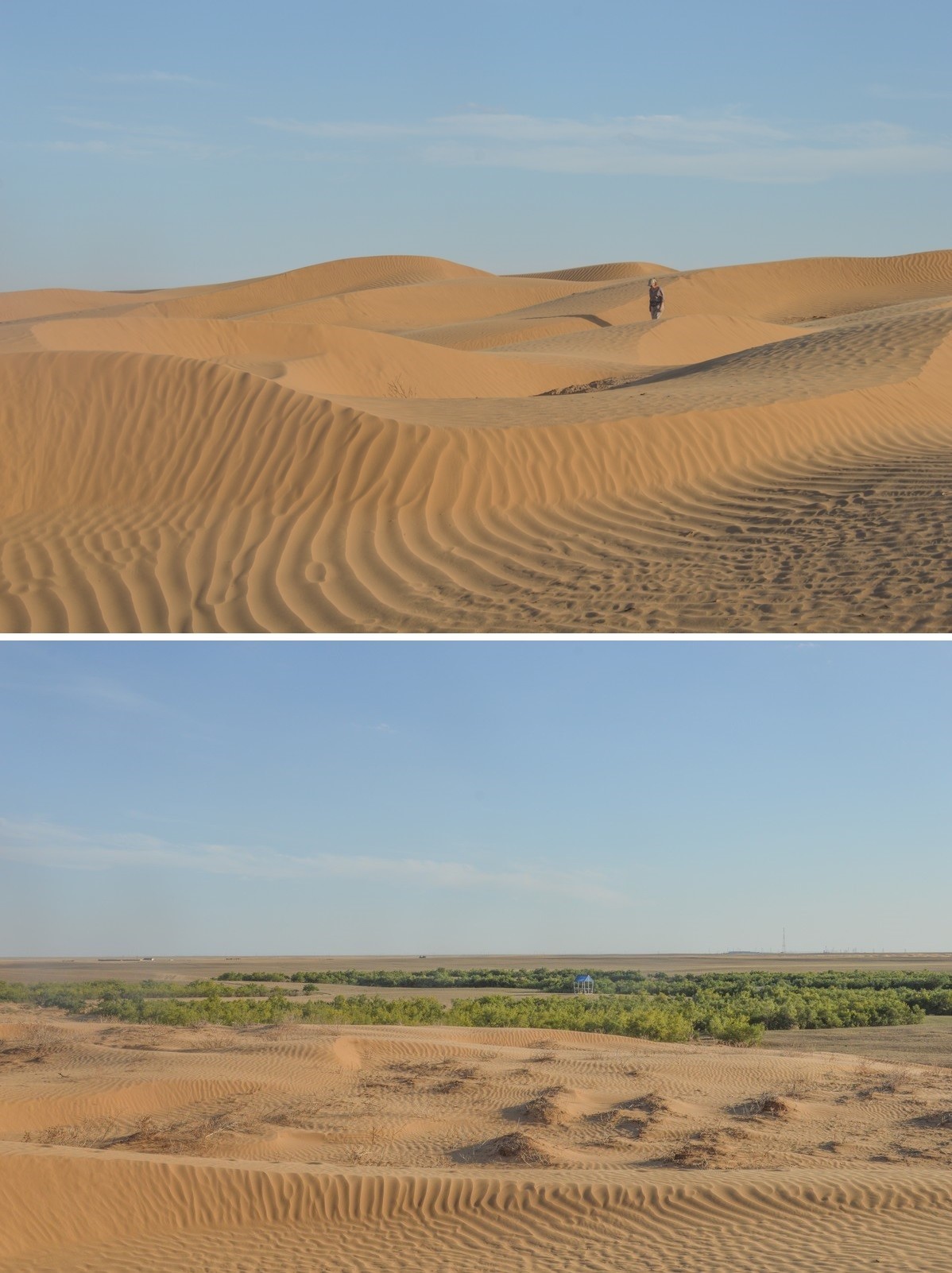 The name of its capital, Elista, is moreover evocative, since it translates from the Kalmyk language as “place of sand”. The ‘Pearl of the Steppes’, as it is nicknamed, truly appears like an oasis in the middle of nothingness. 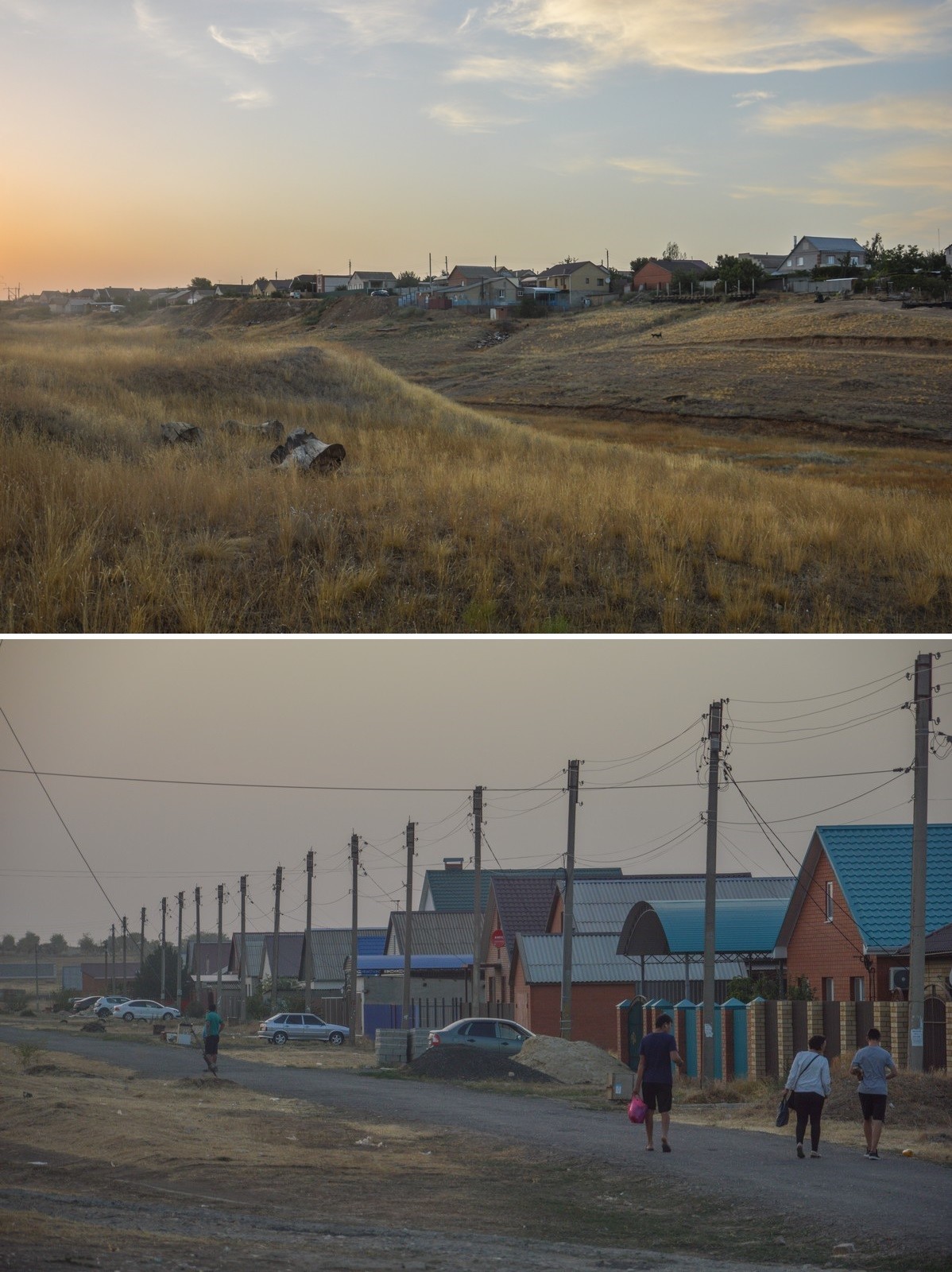 Founded in 1865, it remained for a long time only a village (1,507 inhabitants in 1914, against 103,000 today); the Kalmyks, the only Buddhist people and of Asian origin in Europe, had traditionally led a nomadic way of life in these vast areas. However, it was the Revolution of 1917 which changed the situation, the Soviet authorities having not been slow to undertake a forced sedentarization of the ethnic groups of the country. 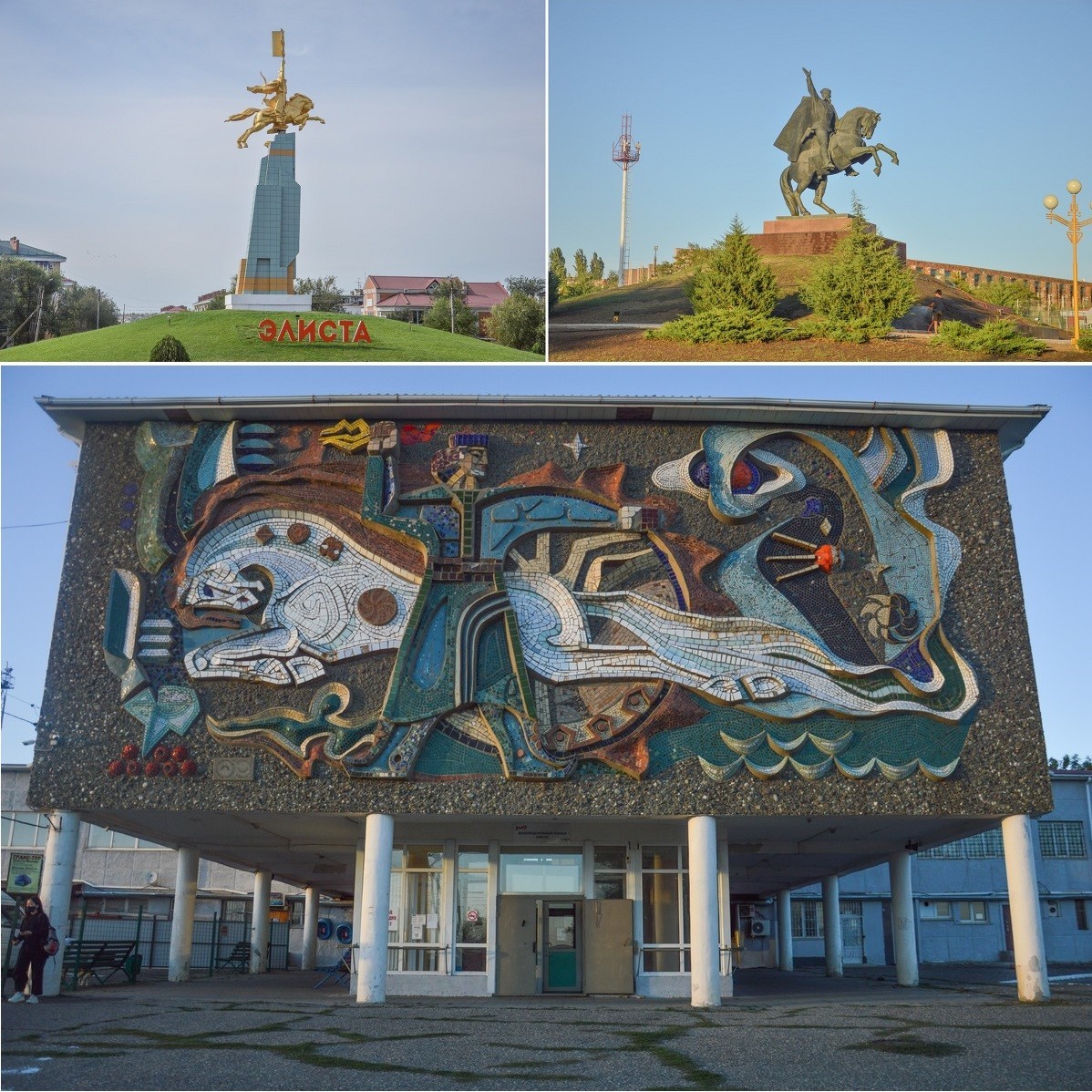 The horse, a symbol of nomadism, is omnipresent in Elista, whether in statues or in a sublime Soviet mosaic on the facade of the railway station.

To this precipitous abandonment of traditions, a second and most impactful event followed, a tragedy that occurred in the midst of World War II. In 1943, the mass deportation of the Kalmyk people to Siberia and Central Asia, as well as the dissolution of the Kalmykia Autonomous Soviet Socialist Republic, was effectively ordered by the state authorities, accusing them of desertion and collaboration with the enemy. This process, carried out under terrible conditions, resulted, according to some sources, in the death of nearly half of the Kalmyk people (134,000 in 1939, 78,000 in 1950) and it was only in 1956 that these cousins of the Mongols were allowed to return to their ancestral land. 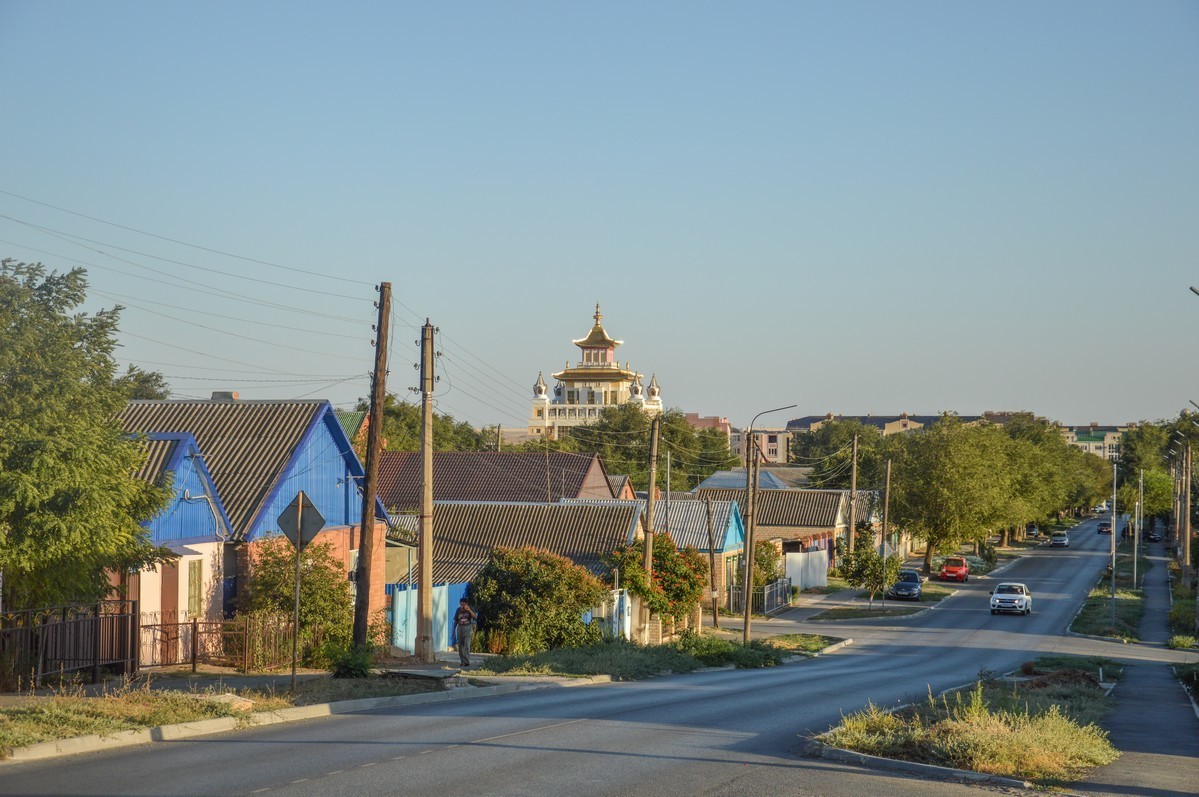 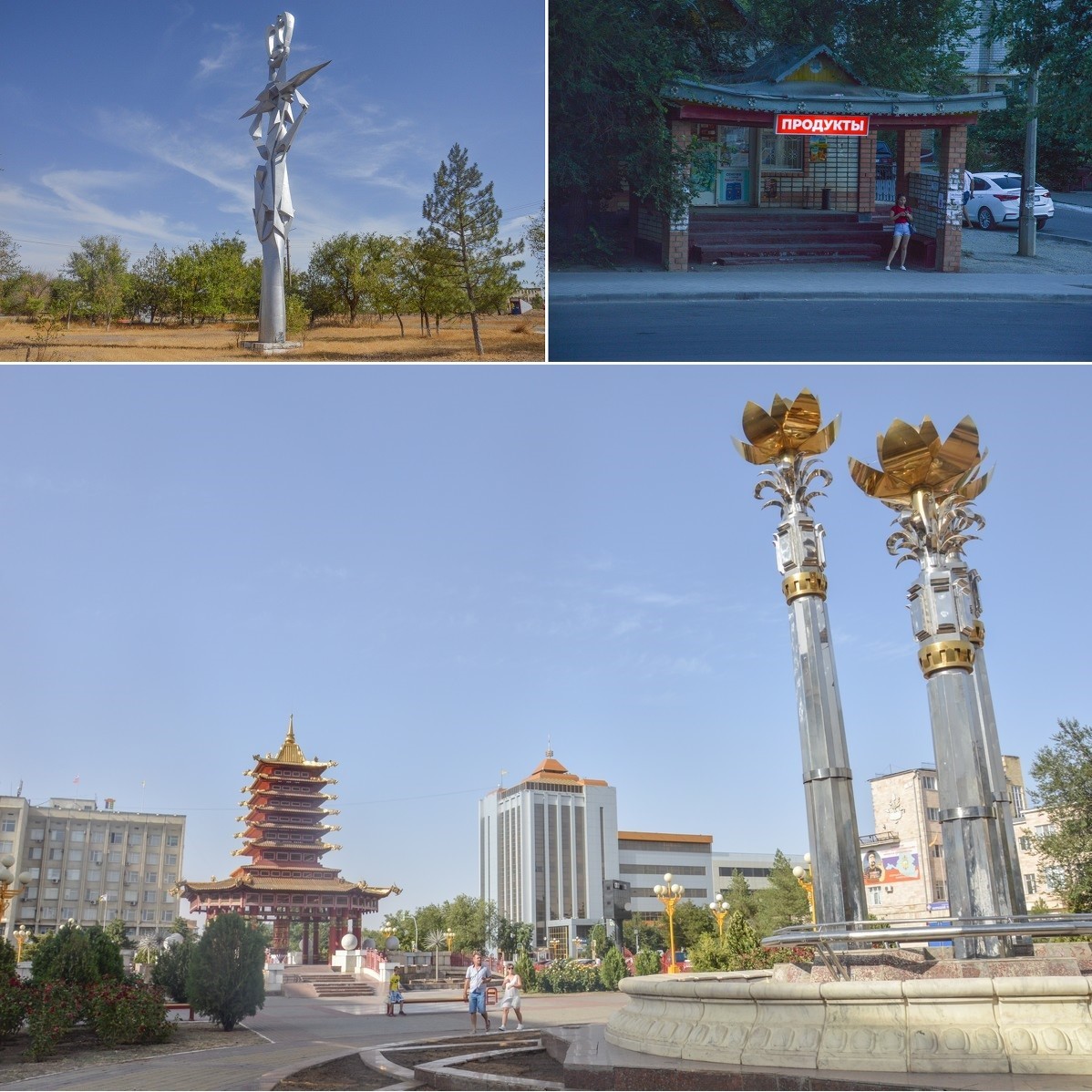 “Now it’s okay, everything is perfect, even. But, 15 years ago, it was difficult. There were regular attacks, the Kalmyks were resentful of us,” a local Russian confided to me in his southern accent. 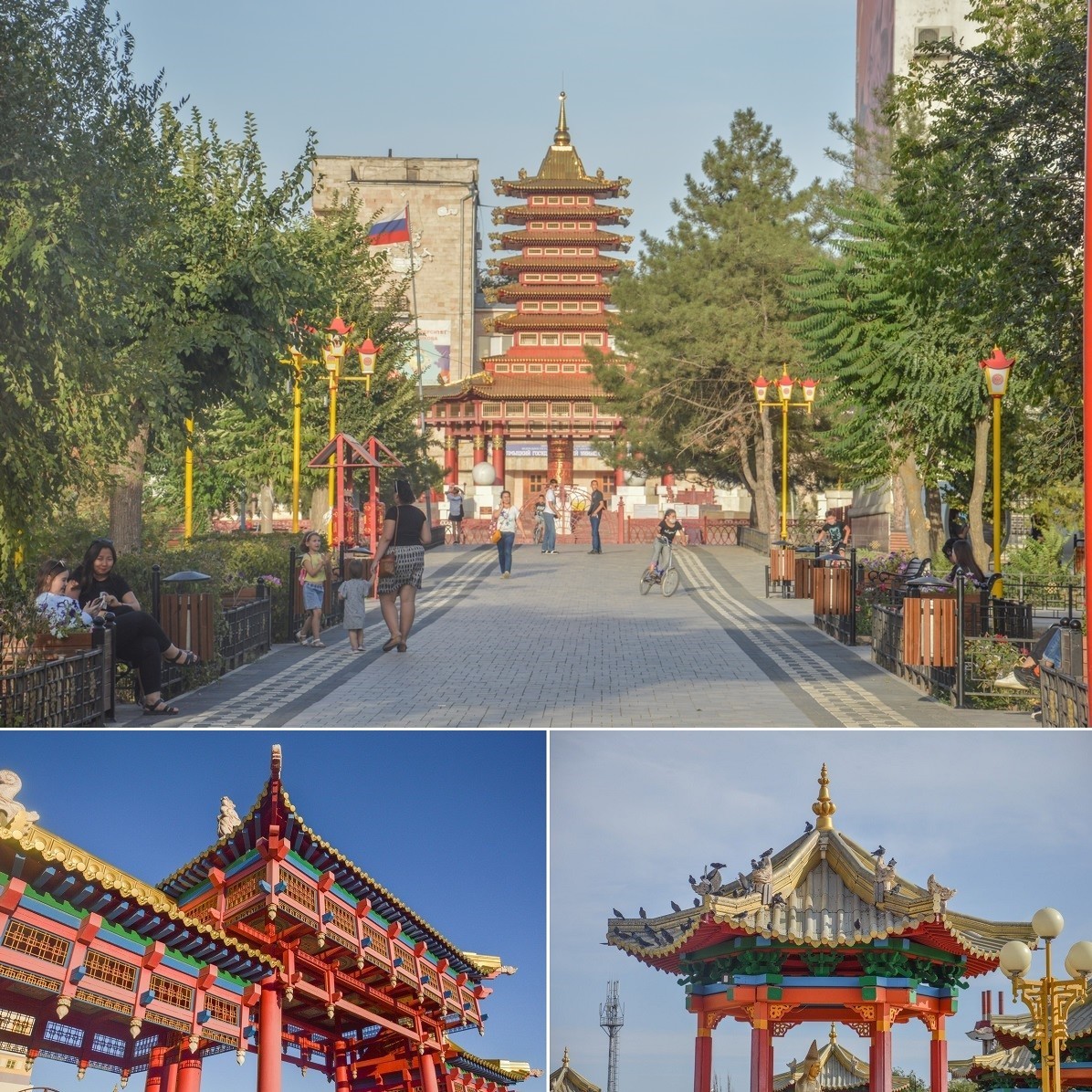 Although present in the memories, this dark page seems nevertheless now turned and the Kalmyk people, with fervor, reappropriate their identity: the Kalmyk language is taught in all the local schools, temples and Buddhist monuments flourish here and there, while Elista now displays an Asian-inspired architecture, of which the most shining example is the spectacular temple of the Golden Abode of Buddha Shakyamuni. 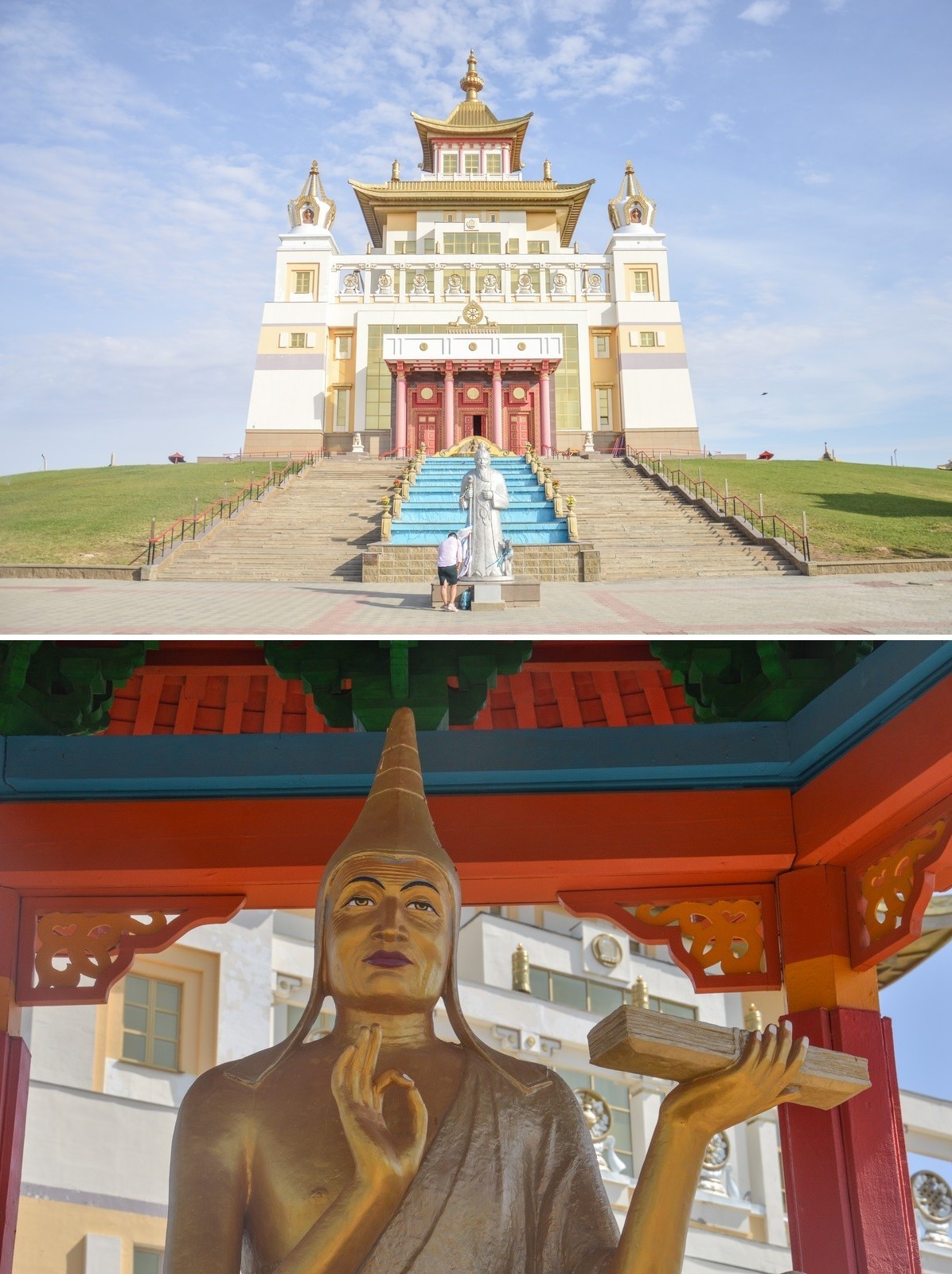 Built in only nine months and inaugurated in 2005, this 63-meter-high building amazes by its dimensions and its magnificence. Surrounded by 17 pagodas in the shade of which stand statues of deities, it has seven levels, including a vast and sumptuous prayer hall. The ambient serenity, reinforced by the meditative melody played continuously, is matched only by the devotion of the faithful who come, with folded hands, to worship in this sacred place.

Safari in the Kalmyk “savannah”

If there is one thing that fills the Kalmyks with pride, it is undeniably the surrounding nature. This republic, larger than Ireland and with desert appearances, conceals many treasures.

Planted by a Buddhist monk in 1846, the ‘Lone Poplar’ dominates the Kalmyk steppe. On the second photo: a source of salt water that also emits gas, which makes it possible to ignite it and to pass one’s hand over it without getting burned.

Watch my video of this phenomenon by following the link.

Watery fields of lotus (a sacred flower present on the Kalmyk flag), steppes covered with ephemeral tulips, dunes of sands, pink lakes, but also an exceptional fauna make it a destination of choice for lovers of wildlife. 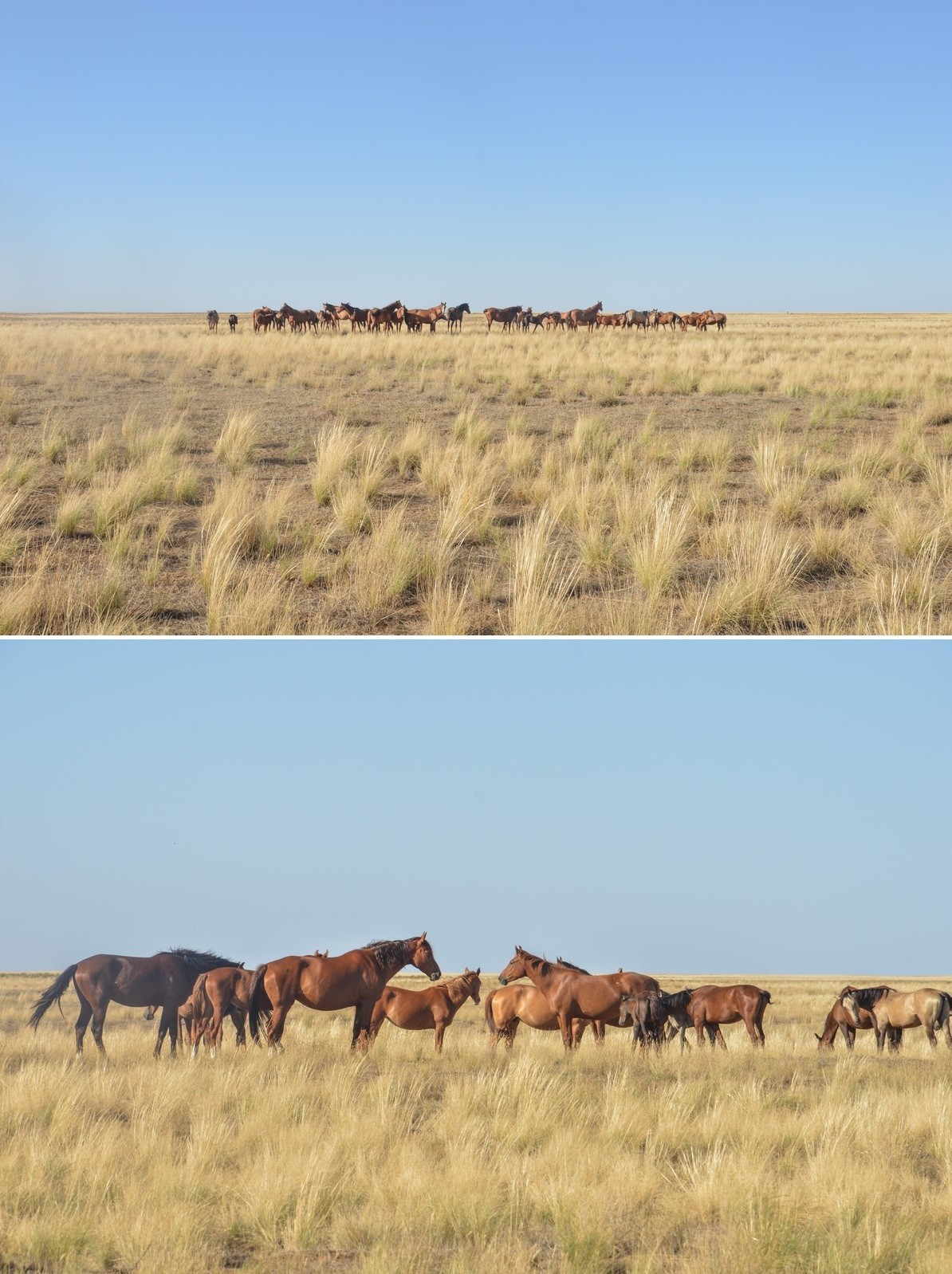 Of these wonders, the saiga is undeniably the most emblematic. Behind this name, unknown for many, hides in reality the only species of antelope still existing in Europe and it is this somewhat strange looking animal that motivated me, a Breton with delicate skin, to venture into these lands licked by the burning sun. 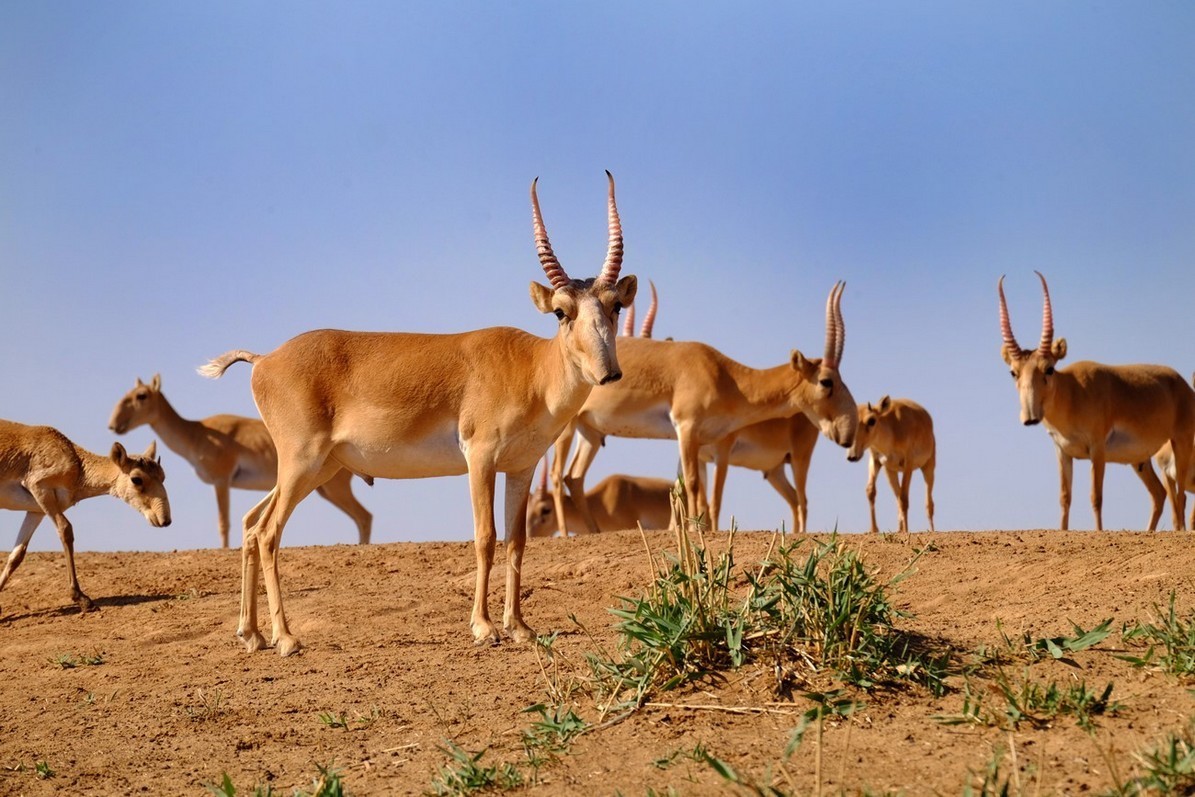 Founded in 1990, the Black Lands Nature Reserve in Kalmykia has consequently made the protection of this totem animal one of its most crucial objectives. A struggle that seems to be bearing fruit, since if on its territory there were only 3,500 saigas in 2015, their number is now 10-12,000. 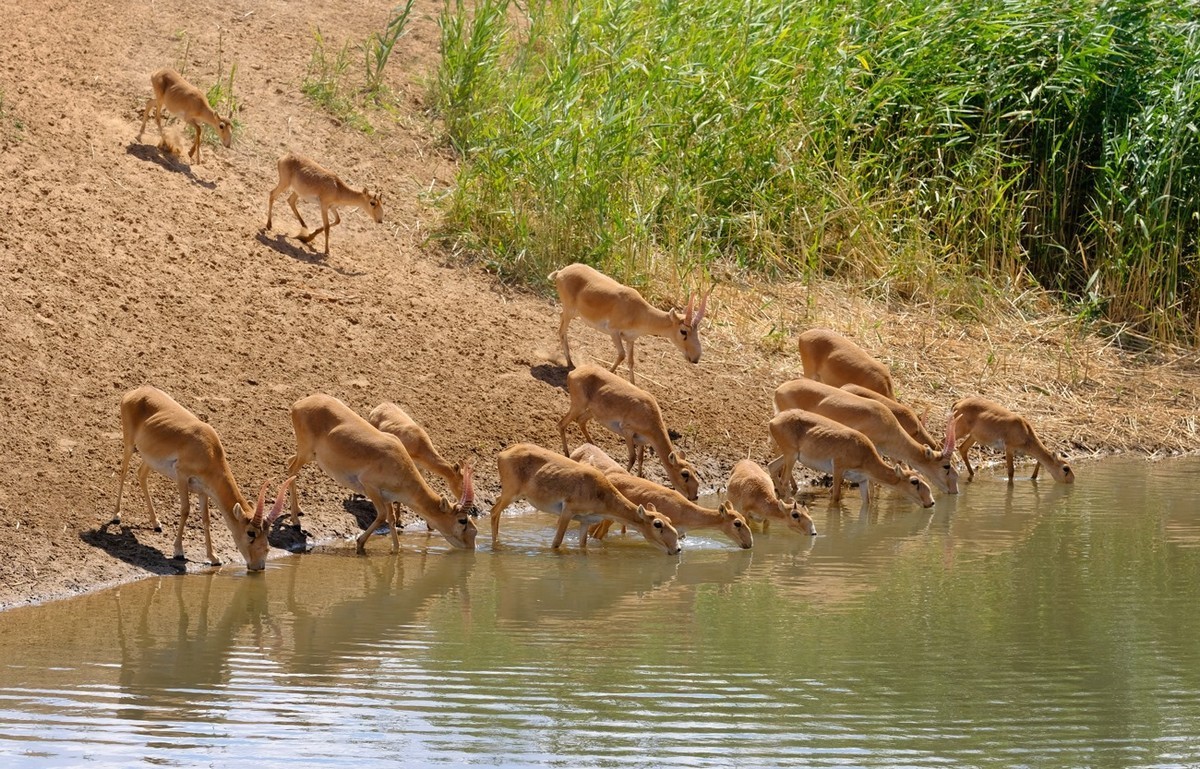 Driven by Rostislav, an employee of the reserve, almost four hours from Elista, my Kalmyk journey turns into a real safari. On board our all-terrain vehicle, we travel through the infinite expanses of this golden steppe, which looks like a savannah. Here and there, herds of saigas roam, while dozens of these graceful herbivores, at the approach of our car, cut in front of us on the road at full speed by jumps worthy of the best Bolshoi dancers. 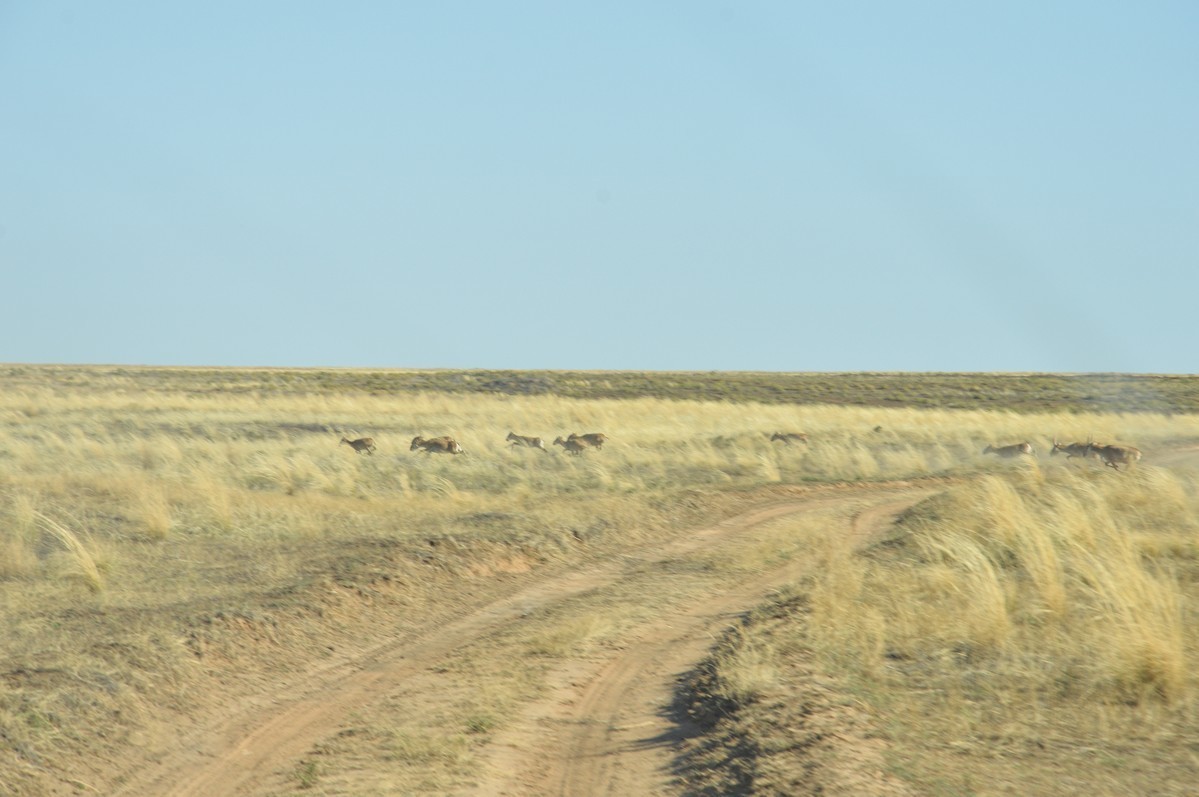 Further on, we stop and reach an observation point by foot, hidden behind camouflaged wooden panels. A striking spectacle opens up to me. Below this hill, a dry lake is drawn, on the banks of which graze hundreds of saïgas. An unforgettable scene, that I would have believed possible only in distant African countries. 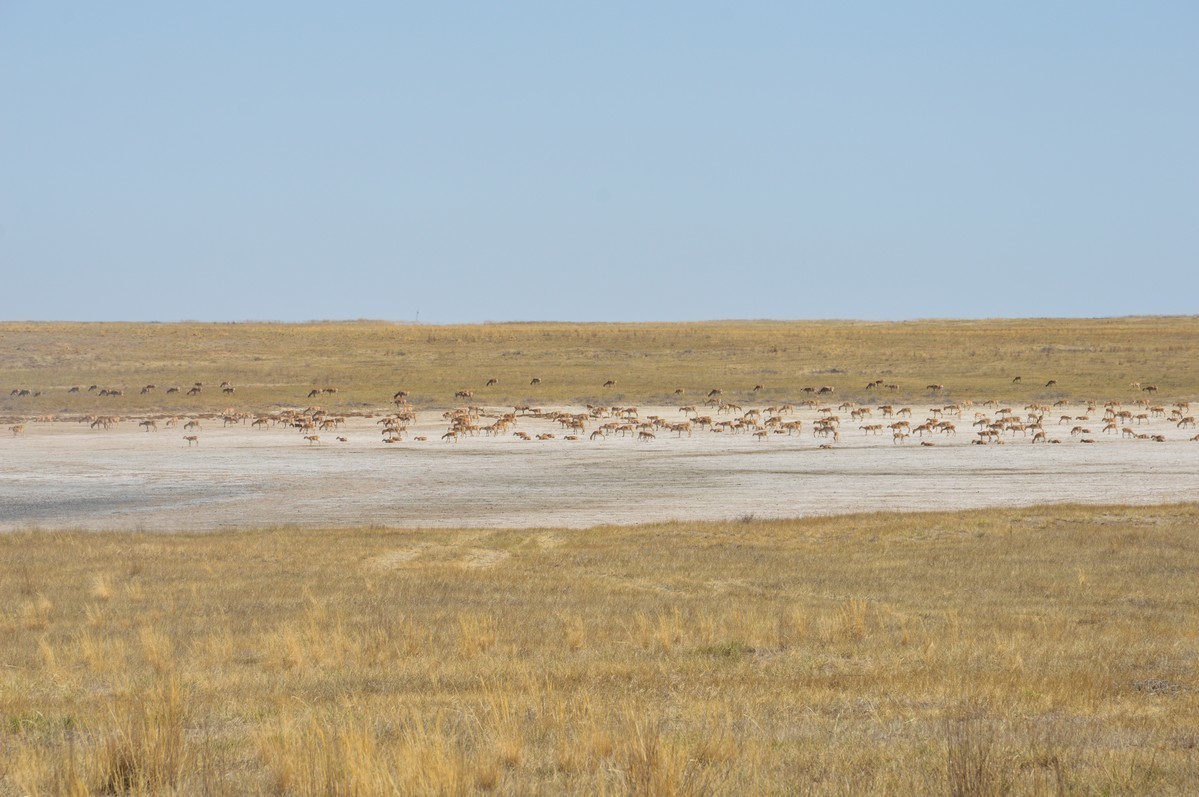 Read more: 10 Russian national parks you need to visit at least once in your life

Giving back to nature its rights, such is the work carried out by the reserve, which also aims to reintroduce in these lands animals that once populated the region, like the onager, a wild Asian donkey. In addition to the preservation of biodiversity, this long-term work has another effect, that of fighting against the galloping desertification of Kalmykia. Traveling through the region, one, indeed, often finds oneself in the middle of a quasi-lunar landscape, dotted with dried-up lakes. 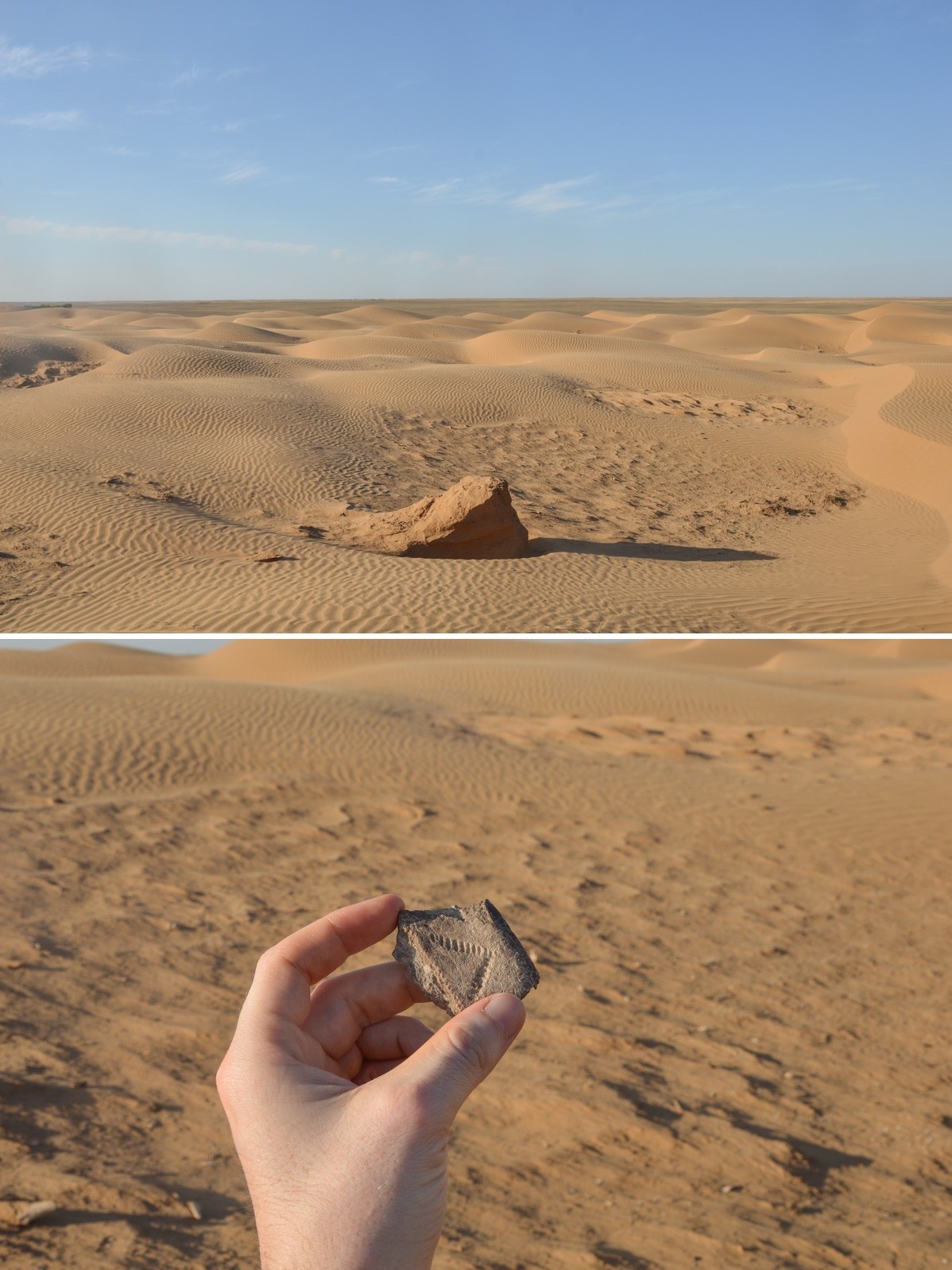 “The lake is drying up and, at such a speed, it scares me, in three years it will be gone, as well,” Vitali, another employee of the reserve, tells me about the lake Manych. “But they say it’s a cycle. During the war, apparently it was dry. My grandfather said that he walked on it then. We want to believe that this is the case, and not the end, with global warming.” 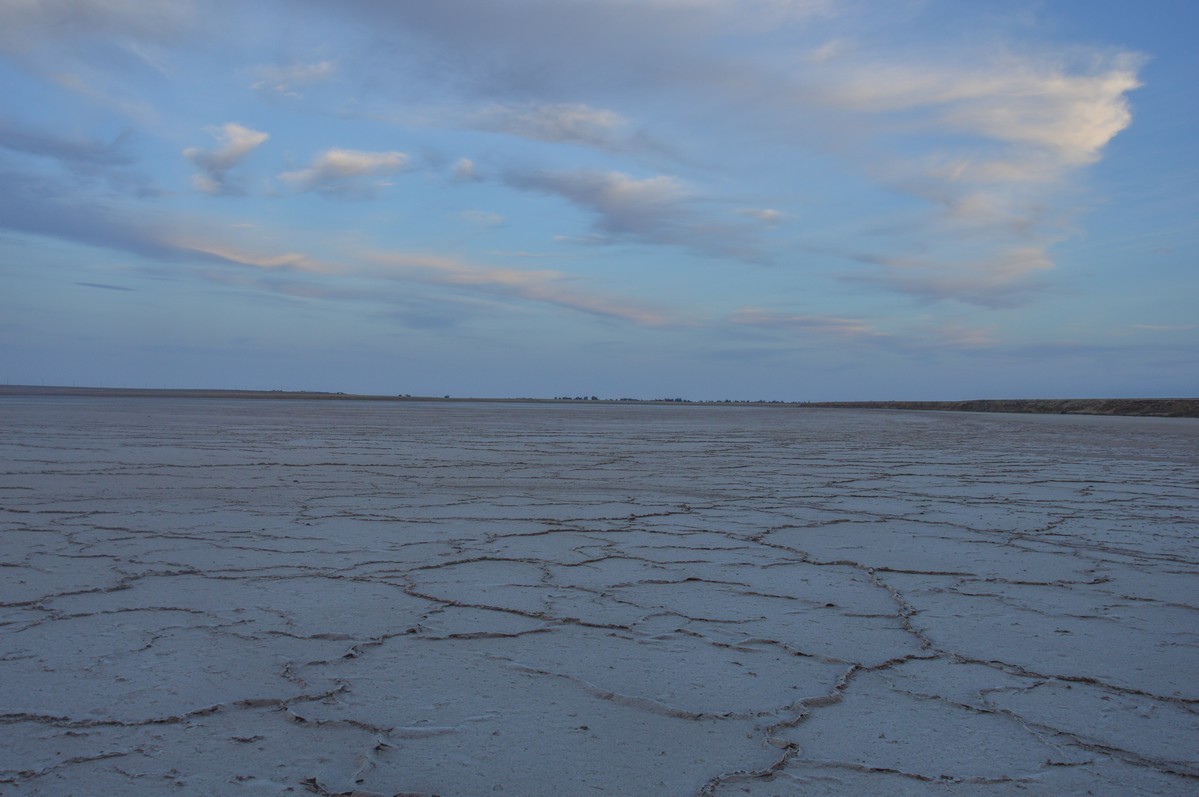 The causes of this desertification are multiple, between climate change and direct actions of man. Under Stalin, a vast project of water canals was undertaken, which led to the detour of rivers and, consequently, the drying up of lakes. This is the case of Koltan-Nur, which used to be made up of fresh water, but is now fed only by rare precipitation and whose composition, like that of many others, has become saline. 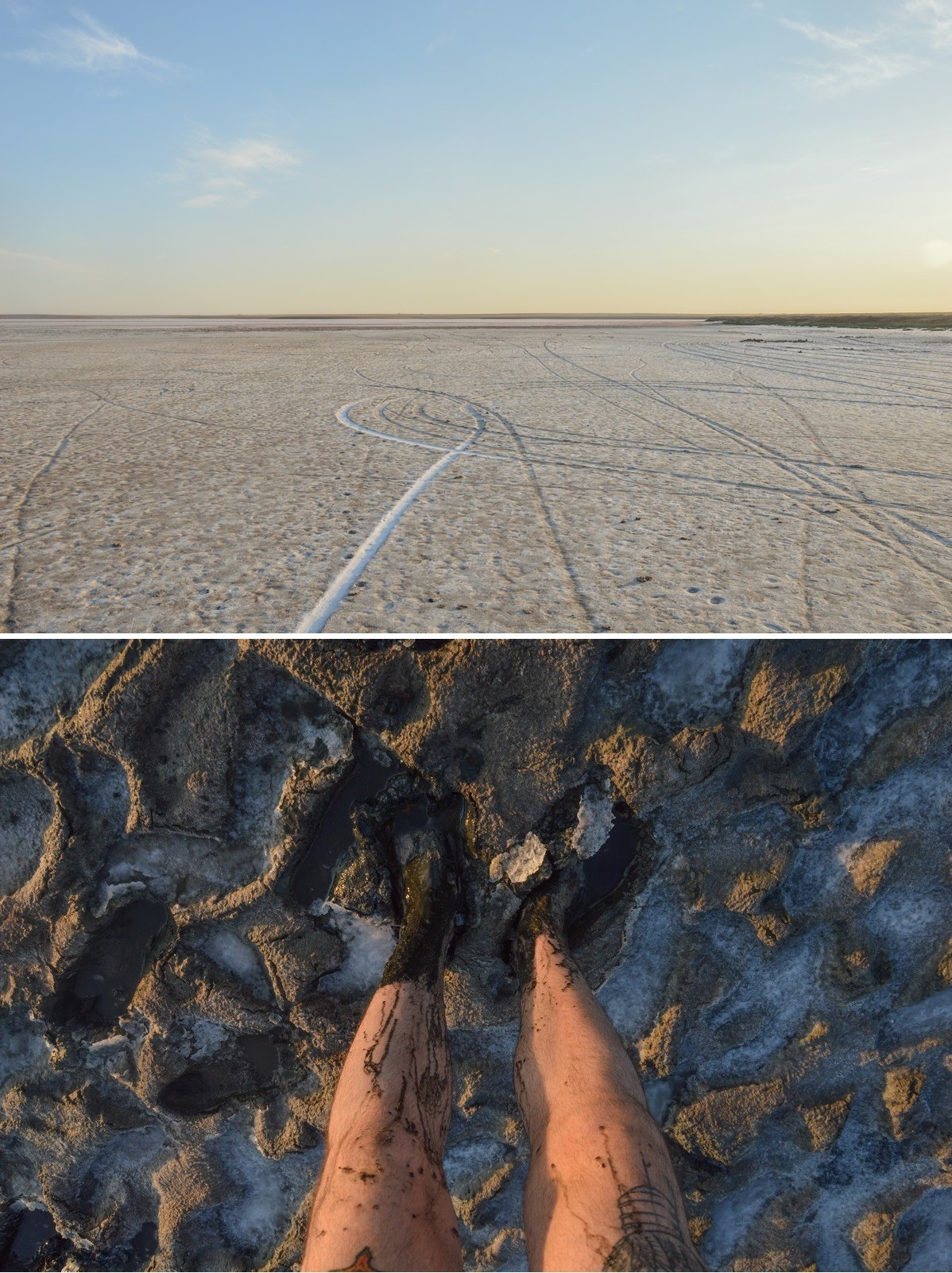 The salt lake of Koltan-Nur. The ground contains a black mud with appreciated curing properties.

These upheavals have considerable effects on the daily life of the inhabitants and on the wildlife. Thus, while some villages are obliged to ration their water supplies by truck, the migrations of birds are strongly affected. 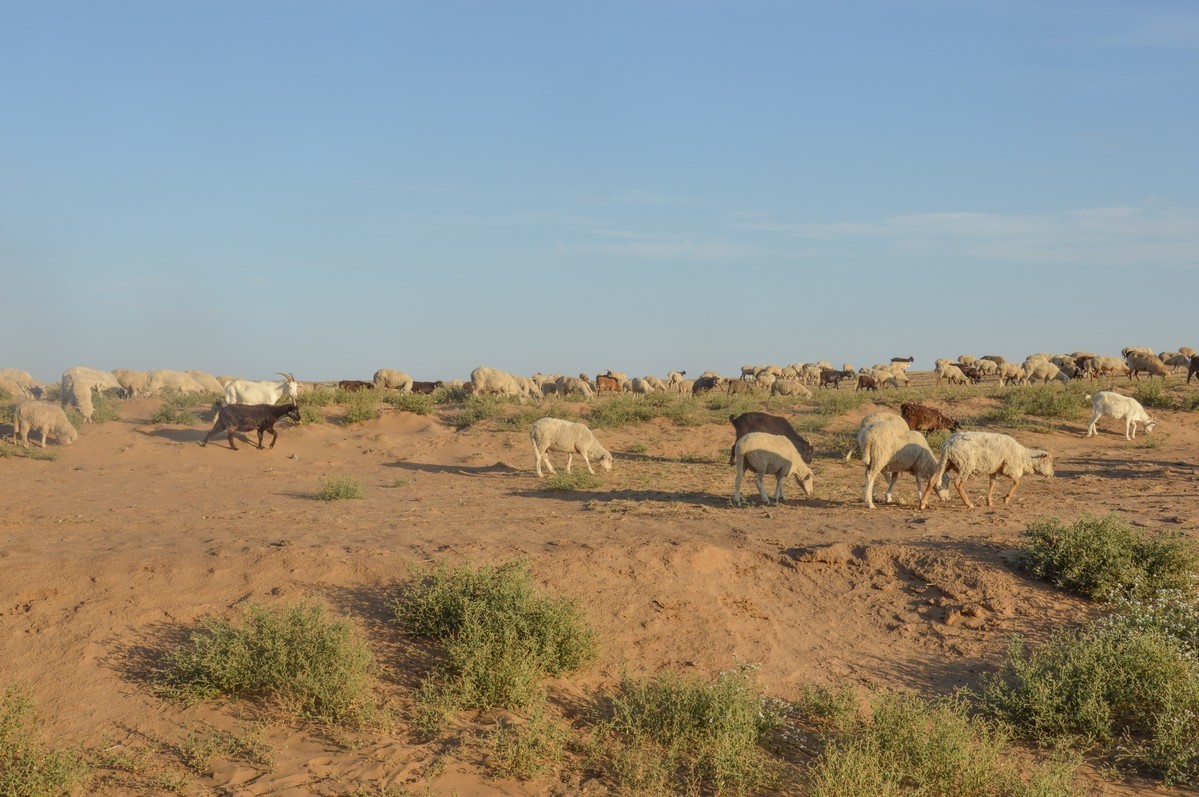 A major traditional stopover on the route of many birds, Kalmykia has been shunned for several years by some of them, due to the reduced quantities of food in the water bodies. Pelicans, for example, numbered only 2,500 in 2020, against more than 4,000 in 2018, explains Yuri, ornithologist of the reserve, while we have been observing for hours already a colony of about ten thousand demoiselle cranes resting nearby. 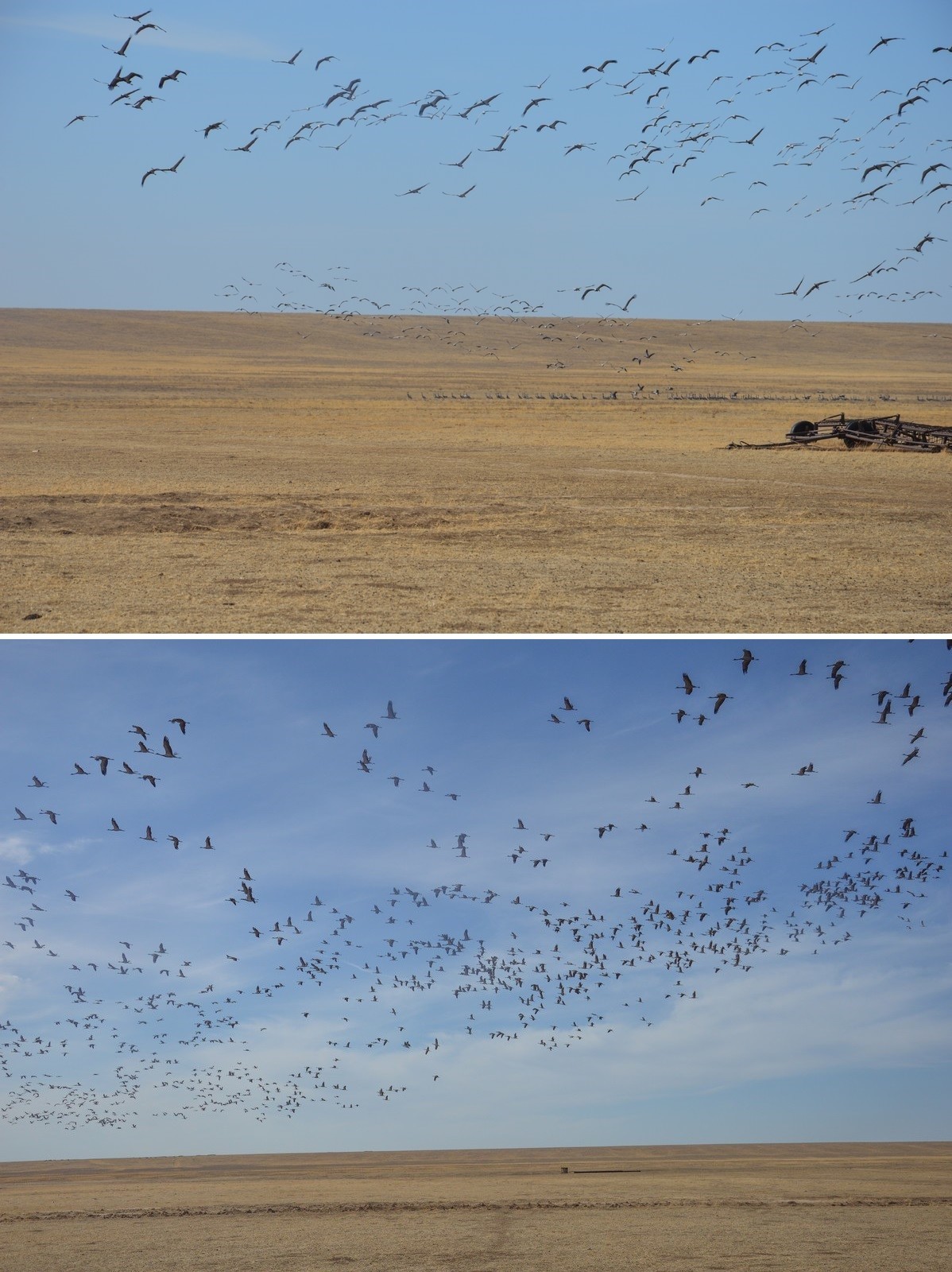 However, the efforts made show that there is room for improvement. If, at the creation of the Black Lands Reserve, 70% of its territory was occupied by sands, thanks to the disappearance of intensive pastures, they have now almost entirely given way to feathergrass, аgropyron, bristle oat and other plants characteristic of the steppes. 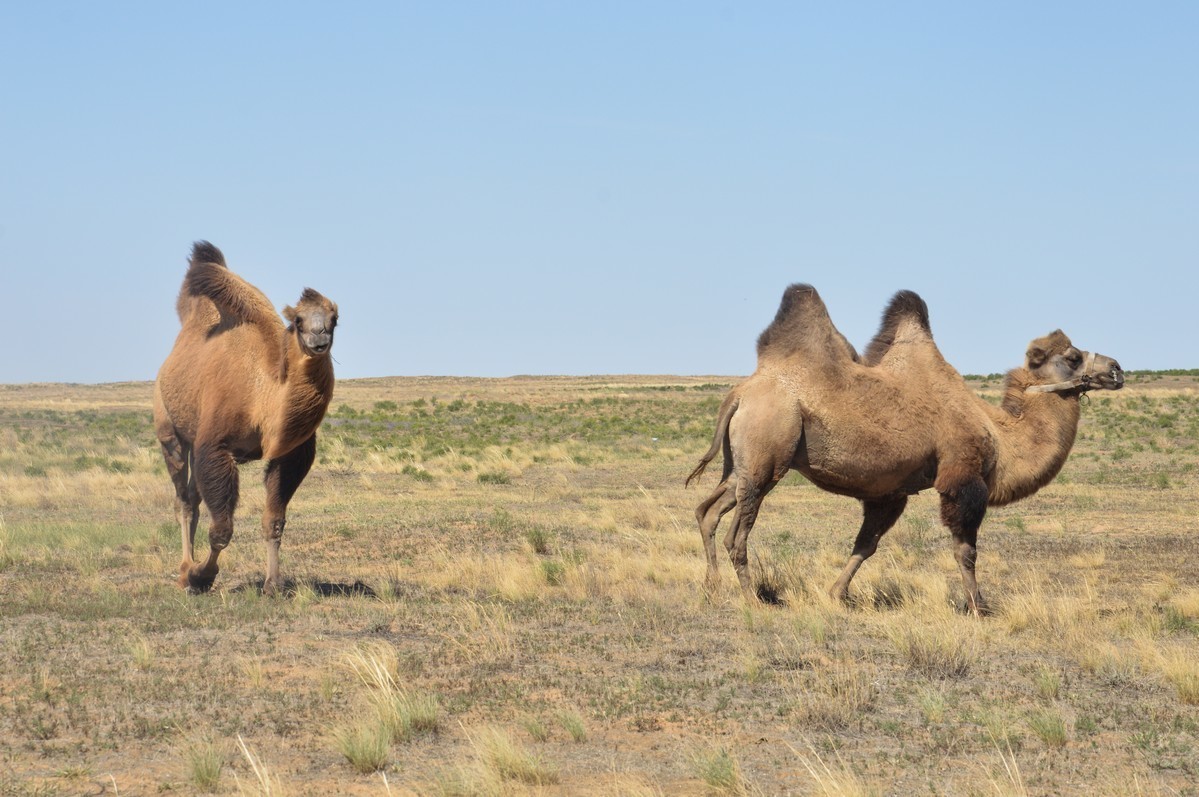 So, as I am about to leave these latitudes to return to my Moscow concrete jungle, I can only wish a “white road”, as the warm Kalmyks say, to these cranes, who, like me, certainly hope to be able to come back again and again to these lands unwittingly fighting for their cultural, as well as natural rebirth.