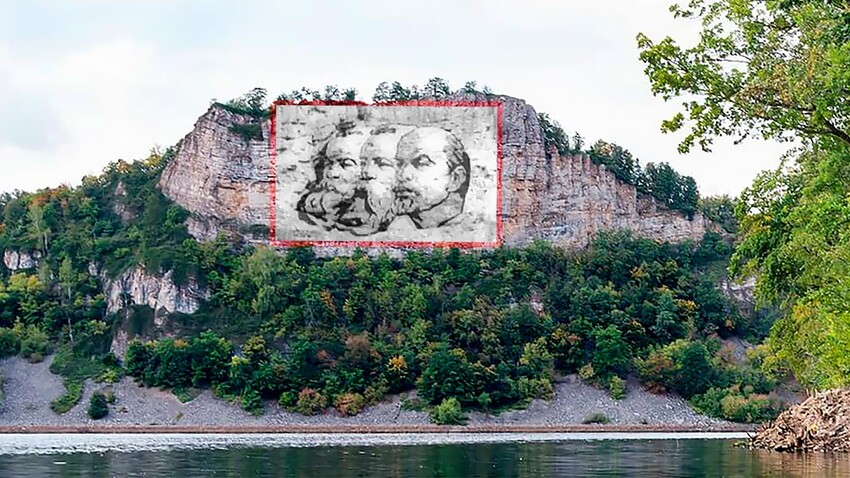 vita-1985 / Wikimapia
How Bashkiria became home to the so-called "Communist answer" to America's Mount Rushmore and what happened to a sculpture of Stalin on the Trans-Siberian Railway.

We do not know exactly how many portraits of Soviet leaders were carved or depicted on rocks because with time many of them fell into neglect or were destroyed. But you can still see some colossal sculptures that have remained intact.

Lenin on Mount Mashuk at Pyatigorsk 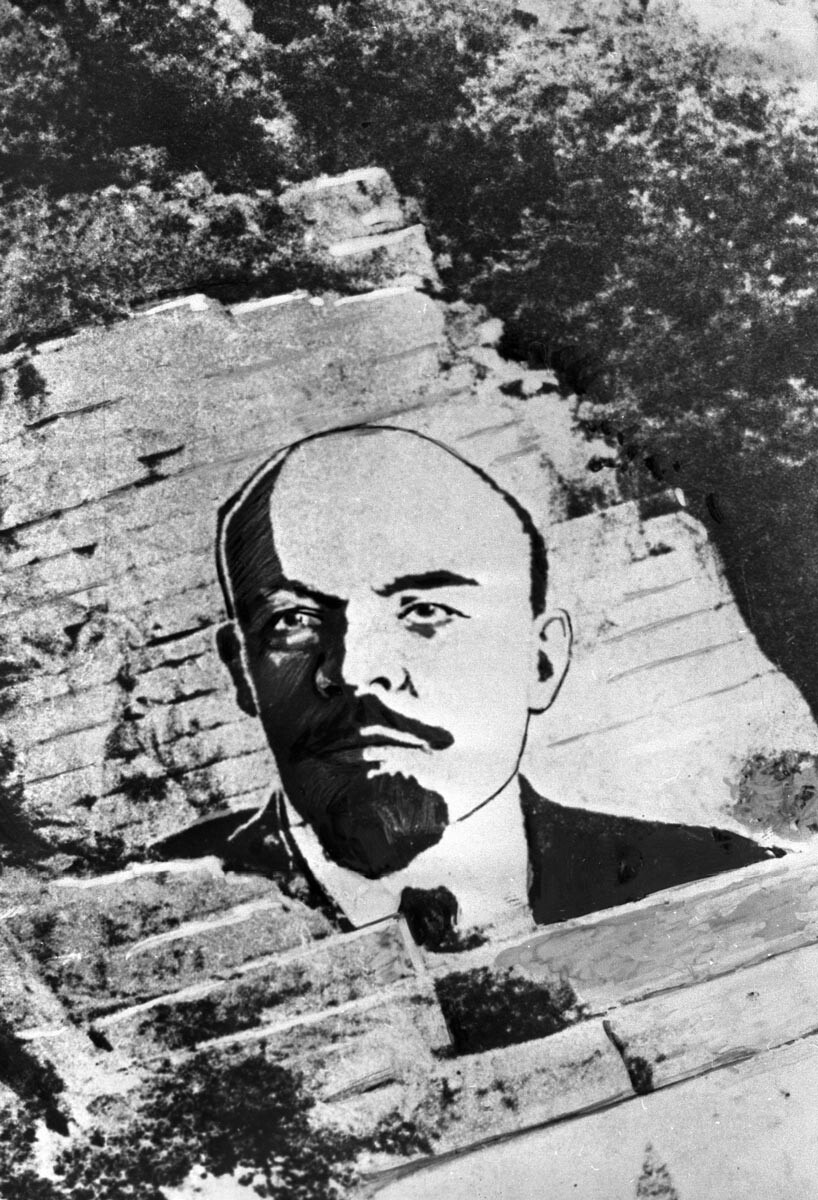 This is the Soviet version of Lenin's portrait.

On the southern slope of Mount Mashuk, next to the spa town of Pyatigorsk (Stavropol Territory), there is a sheer cliff with an enormous portrait of Bolshevik leader Vladimir Lenin. The spot is marked on the map as Leninskiye Skaly (Lenin Rocks). It was painted in 1925 by artist Nikolai Shuklin with the help of two assistants. It took them just six days to complete the job, and the unveiling ceremony was attended not just by local party leaders but also by Clara Zetkin, one of the most prominent German Communists. 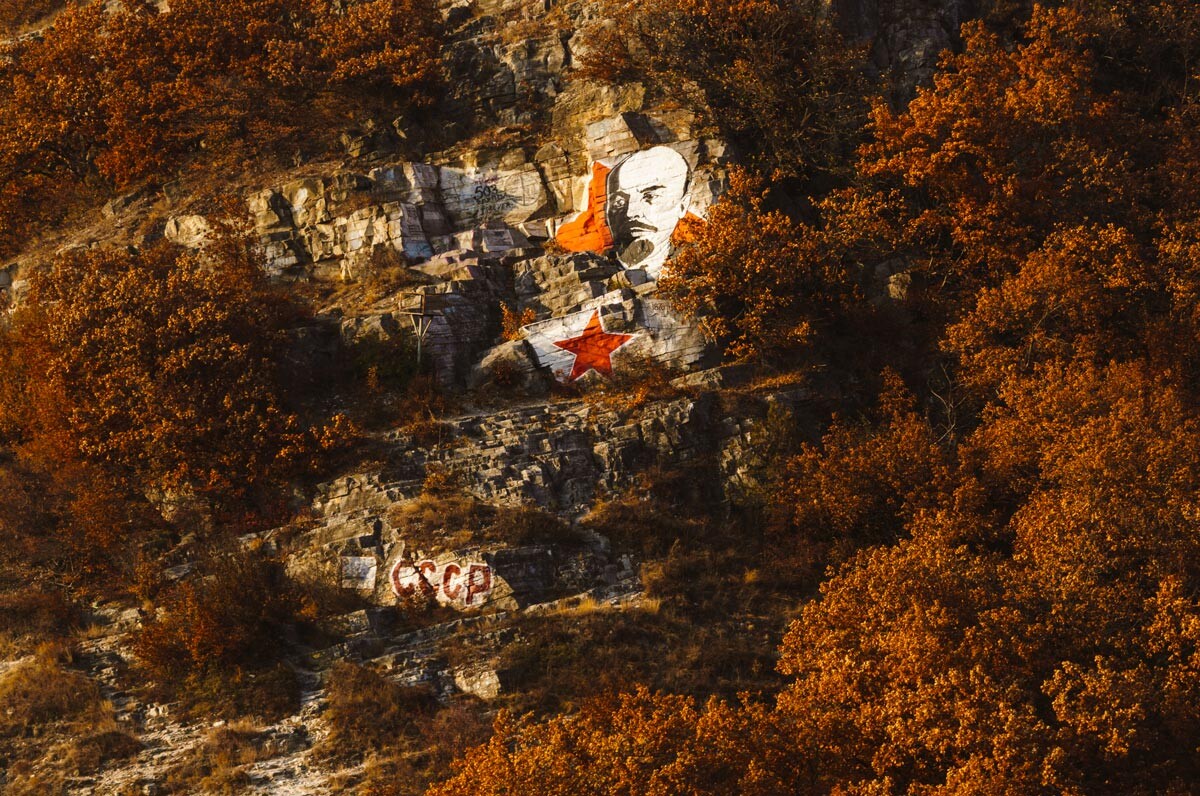 The modern portrait in Pyatigorsk.

The portrait was painted in oil, and the artist returned to renovate the work in 1960. In 2009, it was painted over by vandals, but then in 2018 Stavropol artist Igor Zbritsky restored it. A tourist footpath leads to the portrait and, despite the fact that the last few meters are quite a difficult climb, there are always a lot of visitors up at Lenin Rocks.

Portrait of Lenin in Kislovodsk 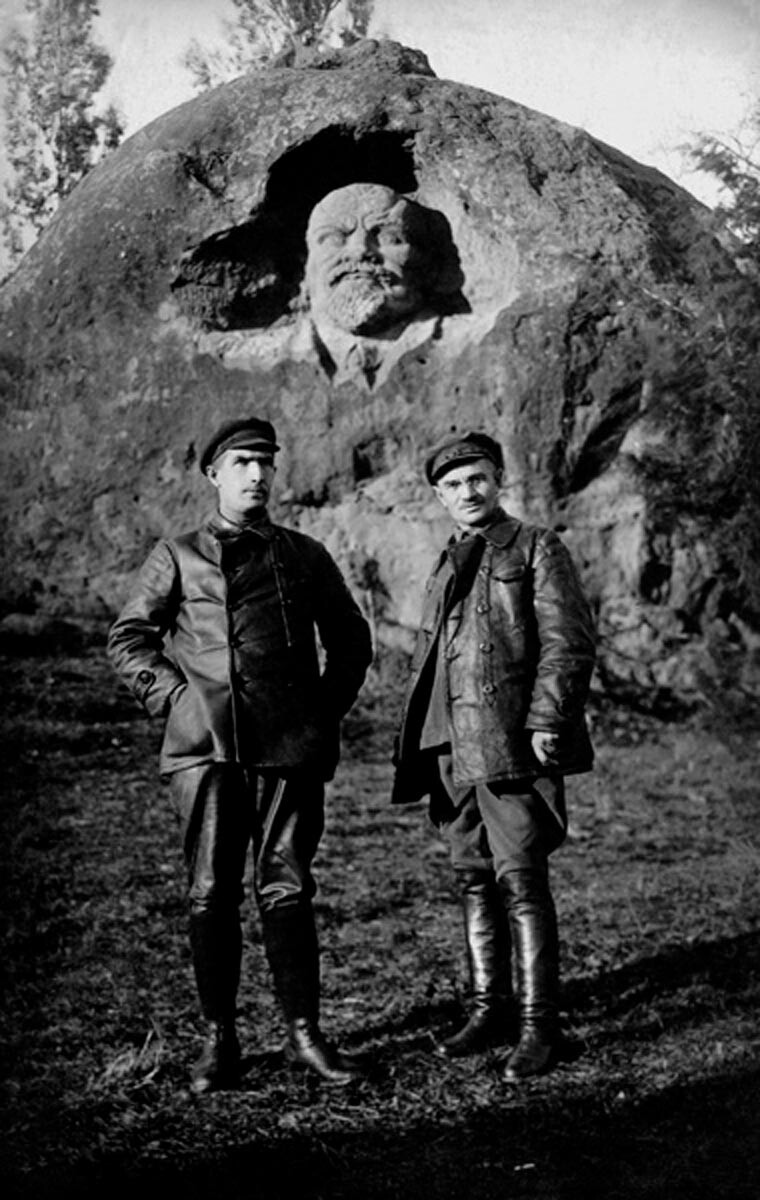 Another rock portrait of Lenin can be found in the neighboring town of Kislovodsk, right in the local park. This bas-relief was executed in bronze in 1927 and attached to rocks that locals refer to as Krasnyye Kamni (Red Stones) since they are made of red sandstone. This is actually the second version of the work. The first was made in 1924 following Lenin’s death, when his portrait was simply carved in the rock itself. However, since sandstone is rather fragile, the portrait quickly began to disintegrate. 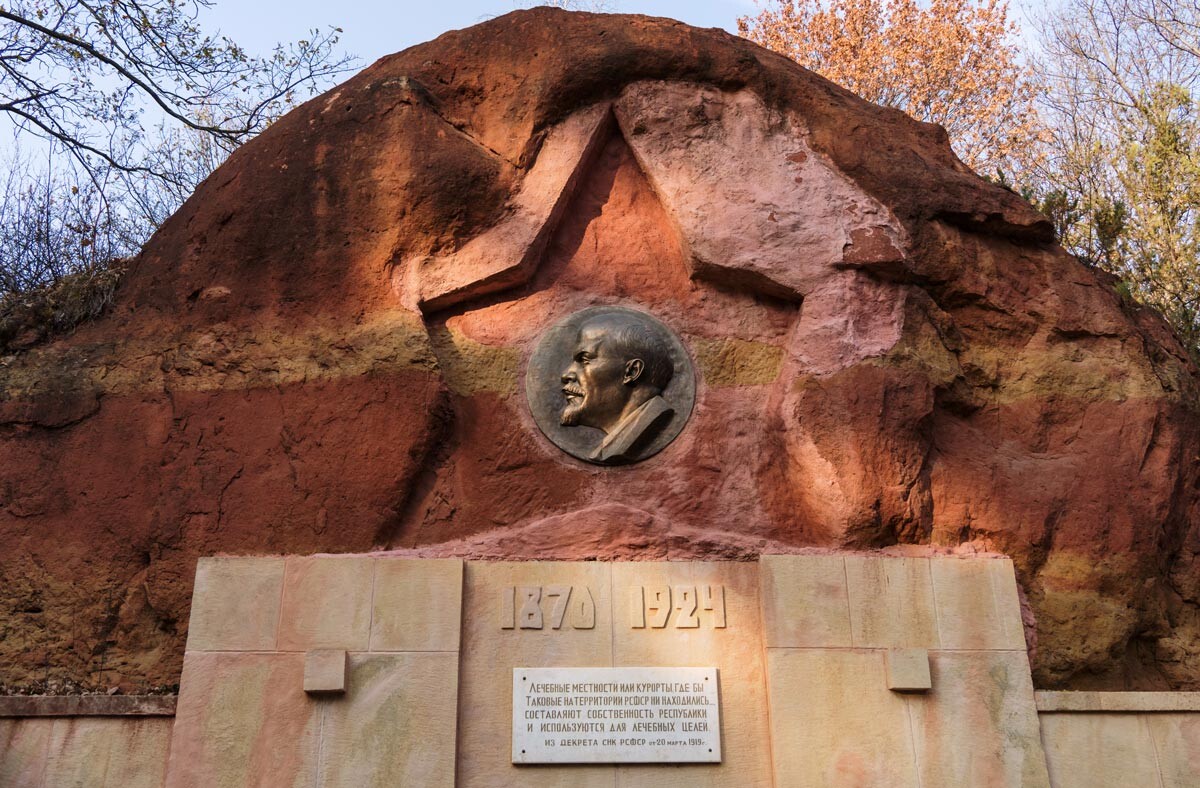 Lenin's portrait that preserved to this day.

It was then decided to make the portrait in bronze, and almost a century later it is still perfectly preserved.

Rock of the Three Leaders in Bashkiria 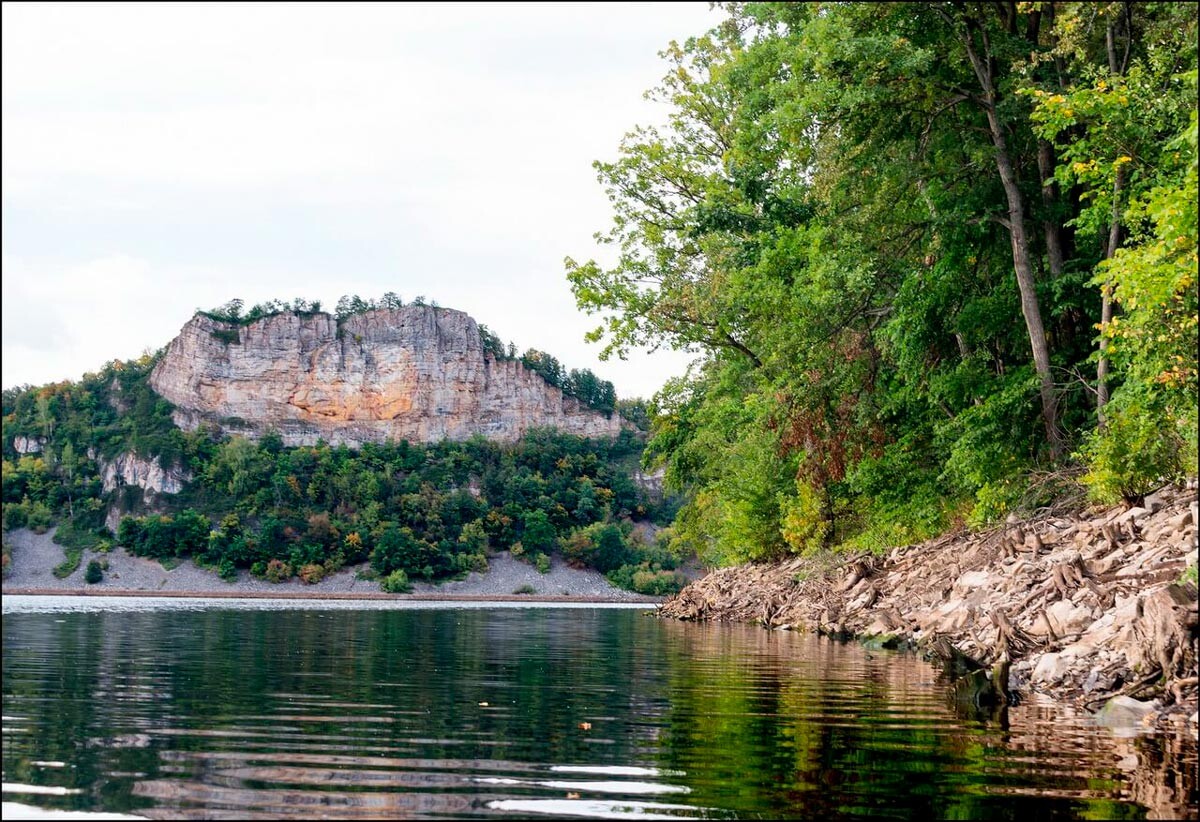 In the Southern Ural Mountains, about 250 km from Bashkiria’s capital city, Ufa, you can find one of the most unusual works of art in the world: a rock with the likenesses of Karl Marx, Friedrich Engels and Vladimir Lenin. Bashkir artist Bulat Rakhimov and two assistants created this Soviet version of Mount Rushmore in the 1970s. They used red ocher for paint since it could be applied without any preliminary preparation of the rock. They did the work suspended from the cliff in "cradles,” and the result turned out to be monumental, with each portrait being the size of an 18-story building! In total, the portraits cover an area 50 meters wide and 70 meters high.

The mountain could be seen along one of popular Soviet tourist routes and so, of course, it quickly gained popular renown. Mount Kyzyltash (which means "red stone" in Bashkir) soon began to be called "Rock of the Three Leaders" or "Rock of the Classics." Over 35 years, the images have faded significantly, but in old photographs the portraits are very clear. 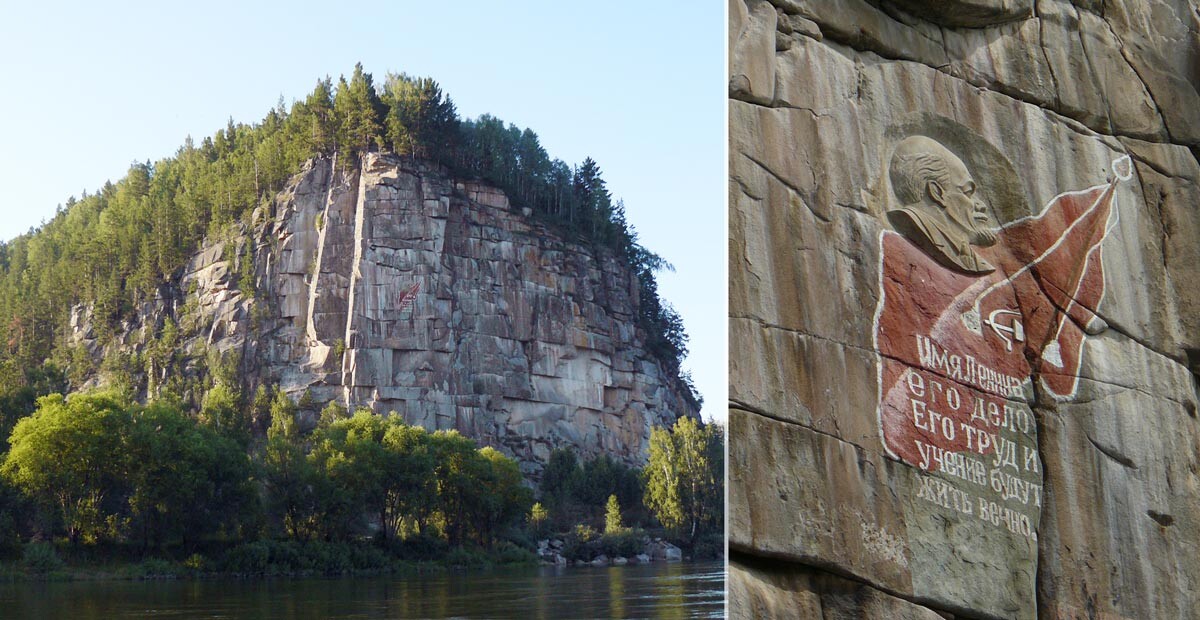 This 80-meter cliff acquired its name because of a bas-relief depicting Vladimir Lenin. It is situated 180 km from the city of Biysk (southern Siberia) on the right bank of the River Biya. The profile of Lenin was carved on the sheer cliff after World War II by Ivan Sychev, a teacher from the neighboring village of Turochak. He was motivated by a desire to leave a memory of himself (or that is how the locals explain what inspired him anyway). Initially, there was also a bas-relief of Stalin, but this was destroyed in 1957. Sychev had to lower himself down the cliff on a suspended cradle in order to perform the work, which took him several weeks to complete.

In the late 1970s, Iconostasis Rock was declared a historically-significant monument of nature. It is protected by the state to this day. 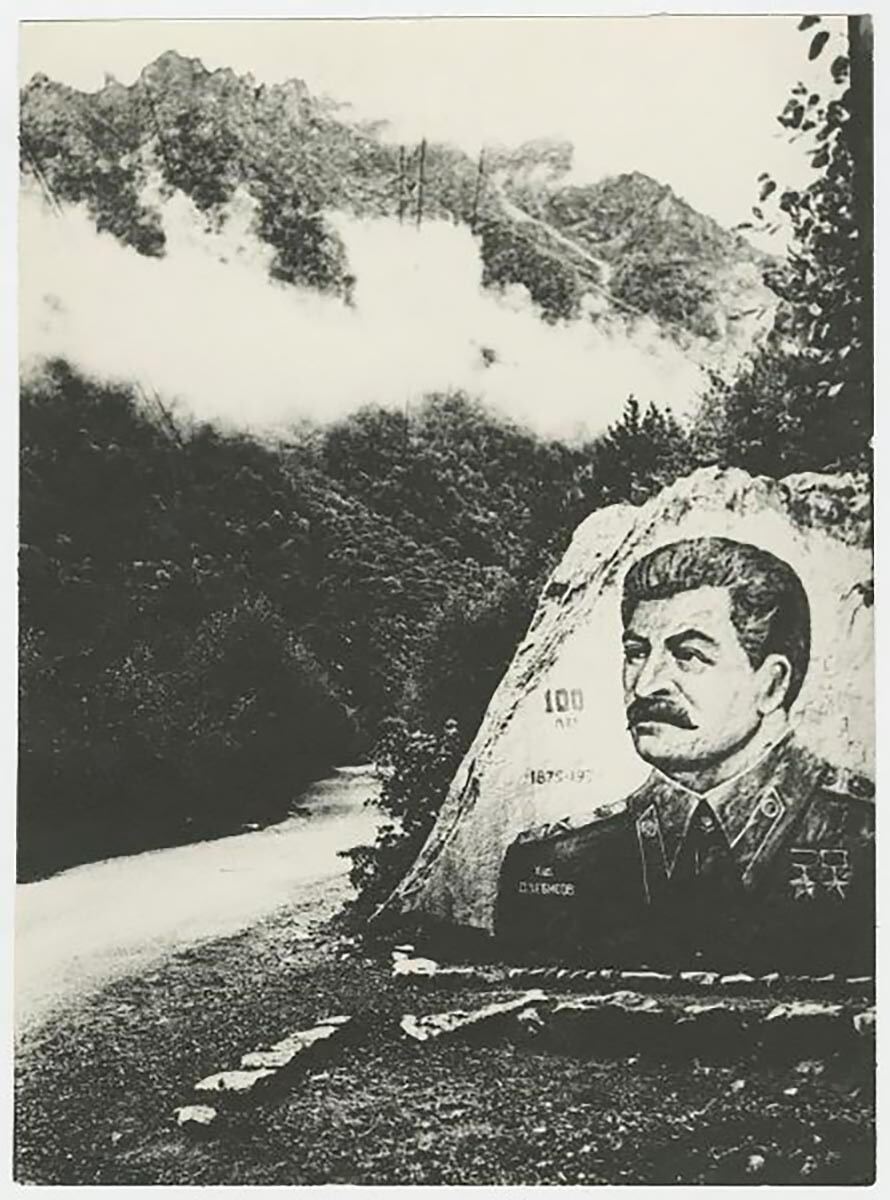 In the Caucasus, a portrait of Joseph Stalin still remains in North Ossetia's Tsey Gorge. The likeness, painted on stone, greets all travelers on the Transcaucasian Highway and depicts the Soviet leader in a reflective mood. On the other side of the same stone you can see a depiction of Ossetian national poet Kosta Khetagurov. The giant stone, situated on the side of a mountain, is around four meters high and is regarded as one of the key sights in the republic. 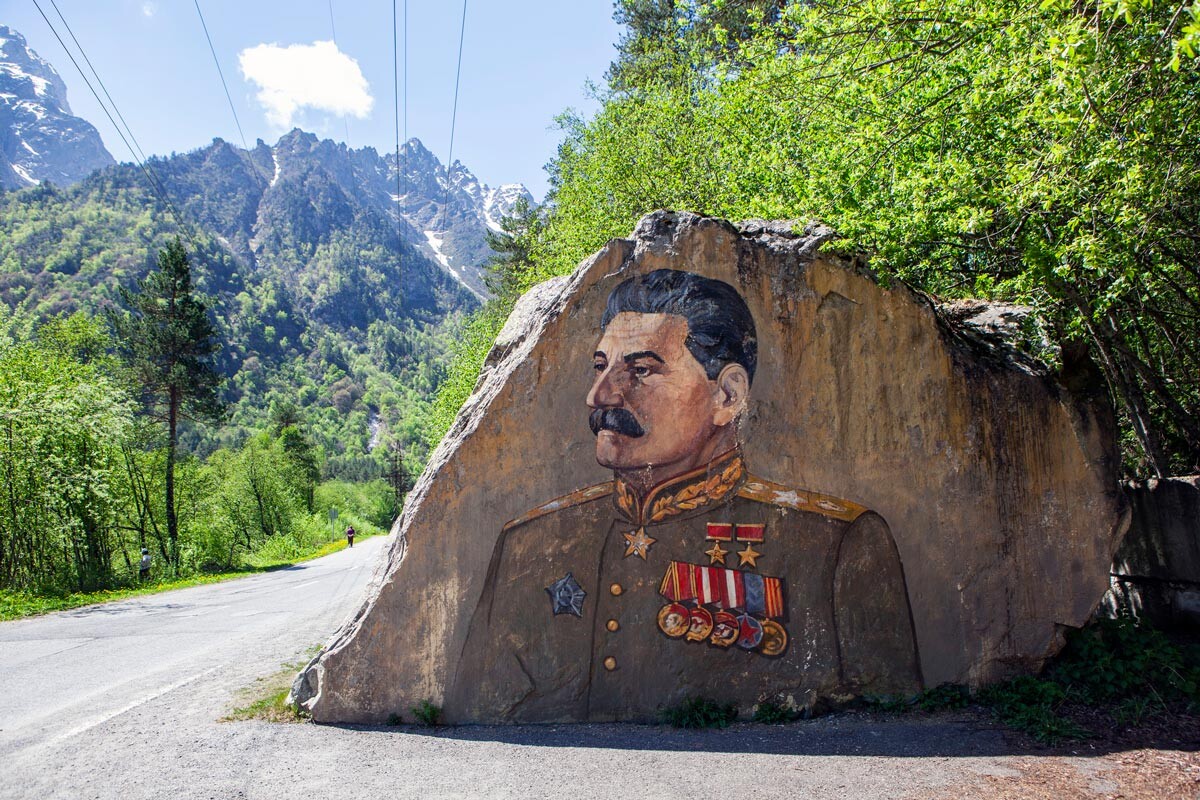 After the denunciation of Stalin’s "cult of personality," monuments to him were demolished, but this one managed to survive. According to one legend, the stone was pushed into the ravine, but some persistent locals pulled it back up again and restored it to its former place. Many locals believe that Stalin had Ossetian roots. 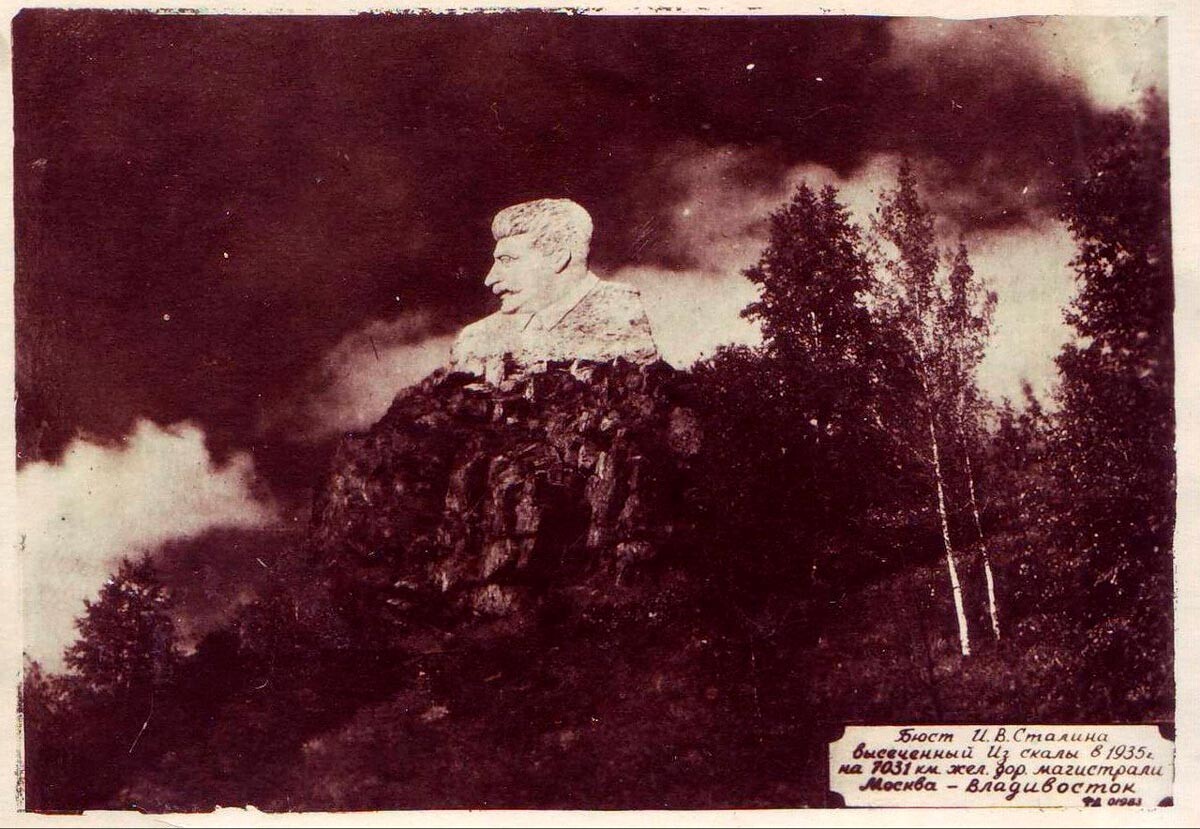 One of the rare postcards with this portrait.

One of the biggest rock portraits of Stalin stood on the Trans-Siberian Railway in the Transbaikal Territory. It was visible from afar as the train approached Amazar Station. The bas-relief appeared in 1935 while the second line of the Moscow-Vladivostok railway was being built. For the most part, its builders were prisoners of Bamlag, the Baikal-Amur Corrective Labor Camp, whose inmates faced extremely brutal conditions. The bust was evidently erected on a 6-meter rock by prisoners on their own initiative, although there is no clear explanation of what their motives were. Some sources suggest it was the idea of one prisoner. Others claim that two or three prisoners wrote to Stalin and proposed making the rock portrait in the hope of getting conditions in the camp eased. According to this version, Stalin unexpectedly agreed and even subsequently pardoned the prisoners. Whatever actually happened, we do know that the bust stood by the railway for around 20 years and, when a train approached the rock, the driver would announce on loudspeakers that the rock could be seen from the windows.

By all accounts, the profile of Stalin was made using reinforcing steel rods, stone and concrete and installed on the summit of the rock. It was around three meters high and was even visible by moonlight. In 1949, for Stalin’s 70th birthday, the likeness was illuminated with spotlights. Then in 1956 during De-Stalinization, the monument was blown up. According to the official account, this was done because it was in danger of collapse. Only some surviving postcards that were sold on the trains and rare photographs remain as a reminder that this bas-relief ever even existed.