My lifelong dream to visit Volgograd, the City of Heroes, came true! (PHOTOS) 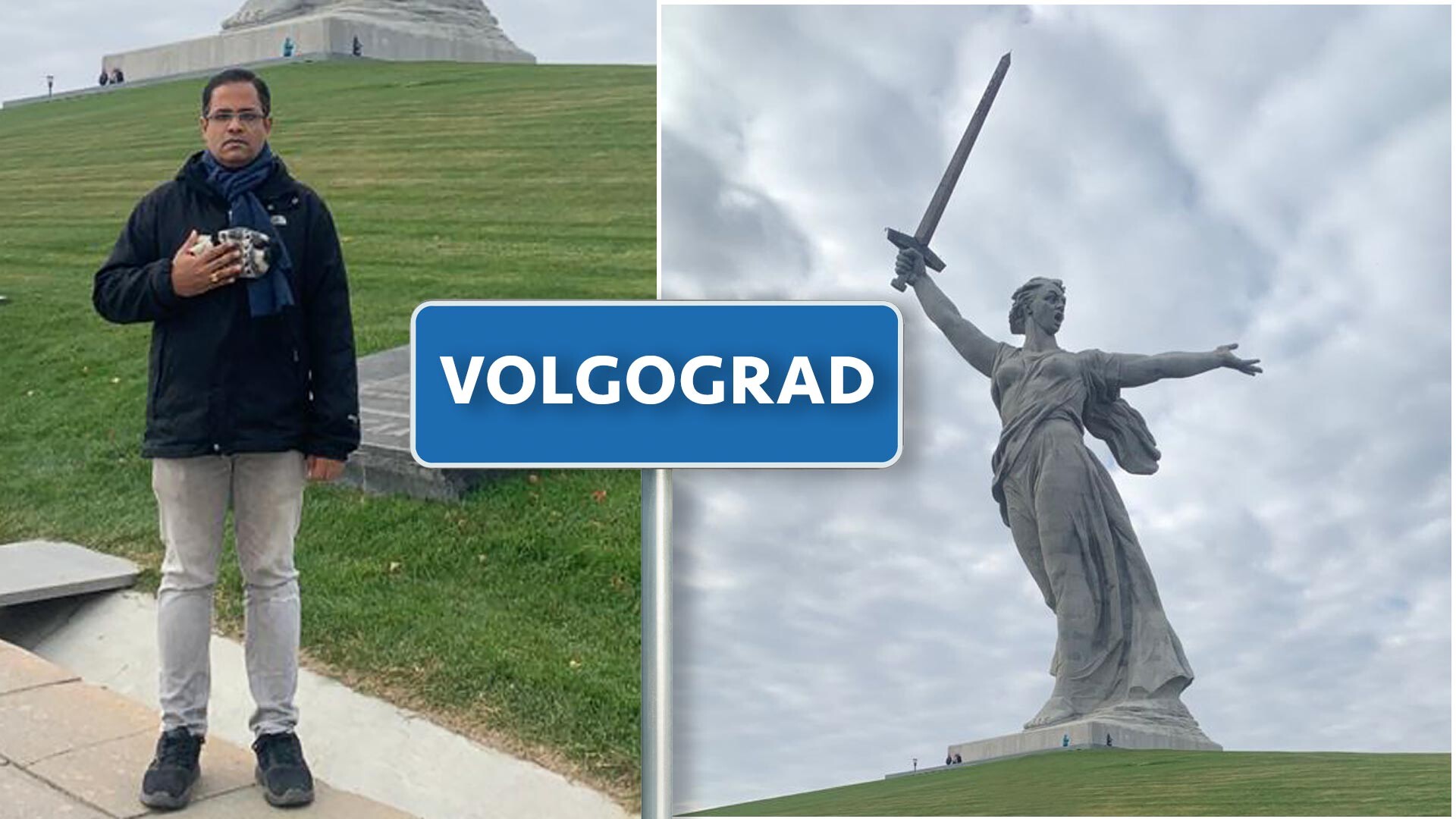 Personal archive
In this latest excerpt from our ongoing travel series, our contributor visits the impressive ‘Motherland Calls’ statue and feels right at home in contemporary Volgograd.

The battle that changed the course of world history

As my six-hour train journey up the Volga River from Astrakhan was coming to an end, I immediately started getting goosebumps. It had been a lifelong dream to visit Volgograd, formerly Stalingrad, the city of heroes and the venue of the battle that changed the course of world history. The only thought that ran through my mind on that cold November night as the train entered the platform was that I was in the same place that was, almost 80 years ago, witness to some of the worst horror of World War II - air raids on civilian targets, deadly close-quarters combat, complete destruction and the loss of two million lives.

The area around the Stalinist-style Volgograd railway station, with its broad avenues and the newly-built Alexander Nevsky Cathedral, has few reminders of those gory five months, one week and three days of 1942-43. 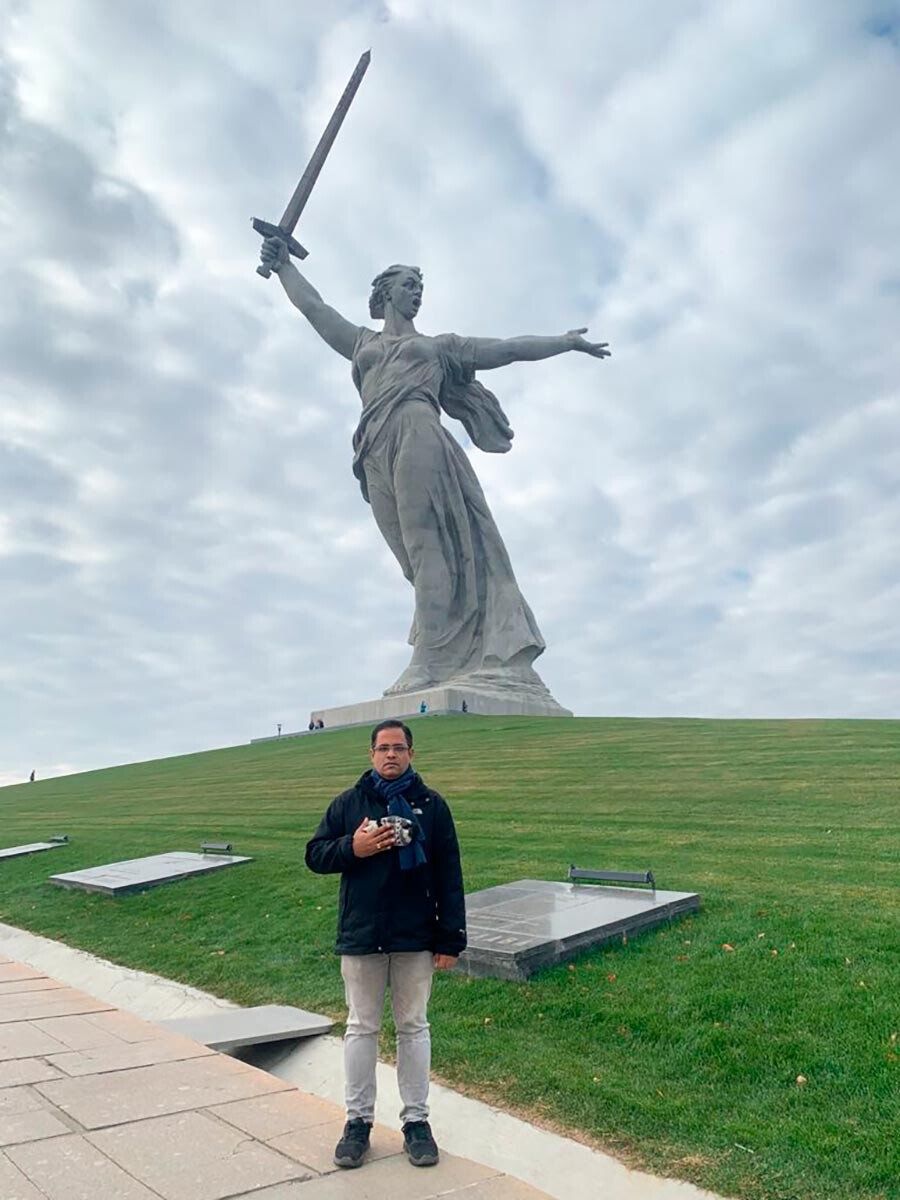 In front of the Motherland Calls monument

I actually got a chance to see ‘The Motherland Calls’ statue from the living room window of the apartment I had rented. It was illuminated at night and stood out like a beacon of light on a cold fall night.

A major sense of overwhelm next to the stunning monument

The early morning greeted us with cold winds, mist and cloudy grey skies, but as we stepped out to walk to the Heroes of the Battle of Stalingrad monument, the sun waged a battle against the gloom and greyness and finally won. How apt for a place that defeated the forces of darkness in 1943!

The entire monument-ensemble at Mamayev Kurgan is maintained with loving care. Volgograd is proud of its role in history and honors those who sacrificed their lives to defeat Fascism.

As we walked up towards the compositional center of the monument - ‘The Motherland Calls’ statue - I felt an incredible sense of being overwhelmed. This 85-meter-tall figure of the Motherland, a woman stepping forward with a raised sword allegorically calling on sons and daughters to repulse the enemy, is one of the most impressive monuments in the world. The work of sculptor Yevgeny Vuchetich and engineer Nikolai Nikitin, it took eight years to construct this monument, which was unveiled to the public in October 1967. 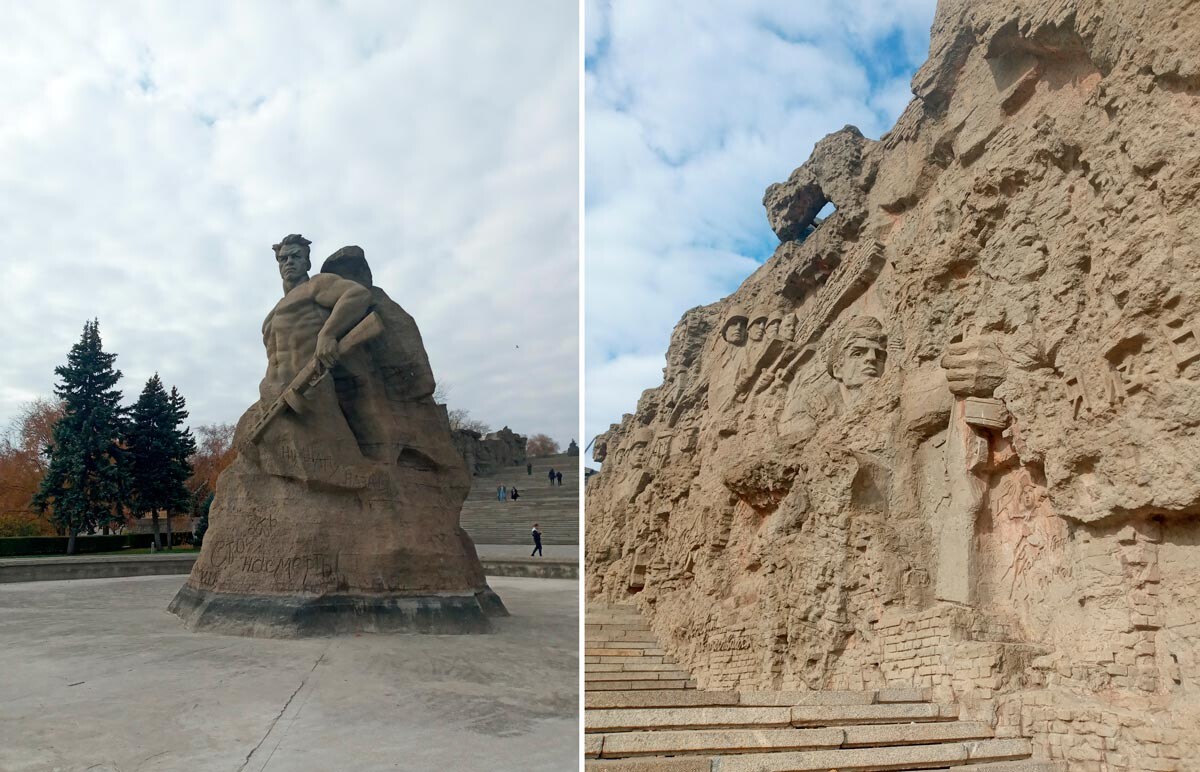 A monument at Mumayev Kurgan

Standing under the protective shadow of the Motherland and looking down at the islands on the Volga, I broke into a cold sweat thinking of the sheer destruction during that period. My mind began to generate images from war correspondent Vasily Grossman’s socio-realist novel ‘Stalingrad (For a Just Cause)’. It was the sheer courage, grit, iron will and determination of the Soviet people that altered the course of history and saved the world from an evil genocidal regime.

‘The Motherland Calls’ monument is not a spot for enjoyment, but a place for quiet reflection on one of the darkest periods in human history. A place where gratitude can be expressed for those who laid down their lives for humanity. At the same time, in 2021, one has to wonder whether the world has learned any lessons from the dark 1940s.

As we walked down from the top, I overheard a teacher explaining in detail to attentive school children about the twin evils of bigotry and hate. May those children see a more humane world when they’ve grown up. Emotionally drained, we set out for a quiet lunch in a city.

City rebuilt after the war

Volgograd, which was called Stalingrad from 1925 to 1961, rose like a phoenix from the ashes after World War II and is now one of the most pleasant cities in European Russia. Like most cities rebuilt after the war, Volgograd has broad streets and tree-lined avenues. Life in the city, which has just over a million inhabitants revolves around the Volga riverfront. 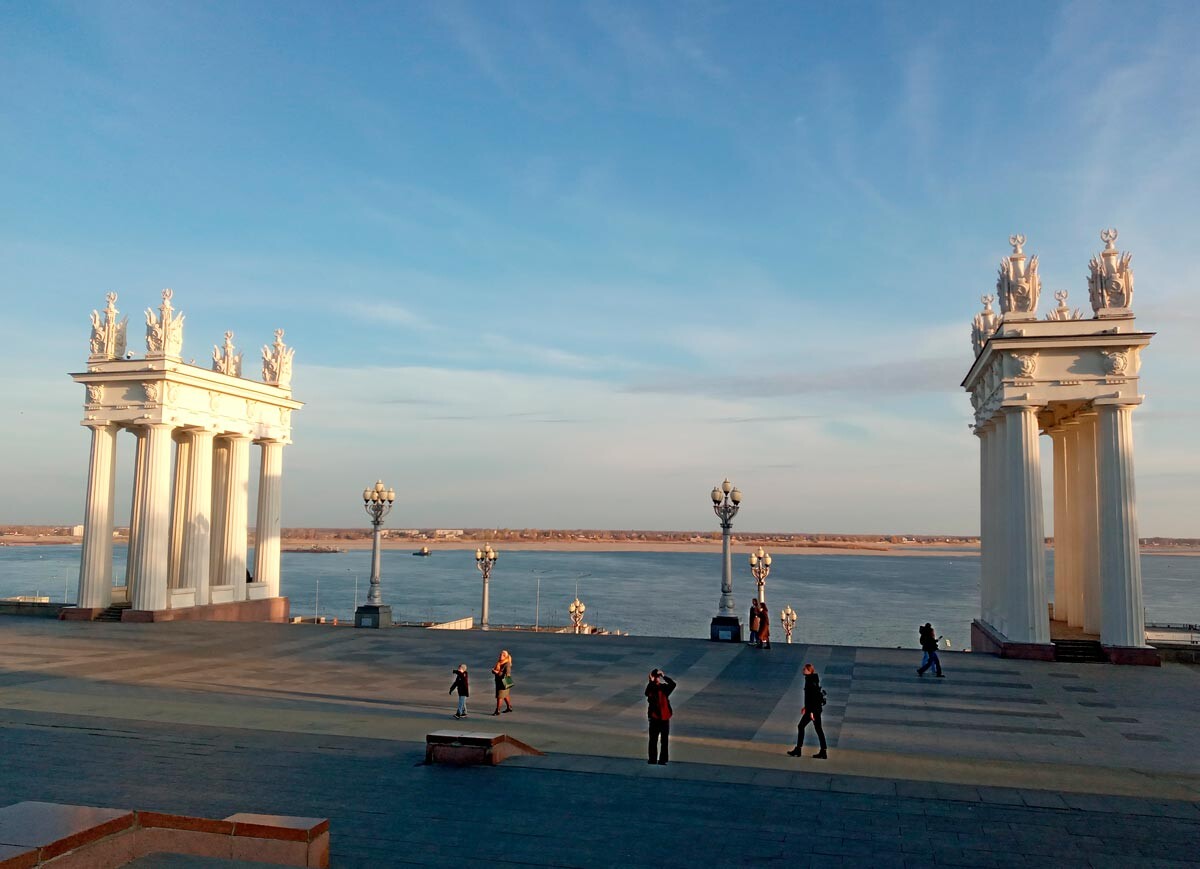 Being a public transport enthusiast, I checked out the city’s trademark trolleybuses, as well as the so-called metrotram. The latter, which links the northern and southern parts of the city, is the best way to see Volgograd. It is extra convenient for tourists, since the line runs close to Mamayev Kurgan and connects it with the city center. 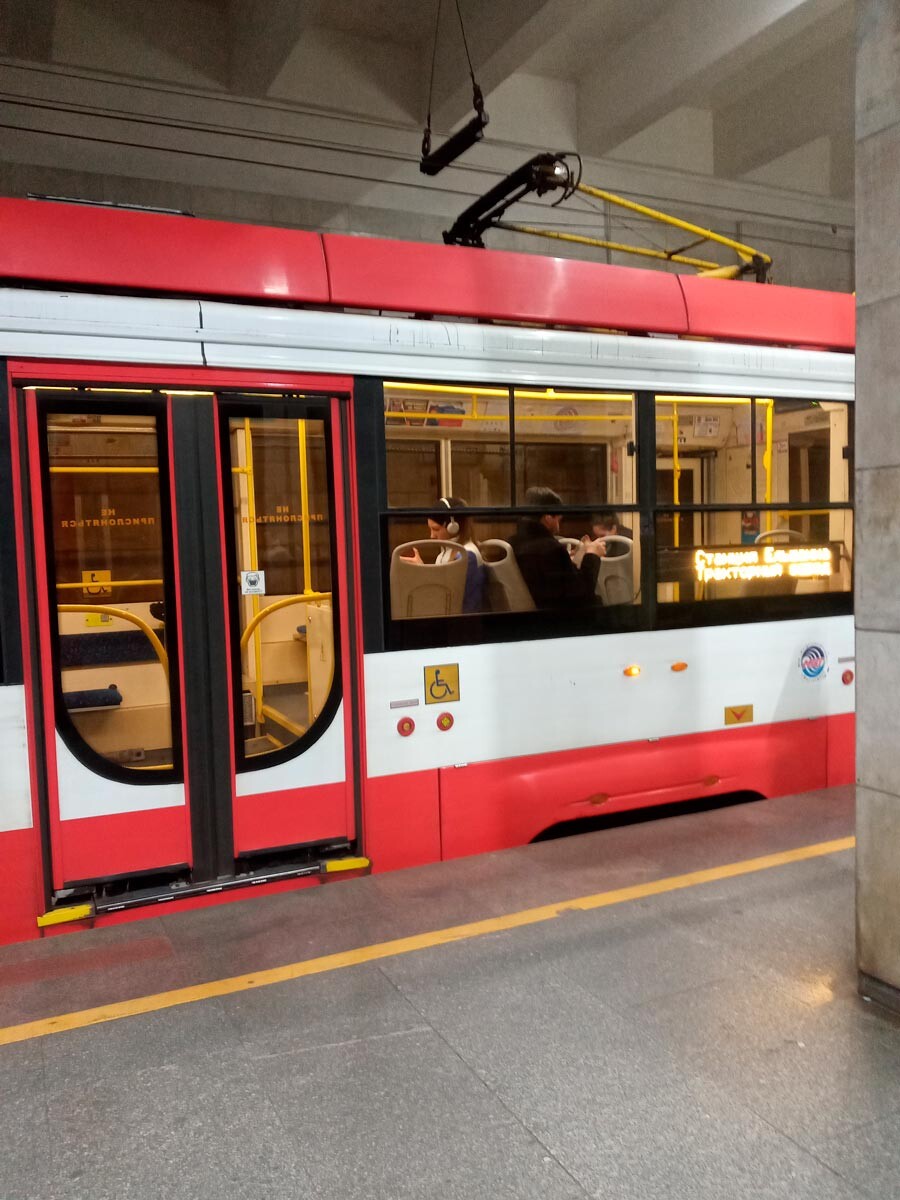 This is the only tram network in Russia that has an underground section. The nearly seven-kilometer long underground part of the network runs under the city center and operates like a metro. There are similar underground light rail systems in cities like Boston and Dusseldorf.

Volgograd’s public facilities, streets and infrastructure got a major upgrade before the 2018 FIFA World Cup. The Volgograd Arena, which is on the bank of the Volga, was built for the tournament and received a major thumbs up from football fans.

Almost all the buildings in the center were built after the war, but signs of the Battle of Stalingrad do exist. One lasting monument to the fighting in the city center is Pavlov’s House, a recreated brick wall that marks the location of the building where Red Army defenders held out for 60 days against Wehrmacht forces. The platoon that seized the building was commanded by Sergeant Yakov Pavlov, and hence the name. The brick wall is attached to a newer building that came up where Pavlov’s House stood. It is now one of the main symbols of the defence of Stalingrad.

Close to Pavlov’s House is the Battle of Stalingrad Museum complex, most famous for its 360-degree painting of the battle. It is a must-see for those who are interested in World War II and houses several military exhibits. To get an understanding of how the city must have looked In 1943, all you have to do is look at the shell of an old mill in the compound that was destroyed during the fighting.

Exploring the broad boulevards of Volgograd

I spent a lovely fall afternoon in the city center, which has pedestrian friendly areas and expansive and green public spaces. The massive Byzantine-style Alexander Nevsky Church, which is close to the railway station, is one of the new landmarks of the city center. It is a replica of a cathedral that was demolished in 1932. 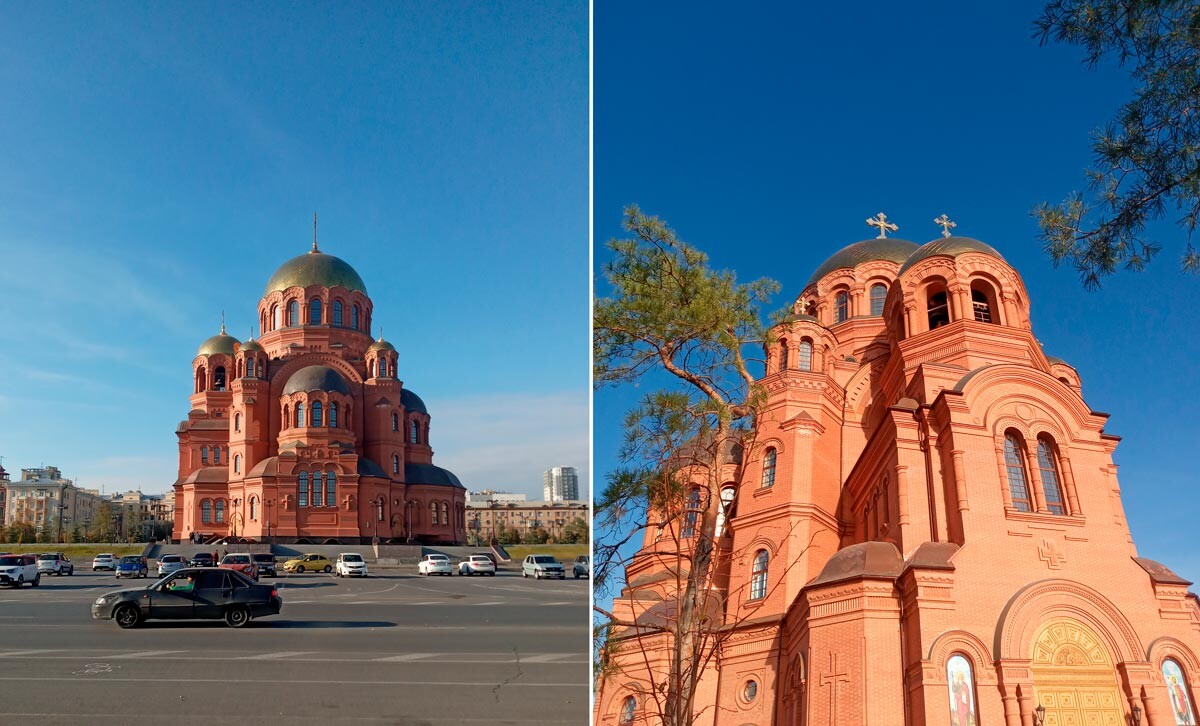 Unlike some cities, where the areas around railway stations are full of anti-social elements, the neat and orderly heart of Volgograd is something that its residents take great pride in.

With coffee to go, I explored the broad boulevards and grand public buildings of the city under the warm fall sun. The very fact that the areas that were destroyed by the fighting are now home to beautiful architecture in a visibly prosperous city is a tribute to those who died to defend it.

Also in the city center is the Alley of Heroes that leads to the riverfront promenade, easily one of the most picturesque in Russia with its pavilions and viewpoints.

Volgograd’s city center is on the west bank of the Volga, so you can’t see a sunset by the river, but there is a one-hour cruise that gives you very good views of the city. I managed to get on the boat just before sunset. The colors of the skies in the city during the brief period from sunset to dusk could easily figure in an Isaac Levitan painting. 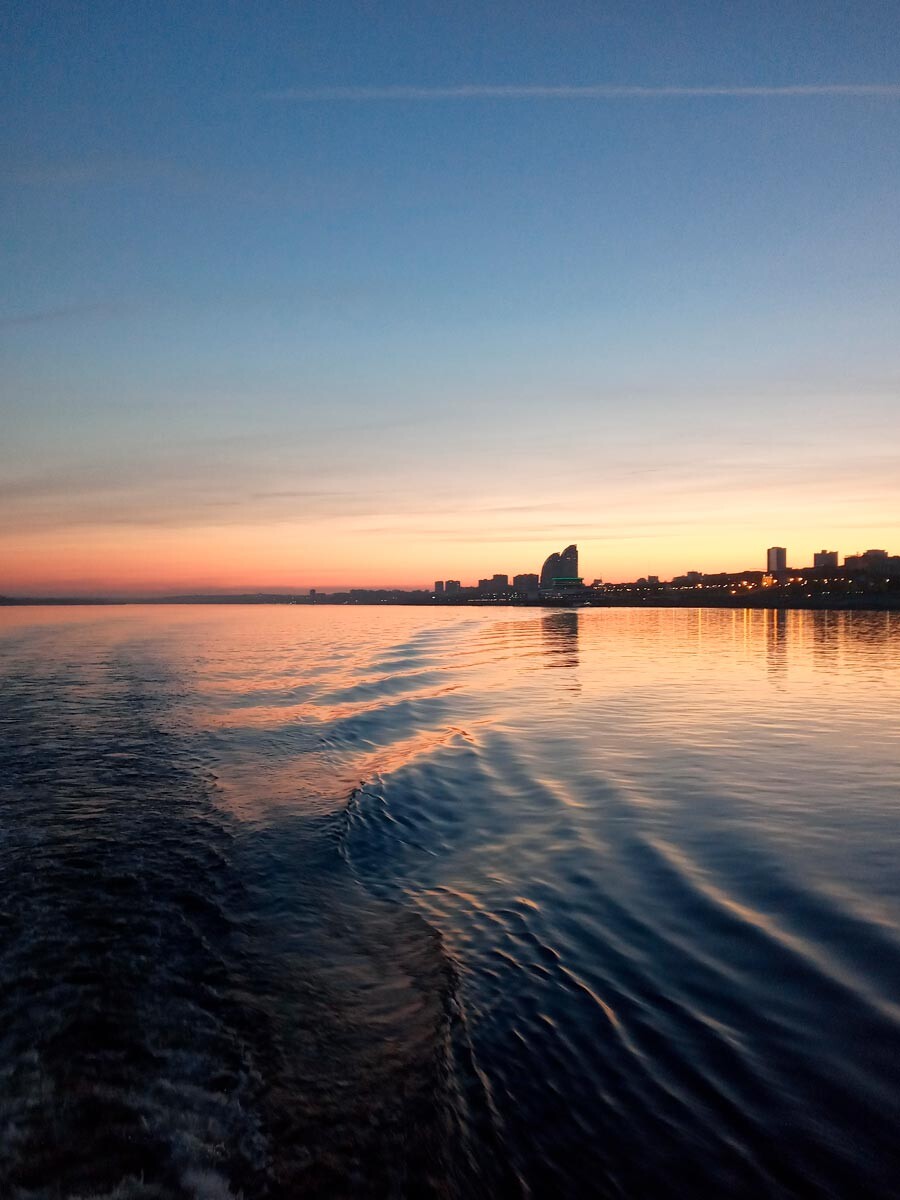 Cruising on the Volga

As I stood on the deck of the ferry and witnessed twilight give way to the black of the night, I saw the lights of a confident and prosperous city that took pride in its role in history, but was looking firmly ahead towards the future! 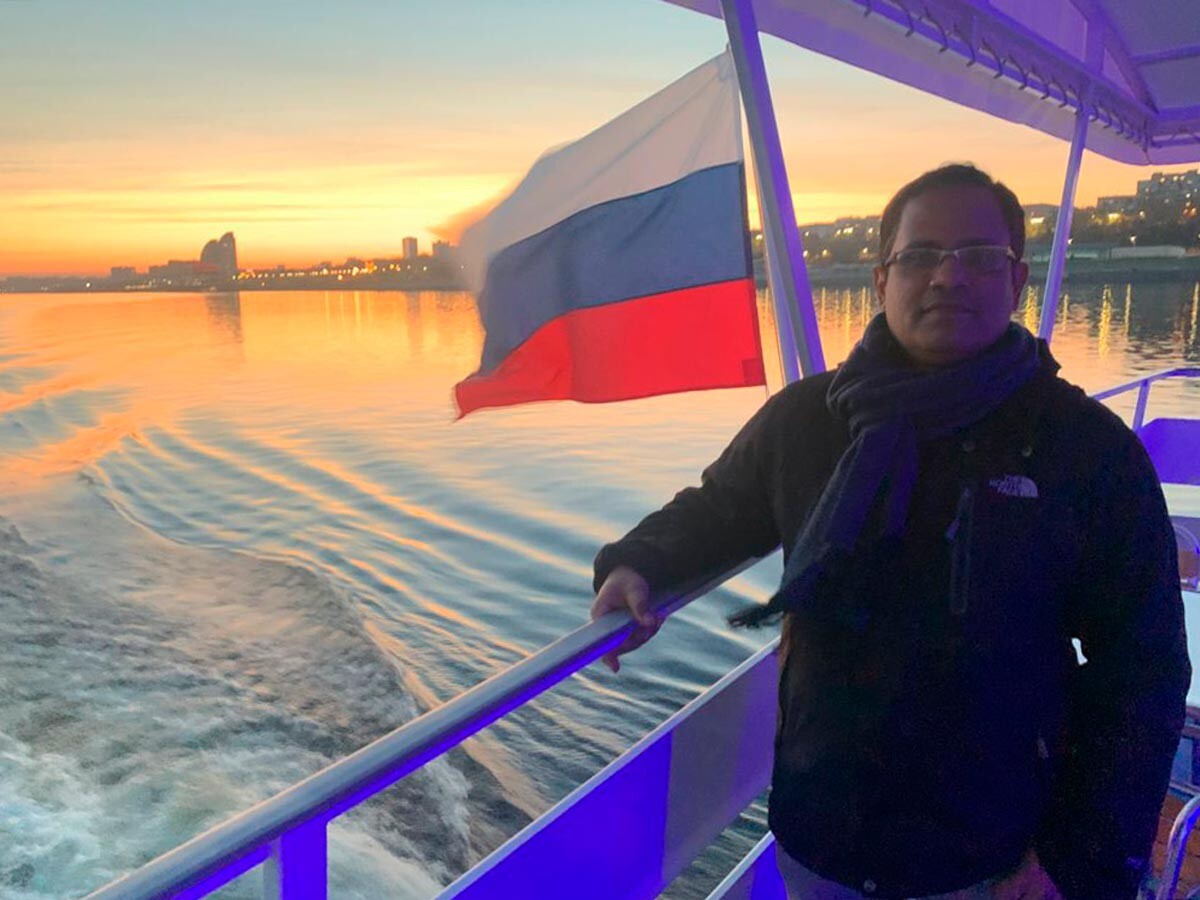