What can you see from a car window in Chechnya? (PHOTOS) 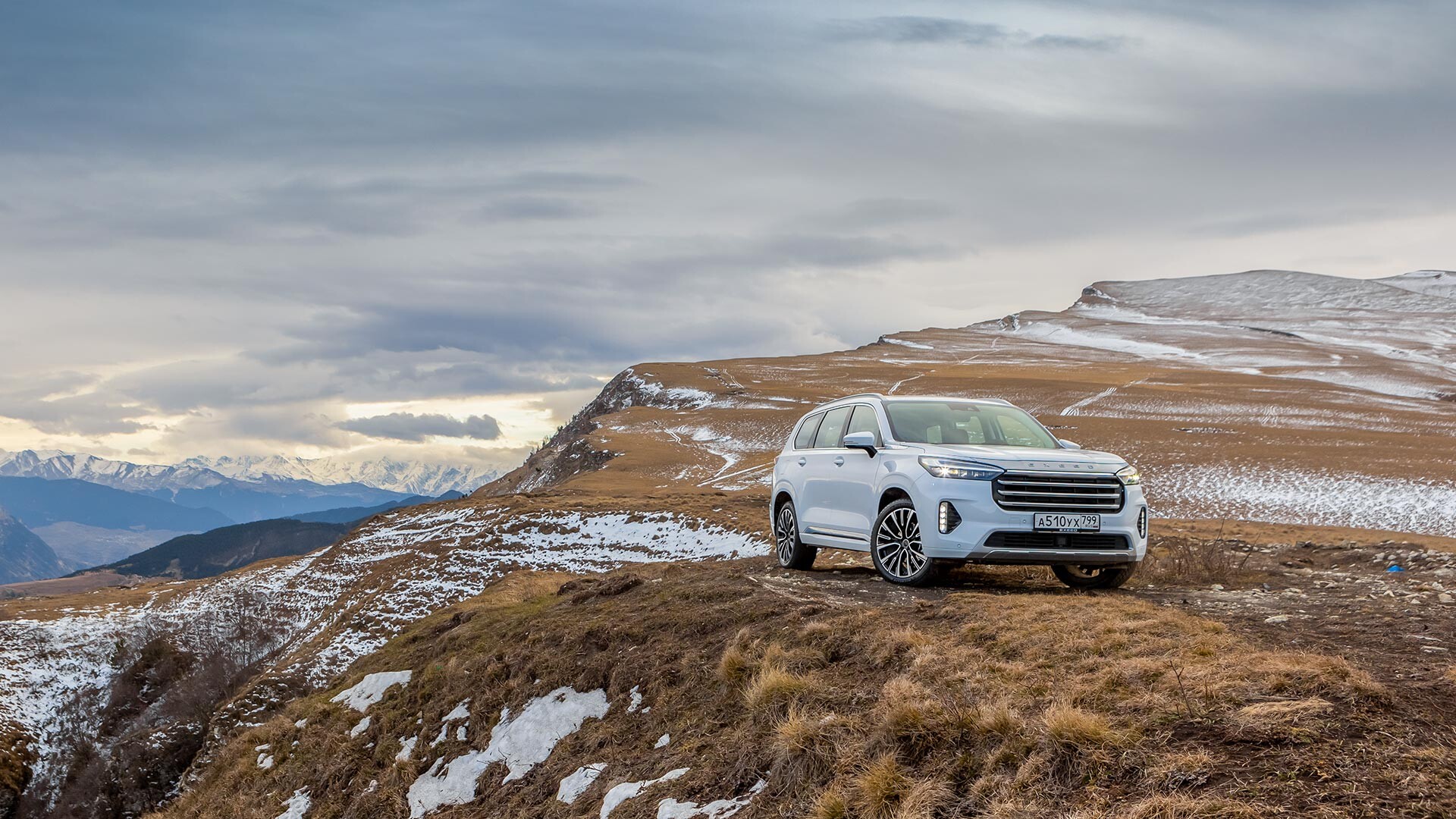 Exeed Press office
The Chechen Republic is a fairly new destination even for domestic Russian tourists. One of our authors shares her impressions from a trip there.

We drive up to a checkpoint in the mountains and stop, slightly perplexed. Bearded men in camouflage uniforms carrying assault rifles walk towards us. One of them leans right up to the car window and, hearing that we are journalists, smiles broadly and asks with absolutely childish curiosity: “What kind of car is this?” 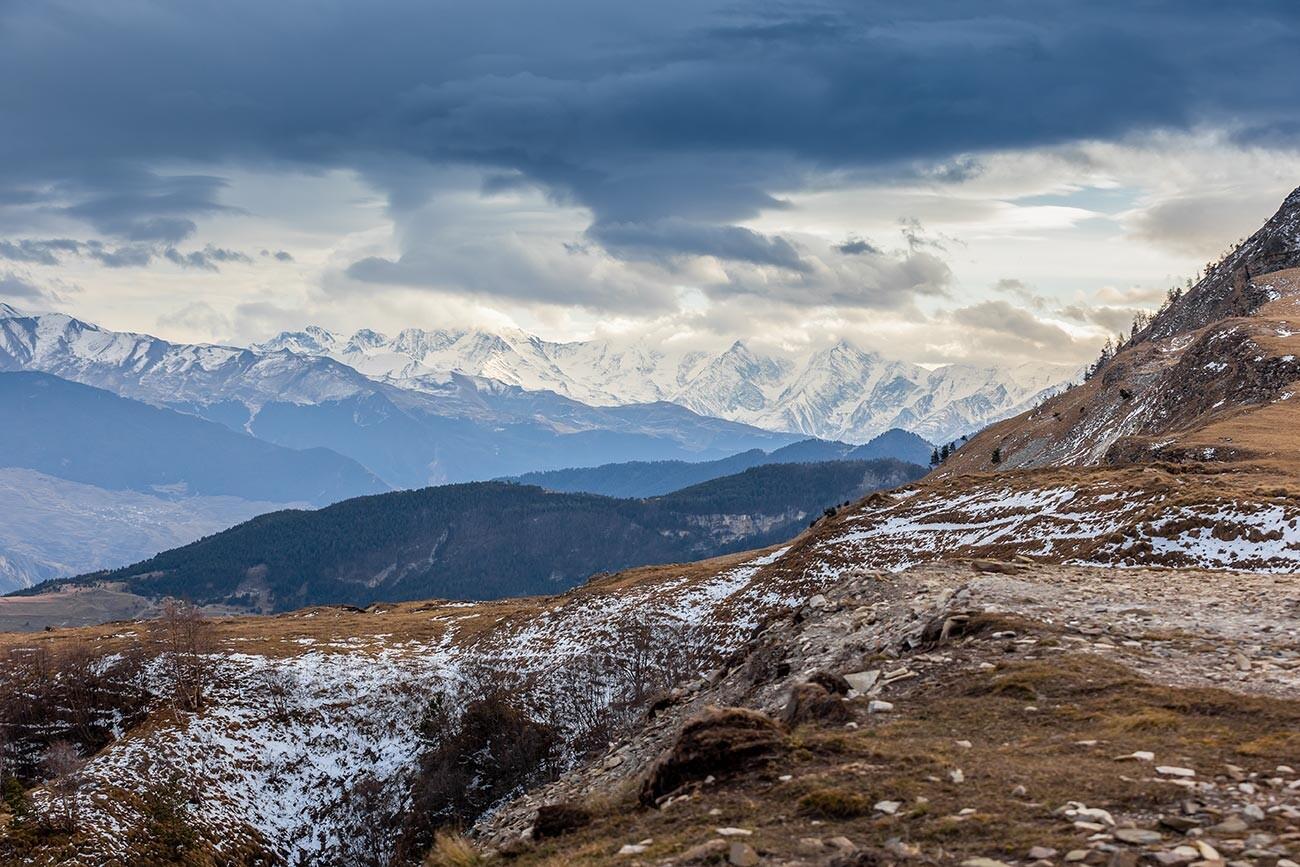 On learning it is a brand new Exeed VX Chinese-built SUV, they click their tongues in admiration, asking about its road handling and whether it’s expensive. For a couple more minutes, they continue to examine it with curiosity and then let us go, telling us to be careful, because the roads are slippery in the mountains.

As soon as you land at the airport of the Chechen capital, Grozny, you can detect the North Caucasian local color: A brand new airport terminal, burly men in fur hats and an enormous photograph of Akhmad-Khadzhi Kadyrov, the father of the present Chechen leader (who died tragically in a terrorist act in 2004), on the wall of the airport building. The airport is actually named after him, as are many things in Chechnya. And portraits of Kadyrov Senior, often alongside those of [incumbent leader] Ramzan Kadyrov and Russian President Vladimir Putin, will accompany the traveler throughout the republic - you can see them on administrative buildings, on the walls of universities and colleges and everywhere else.

As we leave the airport building, we are confronted by the sight of the magnificent Yusup Sakkazov Mosque, named after an associate of Akhmad Kadyrov. It was opened in 2011, but still looks sparkling and new. 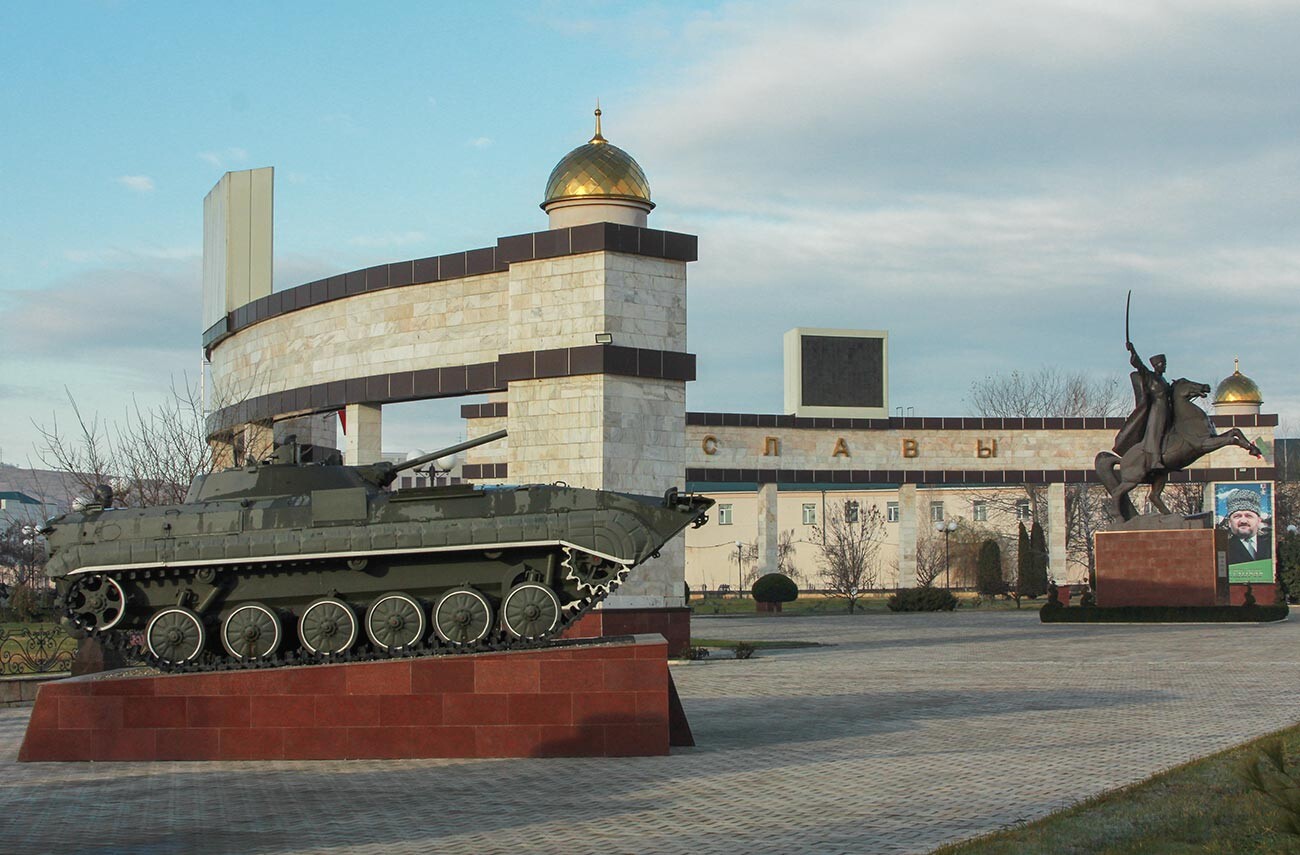 The streets of Grozny also look strikingly new. The attractive facades of old Soviet five- and nine-storied apartment blocks, unfamiliarly decorated with colored glass and tiles, make them completely unrecognizable. According to local residents, this fanciful design feature adopted in the renovation of the old buildings was by no means a whim of the city authorities. The buildings were severely damaged during the war - it officially ended in 2000 - but the “counterterrorist operation” regime was only lifted in 2009. 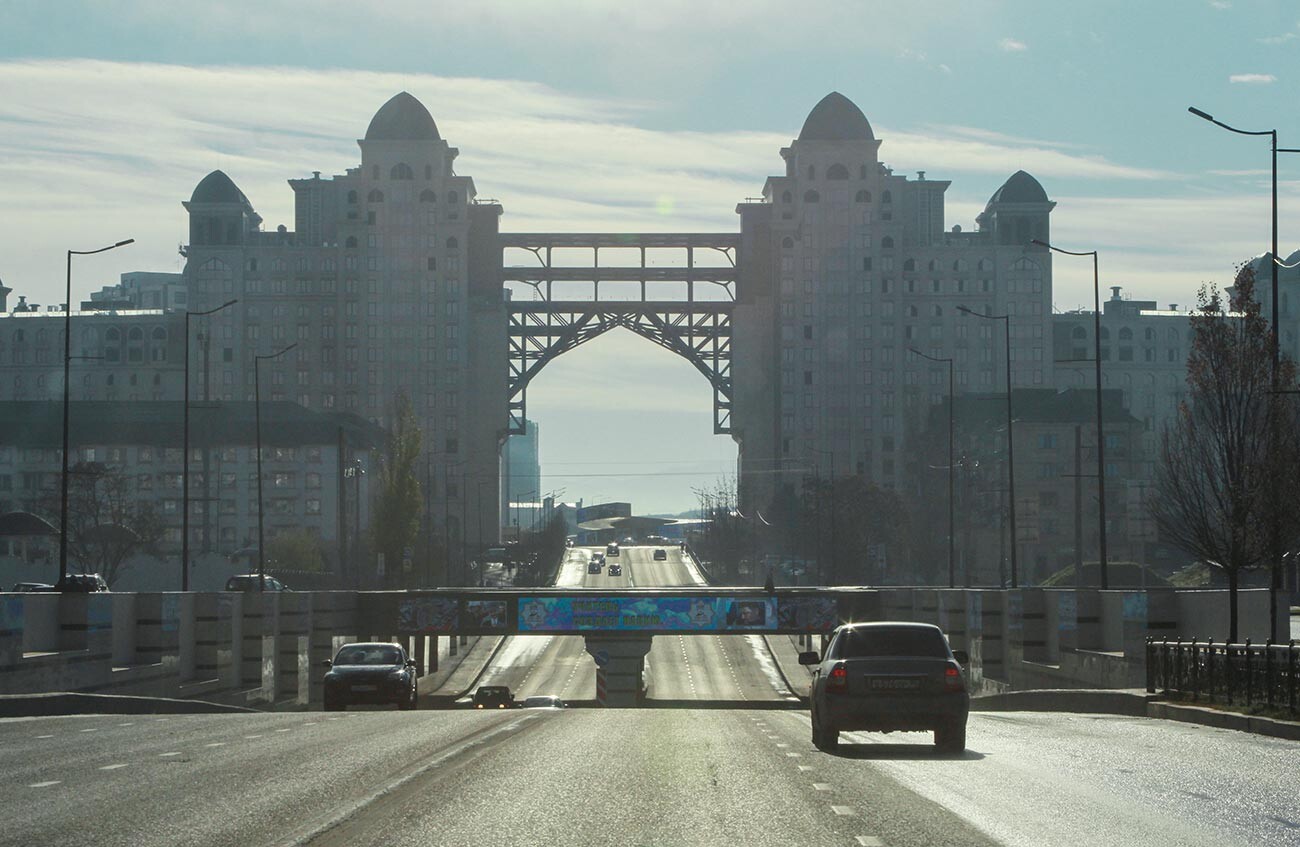 The new architecture of Grozny

Grozny was so badly damaged that, at some point, there was even talk of moving the capital to another Chechen city, Gudermes. This surviving testimony to the tragedy could simply have been patched up and painted over, of course, but then these buildings would have remained as sad monuments of the recent war. The unusual design has made them part of a new era and a new beginning. 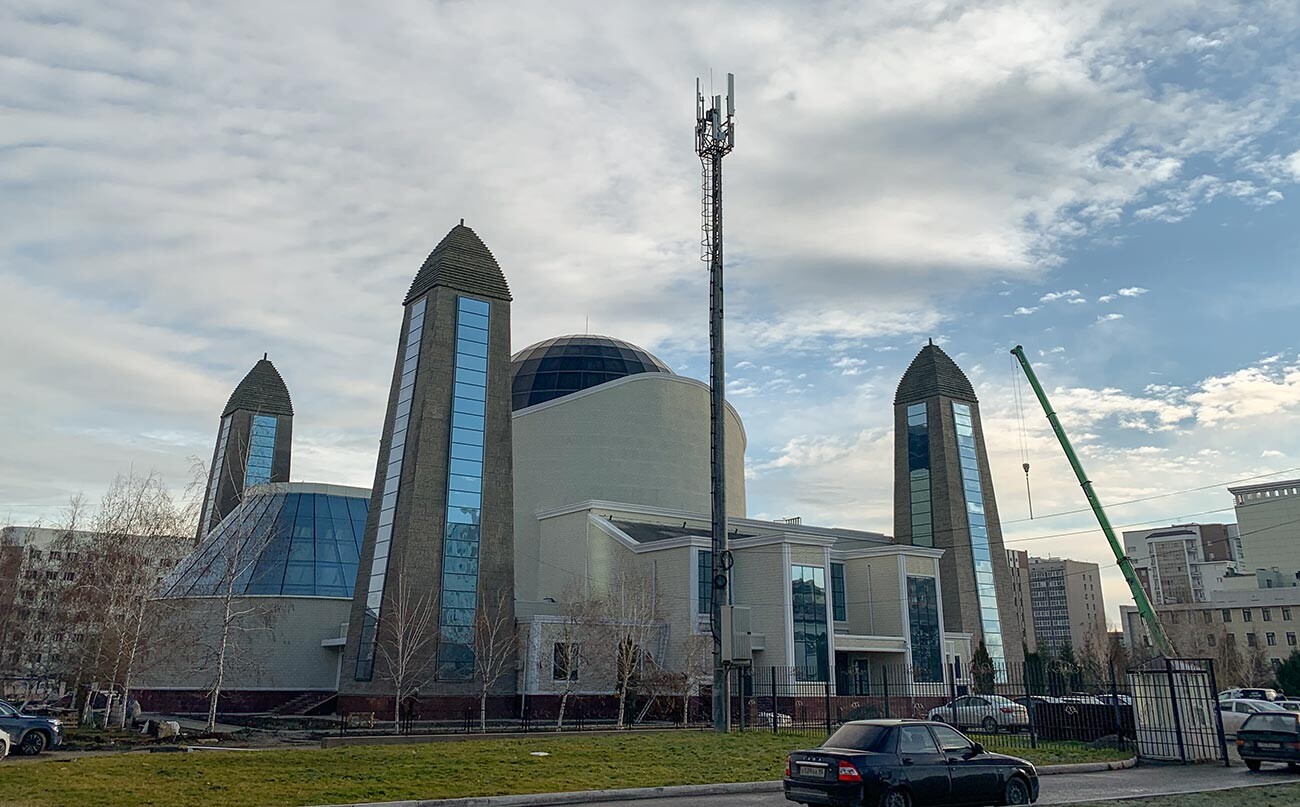 Museum of Chechen Republic in Grozny

A fair number of dilapidated buildings were completely unsuitable for restoration and new ones have been built in their place. In places - on Vladimir Putin Avenue, for example - exact replicas have been built to replace completely destroyed houses dating from the Stalin era. Only the shiny new stonework on their facades gives them away as new builds. 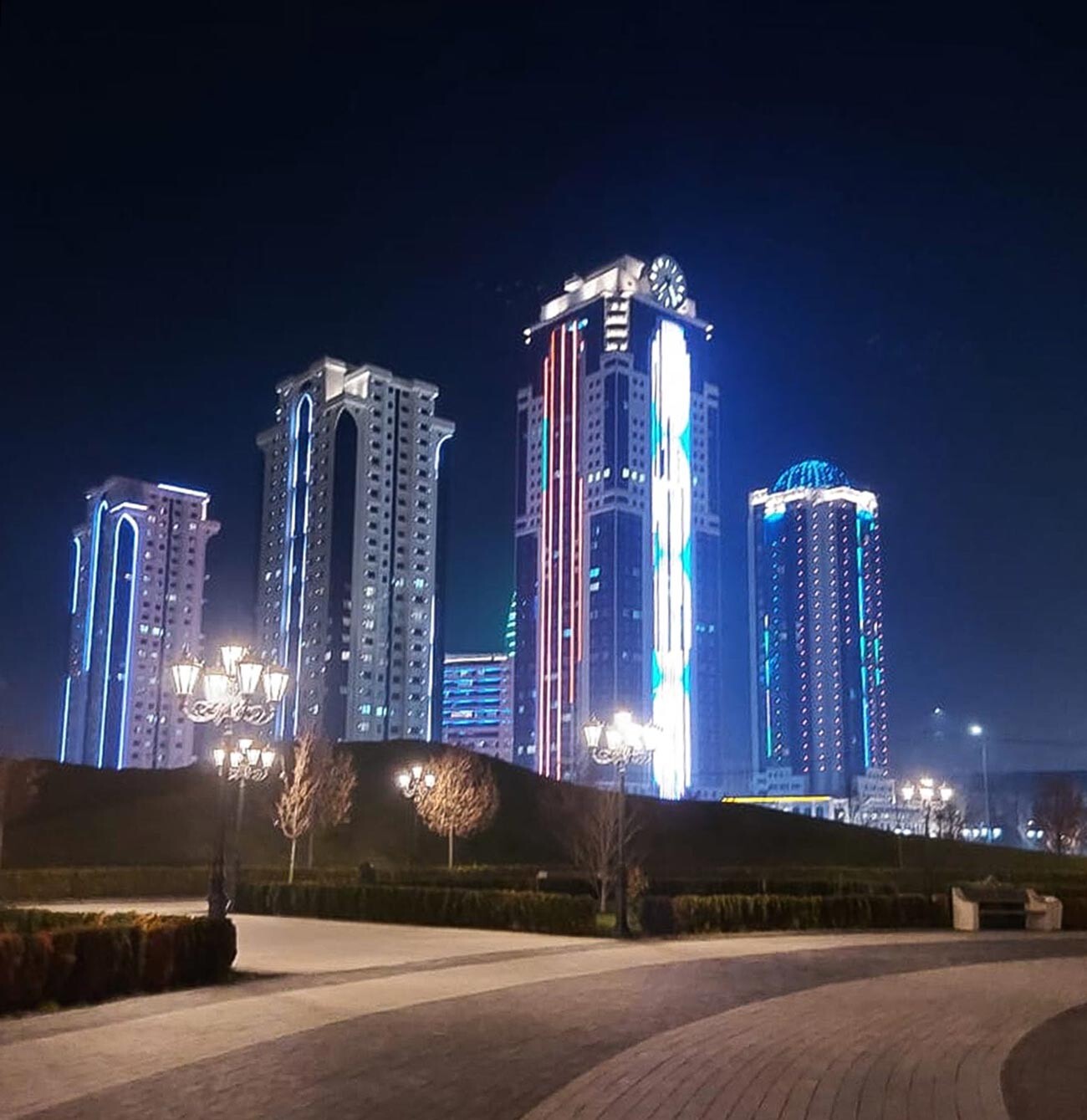 The skyscrapers of Grozny

Many buildings in Grozny are completely new in concept and design. And this applies not just to the well-known Grozny City development with its skyscrapers, but also to modernist shopping centers and stadiums. 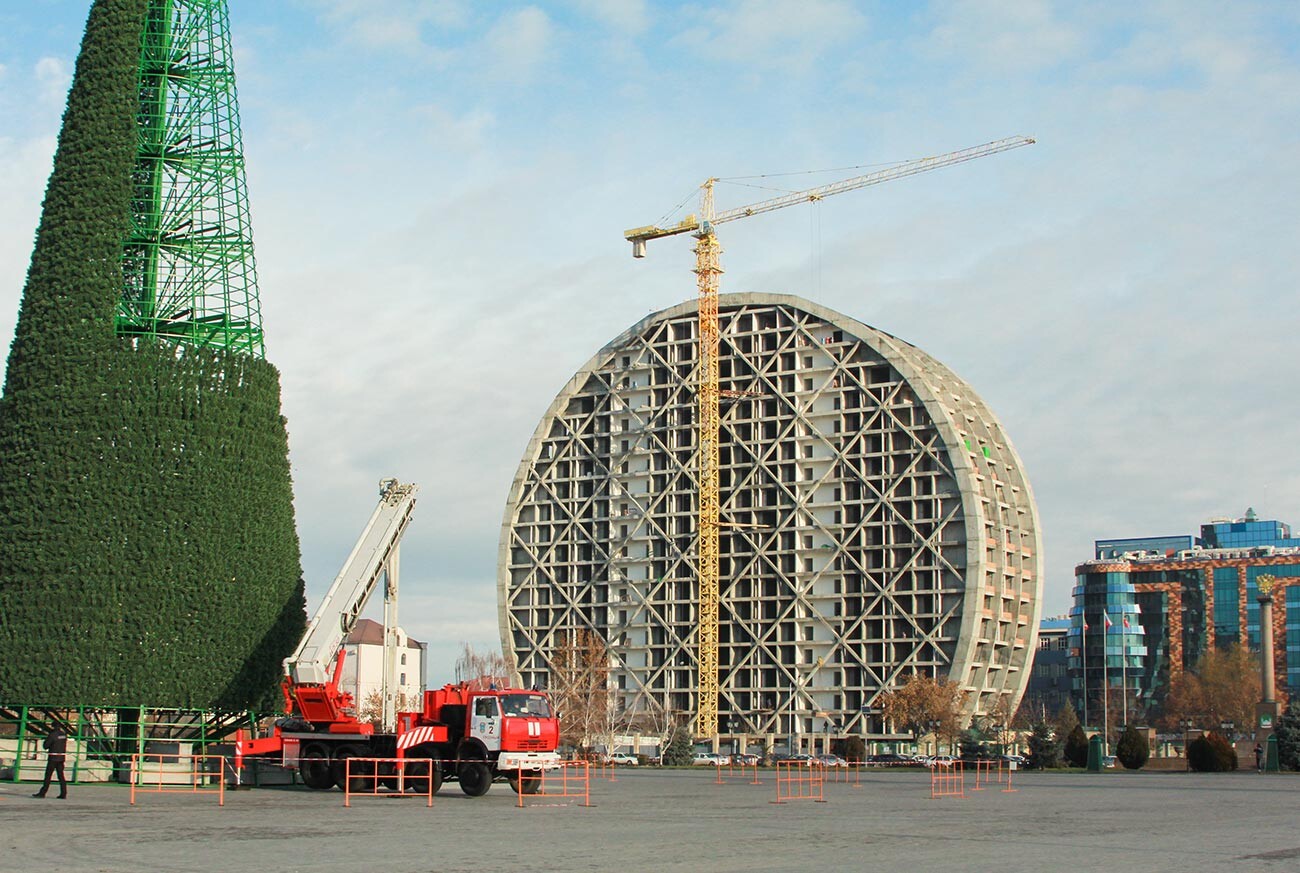 In the center of Grozny, a New Year tree is dismantled after celebrations

There aren’t a lot of passersby in the streets. It seems, at times, that the city is a little too big for its population (which currently stands at a little over 300,000). That may, of course, just be the distorted impression of someone used to the crowded conditions of a big city. 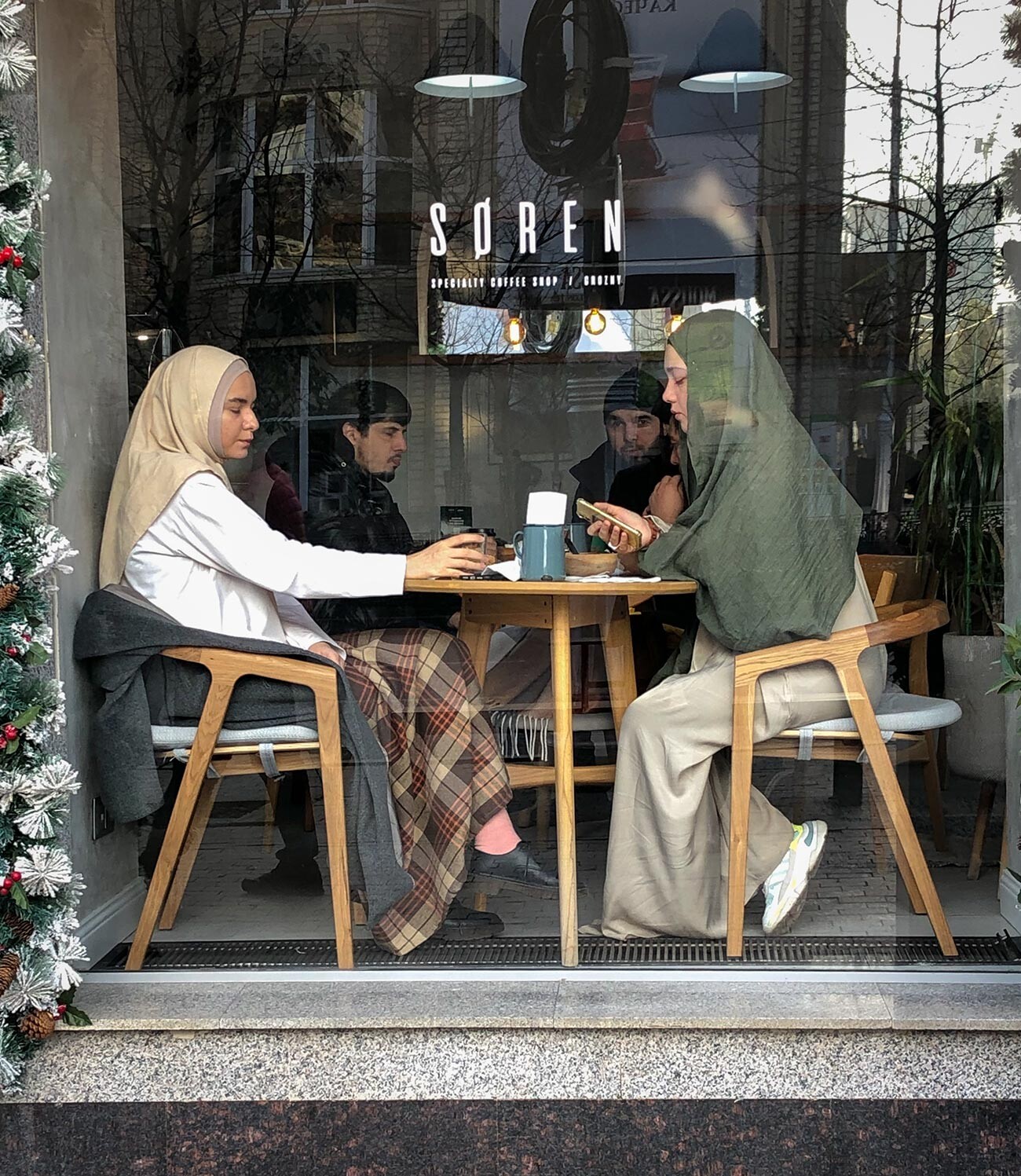 It’s believed that married Chechens should cover their heads

Gaggles of chirpy young girls, many of them students, can be encountered in the streets - some with head coverings in the local tradition, others without. 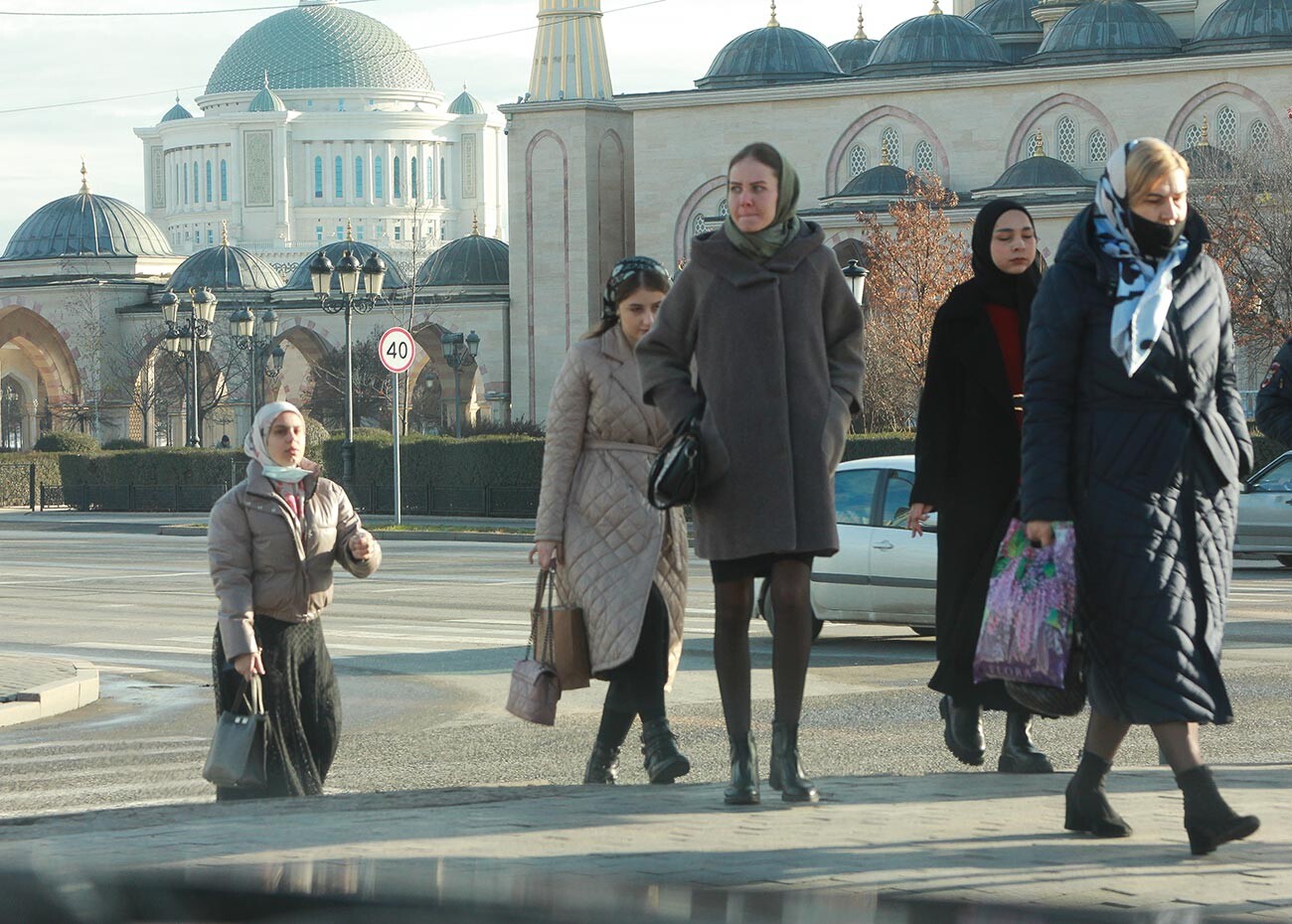 In the streets of Grozny 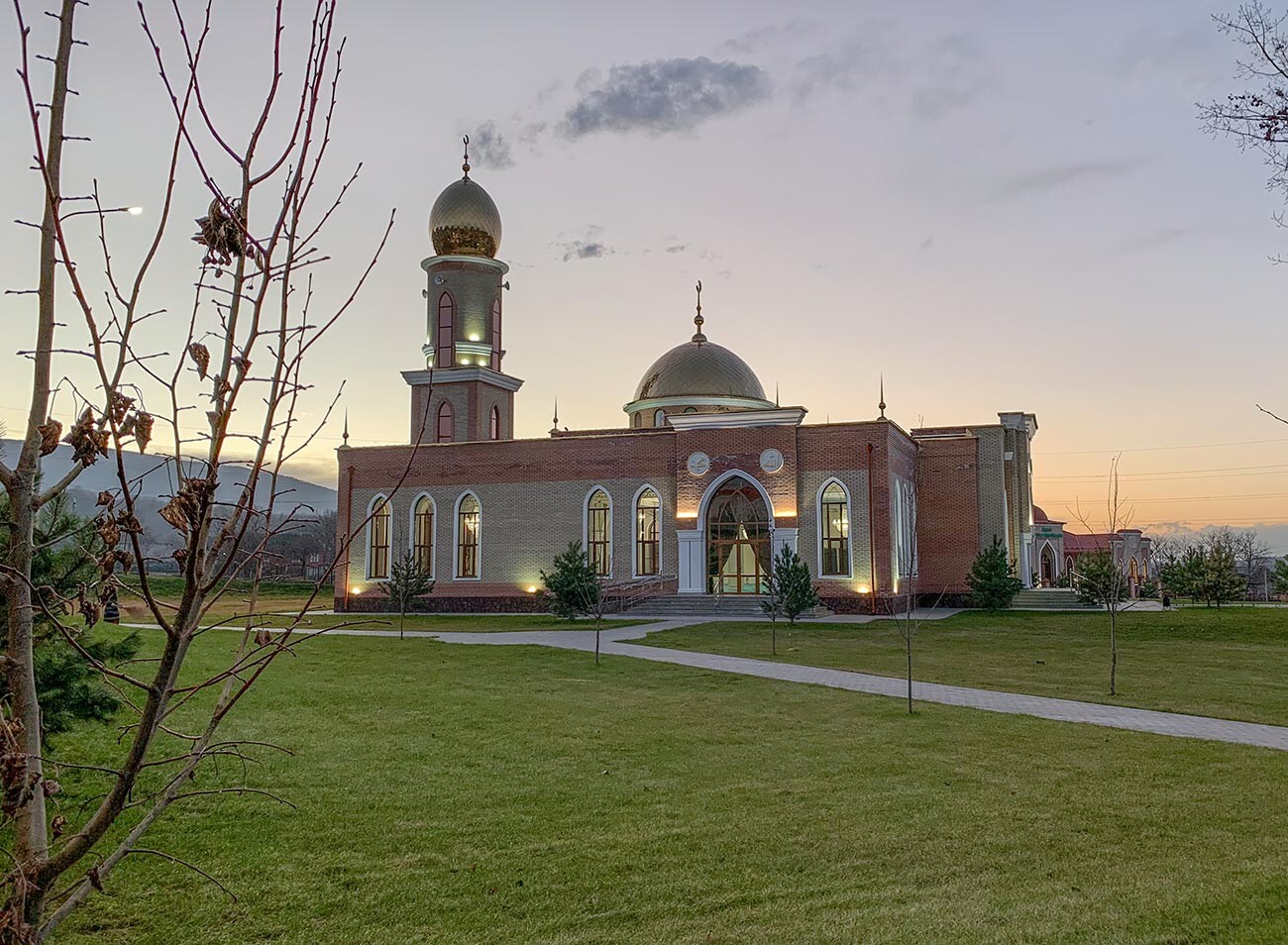 Rural mosques in Chechnya are often architecturally similar to churches

The dominant buildings in Chechnya are, of course, its new mosques, which are being put up in plentiful numbers in the republic. 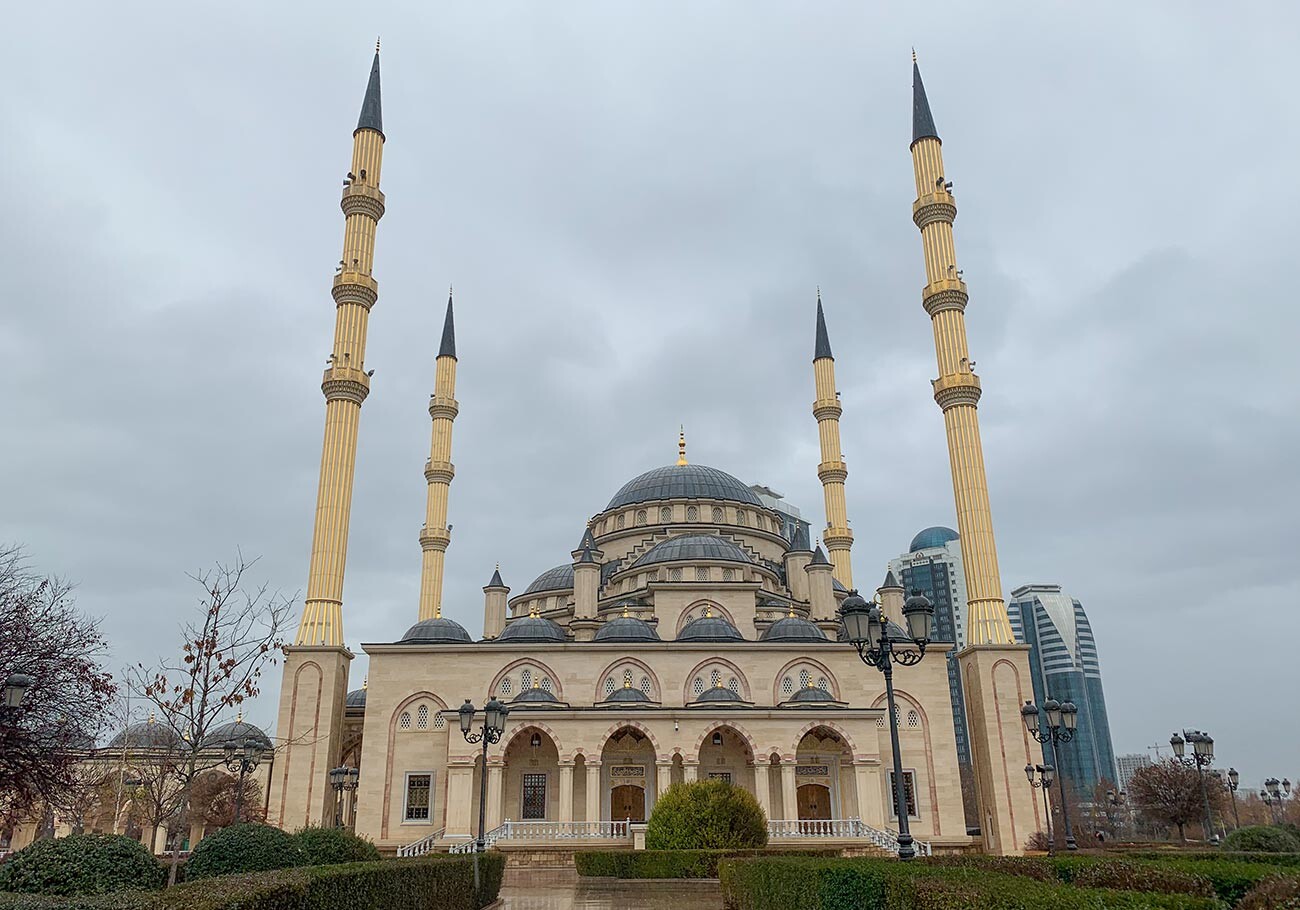 The ‘Heart of Chechnya’ Mosque in Grozny

The principal one is the Akhmad Kadyrov ‘Heart of Chechnya’ Mosque. Incredibly opulent and beautiful, it claims to be the biggest mosque in Europe. It is modeled on the legendary Blue Mosque in Istanbul, a world heritage building. Despite its size, it was built in record time - a little over two years. 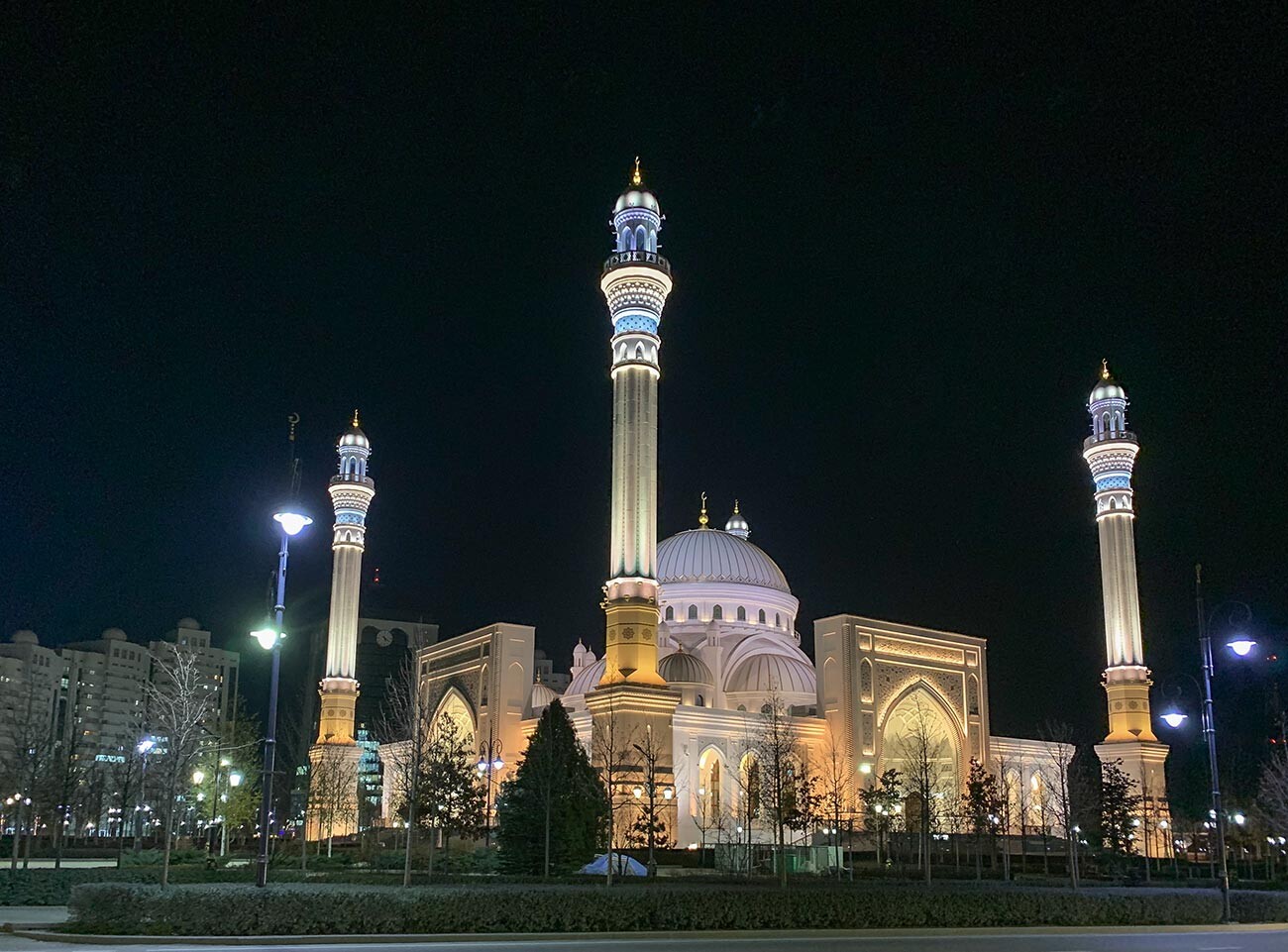 The ‘Pride of Muslims’ Mosque in Shali

It can accommodate more than 10,000 worshippers and is surrounded by an enormous park on the banks of the Sunzha River. In addition, the so-called “Islamic Complex” is located around it, which includes the Kunta-haji Russian Islamic University and the Spiritual Administration of Muslims of the Chechen Republic. 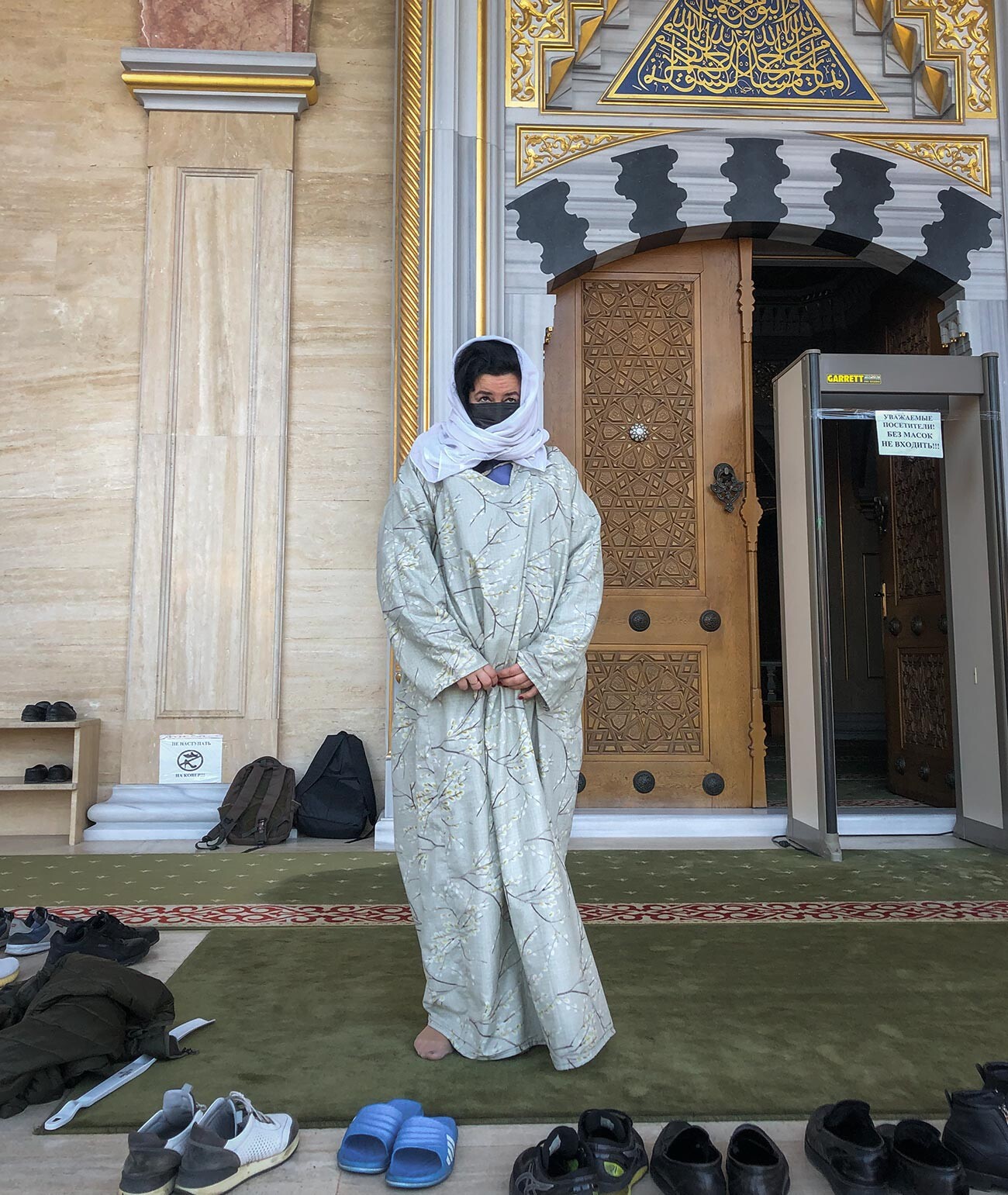 In front of the mosque

The second most important mosque, equally huge and beautiful, is the ‘Pride of Muslims’ Mosque in the small town of Shali. A third mosque in Argun is completely different in design. This one is built in a contemporary modernist style and is called ‘Mother’s Heart’ (it is dedicated to Ramzan Kadyrov’s mother). 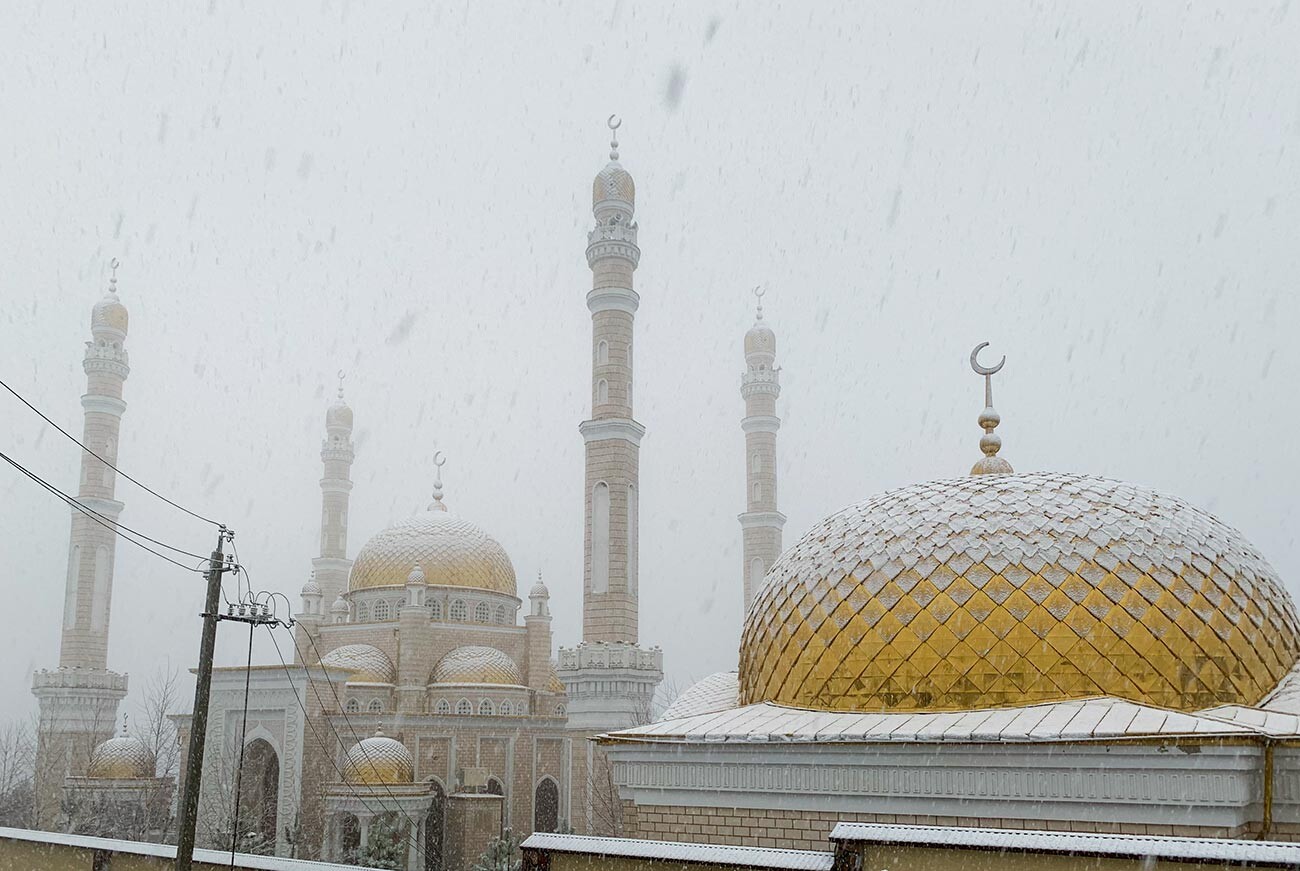 Apart from these stand-out (in all respects) mosques, a large number of their smaller “sisters” also function in the republic or are being actively built.

The ancient mountains are probably one of the main attractions of Chechnya today. The traveler is not surrounded by them straight away: Grozny itself and its airport are situated on a broad, flat plain, where there is nothing to remind one of mountain peaks. Agriculture is highly developed in this part of the republic, as the mild climate and fertile soil create the right conditions for both animal husbandry and arable farming. The winters are not harsh and temperatures can drop a little below zero only very rarely and not for long. 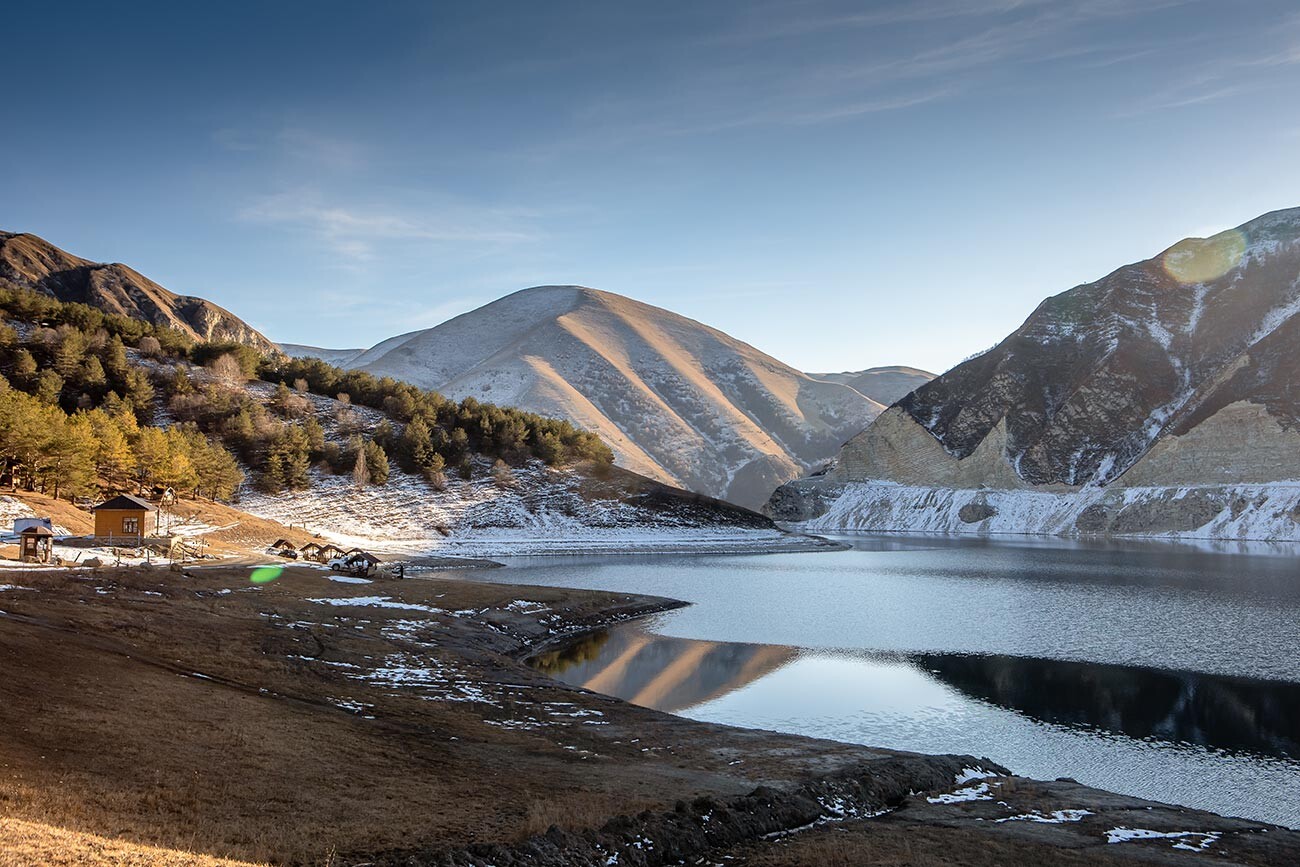 But, literally half an hour’s drive away in the direction of Lake Kezenoy-am (on the border with Dagestan, another North Caucasus republic), the mountains begin to cluster around you and the road starts to twist around them in hairpin turns. The roads are quite good and my new Exeed VX Chinese-built SUV copes with them perhaps too well. There are no roadside barriers, however, so the driver has to take extra care. Additionally, road markings are far and few between - this is particularly inconvenient at night. 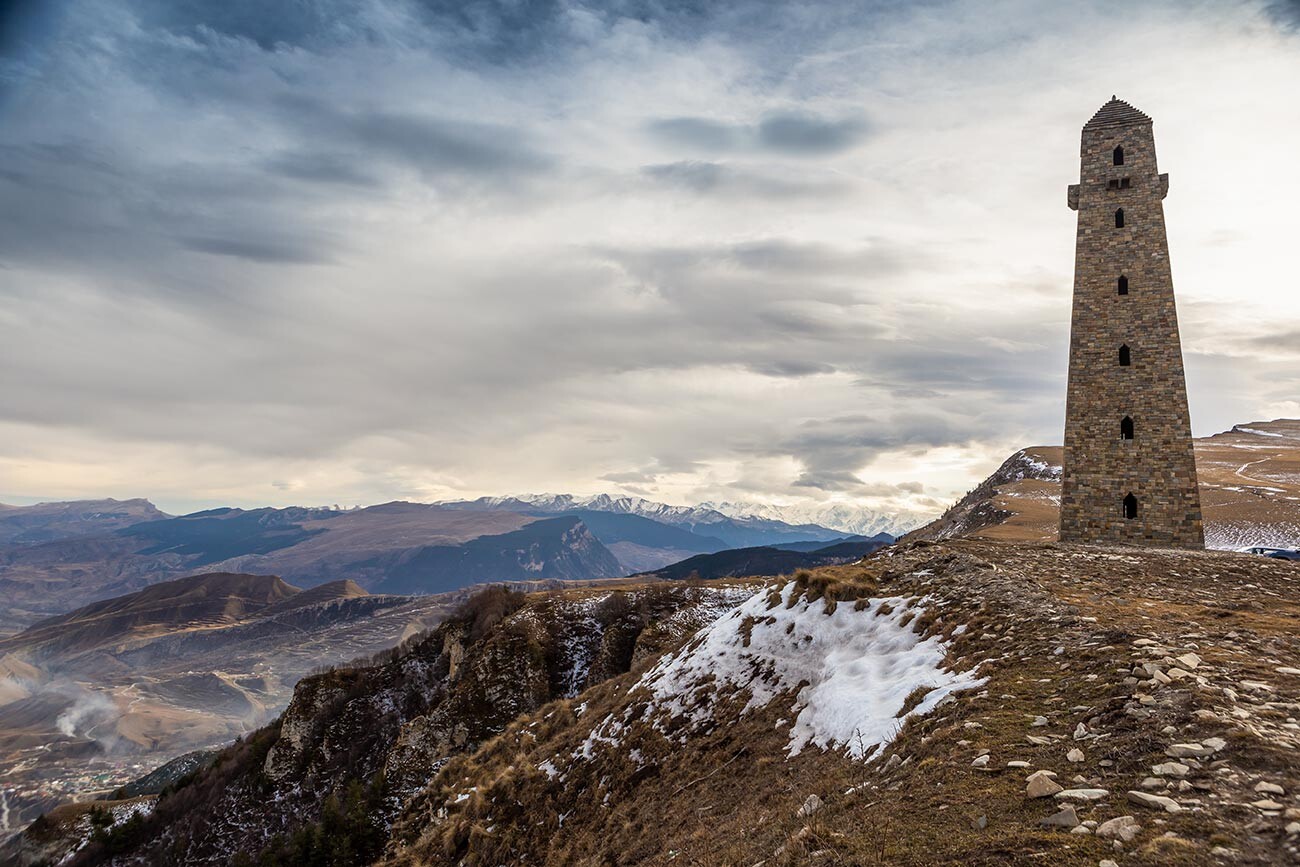 In the most diverse locations, you can unexpectedly come across a teip (“clan”) tower. Such buildings are typical for all ethnic groups in the whole of the North Caucasus.

In ancient times, the men of a clan could shelter from danger in these towers, in the event of a blood feud on the part of another clan. Today, travelers are struck by their might and remoteness. 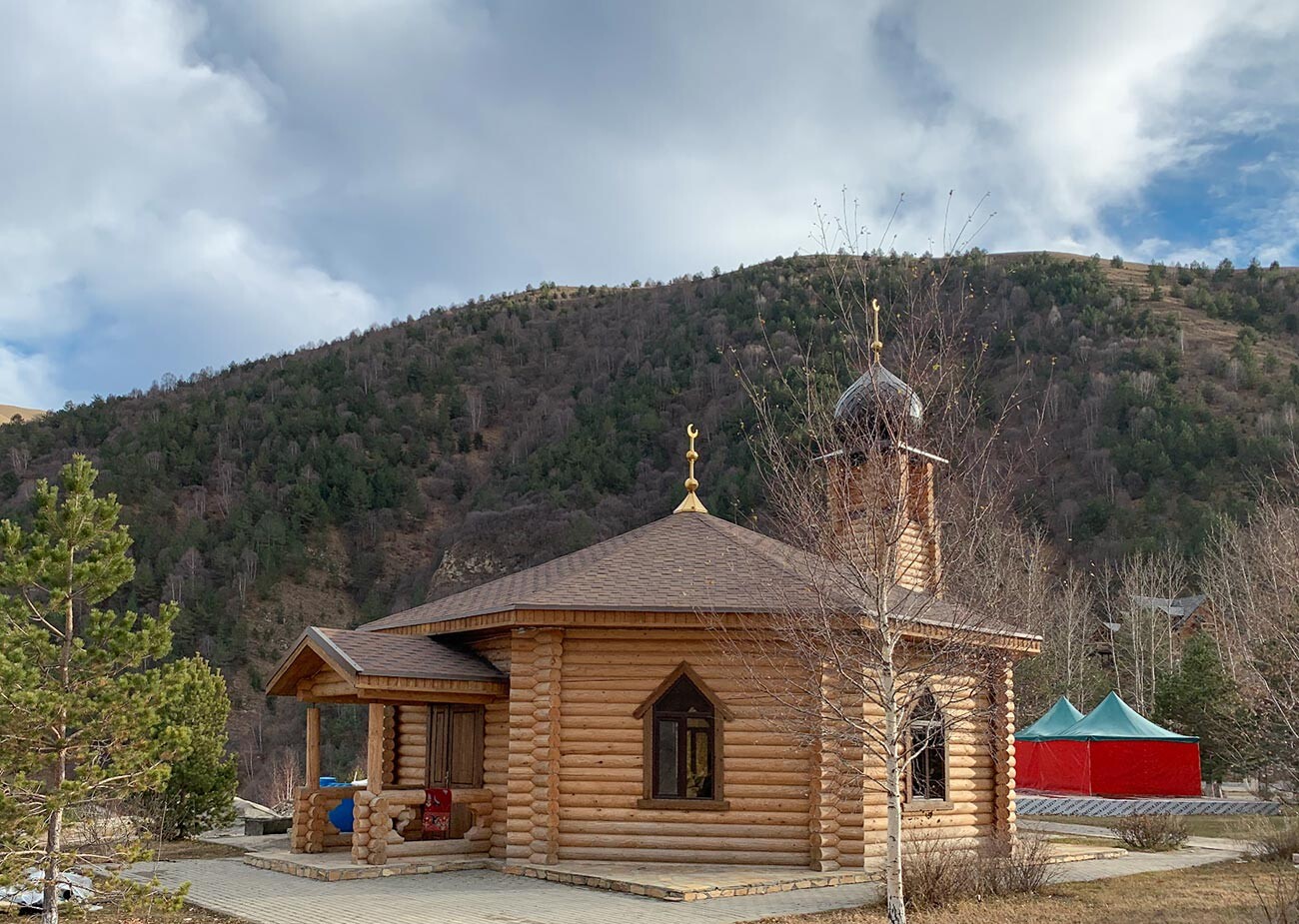 Chechnya’s mountain landscapes are quite varied. For admirers of austerely beautiful views, there are desolate rocky areas punctuated in places by picturesque lakes. But, there are also the so-called wet mountains, covered with forests, where sheep graze on vertical emerald-colored pastures. 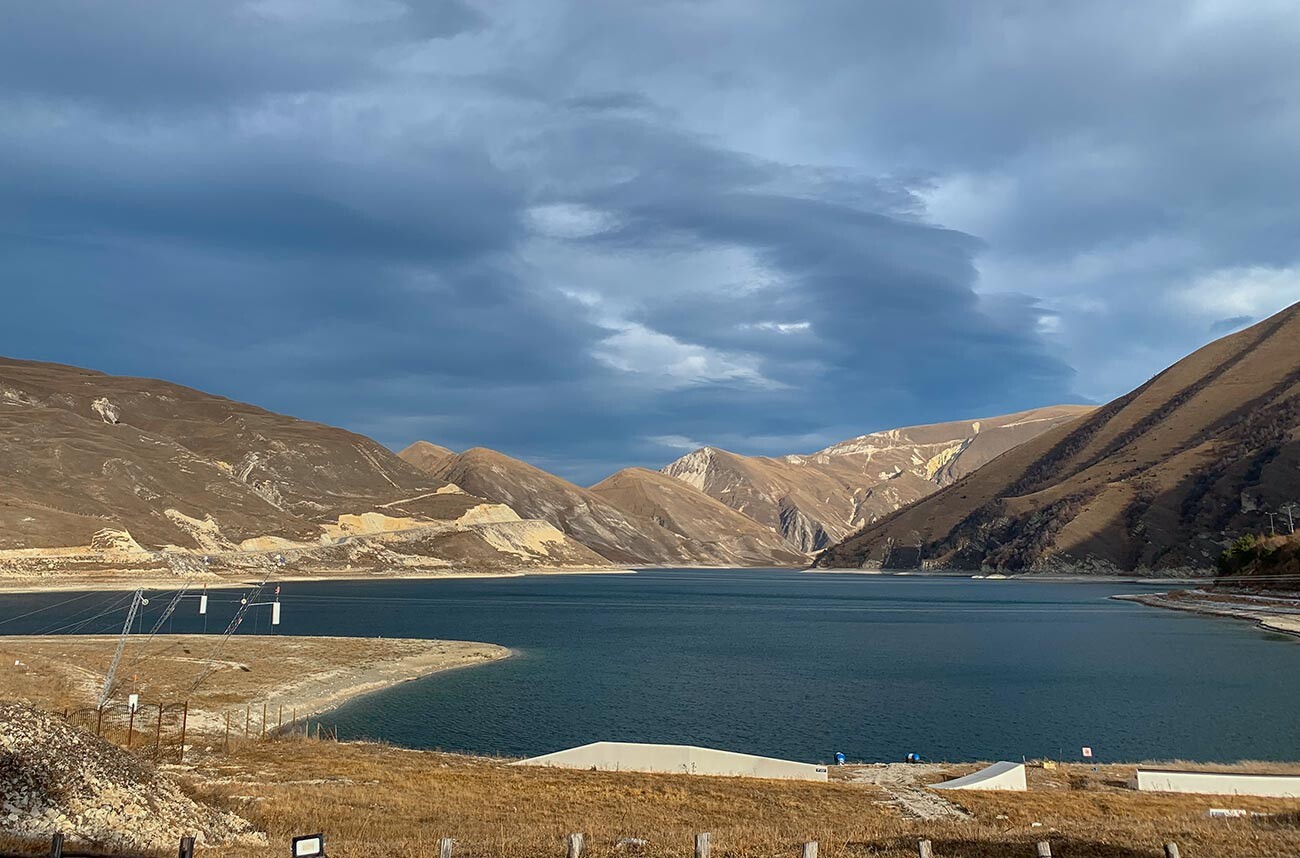 It has to be said that the weather in the mountains in winter is highly changeable and, on the day I set out for the “wet” mountains, at first, there was rain coming down in sheets and then, on the way up, it turned into heavy snow with zero visibility. And you could only guess how beautiful the views were to the sides. Mountain roads instantly become dangerous and difficult to negotiate in such weather. So, if you decide to see the beautiful sights of Chechnya from close-up, choose a warm time of year and the right type of vehicle!