Travel
William Brumfield
Architectural historian and photographer William Brumfield takes a closer look at the magnificence of the 16th-century place of worship - still intact to this day. 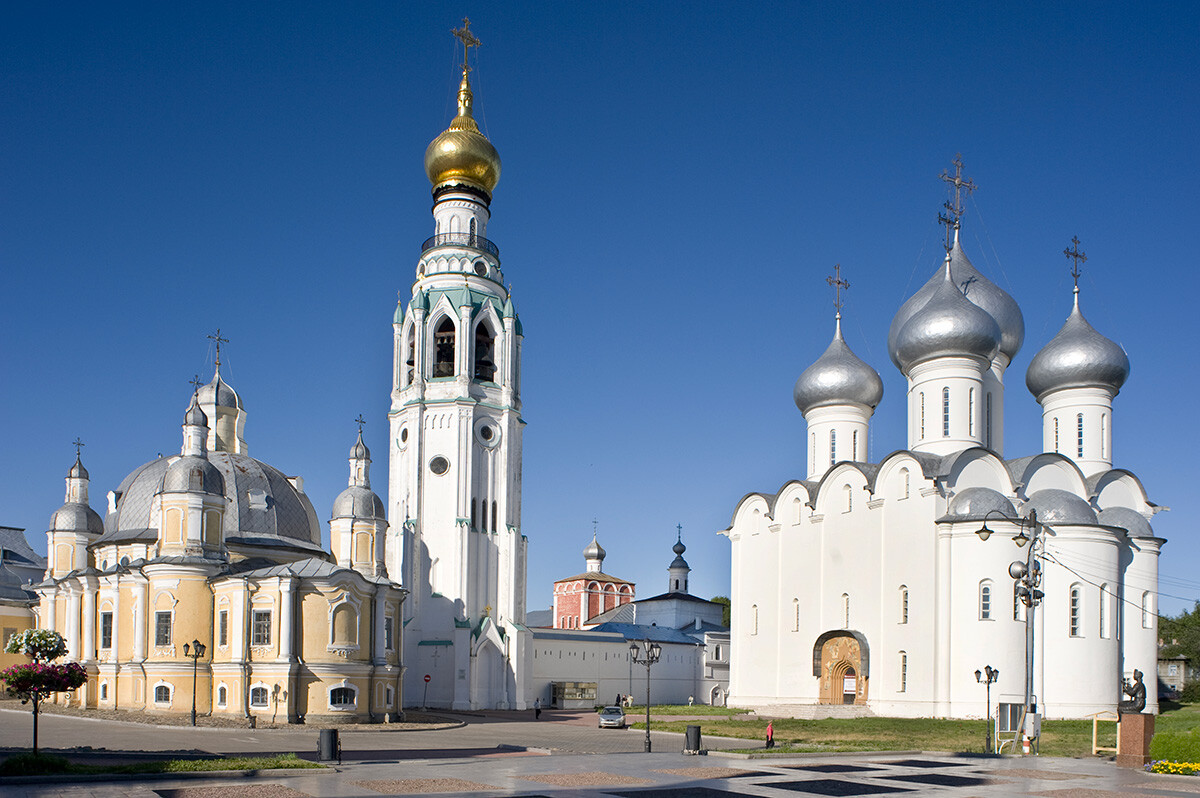 At the beginning of the 20th century, Russian chemist and photographer Sergey Prokudin-Gorsky developed a complex process for vivid color photography. His vision of photography as a form of education and enlightenment appeared with special clarity in his images of Russia’s architectural heritage.

As part of his journeys, in June and July of 1909, Prokudin-Gorsky received a commission from the Ministry of Transportation to take photographs along the Mariinsky Waterway in northwestern Russia. This water route, which connected St. Petersburg with the Volga River basin, was initiated by Peter the Great to supply his new capital - founded in 1703 - with grain and other essential commodities from the interior of the country.

The Mariinsky Waterway was further developed during the reign of Emperor Paul (1796-1801), who named it after his consort, Empress Maria Feodorovna. The upper part of the system extended from the Neva River at St. Petersburg to Lake Ladoga, then via the Svir River to the southern part of Lake Onega. 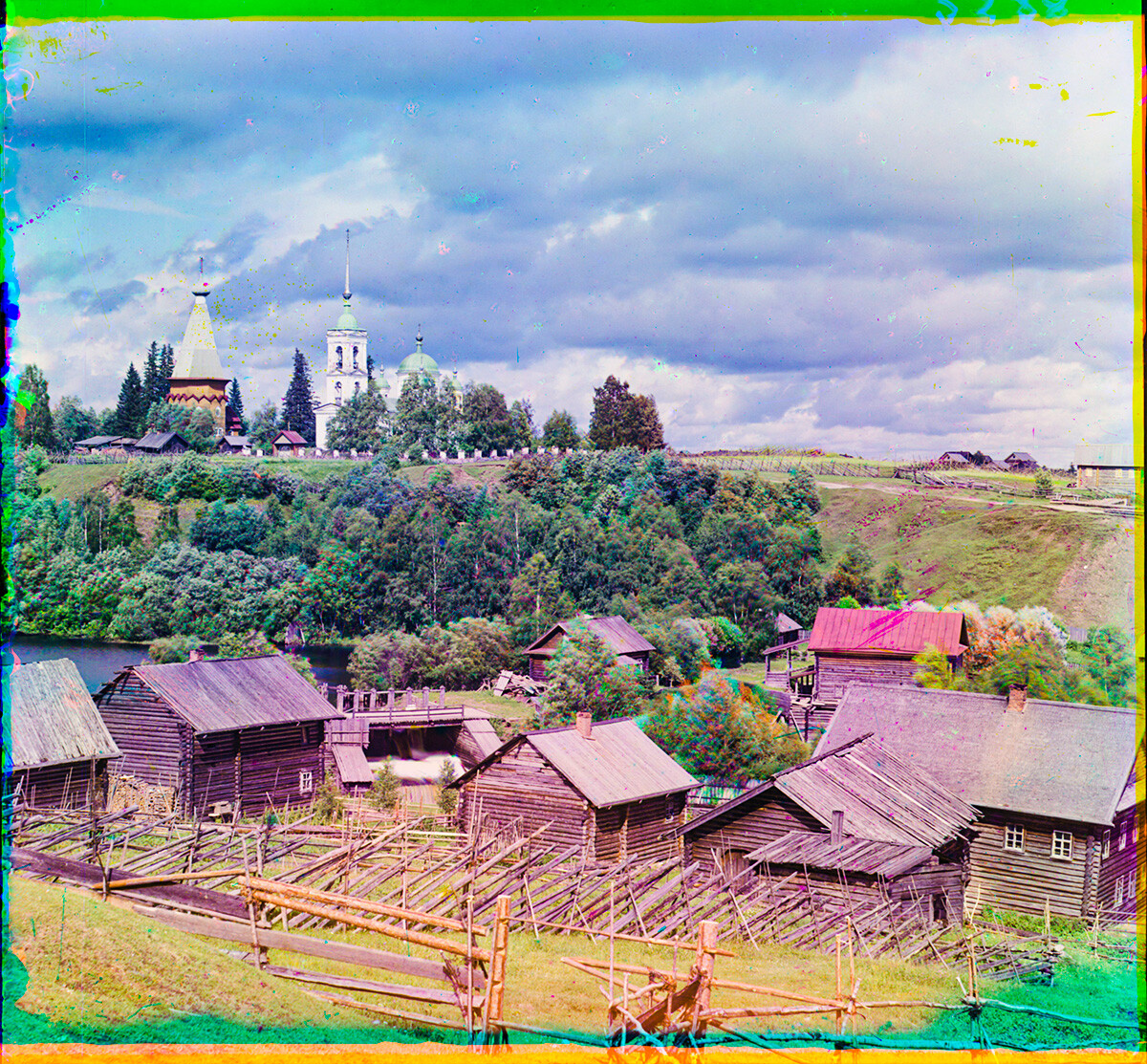 Pidma, a 16th-century settlement situated near the middle of the Svir River, especially attracted Prokudin-Gorsky’s attention with its remarkable log Church of the Transfiguration, a large octagonal structure built in 1696. This remarkable monument was destroyed by fire in April 1942, during the Finnish occupation of the village (from September 1941 to May 1944).

Fortunately, Prokudin-Gorsky’s several photographs of the church included a large painting of the ‘Last Judgment’, with the righteous gathered on the right hand of Christ and the damned depicted in lurid detail descending to the clutches of Satan. Presumably done in the late 19th century, the image shows striking parallels with one of Russia’s great 17th-century fresco cycles, now located in the main shrine of the north Russian city of Vologda. 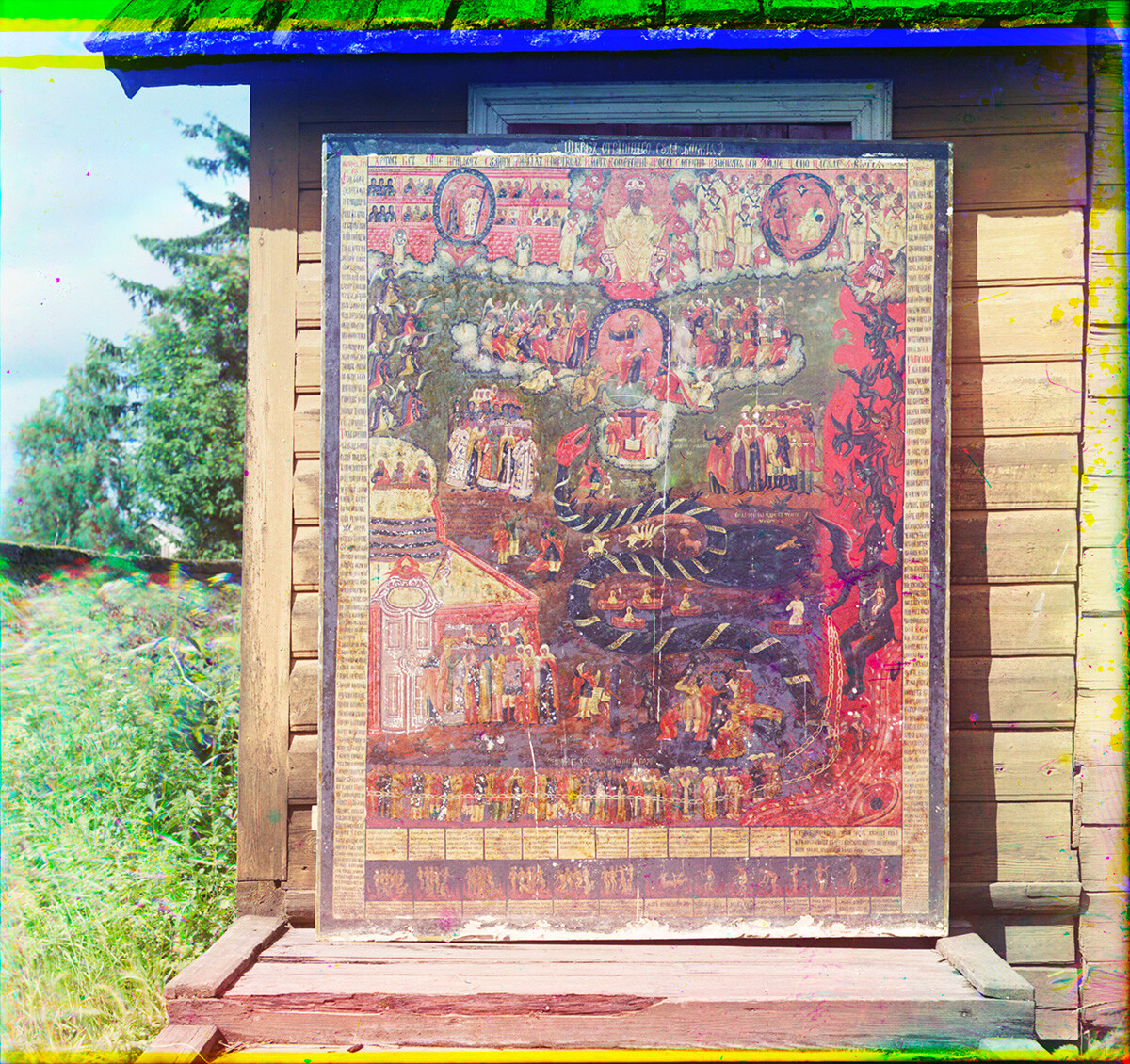 By the mid-16th century, Vologda served as the primary distribution point for Moscow’s thriving trade with England and Holland by way of the Northern Dvina River through the new port eventually known as Arkhangelsk. 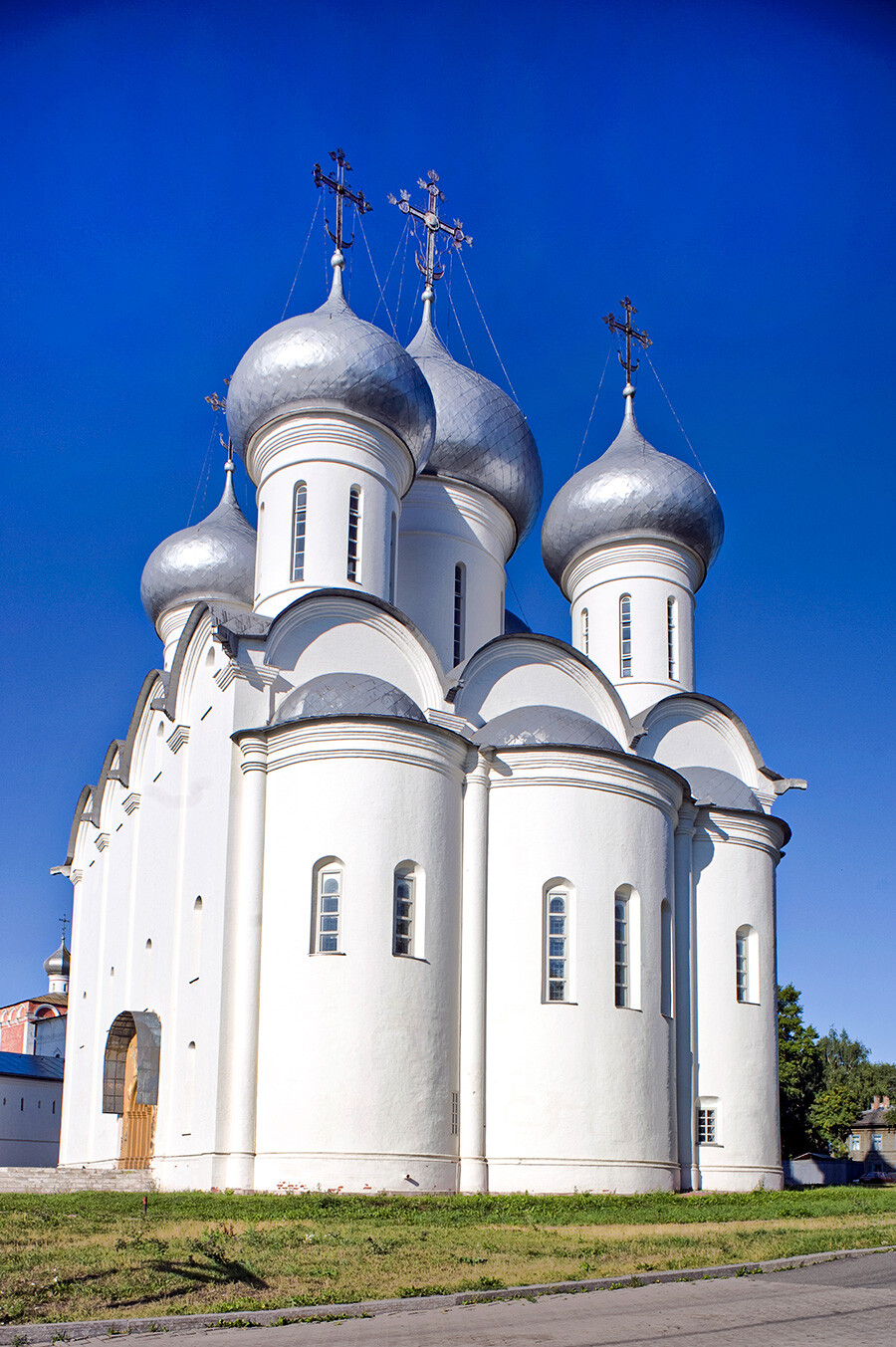 Vologda was still built entirely of wood, until Ivan IV (the Terrible) decided in 1565 to include the town in his private domain or oprichnina. He initiated construction of a masonry fortress to protect his northern residence, but, after 1571, this enterprise was abandoned and the walls were eventually dismantled. However, one important building remained, a cathedral dedicated to the Divine Wisdom - or Saint Sophia. 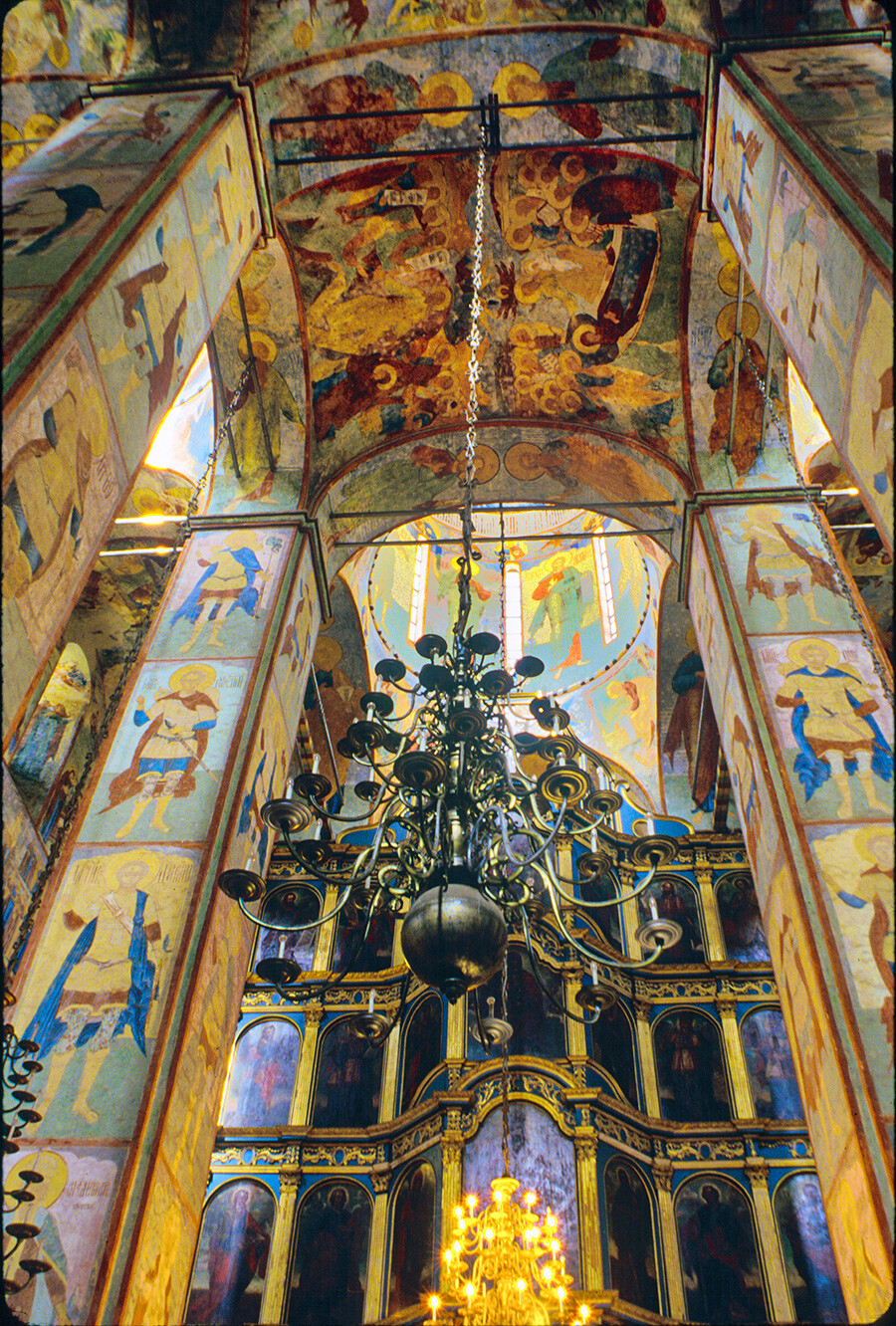 The St. Sophia Cathedral is an excellent example of 16th-century church architecture based on Aristotle Fioravanti’s august Dormition Cathedral (1475-79) in the Moscow Kremlin. The cathedral was intended to serve as the seat of the Vologda bishopric, which had been expanded in 1571, but, for political reasons, the cathedral was not consecrated until 1588, four years after Ivan’s death. 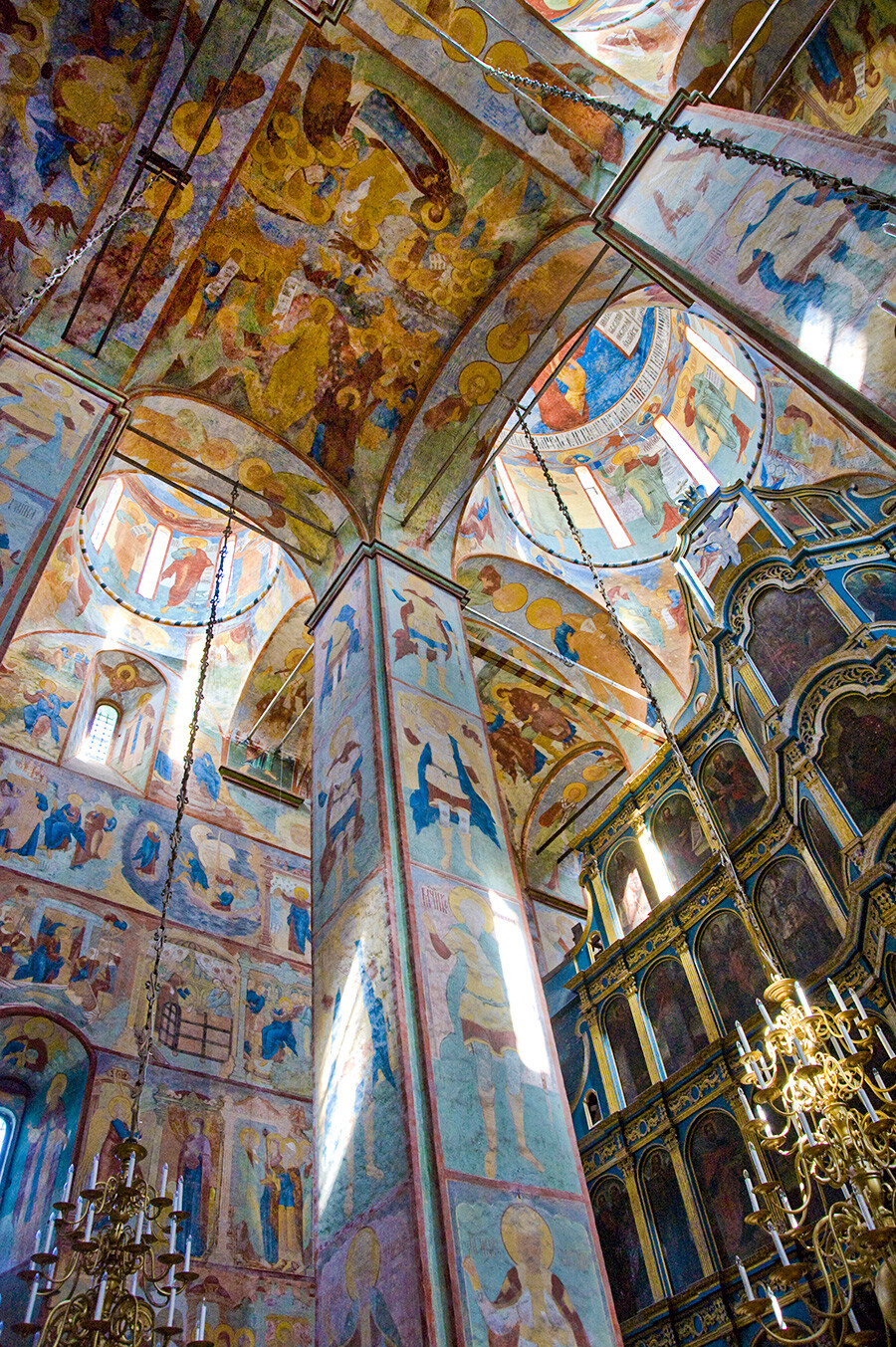 St. Sophia Cathedral. View northeast with icon screen; ceiling vault with frescoes of Dormition of the Virgin & Descent of Christ into Hell. July 20, 2011

Fortunately, the Sophia Cathedral has largely preserved its sixteenth-century form. Its whitewashed brick walls are segmented and lead to a roofline of semicircular gables, or zakomary, restored after World War II. The onion domes, which provide a striking culmination to the structure, were rebuilt in their present form during the 17th century. The elaborate iron crosses above the cupolas were added in 1687. 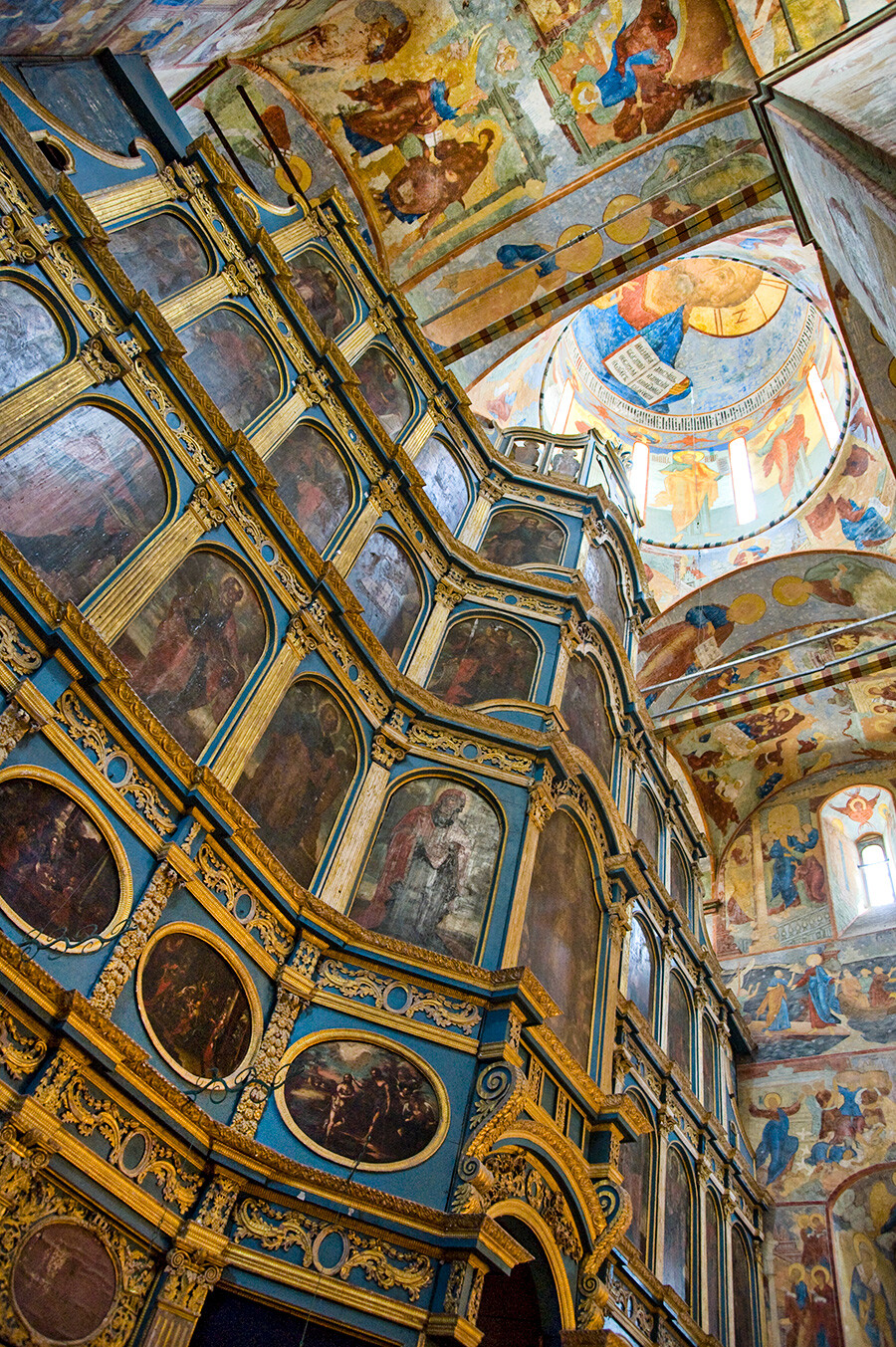 The monumental simplicity of the exterior is imposing, but the Sophia Cathedral reveals its true grandeur on the interior, which contains some of the best-surviving examples of 17th-century Russian frescoes. In 1686, Gavriil, the archbishop of Vologda, commissioned the painting of the enormous interior space by a group of some thirty artists from the city of Yaroslavl. 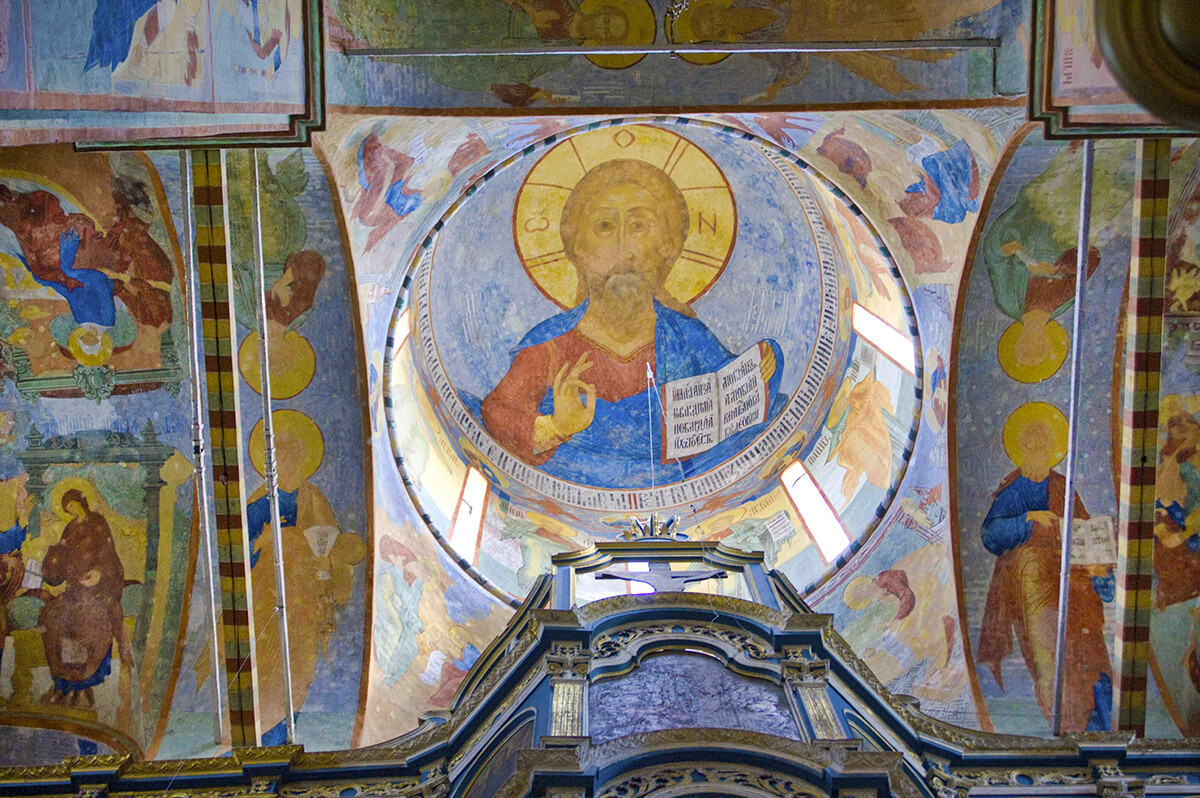 Among them were experienced masters, such as Dmitrii Grigorev Plekhanov, who had supervised the painting of the Dormition Cathedral at the Trinity-St. Sergius Monastery near Moscow in 1684. In an era when the Western view of art as an occupation was entering Russia, the artists painted an elaborate inscription on the lower part of the interior with a list of their names and a proclamation on the beginning and end of their work, from July 1686 to the summer of 1688. 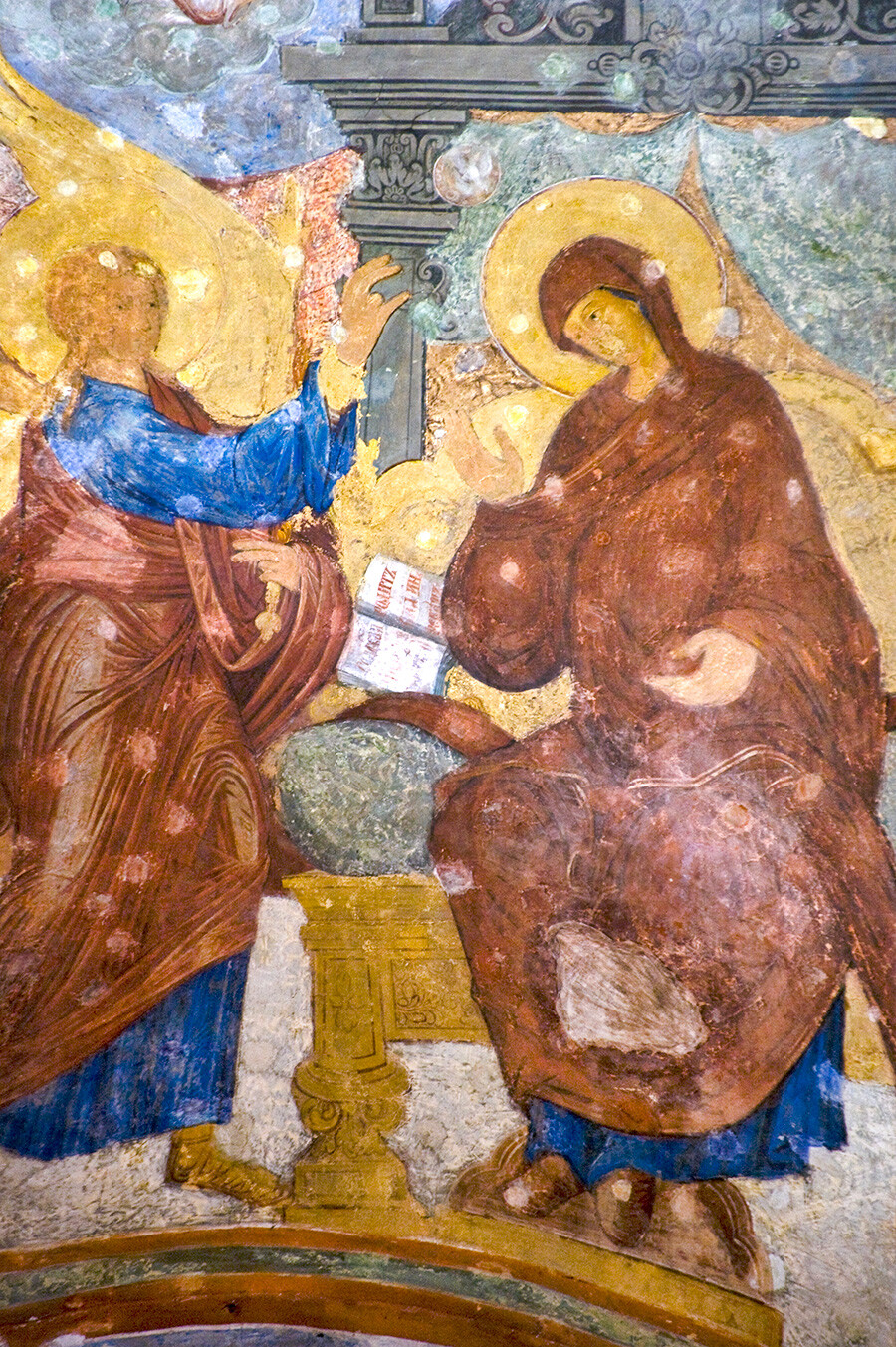 The frescoes include symbols of the faith, major church festivals, scenes from the life of the Virgin Mary, as well as the life and parables of Christ. In the main cupola, Christ Ruler of All is depicted, while the four smaller cupolas portray John the Baptist; the Trinity (Father, Son and Holy Ghost); Mary and the Christ Child; and Christ Emanuel. Martyred warriors and Russian princes are on the large piers that support the ceiling vaults. Elsewhere are apostles, Old Testament prophets and patriarchs, as well as the four Evangelists. 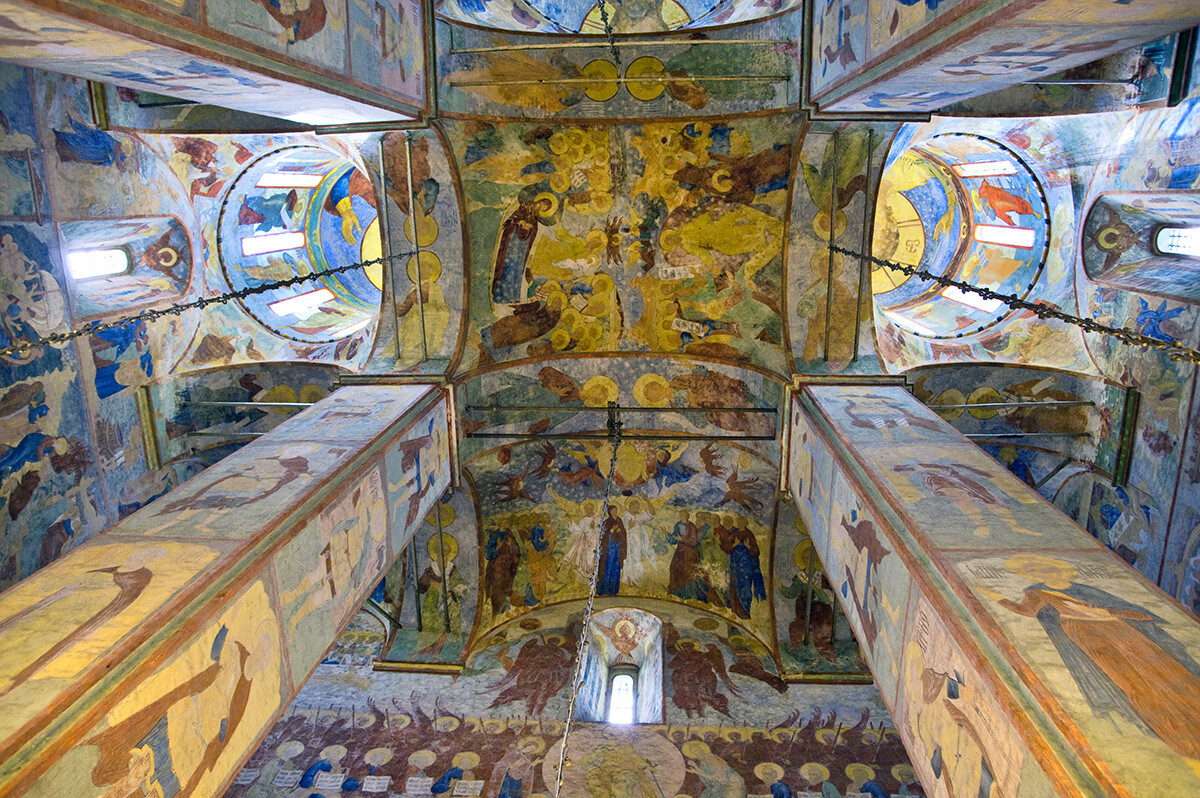 In contrast to earlier medieval art, these wall paintings are rich in detail - a quality attributed in part to 17th-century engravings in the so-called ‘Piscator Bible’, published in Amsterdam and used by artists from Yaroslavl. The apse, which contains the altar, is also covered with frescoes, although it is not visible from the center of the cathedral, because of the iconostasis or wooden screen containing holy images. 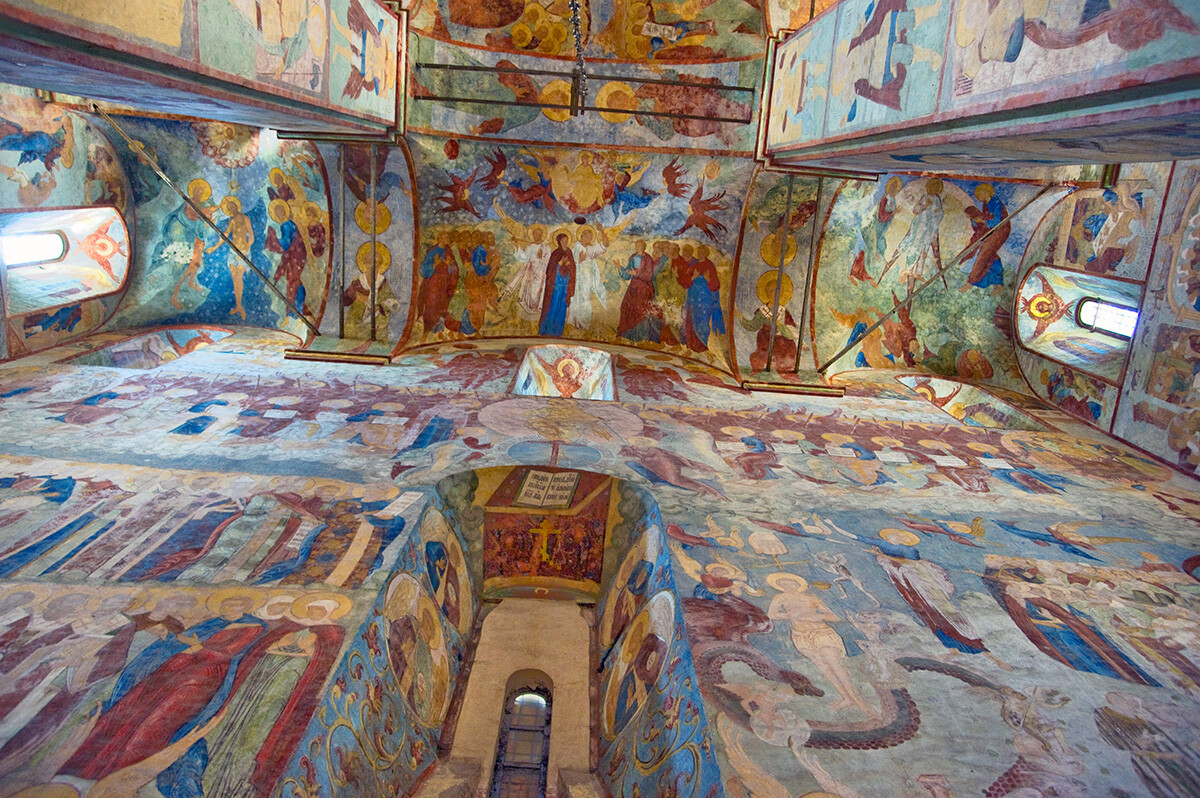 Indeed, the Sophia Cathedral’s painterly art is not limited to its frescoes. The east side of the interior contains an icon screen that is among the largest in the Russian north, over 60 meters in height. The frame of this towering structure was completed in 1737 by Arsenii Borshchevskii, a local monk of Polish extraction, to replace a late 17th-century iconostasis badly damaged by fire in 1724. 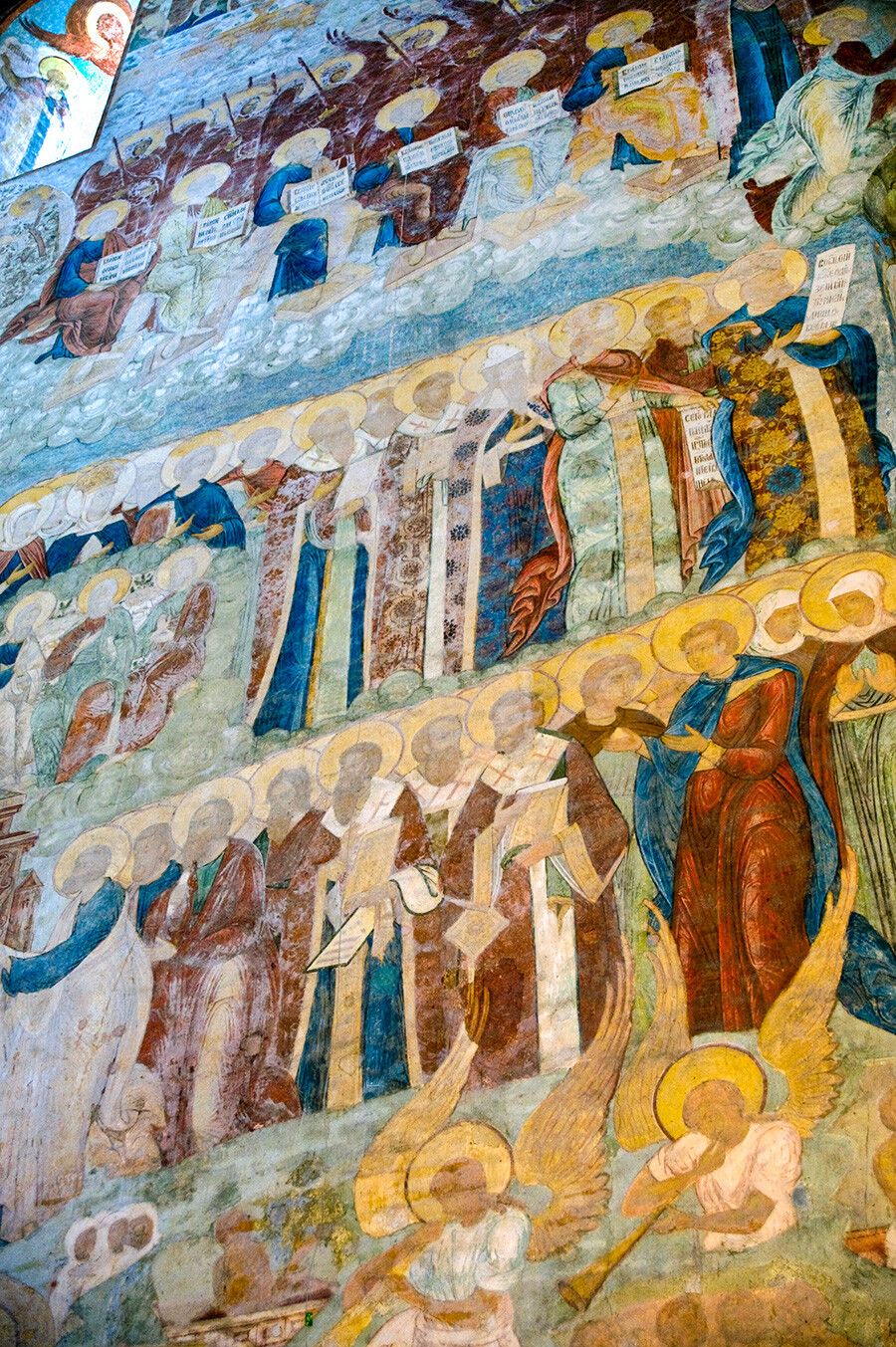 Apart from the Local Row of ancient icons at the bottom, the new icons were completed a year later by Maksim Kalinin Iskritskii - also of Polish descent. Painted in oil on pine boards, these icons show a mannered western style favored by Russia’s church hierarchs and by the Russian court. 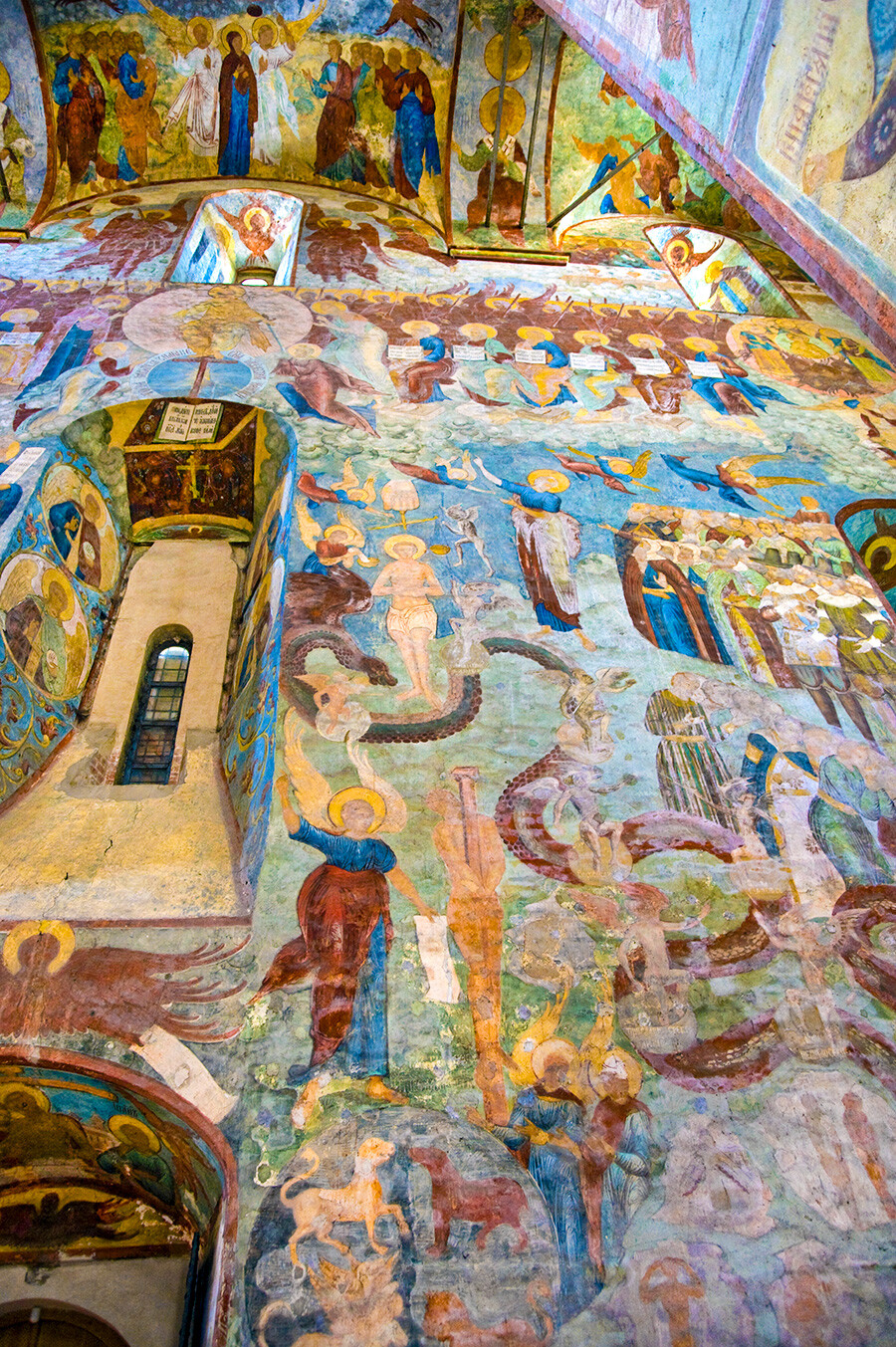 It is the frescoes, however, that rank among the masterpieces of 17th-century Russian art. The most spectacular display is on the west wall, which contains a vivid ‘Last Judgment’, with Christ enthroned and Satan seated in hell at the bottom right. In the middle, souls are being weighed, with the righteous on the right hand of Christ separated from the sinful on his left. 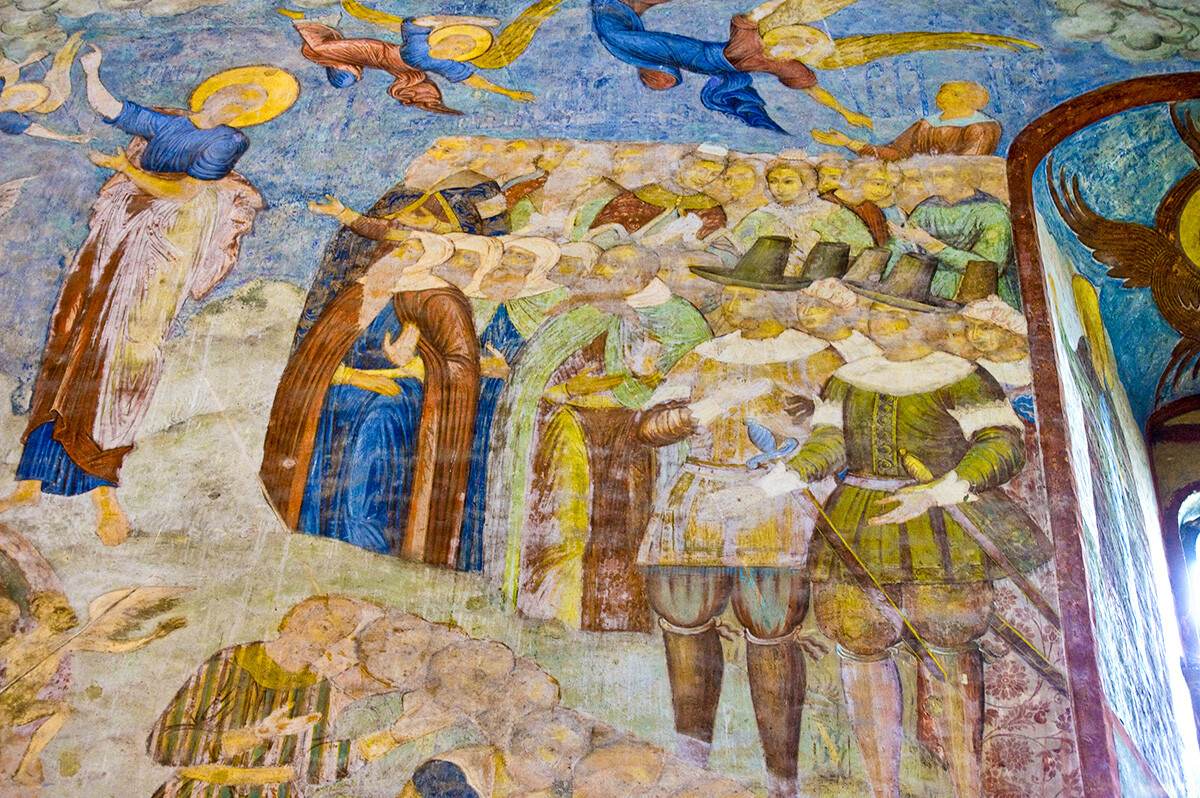 The sinners stand in a group as Moses turns toward them and gestures toward the Orthodox Savior. A serpent banded with inscriptions of sins descends to the fiery pit of hell (this section of the fresco has been damaged by ground moisture seepage into the lower wall). 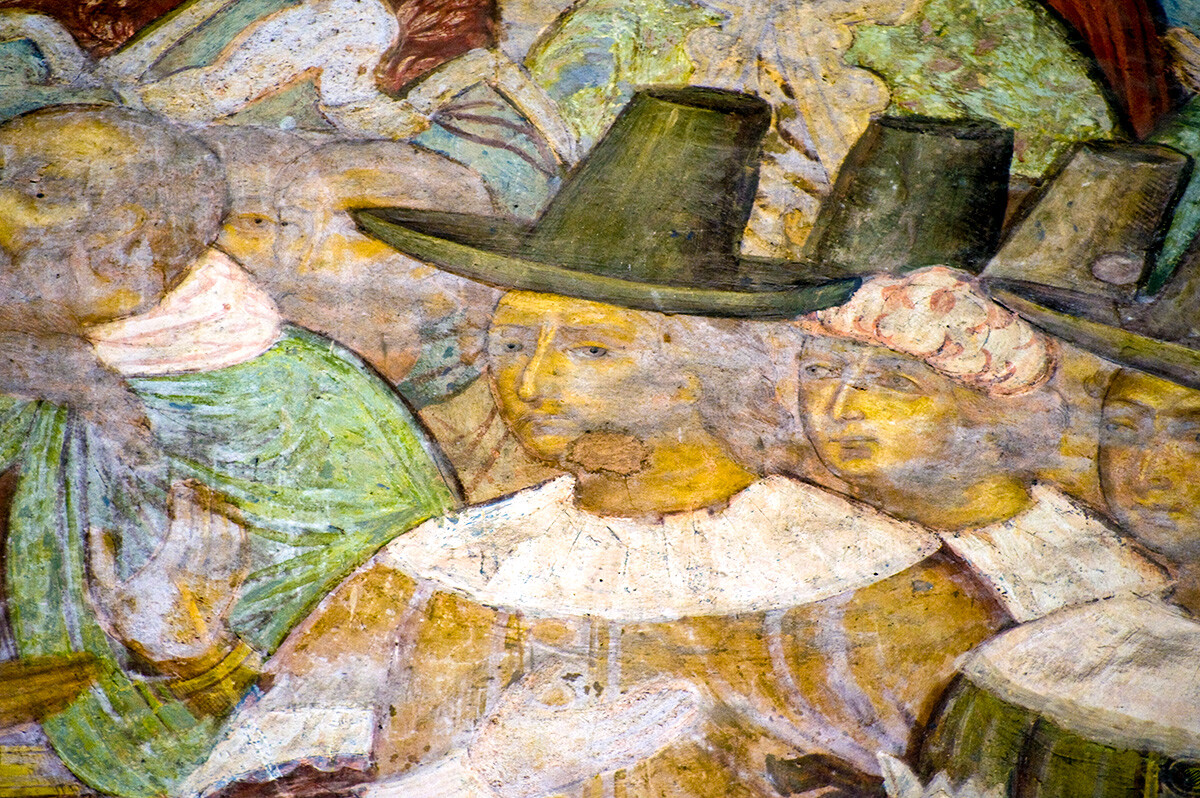 Among the condemned are elegantly dressed foreigners, infidels who threaten Orthodoxy - a view of the world formed during Russia’s long isolation and its incessant border wars. Particularly notable is a Protestant man in a tall-crowned hat known as a ‘capotain’ (or, in America, the ‘Pilgrim’s Hat’), worn in northwestern Europe in the 17th century. 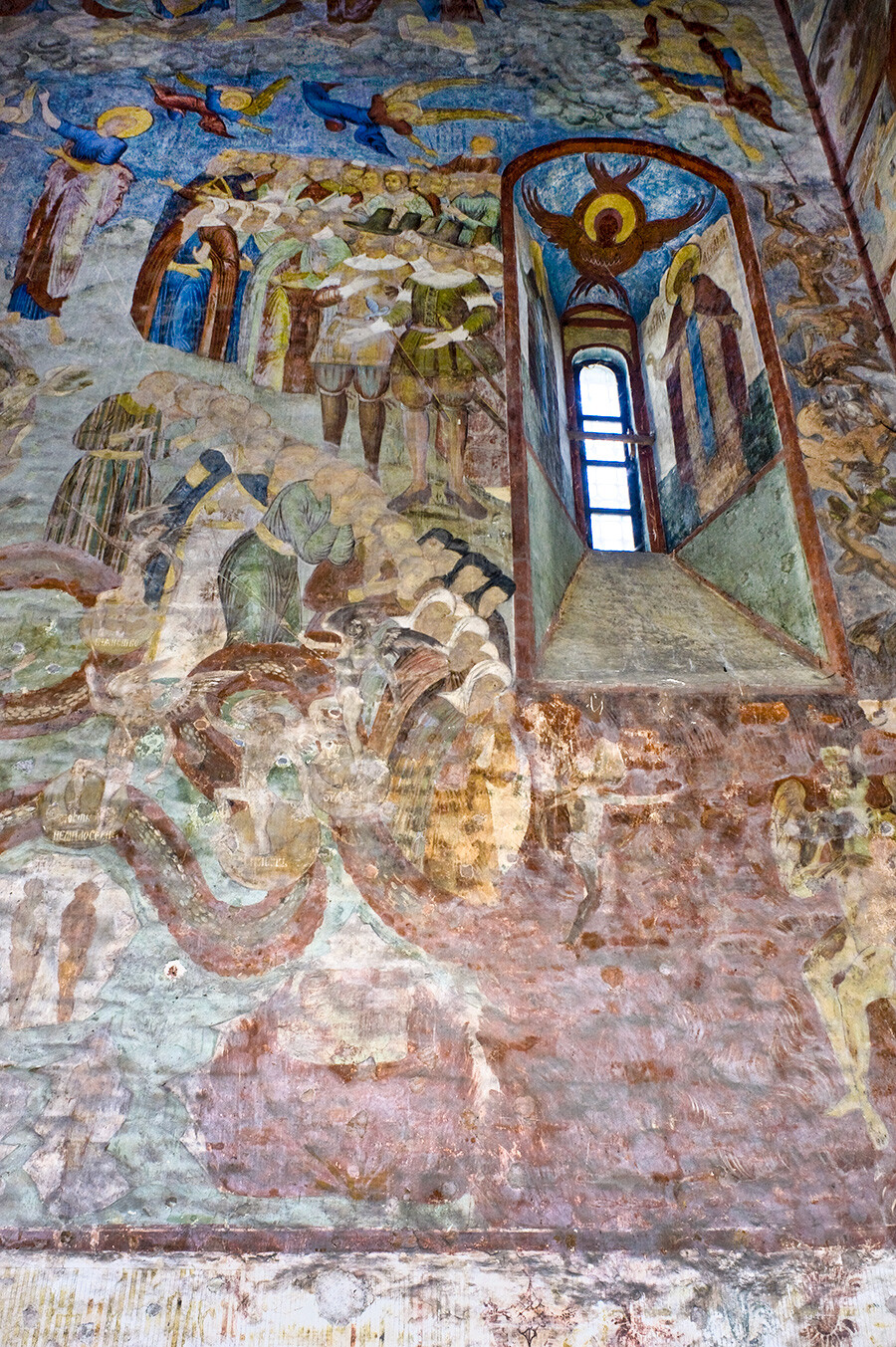 The perfect irony here is that, in the early 1690s, shortly after these magnificent frescoes were painted, the young Tsar Peter Alekseevich (later Peter the Great) would keep company with Protestant Europeans in Moscow’s “German Quarter”, created by the Orthodox Church in the mid-17th century to restrict foreign influence. During the formative 1690s, Peter came to see the advanced technology and well-governed states of Protestant Europe as a model for Russia. The cosmic vision portrayed in Vologda’s Sophia Cathedral was on a collision course with a modern, secular view of Russia’s place in the world promulgated by Tsar Peter. 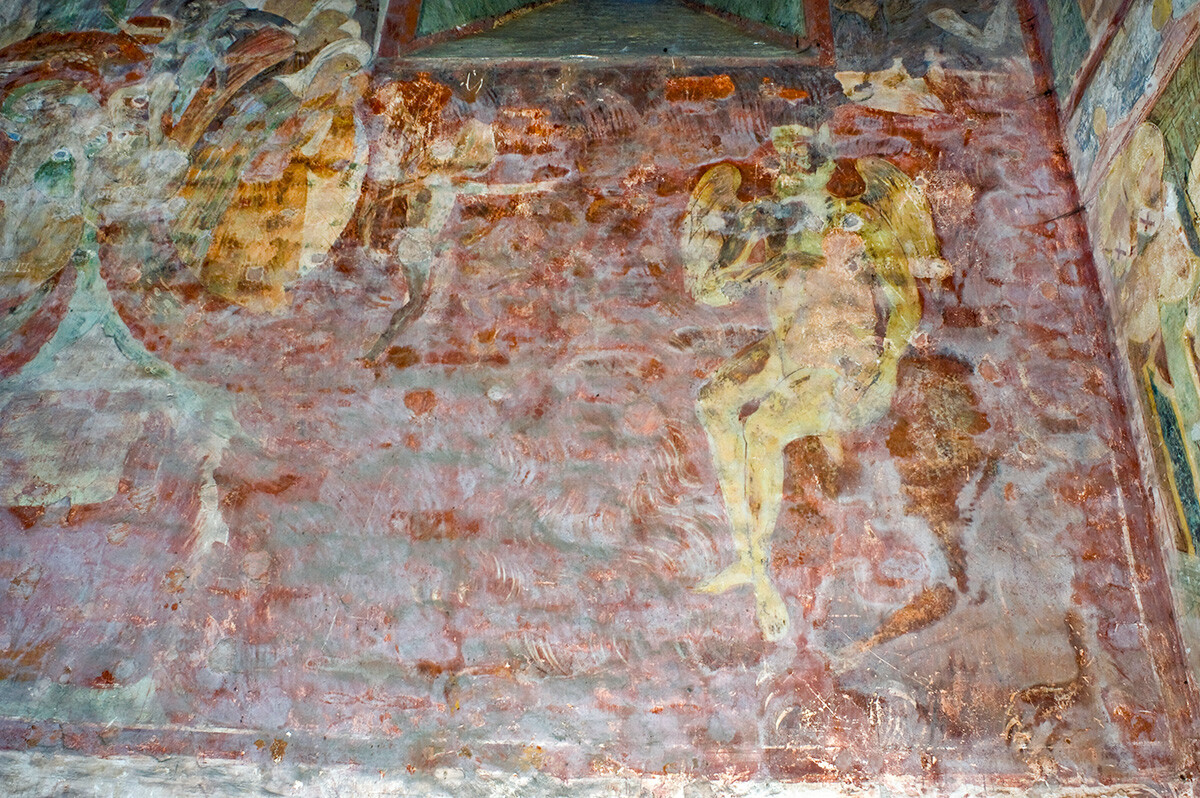 In the early 20th century, the Russian photographer Sergey Prokudin-Gorsky developed a complex process for color photography. Between 1903 and 1916, he traveled through the Russian Empire and took over 2,000 photographs with the process, which involved three exposures on a glass plate. In August 1918, he left Russia and ultimately resettled in France where he was reunited with a large part of his collection of glass negatives, as well as 13 albums of contact prints. After his death in Paris in 1944, his heirs sold the collection to the Library of Congress. In the early 21st century, the Library digitized the Prokudin-Gorsky Collection and made it freely available to the global public. A few Russian websites now have versions of the collection. In 1986, the architectural historian and photographer William Brumfield organized the first exhibit of Prokudin-Gorsky photographs at the Library of Congress. Over a period of work in Russia beginning in 1970, Brumfield has photographed most of the sites visited by Prokudin-Gorsky. This series of articles juxtaposes Prokudin-Gorsky’s views of architectural monuments with photographs taken by Brumfield decades later.