Pidma and Liavlia: Towering log churches of the Russian north 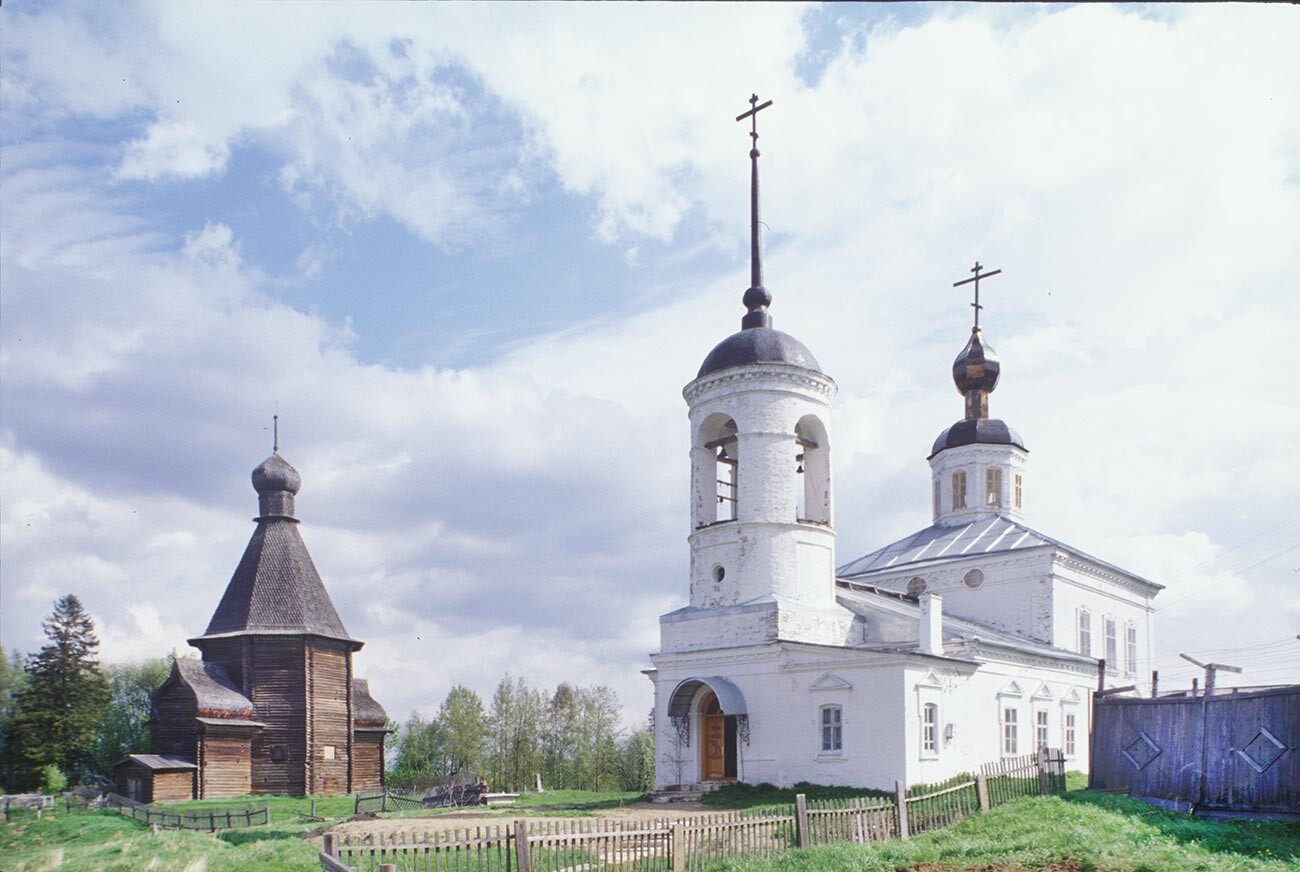 At the beginning of the 20th century, Russian chemist and photographer Sergey Prokudin-Gorsky developed a complex process for vivid color photography. His vision of photography as a form of education and enlightenment appeared with special clarity in his images of Russia’s architectural heritage.

As part of his journeys, in June and July of 1909, Prokudin-Gorsky received a commission from the Ministry of Transportation to take photographs along the Mariinsky Waterway in northwestern Russia. This water route, which connected St. Petersburg with the Volga River basin, was initiated by Peter the Great to supply his new capital - founded in 1703 - with grain and other essential commodities from the interior of the country. 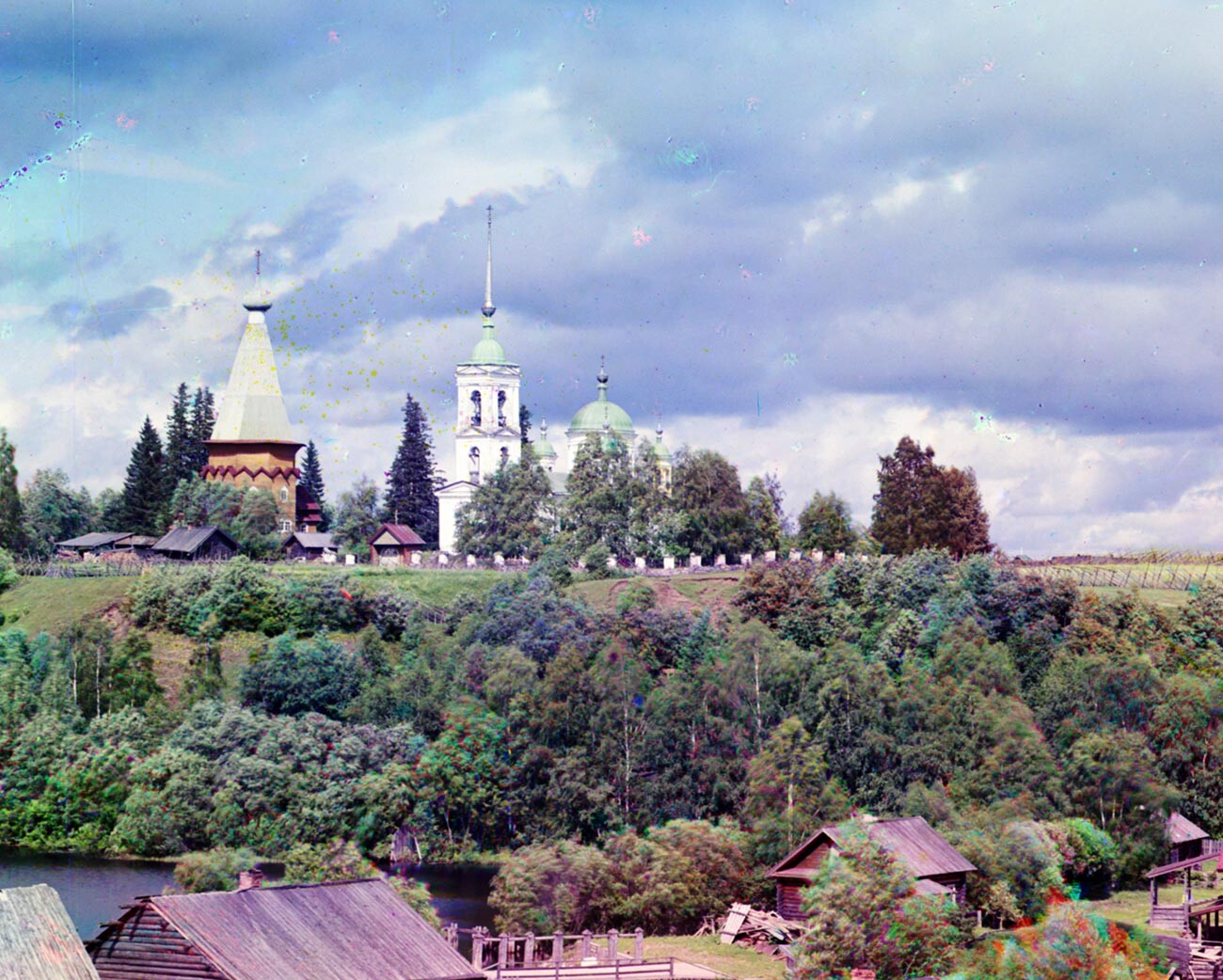 The Mariinsky Waterway was further developed during the reign of Emperor Paul (1796-1801), who named it after his consort, Empress Maria Feodorovna. The upper part of the system extended from the Neva River at St. Petersburg to Lake Ladoga, then via the Svir River to the southern part of Lake Onega.

Lost, but not forgotten 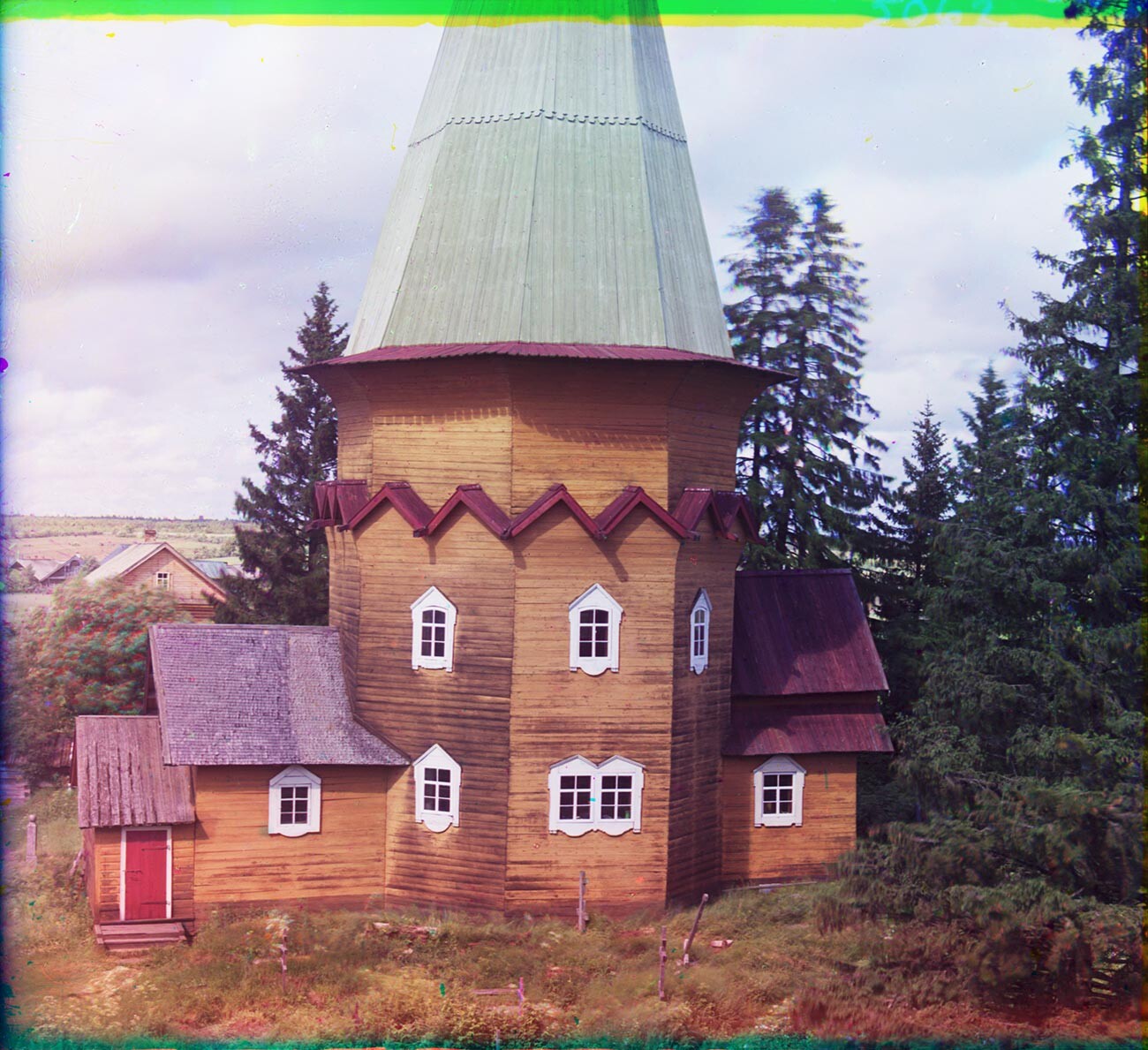 Pidma, a 16th-century settlement situated near the middle of the Svir River, especially attracted Prokudin-Gorsky’s attention with its remarkable log Church of the Transfiguration, a large octagonal structure built in the 1690s. This monument was destroyed by fire in April 1942, during the Finnish occupation of the village (from September 1941 to May 1944). During the 19th century, Pidma actively served river traffic and even gained a flour mill. A brick church, also dedicated to the Transfiguration, was built in 1830 and expanded with two additional altars dedicated in 1862 to St. Alexander of Svir and St. Varlaam Khutinsky.

After World War II, the damaged village declined and, in the 1970s, state support for social services, such as the local school, was terminated. The population fell to some 20 souls, primarily elderly. Fortunately, Prokudin-Gorsky had taken several photographs of the log Church of the Transfiguration in 1909, including distant views that show the adjacent white brick church. Closed in 1937 and further ruined by fire in 2003, the brick Church of the Transfiguration was rebuilt in 2007-09 and is a visible landmark. 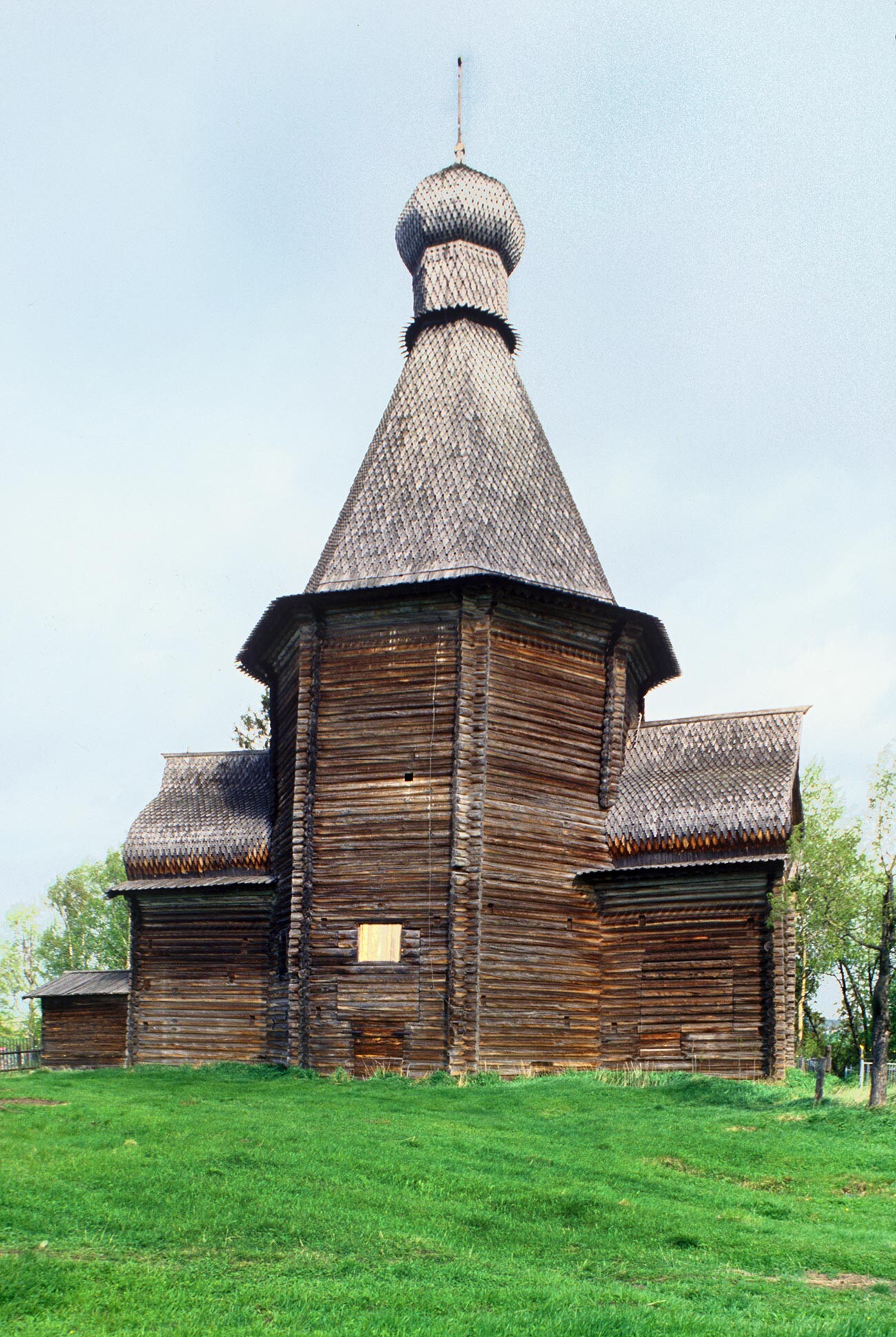 Although the log Church of the Transfiguration at Pidma has been lost forever, Prokudin-Gorsky’s photographs show a highly distinctive form, in which the tower rises as an octagonal structure straight from the foundation. Usually, octagonal log church towers in the Russian North rise from a rectangular base structure, but there are rare surviving examples that resemble the lost Pidma church. 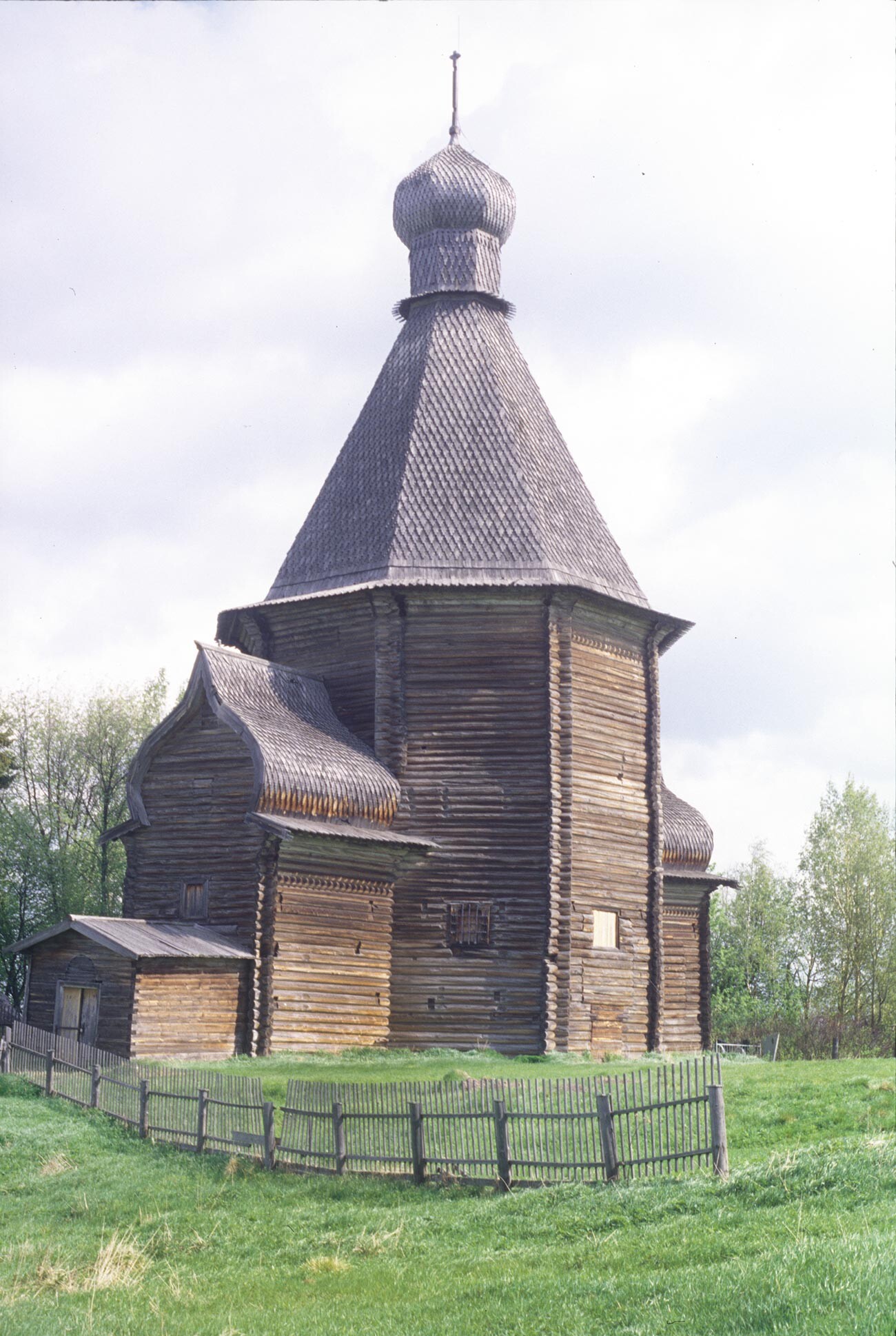 The most remarkable is the late 16th-century Church of St. Nicholas at the village of Liavlia, on the right bank of the Northern Dvina River 35 km to the southeast of the port city of Arkhangelsk. As at Pidma, the Liavlia church serves as a landmark on high ground.

The village of Liavlia is situated near the confluence of the small Liavlia River with the Dvina. Because of persistent erosion of the riverbanks, the inhabitants of Liavlia eventually retreated to the neighboring village of Khorkovo, which serves as the alternative official name of the settlement. 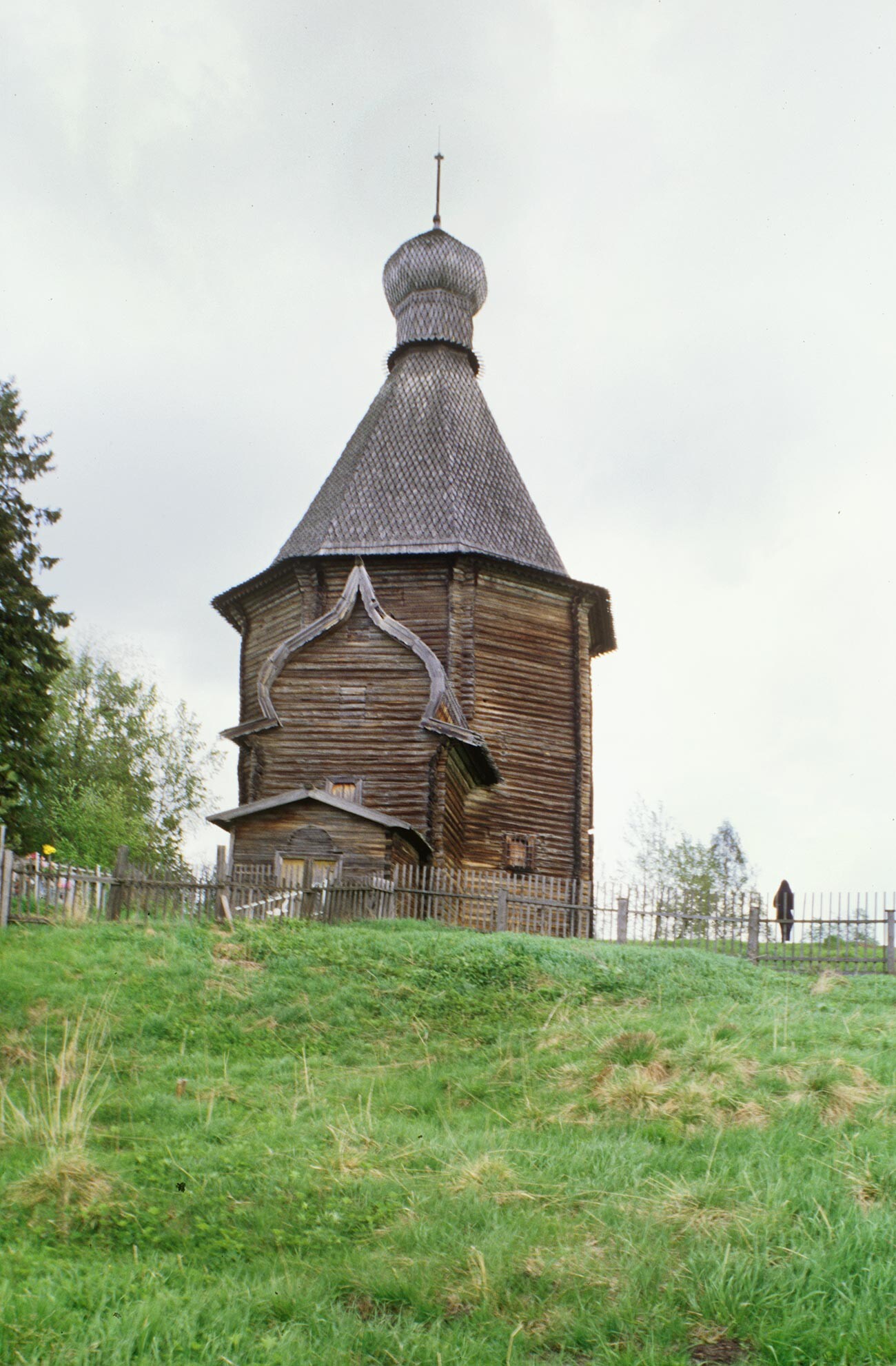 With ancient trading links to the medieval commercial city of Novgorod, Liavlia was already in the 14th century the site of a monastery dedicated to the Dormition of the Virgin. In 1339, Grand Prince Ivan Kalita, wishing to extend Moscow’s influence in the area, commissioned for the monastery a manuscript of the Gospels that is one of the earliest Russian parchment works. When the Liavlia monastery was subordinated in 1633 to the larger Monastery of Saint Antony Siisky (located on the opposite side of the Dvina), the manuscript was transferred there. Known as the Siisky Gospels, it is now a treasure of the Academy of Sciences Library in St. Petersburg. 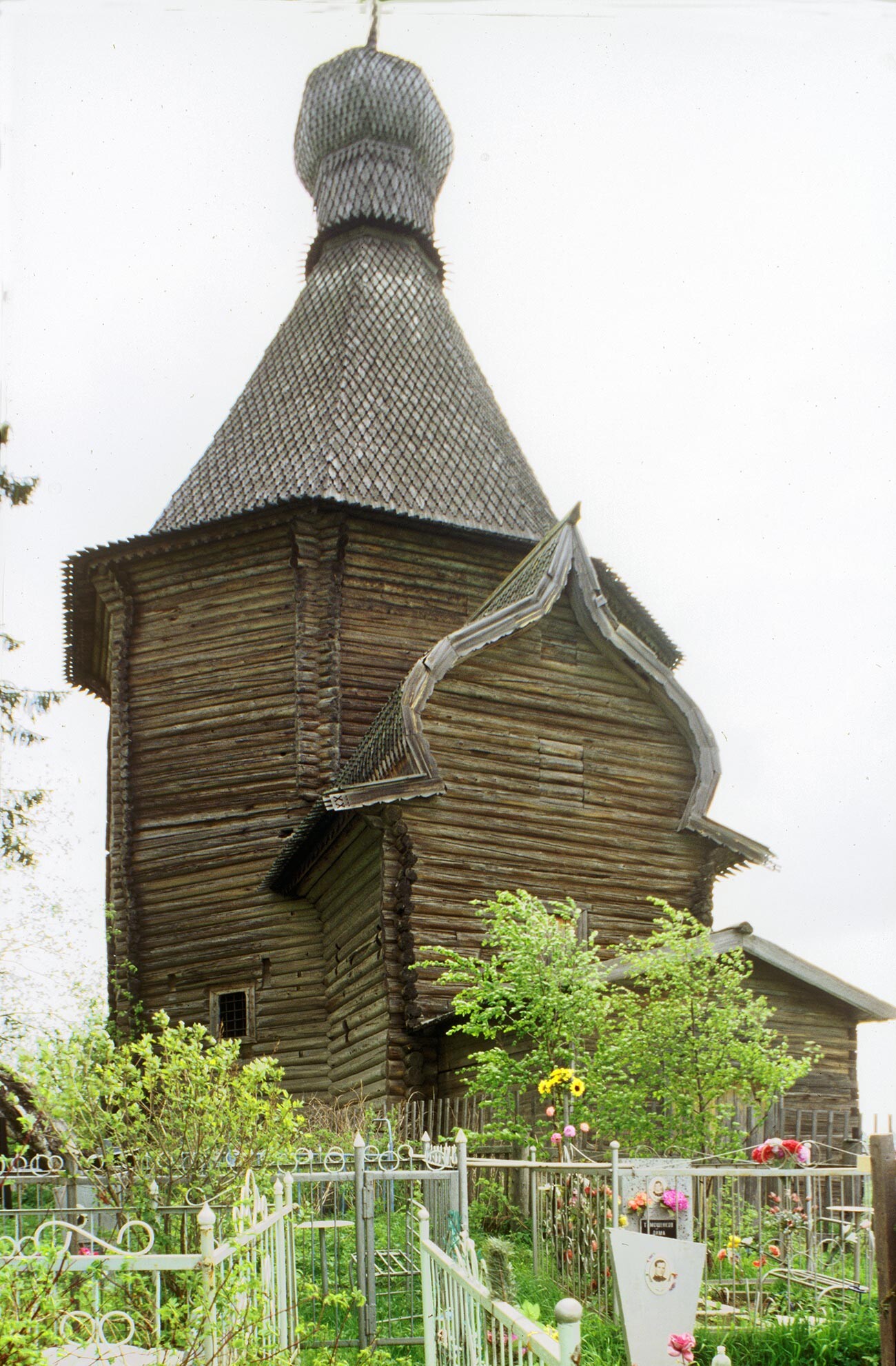 In the 16th century, the Liavlia monastery contained two wooden churches, the Dormition and St. Nicholas. A fire in 1580 led to the building of a new log Church of the Dormition, whose archaic form survives as a rare display of a church built from the ground up as an octagonal tower. 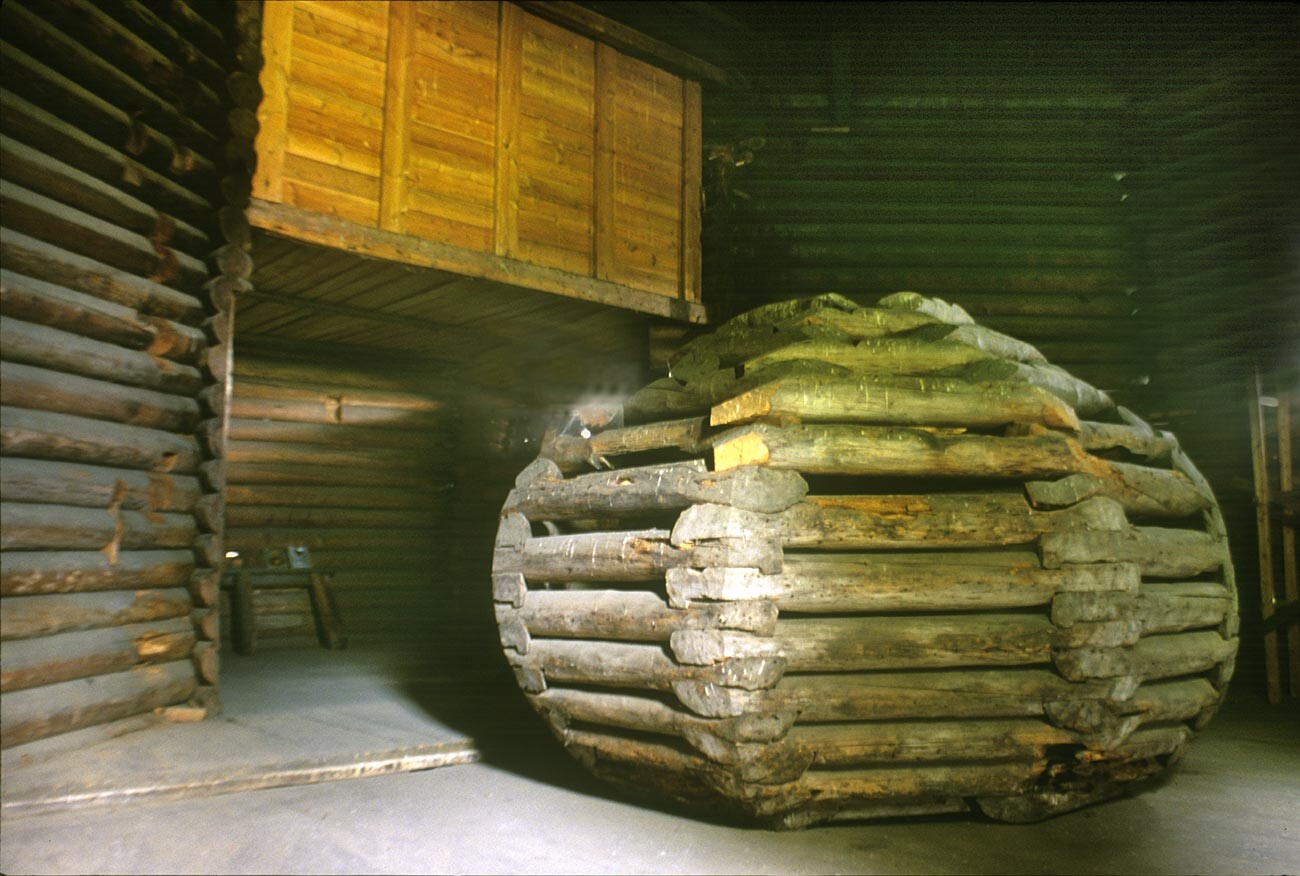 The massive log tower rises to an elevated “tent” crown supporting a large cupola. The east and west sides have extensions for the apse and vestibule, crowned with barrel gables. The west end originally had an elevated, cantilevered porch that enclosed the main entrance. Converted to a parish church in 1765 after the closure of the Liavlia monastery, the Dormition Church was shuttered in 1805, due to structural decay. A brick Church of the Dormition had already been built nearby in 1804 to serve the parish. 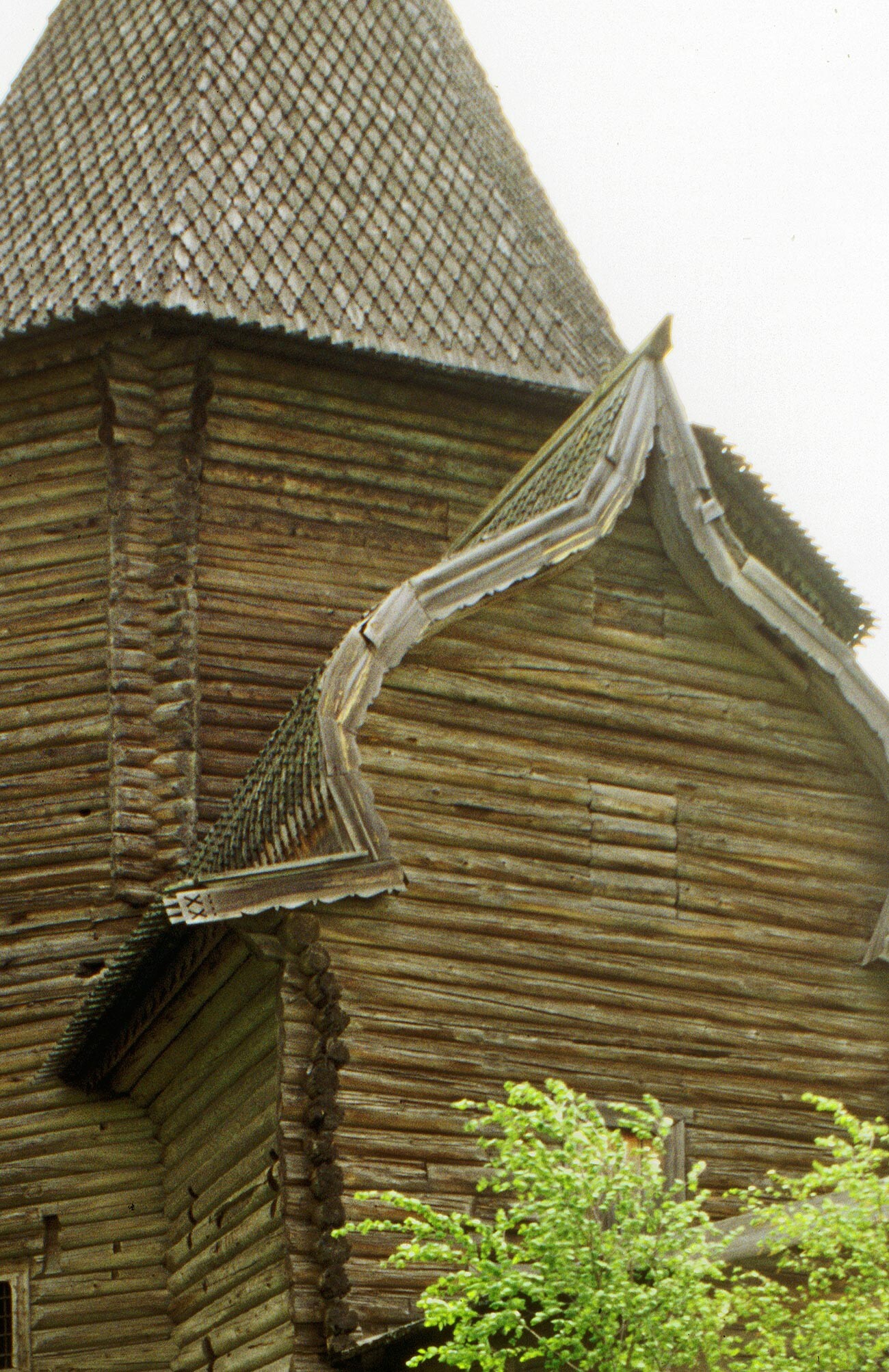 That might have meant the ultimate demise of the log Dormition Church. But, in 1844, the governor-general of Arkhangelsk, Marquis Alexander de Traversay (1780-1850), visited the village and decided to restore the massive log structure. Although, this was a remarkably noble gesture, the crude approach to “preservation” meant that 2 1/2 meters of decaying logs at the base were simply discarded and the remaining part of the octagonal church reassembled. Therefore, the imposing tower would originally have been 8 ft. higher.

From wood to brick 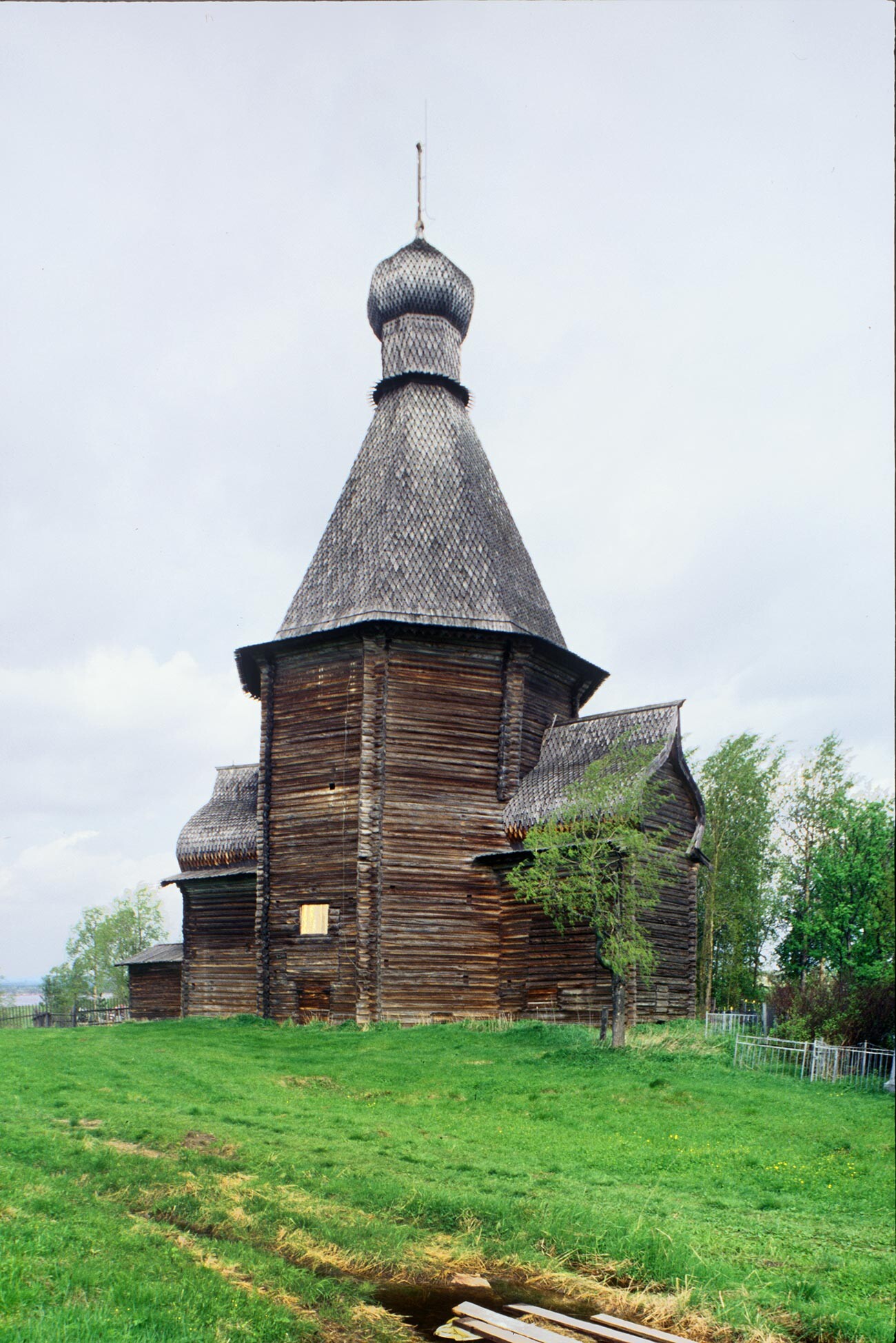 In 1845, the restored structure was reconsecrated as the Church of St. Nicholas, the name that it bears to this day. The church was later encased in plank siding and its “tent” tower was covered with tin roofing. During the Soviet period, the durable structure withstood various uses, including a garrison club. 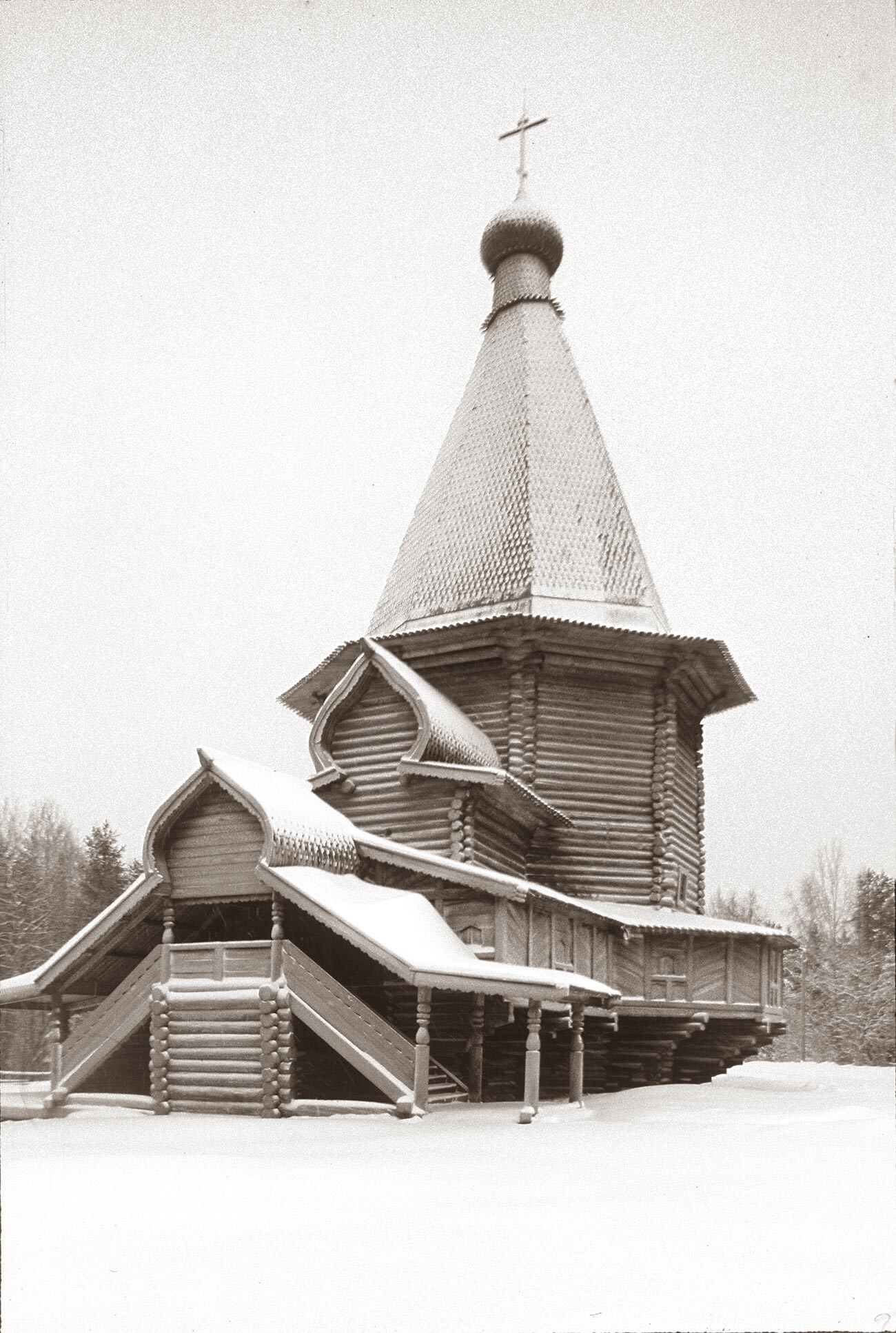 In the late 1960s, a careful restoration removed the planks and metal sheathing, rebuilt the cupola and placed the original cupola frame - a valuable example of traditional log design - within the church as a museum display. Practical considerations did not allow for a reconstruction of the original height of this tower church. In the 1970s the St. Nicholas church was affiliated with the adjacent Malye Korely outdoor museum of wooden architecture, which has its own example of an octagonal tower church, dedicated to St. George and originally located at the village of Vershina (Verkhnetoima District). (The base of the St. George Church is partially obscured by an elevated gallery supported by cantilevered logs). 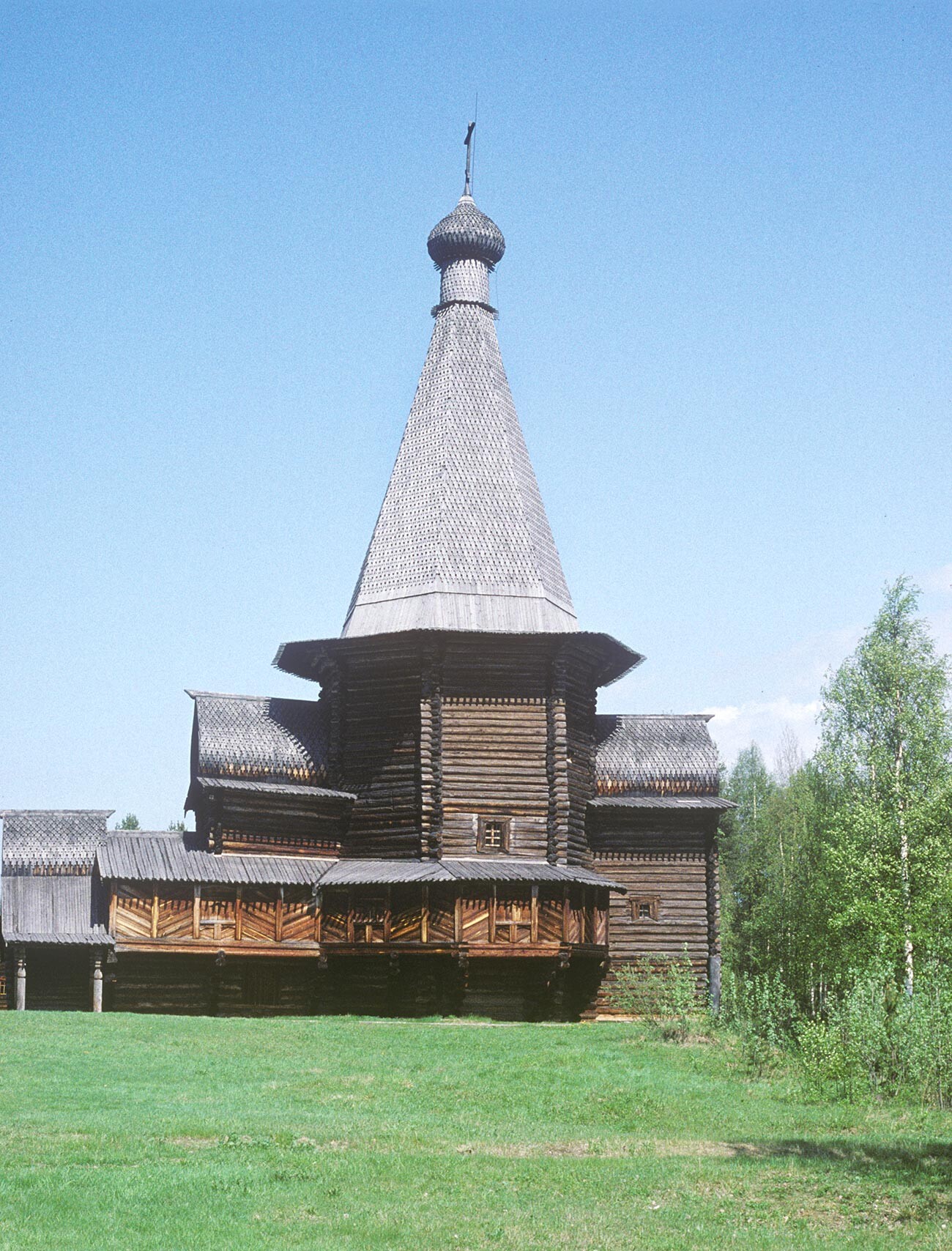 The northern practice of complementing an ancient log church with a much later brick structure is also visible at the opposite, northwestern, end of the city of Arkhangelsk. This area is characterized by a marshy terrain marked with shifting delta channels of the Northern Dvina River. One of the area’s larger islands is itself bisected by the small Zaostrovka River and is known as Zaostrovye (“beyond the island”). This land, nourished by frequent flooding, is the site of a preserved pairing of a log and a brick church near the village of Rikasovo. 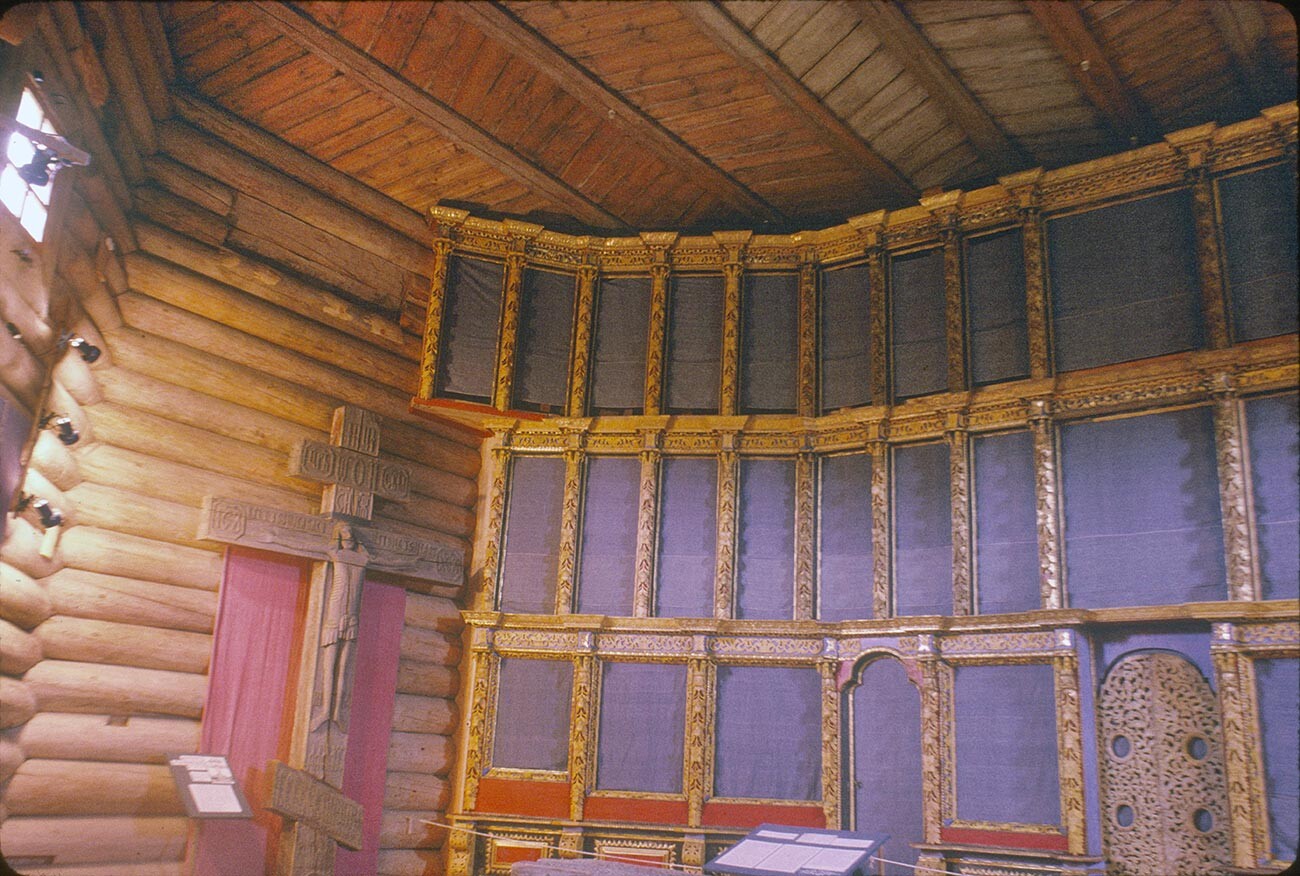 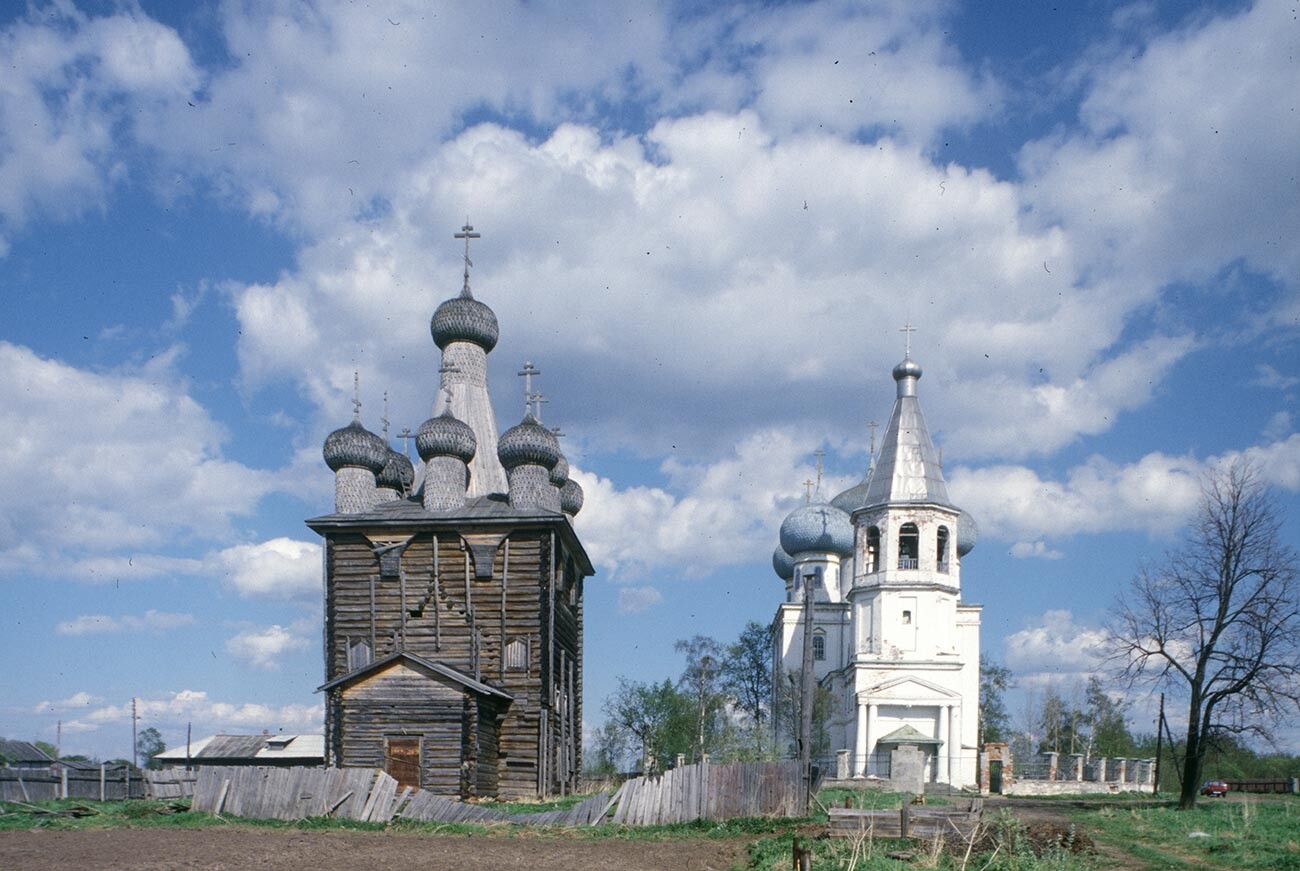 As at Liavlia and Pidma, the wooden church at Zaostrovye is the more striking form of the paired ensemble. Over the centuries, a number of wooden churches had existed in the village. In 1683, the parish was permitted to build a new church dedicated to the Purification, with secondary altars to Sts. Peter and Paul and the 2nd-century martyrs Sts. Florus and Laurus. 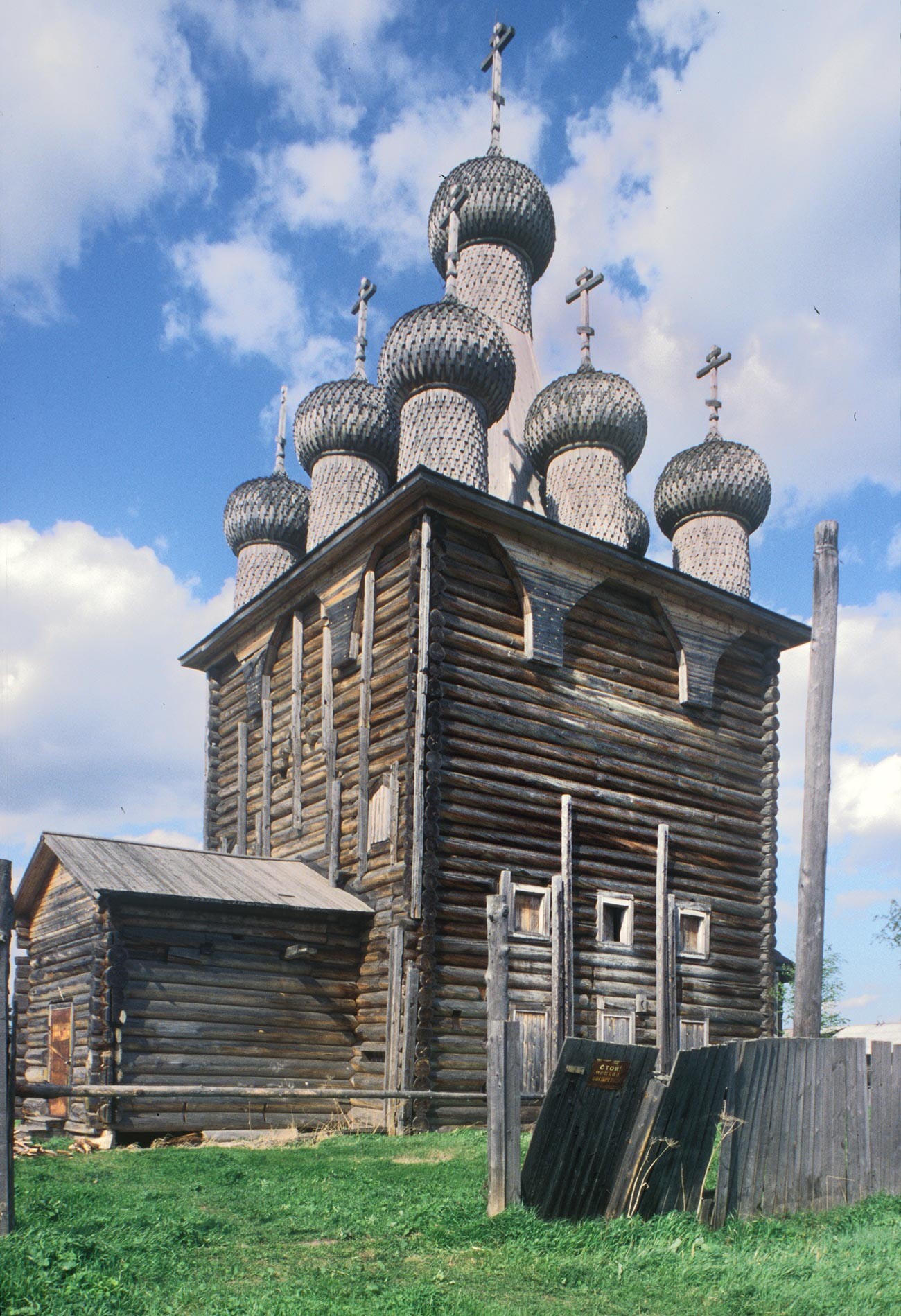 Zaostrovye. Log Church of the Intercession of the Virgin (originally dedicated to the Purification). Southwest view. June 10, 1998

The design of the Zaostrovye church is idiosyncratic, with a central cupola resting on a sloping octagonal tower whose roof base was surrounded by eight wooden cupolas on high drums. The original roof had a flowing gable line that enlivened the square plan of the basic structure.

In 1808, work began on a brick Church of the Purification to replace the wooden structure as the parish church. The wooden Purification Church, closed for decades, was repaired and reconsecrated in 1864 as the Church of the Intercession of the Virgin. Over the next half century, its highly unusual form was modified and disfigured. 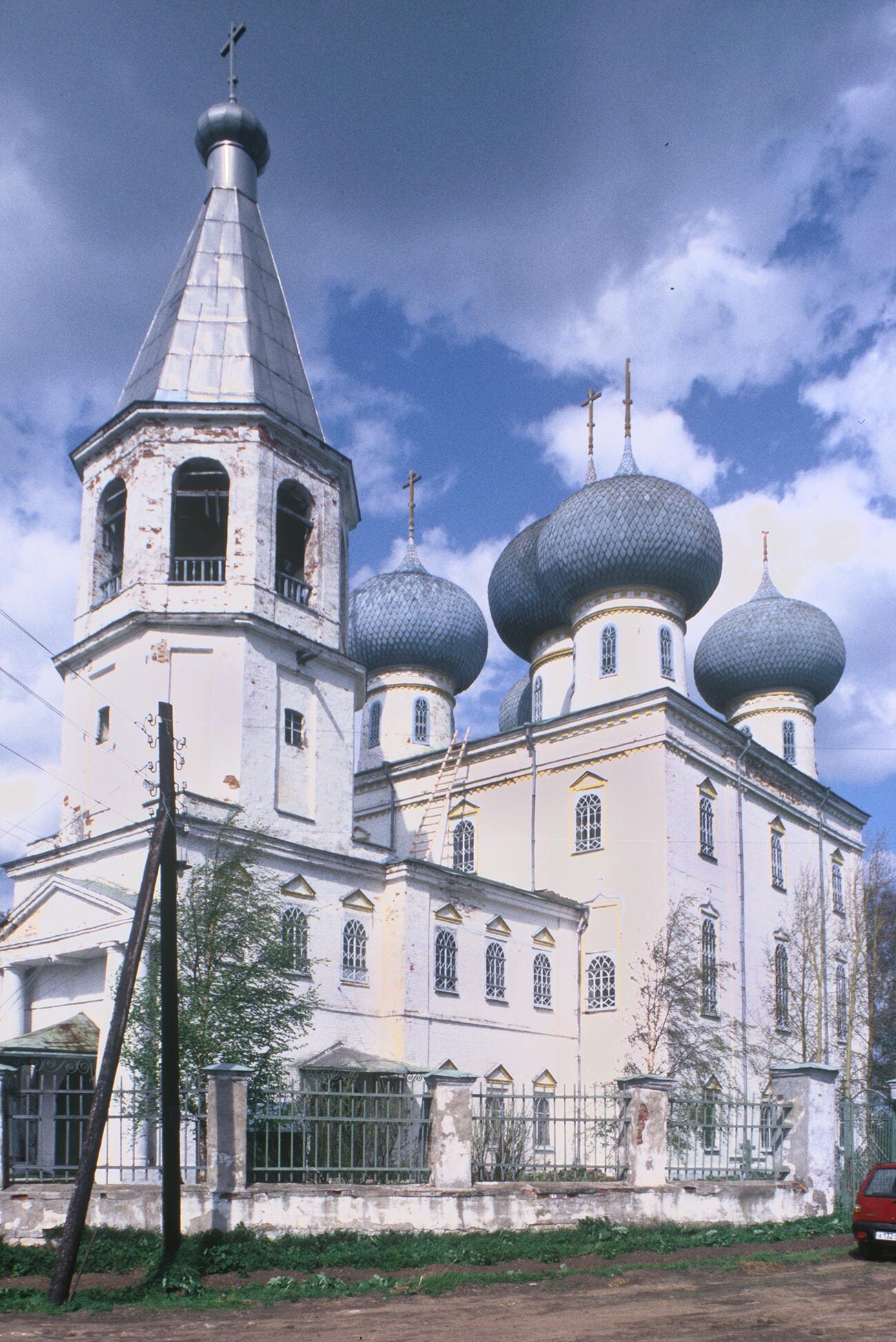 Closed during the Soviet period, the Church of the Purification/Intercession was the object of major work in the late 1960s that restored much of its earlier form. Even so, the work was never completed and necessary maintenance has been neglected. The parish uses the reopened masonry church, whose traditional white form is crowned with five cupolas.

From Pidma to Liavlia and Zaostrovye, river villages comprise a history of human presence along the northern Russian waterways. Their log churches are the ultimate testimony to the natural environment that sustained them. 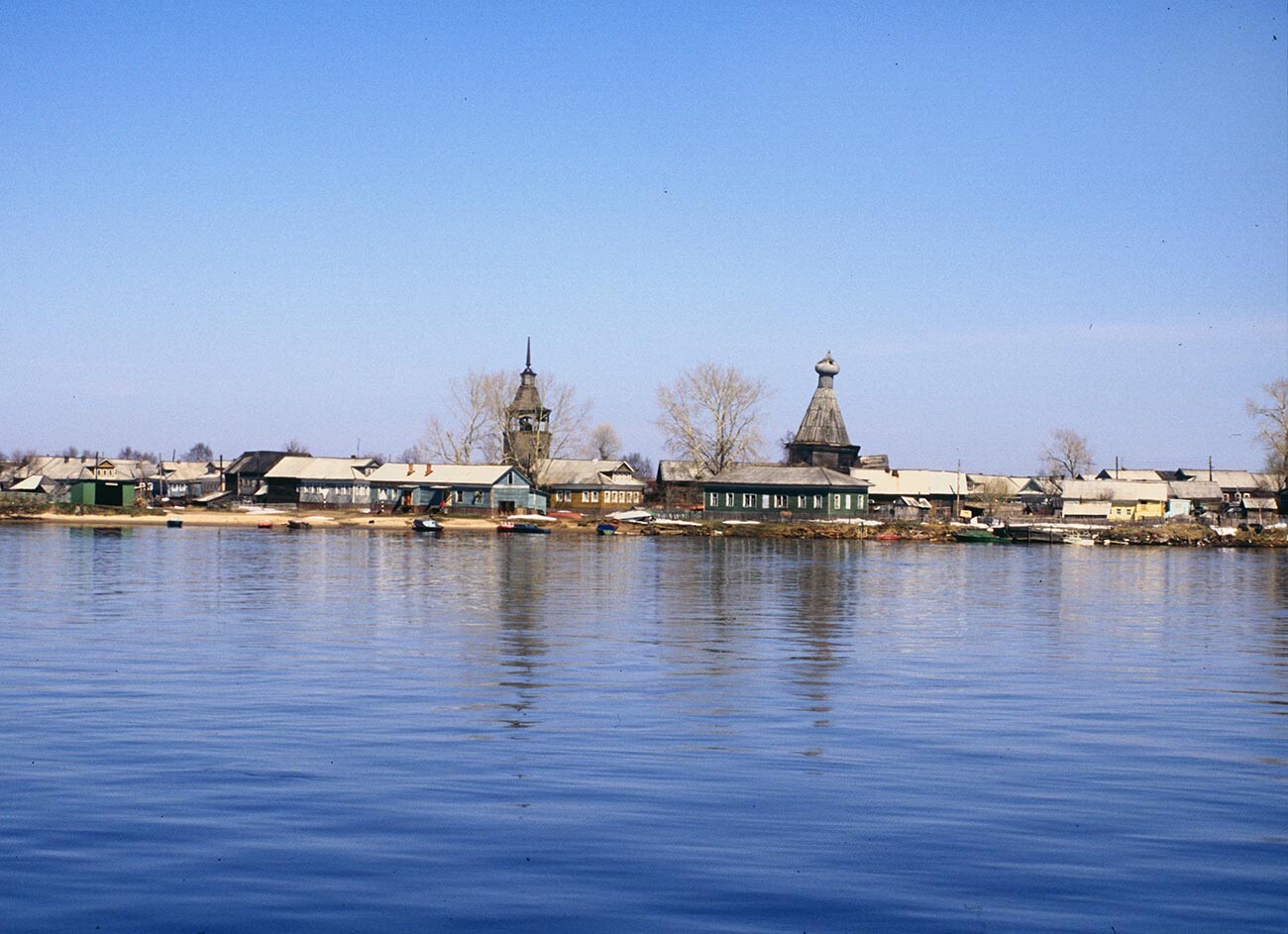