The story behind the BREATHTAKING abandoned Aniva lighthouse (PHOTOS) 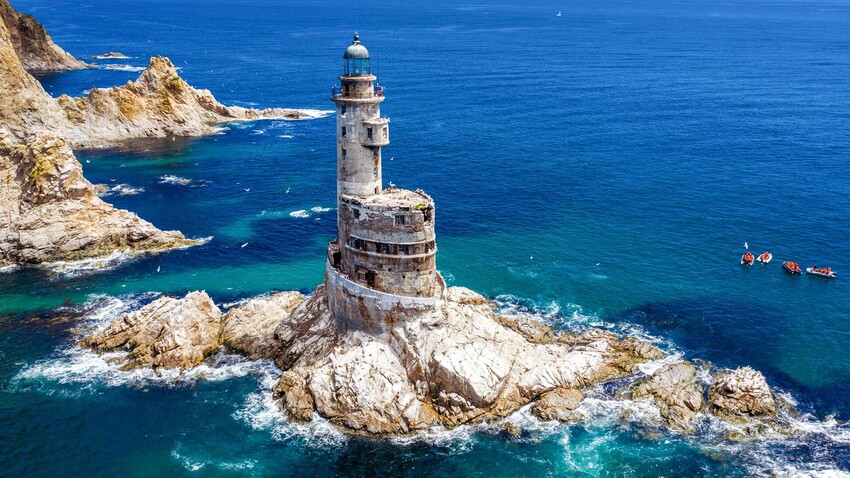 Sergei Krasnoukhov / TASS
In Russia’s Far East, an abandoned lighthouse towers over the Sea of Okhotsk. Although it is hard to access, it still manages to attract a lot of tourists.

The Aniva lighthouse is one of the most inaccessible lighthouses in Russia. For years, it had been warning ships off the dangerous coast of the rocky Aniva Cape in the Sea of Okhotsk. Today, it stands abandoned, but remains a highly popular tourist attraction.

In Russia’s Far East, on Russia’s largest island Sakhalin, there is a lighthouse of unmatched beauty. The abandoned tower has a long history.

Before the Japanese were ousted from the Sakhalin island by the Russians in the final days of World War II, they had managed to erect a lighthouse on one of the most inaccessible places of the island - the Aniva Cape. 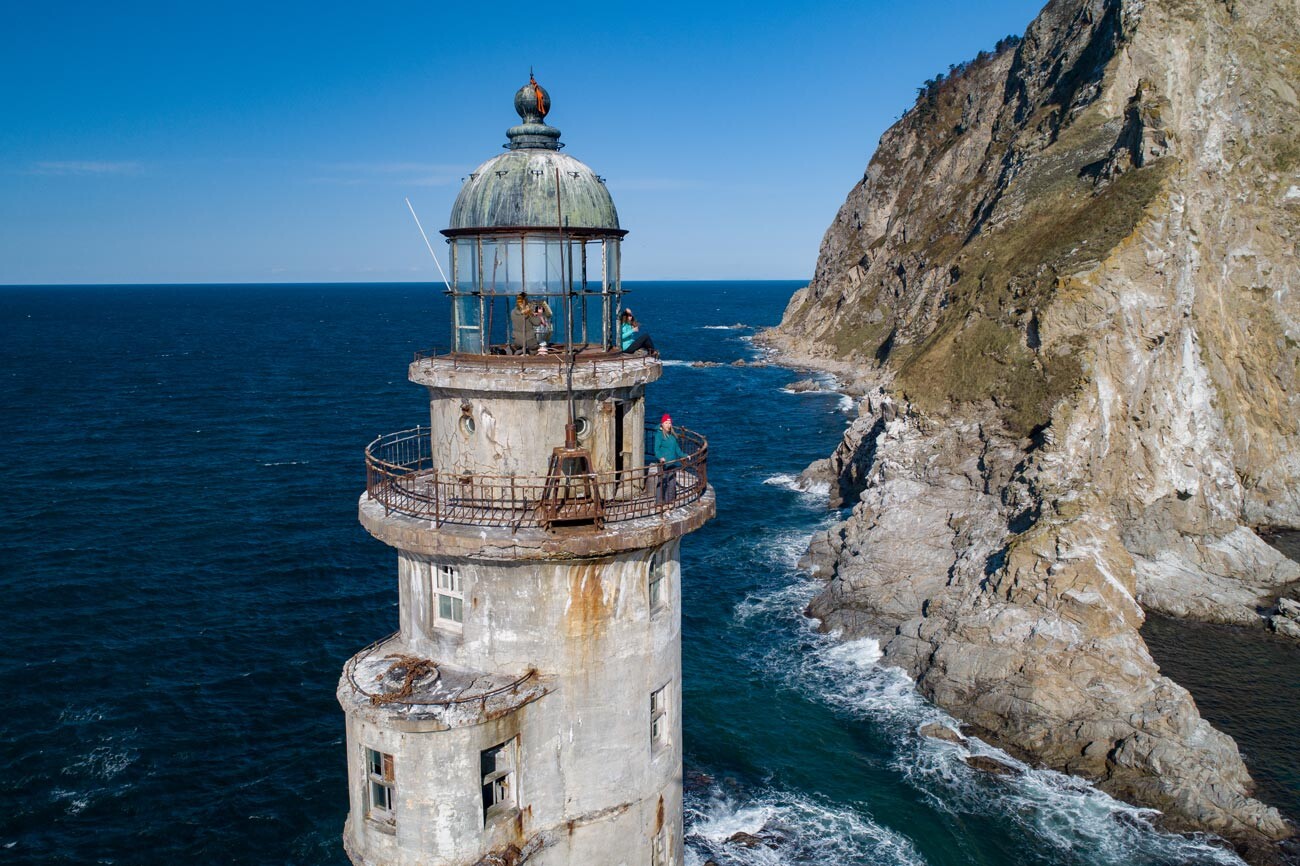 A Japanese engineer named Shinobu Miura designed the project. The construction began in 1937 and lasted for two years. In 1939, the Aniva lighthouse was erected on the hard-to-reach rocky cape of Aniva. The Japanese called the lighthouse ‘Nakashiretoko’ (中知床岬).

The lighthouse was necessary, because the waters in this corner of the world were a deadly trap for vessels: underwater currents, frequent fog and rocky shoals threatened to destroy ships that approached the cape.

A legend had it that when the Japanese constructors finished the project, a scaled-down copy of the lighthouse was presented to the Japanese emperor.

The Aniva lighthouse consists of a concrete round-shape tower with a lower outhouse. The tower is 31 meters tall and has nine floors. Initially, the first floor was designed as a storehouse for equipment and the second floor – as a room for radio communication. 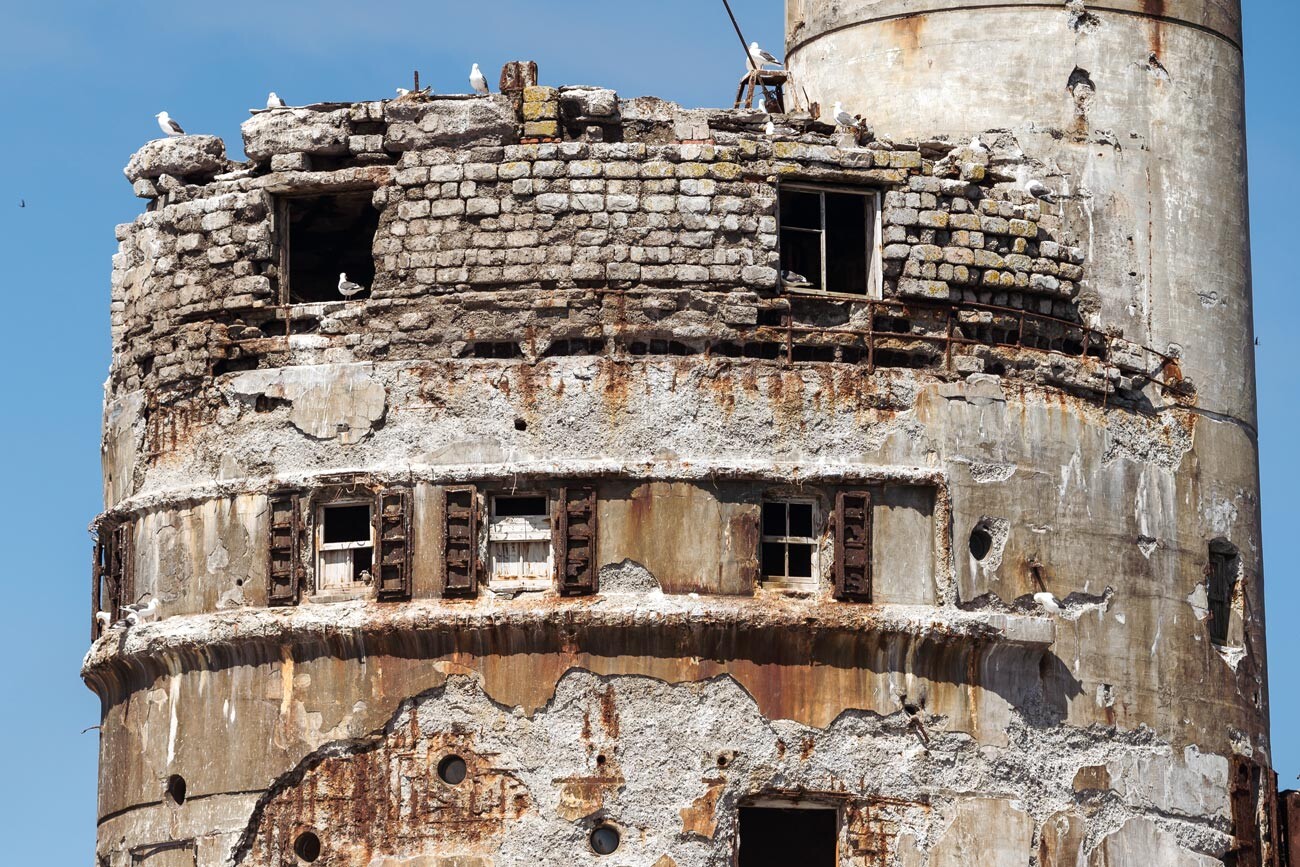 Floors from the third to the fifth were set aside for living quarters, complete with bunk beds, where up to 12 people could reside at the same time. The upper levels of the lighthouse were used as storage rooms. Finally, on the top floor, there was the light and a rotation mechanism powered mechanically with a 270-kilogram weight, which ran through the central part of the tower.

The light it produced was visible up to 19 nautical miles (35 kilometers) away.

In 1990, Russia recalled the personnel from the lighthouse, switching it instead to an automatic mode of operation. The lighthouse was equipped with radioisotope thermoelectric generators that powered it until 2006. Today, however, the structure stands unused and abandoned. 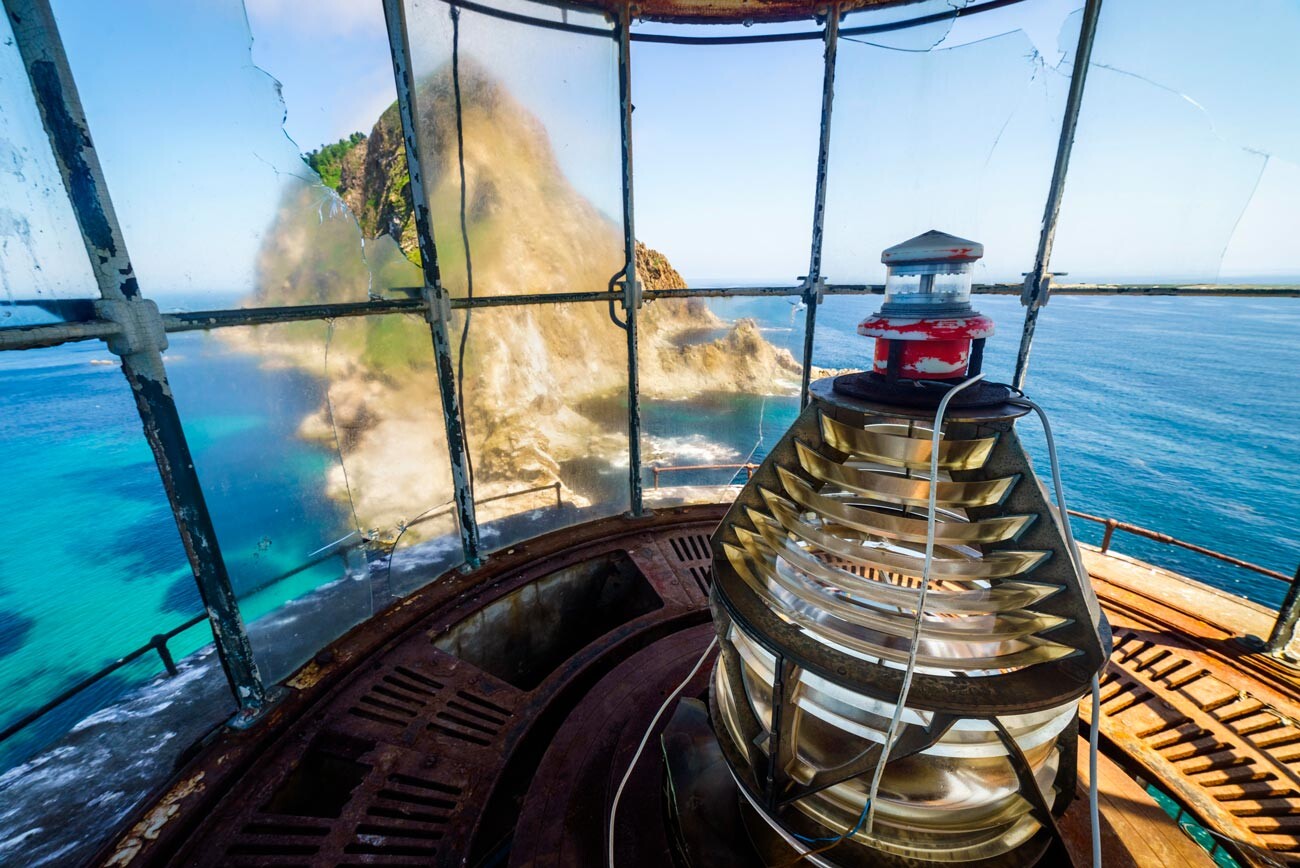 “The lighthouse is in satisfactory condition for now. It is still safe to visit, but it may soon become dangerous, as there are parts that have begun to deteriorate. While the tower is made of concrete, parts of the brickwork, metal doors and structures have begun to rust badly,” says Dmitri Kulikov, who provides travel services in Russia’s Far East. 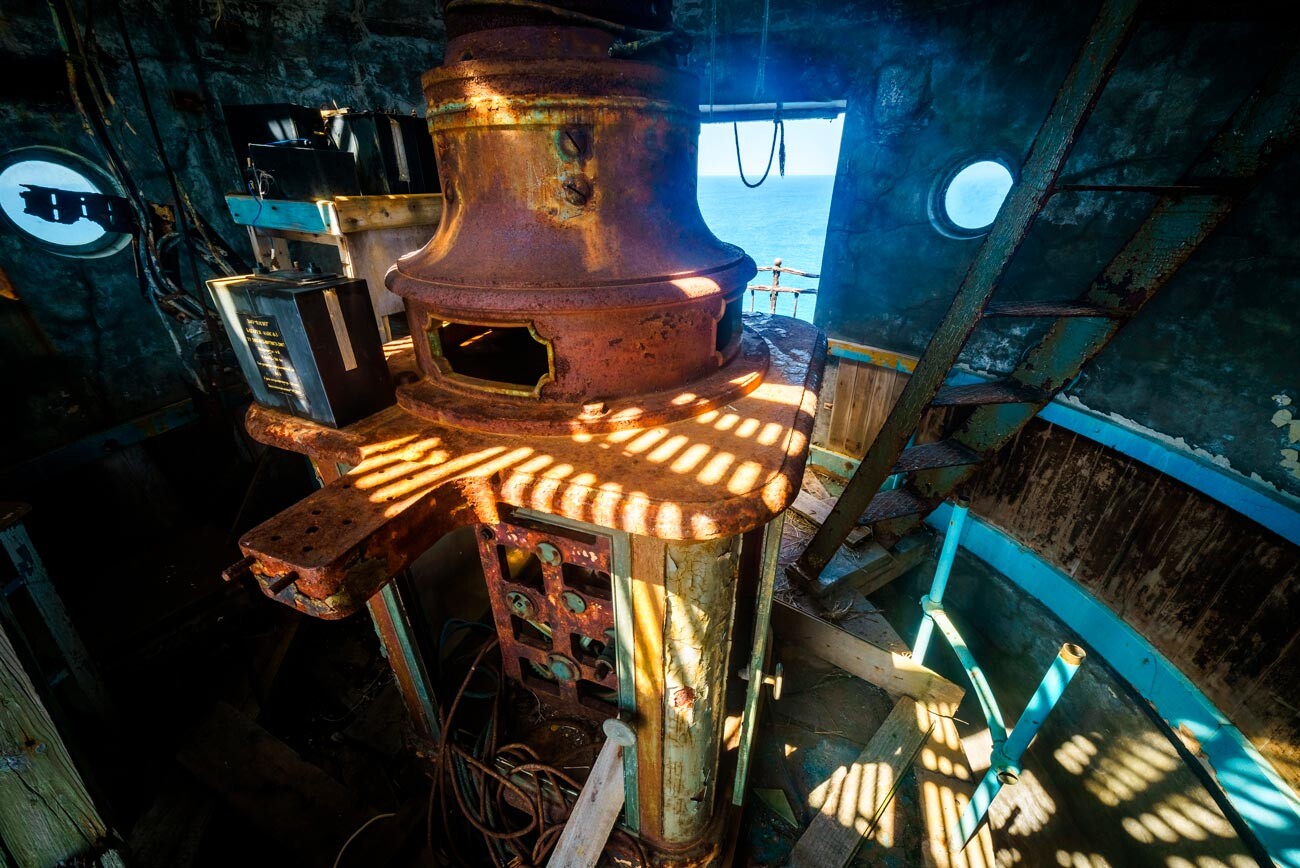 Despite poor conditions, the iconic lighthouse attracts hordes of visitors, who go there for breathtaking views, picturesque photos - and an adrenaline rush.

It’s a 1.5-hour ride from the closest settlement and then a two-hour boat trip on top of that to get to the Aniva Cape. Then, visitors have to climb a rock using ropes to approach the base of the lighthouse. No other easy path leads there. Yet, a reward awaits those who dare. 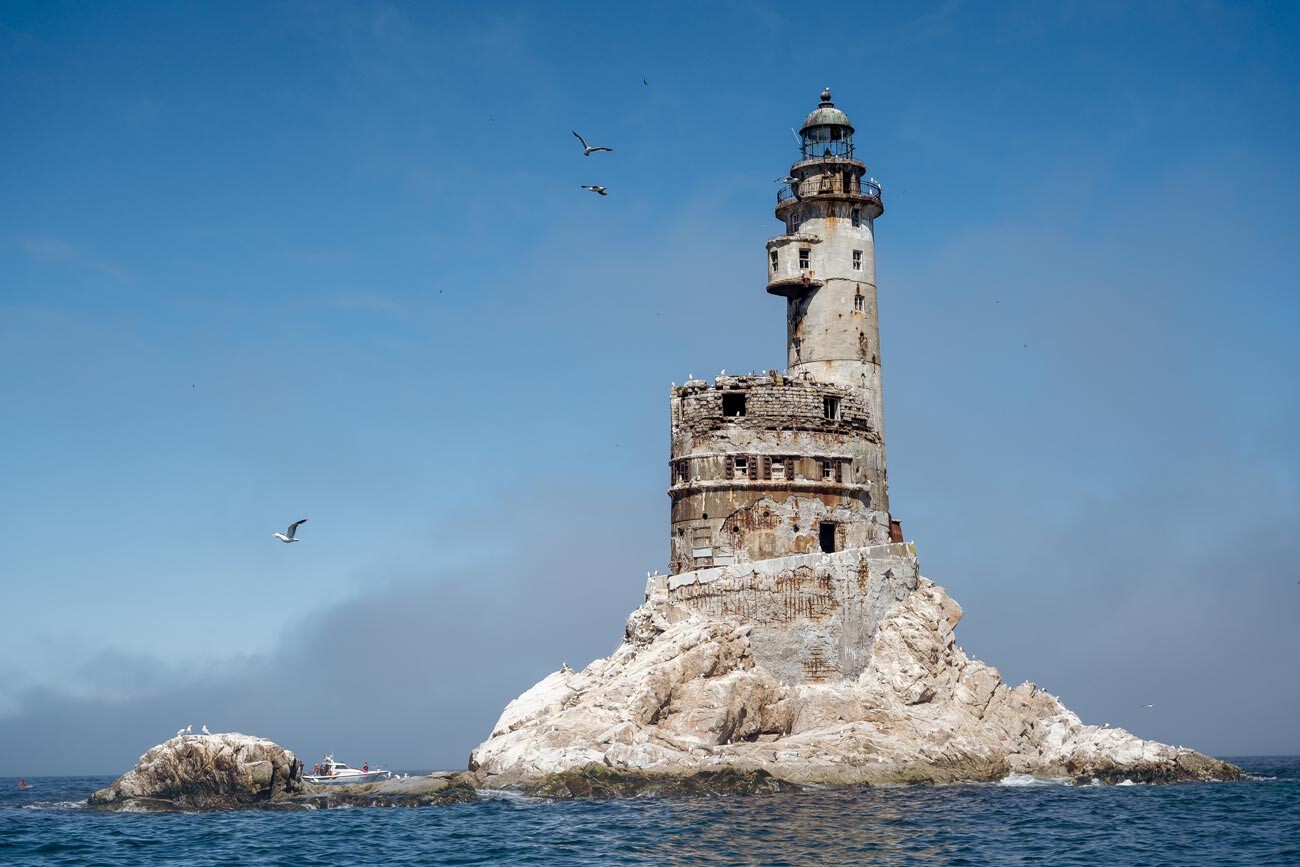 “When tourists get there for the first time, it always has a ‘wow-effect’ on them. The lighthouse looks epic: rugged, unyielding, it stands in the middle of the sea and overhangs a steep cliff. It’s completely gray now, but, if you look closely, you can see that it used to be colored in stripes. It conveys an impression of total abandonment. Seagulls nest on it,” says Kulikov.

Click here to check out the 5 most picturesque spots on Sakhalin Island (PHOTOS).