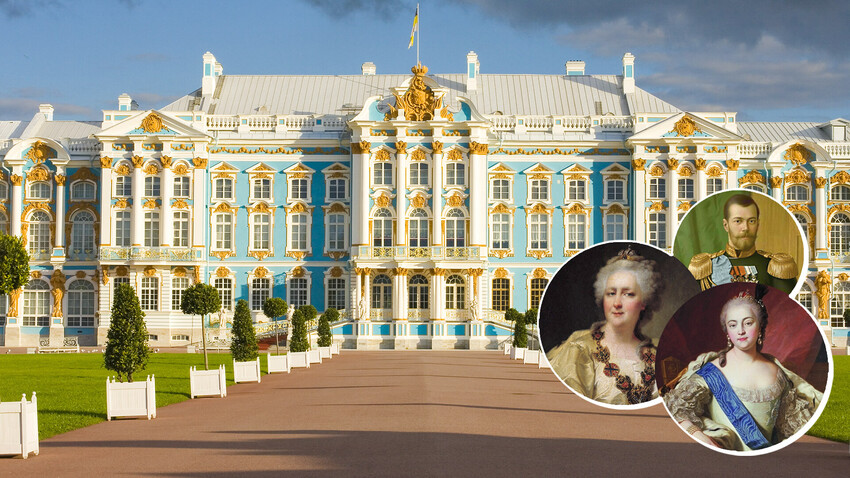 Legion Media
One of the most splendid Imperial summer palaces near St. Petersburg has seen a lot in its history, from 18th century opulence to Nazi occupation and its nearly total destruction.

1. The Palace of the first Russian empress

During the Great Northern War, Tsar Peter the Great recaptured the territories on the banks of the Neva River and the Gulf of Finland that had belonged to the Swedes. In 1703, he founded St. Petersburg on that spot. To the south of the new Russian capital was a small estate, which on Swedish maps was listed as Saaris moisio, or a place on a hill. In Russian it was called Sarskaya manor or Sarskoye Selo. In 1710, Peter began to build a palace there for his wife, Empress Catherine I. 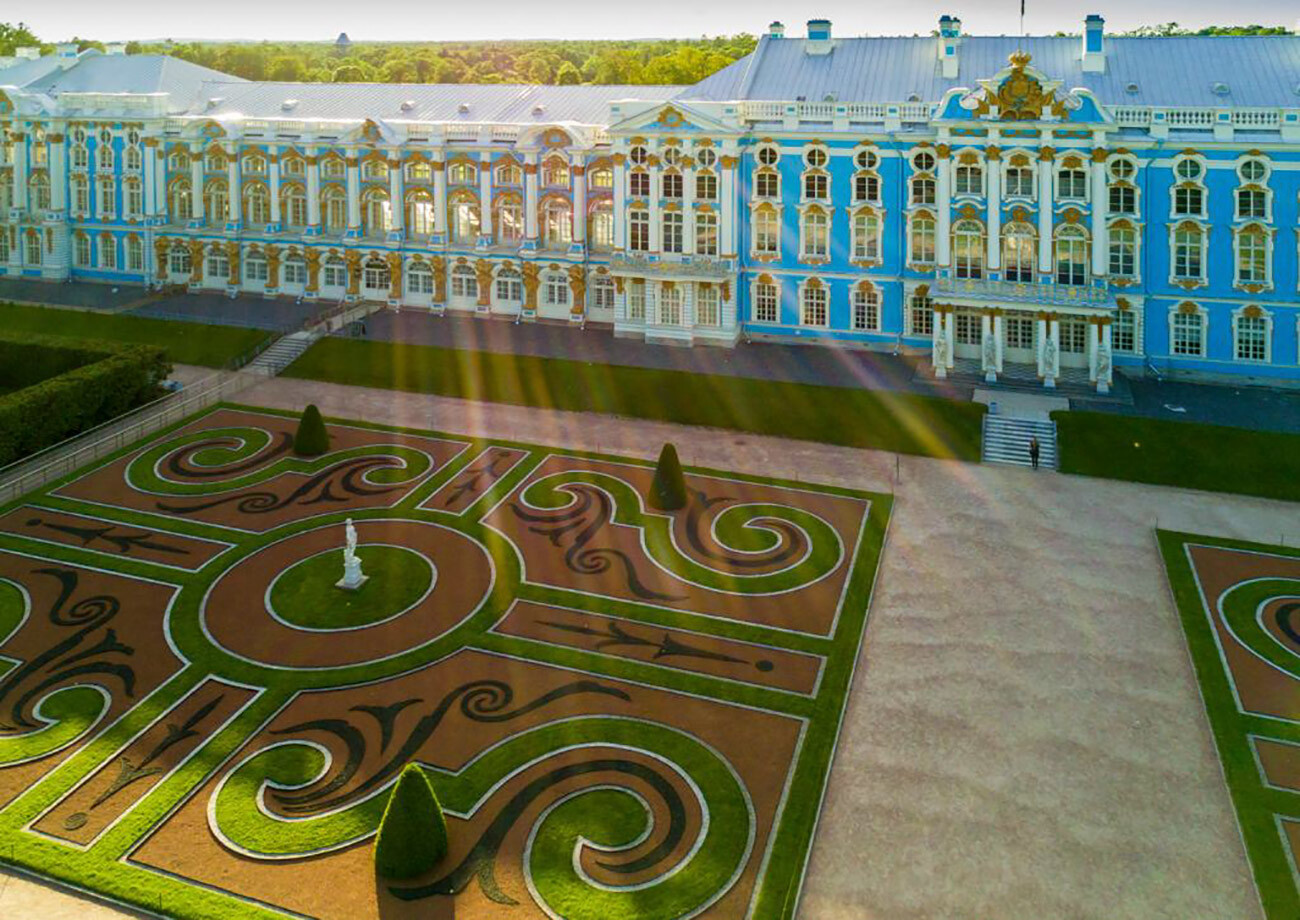 Tsarskoye Selo became the summer residence of the royal family. The heart of the estate, its calling card, is the Grand Catherine Palace. Originally, in the 1720s, it looked much more modest, built according to the ascetic style that Peter preferred. It acquired its present appearance a few decades later, in the mid-18th century. 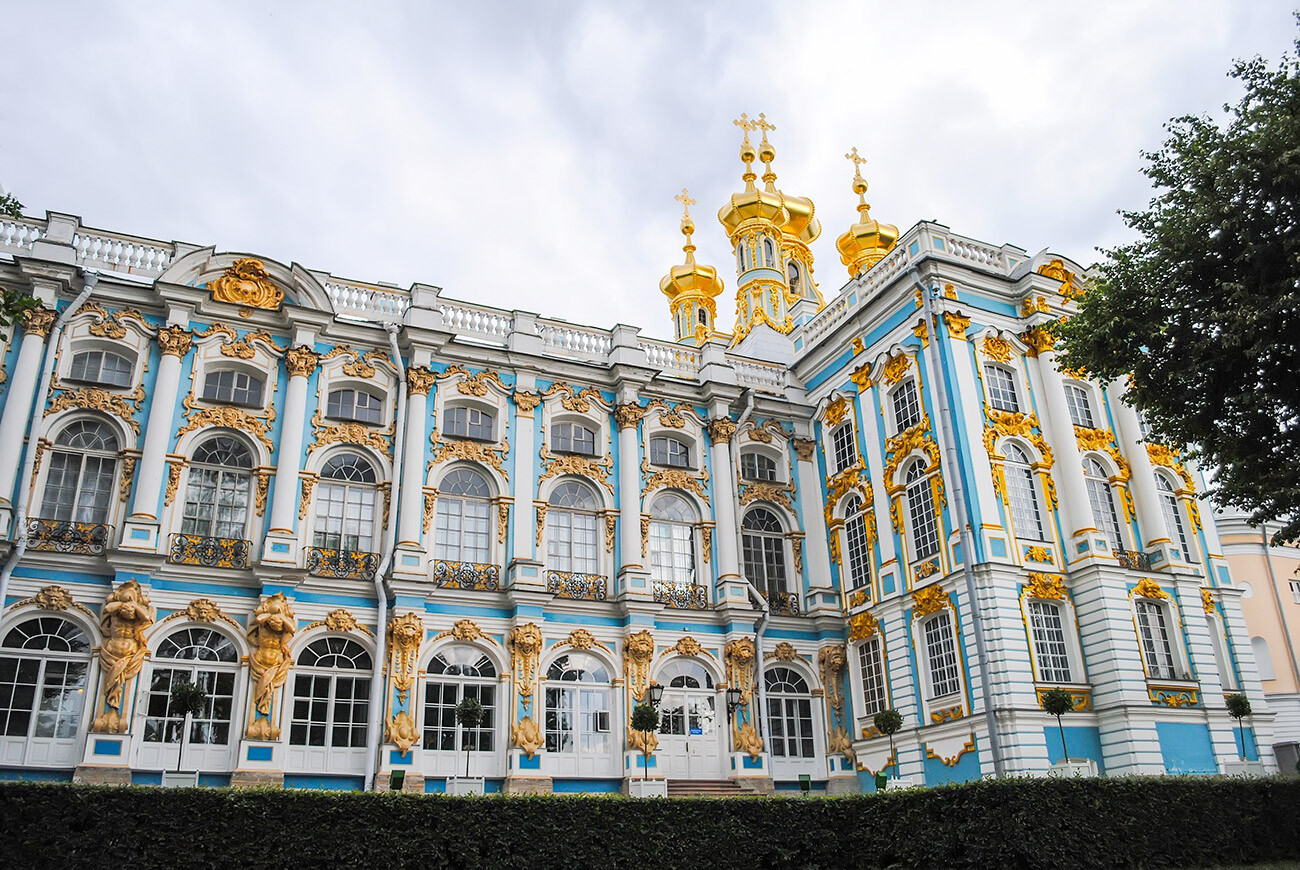 Catherine Palace and the Resurrection chapel

Peter the Great's daughter, Empress Elizaveta Petrovna, rebuilt the palace in her favorite baroque style with its characteristic opulent decoration. More than 100 kilograms of gold was needed to decorate it. 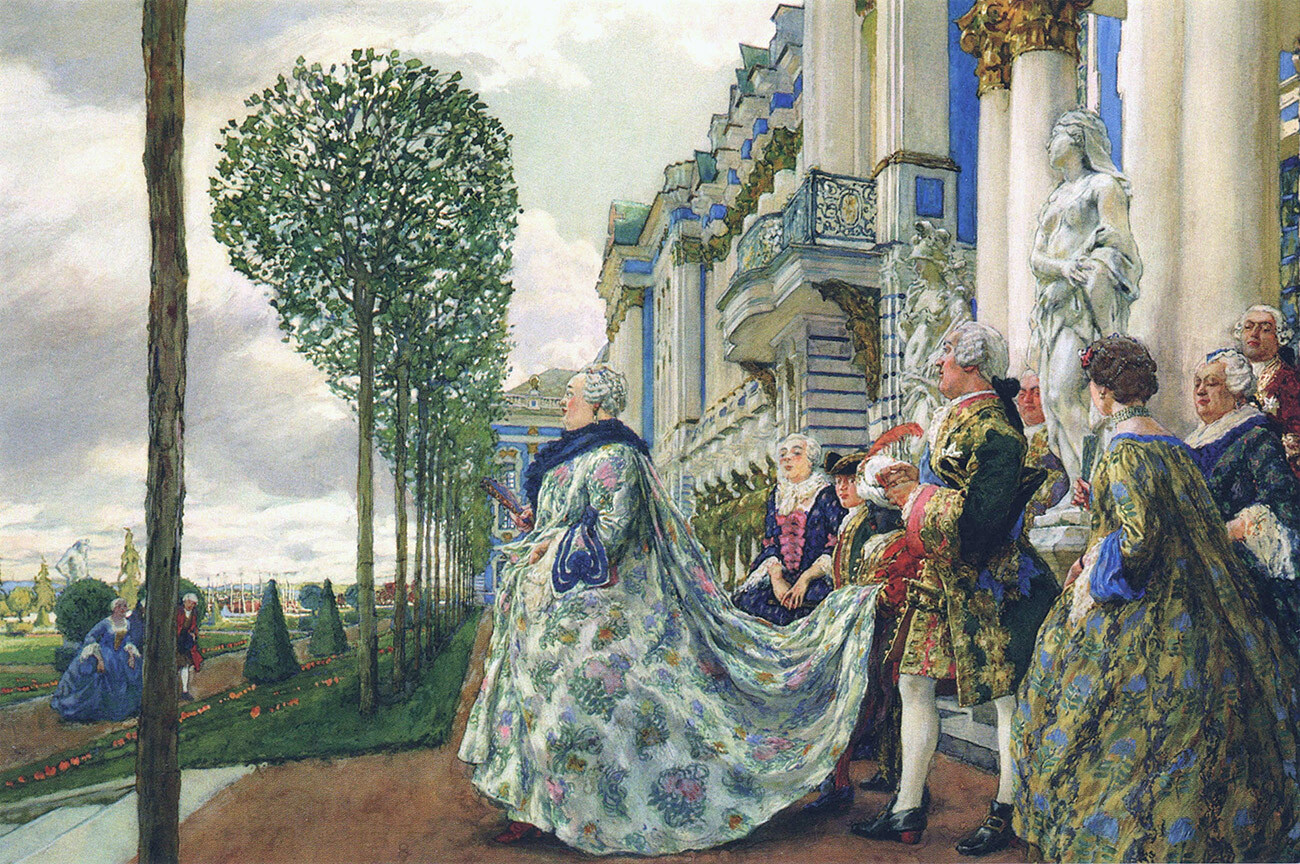 The Italian Bartolomeo Rastrelli was the architect. He also designed several other magnificent baroque buildings, including the Winter Palace and the Grand Palace at Peterhof. 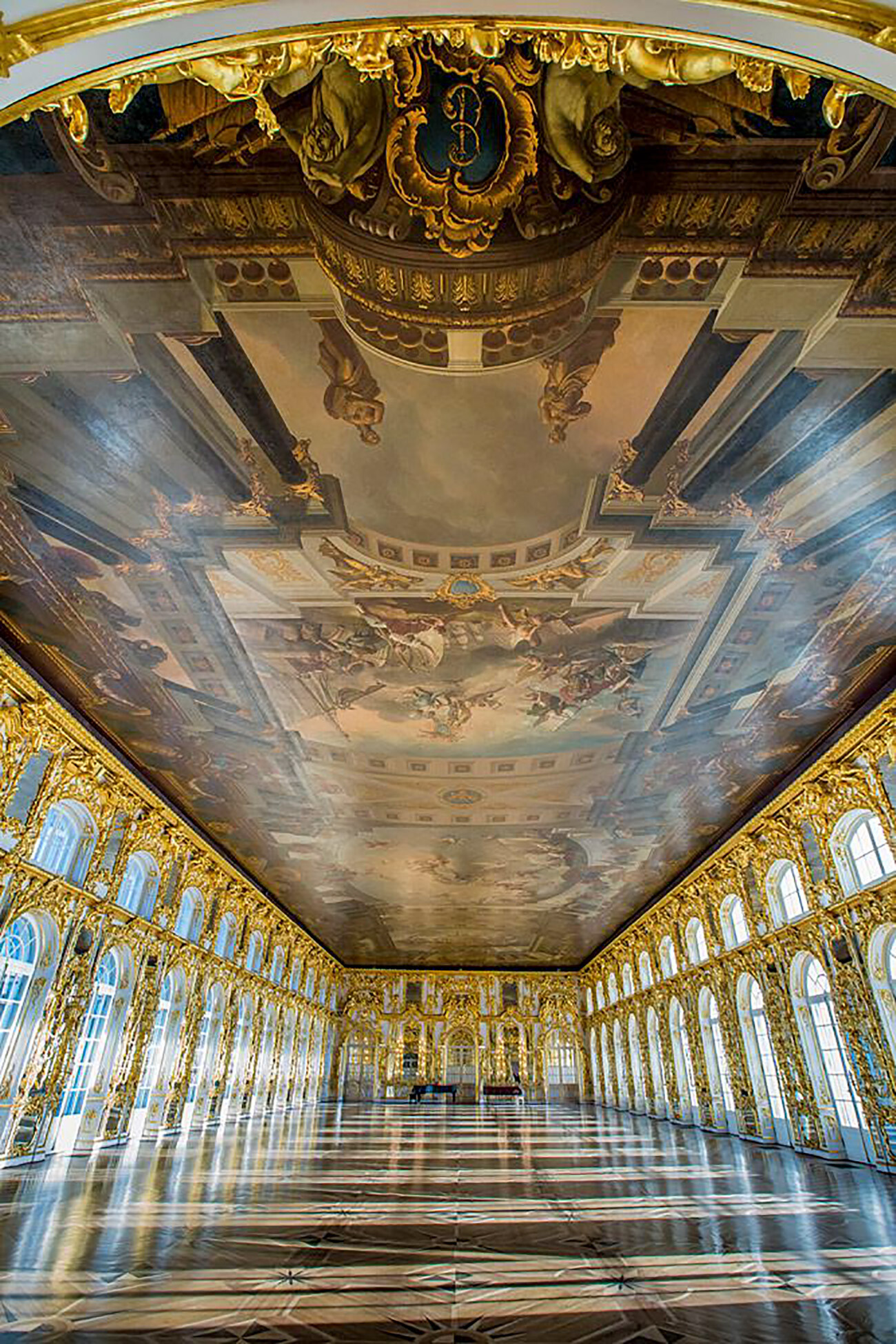 The Big Hall of the Catherine Palace

The palace is equally pompous outside and inside - there’s a Great Hall with mirrors and gilding, and an endless enfilade of sumptuous living rooms, halls and dining rooms. Rastrelli also built a small church adjacent to the palace. 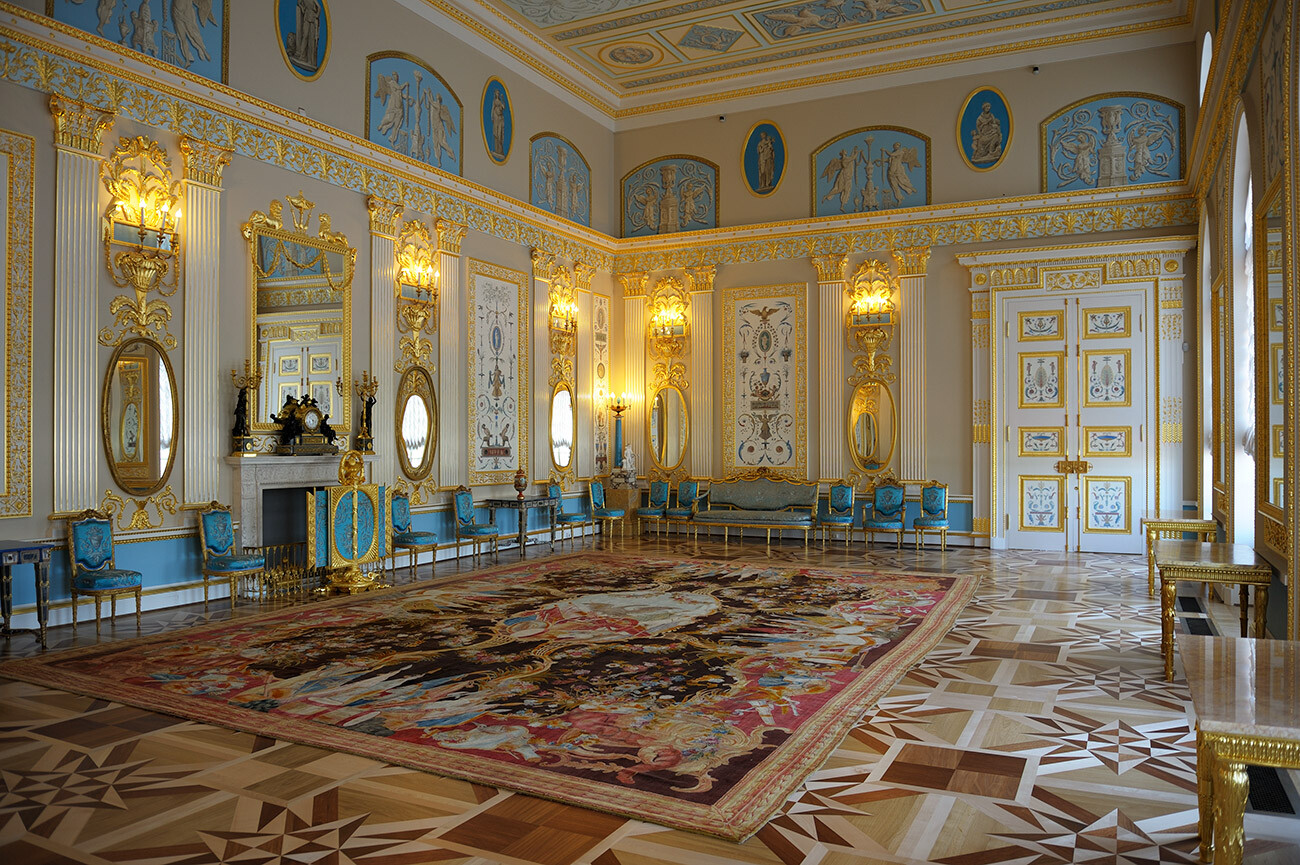 Later, during the reign of Catherine the Great, Sarskoye Selo became known as Tsarskoye Selo, and it became her favorite summer residence, although she considered it a bit old-fashioned and made adjustments to its appearance. At the end of her reign the palace began to be called Catherine's Palace. Previously, the name Big Palace was often used. 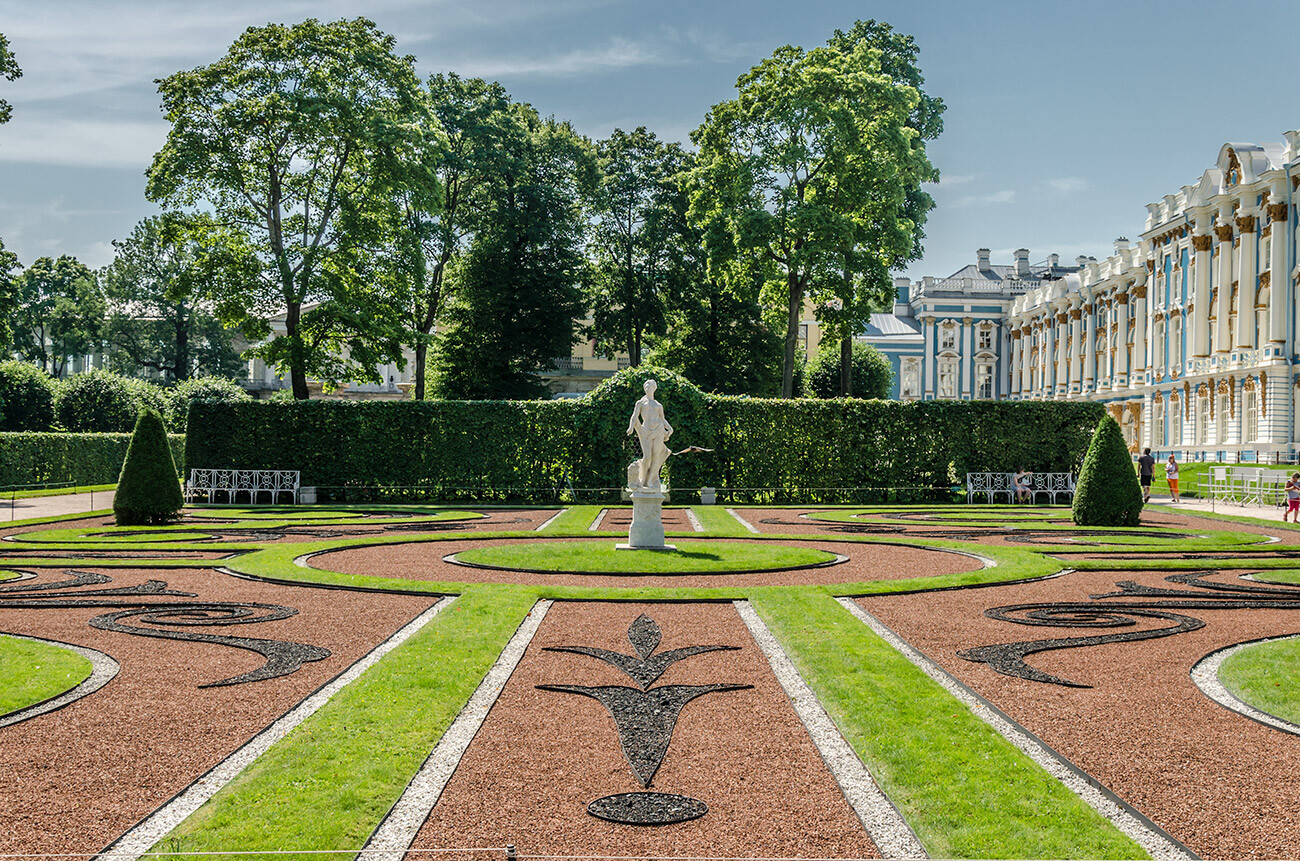 During the reign of Catherine the Great an extraordinarily beautiful palace park was created that spread over an area of 170 hectares, and which still stands today. It has both a French park, and a natural English park. 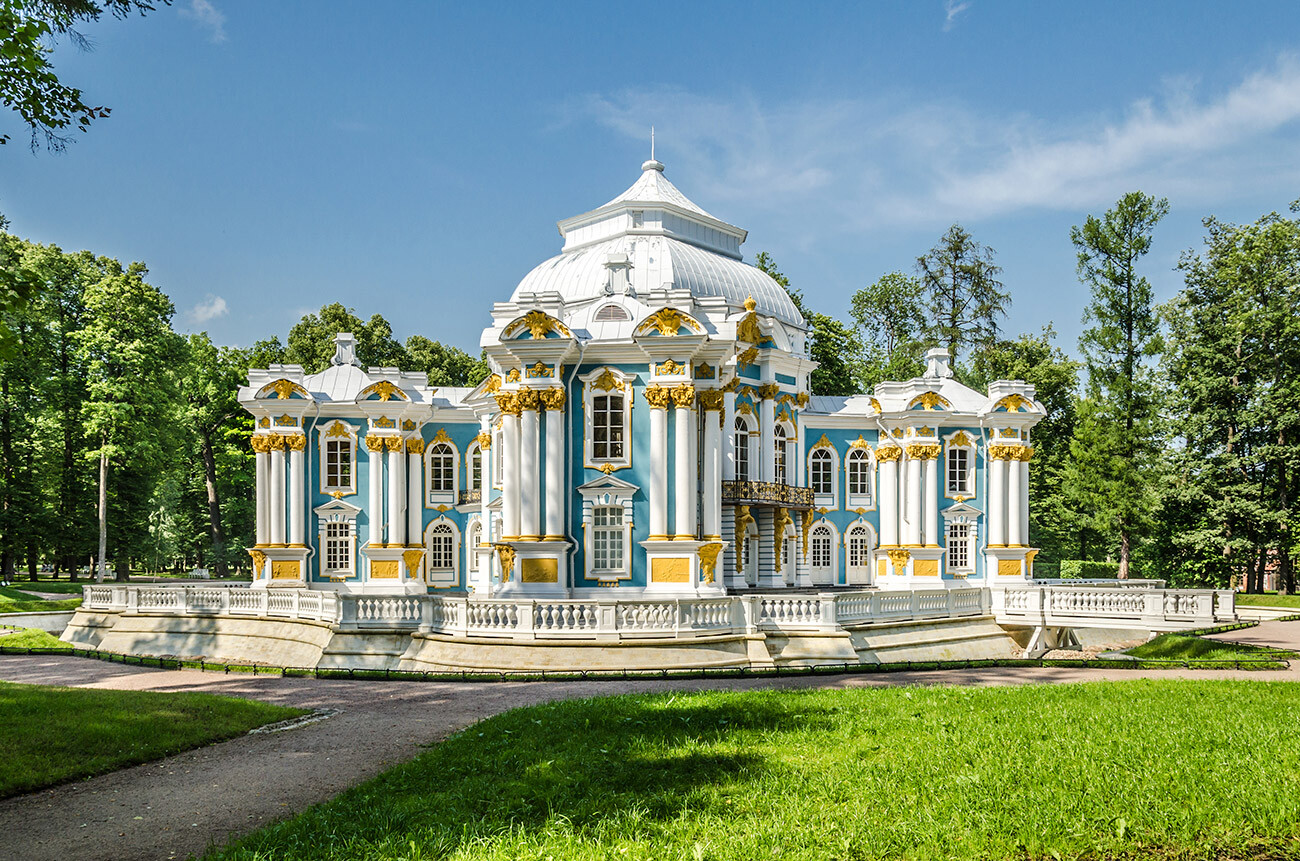 The park has a system of ponds, exquisite sculptures and numerous pavilions, including the Grotto and the Hermitage, both built by Rastrelli. Later, in the 1780s, the Cameron Gallery was also built, named after its architect, the Scotsman Charles Cameron. 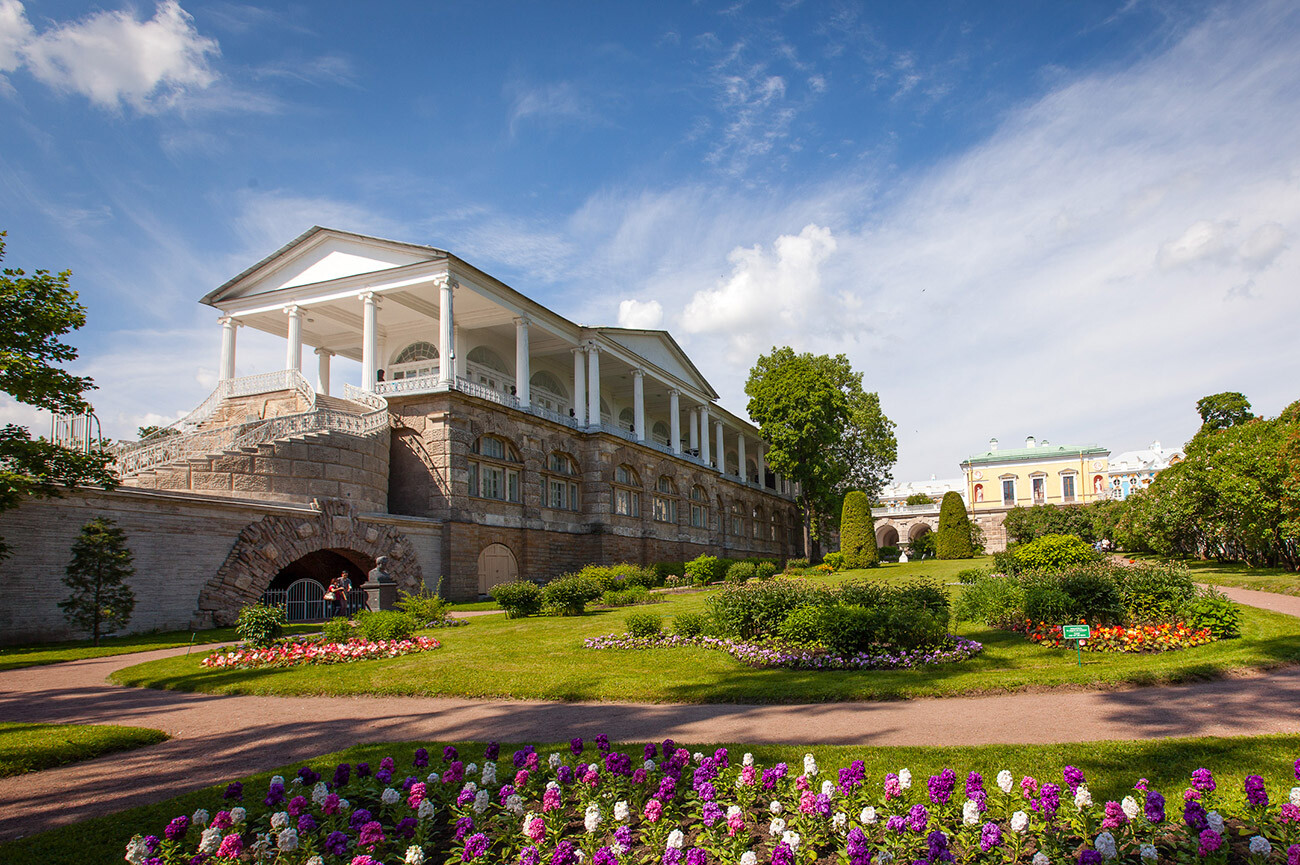 4. There is another palace and park in Tsarskoye Selo 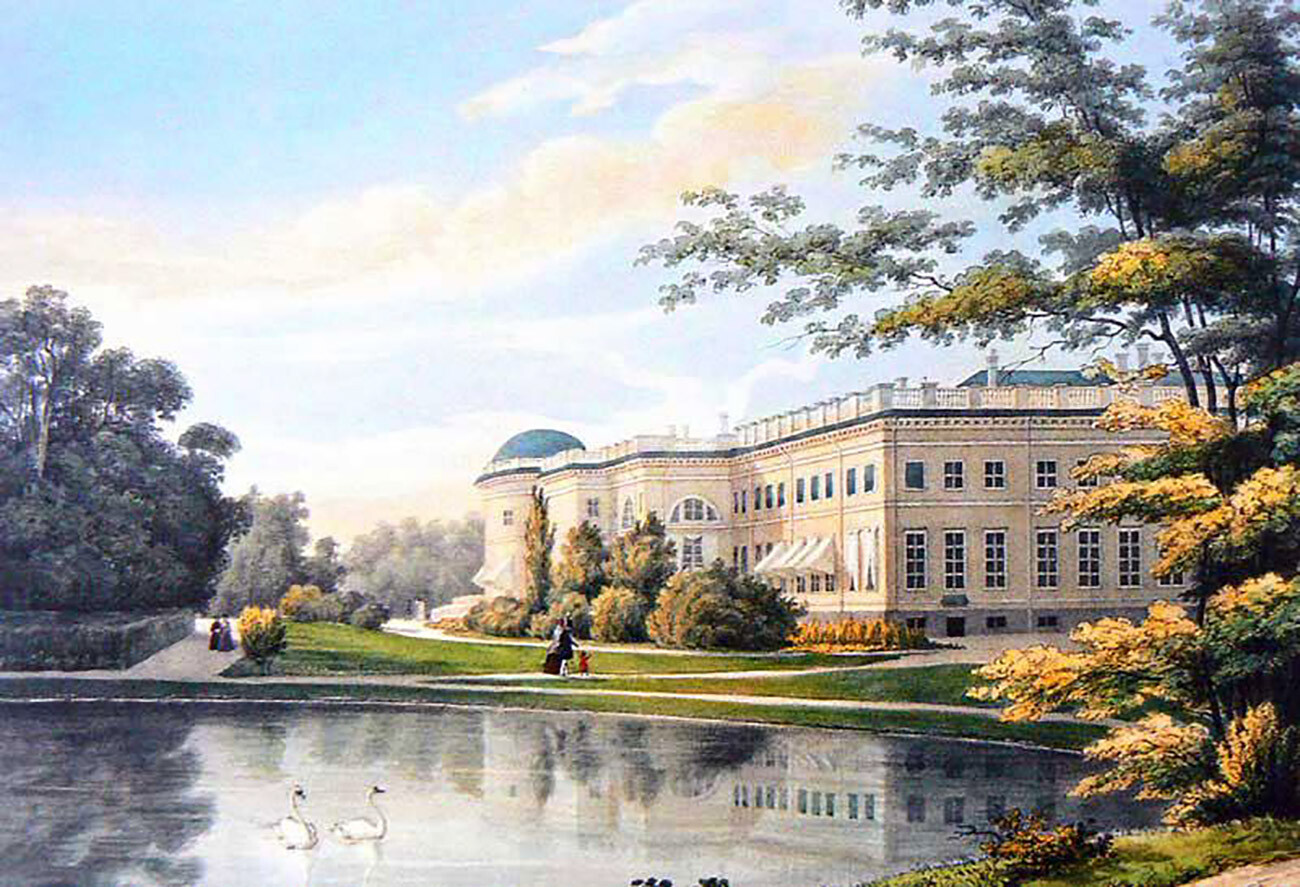 The Garden Facade of the Alexander Palace at Tsarskoye Selo, Engraving, 1840s

Tsarskoye Selo is not only about the Catherine Palace and its park. In the 1790s, by order of Catherine the Great, another Italian, Giacomo Quarenghi, built the Alexander Palace in the Classical style. It was intended for Catherine's favorite grandson, the future Emperor Alexander I. 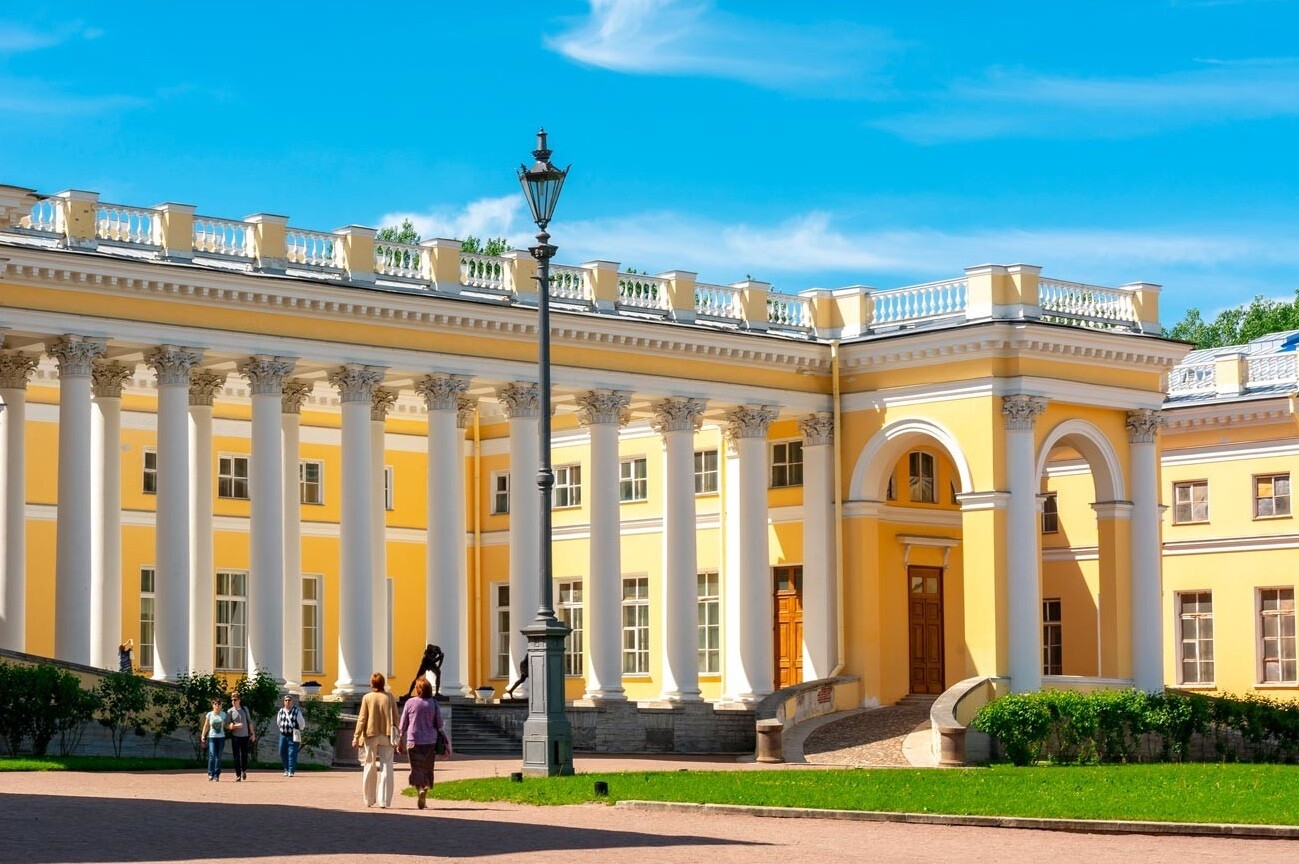 Around the palace stretches a park of the same name, and which occupies another 190 hectares and adjoins the Catherine Park, forming a huge forested area. 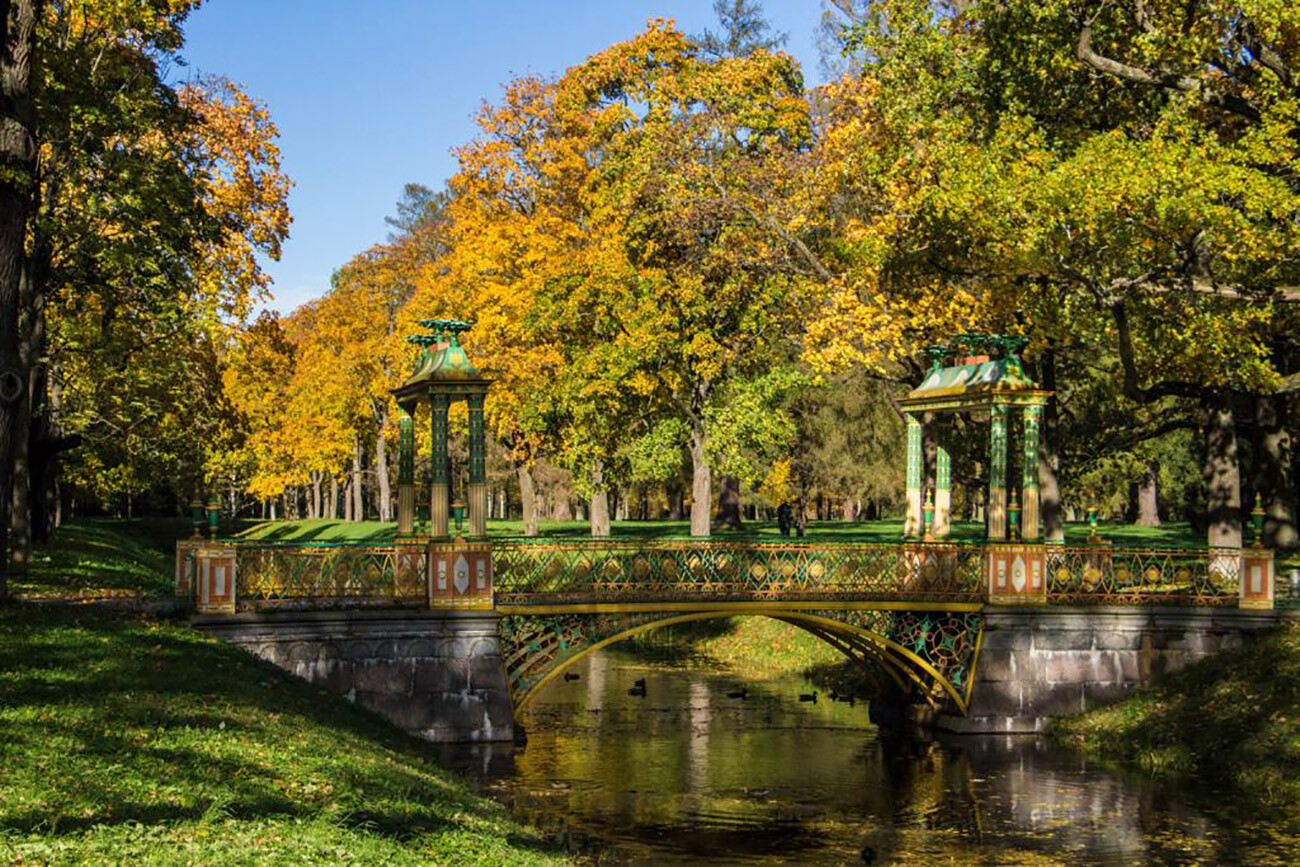 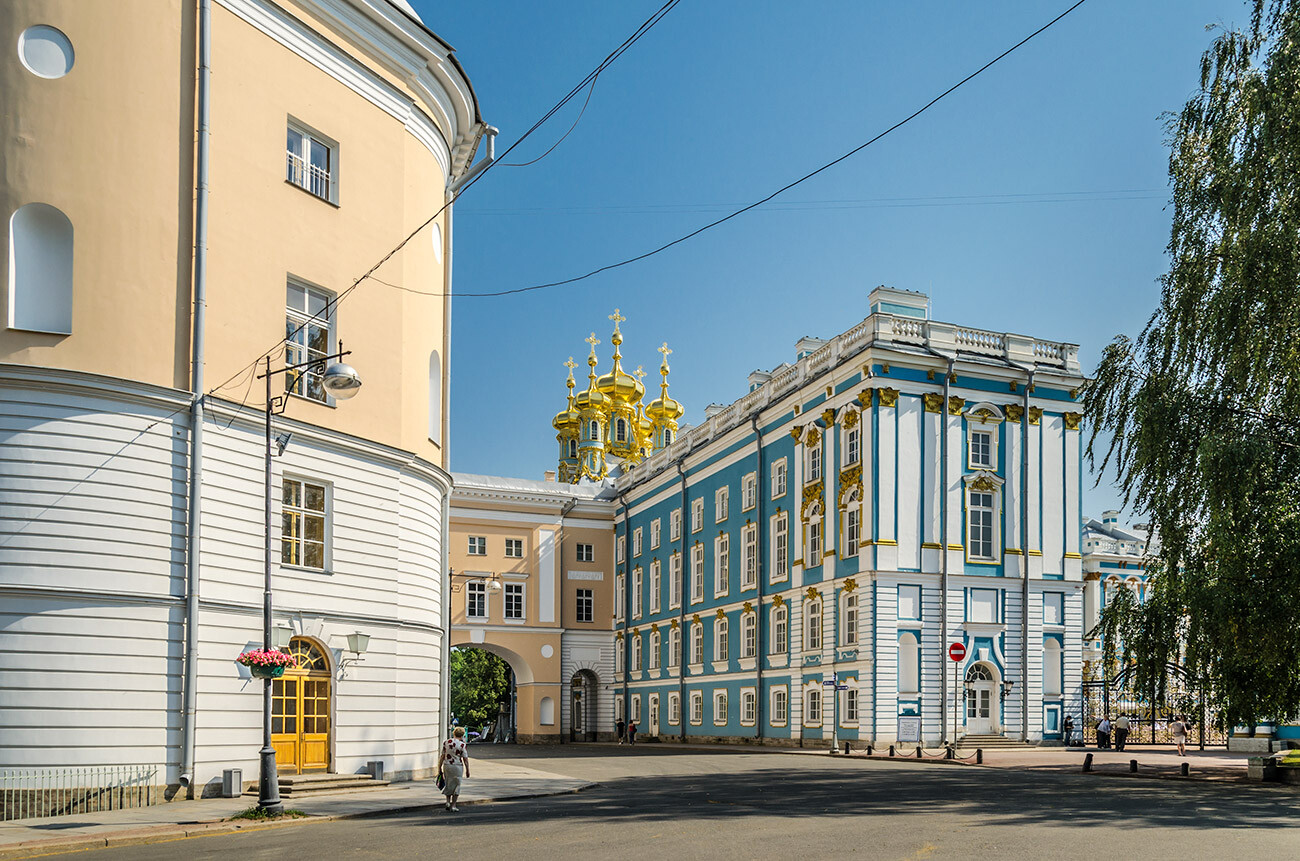 In 1811, the Imperial Lyceum of Tsarskoye Selo was opened in a wing of the Catherine Palace, and it became one of the empire’s most prestigious educational institutions. However, it wasn’t there for long, and in 1843 it moved to St. Petersburg and was renamed as the Alexander Lyceum. Among the school's graduates were several dozen brilliant statesmen, diplomats and military officers. 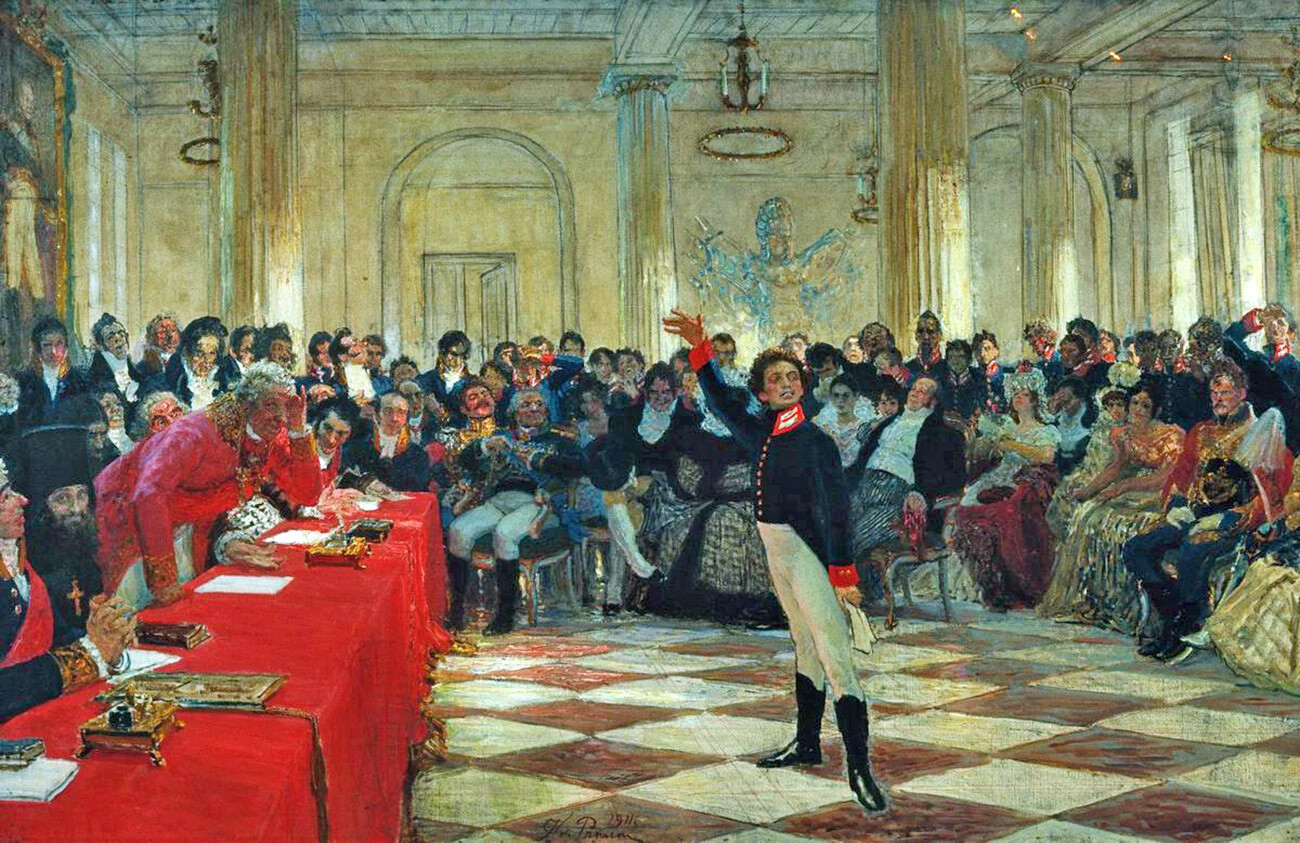 The most famous graduate is the great poet Alexander Pushkin, who praised the Lyceum in his works. Today, there’s a museum recreating student rooms and classrooms.

6. The first railroad in Russia was built here 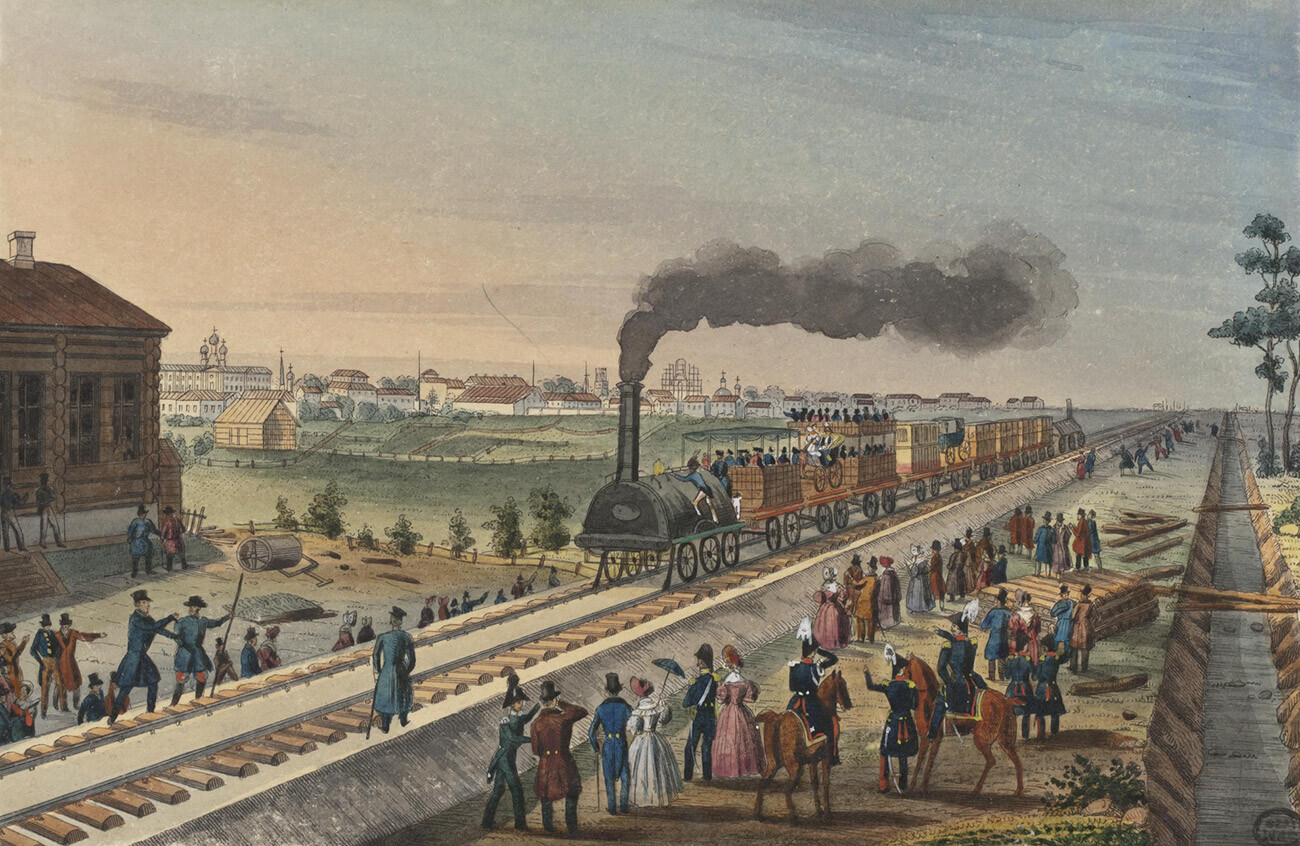 In 1837, the first railway line in Russia was opened to connect St. Petersburg and Tsarskoye Selo. The first passengers were Emperor Nicholas I and his personal guests. This very rudimentary train covered the distance from St. Petersburg to the Tsar’s suburban residence in 35 minutes. The road was open to public use, and the steam locomotives were interchanged with horses pulling the train. The following year the line was extended to the town of Pavlovsk, which had another royal residence and in total ran 27 km in length. 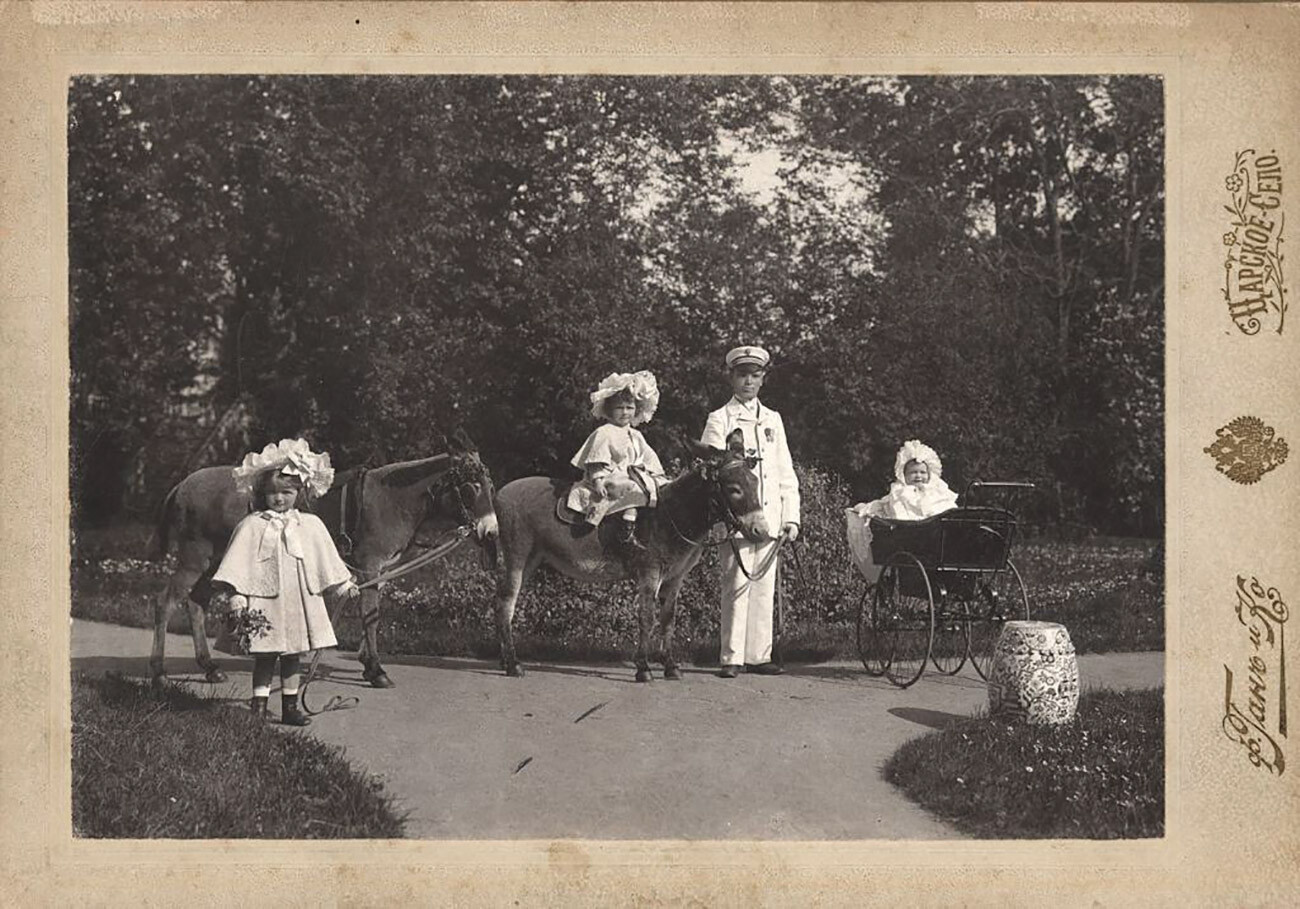 Tsarskoye Selo had always been merely a summer residence for the Romanovs, who otherwise lived in the Winter Palace in St. Petersburg. However, the last Russian emperor, Nicholas II, adored Tsarskoye Selo so much that he moved there with his family. In 1905, they took up residence in the Alexander Palace, making it their primary residence. There were several reasons for his decision, and not least of which was the failed 1905 Russian Revolution. In addition, the Tsar wanted to ‘hide’ his wife, Empress Alexandra, in a safe place because she was not very popular in St. Petersburg high society. 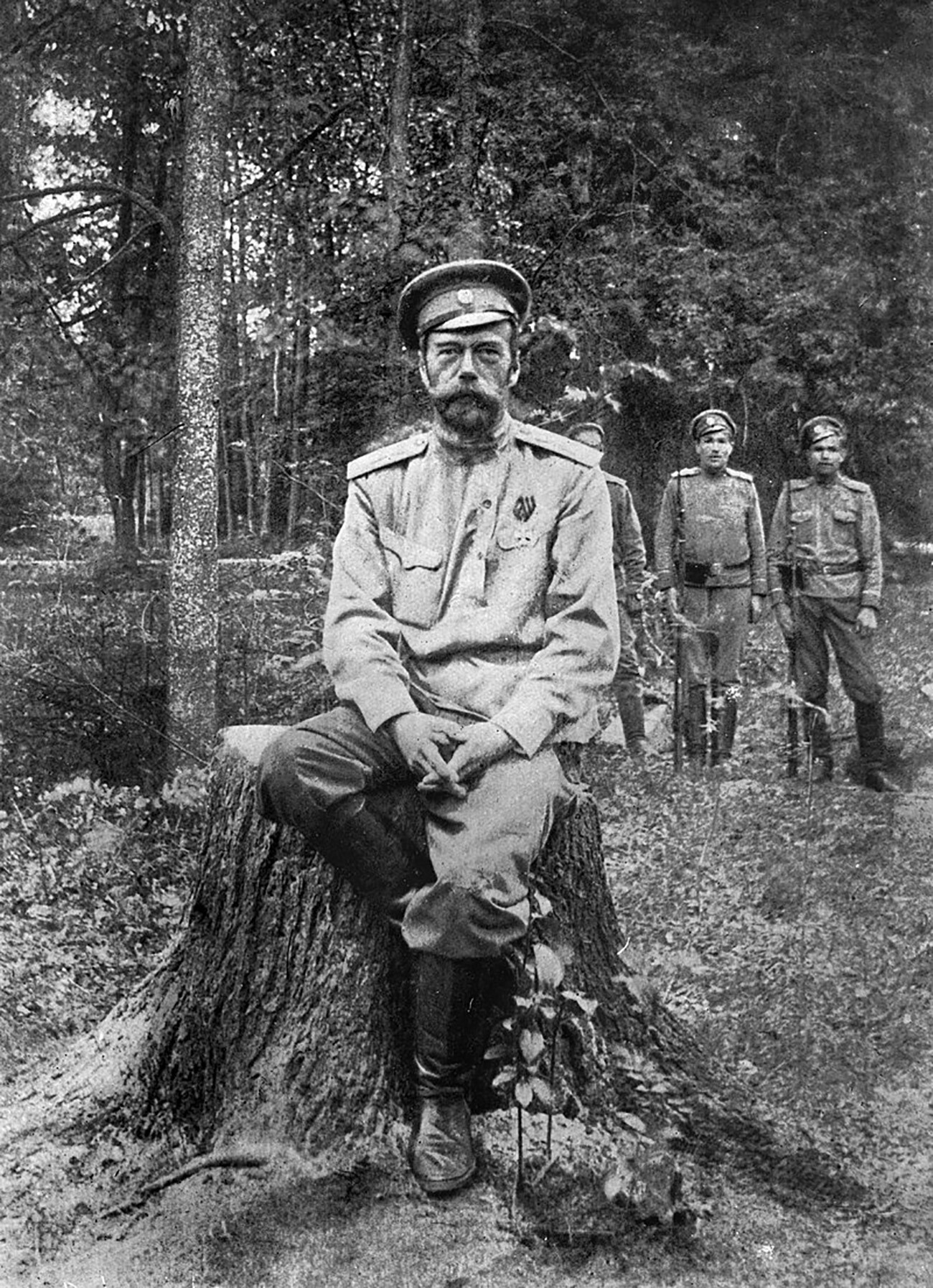 During World War I, a military hospital was set up in the Catherine Palace, where the Empress Alexandra and her daughters worked as nurses. After abdicating the throne, Nicholas and his family were held under arrest at Tsarskoye Selo from February to June 1917. Soon after, the entire family was exiled to Siberia where they were tragically murdered. 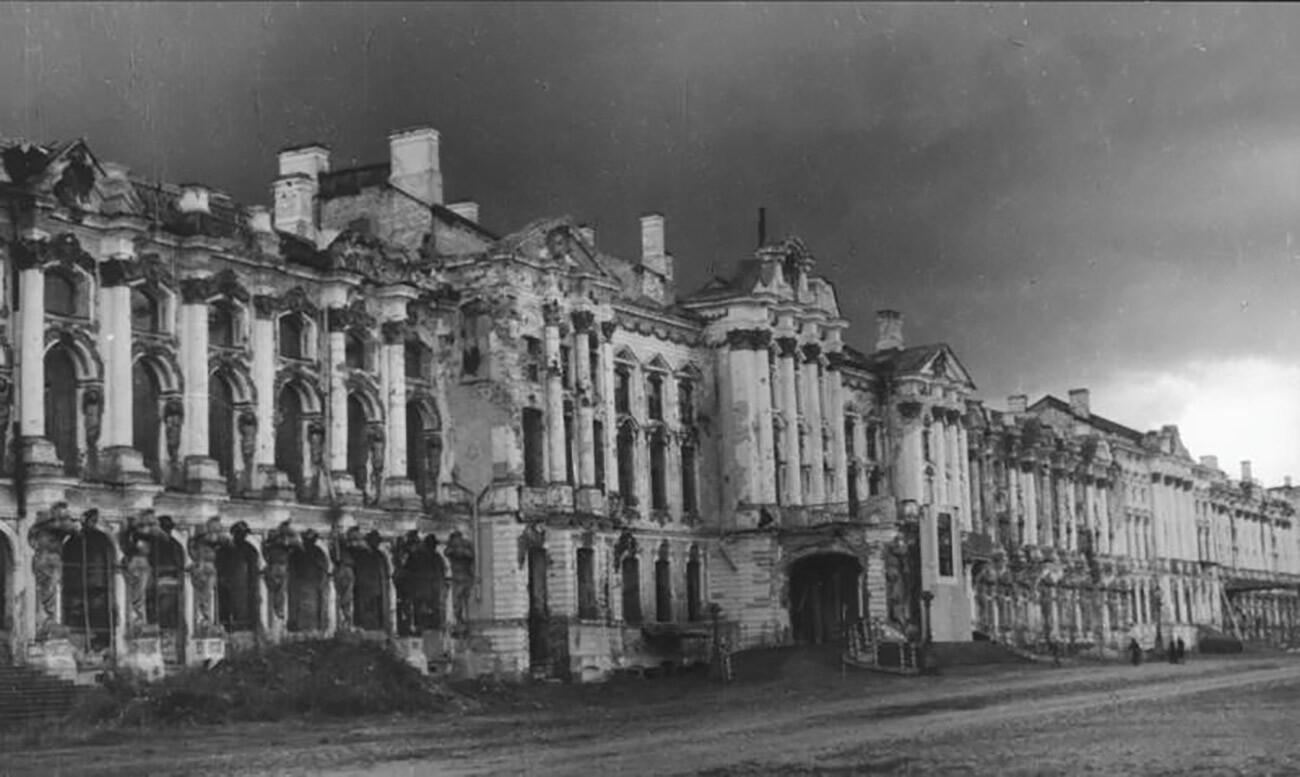 Catherine Palace destroyed by the Nazis

During World War II, Nazi troops occupied Tsarskoye Selo as part of their siege of Leningrad. The Imperial residences were badly damaged, and the halls of the palaces were used as German military headquarters. A make-shift cemetery for Nazi soldiers killed in action was set up in front of the Alexander Palace. 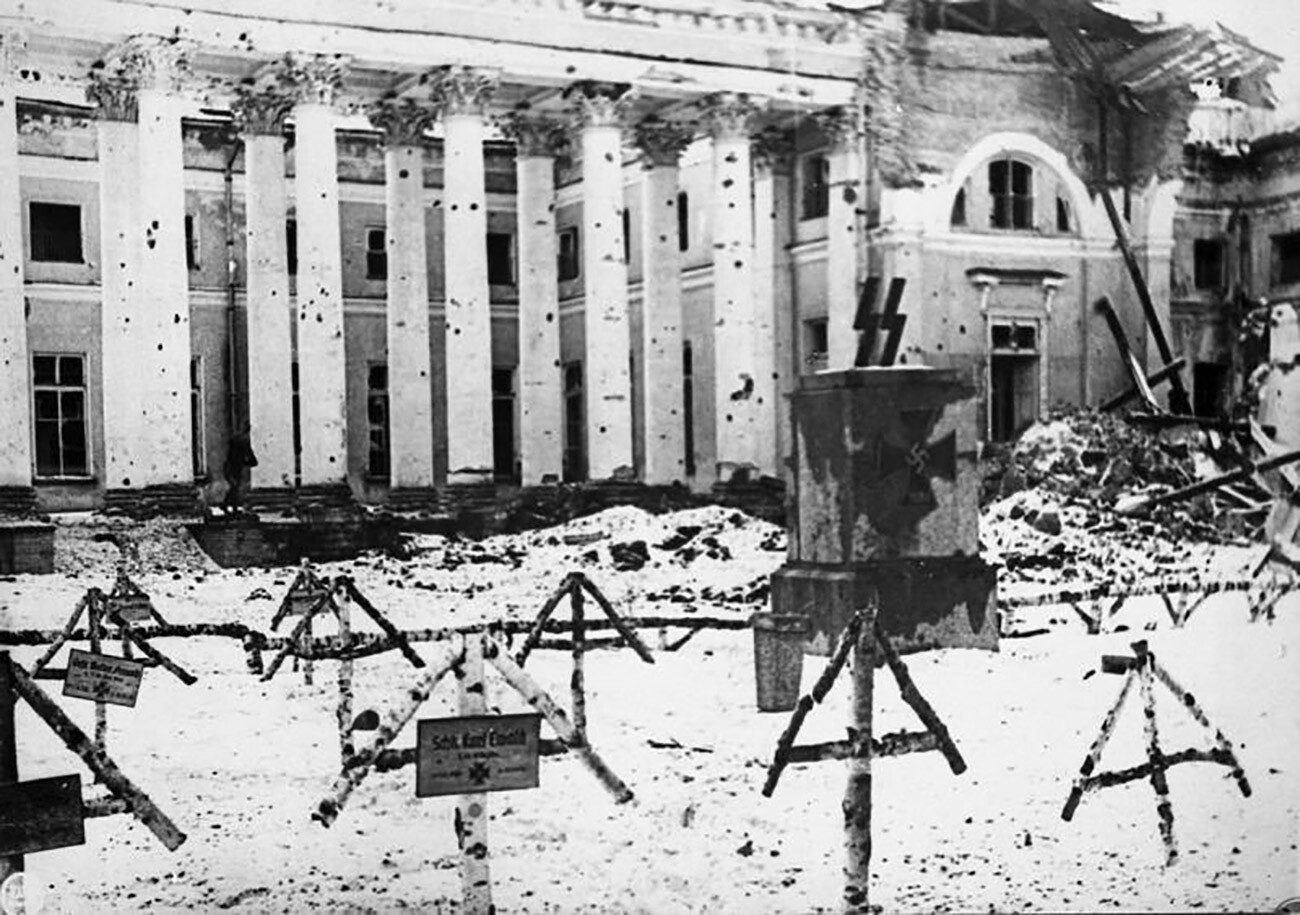 Some of the Imperial art collection and priceless interiors were damaged from shelling or simply looted. Many park sculptures were irretrievably lost, while the park’s trees and other plants burned or perished. 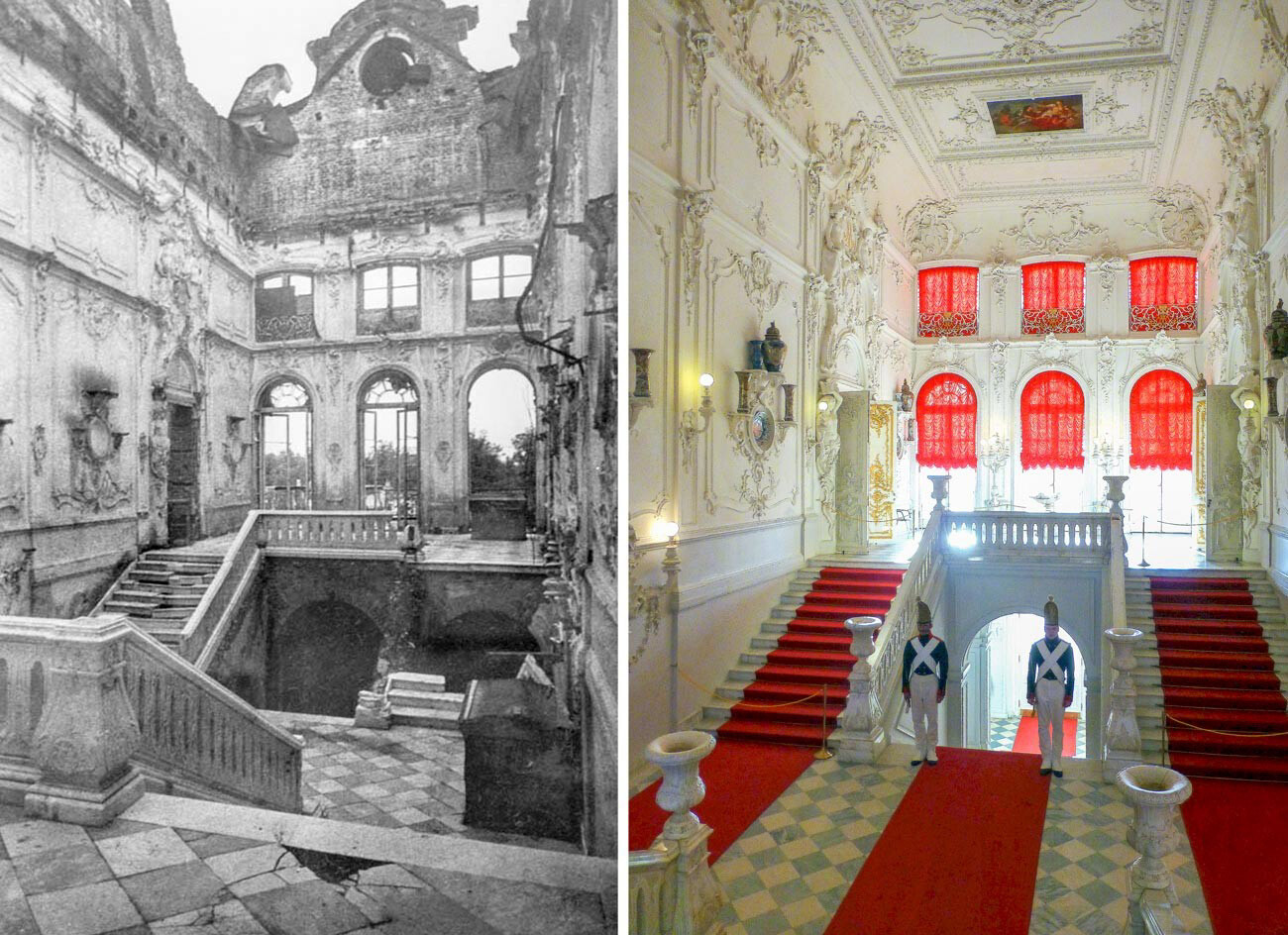 The Main Staircase of the Alexander Palace

In Soviet times, large-scale restoration of the Imperial interiors began. Most of the work is complete, but some rooms of the Alexander Palace are still under restoration.

Take a look at photos of the ruined palace before and after restoration, here.

9. The main treasure - the Amber Room - was lost without a trace

One of the most mysterious stories surrounding Tsarskoye Selo has to do with a famous room in the Catherine Palace that was completely encrusted with amber. The retreating Nazis removed the amber panels from the walls and took them back to Germany. However, while they were retreating, the amber panels were lost on route, without a trace. 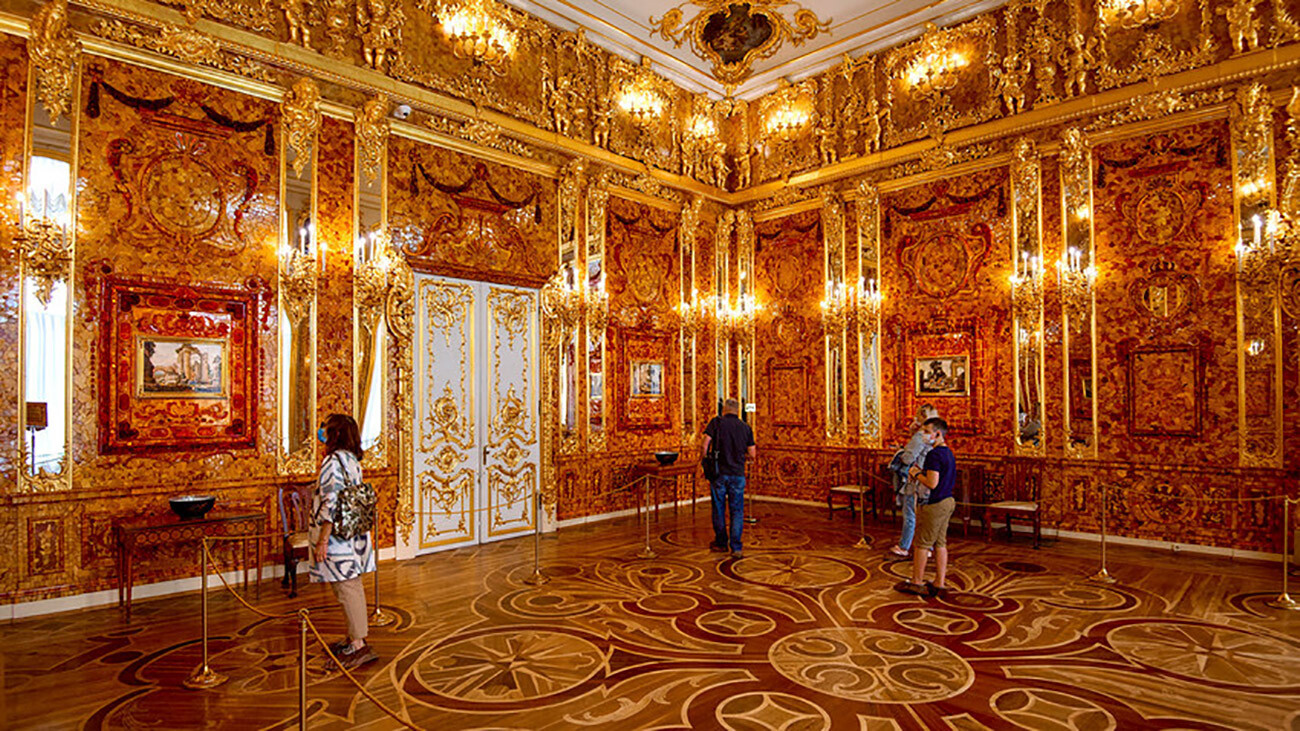 In 2000, a small mosaic was found in Germany, and was promptly handed over to Russia. In the early 2000s, the Amber Room was fully recreated by master craftsmen who based their work on pre-war photos. Still, researchers still hope they’ll find the missing treasure that was looted in 1944.

Read here about the fate of the Amber Room and the various versions that try to explain its disappearance.

10. In Soviet times the city in the vicinity of the palace was named after Pushkin 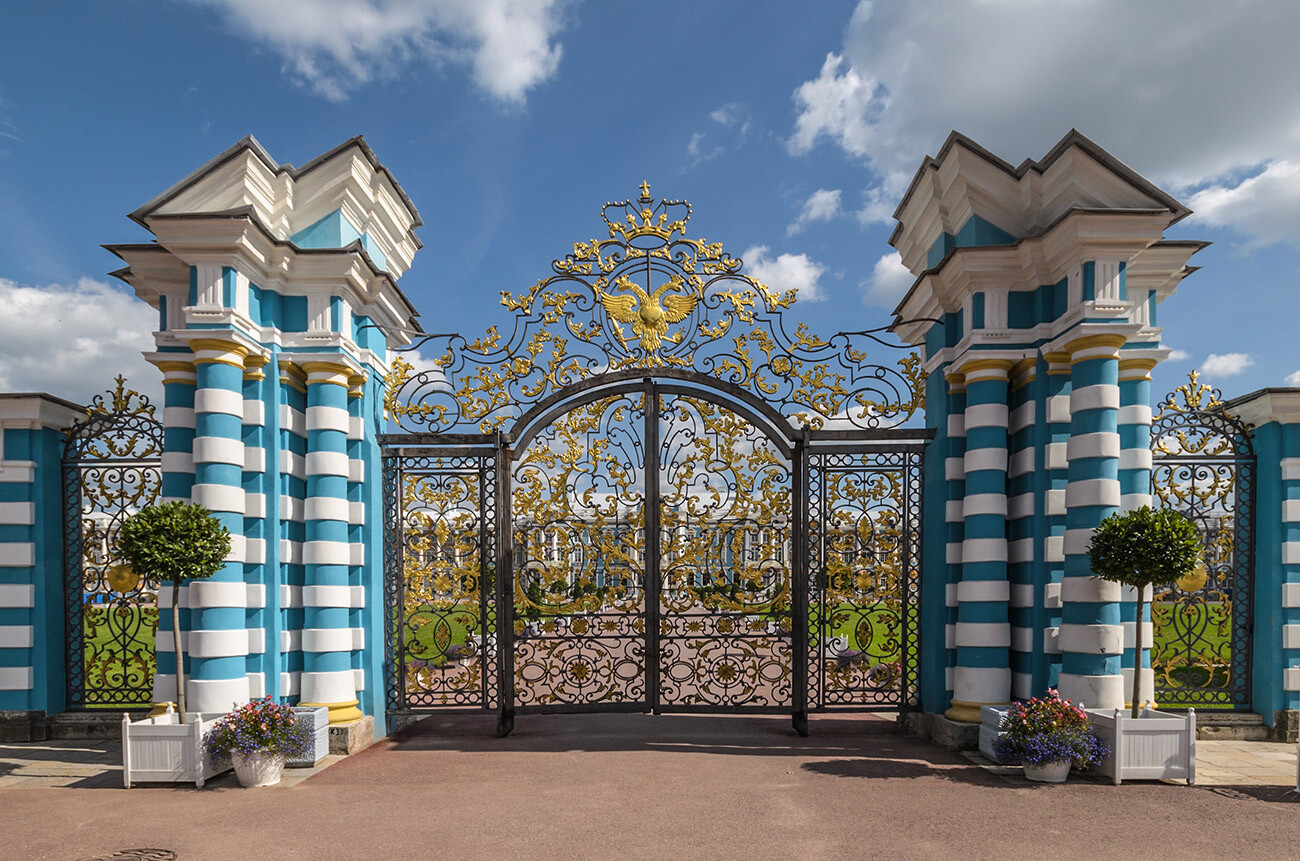 In 1808, Alexander I ordered to build a town around the estate according to an urban plan. Henceforth, not only the palace and park ensemble were called Tsarskoye Selo, but also the town itself, which arose from the surrounding settlements.

Thanks to the residence of the Romanovs in Tsarskoe Selo, the town enjoyed all the most modern amenities, including the railroad. Under Nicholas II, Tsarskoye Selo was equipped with water supply, sewerage, and was also electrified.

After the Bolsheviks seized power in Russia, the Imperial palaces and parks were nationalized, and Tsarskoye Selo was turned into a museum-reserve. In 1937, the USSR commemorated the 100th anniversary of the death of Alexander Pushkin with great pomp, and the city was renamed Pushkin in honor of the great poet and the years he spent studying at the local lyceum.