Architectural fantasy during the reign of Peter the Great

Travel
William Brumfield
Architectural historian and photographer William Brumfield marvels at the fantastic beauty of Ubory’s church masterpiece, which was plagued by delays and legal wrangling. 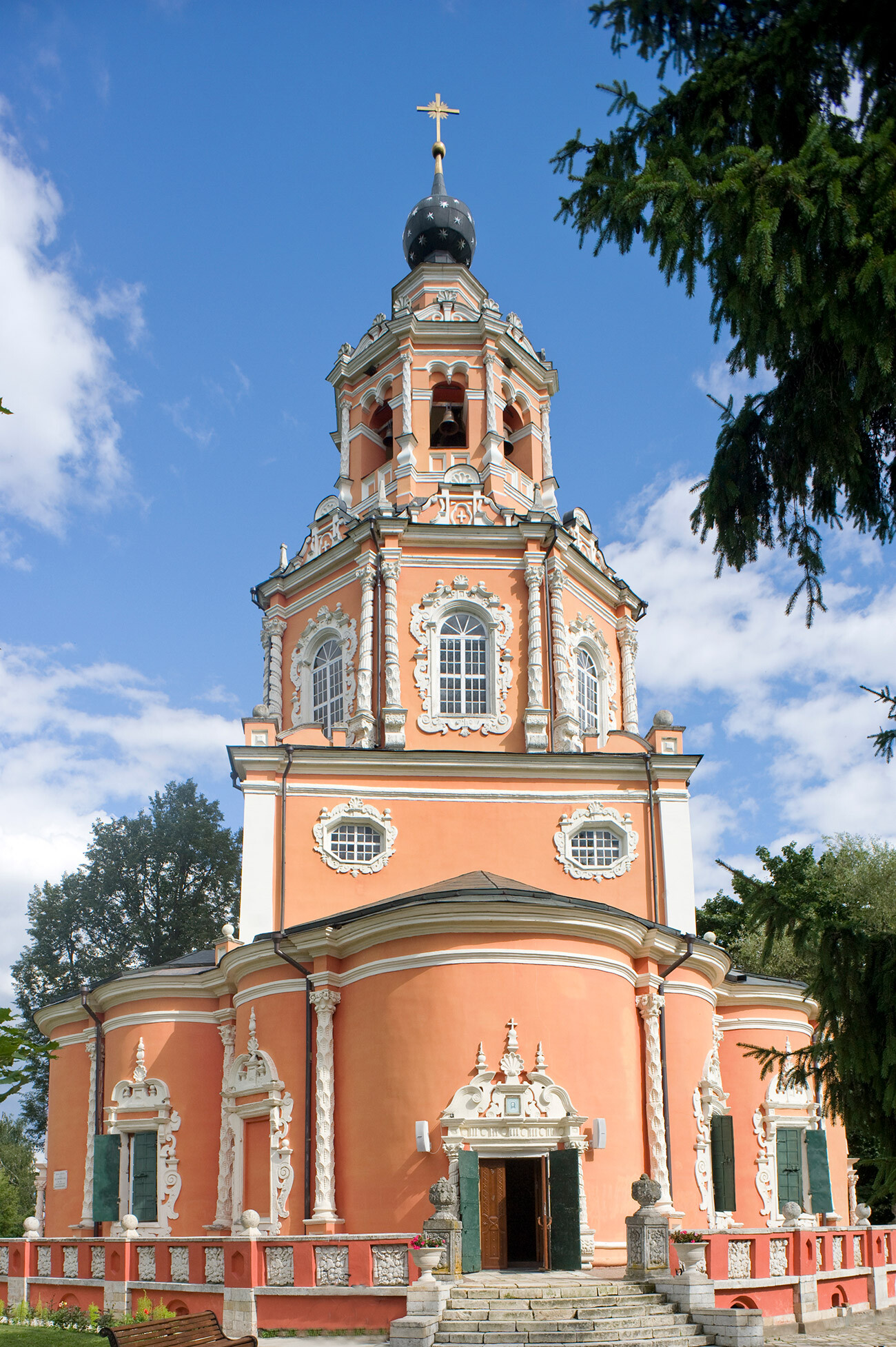 Ubory (near Moscow). Church of the Miraculous Icon of the Savior, west view. August 16, 2013

At the beginning of the 20th century Russian chemist and photographer Sergey Prokudin-Gorsky developed a complex process for vivid color photography. His vision of photography as a form of education and enlightenment was demonstrated with special clarity through his images of architectural monuments in the historic sites throughout the Russian heartland. 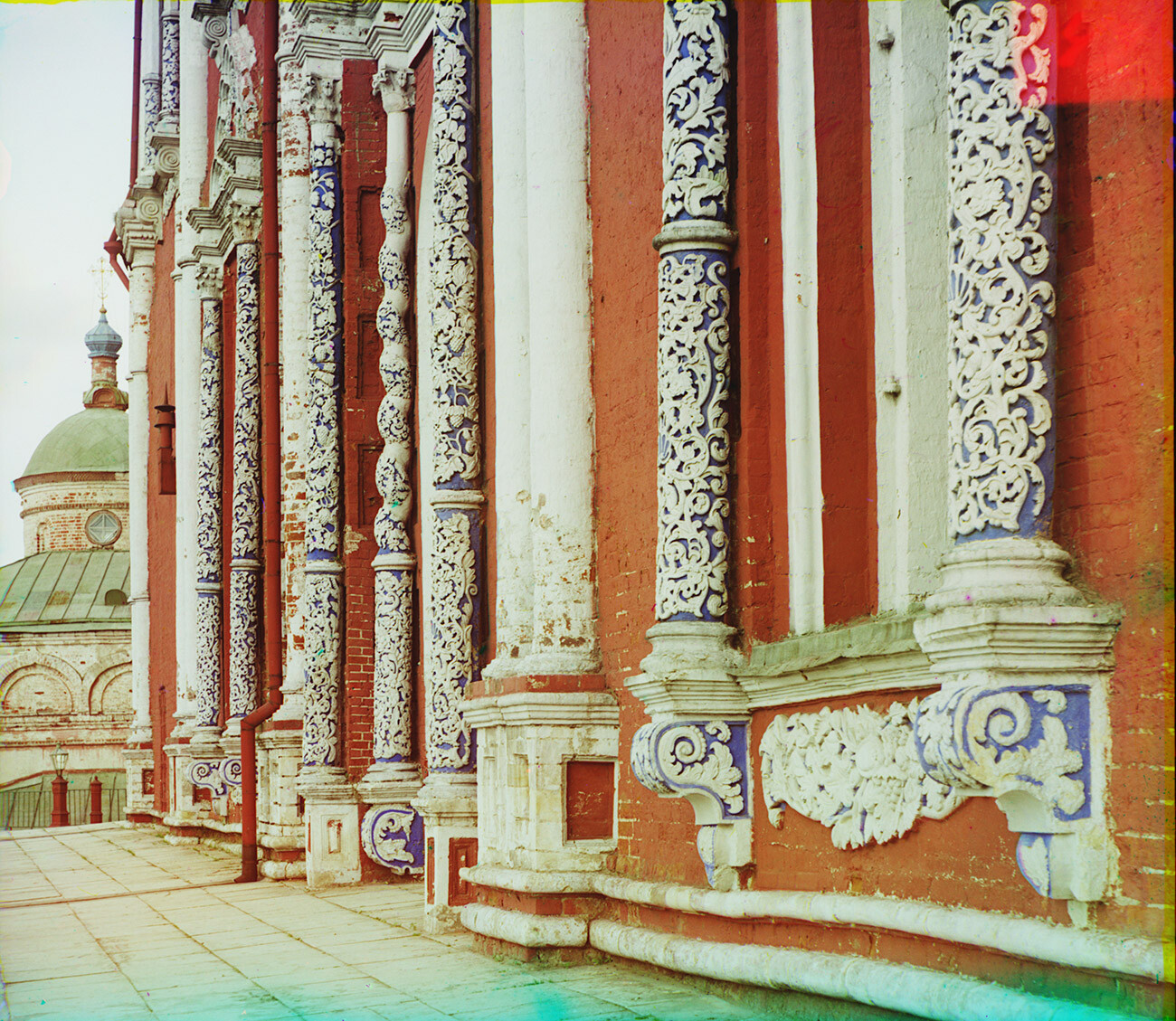 Ryazan Kremlin. Cathedral of the Dormition of the Virgin. North facade with carved limestone columns. Summer 1912

As part of his journeys along the Oka River (a major tributary of the Volga) in the summer of 1910, Prokudin-Gorsky took numerous photographs in Ryazan, a provincial capital located 190 km southeast of Moscow. Ryazan had a complicated and difficult history in the medieval era, but, by the 18th century, its fortunes revived. 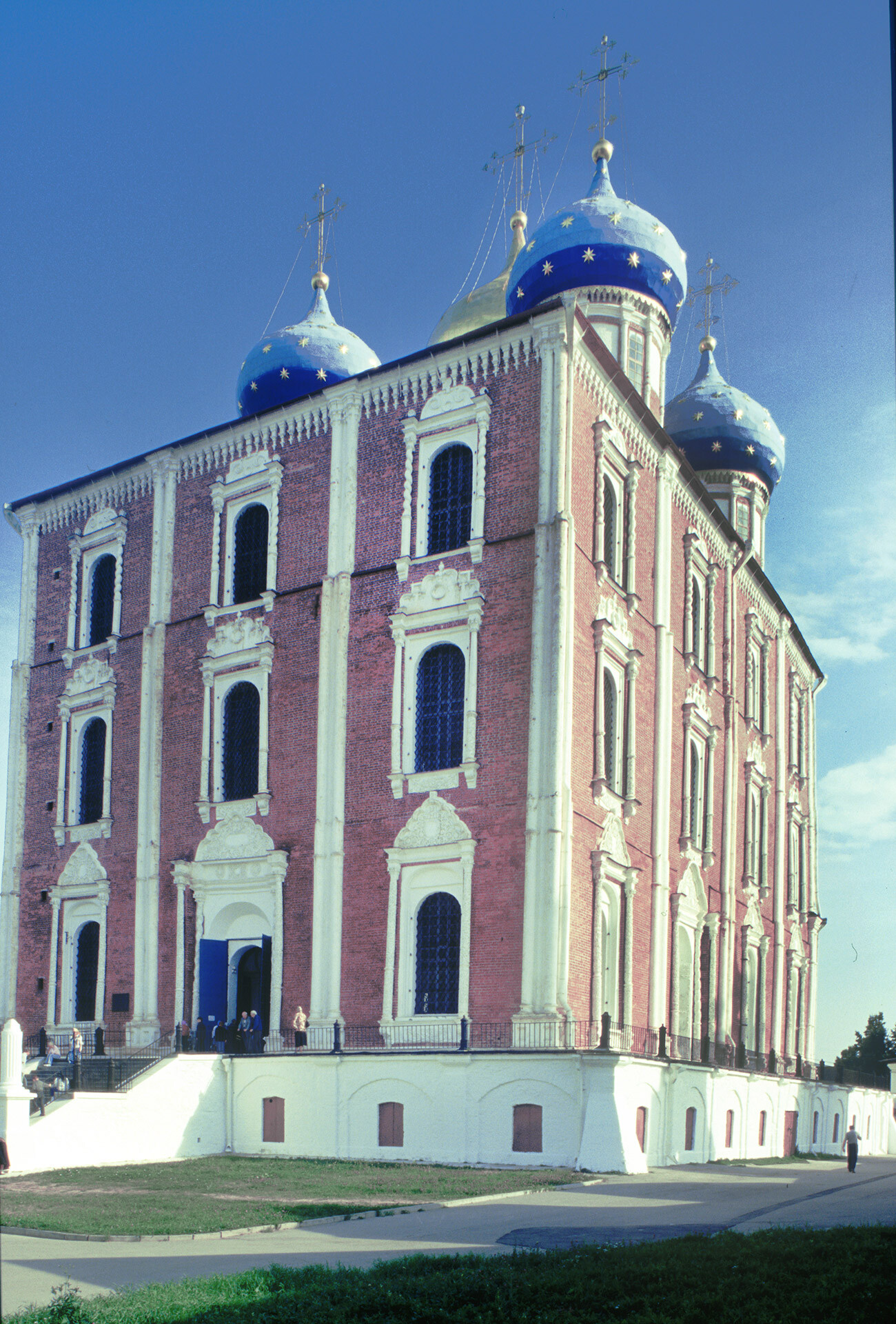 Ryazan Kremlin. Cathedral of the Dormition of the Virgin, southwest view. August 28, 2005

The city’s greatest monument is the Cathedral of the Dormition of the Virgin, rebuilt on a large scale at the end of the 17th century. After initial construction failures and collapse in 1692, the project was entrusted by Metropolitan Avramy to the architect Yakov Bukhvostov, who faced daunting challenges with the foundations and the roof vaults for the immense structure.

With the assistance of experienced local builders, the structure was completed in 1699 and another three years were spent on its interior. In August 1702, the cathedral was consecrated by Metropolitan Stefan Yavorsky, who became a leading prelate of the Russian Church during Peter the Great’s reign. 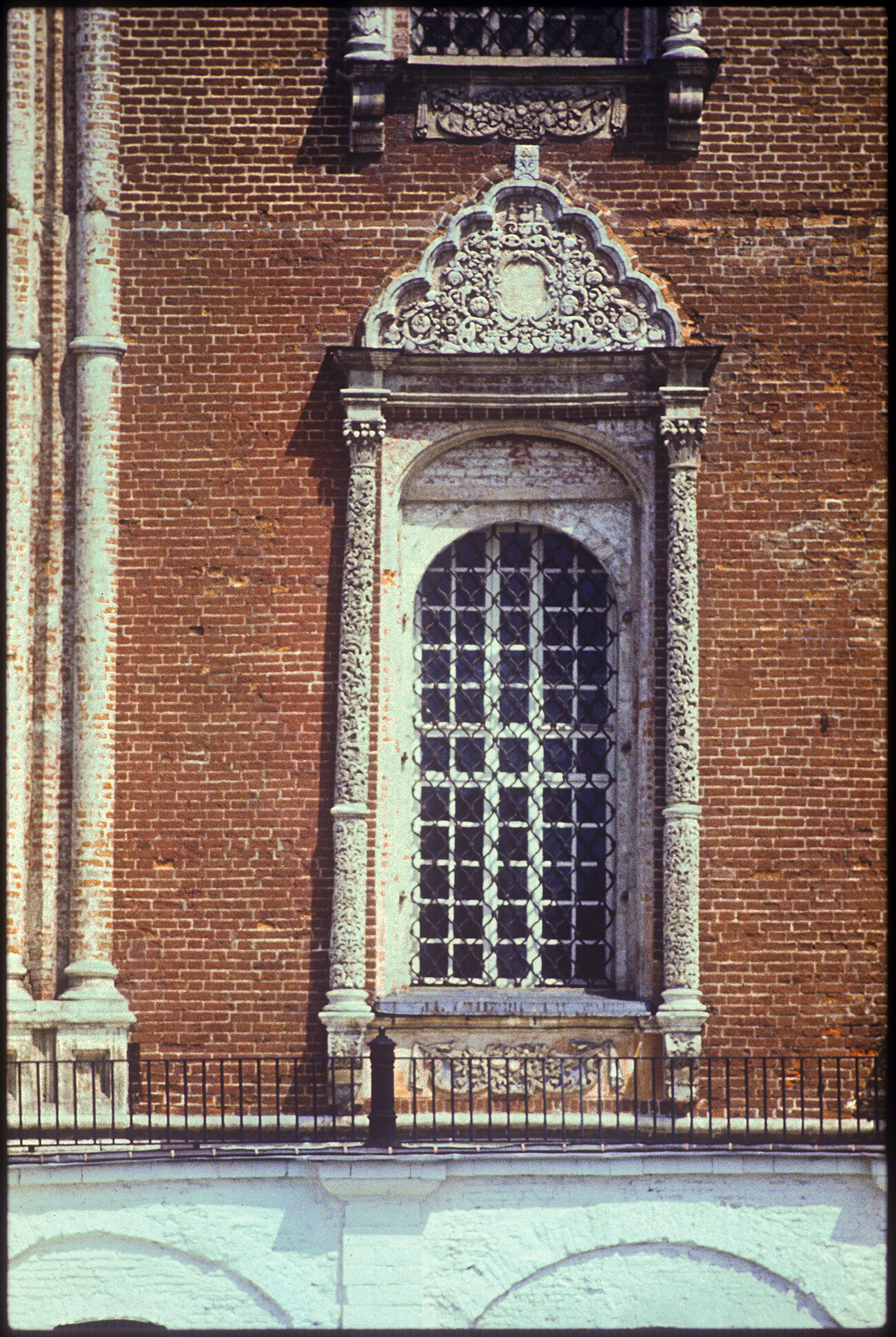 Ryazan Kremlin. Cathedral of the Dormition of the Virgin. West facade, window with carved limestone decoration. May 13, 1984

Prokudin-Gorsky’s photographs of the Dormition Cathedral show a decorative mannerism at the beginning of fundamental changes in Russian architectural design initiated during the reign of Peter. Bukhvostov’s work played an important role in this evolution, especially in his design of wealthy estate churches in the area around Moscow. 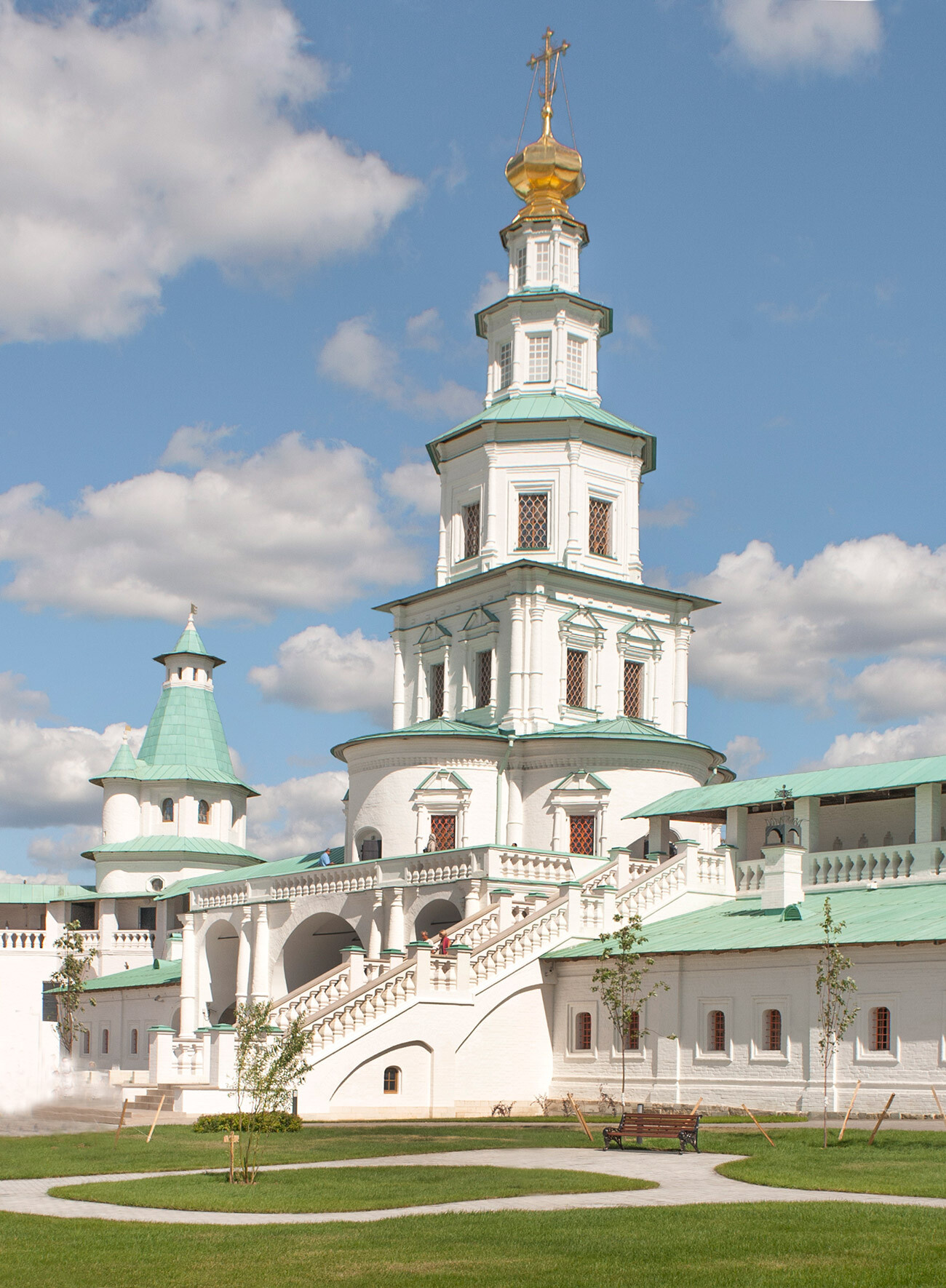 Iakov Bukhvostov is one of a very few early Russian architects whose name was recorded (most worked anonymously). He was born around 1650 to a serf family on an estate belonging to the prominent boyar Mikhail Tatishchev near the Moscow regional town of Dmitrov. Although the details are unknown, Tatishchev seems to have noted his talent as a builder, which allowed him to resettle as a contract worker in Moscow, where his name first appears in 1681 as a bidder for two construction projects.

His name reappears in 1690, in connection with major improvements to the walls of the Resurrection New Jerusalem Monastery, situated to the west of Moscow and one of the most important monastic institutions in Russia at that time. Included in Bukhvostov’s work there was a gate Church of the Entry into Jerusalem over the Holy Gate, completed in 1694 and largely destroyed during the Battle of Moscow in the Fall of 1941. 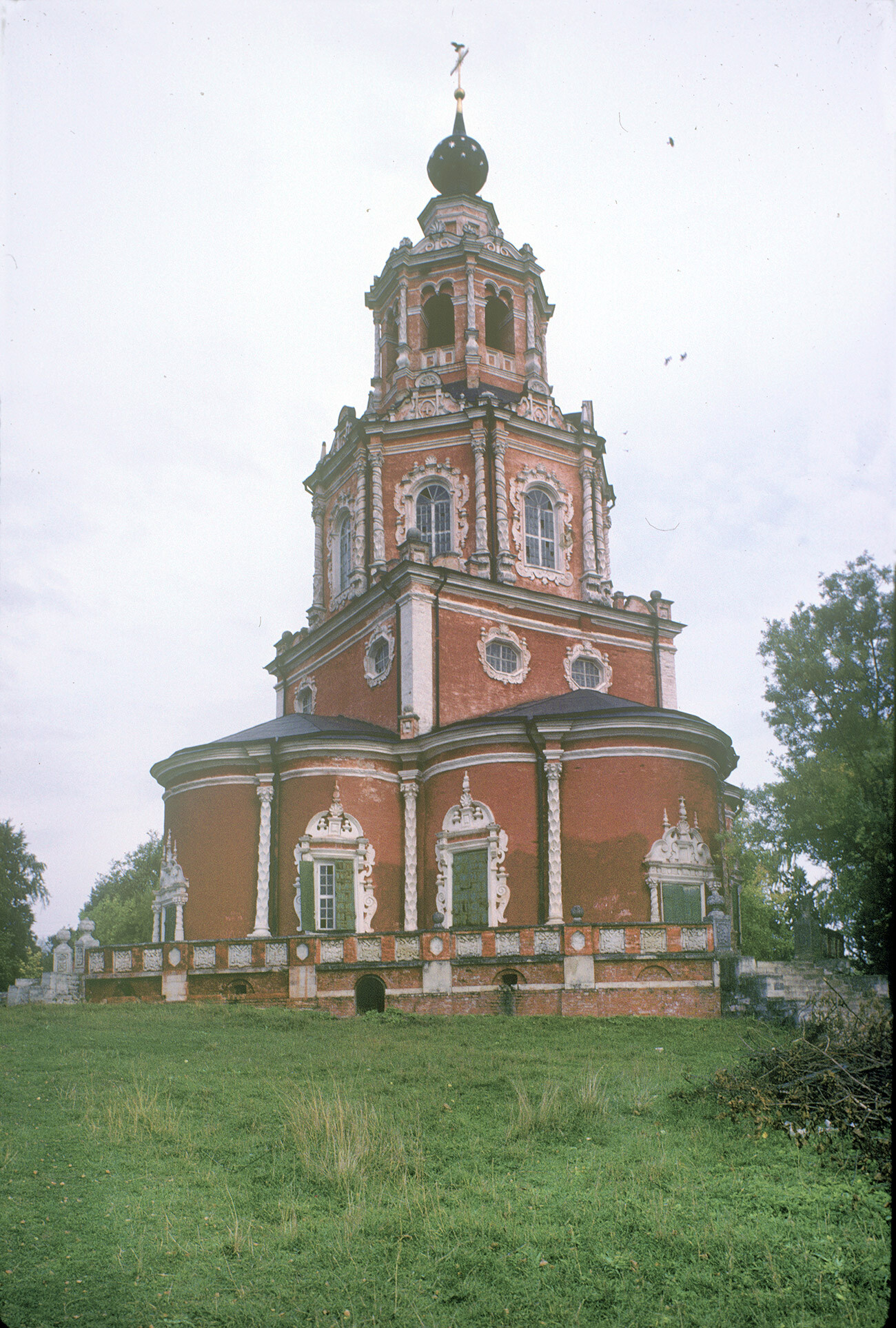 Ubory. Church of the Miraculous Icon of the Savior, southwest view. September 28, 1992

Now restored to an approximation of its original form, the bold design of the New Jerusalem gate church consisted of four octagonal tiers ascending from a square structure that rises above four lobes over the main gateway. This concept of a tower of ascending octagonal tiers - also evident in traditional Russian wooden architecture - proved to be central for Bukhvostov’s creativity. 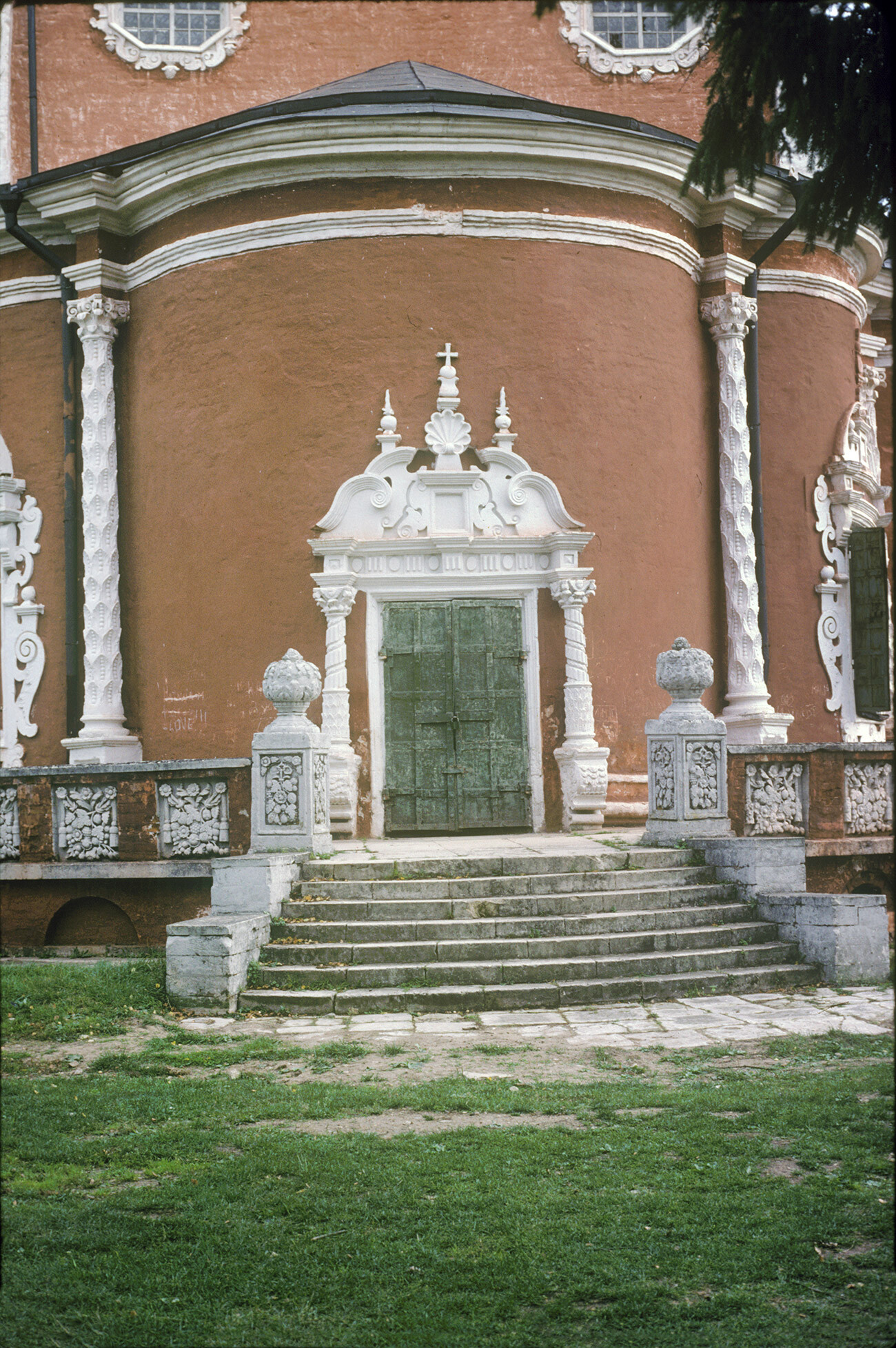 Concurrently with his work at Ryazan, Bukhvostov entered a contract for another project, which was smaller, yet structurally more intricate than the Ryazan Dormition Cathedral. The Church of the Miraculous Image of the Savior (‘Spas Nerukotvorny’) at Ubory was commissioned in 1694 by the choleric Peter Vasilevich Sheremetev ‘The Younger’ (1650-97), who occupied a high position at the court of Tsar Alexey Mikhailovich. 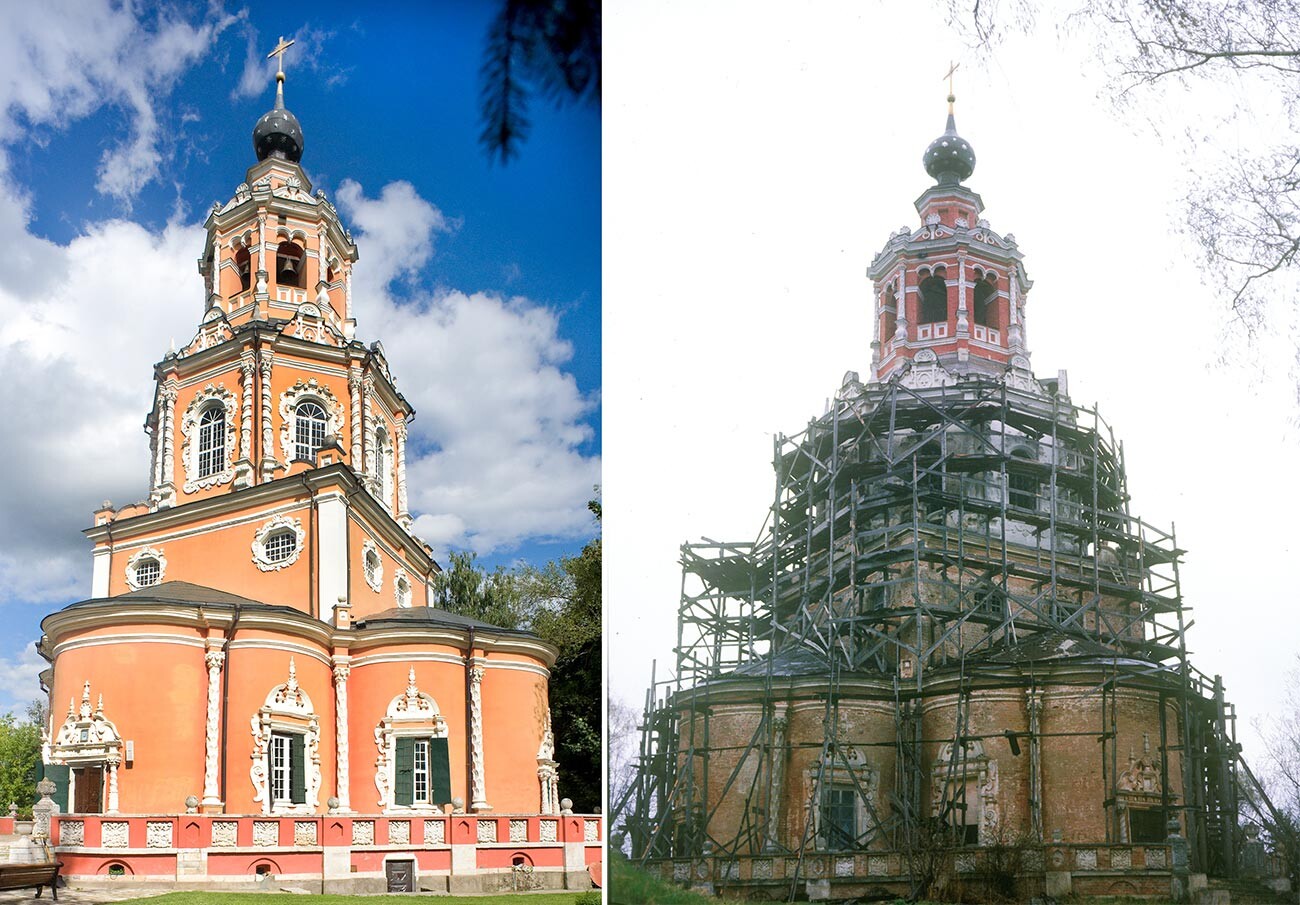 Intended as the crowning architectural jewel for Sheremetev’s Ubory estate near the Moscow River between New Jerusalem and Moscow, the church was originally to be completed by the end of 1694. However, the tempo of construction was hampered by insistent demands by the elderly Metropolitan Avramy to complete the much larger cathedral project in Ryazan, some 200 kilometers away.

Additional complications included the lack of clarity about the scheduled delivery of building materials to Ubory, which occurred in September. When he saw no work with the bricks and limestone, the Sheremetev launched a suit against Bukhvostov, who had received the count’s money under contract.

Historians should be grateful for Sheremetev’s anger, for the ensuing court documents provide rare and fascinating details about the construction business at that time. Bukhvostov, however, was under serious legal threat - particularly in view of his serf status - from both the metropolitan of Ryazan and Sheremetev, so he fled from the bailiffs sent to arrest him in Ryazan. 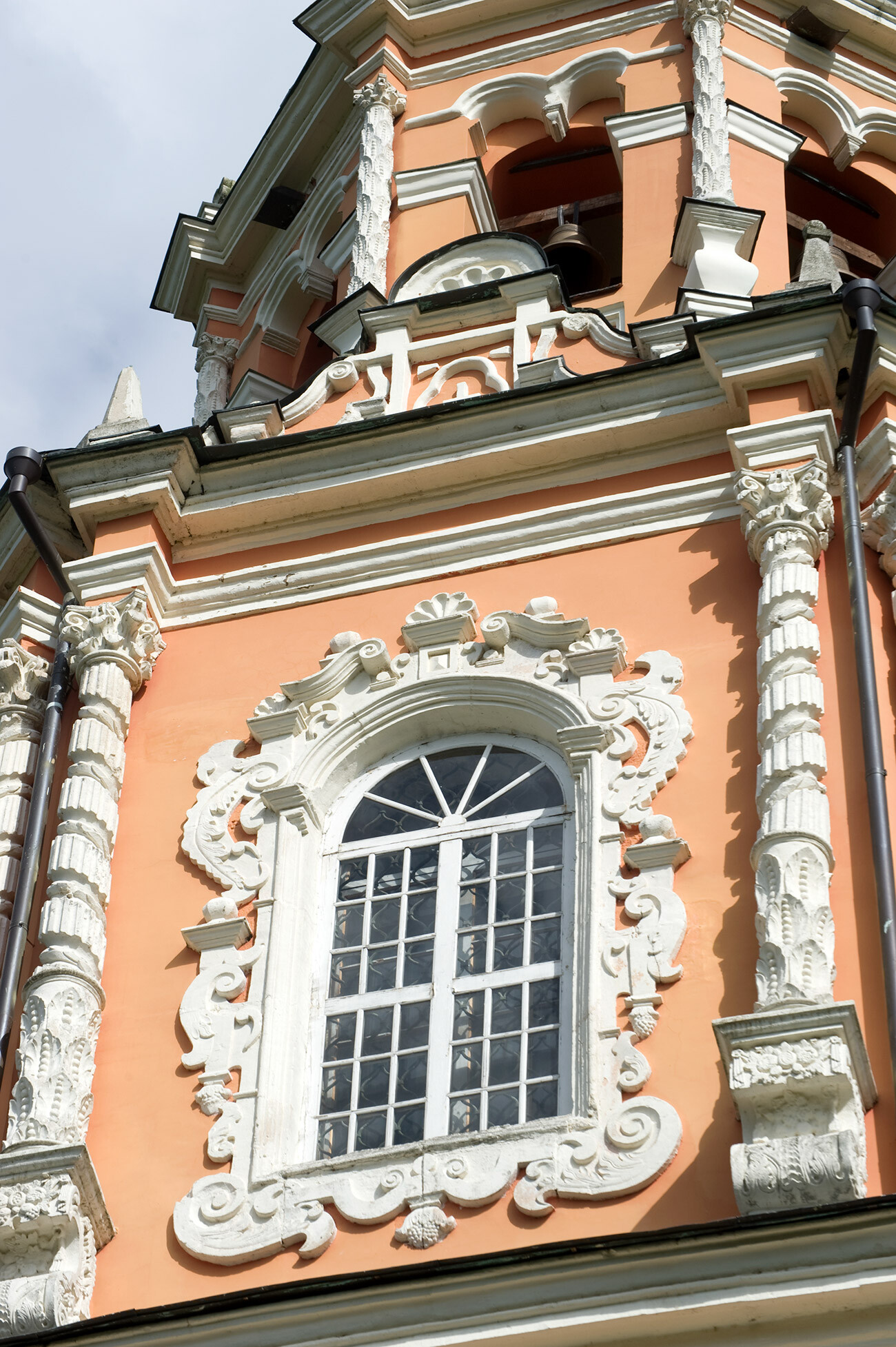 Their adventures took a new turn when Bukhvostov and his coworkers voluntarily made their way to Sheremetev, apologized and concluded a new contract to complete the church at the Ubory estate by July 1696.

Yet another eighteen months passed and the church was still not finished. The frustrated Sheremetev again sued the architect, who was arrested at the cathedral site in Ryazan and thrown into a Moscow jail.

During interrogation, Bukhvostov provided further details, including Sheremetev’s unilateral insistence that the height of the structure be increased. This was an understandable psychological impulse (the taller the structure, the greater the prestige), but one that increased the burden on the project budget. 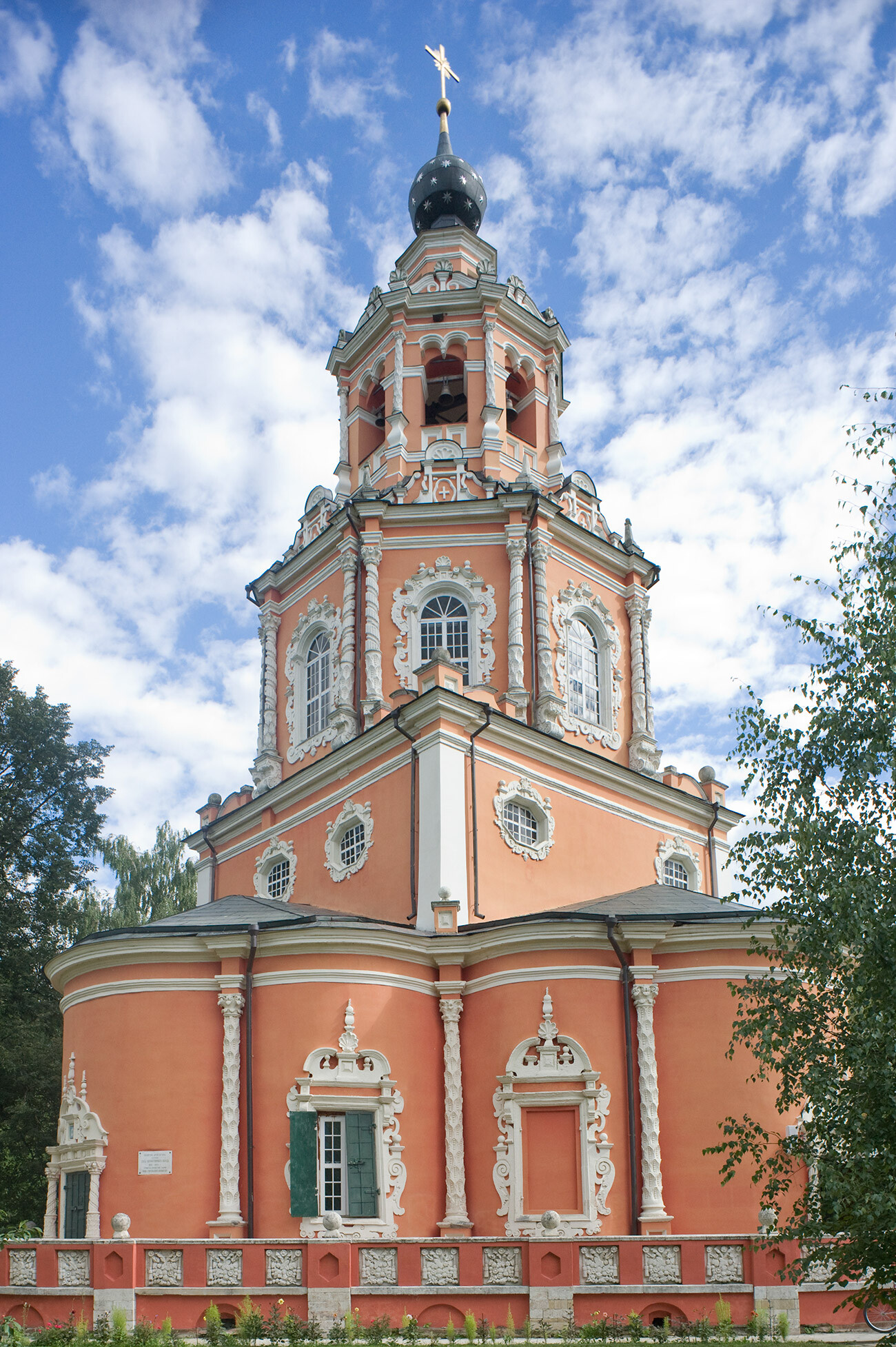 Ubory. Church of the Miraculous Icon of the Savior, northwest view. August 16, 2013

Not surprisingly, Sheremetev won his case. Bukhvostov was sentenced to be beaten with a knout, a whip used to inflict punishment (as a serf, he could be subjected to the most severe punishment), and then compelled to complete the church.

Fortunately, Sheremetev - aware of his failing health and desperate to see the church finished - made peace with the architect. In December 1696, he petitioned Tsar Peter to spare Bukhvostov from the mandated punishment. The serf architect’s great talent had saved him. 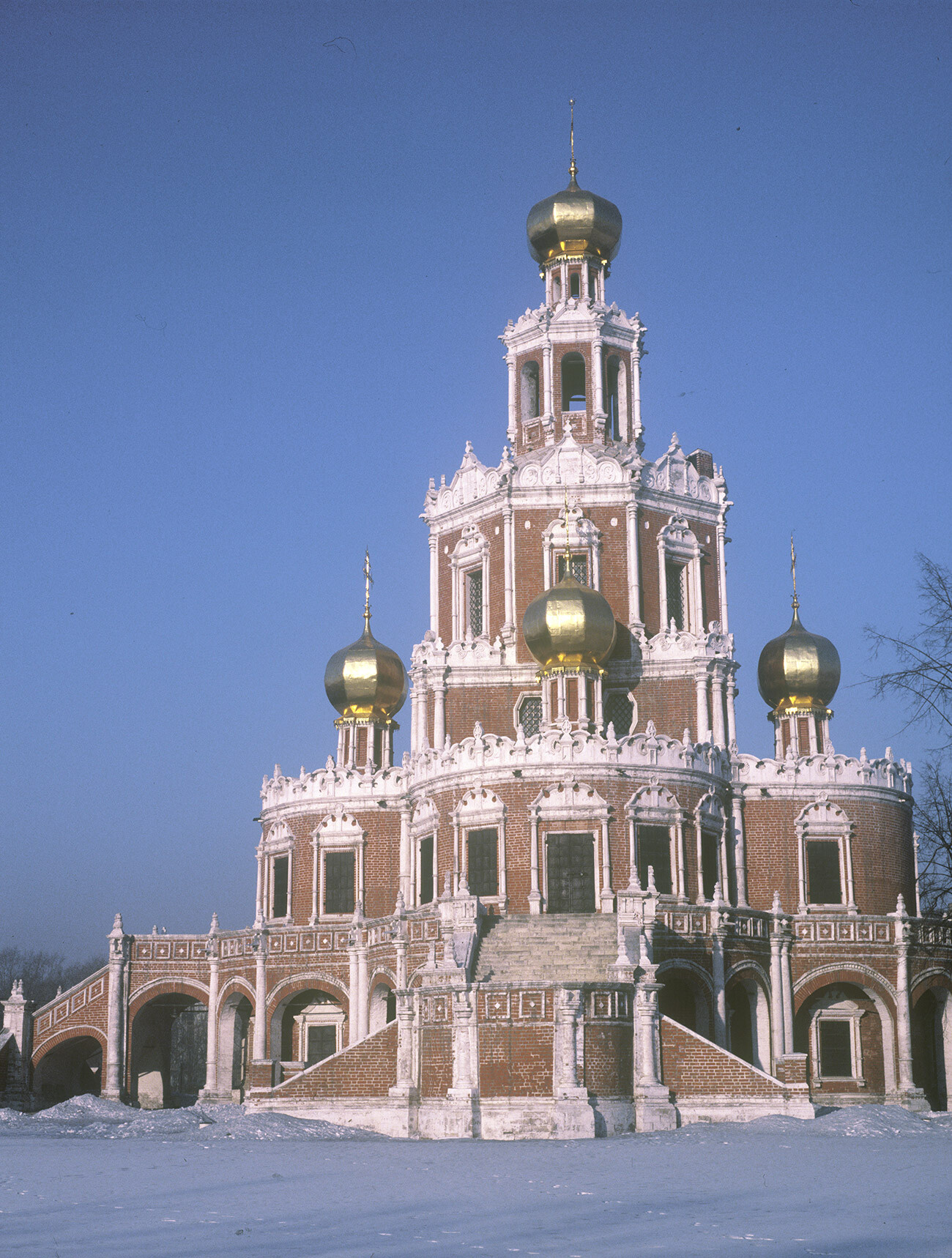 Fili (Moscow). Church of the Intercession of the Virgin, south view. February 1, 1984.

The basic structure of the Savior Church at Ubory was completed at the end of 1697, a few months after Sheremetev’s death. Nonetheless, much painstaking decorative work remained on the interior and the church was consecrated only in 1701. By that time, Sheremetev’s two sons - Alexey and Ivan - had inherited his estates. In 1708, both were sent to Holland and England by Tsar Peter to study navigation. After serving in the British Navy, Ivan Sheremetev (1689-1735) returned to Russia in 1716 and divided his time between Moscow and St. Petersburg, where he achieved high administrative positions. After the death of Alexey in 1723, Ivan became the sole owner of Ubory.

During the Napoleonic invasion, the Savior Church was directly on the route of a flanking wing of La Grande Armée and both the estate and the church were thoroughly ransacked by French troops. Subsequent repairs in the 19th century led to changes in the exterior appearance, but the church remained in the possession of a collateral branch of the Sheremetev family. 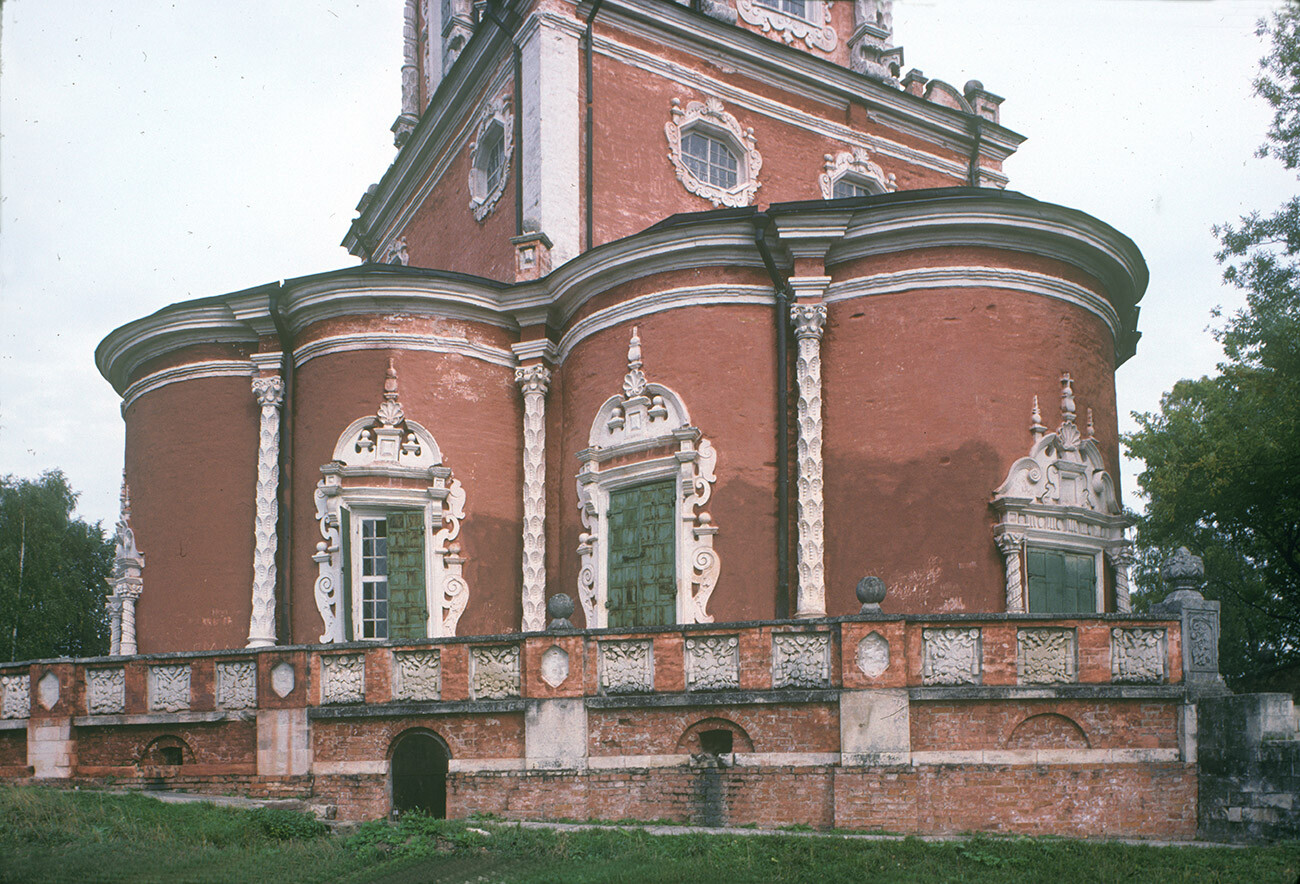 Even after the nationalization of estates in 1918, the Savior Church at Ubory continued to function as a parish church, until its conversion into a club in 1941. However, in 1932, the interior was stripped and its great icon screen burned. After the war the building was used to store hay. 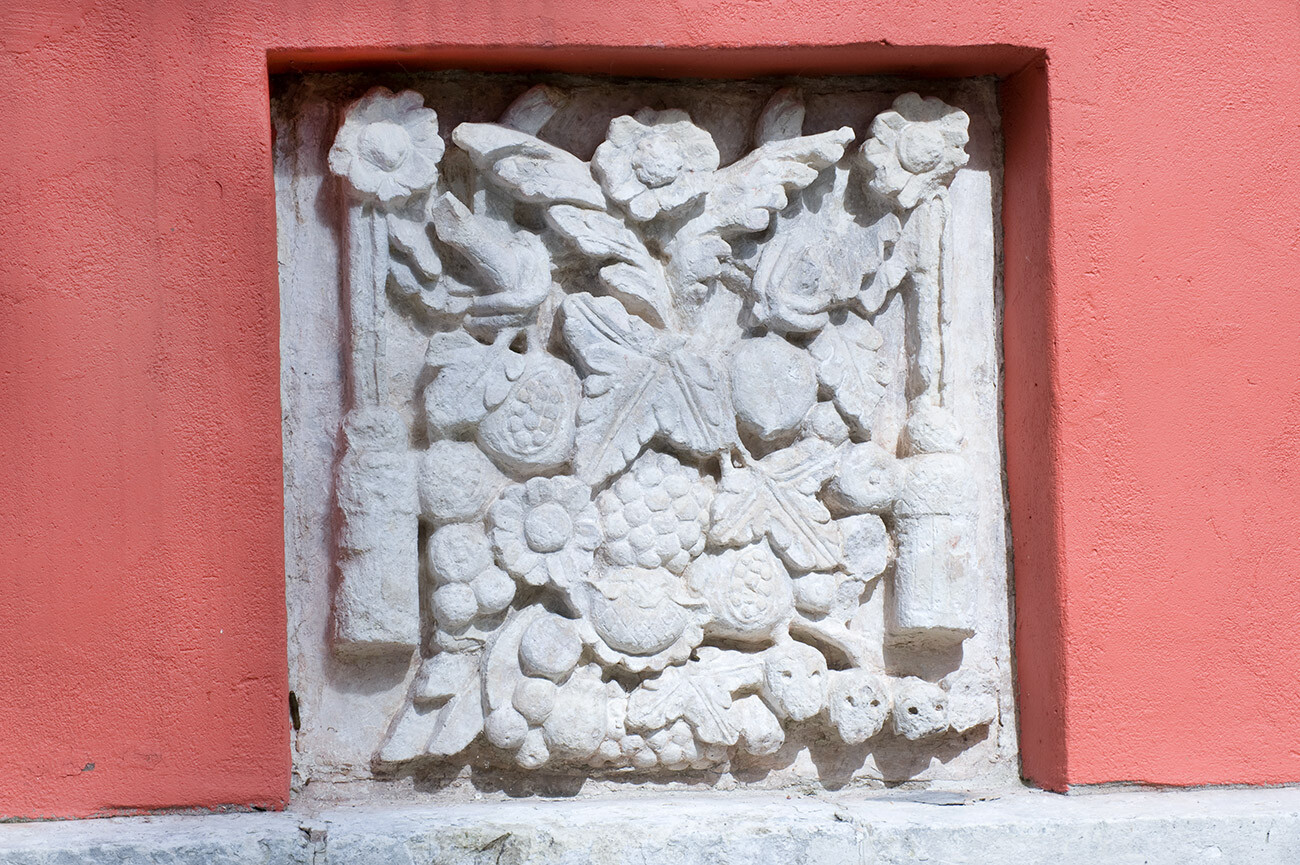 Yet again, Bukhvostov’s status came to his rescue. During a post-war emphasis on national Russian values, this serf architect achieved the status of cultural paragon. In 1950, the Ubory church was designated a cultural monument and work began on preserving - or at least conserving - the sadly neglected, damaged structure.

Indeed, the stunningly beautiful church served as a backdrop for a number of popular films in the 1980s and even later, yet this did little to address major threats to the structure caused by prolonged neglect. In 1995, the church returned to a local parish on the initiative of Patriarch Aleksy II, but a permanent priest was appointed only in 2005. Three years later, major restoration work led to essential structural restoration, as well as a new icon screen and set of bells. 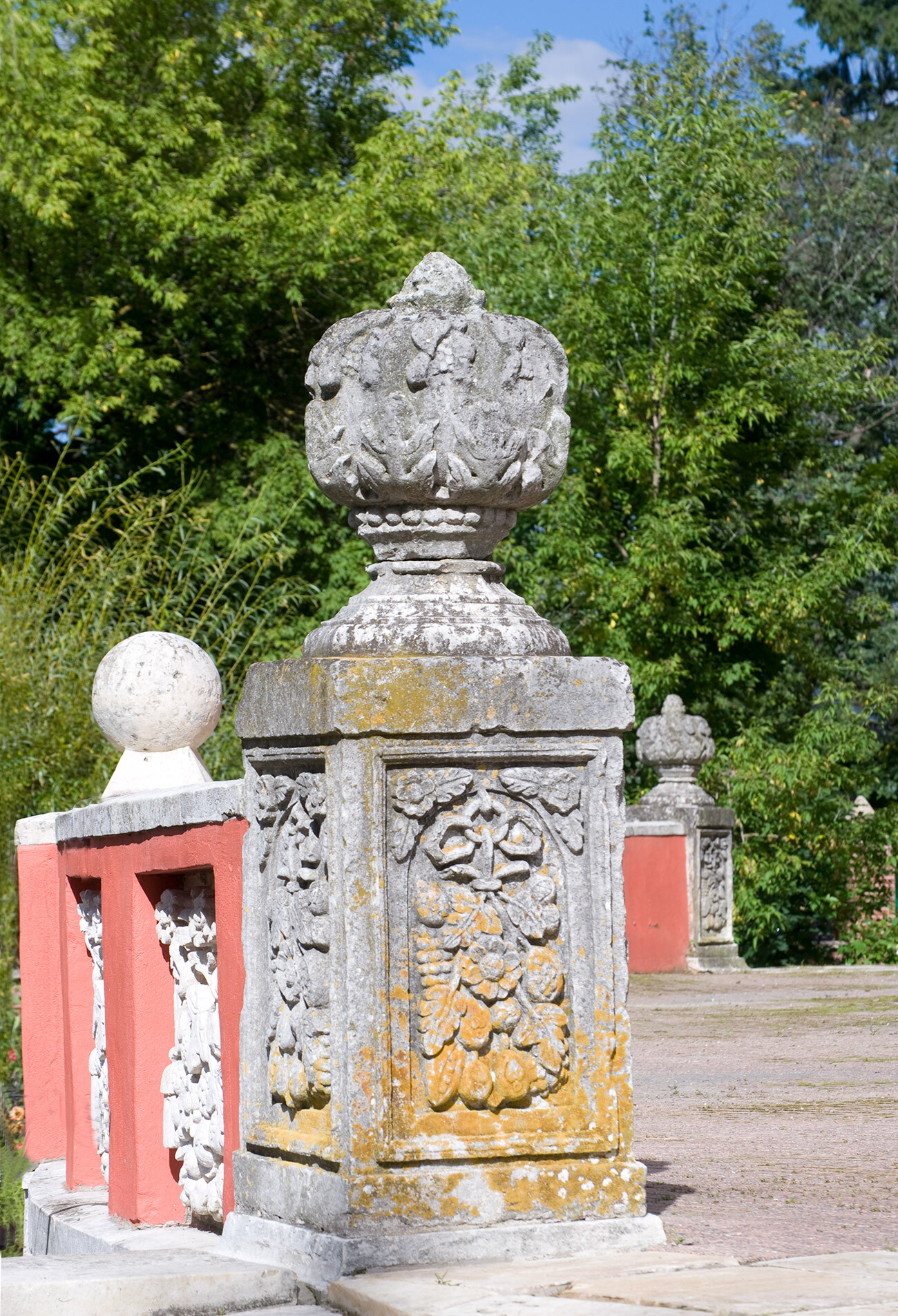 The Savior Church at Ubory is justifiably considered one of the major monuments of Russian architecture at the turn of the 18th century. The bright color of the stuccoed brick facades is everywhere delineated by carved limestone detailing. The tower is crowned by a superb bell gable with a decorative limestone cornice. 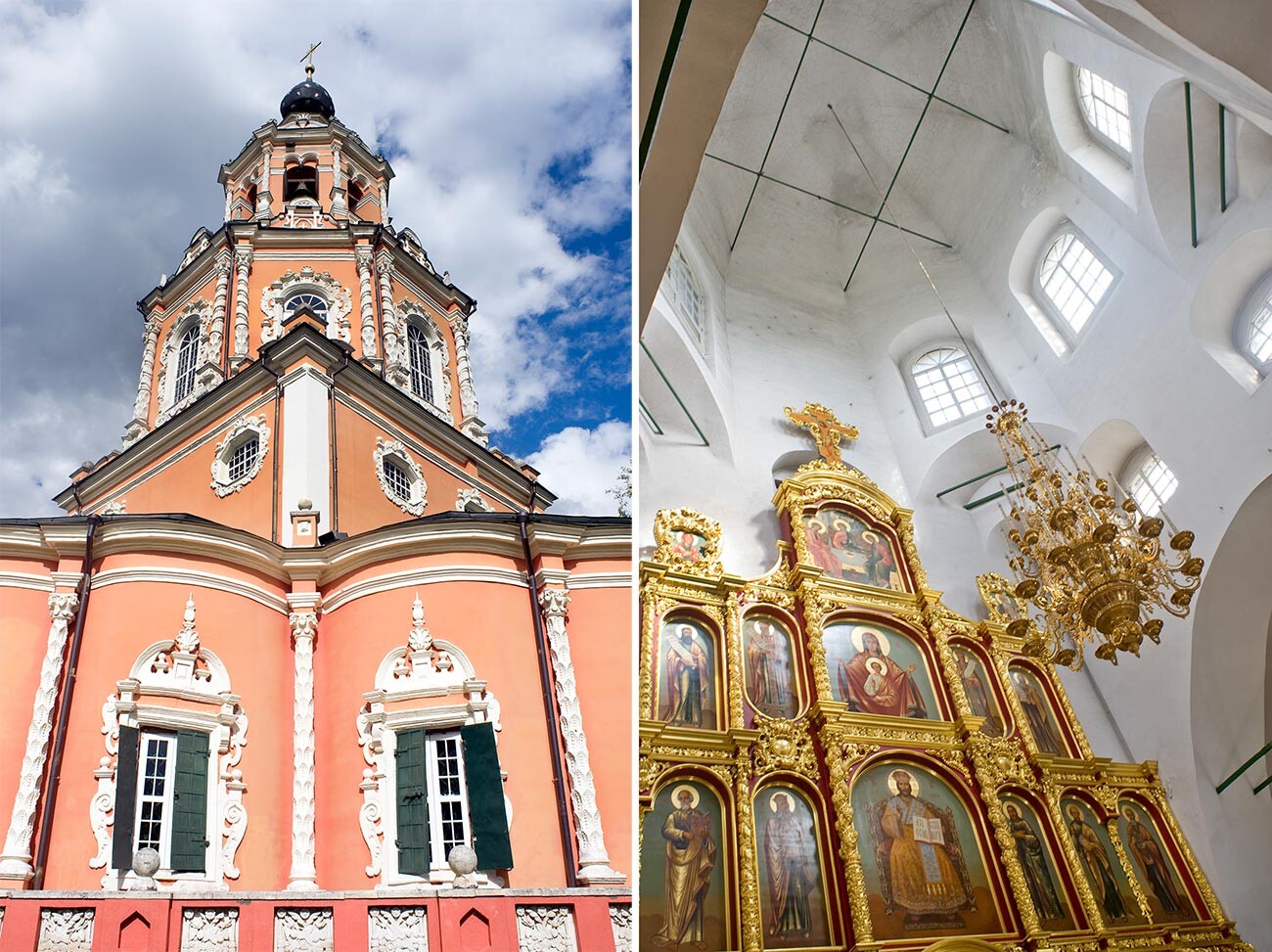 The Ubory church can be compared with other tower shrines in the so-called ‘Naryshkin style’, such as the Church of the Intercession at Fili (discussed in a subsequent article). Yet, the church at Ubory shows a curious relation of its parts, due to Sheremetev’s insistence on extending the height of the central cube supporting the octagonal tiers of the tower.

As a result, the visual harmony of proportions in relation to the ground plan is distended in comparison with the church at Fili, where the octagonal tower rises directly above the intersection of the four lobes. The overweight effect is mitigated, however, by the terrace - lower and wider than at Fili - which amply frames the four lobes at the base. Each lobe has trefoil contours that are marked by distinctive rustic hewn limestone columns. The windows are also framed by decorative carved limestone, and the terrace balustrade has recessed carved panels. 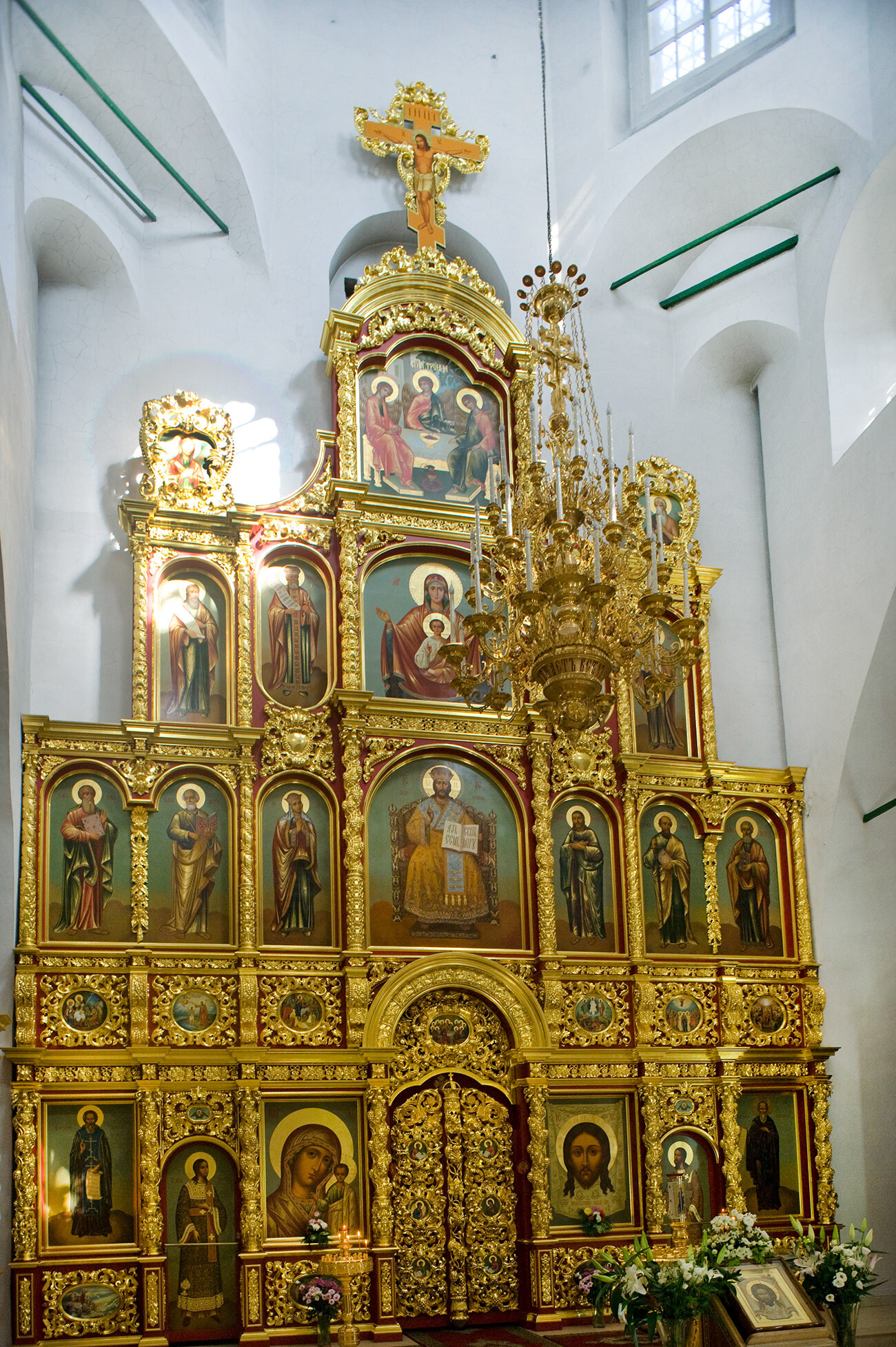 Ubory. Church of the Miraculous Icon of the Savior. View east with new icon screen. August 16, 2013

The Ubory church’s interior is considered the most accomplished spatial design of the period, with the volume of the attached lobes flowing into the core space of the tower. The impression of height is intensified by the multiple tiers of the gilded icon screen.

Despite their fraught relationship, Count Sheremetev and serf architect Bukhvostov created a masterpiece within a forested setting of lyrical beauty on the upper reaches of the Moscow River. 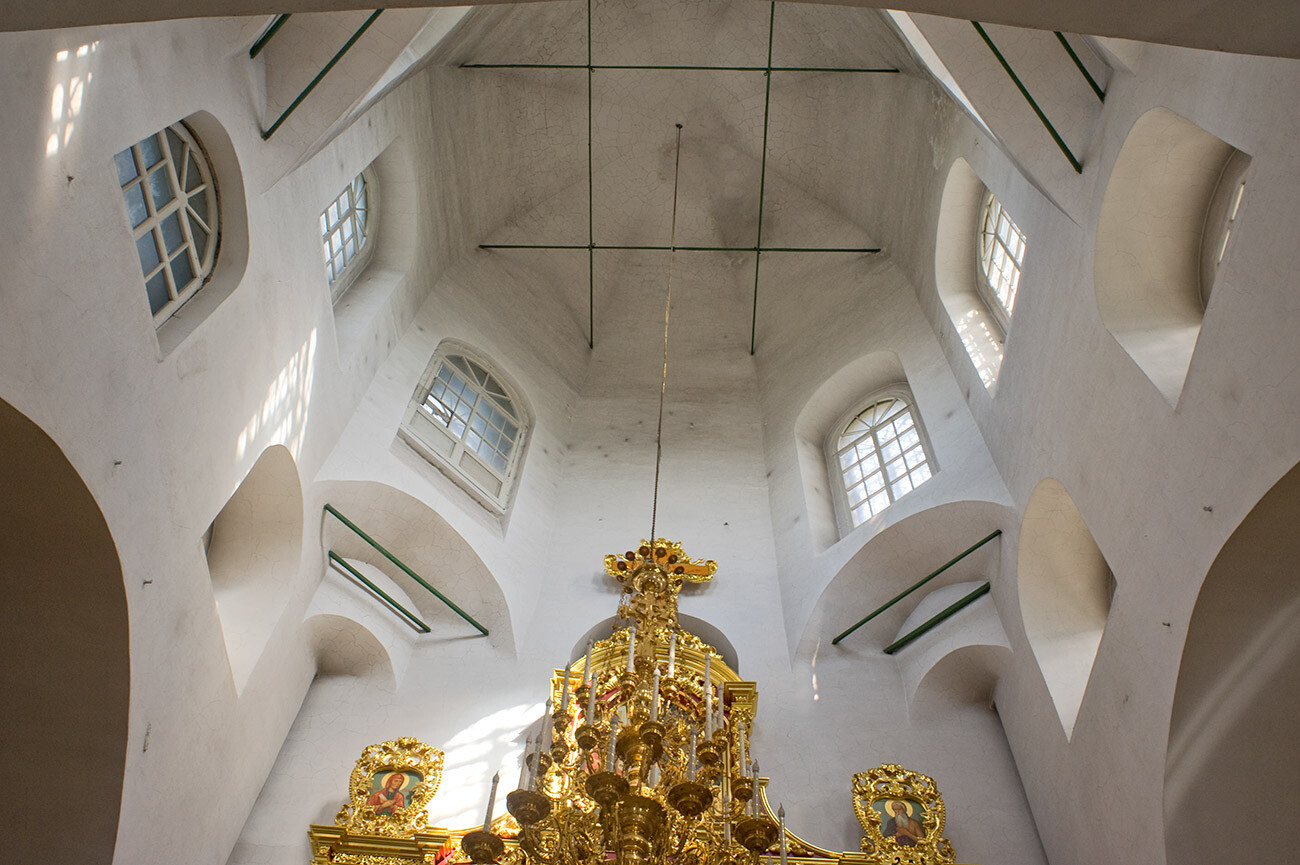 Ubory. Church of the Miraculous Icon of the Savior. Interior view with tower vaulting. August 16, 2013