Travel
Russia Beyond
A beach with a mountain view, hidden bays, party places, blue flag beaches – we’ll show you where to find the best public beaches with free entry. 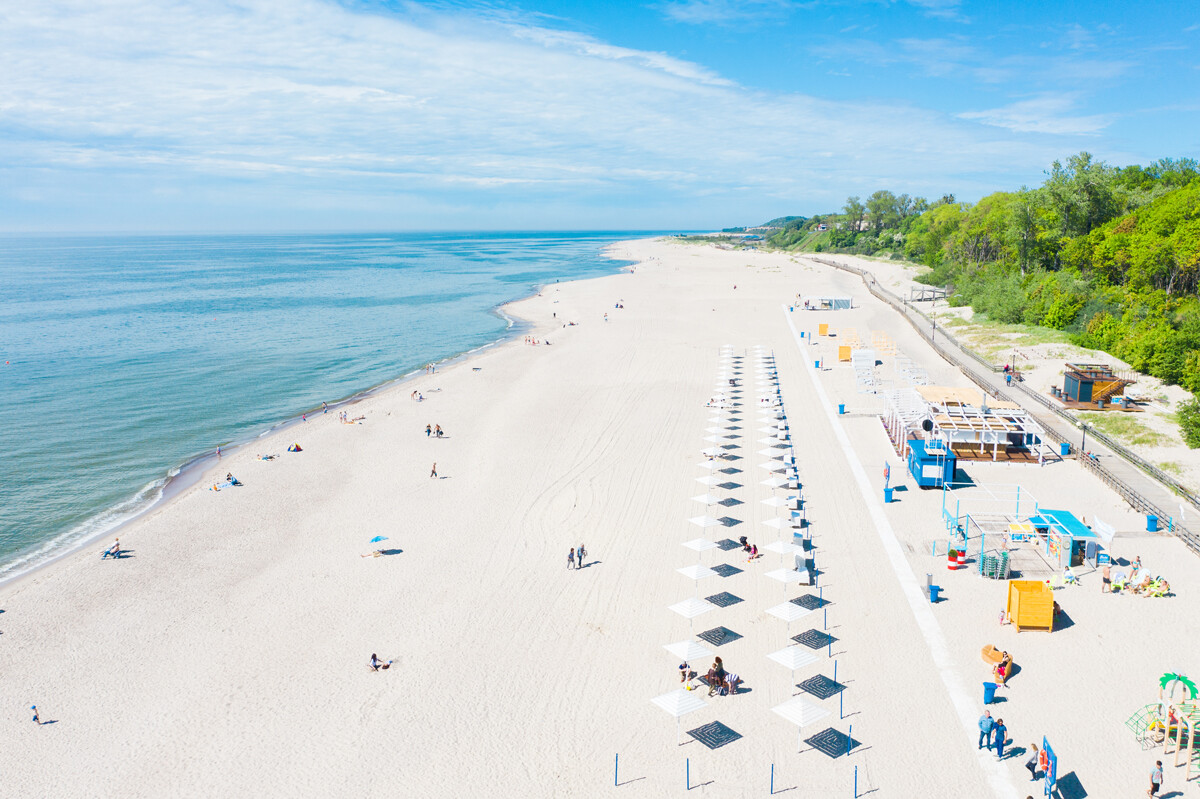 The beach of the Yantarny village in Kaliningrad Region on the coast of the Baltic Sea became the first Russian beach to receive the ‘Blue Flag’ award – an international certification for beaches and marinas of high quality. This happened back in 2016. Now, Yantarny boasts not one, but two blue flag beaches: the Central Beach and the neighboring Amber Beach.

These are spacious beaches with fine snow-white sand, good infrastructure and a pine forest around them. Since these beaches aren’t that close to Kaliningrad (48 kilometers or an hour away by car), they’re not crowded and one can always find a free spot. At these beaches, they sell oysters (instead of corn- and hot-dogs) and the locals wander around looking for washed-up amber after a storm.

2. Gardens of the Seas, Gelendzhik 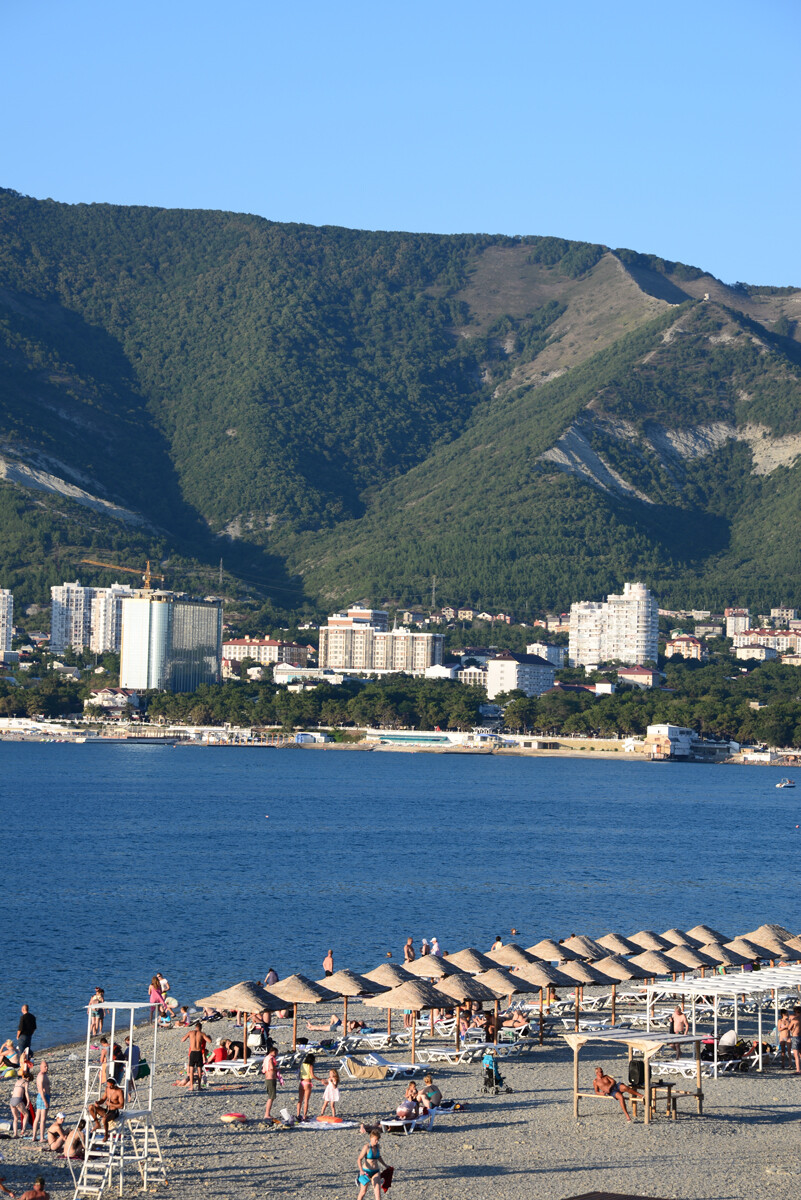 Beautiful Gelendzhik is located in Krasnodar Krai (Territory), on the coast of the Black Sea. The local bays are famous for their pebble beaches, reminiscent of those in Italy: with their turquoise waves, steep cliffs, mountains and fragrant pine trees all around. One of the best beaches of Gelendzhik is called ‘Gardens of the Seas’, a small comfortable beach with a fantastic view of the bay and the mountains. Entry is free and visitors can enjoy sun loungers, cafes, stand up paddle boards, and sea tours. Unlike the central beaches of Gelendzhik, this beach is considered to be cleaner and calmer, with a gentle, gradually deepening entry into the water. 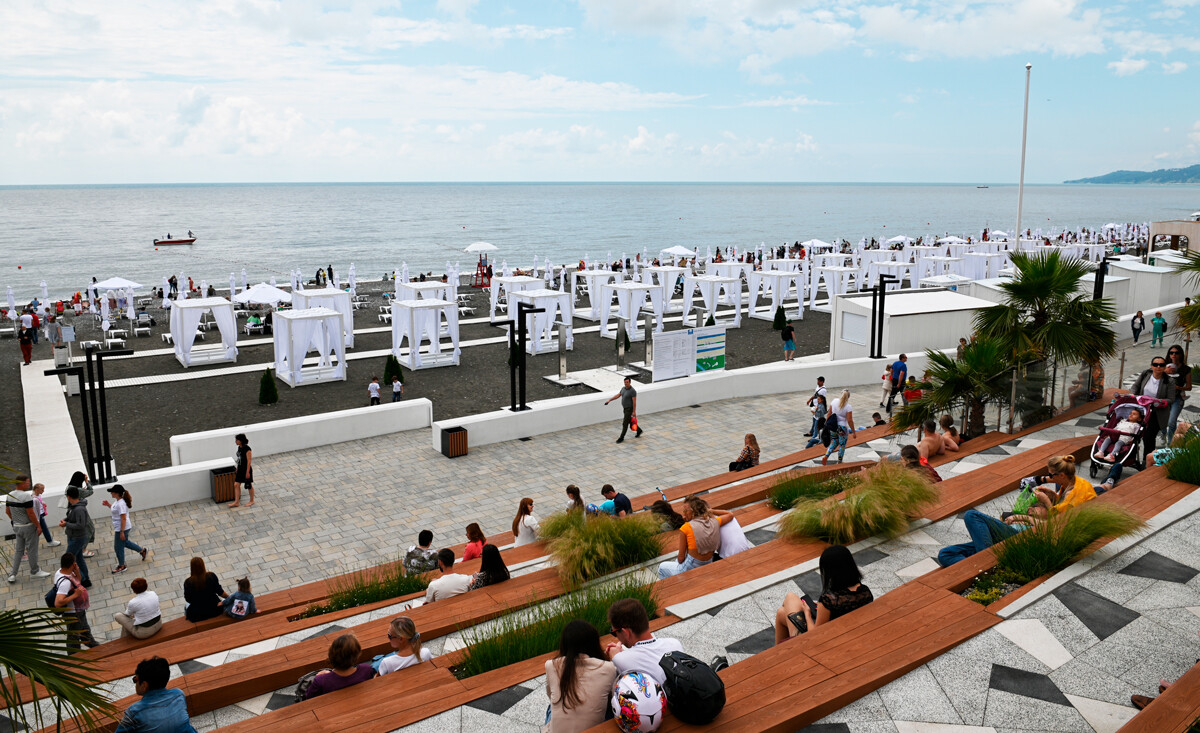 The best and one of the most popular beaches of Sochi in the Krasnodar Territory is a place for hanging out, sunsets, beach parties and for relaxing on snow-white sun loungers.

In 2020, this beach in the central district of Sochi received the title of the best architectural structure of Krasnodar Territory, thanks to a large-scale reconstruction conducted by ‘ab2’ architectural bureau. After its reconstruction, this place became the city’s focal point. Now, the Riviera beach complex includes a charming green public garden, a fitness zone, a children’s playground, a rope park, an amphitheater and dozens of restaurants with panoramic views. 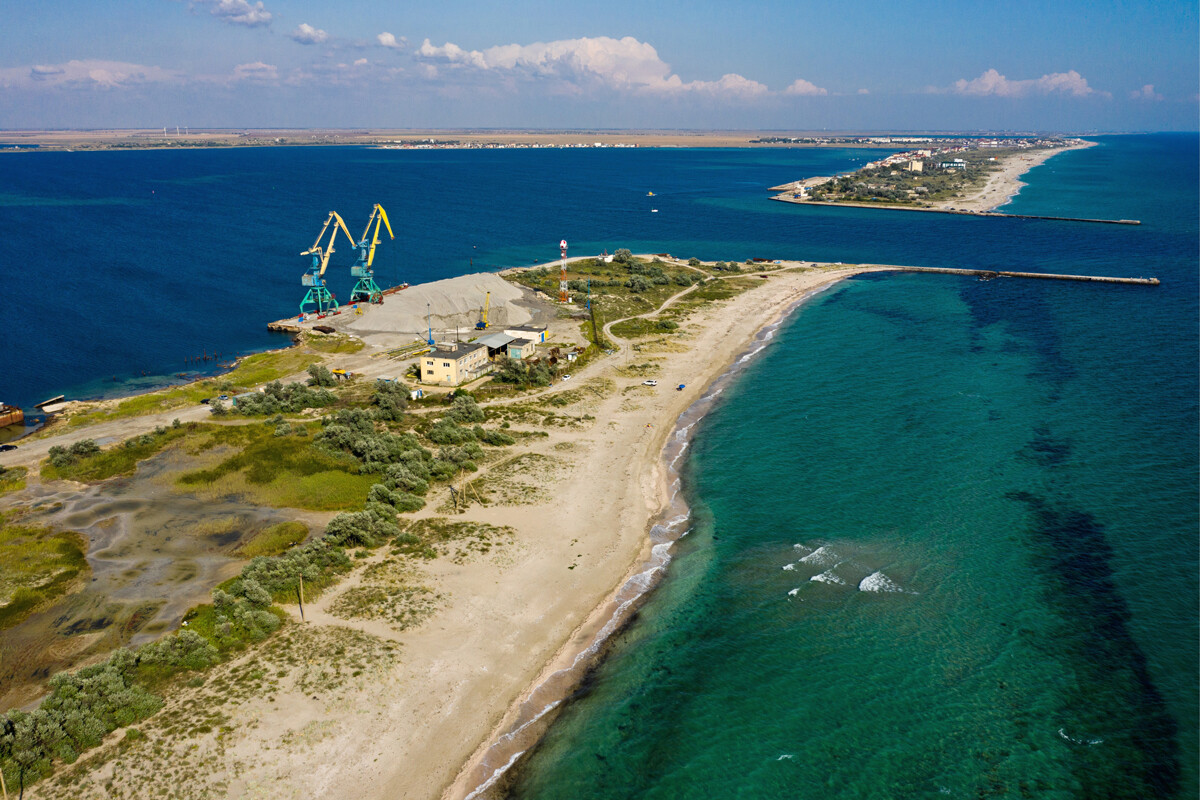 For its white-sand beach and its turquoise waters, this place in Crimea has been dubbed ‘the Crimean Maldives’. No other beach in Crimea has water quite as clear as this one. The spit separates the Black Sea and Lake Donuzlav and it’s 10 kilometers long. It’s a calm, not too crowded place; there’s no infrastructure at all, so people love to make tent camping trips there. But, not too far away, there’s an entire tourist village with hotels and restaurants.

Another feature of this spit is its historical significance. Ruins of an ancient Greek and Scythian settlement lie there, which one can explore for free in between sunbathing. 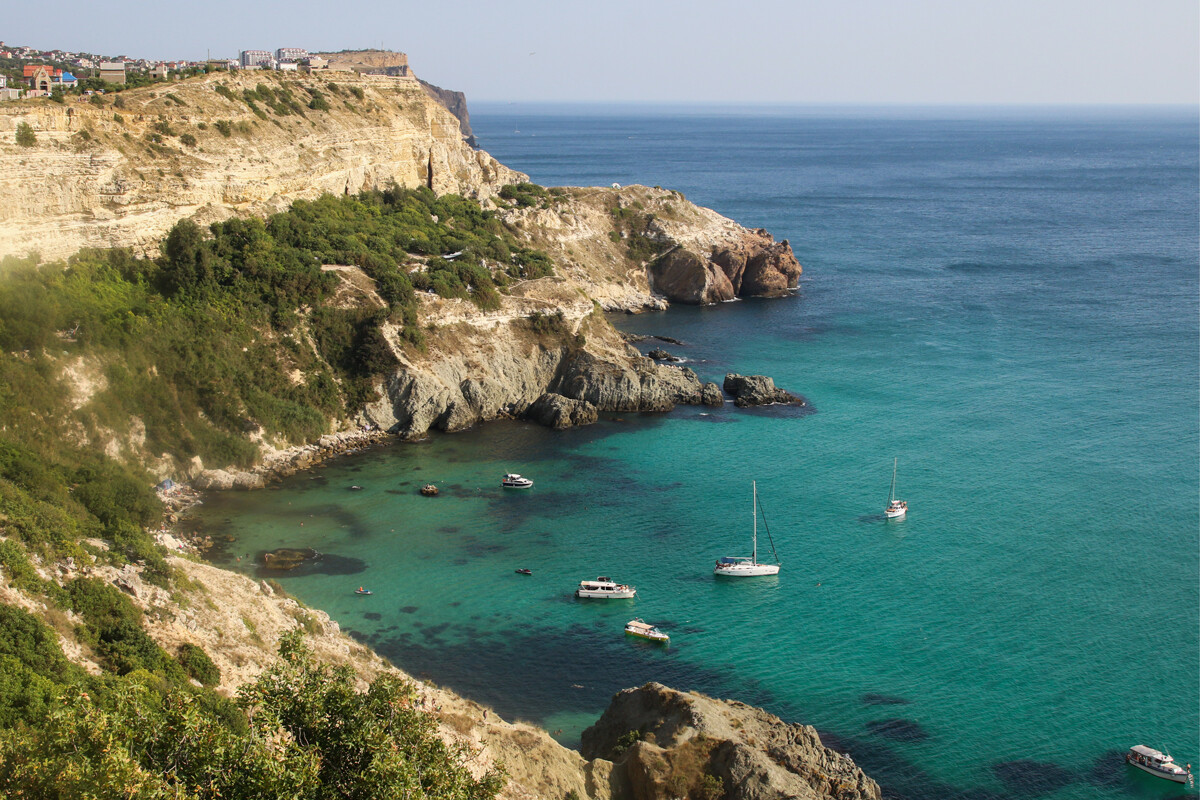 Bounty Beach or Alexandra Bay (officially) is located at Cape Fiolent on the south-western coast of Crimea. This is a “wild” beach and people go there not for comfort and infrastructure, but for an Instagram-worthy view from the top. The bay looks incredible thanks not only to the rocks, rising from beneath the waves, but also thanks to the anchored yachts below – a lot of people sail there for a swim.

There are several descents to the beach – rough and wild, too – so you should come prepared with comfortable footwear. The entry to the water becomes very deep almost immediately, so many visitors enjoy diving from the rocks. 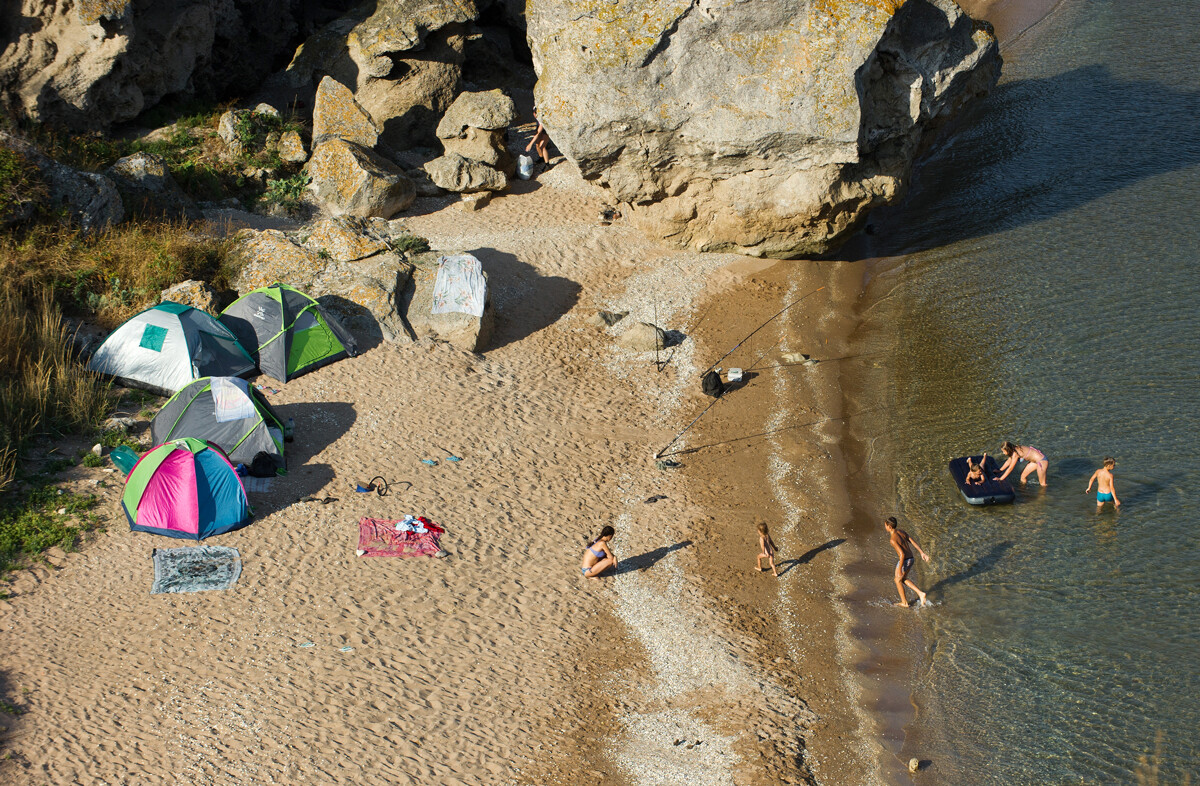 Its other name is the ‘Coast of a Thousand Bays’. This picturesque beach stretches 12 kilometers away from Kerch on the coast of the Sea of Azov. Rocks of a peculiar shape (for example, the Arch rock, a popular Instagram spot) form a multitude of different bays. This place is loved by fans of secluded tent camping and by those who are into yoga and spirituality. The sea here is not deep and the water warms up better than in the Black Sea. It’s a joy to swim at Generals’ Beaches, even in May! 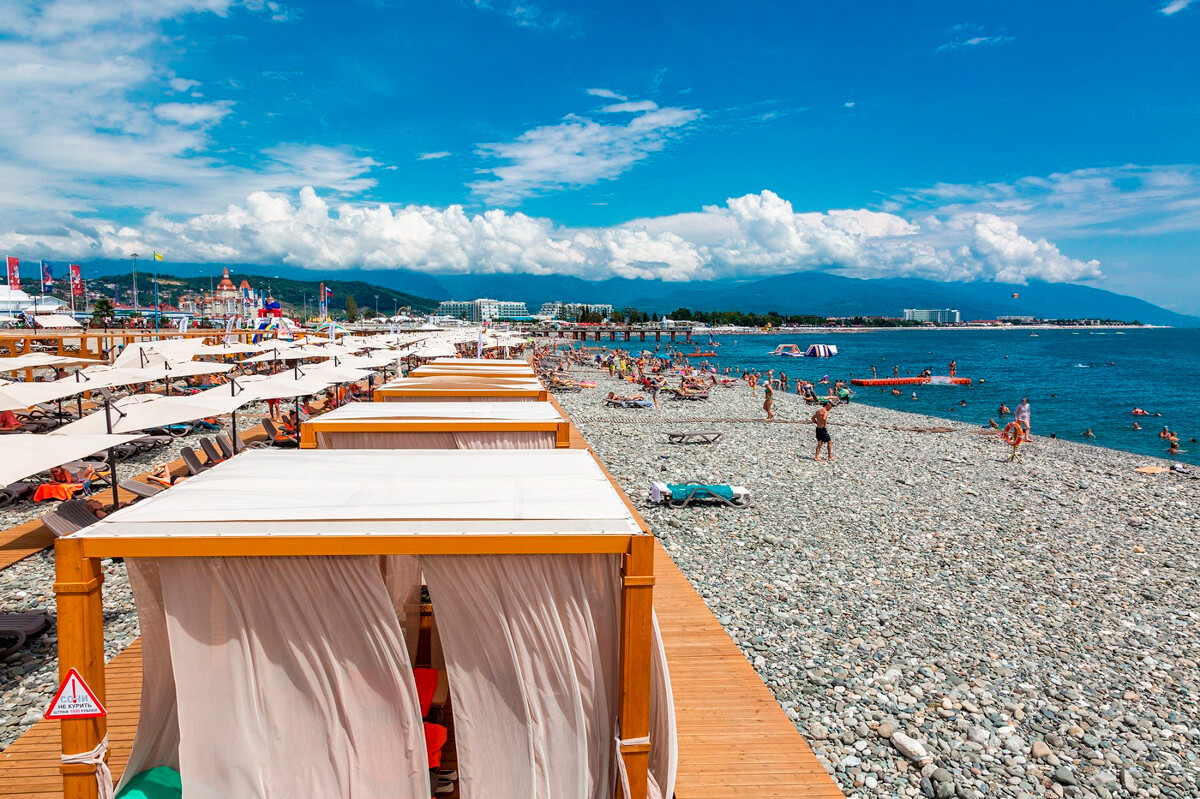 This is another famous Sochi beach. It belongs to a mountain resort of the same name and is located in Sochi Olympic Park right across from Fisht Olympic Stadium. After an eventful day in the mountains, the best way to spend the evening is to watch the sunset at this beach.

The beach is formed by large pebbles, but there’s plenty of wooden decking. Guests of the beach praise it for its comfortable loungers and cleanliness. Apart from the usual features, this beach has a special float for diving, as well as diving equipment and stand up paddle boards for rent. 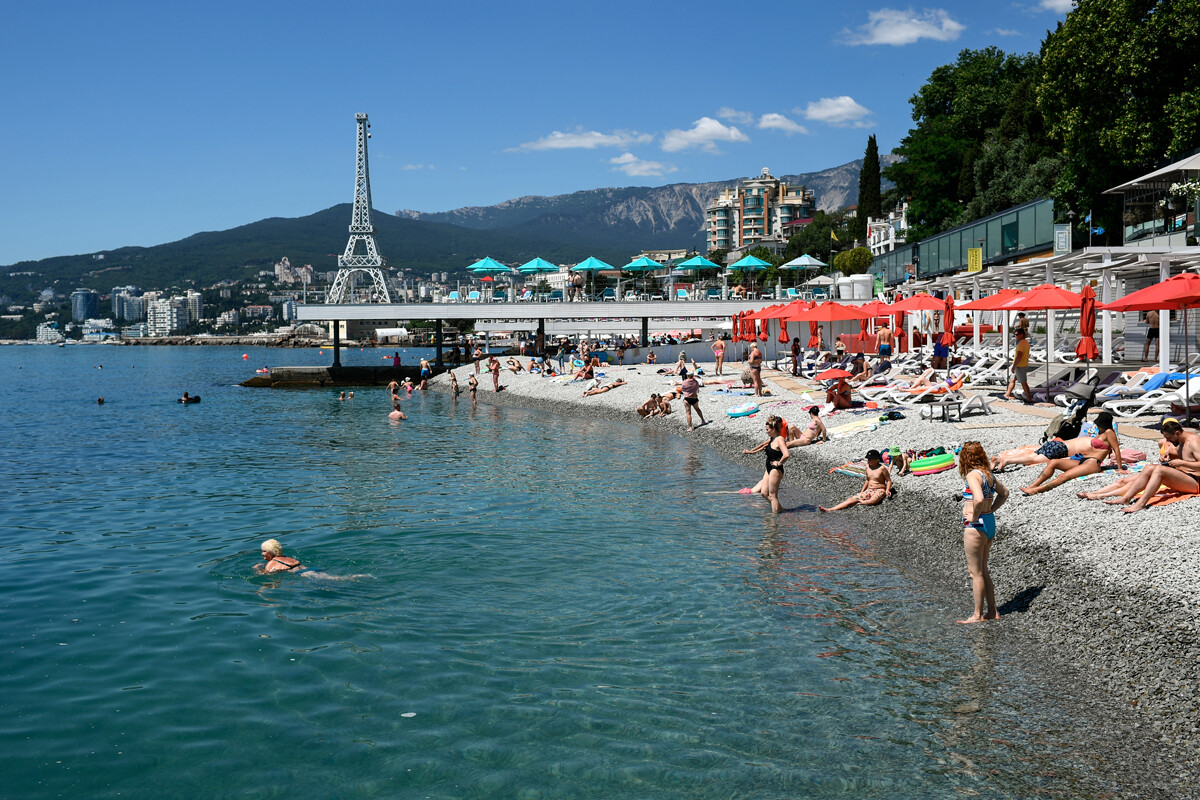 The most popular and comfortable beach in Yalta has received the Blue Flag award for several years straight. It’s right in the middle of the city, just seven minutes away from the city’s marine station.

The beach has all the necessary infrastructure – from changing cabins to showers – but it also has a massage room. In the mornings, the beach hosts yoga classes. In the evenings, Massandra Beach turns into one large, open-air cafe: the tables are taken out right onto the beach. 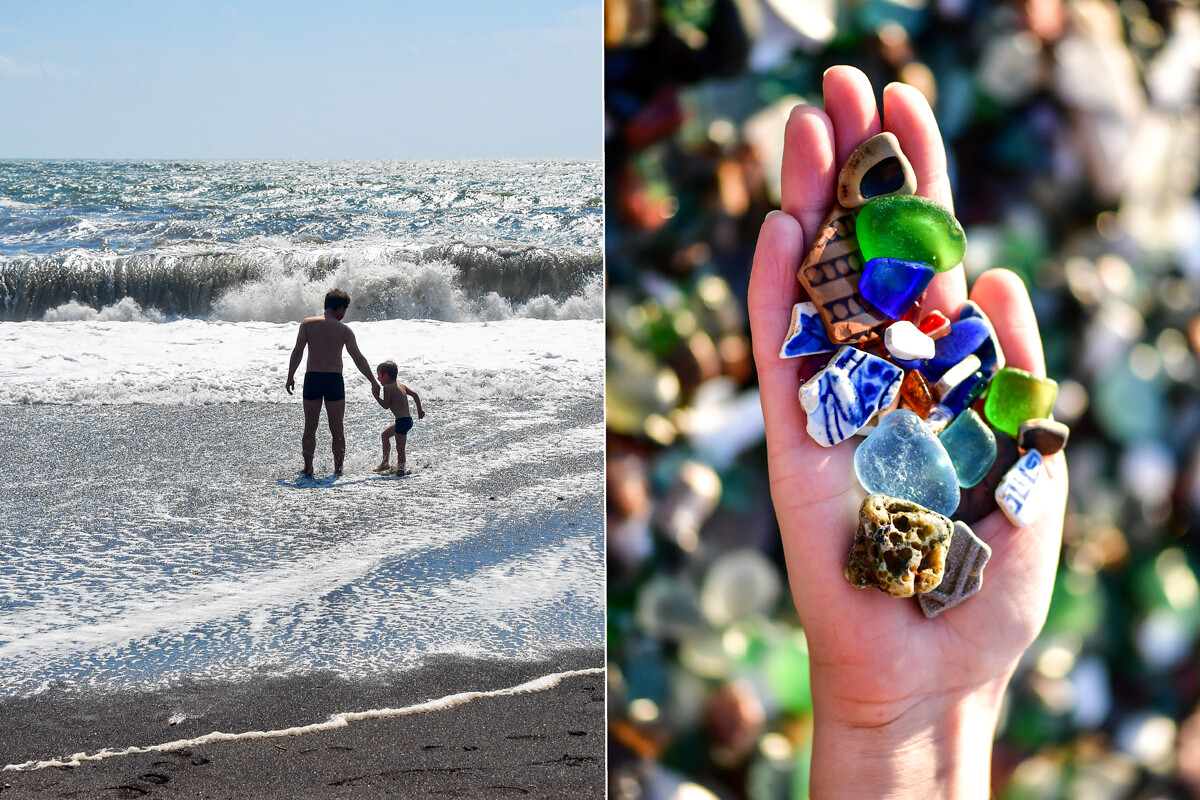 Near Vladivostok, on the coast of Ussuri Bay, lies a beach similar to California’s Glass Beach in MacKerricher State Park. It’s a beach formed by pieces of glass and pebbles instead of sand, polished by the sea. In sunlight, the glass pieces sparkle like gems!

The history of the beach is not as pretty: once, there was a city landfill nearby, with heaps of old dishes, glass and ceramic tiles. The water washed over and polished the glass and ceramics over a long time and finally carried them to this shore. It’s safe to swim at this beach now and the beach territory features toilets, pavilions, tables and holiday homes. 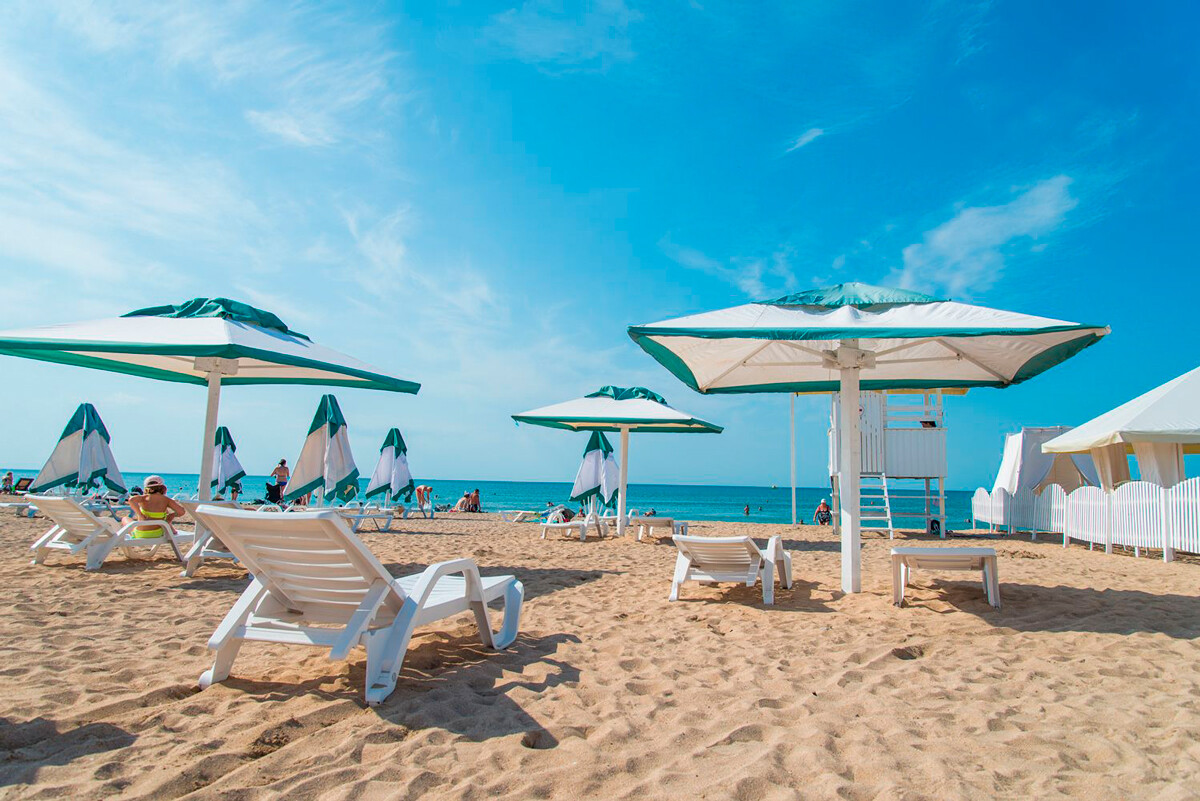 Yevpatoria, located in the Crimean West, features about 70 beaches; the Azure Coast is definitely one of the best. Fine white sand, white bungalows, lots of space and clean territory – that’s what this beach can offer. You can also rent a catamaran there or engage in water sports.