Epiphany at Oshevensk: A masterpiece in the Russian North

Travel
William Brumfield
Architectural historian and photographer William Brumfield marvels at a magnificent surviving 235-year-old wooden church in Arkhangelsk Region and how it signifies a continuation of Russian art into the 21st century. 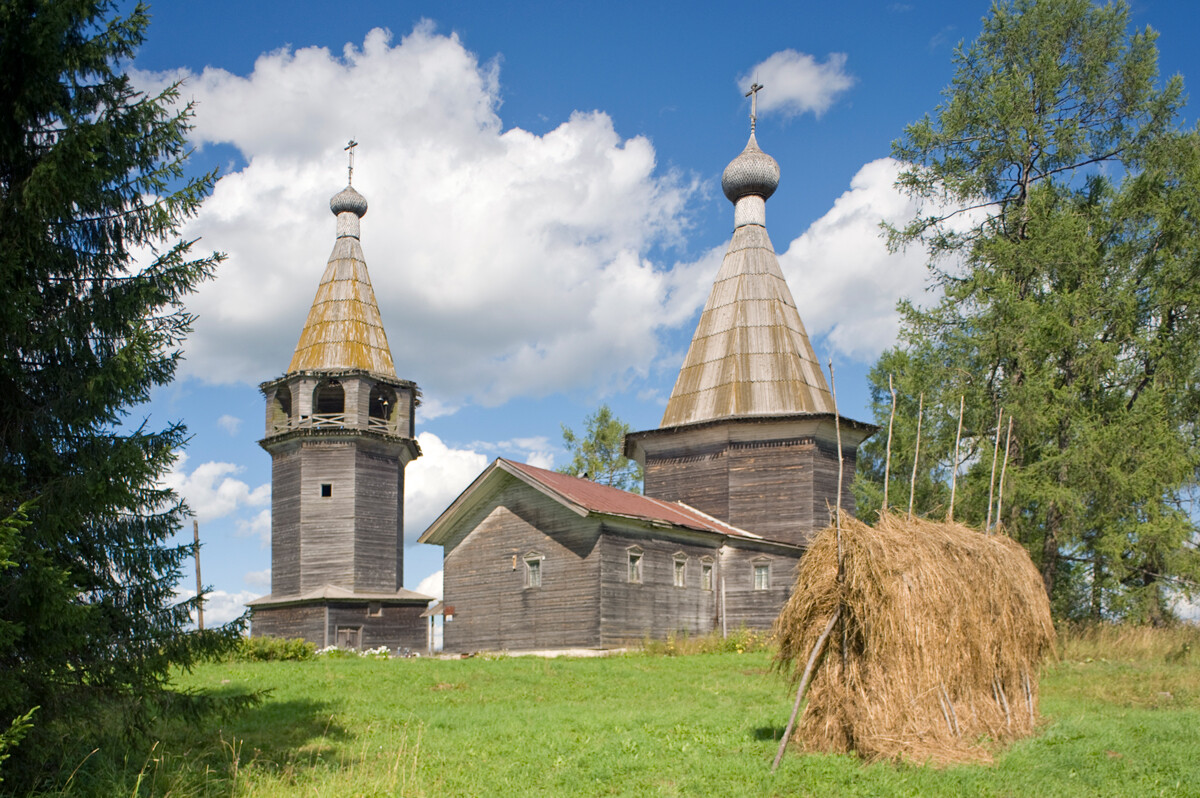 At the beginning of the 20th century, Russian chemist and photographer Sergey Prokudin-Gorsky developed a complex process for vivid, detailed color photography. Inspired to use this new method to record the diversity of the Russian Empire, he photographed numerous historic sites during the decade before the abdication of Tsar Nicholas II in 1917. 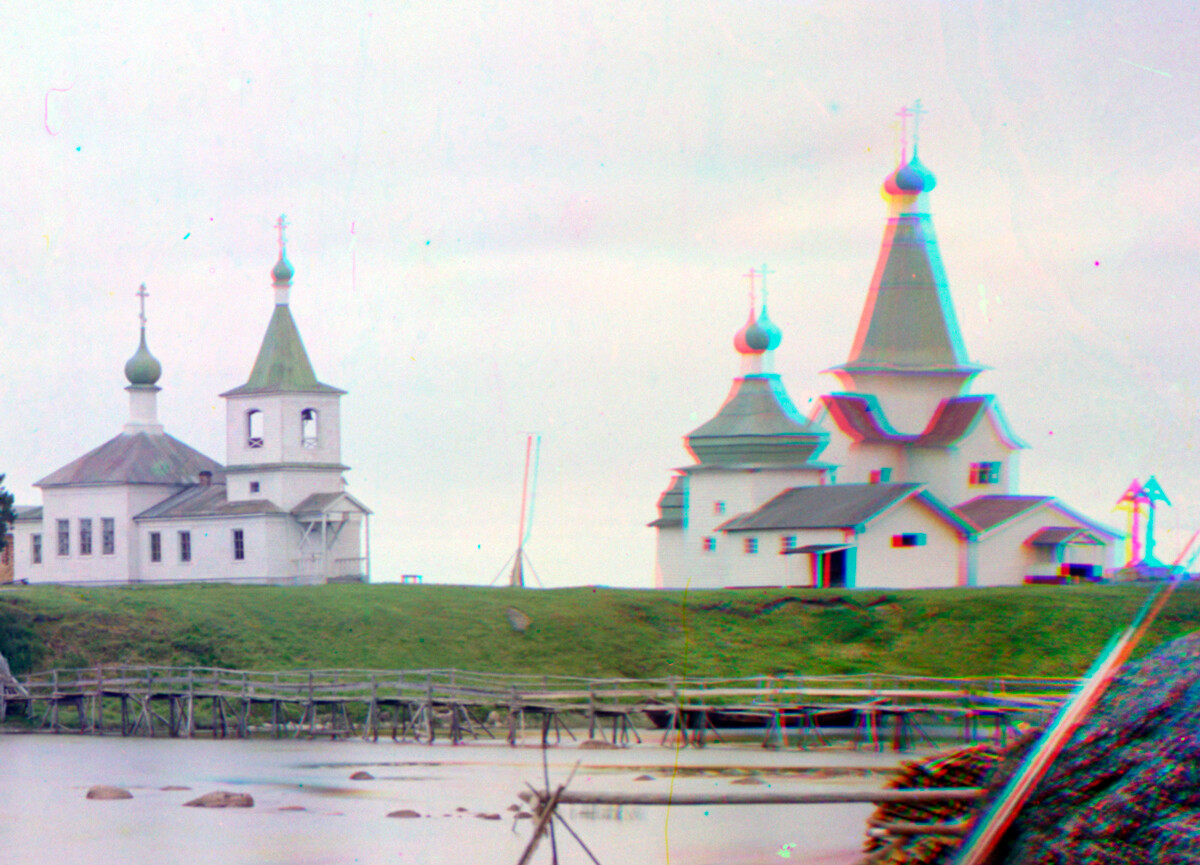 Prokudin-Gorsky’s last expedition occurred along the railroad under construction on the western coast of the White Sea during the summer of 1916 as the Great War raged in Europe. Most of the sites he visited that summer belong to an area known as Karelia. With its ample forests, Karelia is rich in monuments of traditional wooden architecture, particularly churches. 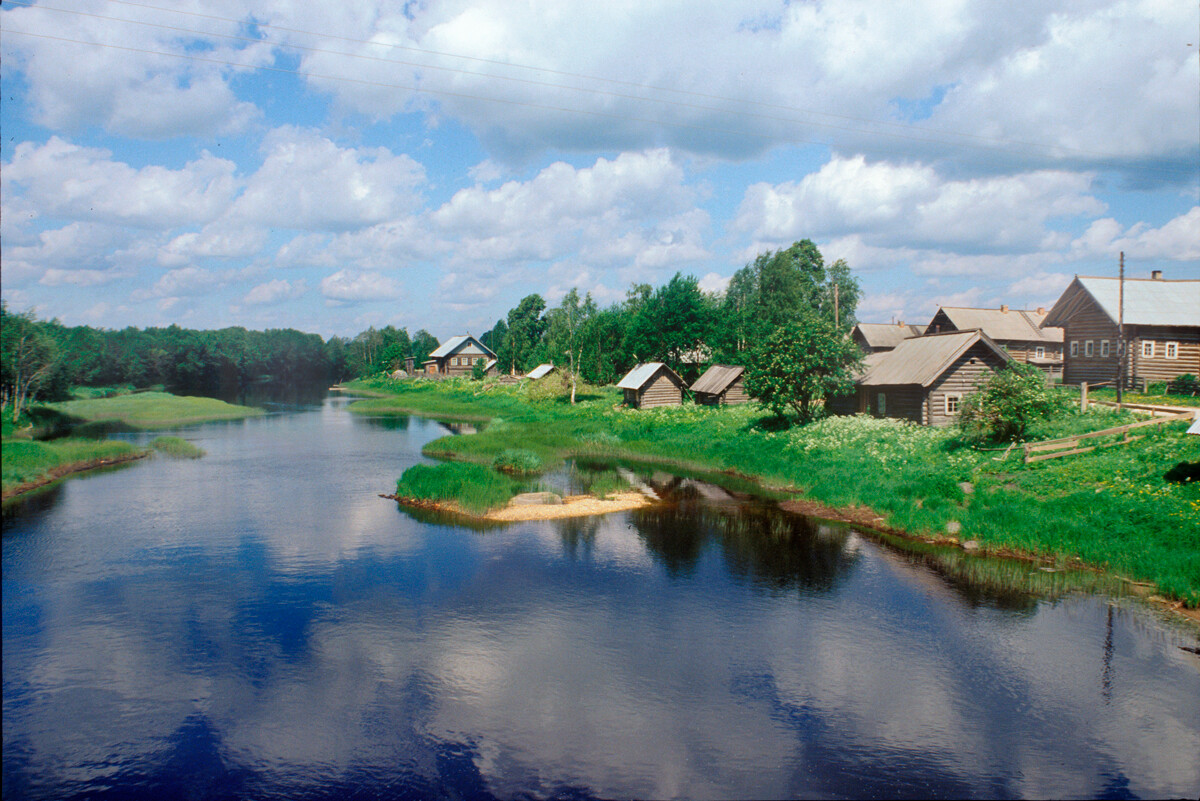 The dominant feature of the Shuya ensemble photographed by Prokudin-Gorsky was the Church of St. Nicholas, capped with its distinctively northern tall tower known as a ‘tent’ (in Russian: shatyor). Provisionally dated to the turn of the 17th century, the St. Nicholas Church was clad in plank siding in the late 19th century, as were the adjacent churches. 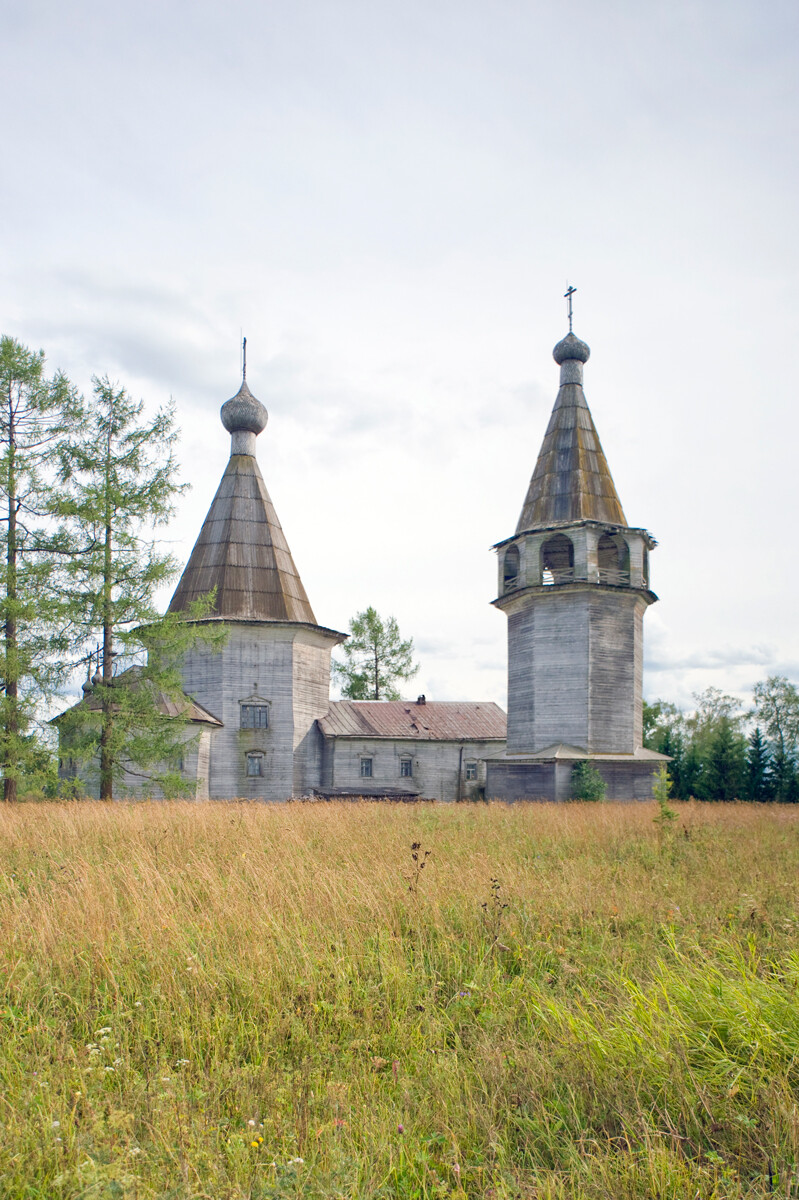 None of these monuments has survived. Closed and vandalized during the early Soviet period, the churches were known to be in a deplorable state after the war. All three were destroyed, apparently from fire ignited by a lightning strike in 1947. Fortunately, there are similar “tent” structures still standing in the Russian North, where I have photographed extensively over the past three decades.

The Church of the Epiphany 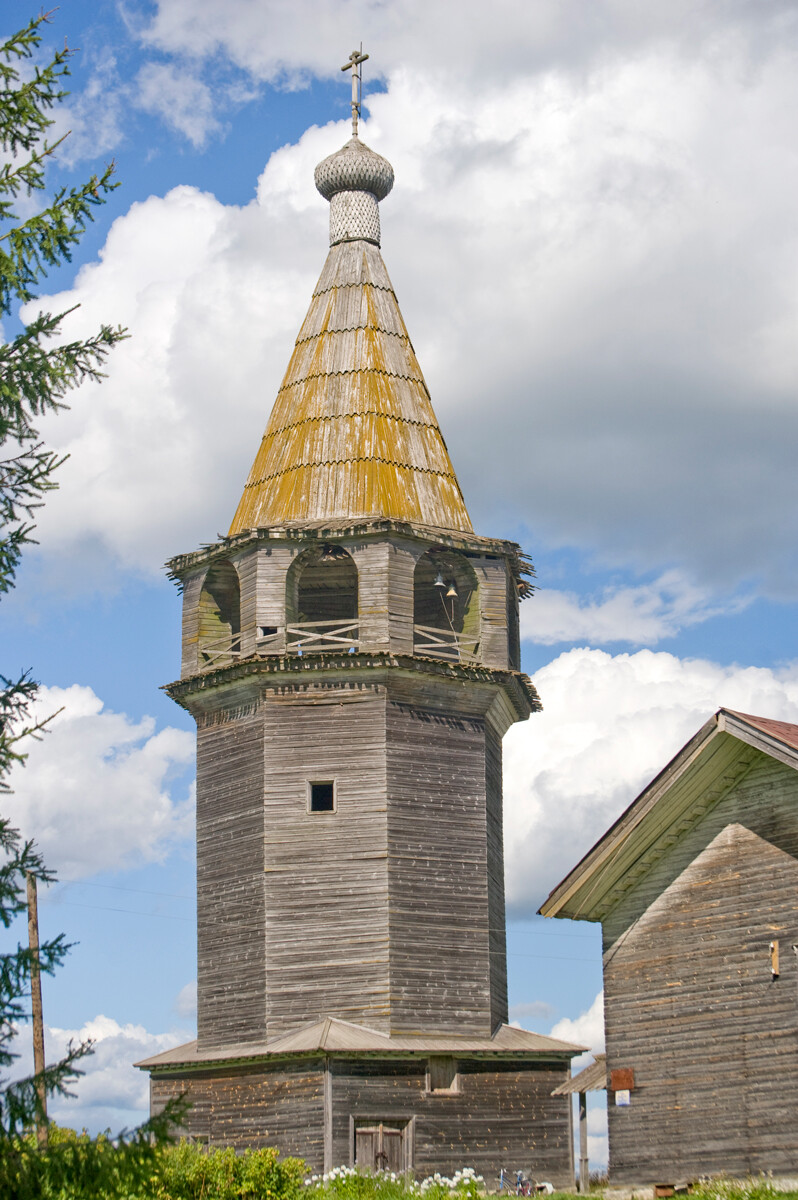 One of the most intriguing examples is the Church of the Epiphany at the village of Oshevensk in the Kargopol district of Arkhangelsk Province. Oshevensk is, in fact, a cluster of settlements, including three hamlets picturesquely situated along the Churyega River. The Epiphany Church is located in the first hamlet, Pogost, a name derived from a term for sacred ground that usually contained a cemetery and church. 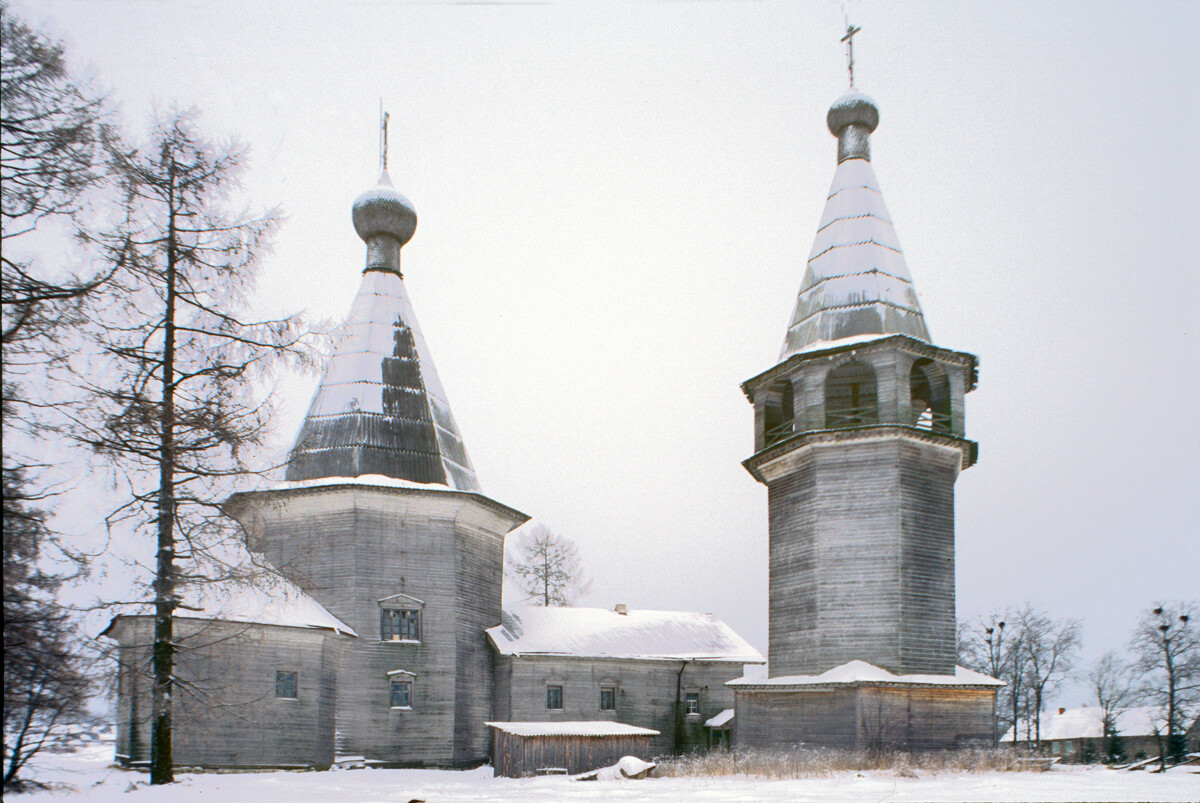 Built of sturdy pine logs in 1787, the Epiphany Church exemplifies the combination of structure and art in the Russian North (The church is also referred to locally as the Baptism Church since the Epiphany and the Baptism of Christ are the same Orthodox holiday). Octagonal in shape, the main structure of the church is crowned with a tall “tent” tower. The church bell tower stands separately to the northwest with its own vertical cap. The two complement each other with serene harmony. 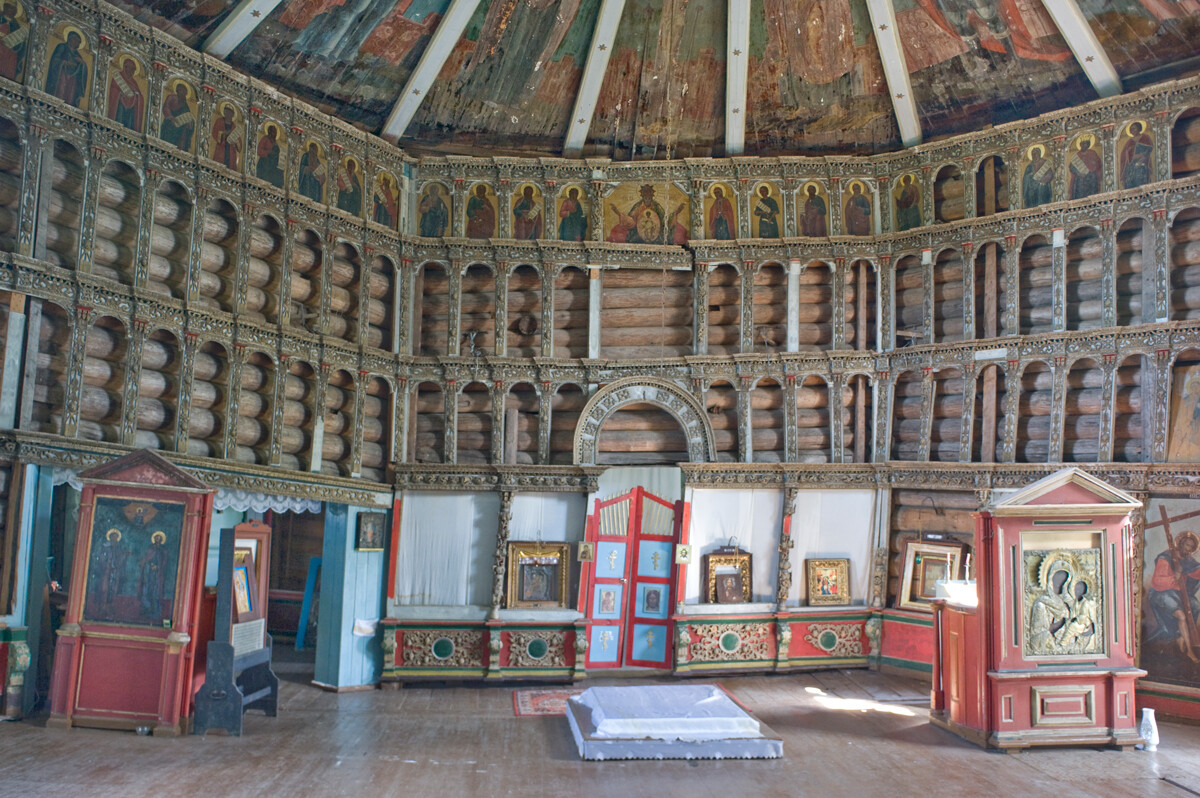 Oshevensk. Church of the Epiphany, interior. View east toward icon screen. Noticeable lean of floor caused by problems with base logs. August 14, 2014.

Yet, the miracle of this church is the interior, which encompasses one of the largest such spaces among northern log churches. Its icon screen is enormous, yet few of the icons remain. The church was closed in the 1930s, opened during the war and closed again in 1960, during Nikita Khrushchev’s “final” campaign against religion. The church was reopened for prayer and occasional services in the late 1990s. 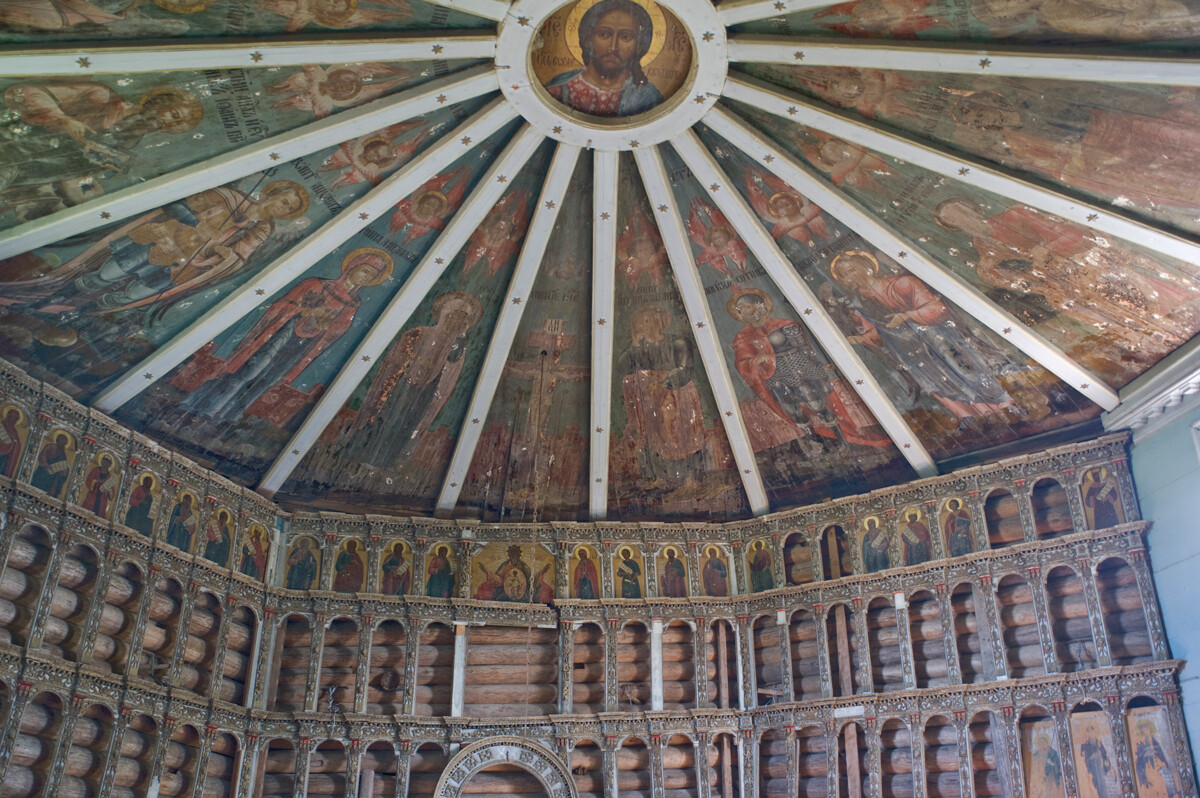 During this long period, most of the icons in the main iconostasis were taken from the church. Only the uppermost row, dedicated to the Prophets, still had icons, which are visible in my earlier photographs. But, in October 2014, the church was broken into and these remaining icons were stolen. Only the magnificent carved icon screen remained. Although most of the icons have now been recovered, much work remains to restore them to their original place. 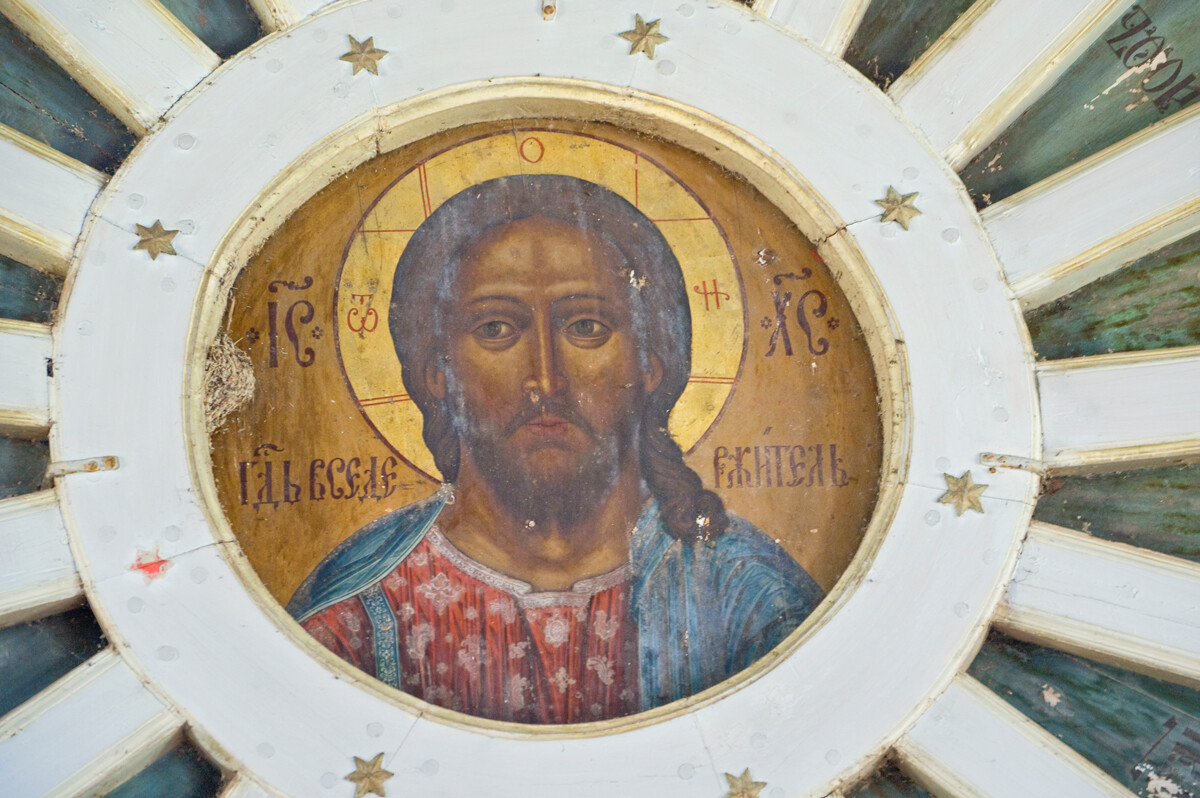 Oshevensk. Church of the Epiphany. Image of Christ Pantocrator (Ruler of All) at center of ceiling. August 14, 2014

The most impressive display of art on the interior is the painted suspended ceiling, or “heaven” (nebo), which still has its panels in place, although with sporadic damage to the painted surface. The basic form of the “heaven” is a polygon segmented by flat beams extending from the top of the walls to a ring in the center.

The ceiling beams are slightly inclined and thus create a frame that is self-supporting between the walls and the ring. The painted panels are in the shape of extended triangles and are laid upon the frame without fasteners. The design makes ingenious use of tension and gravity. 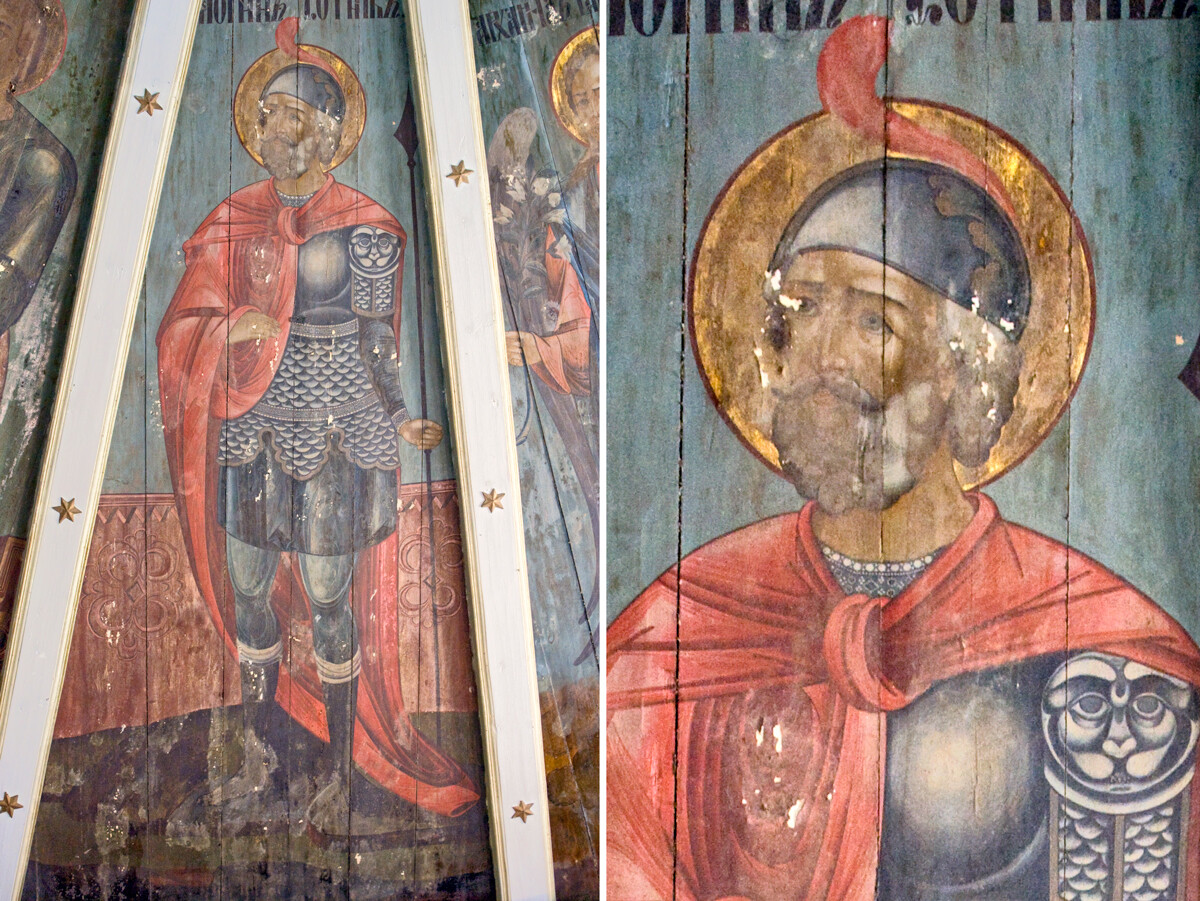 These “heavens” are a distinctive feature of the traditional North, a combination of painting and structure. The paintings at the Epiphany Church have been attributed to the Bogdanov-Karbatovsky family, one of the dynasties of icon painters active in the Arkhangelsk territory in the latter half of the 18th century. They were also involved in the painting of the icons for the monumental icon screen of the Kargopol Nativity Cathedral, rebuilt after a major fire in 1765. Such artists brought new expressiveness to a traditional art in transition from tempera colors to oil paints.

Archangels, evangelists & the Ruler of all 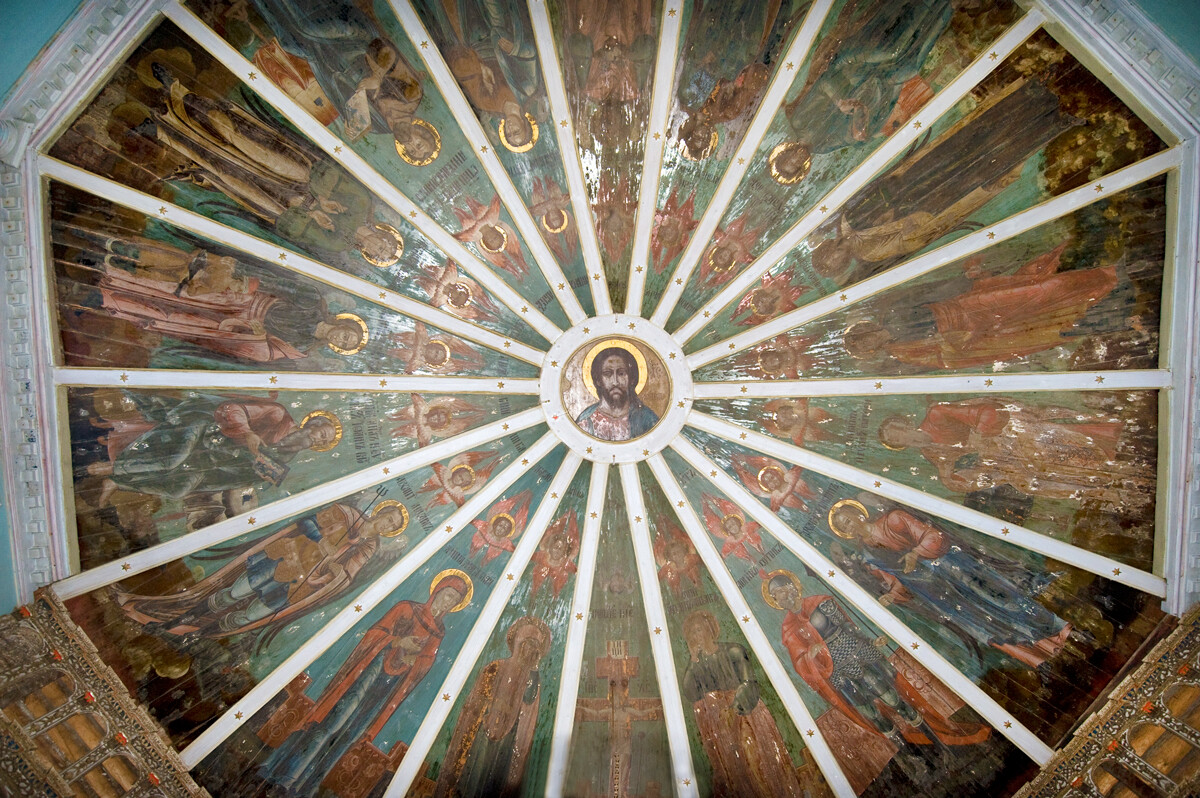 The “heaven” at the Epiphany church is uniquely large, with 18 panel segments that include eight archangels, the four evangelists, the Crucifixion and heavenly forms, such as seraphim. The central ring is occupied by an image of Christ Pantocrator (Ruler of All).

The panel rising from the center of the icon screen depicts Christ on the Cross. The panel to the right of Christ (the viewer’s left) contains Mary, Mother of God (Theotokos). The panel to the left of Christ depicts St. John the Evangelist, author of one of the canonical Gospels and, thus, a divinely inspired witness to the Crucifixion. Each panel of the entire ceiling has the name painted in bold black letters. 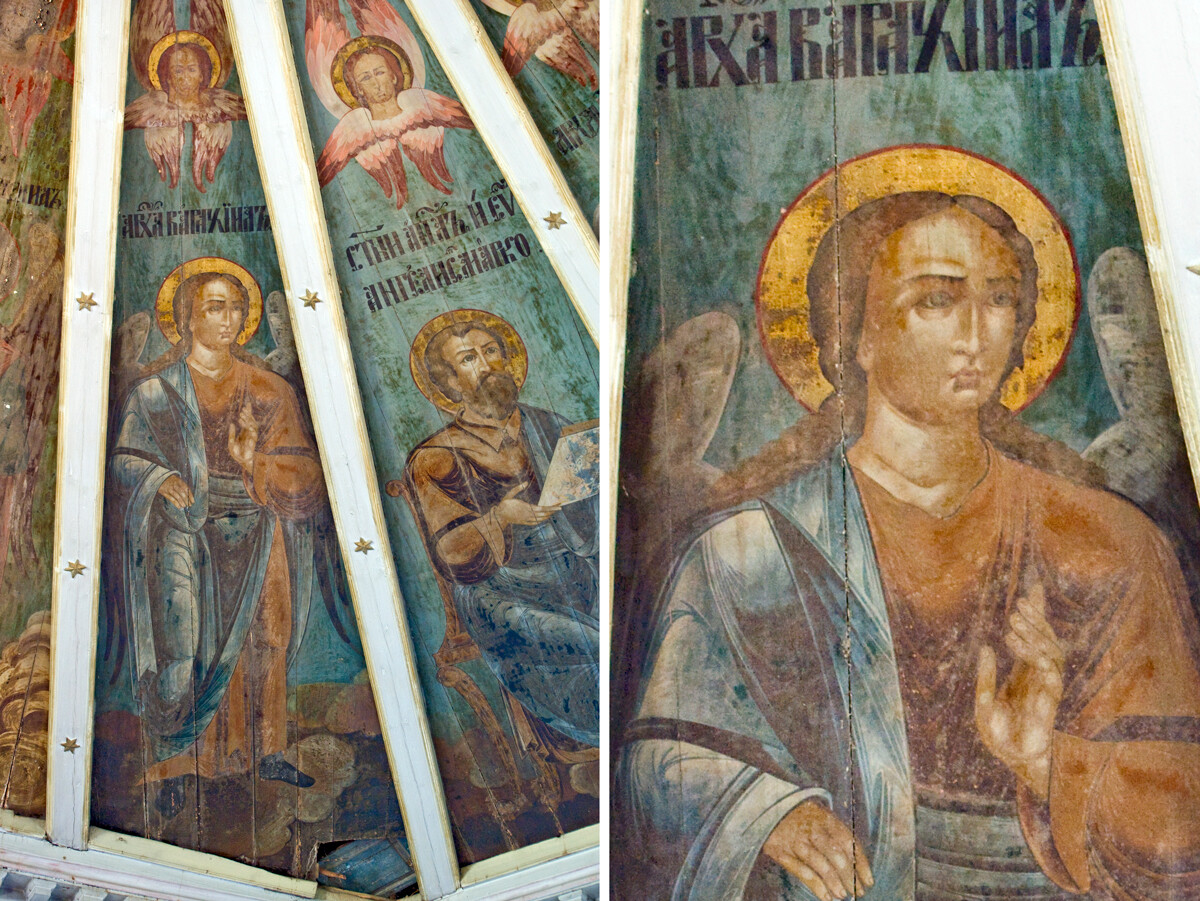 Next to Mary Theotokos stands Mary Magdalene. As a close follower of Jesus, she is mentioned several times in the Gospels and stood at the foot of the cross. She also appears in all four Gospels as a central person in the Resurrection narrative. Although both figures are depicted in blue robes symbolizing purity, Mary Magdalene is also clad in a crimson cloak.

St. John the Divine is flanked by Longinus the Centurion, the name given in medieval Christian sources to the Roman soldier who pierced the side of Christ with his spear. Longinus was canonized by both the western and eastern churches for his witness to and proclamation of the divinity of Christ. The bright red cloak that he wears over his armor creates symmetry with the cloak of Mary Magdalene. 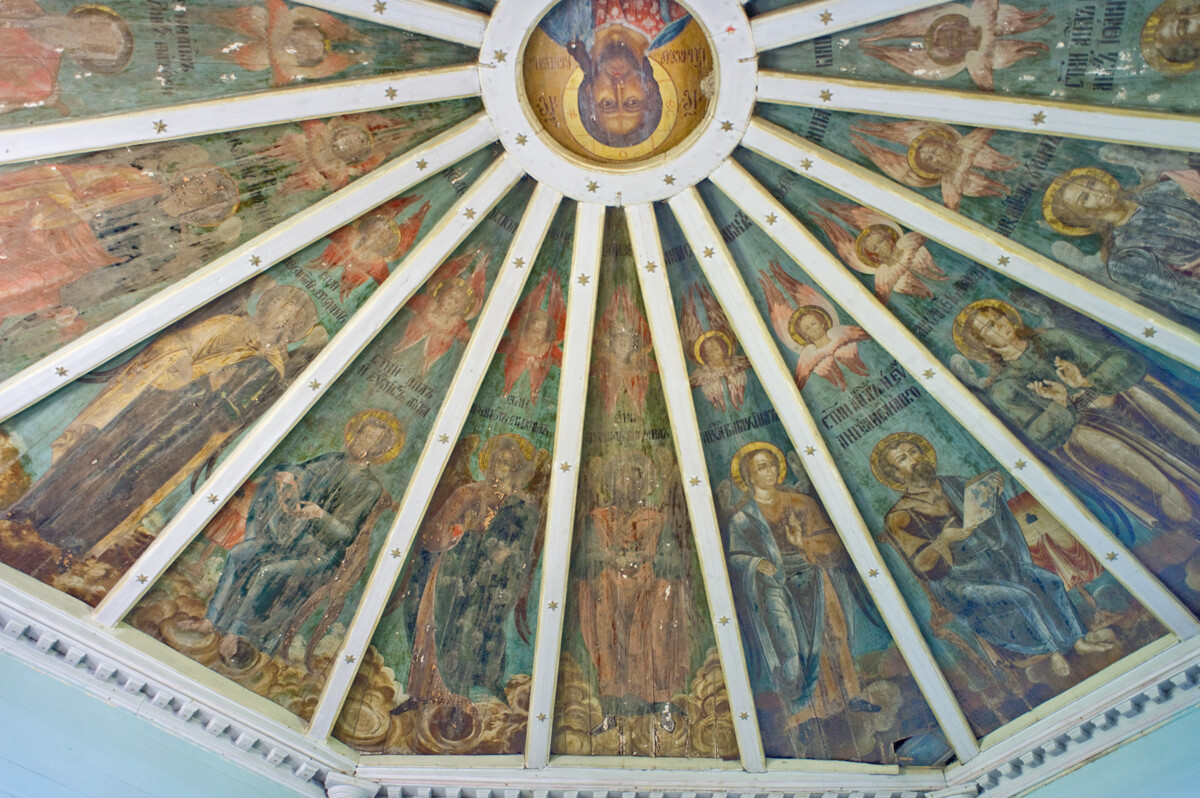 This arrangement of five central figures, typical for Orthodox depictions of the Crucifixion, is flanked by panels containing the two main archangels, Michael (in the panel next to Mary Magdalene) and Gabriel. As the supreme archangel (arkhistratig), Michael leads the Hosts of the Lord against Satan’s array in the Book of Revelation. As a symbol of his militant power, he is portrayed in armor with a red cloak. His right hand holds a lance, here given the atypical form of a trident. Gabriel, portrayed more modestly, is God’s primary messenger, most notably in the Annunciation. 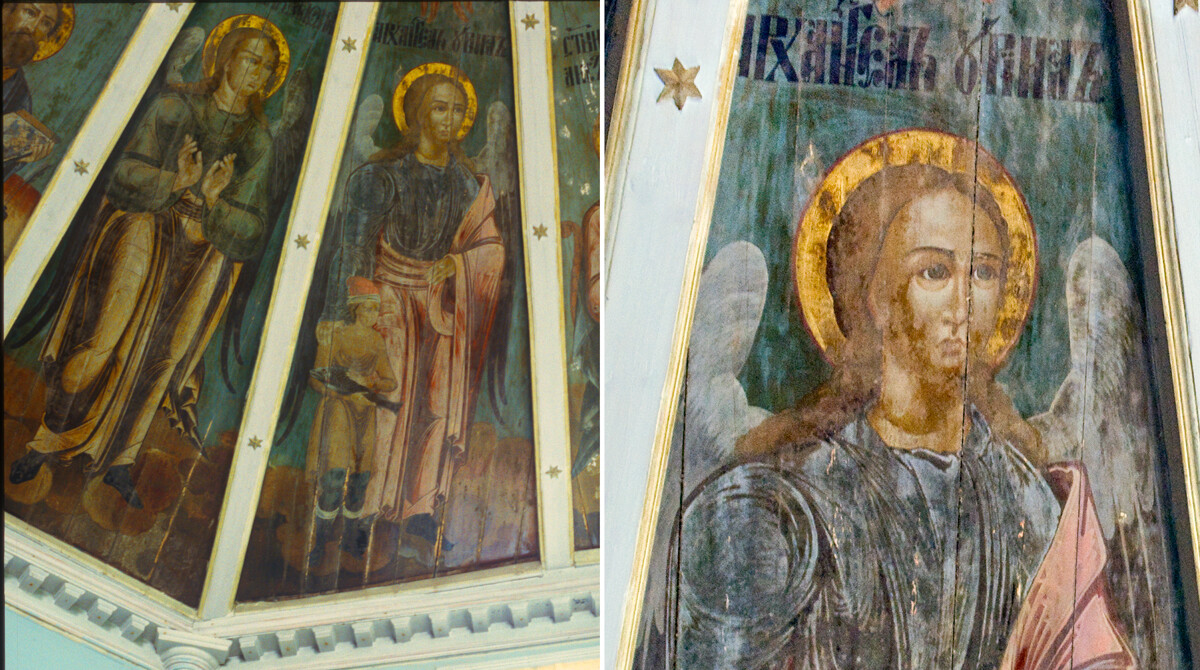 The eastern half of the ceiling concludes with portrayals of the Evangelists Matthew (in the panel next to Archangel Gabriel) and John the Divine. This is the second representation of St. John: first as a witness to the Crucifixion and secondly as one of the four Evangelists. 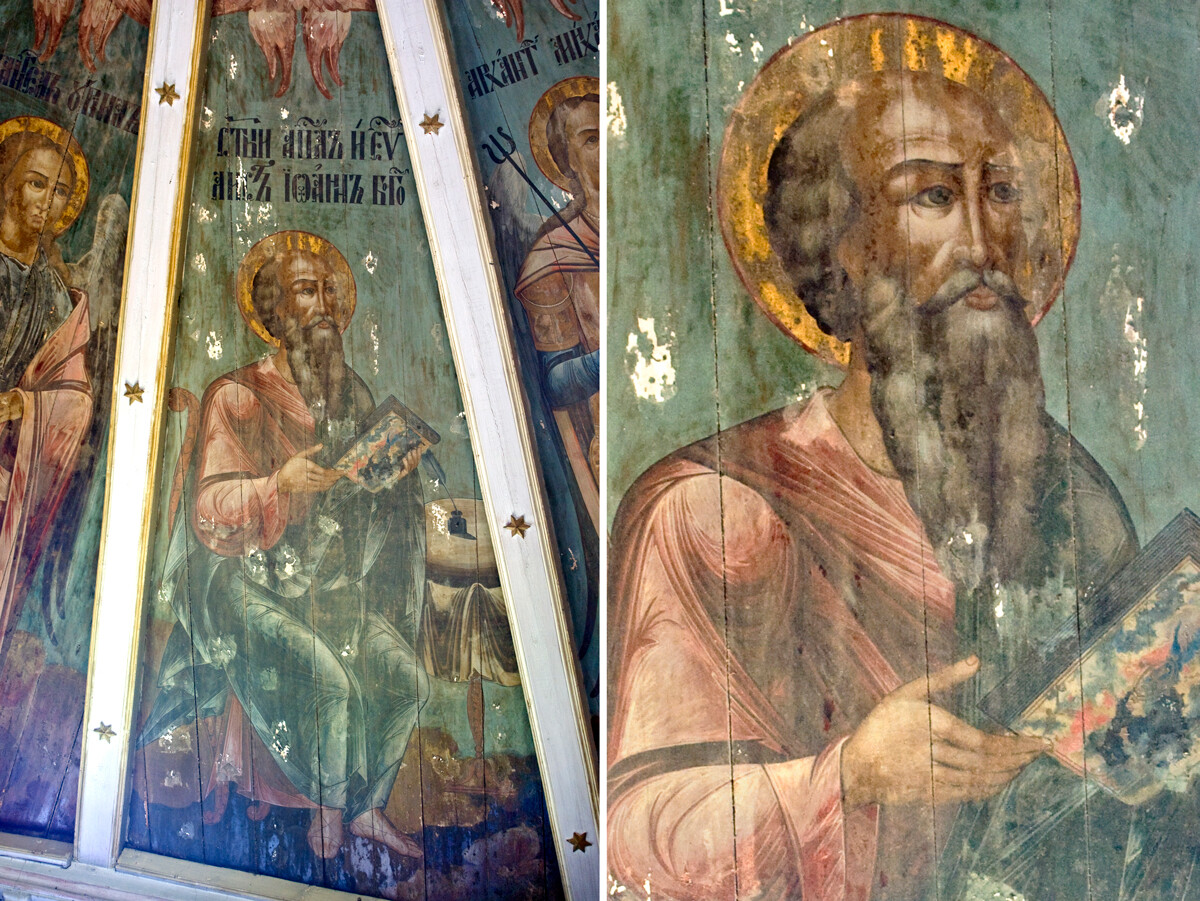 The western half of the nebo continues with the other archangels in the Eastern Orthodox tradition, such as Selaphiel, who is often seen as an intercessor between God and the worshiper. Next to Selaphiel is Archangel Uriel, traditionally associated with various human endeavors, such as the arts. Here, Uriel is portrayed accompanying the boy Tobias, son of Tobit from the Book of Tobit. The boy holds a fish that he caught and that will subsequently play a role in the narrative of this complex legend. Usually, it is Archangel Raphael (the healer) who accompanies Tobias, but the letters on the panel clearly spell “Uriel”. 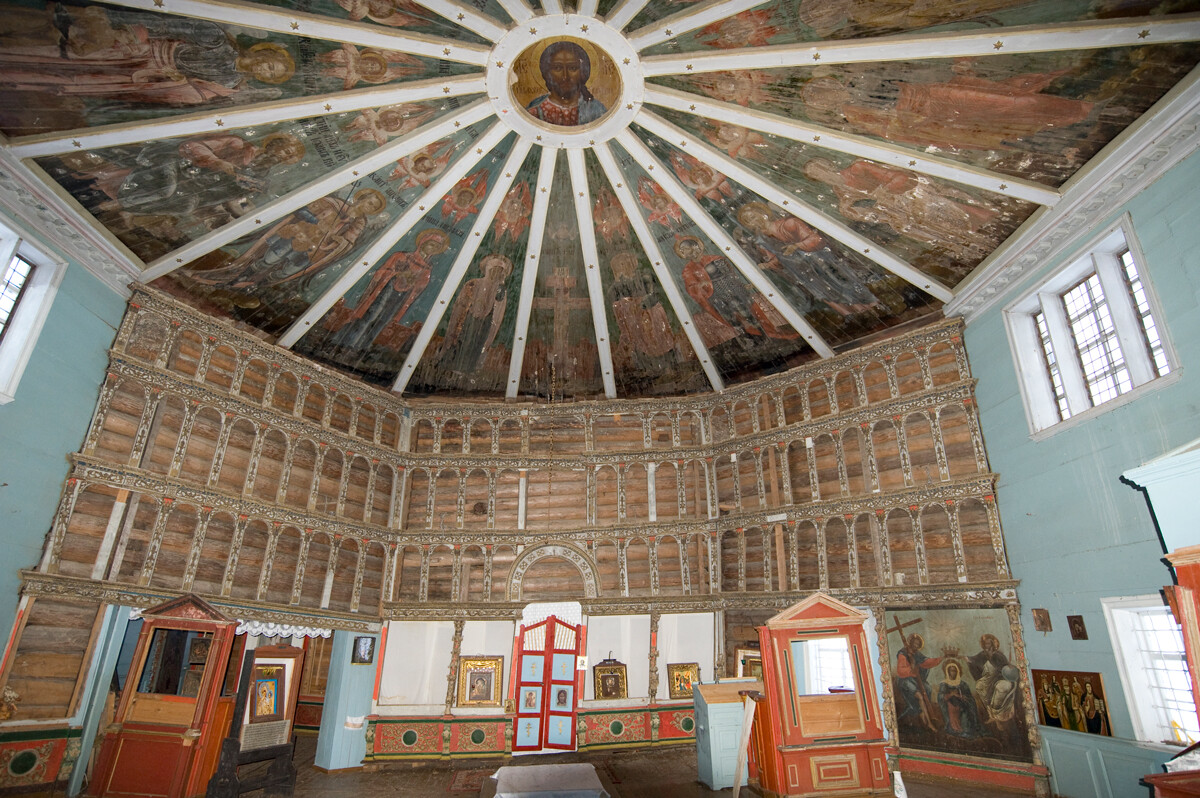 Also included among the western panels are the Evangelists Mark and Luke, as well as Archangel Jegudiel. The central part of the western half of the nebo consists of three panels with archangels Barachiel, Selaphiel and Michael. This is the second depiction of Archangels Selaphiel and Michael, a repetition called forth by the unusually large number of panels in the Epiphany Church ceiling.

In addition to the main altar (behind the icon screen), the Epiphany Church has two additional altars dedicated to St. John the Divine and the martyr St. Vlasy (Blaise) that have miniature versions of the “heaven” painted ceilings. For heated winter worship in this severe climate, a refectory with the altar of St. John the Divine extends from the west of the main structure. 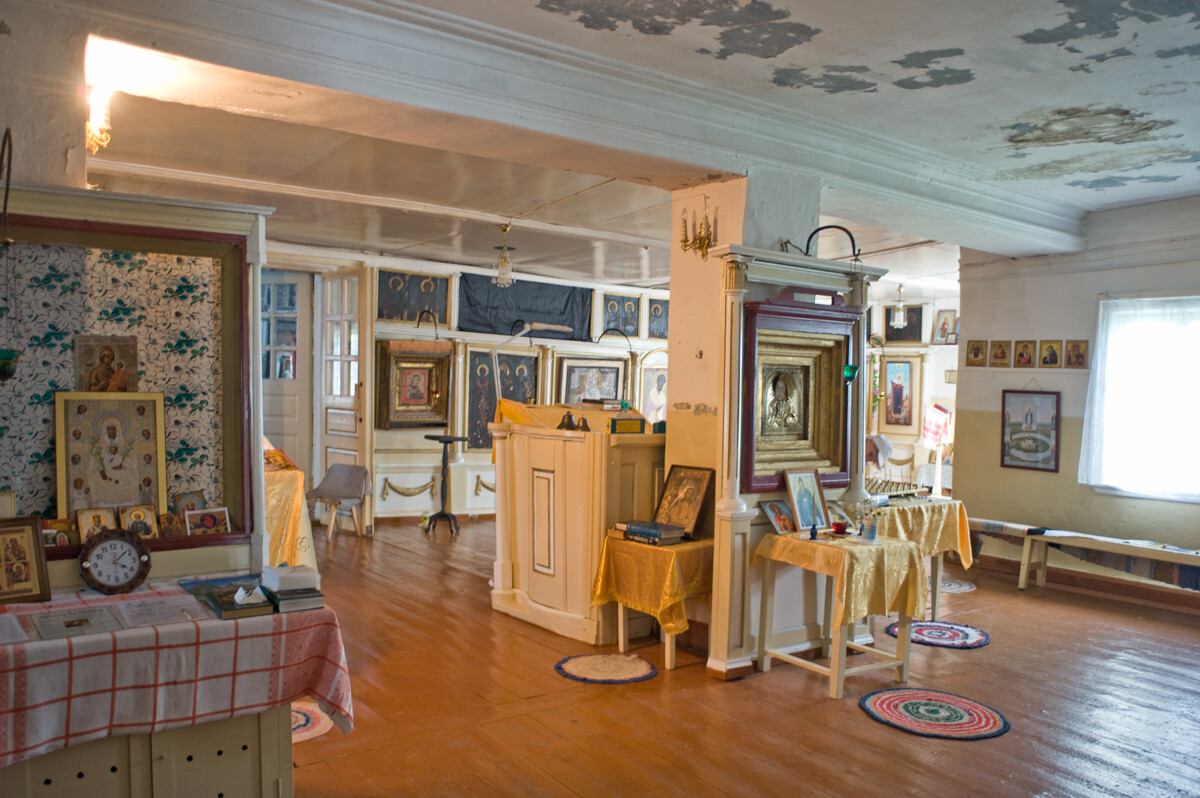 Church of the Epiphany, interior of refectory (vestibule). View southeast toward chapel of St. Blaise. August 14, 2014

Despite their remote location, the miraculous paintings at the Oshevensk Epiphany Church must be carefully maintained. Valuable in themselves, they also suggest a continuity in Russian art extending to the major 20th-century artist Natalya Goncharova - for example, her work entitled: ‘The Four Evangelists’. Each art form displays clarity and depth of expression, fluidity of line, delicate shading and a radiant expressiveness. 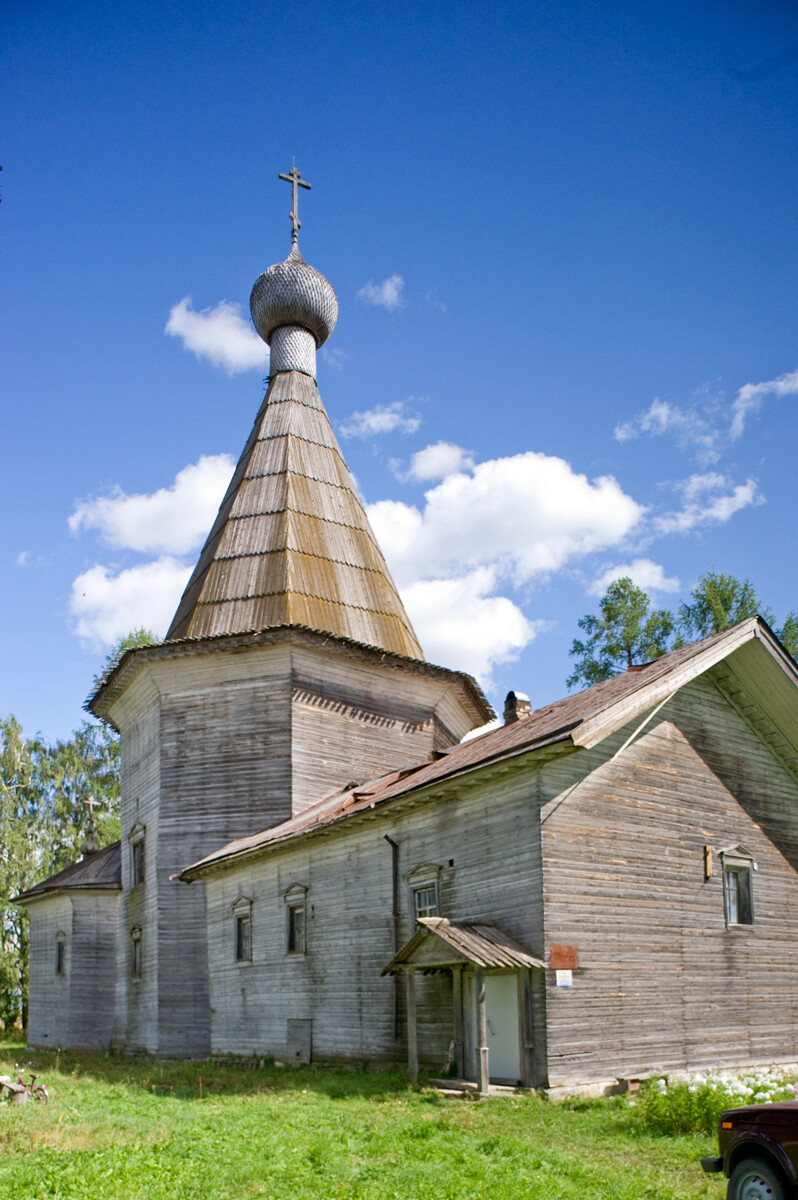