What the homeland of Russian crystal looks like (PHOTOS) 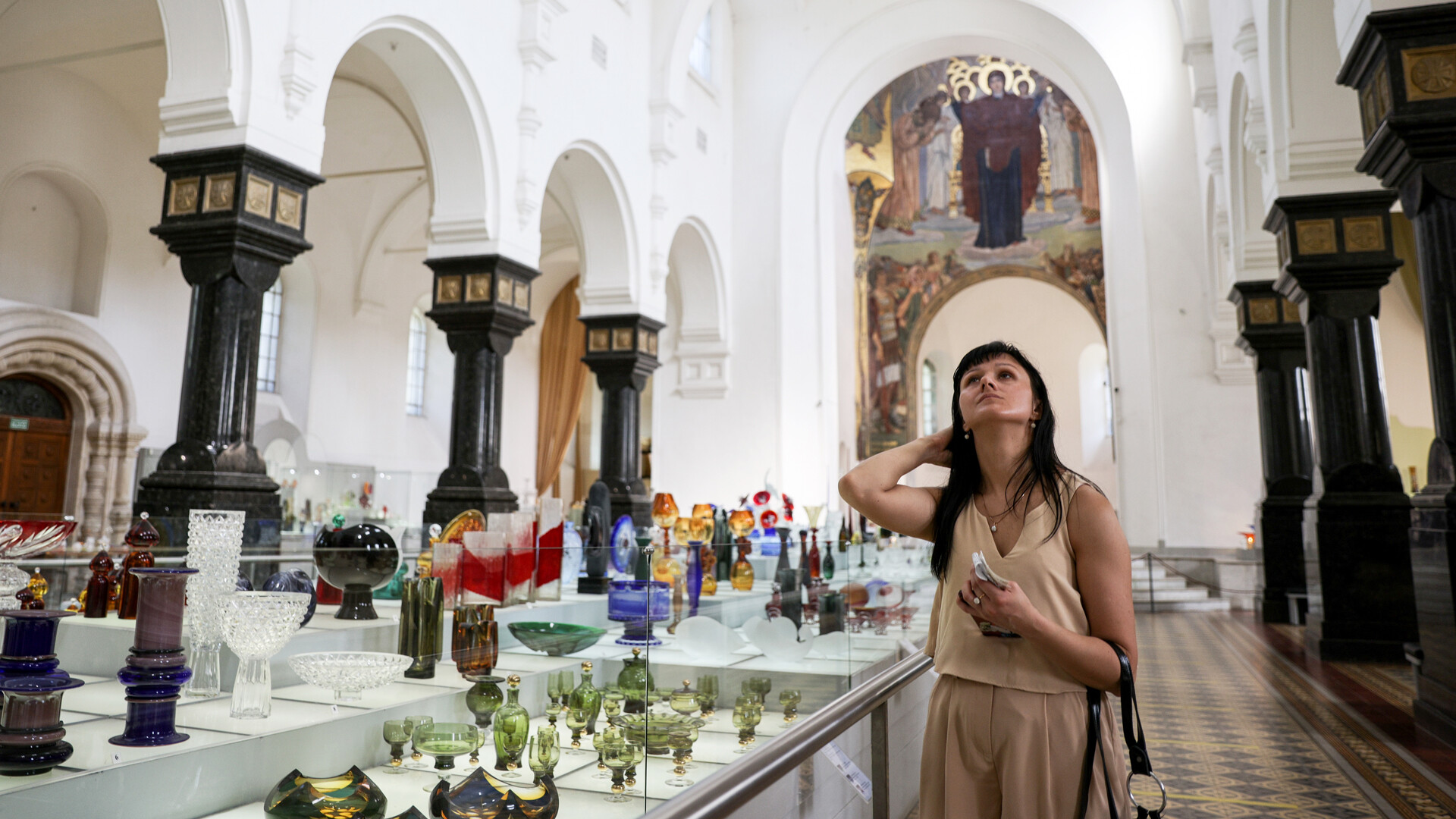 Sergei Bobylev/TASS
Everything in the town of Gus-Khrustalny is about crystal: the major plant, the central market and even the church. 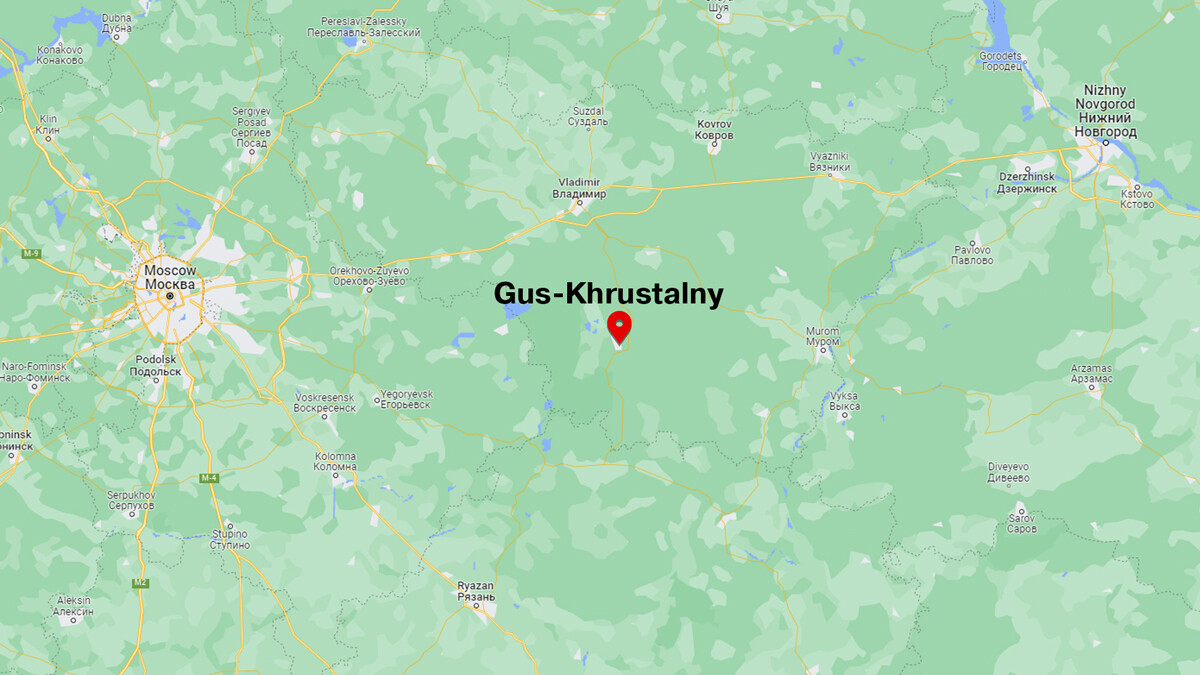 Crystal has always been on the wishlist of every Soviet family: it was very expensive and considered something of a luxury. And it is still treasured by many families. The most desired in Russia was crystal from the town of Gus-Khrustalny (current pop. 60,000) - they have been making arty glasses, decanters and vases for over 250 years! Let’s see how “crystal tourism” is managed there.

Why Russian crystal is so famous 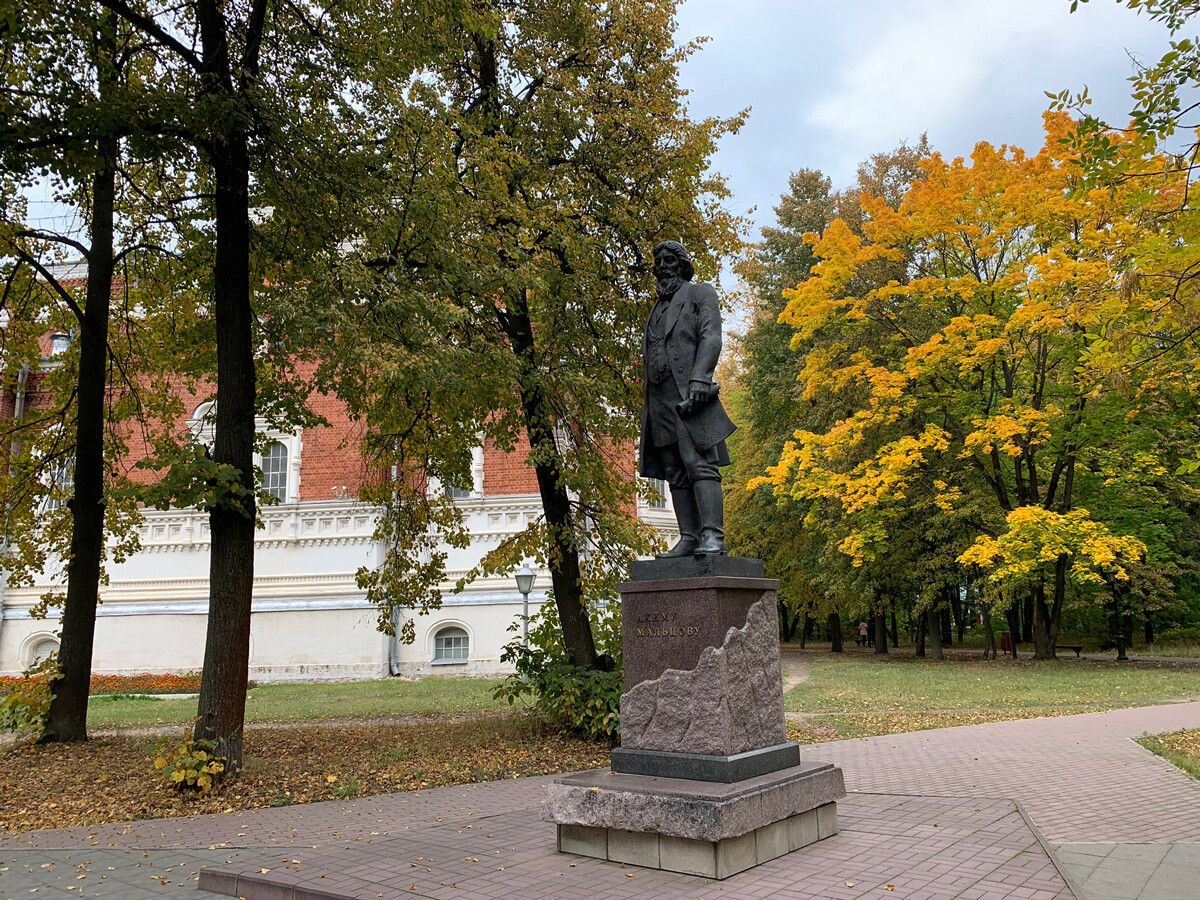 A monument to Akim Maltsov.

In 1756, industrialist Akim Maltsov built a glass factory on the bank of the River Gus. There was plenty of sand, water and wood needed for manufacturing, as well as a good location near the Golden Ring towns. His offspring continued the business afterwards. 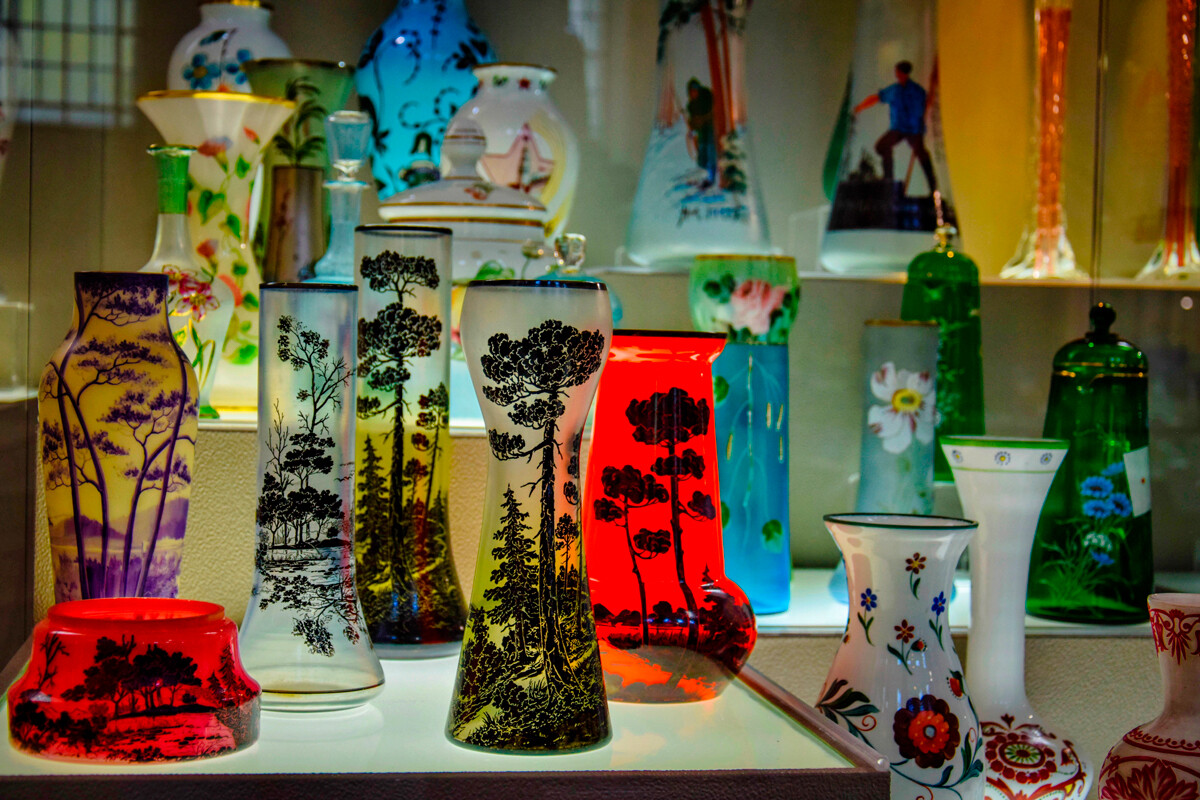 Gus’ crystal became famous globally in the mid-19th century, however, after a tragic event. In 1828, factory owner Ivan Maltsov (grandson of Akim Maltsov) served in the Russian diplomatic mission in Persia, which was headed by writer Alexander Griboyedov. And he was the only survivor after the diplomats were assassinated. The Shah of Persia, as an apology, granted Maltsov the right to duty-free trade of crystal and soon the Gus glassware expanded to other countries and gained international fame. 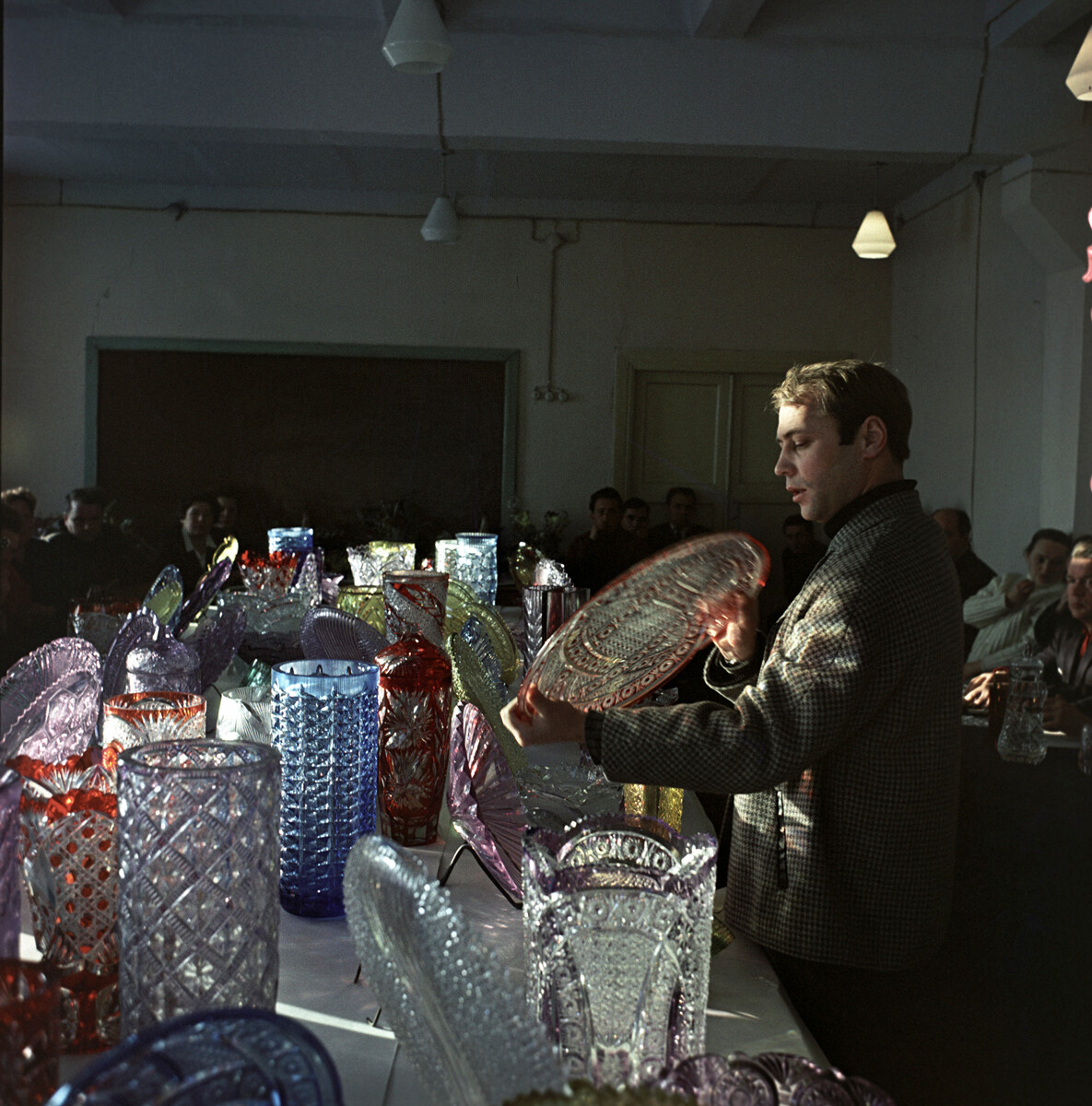 The factory during the Soviet times.

During Soviet times, the plant in Gus-Khrustalny was nationalized, but still remained the main enterprise of the town, producing glass and crystal 24/7. Anyone can come here for a tour to witness it for themselves.

See the birth of crystal 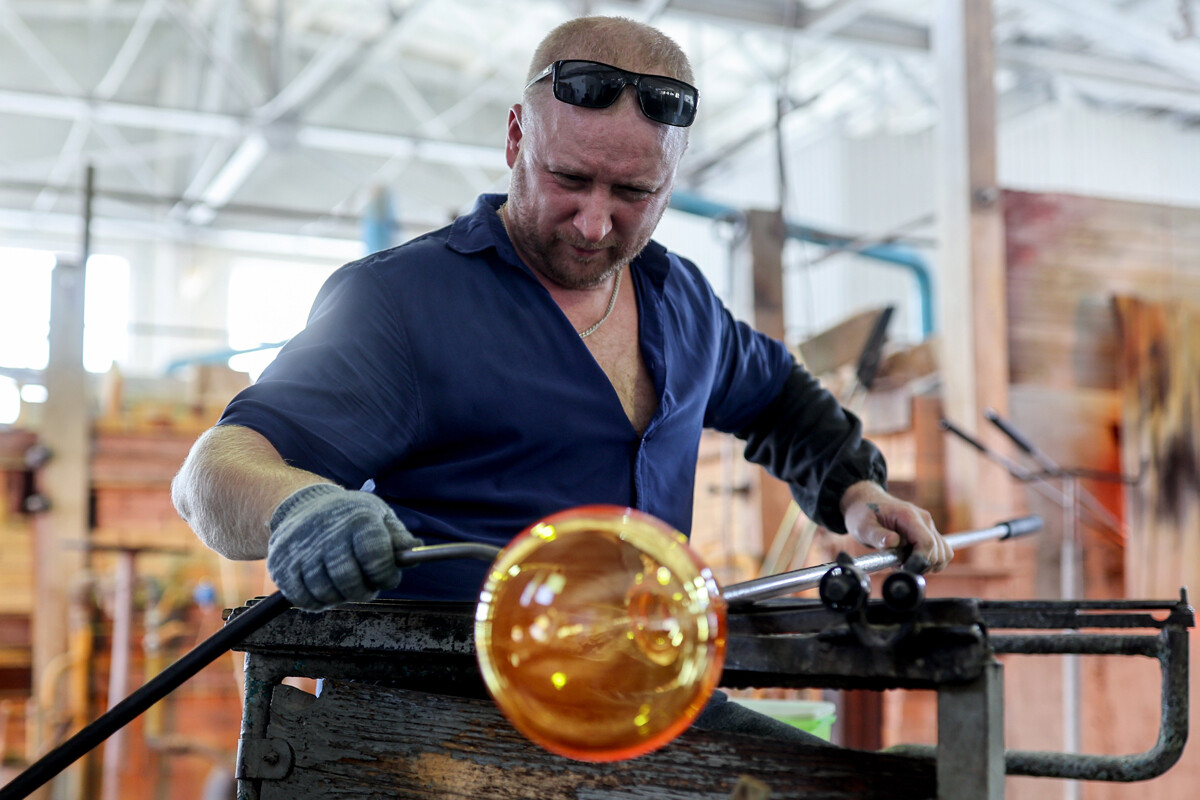 Today, the crystal plant employs about a hundred people, including designers, craftsmen and polishers. Their work is incredibly physically hard.

All these vases and decanters are blown with a metal tube at a temperature of 1,250 degrees Celsius. Just imagine the heat in the stoves! And while the crystal remains flexible, craftsmen use their instruments to turn it into the needed form. 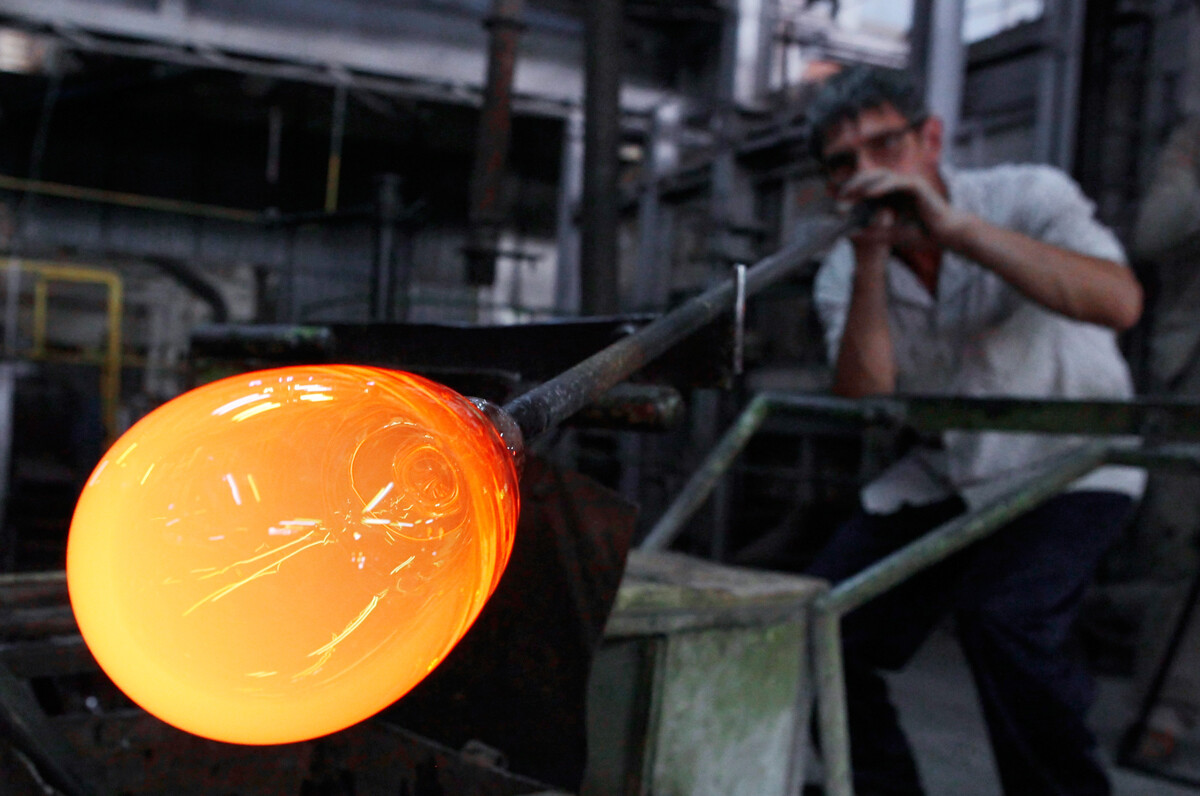 Individual pieces - souvenir figurines of horses or flowers - are “baked” in special molds. Then the item is sent for firing and polishing.

Other artisans mark the facets, the future drawing and proceed to the final work. 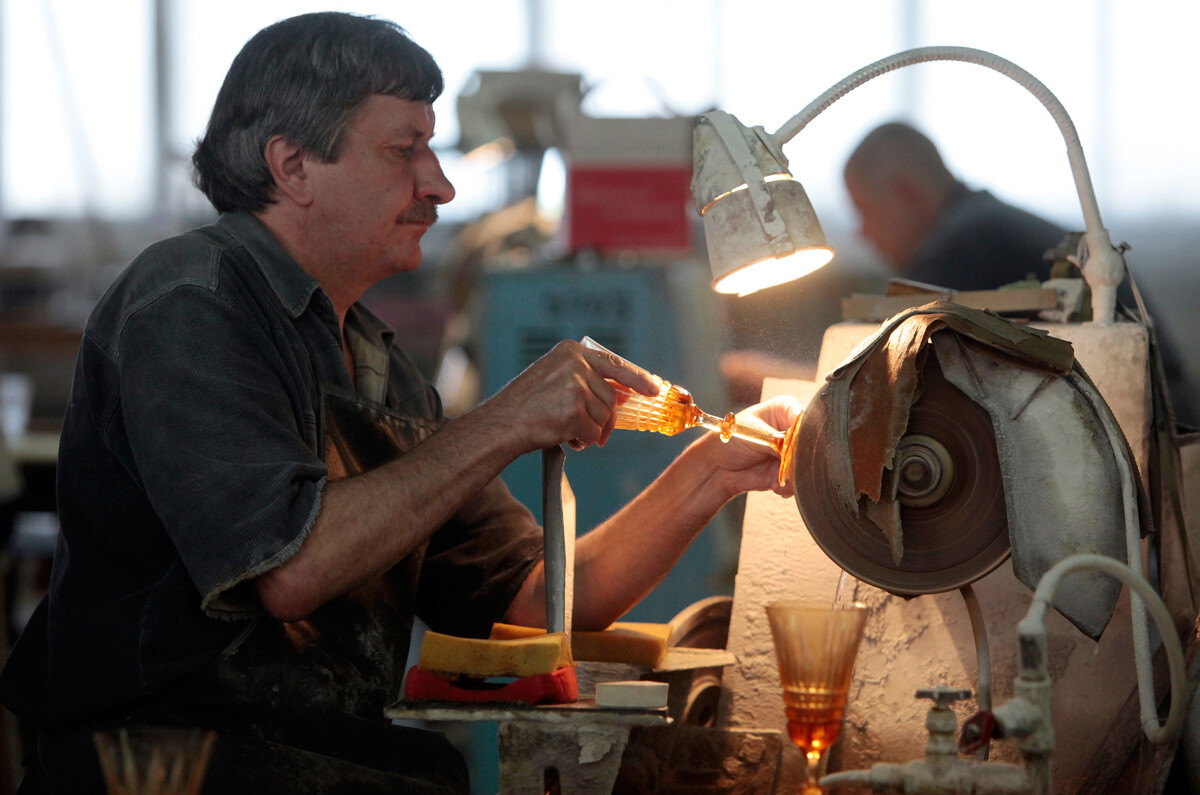 “Here, we prepare masters right on the workplace, but there’s no turnover, they don’t even want to retire,” says the plant’s tour guide. 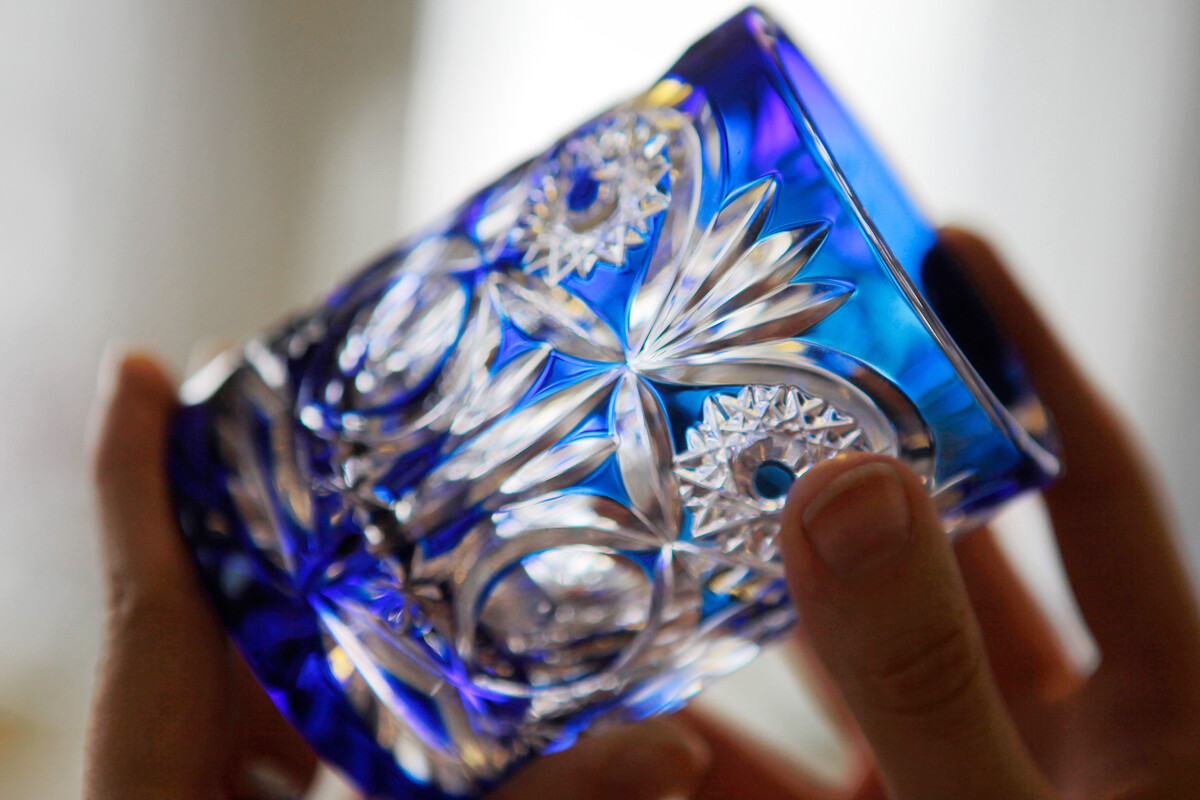 To obtain a tinted object, they add different chemical elements to the glass pulp, which act as dyes. Blue is cobalt, purple is manganese, red is selenium and lilac is neodymium. The most expensive items are pink, because they contain the rare-earth element erbium. 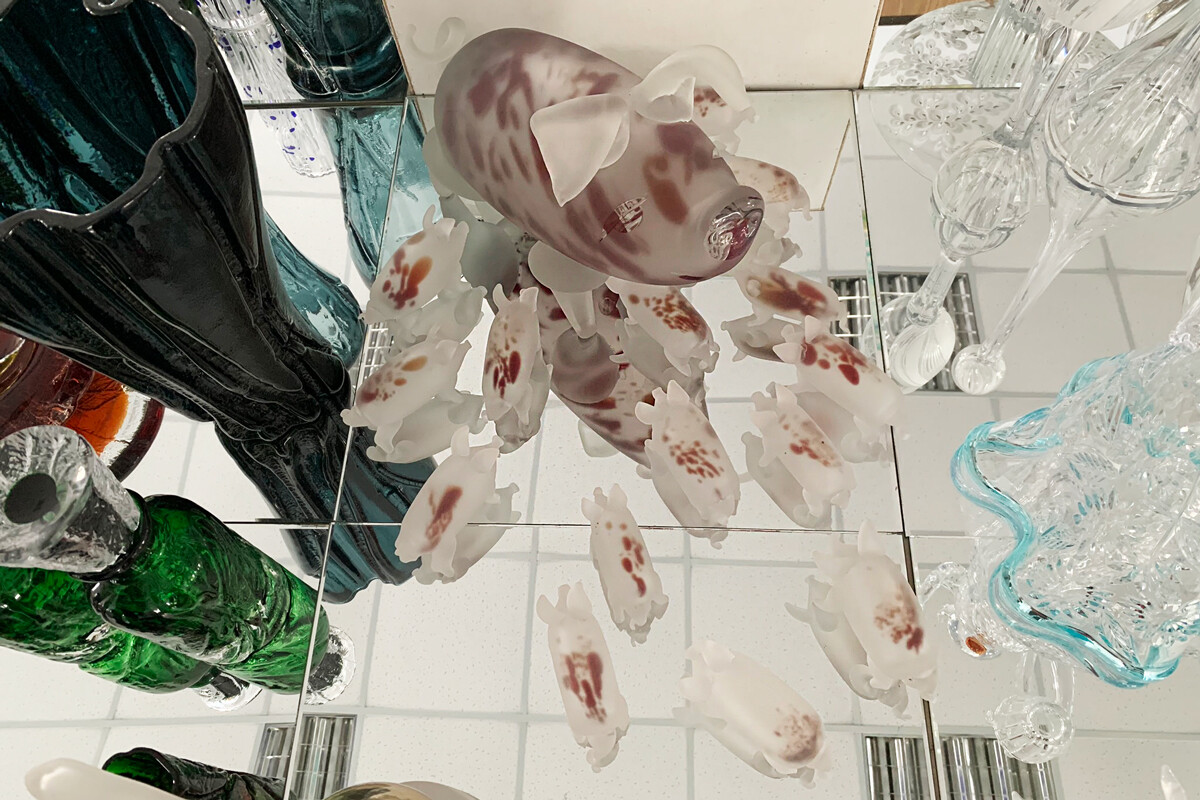 The plant makes items both in series and to order. The most original works are on display in the plant’s museum: among them is a sow with 15 piglets, a cow in a sarafan, kokoshniks and many other curiosities. Of course, all this can not fit in one small room. So, most Gus crystal from different epochs is exhibited - and this is really unique - in a nearby church. 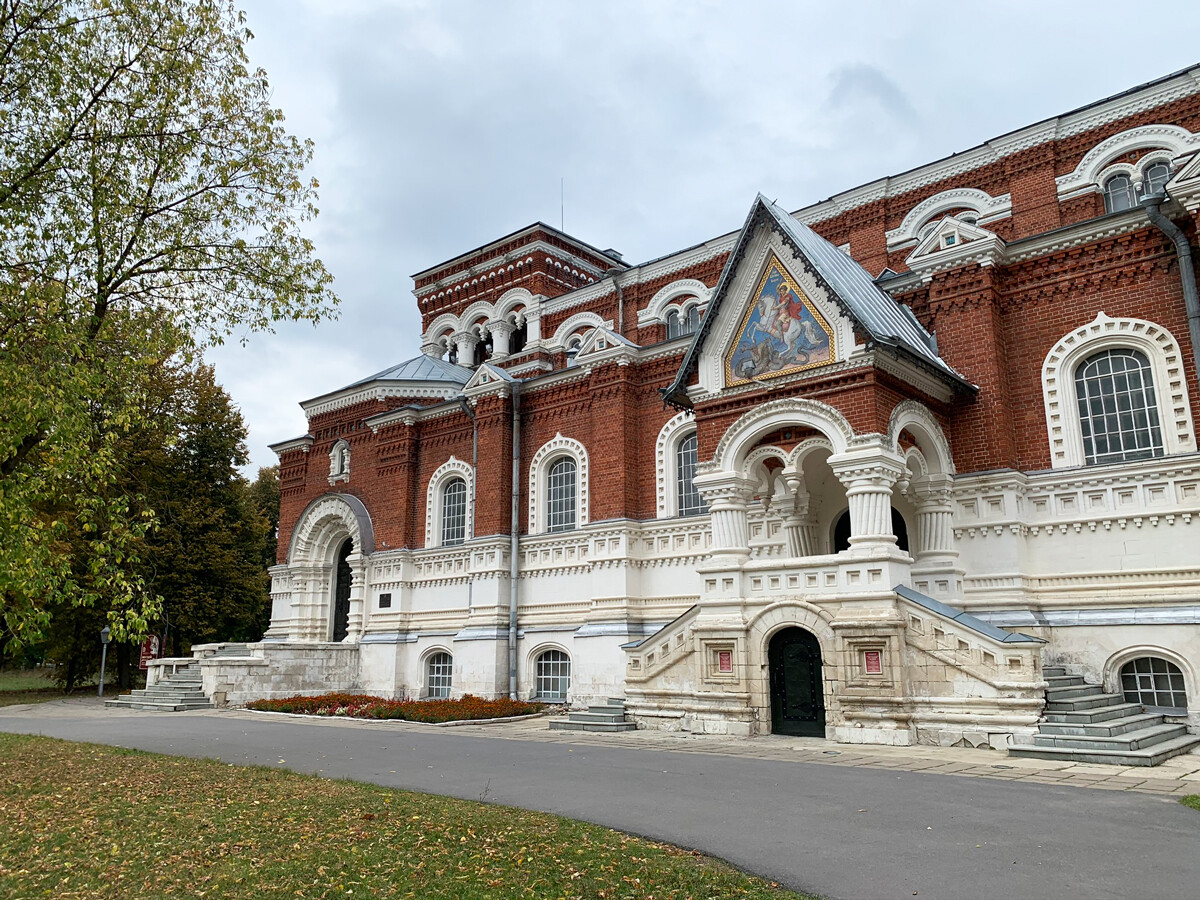 The Museum of chrystal.

First, it’s difficult to believe that this majestic red-brick building is actually an Orthodox church. Where are the domes? Where is the bell tower? It had all these attributes a century ago. In the 1890s, factory owner Yuri Nechaev-Maltsov decided to build an Orthodox church next to the plant, which would resemble a European basilica in form, but would be designed in the Russian style. The project was developed by architect Leon Benois and artist Viktor Vasnetsov. 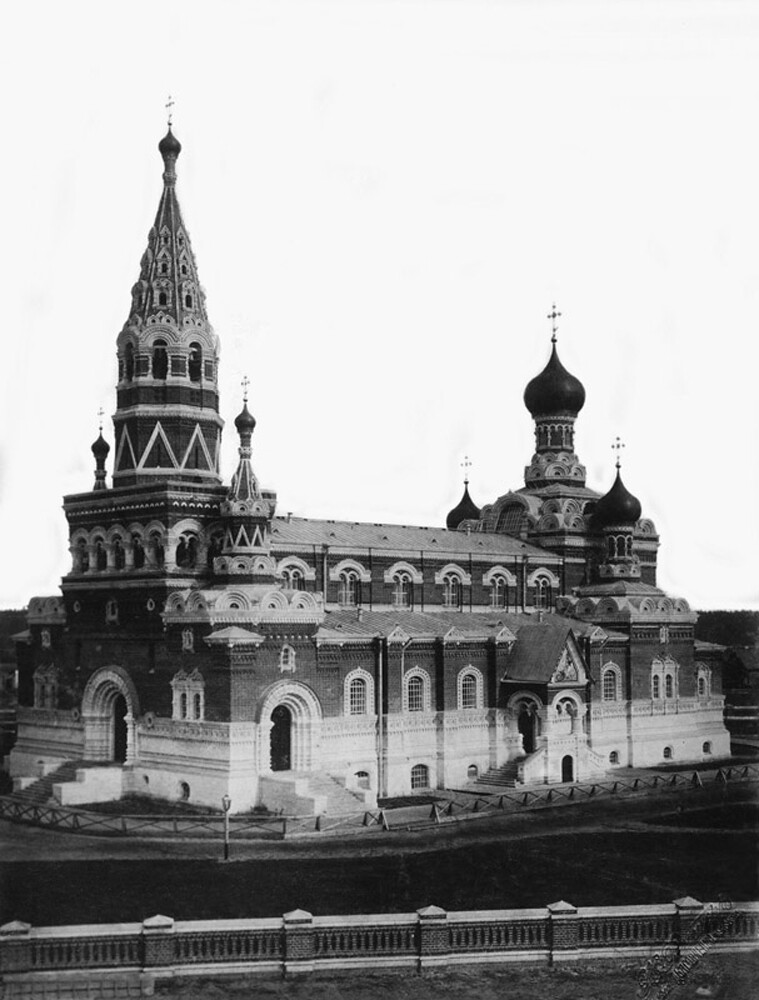 The St. George’s Cathedral received a basilica-like interior, a traditional Russian bell tower and neo-Russian architecture, becoming similar to the chambers. In the mid-1920s, the Bolsheviks turned the cathedral into a cinema, while the bell tower, the domes, the altar and other religious attributes were all removed. In 1983, it was decided to house a museum there, as the plant’s could not hold all the exhibits. 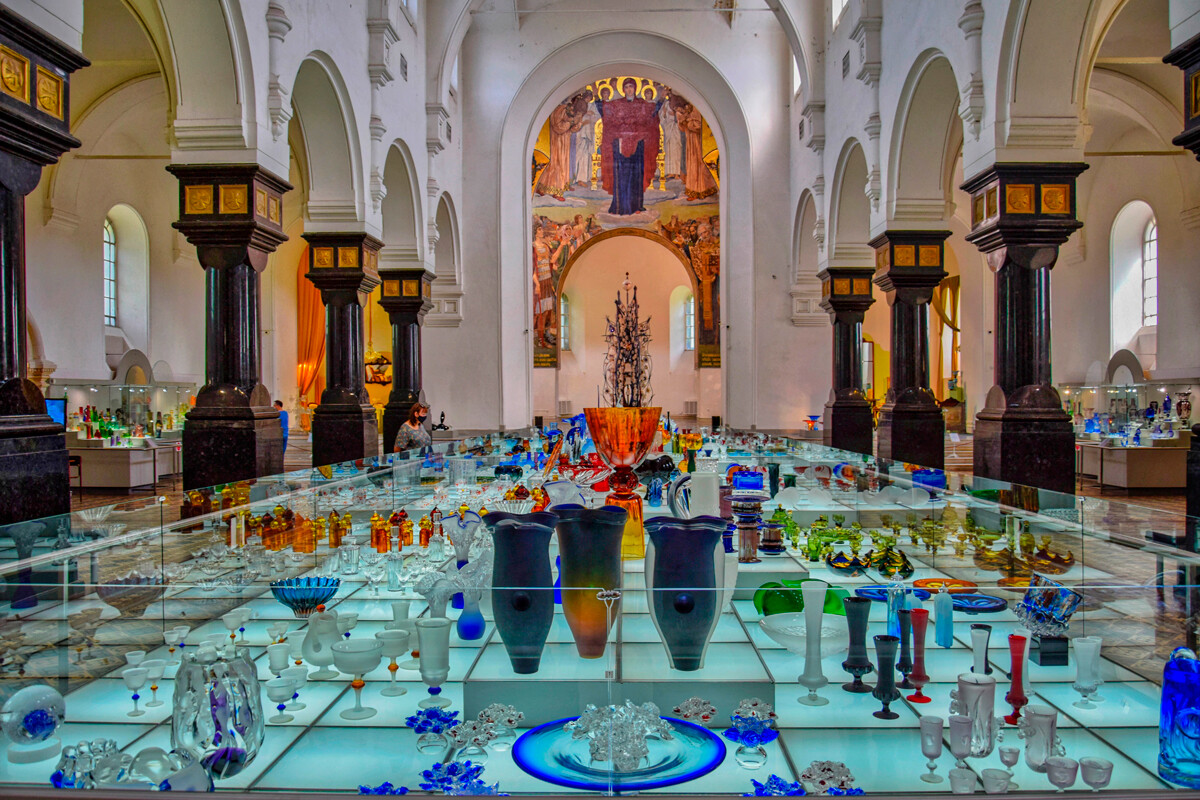 Thus, the Orthodox cathedral was turned into a temple of crystal. Nevertheless, a mosaic in the altar area, a painting by Vasnetsov ‘The Last Judgment’ and one of the 12 crystal chandeliers made there have survived.

Today, there are more than 2,000 unique examples of glass and crystal. There are vases that Gus-Khrustalny once sent to Persia, agit crystal with Bolshevik mottos, as well as creative pieces of modern craftsmanship. 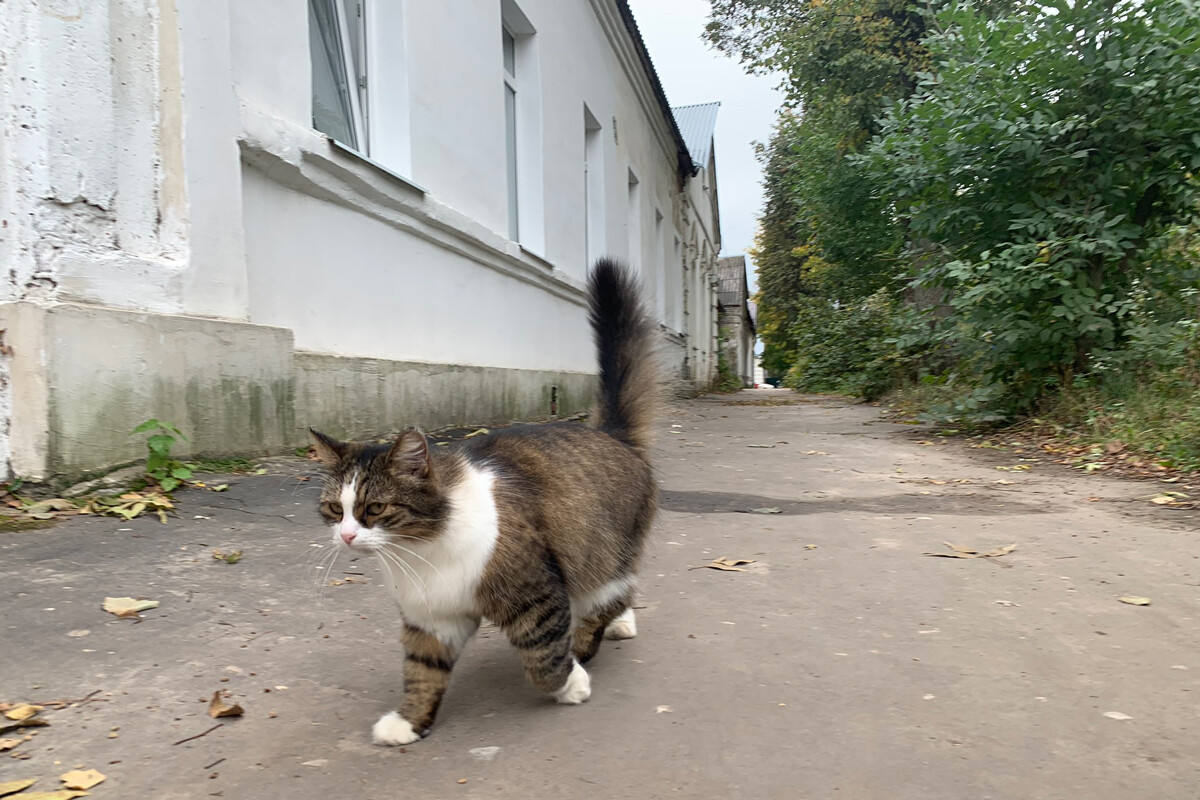 The work at the plant was very hard, but the Maltsevs offered, as we would say now, an impressive benefit package. The most important was a whole apartment in a new brick house with all amenities. Such offers and living conditions were almost impossible for an ordinary worker at the time. In total, 425 such houses were built in the latter half of the 19th century, but only 247 have survived to this day. All of them are recognized as objects of the cultural heritage of the city - and landmarks. 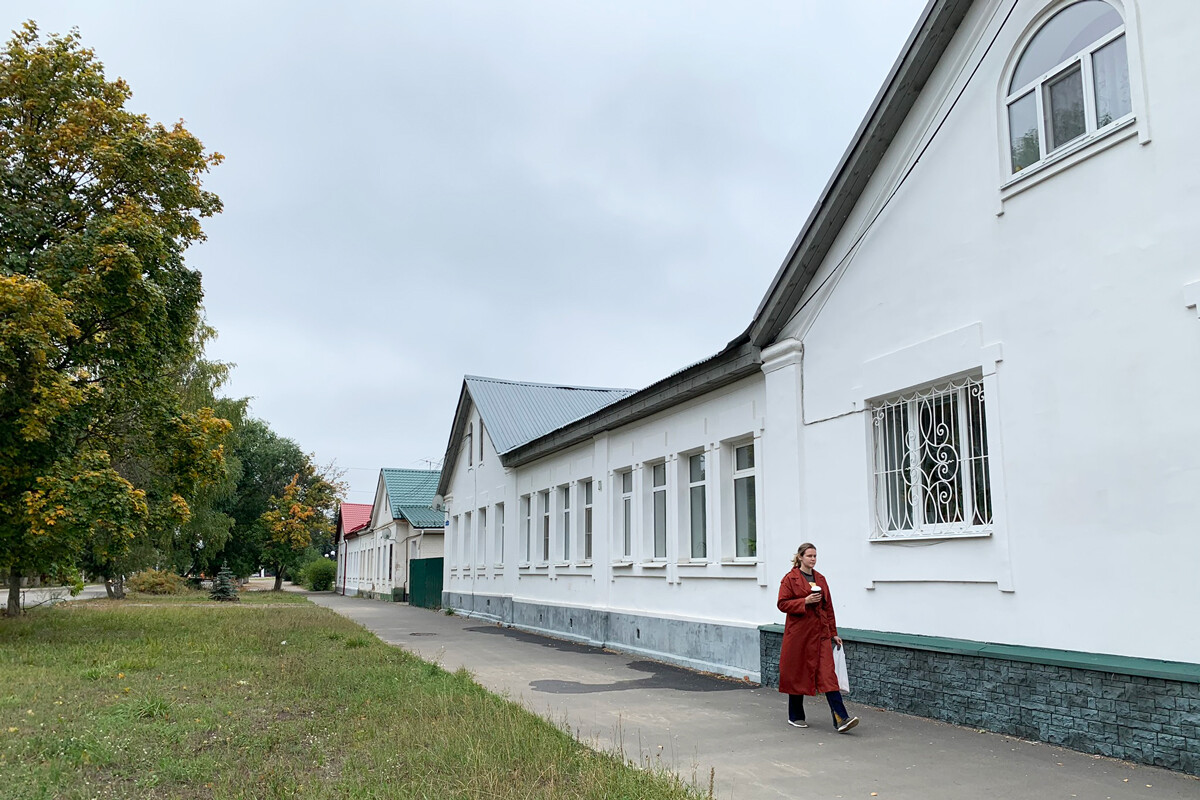 Each house is divided into several apartments and the owners also have a small yard. “For example, our house has only seven apartments, each has its own heating,” says a local woman. However, it is prohibited to rebuild such houses: the owners are obliged to monitor the condition of these monuments of architecture. But, apartments there are on sale very rarely and, if they appear, they are instantly sold out. That’s because many people want to live in such houses. 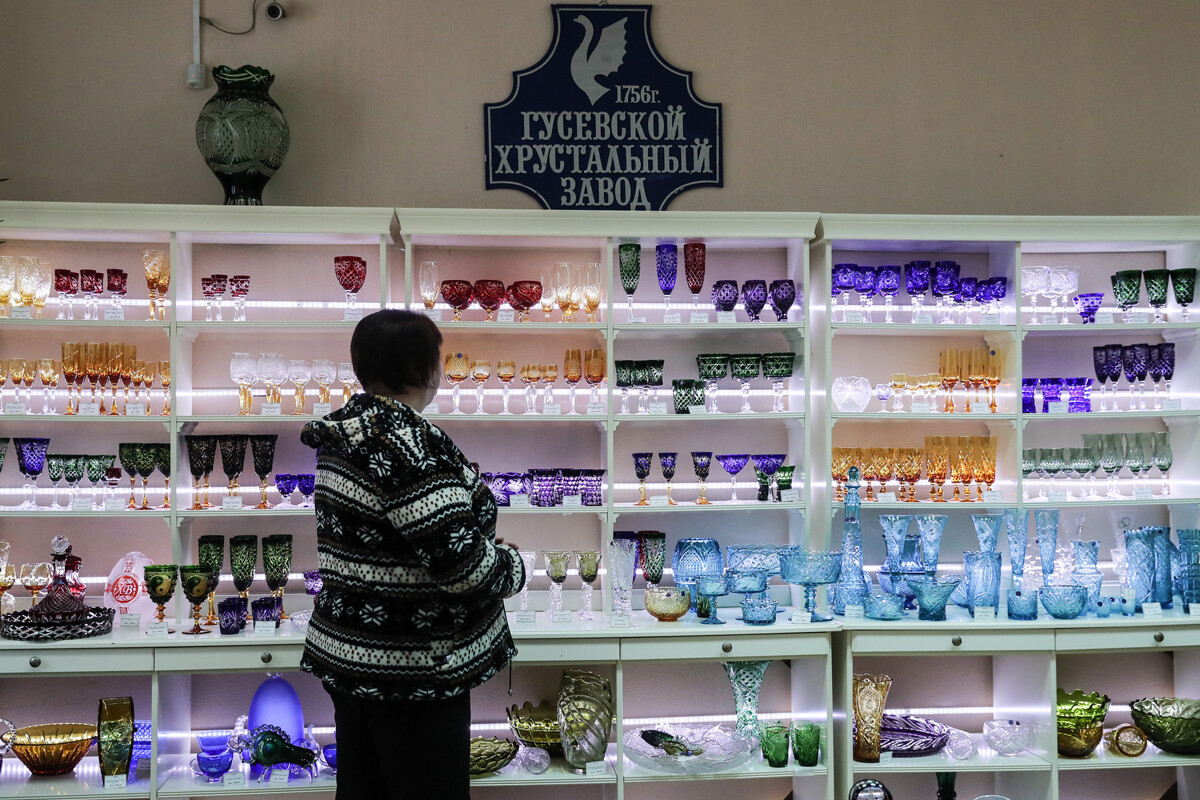 A store in the center of Gus-Khrustalny.

It is hard to imagine an old Russian town without shopping arcades. The center of Gus-Khrustalny is filled with typical mid-19th century buildings with elegant columns and balconies and is also the location of the crystal plant’s official store. The price for ordinary glass starts at roughly 2,000 roubles (approx. $35). A pair of glasses costs five times more. “You can distinguish our products from fakes in the following way,” says a salesperson, “first, the factory only produces classic crystal, not glass and, second, it’s very expensive crystal, as it’s handmade.” 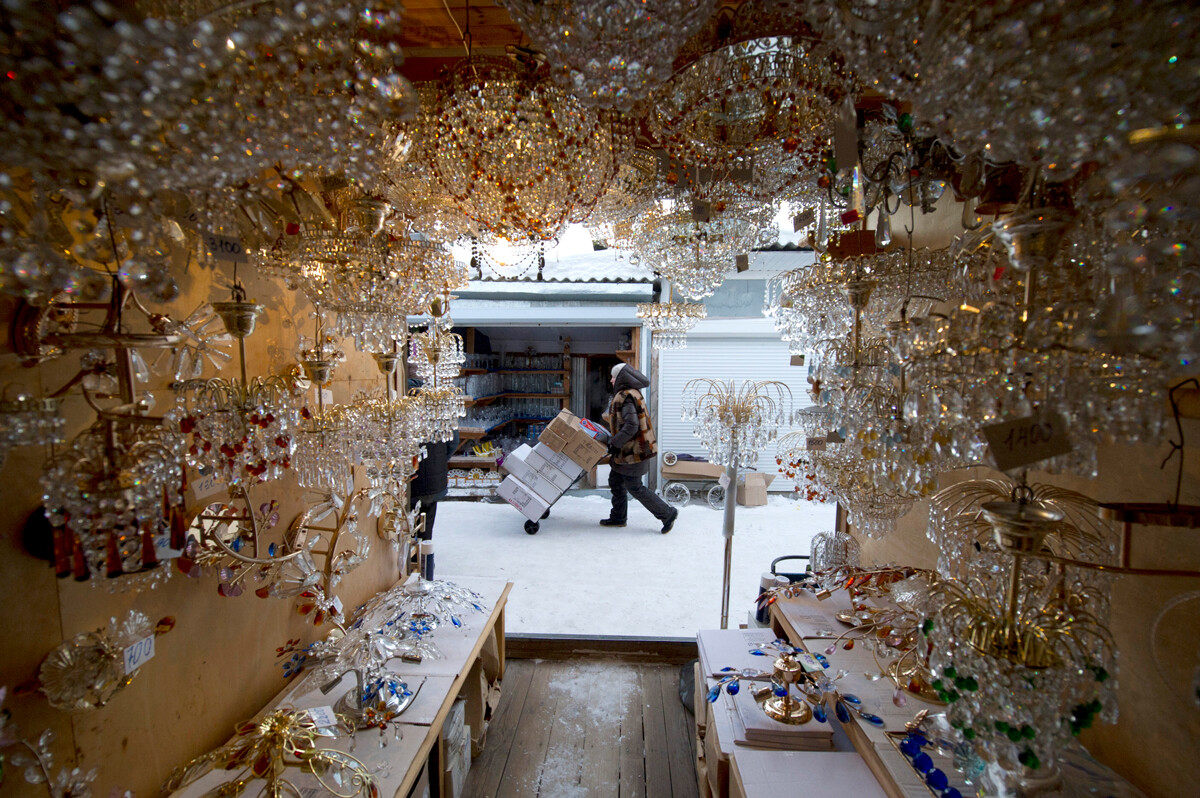 At the local market.

But, if your soul demands crystal, yet your budget is limited, there is another option. About 10 glass factories operate around the town. They produce chandeliers, dishes, souvenirs and technical industrial glass. All this and even more can be seen at the largest glass market, which besides local goods, brings glass and crystal from all over Russia and abroad.