A journey to Plyos: Falling in love with the Russian provinces 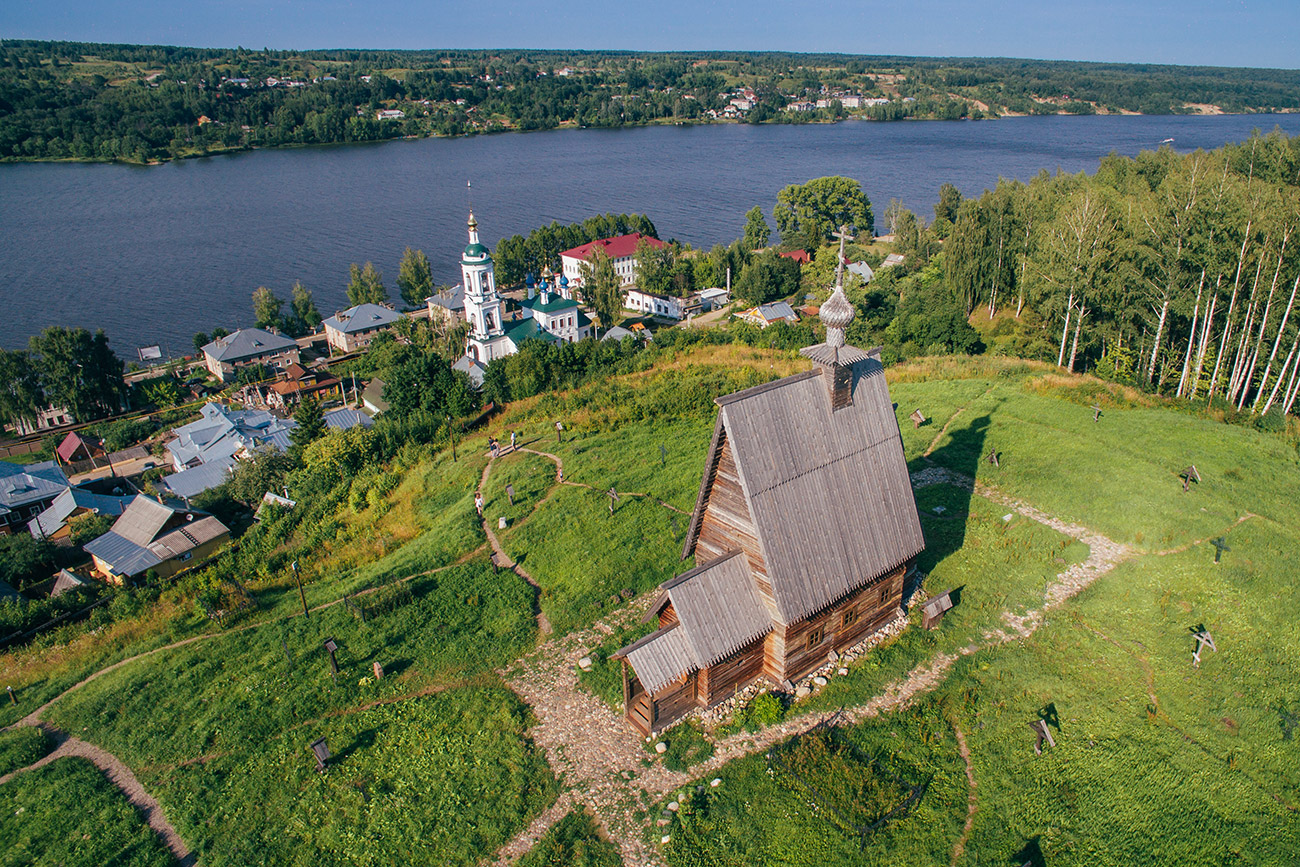 TASS/Natalia Garnelis
How a small town on the Volga became one of Russia's most recognized images.

An old woman wearing a kerchief is driving a goat along the cobbled street. "What a handsome goat you've got there!" says a tourist in a white sunhat who is walking toward them. He grabs his camera in anticipation. "Yeah, he looks just like you," the old woman croaks, adding in a menacing tone, "Put your camera away! It’ll make them sick!"

Letting her wooden staff clatter along the pavement, the old woman drags a huge goat - its head at the level of her chest - uphill past the wooden houses with carved window cases and the lopsided belfry of the Sobornaya ("Church") Hill with a white church. At the top of the cliff, a few dozen people cannot take their eyes off the river, which glistens among the dark hills dotted with spiky rooftops, church domes and ancient fir-trees. 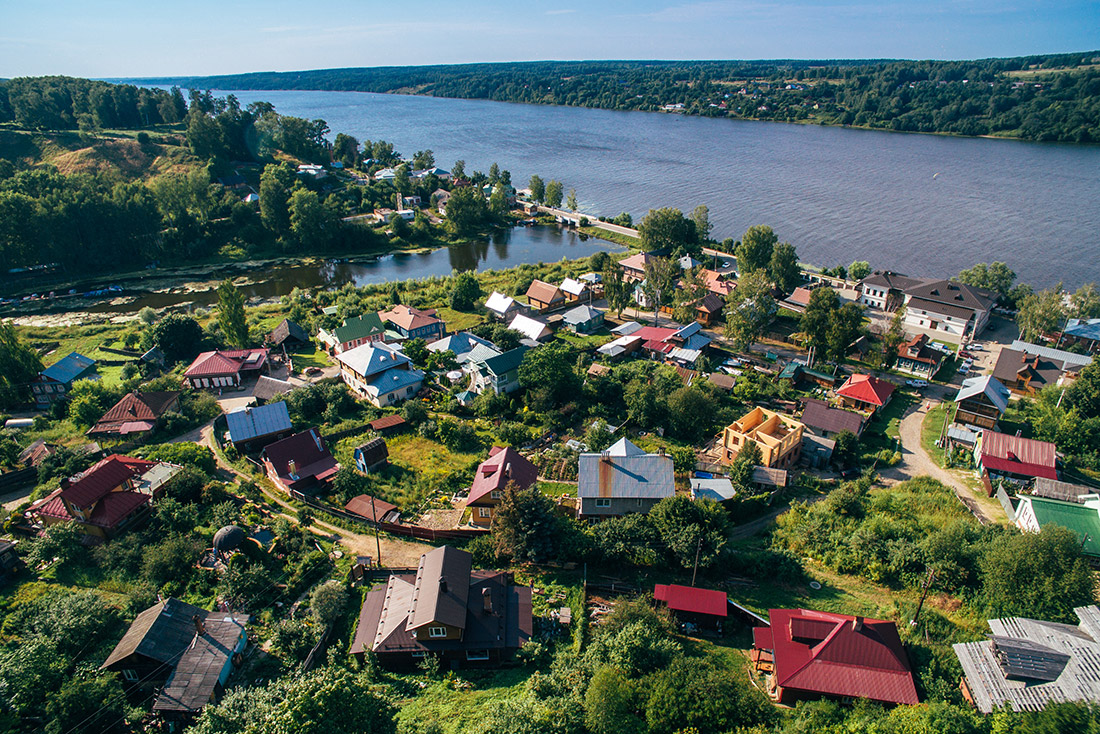 120 years ago, this landscape was painted by Isaac Levitan, who was unknown at the time.  He soon made his way into Russia's top ten landscape artists. It was he who made the view from the Sobornaya Hill in the town of Plyos one of Russia's most recognized images.

A house with a mezzanine 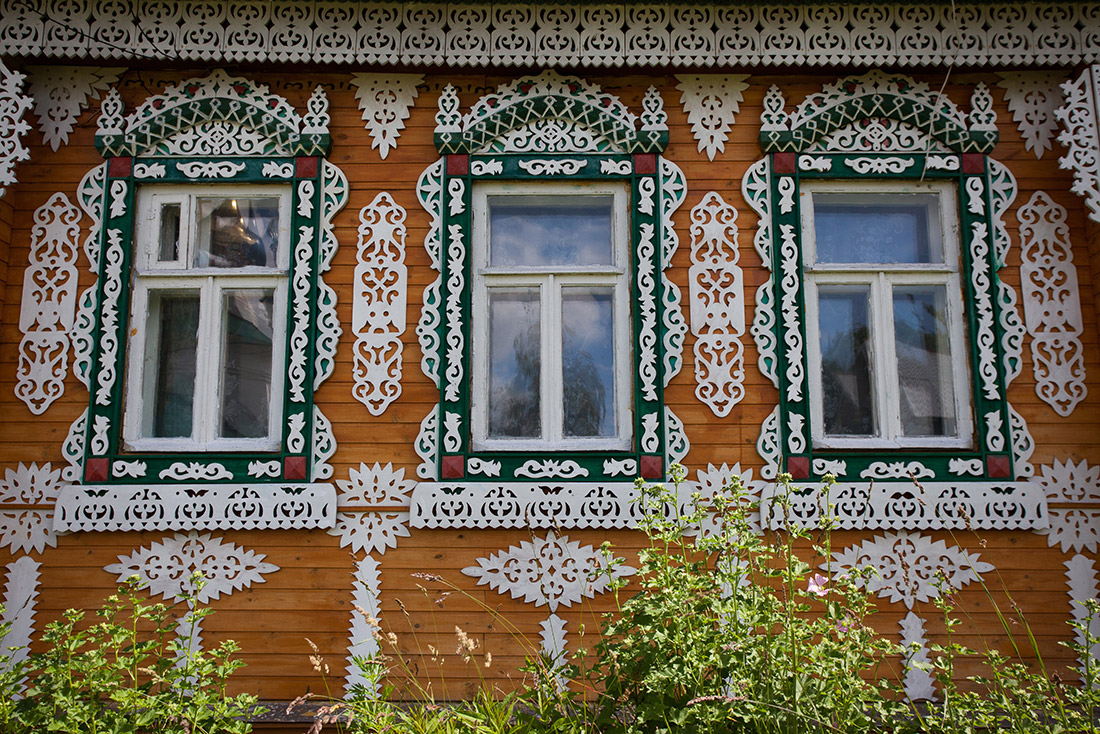 Located 395 kilometers away from Moscow, Plyos is a tiny town – one of the smallest in Russia. With a population of 2500, the town has nine churches, five museums, a theater and a handful of multicolored wooden houses scattered across the wooded slopes of hills and ravines. Narrow streets lead down to the Volga, also narrow at this point in its course, and collide with the main river of Russian geography and Russian culture at a dizzying angle.

The most famous mansion in Plyos is a house with a mezzanine on the Volga embankment – the former estate of the merchant Solodovnikov. In 1888, 28-year-old Isaac Levitan stayed here with his friend, Sofya Kuvshinnikova. These Muscovites had decided to travel down the Volga in search of inspiring landscapes, but in vain – until Levitan went for a walk on the deck on a summer evening, to see a wooded hill surrounded by small houses. "Let’s go!"  he declared to his companion, without so much as asking the name of the town.

The room they rented from Solodovnikov, a local merchant, was filling up with fresh paintings so fast that the paint barely had time to dry on the canvas: Levitan would set up his easel on the hills of Plyos every morning. In the fall of the same year, after the artist's exhibition of Plyos landscapes opened in Moscow, he woke up famous. 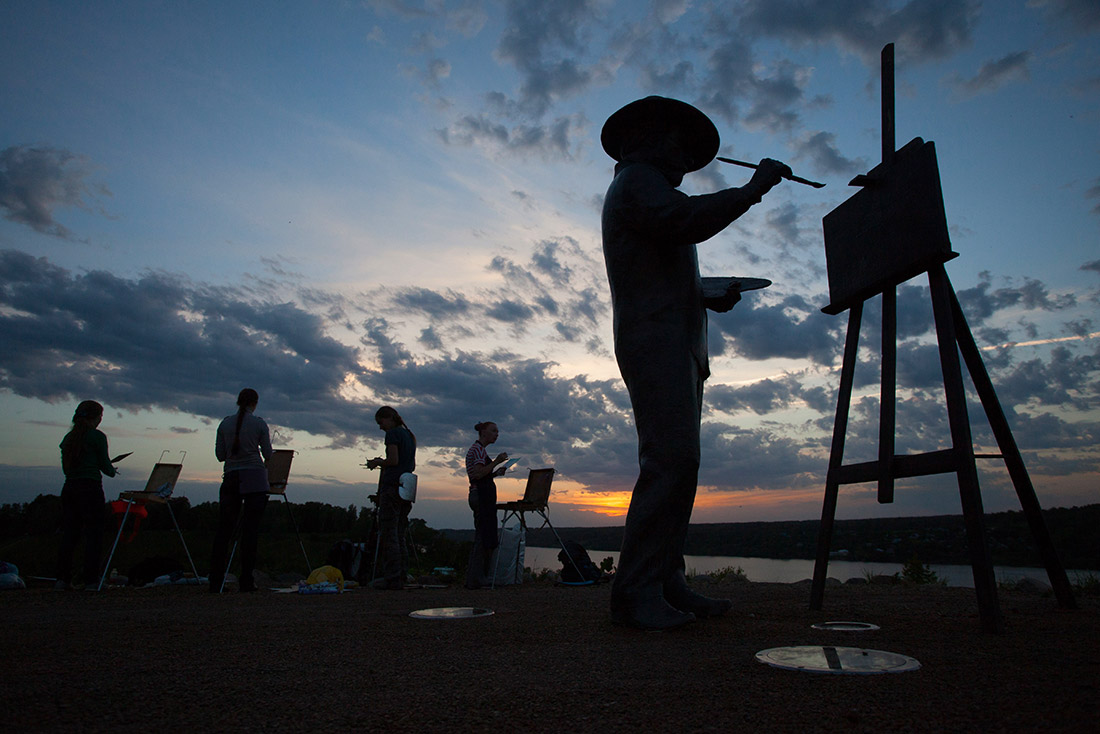 "If only I had the money, I would buy Levitan's 'Village,' gray, miserable, godforsaken and ugly, but at the same time inexplicably, enchantingly beautiful..." writer Anton Chekhov wrote regretfully in a letter to his brother. 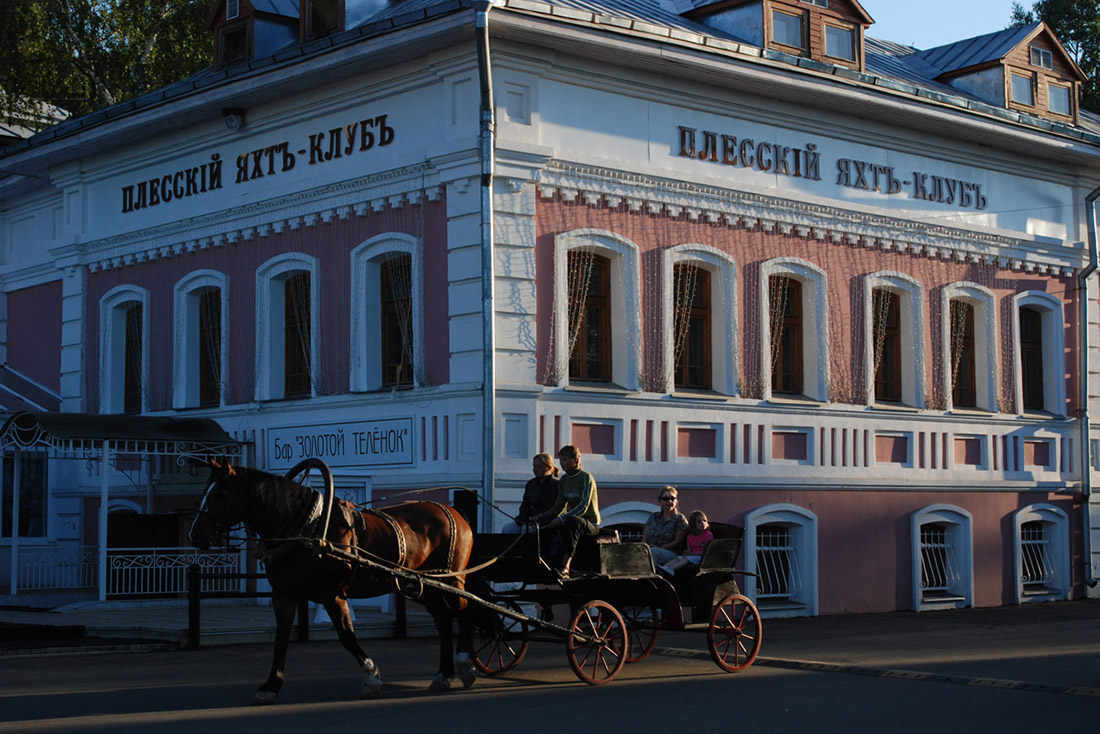 The flattest area in the hilly town of Plyos is a three-kilometer-long strand of the city embankment, framed with merchant houses of the late 19th and early 20th centuries. Today, these estates named after their historical owners, merchants of the Volga region, – Novozhilov's house, the Moiseevs' mansion and Filosofova's house – form part of the local "backbone enterprise," the Sobornaya Sloboda chain of premium hotels, which brought the town back to life 20 years ago.

The restaurant of the local yacht club treasures an entry made in their guestbook by Dmitry Medvedev, the Russian president from 2008 to 2012: "Thank you, the food was delicious." One of the guest houses features a shining table that commemorates the stay of the Prince and Princess of Kent. The locals recall how the princess showed her delight at the goats nibbling on chrysanthemums by her window on an early morning. Plyos is notorious for its high prices: A night in a renovated merchant's house can reach 1500 euros.

Where to look for an authentic Russian landscape 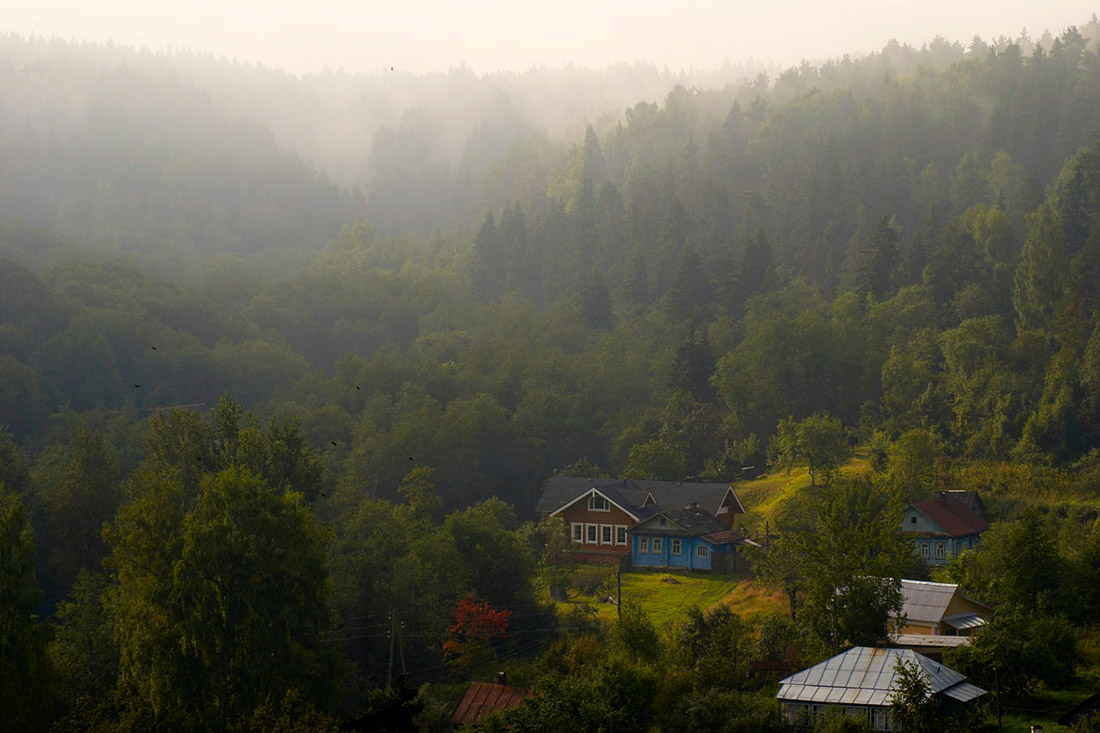 The ancient house of merchant Solodovnikov on the Volga embankment has not been turned into a hotel. The house where Levitan spent three summers in 1888–1890 and painted about 200 works, which are now displayed in world's best museums, is now a museum as well: Its late 19th century interiors have been restored, with the addition of a few landscapes by Levitan and his students.

The neighboring Museum of Russian Landscape Art displays Russian classics of the genre: Savrasov, Bogolyubov, Zhukovsky, Shishkin, Clodt – a remarkable collection for a provincial town with a population equal to that of two high-rise apartment blocks in Moscow. 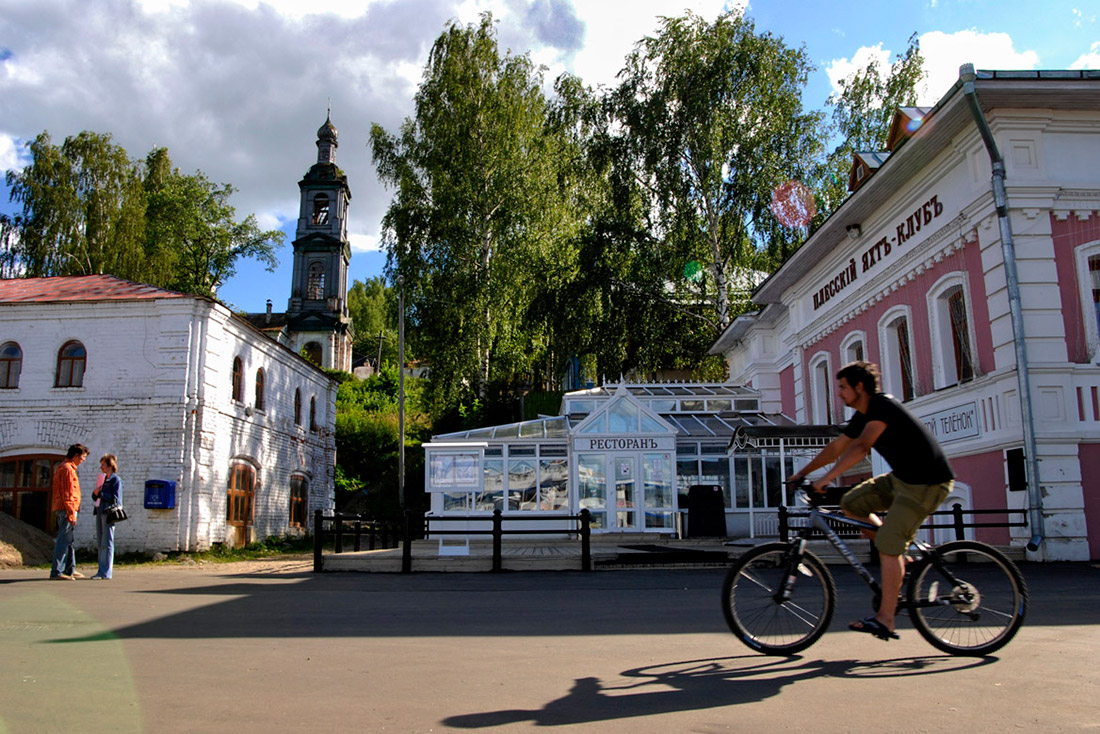 Every day from May to October, white cruise boats moor at the Plyos pier. The Volga is Russia's main cruise line. During their few hours in Plyos, tourists do their best to buy all the linen tablecloths in the souvenir shops, all the fishermen’s smoked bream -  and then they drop by a couple of the most important museums.

Those who have been lucky to buy a house in Plyos or rent a mansion for a couple of days (at the cost of an entire cruise) look at all the bustle with a certain detachment. At weekends, they attend performances of the Plyos dacha theater, followed by dinner in one of the restaurants.

However, the main ritual that unites both the cruise passengers and the dacha residents is the evening pilgrimage to the Sobornaya Hill. The birch grove on the top of the hill overlooks at least half of the town's churches, its green slopes and wooden cottages, half-hidden among the trees. The Volga stretches up to the very horizon, forming a flat surface, which is called "plyos" in Russian. These are the elements that comprise the landscape which Levitan turned into a image of the Russian province. 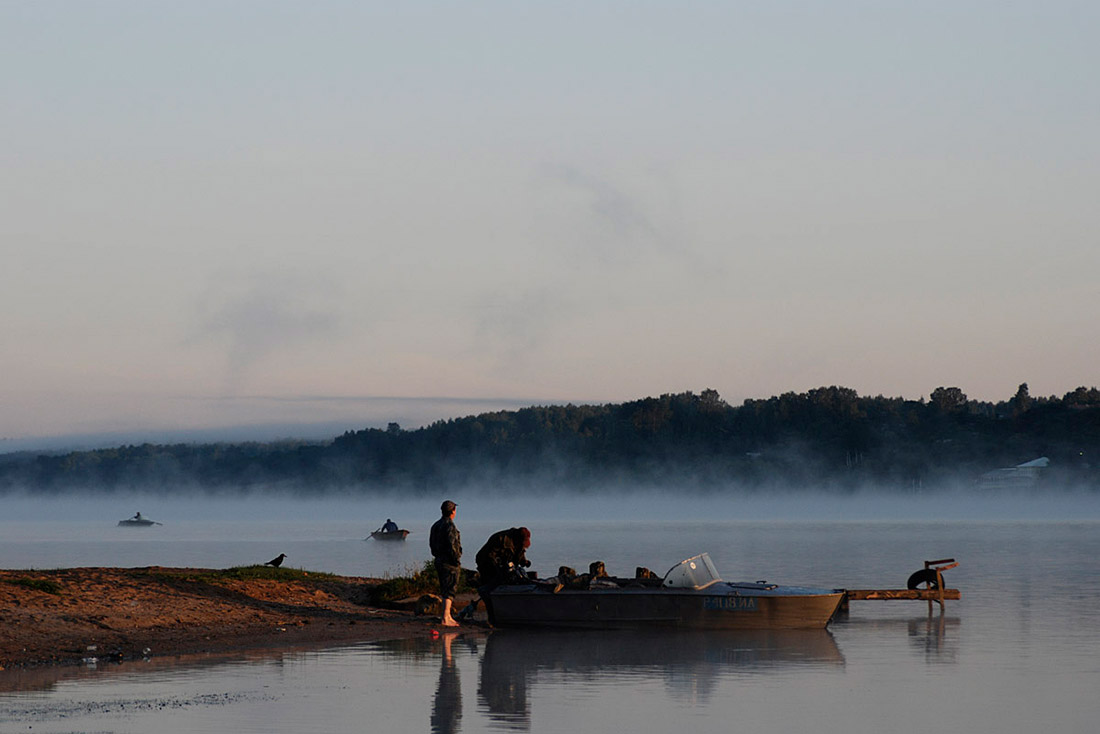