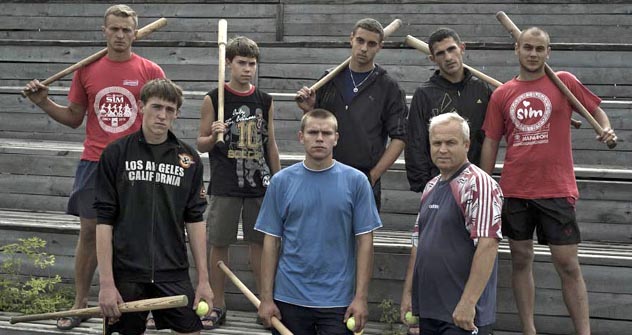 The famous Russian writer Alexander Kuprin gave a vivid description of lapta: “This folk game is one of the most interesting and beneficial games around. Lapta requires resourcefulness, controlling your breathing, being true to your team, being alert, dexterity, fast running, good marksmanship, strong hands and enduring confidence that you cannot lose. There’s no place for the lazy and cowardly in this game.”

Russia is definitely not the first country that comes to mind when one thinks of cricket. Many people here will give you a blank stare when cricket comes up in conversation. Not knowing about cricket, however, doesn’t mean being completely isolated from it. As a matter of fact, Russia boasts a national game, called lapta, that’s very similar to cricket and baseball.

Lapta seems to have been invented a long time ago. Ancient Russian chronicles mention the game, and balls and bats have been found at archeological excavation sites in Novgorod, the Russian capital between the 9th and 12th centuries AD. All this thus begs the conclusion that lapta is at least as old as cricket, and without a doubt much older than baseball.

Peter the Great used the game for his elite guard troops’ physical training. Two centuries later Red Army soldiers played lapta for the same reason. Ordinary folks played lapta as a leisure sport. The late 1950s were truly lapta’s golden years: the game was officially recognised as a sport, championships were held and lapta was even included in the national Olympics. Thousands of teams played the sport across the country.

Suddenly, for some odd reason, the sport’s development came to a screeching halt: nothing was heard of it for some 30 years, and sports organisations could not have cared less about it. After a government decree was enacted to development baseball, softball and lapta in the late 1980s, lapta slowly began its long recovery. The rich tradition associated with Russian lapta helped save the sport; all it took for it to recover was state support. The Russian lapta male championships first took place in 1990, and have since become an annual event.

Today, at least 10,000 athletes in Russia play lapta on a more or less regular basis. This is, of course, far short in numbers compared to football, hockey, tennis, biathlon, boxing or other more popular sports. But that’s not the point. Lapta is interesting in that it’s perceived to be a quintessentially national sport, invented in Russia and not imported from elsewhere.

So what are the rules and how is lapta different from cricket? Lapta is a team sport, with six players on each team and the match split into two 30-minute halves with a five-minute break in between. Players use 60–110 cm long bats that are no longer than five centimeters in diameter and weigh around 1.5 kg; a tennis ball weighing 60 grams serves as the game’s ball.

After the official determines the serving order by drawing of lots, players take their positions: the defending team proceeds to the field while the server stands on a special pad. A teammate will throw the server a ball to be hit strongly and accurately; if the ball goes out of the field without touching the ground, it’s a strikeout. Once the ball is served, the batting team’s players rush forward with the aim of running up to the “kon” line and back “home” while the ball is in play. If successful, each player earns two points for the team. The runners may remain beyond the kon line until their team bats again, at which point they can run back. Tackling runners is strictly forbidden.

Fielders can take runs away from their opponents by tagging runners with the ball. After tagging someone, the fielder must run beyond the base line or home before getting tagged themselves. Both teams may tag each other as long as any player remains outside the baseline or home areas. If a fielder catches the ball while it is in the air, the team gets one run. If there is no one to be tagged, the ball is given back to the picture. If a runner returns before completing his run, he is automatically called out and the teams rotate sides.

Fouls are punished by yellow cards, while repeated fouls, unnecessary roughness and brawls on the field are given a red card. As soon as a team has less than four players remaining, that team automatically losses the game.

Among its other pluses is that lapta is a year-round sport. In the wintertime field lines are painted right on the trampled down snow. Indoor lapta is played on a smaller field, with certain adjustments to the rules in cases when the ball bounces off the walls and ceiling. This doesn’t, however, detract from the game as a spectator sport. You can take my word for it: watching lapta championships is no less exciting than cricket matches.