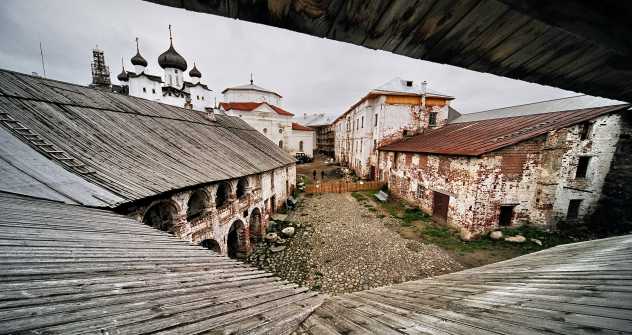 The Solovetsky Islands form the largest archipelago in the White Sea, consisting of six major islands and more than a hundred small ones. It is a place with a unique history and atmosphere. The Solovetsky Monastery was founded in these northern latitudes (just 165 km south of the Arctic Circle) in the 15th century by the monks German, Zosima and Sabbatius. A hundred years later, Father Superior Philipp turned the monastery into a powerful Russian northern outpost. The monastery’s stone walls have seen exiles and disgraced noblemen, the streltsy guards and the British Navy. The tragic history of the Solovki began in the early 20th century: in 1920 the monastery was shut down and three years later became a labor camp mainly for political prisoners. During World War II, it was the site of a Northern Fleet naval school, and in the 1950’s it became the Solovetsky Islands Museum-Reserve. In 1990, the Solovetsky Monastery was re-opened and once again it is one of the most important Russian Orthodox centers in northern Russia.

The gem of Karelia, the open-air museum of architecture at Kizhi, seems to have grown out of the landscape of the flat banks of the Kizhi Island and the smooth surface of Lake Onega. This harmonious masterpiece, built by anonymous artisans, dates back the 18th century. The 37-meter-high Great Transfiguration Church has 20 onion-shaped domes and was built without a single nail. Legend has it that the carpenter who built the church had only an axe, which he threw into Lake Onega after finishing his job as a sign that the greatest work of his life was done. The second Kizhi church, the Intercession Church is a smaller and more modest. The finishing touch to the ensemble is provided by the domed bell tower built in the 19th century.

The Trinity-St. Sergius Monastery can be seen from afar, as the blue star-studded domes of the Assumption Cathedral and the 88-meter-hight golden dome of the bell tower soar skyward. The white stone golden-domed Trinity Church contains the relics of Sergius of Radonezh, the founder of the monastery and one of the most revered Russian saints. The monastery is surrounded by powerful walls with towers, a reminder of the times when the complex, like many other Russian monasteries, was a veritable fortress: during the Time of Troubles it withstood a nearly 16-month siege by Polish troops in 1608-1609. The main entrance to the monastery is the Holy Gate, decorated with frescoes showing scenes from the life of Sergius of Radonezh.

The largest tract of forest in Europe still untouched by human activity is the virgin forests of Komi, stretching across the Ural Mountains. An area of more than 3 million hectares is covered by thick taiga forests, which are the habitat of unique animal and bird species, many of which are on the endangered species list. The area has two natural reserves: Yugyd Va, which translates as “clean water,” and the Pechora-Ilychsky Reserve with mysterious “stone idols” formed by the erosion of mountain rock on the Manpupuner Plateau.

The Putorana Plateau, a remote mountain ridge in the Krasnoyarsk region of eastern Siberia is unique because its 2 million hectares of territory present diverse ecosystems: forest-tundra, Arctic desert, and virgin taiga. Spacious flat plateaus are interspersed with gorges, canyons and lake valleys. The Putorana Plateau is known as “a land of 10,000 lakes and a thousand waterfalls.” Indeed, no other place in Russia has as many waterfalls, the biggest of which is Talnikov. The Putoran plateau boasts unique fauna with rare lynx and sable fox and the migration routes of the wild northern deer passing through it.

Central Siknhote Alin is a biosphere preserve in the Primorye (Maritime) province of Russia stretching from the Sea of Japan to the Sikhote Alin mountain range. Its attractions include thick spruce and cedar forests and ancient yew tree groves, Shanduysky mountain lakes and the gaunt rocks of the Abrek preserve. Scientists observe the seal and sea bird colonies on Cape Severny and Cape Schastlivy. Unique animal and plant species are under protection in the reserve. In 1935 when the preserve was created, it saved the practically extinct sable fox; today it is possible to observe rare animals such as the Amur tiger and the Hymalayan bear.

The Western Caucasus, or the Caucasus Preserve, is the largest mountain forest reserve in Europe and the oldest reserve in Russia. During the 19th century, grand princes hunted here, giving the territory the name of “Kuban Hunting Preserve of the Grand Princes.” During the Civil War and in the early 21st century the animal population was greatly depleted, with the bison affected most of all. This prompted the creation of the Caucasus bison reserve in 1924. Today the fauna still consists of large mammals: the bison, the reindeer, the roe and the gazelle. The high altitude parts of the reserve are famous for their beautiful alpine meadows.

The Altai Golden Mountains consist of three preserves: the Altaisky and Katunsky preserves and the Ukok plateau, which have a combined total area of more than 16,000 square kilometres. The highest point of the Altai Mountains is Mount Belukha (4,506 m), or White Mountain, so called because it is covered in white snow from its foot to the top. Folklore has it that this is the place of the legendary Shambala. Another place of interest in Altai is Teletsky Lake or, as the indigenes call it, Altyn-Kol (Golden Lake) surrounded by picturesque waterfalls and grottoes. Altai soil contains a lot of ancient artifacts: archeologists have found Bronze Age burial mounds in the Pazyryk area.

The name of Baikal most probably derives from the Yakutian word Baig’al meaning “deep water.” And indeed, that lake in Eastern Siberia is the world’s largest deposit of fresh water with a depth of 1642 metres. The lake surface is 30,000 square kilometres, big enough to cover all of Belgium or Denmark. Its cold water is so clear that it is possible to see to a depth of 40 meters, and so clean that it can be drunk like distilled water. The 1,800 kilometer tourist trail running along its coastline is called the Big Baikal Trail.

The historical center of Yaroslavl is remarkable for its layout and architecture, which primarily dates back to Catherine the Great’s ambitions 18th century urban development program. Yaroslavl was one of its more successful examples. The wide streets shaded by large trees are lined with two- or three-story houses that do not obscure the city’s churches and towers. The streets converge on the central Sovietskaya Square where the Church of the  Prophet Elijah stands. Luckily, the center of Yaroslavl did not see much devastation during the Soviet era and was spared the chaotic building boom of more recent times. The Volga Embankment and the gentle slope leading to the Kotorosl River have survived intact.

Kazan, the capital of Tatarstan, symbolizes the peaceful coexistence of Christian and Islamic cultures. The Kremlin in the heart of the city has both Orthodox and Muslim monuments. It was built on the ruins of a Tatar Bulgar fortress that stood on the spot in the 12-14th centuries. Now the 16th century Assumption and Transfiguration churches stand cheek-by-jowl with the Qol Sharif mosque, built in 2005. All the churches and the mosque are functioning. A breathtaking view of the Volga and the surrounding countryside opens up from the Soyembike Tower. The former governor’s palace is now the residence of the president of Tatarstan.

Novgorod the Great, a small town by Russian standards (200,000 people), has been put on the World Heritage List because it has an impressive array of historical monuments. The Novgorod Detinets (or Kremlin) is a fortress on the Volkhov River, its chief attraction is the white stone St. Sophia Cathedral, the oldest Russian church built by the Slavs. There are ancient monasteries with a rich history, including the Zverin-Pokrovksy Monastery and the St. Anthony and St. George monasteries. The wonderfully proportioned Savior on Nereditsa Church, which was heavily damaged during World War II, has been fully restored. Thirty-seven of Novgorod’s medieval buildings are included on the UNESCO list.