Siberia made the world play 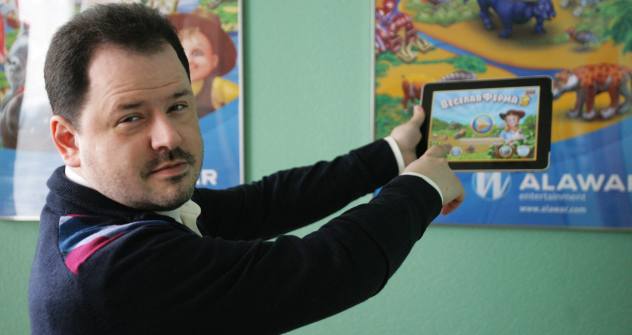 Alawar Entertainment became one of the biggest games companies in Eastern Europe, with a turnover of about $100 million.

“What the hell. It got stuck again.” A pretty girl of about 20 whispered threats into her phone as she moved her finger across the screen. She looks distressed. She was playing the popular game “Farm Frenzy” and had forgotten to water the flower beds.

“Nothing new has been invented in computer games since the mid-1990s. Everybody repeats the old mechanics; only the design and the control methods change. But more and more people are playing and they want to do it on anything that has a screen: phones, TV sets, consoles – nobody cares how it all works,” said Alexander Lyskovsky, owner of Alawar Entertainment, a Novosibirsk-based video game developer.

Related: iPhones for the people

Alawar is currently one of the biggest games companies in Eastern Europe, with a turnover of about $100 million. Lyskovsky asserts that the global market for these casual, mobile-based games is about $1 billion, and that Alawar’s share is 9–10 percent

The company is mainly a publisher and distributor, cooperating with 40 studios that develop video games in Russia, Ukraine and Belarus. In addition, Alawar has six firms making games exclusively for it. The company has all parts of “Farm Frenzy,” “The Treasures of Montezuma” and several hundred other games.

Lyskovsky first began working in the industry in 1997, as a 20-year-old programmer and student at Novosibirsk University.

“Two of my friends and I teamed up to make a big and complicated game financed by Krasnoyarsk oil pipes suppliers. Krasnoyarsk had a distinct brand of bandits. When we met them, they produced stacks of banknotes from the car boot and said: ‘We need you to make a game.’

“One of their friends was the local writer Mikhail Uspensky, author of a trilogy about a warrior called “Zhikhar.” They asked us to make a game based on that book.”

The game was released during the 1998 crisis.

“We posted games [on our website] and the Americans started buying them like hot cakes, at $20 a piece. You sell five games a day and get $100, quite a sum in those days. And then something extraordinary happened. We got our first check from America, a real paper check for $500. It was Novosibirsk and the year was 1999. Three students came to the bank, produced some strange piece of paper and the clerks said “What is that? We don’t work with this kind of stuff.” We sent the check to Moscow and it was cashed three months later.”

That was the beginning of Lyskovsky’s relationship with Western gamers.

Lyskovsky is now 34. His company is still based in Nobvosibirsk. He is not planning to move, for patriotic and financial reasons: it is cheaper to run a company in Novosibirsk than anywhere else. Lyskovsky himself lives on a plane, as he puts it.

When asked if computer games were addictive, Lyskovsky said:  “Your cigarette pack has a warning ‘Smoking kills.’ But it does not deter you or the producer. And wine? It’s bad for you, but everyone drinks and enjoys it. Games are just entertainment, they help you to relax. I am a gamer myself.”

Lyskovsky calls his game casual because, as he said, “They are easy and simple, with short sessions, and they are addictive. For example, ‘The Treasures of Montezuma’ and ‘Farm Frenzy.’ Vampire games are very popular and we have a lot of them. I am fed up with them, but everybody tells me that they are trendy and we should make them. We are in the world media environment. If the game mechanics are standard, the script is dictated by the environment. When the ‘Cars’ cartoon came out, it spawned lots of games. Any major media event creates a huge number of new games. Soap operas are light, entertaining and short; people become addicted and want to see more and participate. That is where we come in.”

Developing a new game costs somewhere between $100,000 and $500,000, partially because they have to be developed for many different platforms, including Windows, MAC, iPad, iPhone, Android, PlayStation. Lyskovsky also likes to make games with complicated, well-drawn graphics, and his studio has a staff of 50.

“Nobody knows how to make a game popular: it just happens,” Lyskovsky said. “I know the guys who created ‘Angry Birds.’ Two Finns. They have a businessman uncle, nothing to do with IT. He gave his nephews money so they could make games because they liked it so much. The business made losses for several years, but their project number 38 clicked. And everybody began shouting, ‘Wow, Angry Birds, wow.’ The moral? Nobody knows how to create a hit.”

Lyskovsky is hoping to build on his experience with Alawar and develop a home for more IT companies at the Akademgorodok (Science City) technopark in Novosibirsk.

“We are trying to build an industrial park at Akademgorodok, in conjunction with other Novosibirsk companies. We want talented guys from all over Russia to come there, to study and to work. Something like Silicon Valley. Actually, we need all this to solve the simple problem of human resources. We have to build a new city to attract young talent. As soon as a company becomes big, it has to tackle issues such as education and personnel and even roads. That’s the way things are here.”

This article is abridged from the original version. It first appears in Russian in the Russky Reporter magazine.