Fears and threats in the realm of fantasy 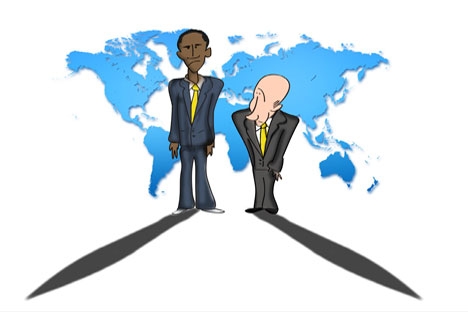 Cold War weapons remain an important political tool in the 21st century, if only because it’s easier to deal with theoretical problems than real ones.

I recently attended a Russian-American seminar on strategic relations. On the second day, one and the same thought occurred simultaneously to me and the American colleague sitting next to me: It would be a great idea to choose some island in the South Pacific and send all world experts on strategic stability and arms control there. They would be comfortable and happy, discussing first and second nuclear strikes, the dialectics of Mutually Assured Destruction, mutual verification possibilities, confidence-building through monitoring missile speed on takeoff, etc, etc. They would achieve interim results and then resume their discussions with gusto. Because it would be happening somewhere far away, these interesting activities would not interfere with the main course of international politics, which has long been developing in a different direction.

Russia and NATO in hot water

Not that this is unimportant or meaningless. As long as Russia and the United States have huge nuclear arsenals capable of destroying each other and the rest of the world, the principles worked out and accumulated in the era of bipolar nuclear confrontation can neither be cast aside nor sidestepped. But they are in a different dimension, a dimension that is real but, at the same time, parallel to the main place of action.

Recent statements by Nikolai Makarov, chief of the general staff of the Russian Armed Forces General Staff, to the effect that Russia might launch a strike against American missile defense installations if they are deployed close to Russia’s borders, caused a great stir. The most alarming thing was that the Russian commander did not rule out military action against Europe. This sounds frightening, but what exactly does it mean?

This is a typical example of a parallel dimension. In reality, everybody understands that there can be no war, nuclear or conventional, between Russia and NATO or Russia and the U.S. in principle – especially in Europe, which is fast turning into a strategic periphery, but really anywhere else. Yet the military must proceed not only from common sense, but from the potentials of hypothetical enemies that are being calculated and assessed. Meanwhile, for 20 years now, the North Atlantic Treaty Organization has been expanding to encircle Russia and, in the last 10 years, the United States has been talking about deploying strategic missile defenses close to Russia’s borders. That is also a parallel dimension, because the need to build missile defense installations in these places is justified by the need to protect Europe from the Iranian missile threat. Iranian long-range missiles do not yet exist and it is unclear why Iran, which is vying for regional influence with neighboring countries like Israel and Saudi Arabia, should target its missiles, if ever it gets them, on Europe.

The American missile defense system is a very costly, technologically sophisticated and politically controversial project that is virtually akin to religion. President Ronald Reagan’s idea that America could create a shield against any missile threats has been firmly embedded in the American establishment for nearly 30 years. It is gradually turning from a Reagan utopia (or rather bluff, intended to scare the Soviet Union) into a project in which huge sums of money and a lot of effort are invested. As long as the principle of Mutual Assured Destruction is in place and no other way of balancing the huge weapons arsenals of the U.S. and Russia has been invented, it is hypothetically possible to build a shield against a retaliatory strike. No matter that this scenario between Russia and America is beyond the bounds of reality. It is possible, so it is real.

Actually, the situation is still more speculative. The Americans tell the Russians that the first three phases of the proposed European missile defense could not damage the Russian arsenal and that such a theoretical possibility would only appear at the fourth, last phase. That phase is still a long way off and there is no guarantee that it is technologically feasible. This is probably true. But, on the other hand, if it is possible, how should the Russian generals react? Allow the system to develop until it becomes a real threat and only then take retaliatory measures? At that point, it would be too late. And the American response would be: Why did you agree in the first place, didn’t we warn you?

But again, all this has little connection with the real agenda and the real threats faced by Russia, the United States, NATO and other countries. The nuclear weapon, as soon as it was built, acquired a political rather than a military character. The whole point of having one was to show that it would never be used. Deterrence was not only mutual; the nuclear weapon imposed responsibility and disciplined those who possessed it. It is only a slight exaggeration to say that the nuclear powers restrained themselves and the adventurism of their own leaders, cutting out radicals from their elites.

The political function of the nuclear weapon remains; it is, above all, an element of prestige of a superpower, a great power or simply an important player in international relations (the real deterrent function is still relevant to countries like North Korea, which thus protect themselves against “regime change”). As a political factor, nuclear weapons will survive and all accompanying discussions will continue, but we should be aware that this is a parallel dimension linked with – but not coinciding with – the main dimension in which international events happen.

In politics, the virtual is often as important as the real. The world of perceptions, symbols and images, especially when bolstered by an existing, incredibly destructive, though unusable arsenal does exist, and developments will happen in this world. A non-existent missile defense system against a non-existent threat that provokes an impossible response and interminable and acrimonious discussion – all this is a symbol of the inability of the world political elite to face the real challenges. It is always easier to discuss what is very familiar than what is new and unknown. But reality will eventually prevail and arms control specialists will sail off to a desert island, if not in the direct, then in the figurative sense.