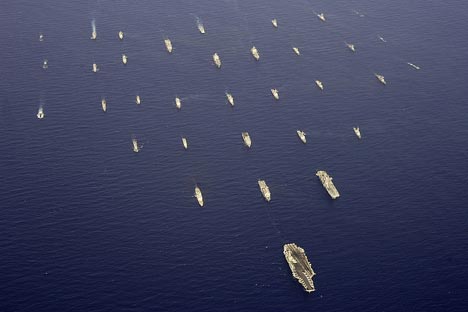 Russia will be taking part in the war games – RIMPAC-12.

The RIMPAC war games have been conducted since 1971, but it is for the first time that the Russian Navy is participating in them.

RIMPAC (which stands for “Rim of Pacific Exercise” – naval maneuvers involving Pacific countries) does not belong to the currently popular “humanitarian maneuvers”. It is a serious military war game aimed at testing combat interaction between the US fleet and fleets of its allies in the Asia-Pacific region. What’s more interesting is to analyze the list of participants.

In 2012, the fighting ships of Australia, Canada, Colombia, Mexico, New Zealand, Russia, Singapore, the US, France, Chile, South Korea, and Japan are going to improve their battle training. Soldiers from Great Britain, India, Indonesia, Malaysia, the Netherlands, Norway, Peru, the Philippines, Thailand, and Tonga are going to take part in some episodes both onboard their ships and on the other countries’ bases. In all, 22 countries are involved in the maneuvers. Bangladesh, Brunei, Brazil, Vietnam, Cambodia, Papua New Guinea and Sri Lanka will be represented by observers. Altogether, 25,000 soldiers, 42 fighting and support ships, six submarines, more than 200 aircraft and deck- and shore-based helicopters are going to take part in RIMPAC-12.

Yet it is much more interesting to pay attention to which countries are not in the list. Among the participants we find neither China nor, of course, North Korea, or Pakistan – China’s close ally and “client”. Their absence is quite understandable: at RIMPAC, China and North Korea are traditionally considered as possible enemies.

This phrase could probably serve as the Russian Foreign Ministry’s motto when it comes to relations in the Moscow-Washington-Beijing triangle. Since the 1990s – the times of Yevgeny Primakov’s Ministry – Russia has sought to maintain good relations with both the US and China, not joining in binding alliances with any of them. This concerns military cooperation as well. On the one hand, Russia is actively cooperating with China through regular joint maneuvers, on the other hand – the interaction with the US and NATO is certainly no less intensive, and now it is spreading throughout the Asia-Pacific region. This is not the first Pacific war games of the Russian Federation and the United States, suffice it to mention last year's Vigilant Eagle maneuvers, during which the two countries worked out joint actions of their Air Forces. But RIMPAC are maneuvers on a completely different scale.

Russia's interest in this case is quite pragmatic: joint maneuvers with the United States demonstrate the existence of a constant alternative to the “Chinese variant”, which can be implemented if Moscow’s and Beijing’s strategic interests do not coincide.

Participation in these kinds of maneuvers is also important because it allows Russia to get acquainted with the US and their allies’ modern war machine, the more so that RIMPAC always includes a “test” component.

During these maneuvers new armaments are regularly tested, firing practice at real targets (the role of which is played by written-off, out-of-service ships) is conducted, and experimental types of aircraft, ships and boats are regularly used. In what way will RIMPAC-12 differ in this respect is not yet known exactly, but the US Navy has already announced its intention to test a new type of ship fuel that consists of 50% of traditional naval solar oil and 50% of modern “biodiesel”. More than 4,500 tons of such fuel will be pumped into fuel tanks of the US Navy Henry J. Caiser consort, and will be handed over to warships in the course of the maneuvers. If the tests are considered successful, this experience will be applied on a larger scale – during such maneuvers fuel consumption is measured in tens of thousands of tons, not to mention the daily needs of the fleet.

The maneuvers will kick off on June 27 and last until August 7. However, the official opening and closing ceremonies are scheduled for June 29 and August 3 respectively. RIMPAC-2012 will certainly give a lot of instructive information for both specialists and the general public.