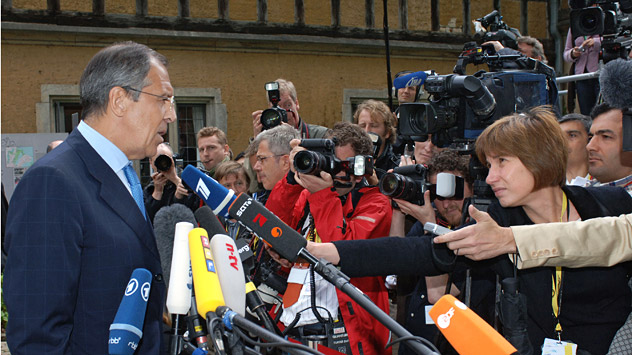 “The United States has already announced that it will move outside the framework of the UN Security Council, this position being incomprehensible to us,” Interfax quoted Lavrov as saying in an interview on Saturday, Aug. 18.

The U.S. statements came just a few days after a meeting in Geneva that created an action group on Syria made up of representatives of the five permanent UN Security Council members and a few of Syria’s neighboring states.

“I think what we hear from Washington and some other capitals about the death of the Geneva statement is irresponsible, for it is the most important consensus reached so far on Syria with the participation of the western nations (the United States and Europe), Russia, China, leading Arab countries and Turkey,” Lavrov said.

Russia's Foreign Minister also stressed that removal of President Assad could not be imposed on Syria from the outside. “The decision is up to Syrians themselves,” said Lavrov.

“As I have already said, the regime has committed a lot of mistakes. But one of the main reasons for the conflict’s escalation since the initially nonviolent and subsequently violent and even armed confrontation broke out, was that those clamoring for Assad’s resignation right from the outset dismissed the opinion of the part of Syria’s nation, which, let’s face it, has all along regarded him as the guarantee of their rights and security in Syria,” Lavrov said.

Lavrov added that Syrian minorities “are now throwing their support behind Assad in the hope that he will guarantee their rights are also part of the Syrian nation.”

Lavrov suggested calling a ceasefire in Syria under the guidance of external players to keep the mission of the new UN special envoy for Syria, Lakhdar Brahimi, from being a failure.

“No political dialogue will be established. At least, the efforts will not lead to a final result, unless the violence is halted… So, if we want the political settlement to be a success, we all have to turn on the opposing groups and pressure them into a ceasefire, persuade them to designate negotiators, send them to a mutually acceptable, agreed place upon, and start talking,” Lavrov said.

In an interview with Sky News Arabia, Lavrov also refuted allegations that Russia was entering into new contracts with Syria to supply weapons to Damascus in response to the harsh criticisms of Russia's policies doled out by Philip Gordon, U.S. Assistant Secretary of State for European and Asian Affairs. “Let’s be honest: this is about arms and equipment purchased from the Soviet Union. We have repeatedly stated that we have honored our old contracts. We have not concluded any new contracts so far,” Lavrov said.

As for U.S. military plans regarding a no-fly zone over Syria, Russia's Foreign Minister was adamant that it would be a violation of the state’s sovereignty and the UN Charter.

From Syria to Iran

In the interview, Lavrov also commented on the issue of Iran’s nuclear program, making statements to the effect that it is no more dangerous than many other international problems.

“The disagreements remaining between the six world powers and Iran are still very serious but I would not describe them as any more serious than those in the Israeli-Palestinian conflict or the Arab-Israeli conflict settlement, more serious than those over Western Sahara or a weapons of mass destruction-free zone in the Middle East,” Lavrov said. “I do not see any reason to treat the Iranian nuclear issue as the only one likely to explode.”

The world ignores Igypt on its own pencil

According to Lavrov, Russia has in no way written off the recent talks on the Iranian nuclear issue in Istanbul and Moscow as a failure. “Both in Istanbul and in Moscow, and during subsequent meetings, we achieved certain progress, for the parties set out their approaches in much more detail and far more precisely than ever before and, what is more, not in a declaratory, slogan-like form, but strictly in relation to specific aspects of the issue: uranium enrichment, uranium enrichment percentage, suspension of uranium enrichment, certain reciprocal steps, etc,” Lavrov said.

In their efforts to settle the Iranian nuclear issue, the sides were using a phased approach and were guided by the principle of mutuality, he continued. “And we are making progress there,” Lavrov said, highlighting that negotiations, and definitely not military force, were the only way to achieve a settlement.

This article has been abridged from the original Russian version, which is available in the Vzglyad newspaper.