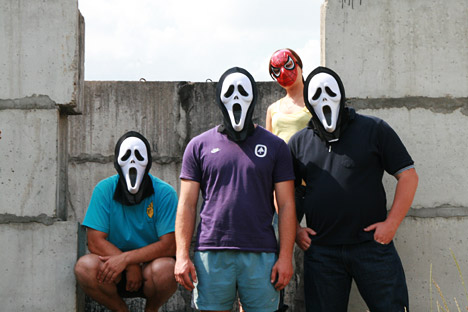 Emerging squads of voluntary militias start their own struggle against crime in Russia, without having any authority to do so. Source: Duri.net / Press Photo

Against the background of nation-wide campaigns against pedophilia and drug abuse, more and more unofficial “militias” are popping up in Russia, interpreting statements made by officials for themselves and attempting to solve social problems with their fists. The attitudes of society towards these Robin Hood sqauds are mixed.

When one form of crime or another intrudes into our lives, one of our initial, involuntary reactions is to fight it off ourselves. According to psychologists, this is the basis on which the phenomenon of voluntary militias depends: these squads start their own struggle against crime, without having any authority to do so. However, these police helpers do not always sense the boundary between civil consciousness and lawlessness. As the newspaper Moskovskiye Novosti found out, there are several of these kinds of squads in Russia and their methods are available for viewing on YouTube.

One of the pioneers of this partisan tactic was the Duri.net movement, which began its fight against drug addiction in 2009. “Several years ago our friend, a master athlete, died because of drug abuse. He literally wasted away before our over the course of two years. He left behind a wife and a small daughter. After that, our company – about 15 sportsmen – began a struggle against drug traffickers,” 29-year-old Daniil Shamanov, head of the movement, says.

Their struggle involves the following: they find drug traffickers on the Internet, make an appointment – supposedly to make a purchase – and, instead of handing over money, they throw paint right in the dealer’s face. This entire operation was recorded and the video was posted on the Internet. Now the group has a new enemy – pedophiles. Their tactics have not changed though.

They also find pedophiles through the Internet, registering accounts on dating sites as children. If they are solicited for sex on the basis of these under-aged profiles, they arrange a meeting. At the agreed-upon meeting place, several members approach to the supposed pedophile and the meeting often ends with a beating. “The important standard of our work lies in the selection of clients- any kind of instigation is ruled out. The man has to find a child and suggest sex all by himself,” Daniil explains.

Shamanov is not afraid of being punished for hunting drug traffickers and pedophiles, because it is doubtful that any of these “victims” will report to the police. “Our clients are real pedophiles and drug traffickers. We have their letters, some compromising evidence. Drug trafficking is punished by imprisonment from 5 to 12 years and sexual offenses against minors – by imprisonment from 7 to 20 years,” Shamanov says.

“Svetlaya Rus” also records their pursuits of illegal immigrants and posts the videos on the Internet. The plot of these films is always the same: at night, a group of young people break into a basement shouting: “It’s an FMS aid group!” They shake immigrants from their slumber, throw ID papers at them, search them and make them go outside. Then they line up these guest workers near the building, shine flashlights in their faces, order them to show their passports and state how long they have been living in Moscow.

In the FMS, however, the “Svetlaya Rus” squad is referred to as a headache. “I saw videos made by ‘Svetlaya Rus’, their actions are illegal. To begin with, they have no right to break into someone’s home and check their documents. That’s the duty of the police. Secondly, ‘Svetlaya Rus’ members have no right to present themselves as FMS officials, because they are not. The FMS doesn’t need any help that trespasses against the law,” says Sergey Aksenov, Press Secretary of the FMS Department in Moscow.

StopKham activists post online videos of their fight against drivers who violate parking regulations. StopKham members place big stickers on the windshields of improperly parked cars. Almost always, the car’s owner simply scratches the sticker off, but a new one appears in its place immediately. The driver eventually becomes irritated and the debacle often comes to blows.

“We act creatively and solely within the legal framework. Otherwise, we would have been put in prison long ago,” says Dmitry Chugunov, the project’s coordinator. Speaking on the motives behind his action, Chugunov says, “I can’t stand rudeness in general. And I’m especially irritated by everyday rudeness.” He draws no parallels, however, between his actions and the rudeness of the drivers he persecutes.

Russians have mixed attitudes about these voluntary, militia-like groups: part of the population supports them, the other part condemns them. “When crime flourishes in the country, people feel a desire to organize themselves and to fight it off. People feeling hostile aggression gather in pseudo-gangster muscle groups and take the law into their own hands,” Vladimir Pribylovsky, president of the Panorama information and research center, says. Often, the leaders of such aggressive youth organizations trying to make a political career for themselves; ordinary members, are either avenging themselves, if they suffered at the hands of criminals themselves, or are taking part in these actions just to let out to their aggression – this is how Pribylovsky explains the motives driving these groups.

According to Aleksander Ogorodnikov, youth organizations that struggle against criminals are worthy of respect, even if they act “on the verge of breaking the rules”. In the 1960’s, Ogorodnikov himself headed a similar squad in a provincial town of Chistopol. Aleksander does not conceal the motives which he believes guided similar groups in the Soviet period, saying that young people were reacting to violence after being raised in troubled families. “It was our vendetta. We fought fire with fire, because members of those youth gangs didn’t understand words,” Aleksander Ogorodnikov says.

The police refused to talk about youth squads to the newpaper Moskovskiye Novosti. “I won’t comment on this topic, it is very controversial,” Oleg Yelnikov, head of the MIA Press Center, said.

The story is based on the article by Natalya Berishvili of Moskovskiye Novosti.