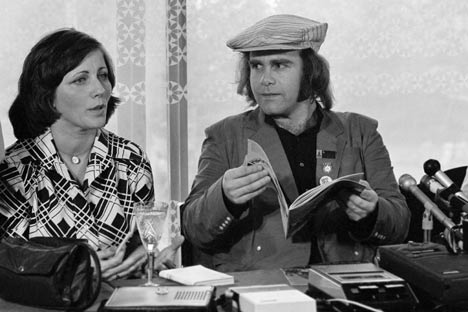 Elton John during his 1979 tour to the Soviet Union. Source: ITAR-TASS

Relics from the 1970s, monsters of rock, hipsters’ favorites – a few foreign bands seem to have found their way to Russia. While the country cries out for more high-quality modern music, the ability of regional cities to satisfy the demands of rock stars’ riders is often severely lacking.

The Russian music market is fundamentally different from the music scene in Europe. Since the country was entirely closed to world culture prior to 1991, those few artists who were permitted to sell their records in the Soviet Union have enjoyed lasting popularity in the post-Soviet space.

Boney M was one of those rare bands officially allowed in the Soviet Union. At a time when Soviet people were eagerly devouring anything associated with freedom and the West, Boney M songs were being played in discos – this became the band’s passport to lifelong success. Since the death of Bobby Farrell in 2010, Boney M no longer exists; but the three remaining members of the band continue to roam around Russia performing Boney M hits.

The band has performed all across the country, putting on countless concerts in the regions. More often than not, the trio can be seen on stage at closed parties for well-to-do manufacturers and corporate events. They seldom perform in Moscow or St. Petersburg, except at ‘80s-disco-themed shows for middle-aged fans. Normally, these arena concerts include other old-school acts such as C. C. Catch, Pupo, Zodiac, Bad Boys Blue, Soviet sex symbol Sabrina and Dschinghis Khan, who routinely perform their one and only hit “Moskau.”

A number of old rock bands have also made Russia their second home, playing to sold-out arenas of devoted fans. American Brazzaville and Bloodhound Gang hardly ever perform anywhere else. Old monsters of rock, like the Scorpions, Iron Maiden, Uriah Heep and German Udo are also frequent visitors to Russia, performing not only in the two capitals, but also touring the regions.

There is an anecdote in Russia that Paul McCartney was once denied entry into the Soviet Union because Leonid Brezhnev reportedly said: “We don’t need half a McCartney (“Paul” sounds like “half” in Russian), give us the whole one.” Elton John – not yet a Sir at that time – was luckier. In 1979, it took superhuman efforts to bring the star to the Soviet Union, where he gave several concerts in Moscow and Leningrad. It is said that a high-ranking official at Goskontsert agency was first sent to England to make sure that the flamboyant entertainer posed no ideological threat to the builders of communism.

The Iron Curtain fell long ago, but Russia remains a blank space on top stars’ tour radars. Fans have been waiting ages for Radiohead, and U2 have only come to Russia once in 2010, as part of their 360 Degree Tour. Music enthusiasts used to joke that international stars only come to Russia when their careers are drawing to a close and popularity in the West has waned. Yet there is a grain of truth in every joke.

Metallica first performed in the Soviet Union in 1991, and only returned 16 years later, in 2007, after all hopes of seeing them in Russia had been lost. Many thought the band was not what it used to be, but Metallica sang to a full house at Moscow’s Luzhniki Stadium. The concert’s success was largely due to the fact that their Russian fans thought they might not live to see the band come back again. System of a Down came to Russia for a reunion tour only, when fans had already stopped waiting for them. The same holds for The Cranberries.

“This isn’t true,” said Michael Shurygin, the president of the NCA group, one of Russia's largest booking agencies. “Many contemporary artists come to Russia – they make new albums and then go on tour, making stops in Russia. Some of the most recent examples are the Red Hot Chili Peppers, Muse, 30 Secоnds to Mars, Linkin Park – our company booked all of them.”

Before bringing serious bands to Russia, booking agencies monitor the market to find out which artists Russian fans want to see. “In order to see who is popular, we make use of the NCA Friends Club, which has more than 40,000 members. It provides live feedback from the real audience. We also monitor social networks and keep an eye on fan communities of certain artists, to see how much the Russian public is interested in them,” Shurygin said.

While Moscow and St Petersburg are regularly spoiled with international stars, concerts in Russian regions are not so frequent. The regions are either too far from tour routes or fail to meet stars’ rider requirements. Furthermore, the concentration of cultural life in the regions is lower than in the capital, which discourages local promoters from organizing these kinds of concerts in regional centers. Remoteness from the capital really matters, which is why domestic performers are more popular in the regions.

Even so, the situation is not as bad as it sounds, and international stars and the global culture they carry still visit other Russian cities besides Moscow and St Petersburg. Although Madonna and the Red Hot Chili Peppers perform exclusively in the two capitals, Sting, Guano Apes and Korn went as far as Kazan, Krasnodar and even Yekaterinburg. People in the Urals and Siberia are also eager to see their favorite artists in concert, but bringing stars there without compromising quality is often too hard a task.