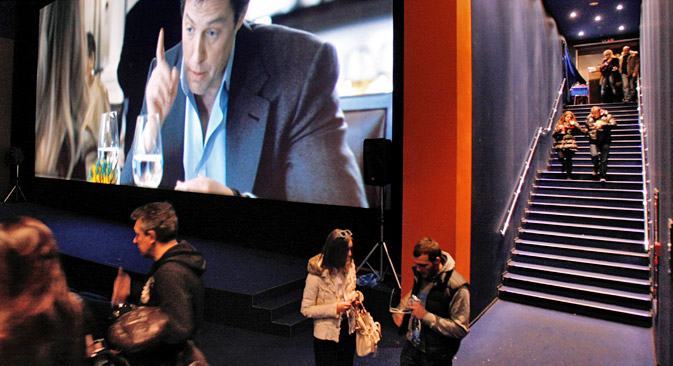 The trailer of the movie, Did You Hear About the Morgans?, screened in Russia's one of the largest cinemas, Oktyabr. Source: Kommersant

The government-owned Cinema Fund for supporting national cinematography is falling short of its goal of increasing the share of Russian films screened in the country’s cinemas.

In 2012, this share is projected to fall again, to 13.8 percent of all box-office receipts. This is why the sector’s government funding will be reformed starting next year, Deputy Prime Minister Vladislav Surkov announced. The government wants the fund to start giving film companies interest-free loans or reimbursing them for interest on bank loans, rather than simply subsidizing producers.

During his meeting with film producers, Surkov reminded them of their own pledges: A year ago they had promised that government support of commercial cinema projects would push the share of Russian films to roughly 18 percent in 2012, with the top 10 companies accounting for about 13 percent of all the takings.

This year, the state allocated $5.4 billion rubles (roughly $174 million) to the cinema industry, including 1.5 billion rubles earmarked by the Ministry of Culture for independent films, debut films and experimental films, and another 3.9 billion rubles received by the Cinema Fund.

The latter used this amount to dole out 2.2 billion rubles (only slightly more than the budget of an inexpensive Hollywood blockbuster) to the 10 leading companies and allocate the remaining money to projects deemed socially important, as well as to children’s films, animation and international offerings. The foundation spent 2.9 billion rubles in 2010 and 3.2 billion in 2011.

In fact, Russian filmmakers will receive a mere 13.8 percent of box-office revenues in 2012, with the leading companies getting 7.5 percent of the receipts totaling 40.5 billion rubles, writes Kommersant, quoting Romir Movie Research.

Three years ago, all the funding was provided by the Ministry of Culture, but that scheme was done away with, as it was considered open to corruption. Following a meeting led by Vladimir Putin, cinema support was focused on the largest companies and funded by a special foundation.

At a recent government meeting, cinematographers were forced to admit that the current government support system was inefficient. Surkov announced that the Cinema Fund would keep operating, but its functions would be completely separated from those of the Ministry of Culture. Right now, the fund’s activities are at odds with its objectives.

“They are distorted,” the deputy prime minister said, adding that, rather than being an economic agent seeking to boost the sector, the fund was actually “trying to be a second Ministry of Culture” — simply subsidizing filmmakers.

At the moment, the fund demands only partial payback: in 2010-2011, film companies had to repay a mere 5 percent of the part of revenues proportionate to the fund’s contribution to the project’s budget. In 2012, this figure was raised to 25 percent for comedies, cartoons and international projects. Even market players are in doubt about the effectiveness of this system.

“Repaying just 5 percent is an economic bluff – it’s nothing,” Surkov told Vedomosti. This is why the fund will now focus on supporting commercial films, while others will be co-funded by the Ministry of Culture.

“It is the Ministry of Culture that determines the policy in the cinema industry: The fund is its economic agent, and the ministry’s influence on it will be increased,” Surkov added.

The foundation is presently run by a board of trustees headed by the first deputy chairman of the State Duma, Alexander Zhukov. The board also includes Minister of Culture Vladimir Medinsky and his deputy, Ivan Demidov.

The transition toward a new funding scheme will be gradual, “so as not to let the system collapse,” Surkov said.

In 2013, the Cinema Fund will continue to earmark about half of the funds received from the government in the form of subsidies. Yet the Ministry of Culture will play a greater role in deciding which projects get the money. The fund and the ministry have yet to work out a model for cooperation.

“Even now, the Ministry of Culture exerts considerable control over the fund’s operations,” said the fund’s Managing Director Sergei Tolstikov. Instead of receiving money directly from the budget, the foundation is financed by the ministry under a special agreement between the two. The fund reports to the ministry quarterly and the ministry can audit its activities at any moment.

“If this control is to be strengthened, then we need to understand how exactly,” Tolstikov said.

He agrees that the foundation has to increase financial motivation for producers, and this includes raising the return on investment.

“The Russian film market really lacks normal competition: Producers compete for financing sources and not for box-office revenues. But I don’t understand who is going to draw the line between commercial and non-commercial films, or how they’re going to do it,” said Tolstikov.

“Free government money spoils Russian films,” said Rafael Akopov, president of the ProfMedia holding that includes industry leader Central Partnership. “Toughening the conditions for financial support will do only good for the market, relieve it from inefficient companies that are not really part of the business, and improve film quality.”

Surkov believes that the foundation can support commercial films through a number of instruments, including three-year loans, financing in exchange for a much higher part of the revenue to pay back, or loan refinancing.

Combined reports based on materials from Kommersant and Vedomosti.