Russia's farmland - cheapest in the world 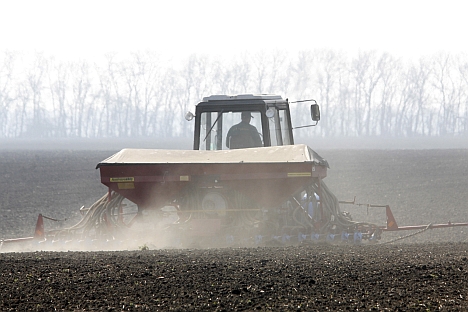 The highest prices for farmland in the Russian regions were found to be in the Krasnodar. Source: ITAR-TASS

Due to low demand, Russian farmland is 5-6 times cheaper than in Europe or the United States. At the same time, it has significant potential to grow in value. The main driver of prices, according to analysts, could be the increasing interest of Western players. Domestic companies are currently laying low, after many had their fingers burned in 2007-2008.

For the first time, prices of agricultural land in Russia and abroad have been ranked by the analytical center SovEcon. The survey took into account the value of land plots that are 2 hectares (5 acres) or more in size, excluding buildings.

"Looking at the data, we can say there's good and bad news," said Sovecon's executive director, Andrei Sizov. "The bad is that supply of land in Russia greatly exceeds demand, while the good is the potential for runaway growth in value."

Sizov cites Western investment, pension and other funds as the main driver of growth in the price of Russian land. Factors taken into account when buying a plot of land include the distance from the sea, the value of agricultural products grown on the land, and the price of those products, including delivery to the nearest port. In other words, investors estimate the potential revenue per hectare, says Sizov.

At the same time, Russian companies are keeping a low profile. Most likely they are still feeling the after-effects of 2007-2008, when they bought up costly land in large quantities and then watched prices drop, says Sizov.

"That was the first stage of mass land banking. But since then, prices have struggled and are still lower now than they were then," he said. After the crisis of 2008, the market remained sluggish, partly due to the termination of grain exports in 2010. There was a brief revival in 2011, but major land buyers were still nowhere to be found.

There is now a new market trend, says Sizov: land swap deals between regions to optimize business. An example is Danish company Trigon Agri's purchase of 70,000 hectares in the Rostov region, through the sale of land it owned in the Volga and Stavropol regions.

"Given the fact that a huge amount of land is not tilled and is turned into woodland, it's just not in demand," he said.

In Russia, besides grain production, investments are also needed in infrastructure for the storage of fertilizers, equipment, and the produce itself. Overall, the amount of additional funding required to develop crop production is far higher than in some African states, for example.

"So much blood, sweat, and tears need to be put into the Russian soil! That's why I believe it to be very expensive," Orlov said.

Market participants also pay attention to the legal aspects of land registration in Russia. "It's hell on Earth," said Orlov. "It's an over-bureaucratized system laced with corruption, incomparable to anything else in the world."

“The procedure to re-register land from shared to private ownership takes at least a year,” said Roman Nikishkin, head of legal operations at Rusmolko. “The work is beyond any one individual, and generally, when it comes to large areas, an entire team of lawyers handles it. But it's worth it in the end. When ownership is registered, the land increases in value several times,” Nikishkin said.