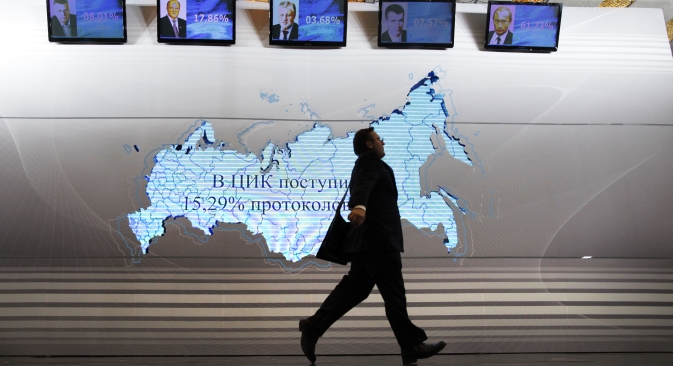 A man walks past a map of Russia and portraits of presidential candidates (L-R) Vladimir Zhirinovsky, Gennady Zyuganov, Sergei Mironov, Mikhail Prokhorov and Vladimir Putin at the Putin's headquarters in Moscow on March 4, 2012. Source: AP

This past year, the Russian public chose a new president, went to protest rallies, followed the Pussy Riot trial, and became used to a raft of new laws, including the introduction of a "black list" of websites.

It was no surprise that, after a four-year hiatus spent serving as prime minister, Vladimir Putin returned to the Kremlin for a third term. He garnered more than 63 percent of the vote in an election with a turnout of 65 percent. The Kremlin hosted the inauguration ceremony in May 2012. In light of earlier amendments to the Constitution of Russia, the presidential term in office is now six years instead of four. 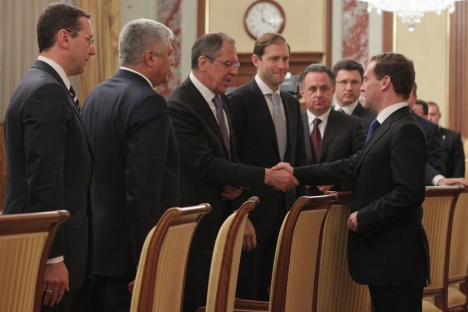 Russian Prime Minister Dmitry Medvedev, right, shakes hands with Foreign Minister Sergey Lavrov as he greets members of his Cabinet in the government headquarters in Moscow, Monday, May 21, 2012. Source: AP

Following his inauguration as president, Putin fulfilled the "gentleman's agreement" between himself and his predecessor. Former President Dmitry Medvedev was appointed prime minister and head of the Cabinet of Ministers. There was no place in the new cabinet for ministers Tatyana Golikova (health and social development), Rashid Nurgaliyev (internal affairs), and Andrei Fursenko (education and science), who had repeatedly come under criticism. 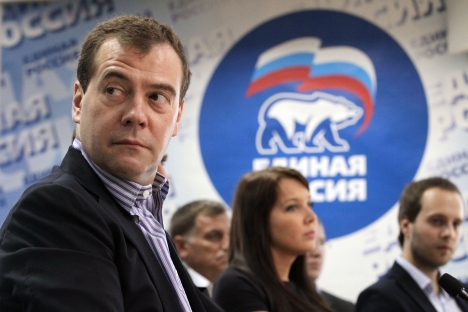 Vladimir Putin and Dmitry Medvedev swapped jobs – and not only in public office. Newly elected President Putin, who had headed the ruling political party United Russia since 2008, offered the position to Medvedev. In May 2012, the Party Congress of United Russia unanimously supported Medvedev’s candidacy. Unlike the currently unaffiliated Putin, Medvedev now holds a party membership card. 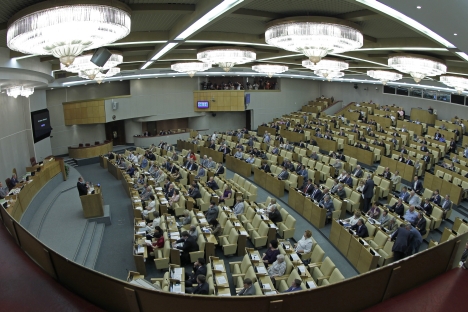 Members of the State Duma, lower parliament chamber, is seen during a session in Moscow, Russia, Tuesday, July 10, 2012. Source: AP

The State Duma of the sixth convocation, voted in during the December 2011 elections, sat in session for the first time in early 2012. The legislative body began its year by passing some far-reaching laws. For instance, members of parliament voted to introduce the status of "foreign agent" for nonprofit organizations in receipt of funding from abroad.

The penalty for treason and divulging state secrets was stiffened. Furthermore, a law was adopted on "black lists" of websites, which cover pornography involving minors, instructions on how to commit suicide, and the manufacture and purchase of recreational drugs. 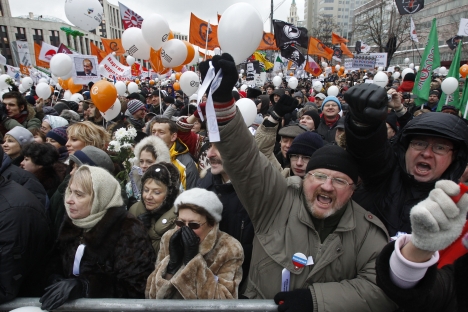 The wave of protests that began after the parliamentary polls of 2011 only intensified after the presidential elections. White ribbons became the symbol of the protest movement. Moscow witnessed protest rallies under the slogan "We're For Fair Elections" on Bolotnaya Square; in addition, there were the "March of Millions" rally, involving tens of thousands, and the "White Circle" protest, in which participants holding hands lined 9 miles of the capital's Garden Ring Road.

On May 6, 2012, a rally of thousands ended in clashes between protesters and police, with more than 400 arrests. Forty members of the opposition and 29 police officers were injured. The event prompted the adoption of a new law that increases the fine for public disorder tenfold. 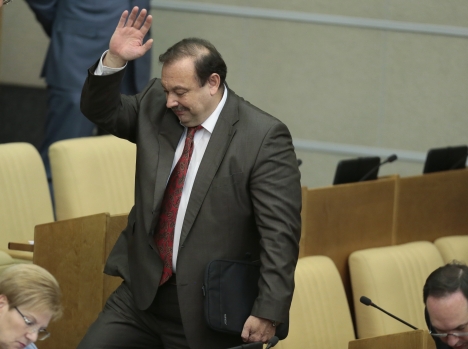 The State Duma initiated a campaign to combat the illegal involvement of Duma deputies in business. The first victim was opposition politician and A Just Russia member, Gennady Gudkov. In September 2012, the State Duma agreed with the findings of investigative authorities and accused Gudkov of mixing politics with business.

He was stripped of his seat in parliament without a trial. Many deputies (mostly from United Russia) were subsequently suspected of similar offenses, but the only one to fall victim was United Russia's Alexei Knyshov. Unable to prove his innocence, he voluntarily resigned from office.

7. The return of gubernatorial elections 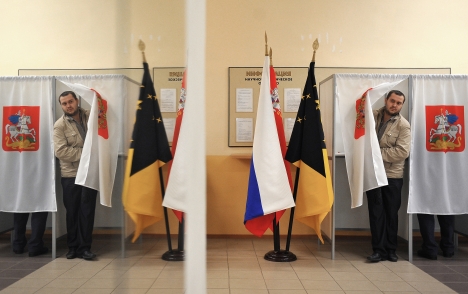 October 2012 ushered in the first gubernatorial elections to be held in Russia for eight years. Under the new rules, candidates for the post of regional leader were "filtered": nominated by their political parties, candidates had to win the support of regional deputies or mayors before facing the electorate. Five regions elected governors in the fall: Ryazan, Belgorod, Novgorod, Amur, and Bryansk.

In each region, the incumbent regional leaders and representatives of the pro-government United Russia were victorious. 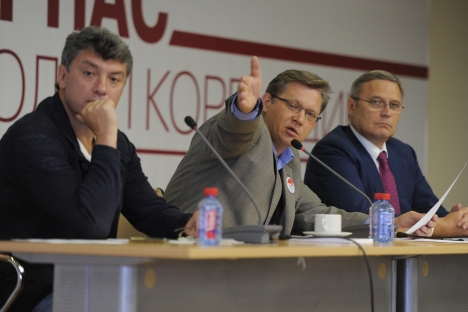 The October 2012 elections welcomed 19 new parties. However, among the newcomers, only RDR-Parnas and Communists of Russia passed the threshold to enter the municipal parliaments of Barnaul and Karachaevsk, respectively. 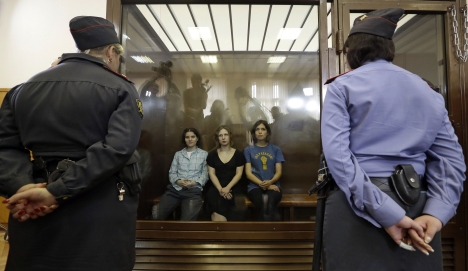 In February 2012, the Russian punk band Pussy Riot held an unsanctioned protest under the slogan "Virgin Mary, Drive Putin Out!" inside Moscow's Christ the Savior Cathedral. The participants themselves described the action as a "punk prayer." Three band members were arrested in March, while the others were declared wanted on charges of disorderly conduct motivated by religious hatred.

In August, Nadezhda Tolokonnikova, Maria Alekhina, and Yekaterina Samutsevich were found guilty and sentenced to two years in a penal colony. Samutsevich's sentence was later commuted to a suspended term, and she was released from the courtroom in October. The Pussy Riot affair marked the start of an attack against the Russian Orthodox Church that continues to this day. 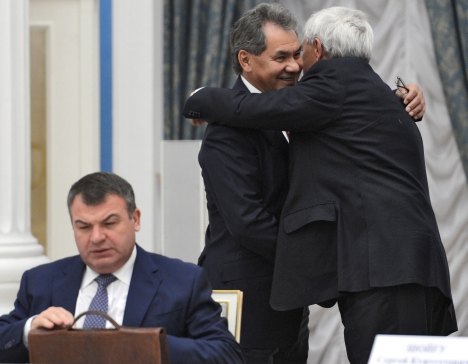 In November 2012, Anatoly Serdyukov, an economist by trade and head of the Russian Ministry of Defense since 2007, was embroiled in a corruption scandal that ultimately cost him his job. The former minister of emergency situations, Sergei Shoigu, who in April 2012 had only just begun work as the governor of the Moscow region, was appointed as the new defense minister.

A long-term resident of the Russian White House, Shoigu has held ministerial portfolios under Boris Yeltsin, Vladimir Putin (twice), and Dmitry Medvedev. His appointment was welcomed by those in various circles of authority.