Russian health folklore and ‘cure’ for the common cold 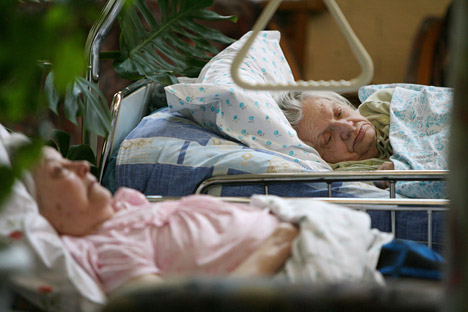 For your every ache and pain, the average Russian will have a wealth of advice to offer - not only about already-evident maladies, but also about preventative care.

Got a headache? Put a cabbage leaf on your head. Toothache? Garlic is your answer. Drinking a shot of vodka will help cure a cold. If you happen to be suffering from an open wound, slap some badger fat on it and your cut will be healed in no time.

Russian culture is packed with folklore about health and wellness. For your every ache and pain, the average Russian will have a wealth of advice to offer - not only about already-evident maladies, but also about preventative care.

Some of these beliefs are so fiercely held that Russians (pushy babushkas being the most infamous demographic) have earned a reputation for approaching strangers in the street and heatedly scolding them for acting in an "unhealthy manner."

Such offenses can be as arbitrary as reading a book on a cell phone, which, according to the scolder, will damage your eyes. A parent can get reprimanded for letting their boy's hair grow too long, which might be a sign that his hair will fall out later.

For Russians, sitting on a "cold surface" - which might mean snow, but also includes stairs or the ground, even during summertime - has the potential to be quite harmful to a woman.

"Sitting on [a cold surface] is dangerous because there is a disease, a urinary tract infection [UTI], that you can catch," Irina Sokolskaya, a middle-aged Moscow housewife, told The Moscow News. "It's an anthropologist's disease, by the way, because in their work they have to sit on the ground often. If you sit on something cold you can catch a UTI and it stays with you for the rest of your life."

If left untreated, UTIs can cause permanent bladder and kidney damage or even female infertility. As such, sitting on a cold surface is regarded in Russia as highly dangerous to ladies' health, and emotions on the topic can run hot.

The "cold surface" idea is not even the most unexpected bit of Russian health advice. Other Russian doctors have attracted national notoriety for their unique takes on home treatment.

Naturopathic healer Pyotr Popov created a YouTube sensation with a video suggesting that one should treat hemorrhoids by inserting a freshly-bitten cucumber up the anus. Folk healer Gennady Malakhov has written extensively on the benefits of urine therapy, advocating urine massages and urine enemas for bowel cleansing. For years, Malakhov even had a popular morning talk show on Russia's Channel One about healing practices.

With advice like this, it can be easy for sceptics to dismiss Russian ideas about wellness entirely. Having Gennady Onishchenko as the country's chief health inspector doesn't help.

Onishchenko, the nation's lead spokesman on matters of public health, is known for his creative and often hilarious medical advice. Whether it's blaming drunk driving on kefir or expounding on the dangers of foreign cuisine - advising Russians to stick to a "patriotic" diet of meat, cabbage and potatoes - Onishchenko's colorful public statements are often the subject of light-hearted jokes even by Russians.

The medical disconnect between Westerners and Russians is partly just a difference in culture, said Dr. Alexander Shestov, a doctor at RIA Novosti's Moscow office.

"People in Russia don't like to come to doctors. It's only a last resort, even in recent years," Shestov told The Moscow News. "They try to do what they can at home. But sometimes classical medicine doesn't work, and that's where I come in."

Russian culture is deeply steeped in tradition and superstition. These ideas naturally extend to healthcare. Professional clinical care, until recently, was largely unavailable in small villages and the countryside.  As a result, home remedies remained popular.

The reason they've stuck around in the 21st century, meanwhile, is political.

Russia's health care system remains strikingly underdeveloped. People in need of medical treatment often seek it abroad, if they have the means and ability. Even a professed patriot like Children's Rights Ombudsman Pavel Astakhov flew his pregnant wife to France to give birth at a European hospital. With few accessible doctors and modern health care facilities available, Russians turn instead to home remedies.

The science of home remedies

However silly home treatments for toothaches or open wounds may seem to outsiders, though, they generally have scientific basis.

For example, the belief that sitting on cold surfaces can lead to a UTI is based on fact, said Dr. Lyudmila Melnik.

"The cold suppresses [the immune system]," Melnik, a physician at the American Medical Center in Kiev, explained. "If you sit in snow or on cold stone, you have a lower local temperature, which makes this area [on your body] weaker. You have a lower local immunity toward microbes."

The theory has been supported by empirical research. A study by researchers at the University Of Michigan School Of Public Health, published in 2001 by the Journal of Clinical Epidemiology found that, among women aged 40-65 in Michigan and Israel, "a recent episode of cold hands, feet, back or buttocks lasting longer than 30 minutes" was a significant factor in increased UTI risk.

Other common Russian health advice also enjoys widespread support among the alternative medicine community. Vodka (besides being an antiseptic) can also provide congestion relief, treat poison ivy and jellyfish stings, and repel insects. Garlic acts as an antimicrobial and can lower blood pressure and cholesterol.

And it's worth noting that Western medicine has its own weaknesses. Overuse of antibiotics, for instance, can cause a decrease in their effectiveness plus other side effects.

"I've worked with Americans for 17 years, and between them, there are many more allergies because [Americans] start their life with antibiotics," Melnik said.

The next time someone suggests you take a shot to get rid of your cold, then, you might want to take them up on it.