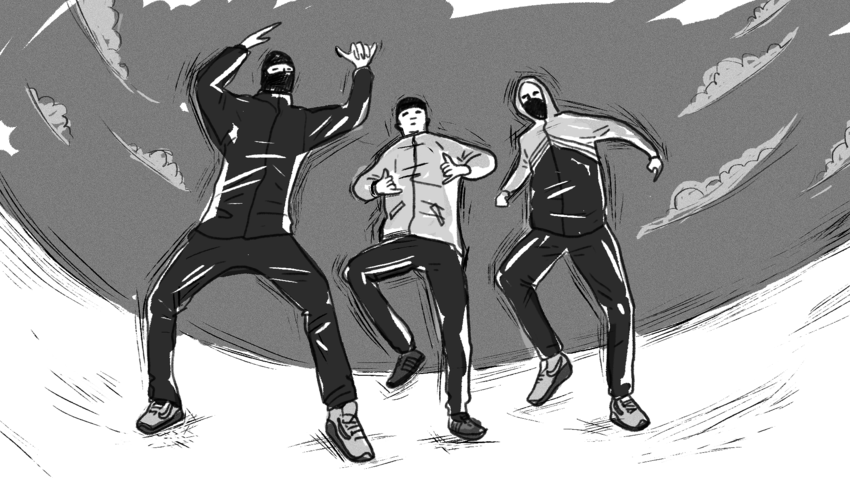 Cheeki breeki! Hard bass is right here and you can hear it. Even if you seriously don't want to

Natalya Nosova
It all began as a kind of joke that went too far – four guys from St. Petersburg were trying to mock stereotypical gopniks (low-life Russian thugs) but wound up winning their praise instead, and then the whole thing went viral worldwide.

You have most likely seen it, at least in a video. A couple of men and occasionally women dressed in tracksuits, their faces often covered with masks or balaclavas, gather in a circle and move their bodies (or sometimes just their heads) to very loud and primitive music with distinctive basslines and a fast tempo. The whole picture is picturesque as hell.

Forget about ballet. In the 2010s, it was a uniquely Russian form of music called hard bass that conquered the world. But before this, it found its way to the hearts and ears of thousands of Russian people. In a very strange way.

As often happens in Russia, people took something foreign and then Russified it all the way to the bitter end. Hard bass traces its roots back to pumping house, a Western-born genre of techno with a speedy tempo and rhythmic bass section (Klubbheads are a good example of pumping house). But then it ran into some serious Russian culture phenomena.

Ironically, for the inventors of hard bass, combining Western rhythms with the tracksuit outfits worn by  (petty thugs or scallies) was just the way to have a laugh. As Lenta.ru put it, the hard bass movement was originally intended as of the “rave ” who would attend big rave parties but had no idea what rave culture was originally about (peace, love techno).

And so it was that in 2010 four young people living St. Petersburg posted a video on Youtube making fun of the ridiculous dancing of  – moving your ankles around and stomping your legs back and forth. While dancing, it is also important to make a special gesture with your hands clenched into fists and only a thumb and little finger protruding.

The “song” that they performed to was pretty simple: “Raz--, hard bass!” (something like “Hey-hey-hey, this is hard bass!” in English) but it also contained a bit of healthy lifestyle propaganda. The guys mentioned that their archenemies are various kinds of chemically produced drugs and that they drink only kvass. Of course, this too was a joke making fun of ’ pride in their supposedly healthy lifestyle – healthy primarily in the sense that they wear tracksuits every day.

Perhaps the irony was too subtle though because many actual who watched the video didn’t pick up on it and related to it on a sincere level. No drugs, a simple dance music to trample the ground to – what’s not to like? And so it was that this strange new style, intentionally extravagant and absurd, began to grow in popularity.

With time, the situation grew pretty complex, with two separate types of hard bass fans emerging – those who sincerely liked it and those who were making fun of it. Sometimes the line between them was (and is) very thin, so now when you see the latest funny video with a bunch of people dancing to hard bass in tracksuits, it is hard to tell if they are serious hardline or just fooling around.

The hard bass fan site hardbas.ru tells us “It is the pursuit of positive energy and unwillingness to fool oneself with drugs that behind the hard bass philosophy. Hard bass will help make your life brighter and more positive.” That seems a tad pretentious, but who we are to judge?

Then all of a sudden, the author veers off in a dubious political direction: “In many cities, is also a Russian alternative to Lezginka (a national Caucasian dance that people of Caucasian origin sometimes perform in the streets).” There are right-wing activists among hard bass fans, and in 2013 they even tried to perform “a hard bass protest” dance in the center of Moscow but were detained by the police.

Nevertheless, is, as a general rule, not about politics. It helped Russia draw attention from the West, albeit in a strange way. Numerous Youtube bloggers now mimic the Russian accent and explain how to behave like a true Russian  (a more respectful term that  use to describe each other) by squatting, consuming sunflower seeds, wearing Adidas tracksuits and, of course, dancing to some high-quality hard bass. Just remember that this all started out as a parody.

If you want to know more about the world of Russian (not exactly a Wonderland, but still), read our article on the story of tracksuits. And if you're already hardbassed like hell and can't take it anymore, rest your eyes on something more classic, like contemporary ballet.