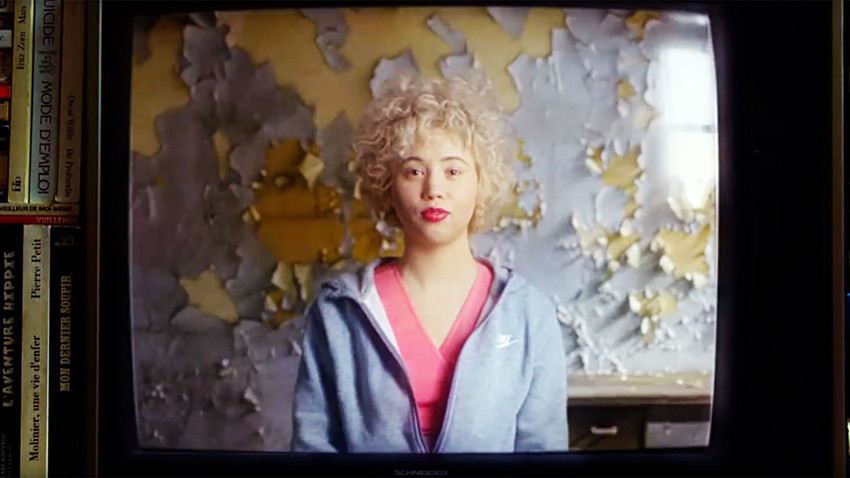 Gaspar Noé/Rectangle Productions, 2018
Gaspar Noé’s ‘Climax’ dramatically changed the life of 19-year-old Sharleen Temple. Before the film she didn’t have any plans for life and just danced like a rolling stone from Siberia to Prague and Paris.

A 19-year-old vogue dancer from a town in Siberia, Sharleen was the first dancer to agree to take part in the project. “It was when I met Sharleen Temple ... when I decided that there should be a Russian character in the film,” Noe told Russian Interfax (link in Russian).

“I don’t care about the nationality of my characters, their skin color, sexual orientation, or their background. The key thing that I was looking for is for them to be exceptional dancers, the best in their field. And Sharleen was like that. was the main language of communication in the film,” he said.

Speaking to Russian media (link in Russian), Sharleen said she was born and raised in a Siberian town, but opted against revealing its name. Since her school days she’s been fond of dancing, especially street styles like hip-hop and house, and at some point discovered vogue - a modern house dance that evolved out of the 1960s Harlem ballroom scene.

In 2014 she visited a vogue event in St. Petersburg and made up her mind to leave her hometown. “I didn’t have any future there so at the age of 15 I moved to St. Petersburg.” There she danced, had fun, and was eventually invited to join the “House of Ebony” (“Houses” are like dance crews in the vogue genre of dancing).

“I was happy: having only done vogue for six months I got my own ‘house’! I think this happened because I’m simply awesome,” she said.

A few years later, at the age of she graduated from high school and told her parents she wanted to study in the Czech Republic. “My parents didn’t care, they said: ‘Do what you want.’ I studied at high school, but after some time I got depressed - the city (St. Petersburg) was beautiful but very grey...As soon as I graduated I went to Prague: I dreamed about living in Europe and the Czech Republic was the cheapest option,” she said.

“To tell the truth, I simply wanted to travel around Europe, the cheapest way possible. I attended classes and really did learn Czech. But the Czech Republic isn’t very cool: if you’re an ambitious person, don’t go there!”

From time to time Sharleen visited Berlin and Paris that, as opposed to Prague, had a lot going on in the vogue dancing scene. “There I felt great, but after coming back to Prague I got depressed again because nothing happens there! All dancers there are commercial and they don’t have money so they work as waiters. they consider themselves ‘stars.’”

Even though she participated in events and even organized her own ballroom event in the Czech Republic, Sharleen didn’t earn much from dancing either.

“Participating in ballroom events isn’t about winning money, it’s only about expenditures!” she admits. “Sometimes there are events offering cash prizes but only once did I win 300 euro - which was awesome! I spent it in a week. I had to work part-time in a cafe.”

Sharleen met Noe during a vogue ballroom event in Paris. “I won the Woman Performance award and he came to me and started saying something...I was in a hurry … so I simply told him my name and asked him to write to me on Facebook. He somehow found my email and dropped me a message. I was in Paris for a week and we met a couple of times,” she revealed.

Sharleen didn’t know much about Noe and hadn’t his famous works like the Void but she was open to discussing the director’s ideas. “I didn’t really believe that I was going to star in the movie until the shooting began,” she recalled. “Initially, he just told me that ‘We are going to do a movie and Sofia Boutella (a French-Algerian dancer) is going to be in it, but we still don’t know what it’s going to be about.’”

Shooting began at the end of 2017 and, as Sharleen says, it only took January and February to finish it. “I knew the majority of dancers who participated in the film so we got along quite well. There were other people who didn’t speak English - with them we simply danced. All the film crew didn’t speak English too.”

“The crew was all French and it sometimes got weird because they would ask you something and I simply didn’t understand. There were many tough moments during the film but we got paid for it so it was all good! I like to do weird stuff and I tried to do film projects in Republic so I liked the experience a lot.”

“I got a new offer during the Cannes Festival, but it’s a secret for now,” she said. She now lives in  Los Angeles and is waiting for a work permit. She has no intention of coming back to St. Petersburg: “I don’t plan to return to anywhere. I only plan to move forward.”