Overcoat man, or how one artist became a successful art dealer without a gallery 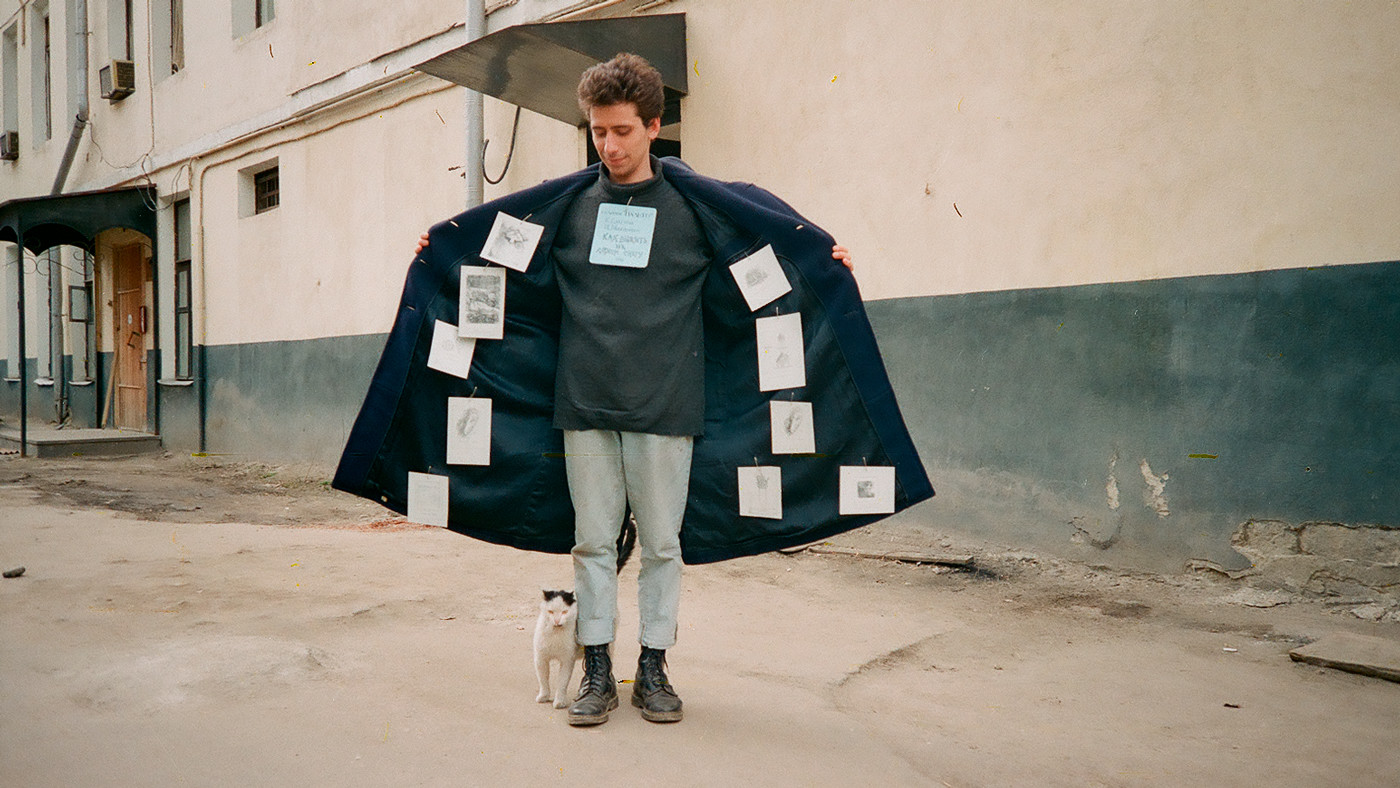 Press photo / I.Makarevich, E.Elagina, 1996.
Everyone in the art world of Moscow and St. Petersburg knows Alexander Petrelli. The artist turned 50 this month, and his "gallery on the move" recently began touring in Europe.

At exhibition openings in Moscow and St. Petersburg you will often see a man who wears a coat all year round. Making the motion of an exhibitionist exposing himself, he opens wide the flaps of his coat to reveal…art. The lining of his coat is always covered with small paintings or drawings, just like the walls of a museum. This is the itinerant Gallery (“Overcoat Gallery”), which has been in existence for over 20 years now.

The gallery consists of just one man, the fun-loving artist Alexander Petrelli. Originally from Odessa, he moved to Moscow in the 1990s. Around this time people started calling him by the nickname “Karman” (“Pocket”), which has stuck ever since become like a second name. He shows up in his coat at major museums, including the Pushkin Museum of Fine Arts and the Tretyakov Gallery, as well as exhibition openings at gallery spaces. 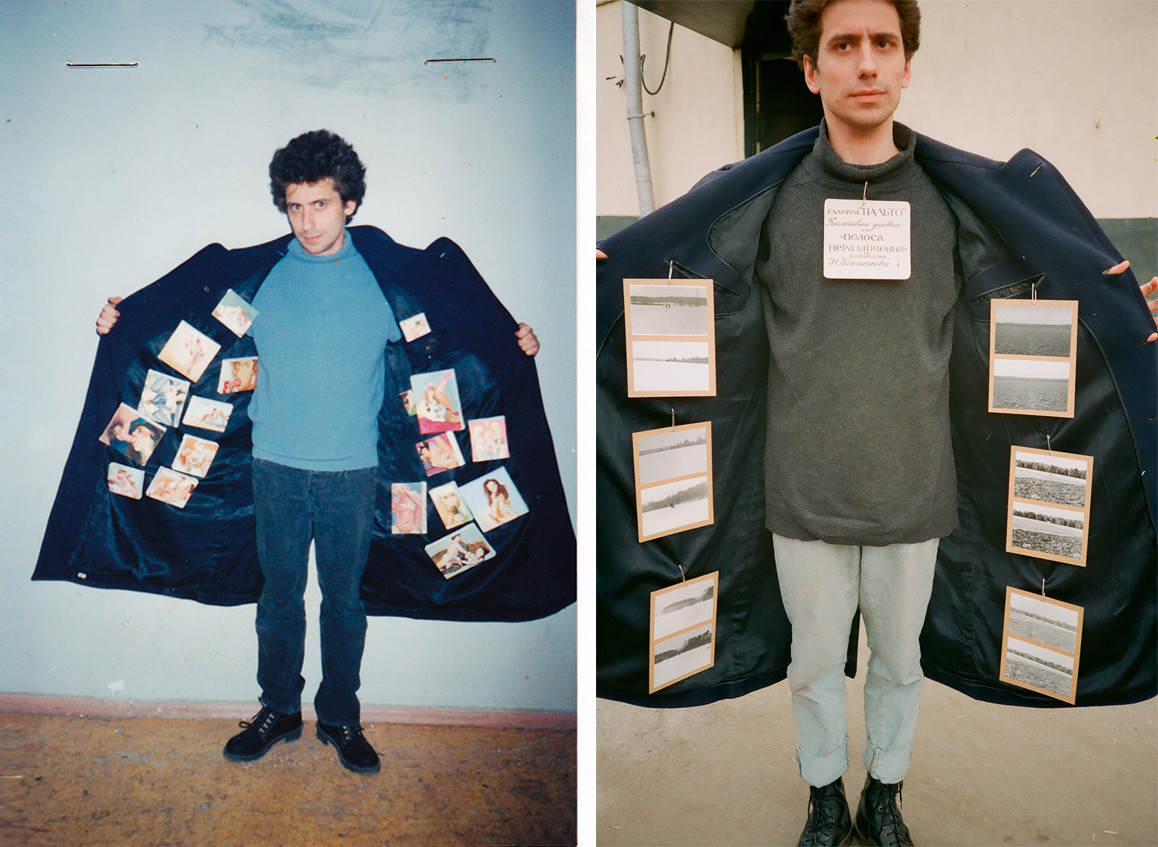 Karman's itinerant gallery, which started as an ironic performance, is one of the longest lasting exhibition spaces on the Russian contemporary art market. Only a handful of galleries in Moscow, fewer than the fingers of one hand, have survived from the mid-1990s to the present day, and is one of them. With over 500 exhibitions over the past 23 years and more than 130 artists who have created works for it—including classics such as Viktor Pivovarov, Vadim Zakharov, Andrei Filippov Zurab Tsereteli—this must represent an absolute record

s has become a traveling gallery. For example, Petrelli beat his own record at the Austrian contemporary art fair Viennacontemporary by staging an exhibition that lasted just three minutes and featured two dozen palm-sized conceptual canvases by Dmitry Gutov. 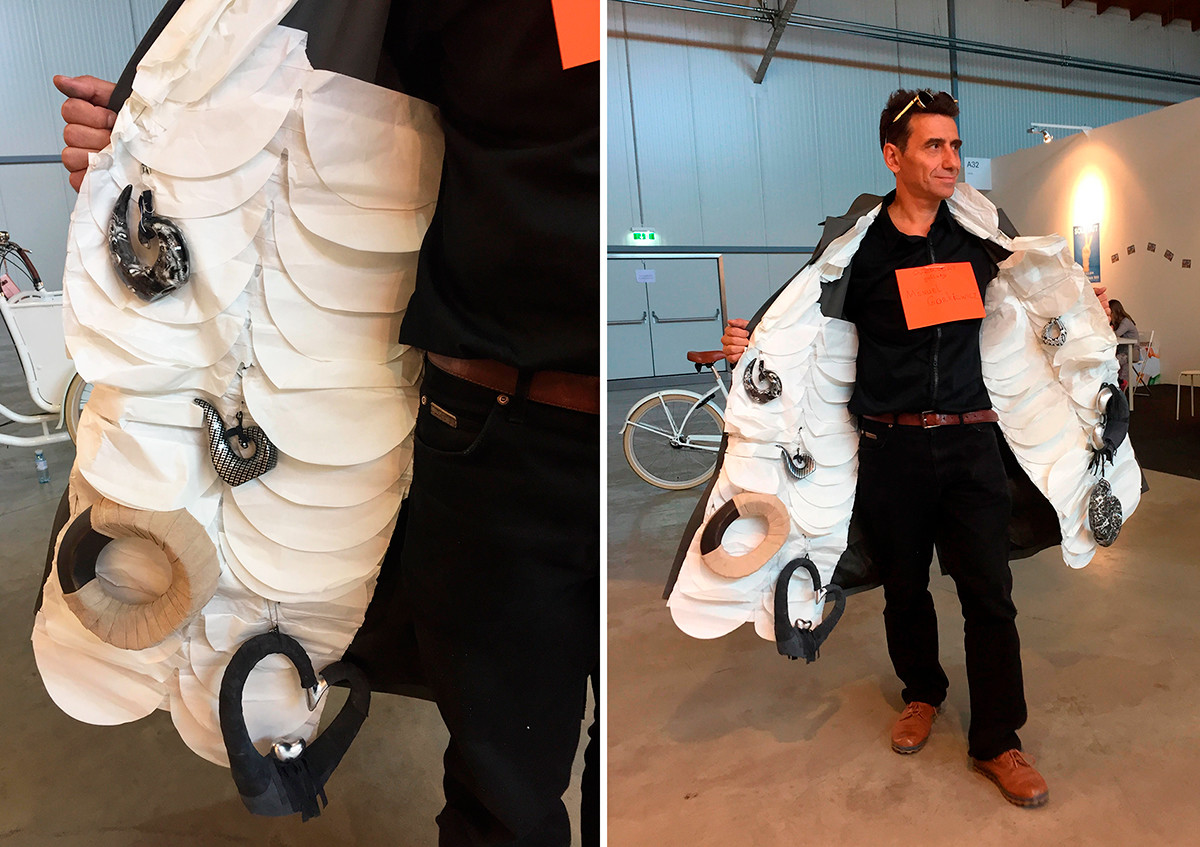 "The only artist whose works I sold in Vienna, not to a Russian collector but to a chance client who didn't have the slightest idea about Russian art, was Aidan Salakhova," Petrelli told Russia Beyond. "It was a work of graphic art on tracing paper with two sheets superimposed, and the image changed depending on which side you were looking at. I just put them on and came out—and there he was, sitting on a small sofa in front of me. An Austrian, with a very genteel manner and a cane. As soon as he saw the works, he grabbed them! He didn't even ask who the artist was."

In Vienna, Karman also sold works by the famous Austrian art group Gelitin. At 30 x 40 cm, their pictures are quite large by the gallery’s standards. He says only two of them sold, but for an the gallery could only have dreamed about in its early days.

An exhibition on the move

The story of began in 1995. Members of the (“Peppers”) art group originally came up with the idea. "They returned from Sochi,” Petrelli recalls. “We were sitting and drinking, and suddenly started reminiscing about the old Soviet comedy film Ivan Vasilievich: Back to the Future. In it, one character was secretly selling radio parts, attaching them to the lining of his jacket. And they say to me, ‘Sasha [short for Alexander], let's open a gallery in your coat!’ At the time I had a heavy old thick woolen dark navy coat, which I had bought in a secondhand shop. I used to wear it then." 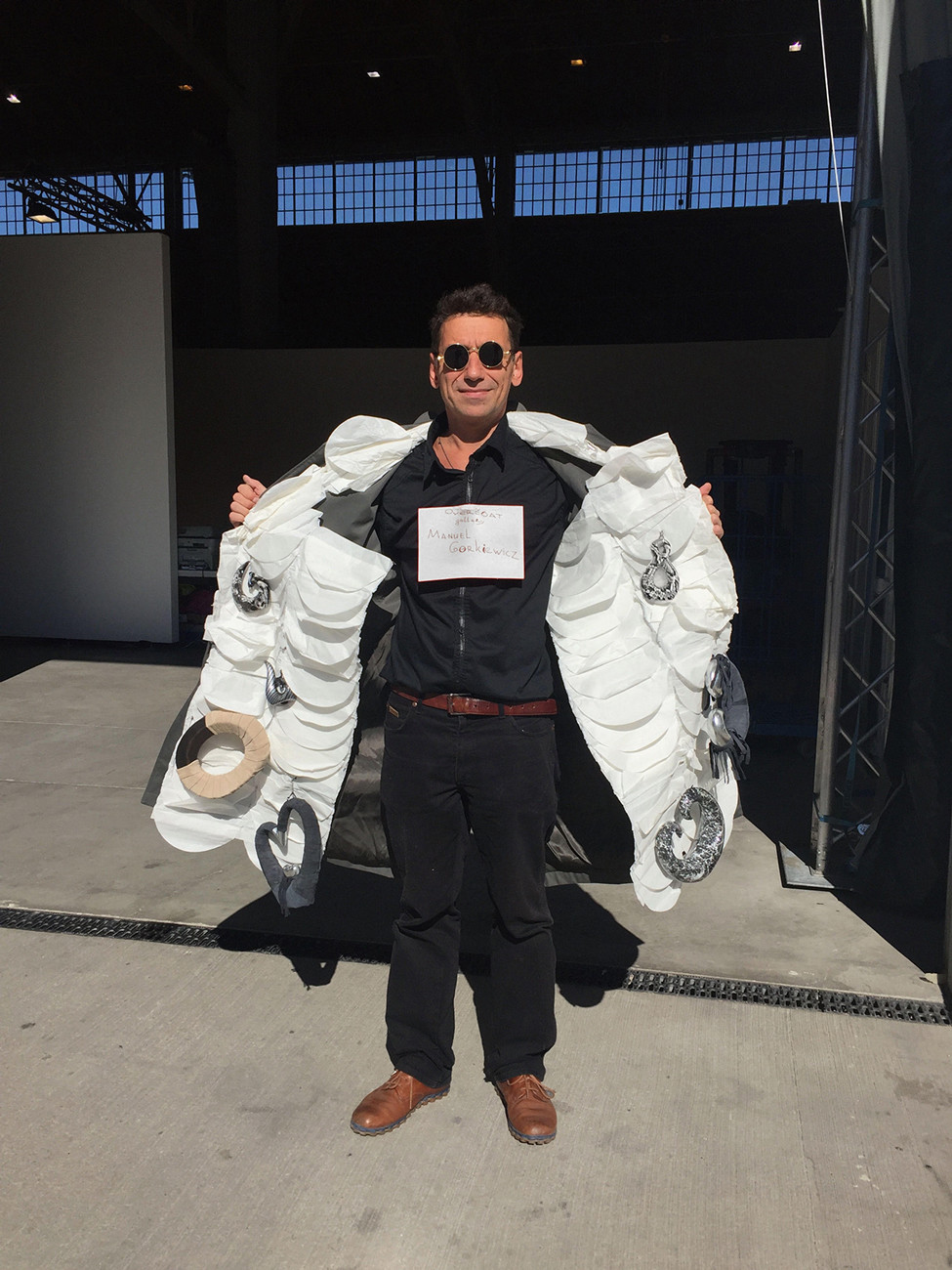 This is how the idea of an itinerant museum, first put forward by Marcel Duchamp, came into existence. Vladimir Dubossarsky and Alexander Vinogradov, two important figures in today’s contemporary art scene and at whose exhibition the gallery opened, were very excited about the idea (they were not yet famous then). At the time, the Petrelli Coat made an appearance at an exhibition that had opened in the luxurious—and now long-since defunct—Manhattan Express club. The main exhibition was called Art Against Sex, while exhibition was called Art for Sex. This caused a scandal when someone complained to the club’s owner, who wanted to shut down immediately. In the end, they managed to reach a compromise: Karman would be allowed to walk around with his coat wrapped around him, but if he wanted to show someone something he would have to take them to the bathroom to do so. 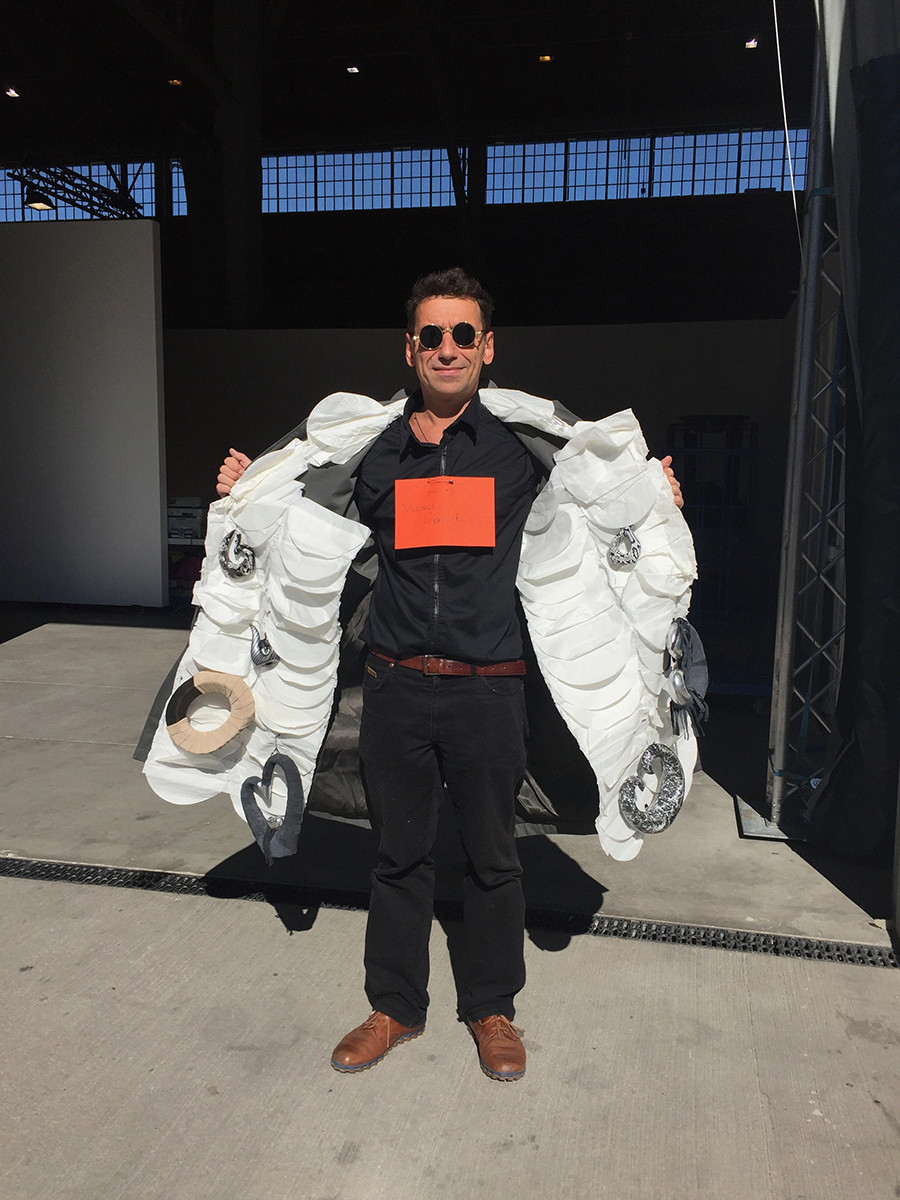 "Today we can be honest,” Petrelli says. “At the time, the concept didn't work. No one bought anything. But later, the whole exhibition—the first solo one for the Dubossarsky-Vinogradov duo — was sold by its authors for 30,000 euros!" sales have gone up since then as well.