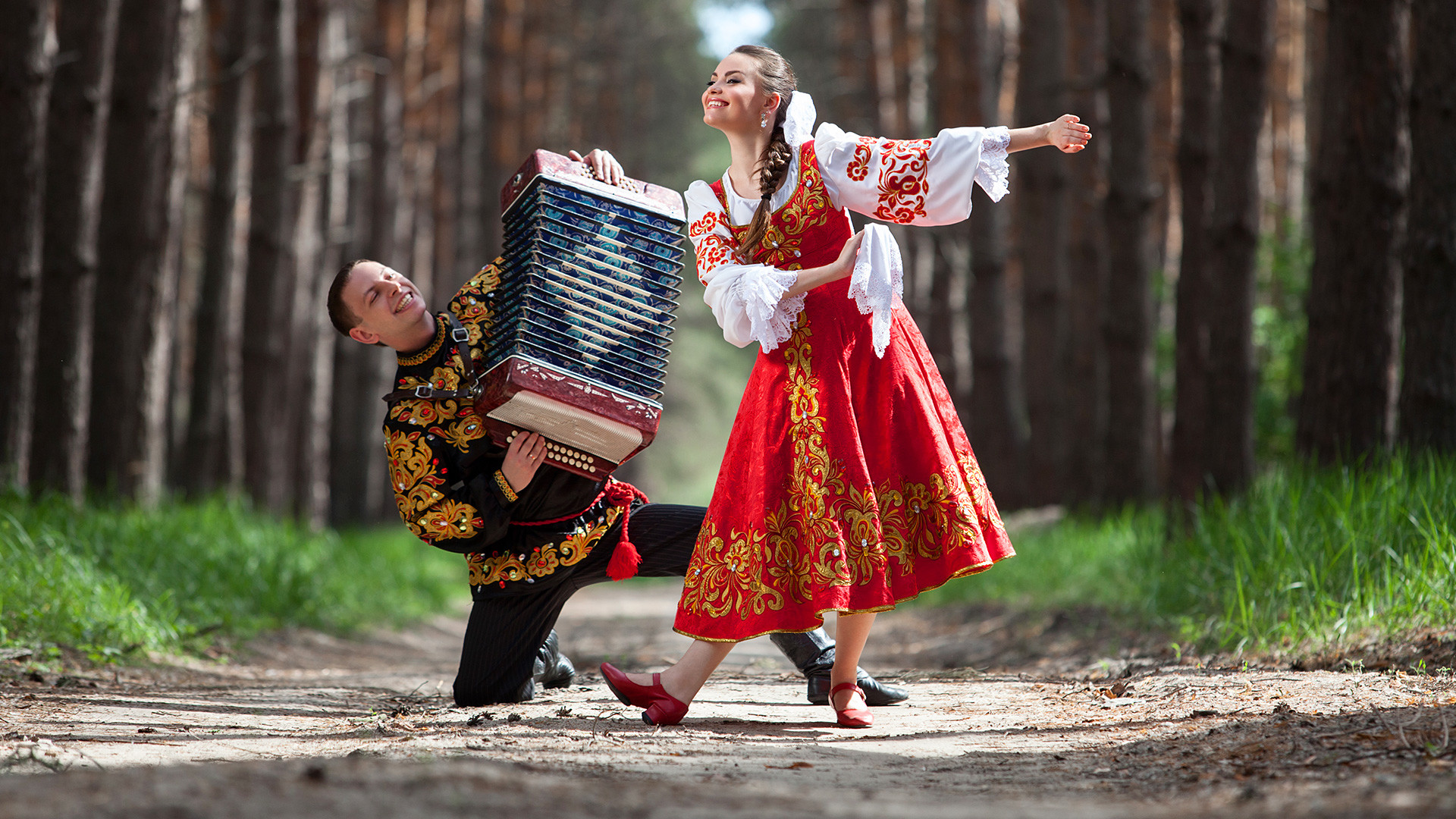 Getty Images
This is not only one of the most favorite Russian musical instruments, which is perfect for performing folk songs and singing at the dinner table, but it also reflects the diversity of the Russian soul.

“Banya, vodka, accordion and salmon”... this verse from a popular Russian song has become an aphorism and a national cultural code. We say it when we want to laugh and emphasize that something was done in a very Russian way. We also laugh at ourselves pretending that “banya, vodka, accordion and salmon” is almost everything we need and tenderly love (only birch trees are somehow missing in this phrase).

Originally, this phrase comes from a song by LUBE, Vladimir Putin’s favorite musical group! They perform patriotic songs (including those about birch trees) which Russians like to sing at the table while drinking. This particular song is called ‘Stop fooling around, America,’ and ironically calls upon America to ‘return Alaska’. It also emphasizes that Siberia and Alaska are alike - both have “banya, vodka, accordion and salmon”.

Banya and vodka are clear, but why the accordion?

To express what this musical instrument means to Russians, we need to turn to another singer and songwriter - Igor Rasteryaev. He plays the accordion, singing his songs, and became enormously popular on YouTube (gathering tens of thousands views).

He sings about ordinary people - combiners, truck drivers, rural folk - and he shows how their lives differ from urban residents. Rasteryaev is certain that even when a very serious man listens to the accordion he too can start dancing to the light motifs and won’t care about what others think, as well as ignore the accepted rules of etiquette.

One of his songs is about the accordion, and it’s an anthem for this instrument that says it stirs and excites the soul of a Russian. Rasteryaev compares accordion music with a horse galloping forward (which is also a symbol of Russia and the race of its reckless but inspiring history).

The accordion is as diverse as Russian history itself. It can both “walk with Ivan the fool” or “howl the bass like Yermak [the national hero and explorer of Siberia]”.

And it’s good enough both for peasants working in fields or prayers under the church’s golden domes.

There are several types of favorite accordions

Russian tradition has a variety of instruments based on the same principle of squeezing in and drawing out the bellows. All of them are usually called ‘garmon’ (гармонь):

1. Accordion - this one has keys, and it isn’t originally Russian. But it is considered to be the most complicated in terms of learning to play. 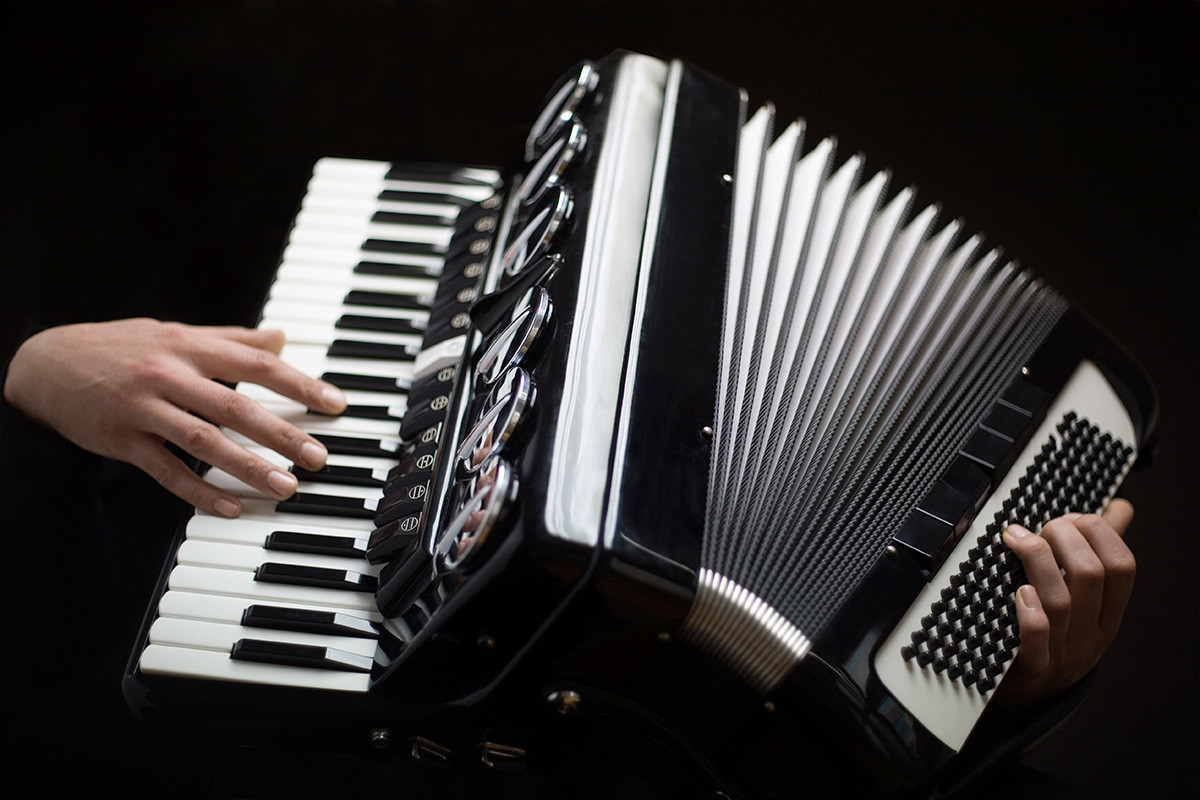 2. ‘Bayan’ - is a diatonic button accordion, and the most popular among amateur players. Originally created in Germany, this type of squeezebox appeared in Russia in 1892 and was modified with a special 'Moscow' button board. Bayan is also included in the orchestra of Russian folk instruments alongside domras, balalaikas, gusli and different types of wind and percussion instruments. 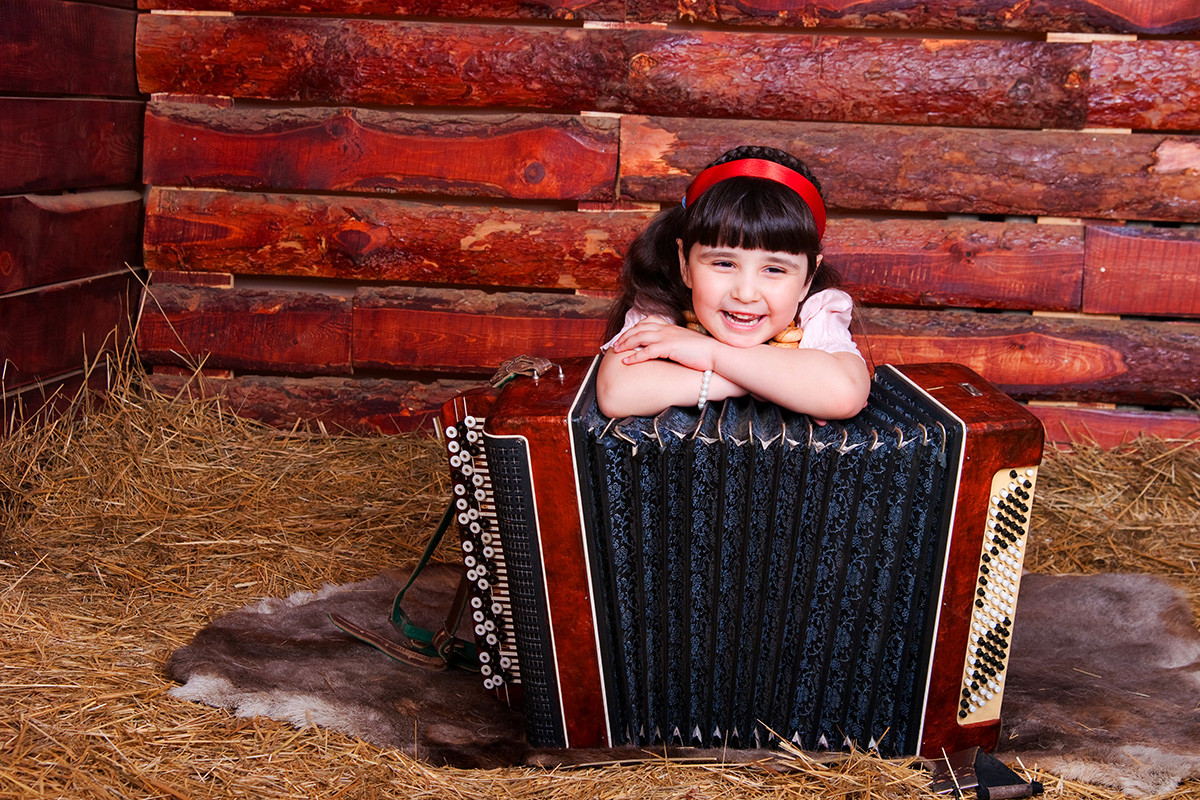 3. ‘Garmoshka’ - is actually the diminutive name of ‘garmon’, a general name for squeezeboxes. Garmoshka is most similar to the concertina, and it is the smallest and has a few buttons. 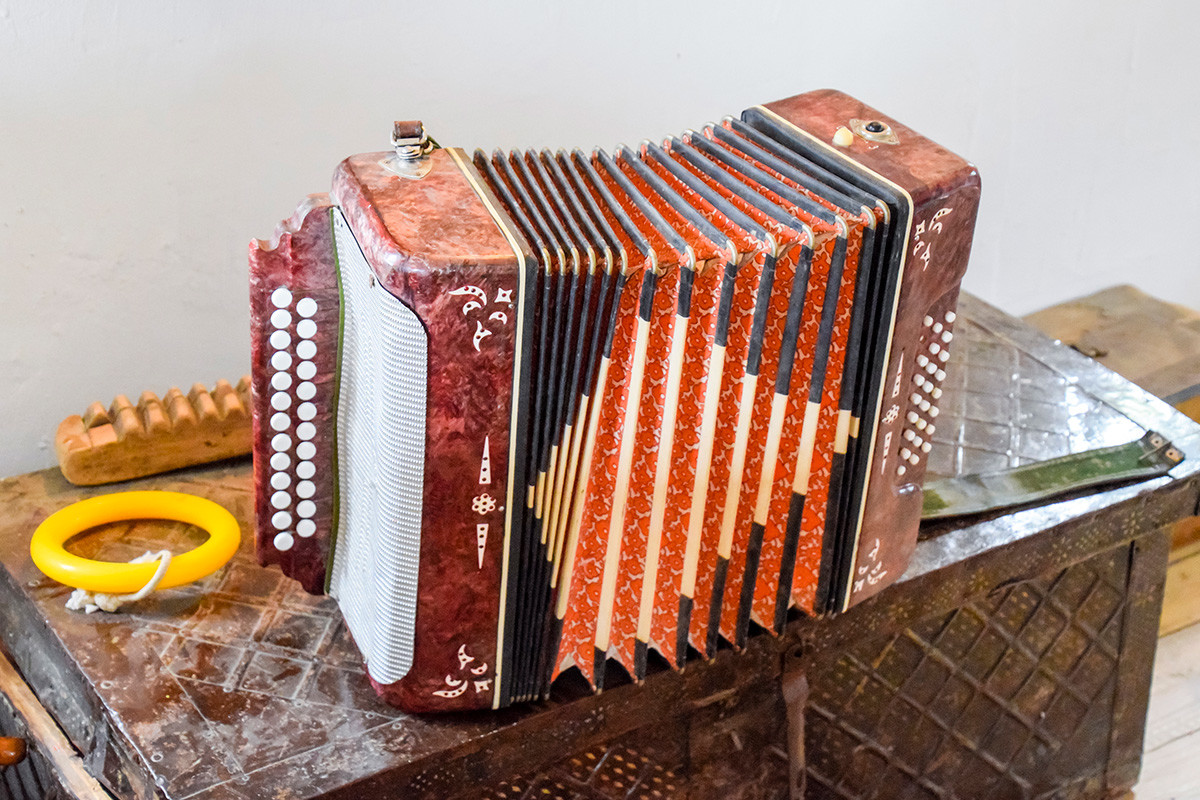 It sounds higher and is commonly used for folk ditties and among couplets performers.

Their scenic images are now taken by the modern duet, which performs for humorous TV shows using the same motif for their couplets.

Perfect for both feasts and funerals

There is a Russia aphorism: “We broke two bayans at the funeral of my wife’s mother”. This means that we were playing very energetically and had lots of fun. (This regards the fact that a wife’s mother is a frequent butt of jokes, usually referred to as an angry woman who is never satisfied with herdaughter’s husband, and then goads him and makes his life unbearable). 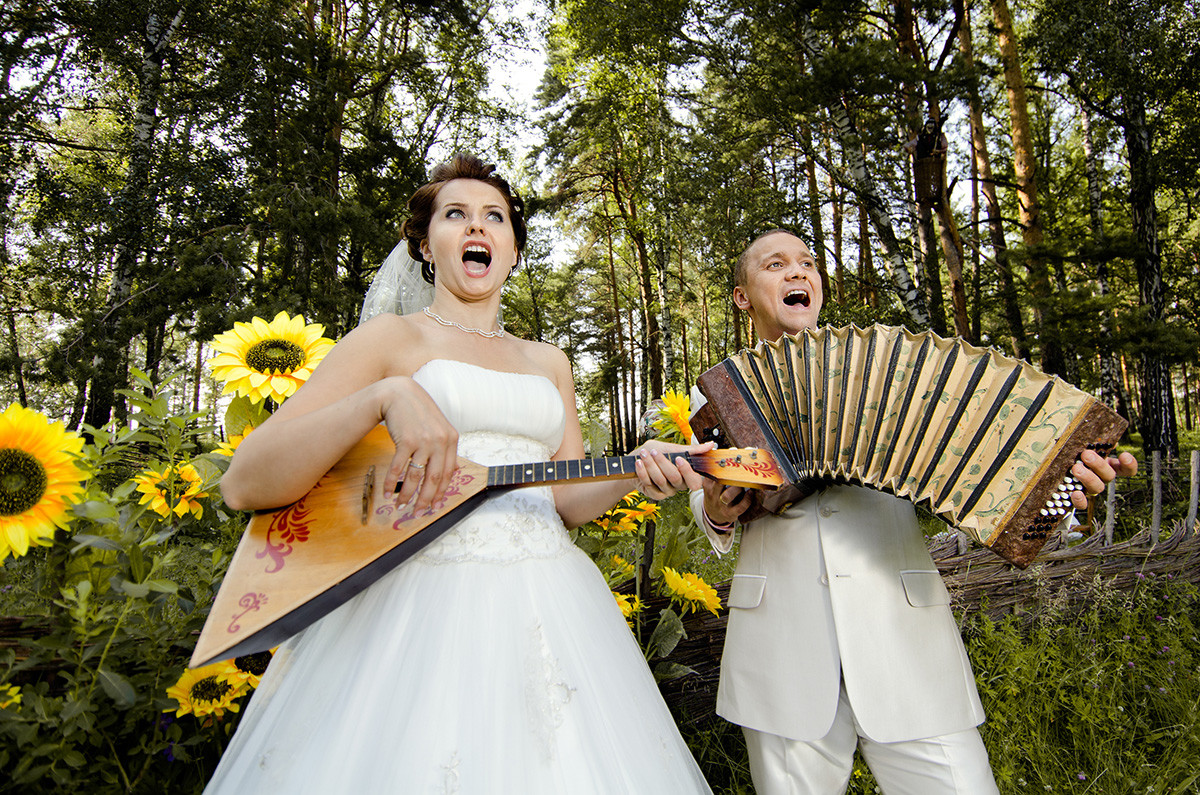 The bayan and garmoshka have always been the main guests at all folk festivities, especially in the villages. And those who can play the instruments are normally considered the most popular (“the first guy in the village”), and often enjoy the loving eyes and ears of local women. In turn, this female attention inspires a player to compose new songs and to perform with even greater finesse and energy. 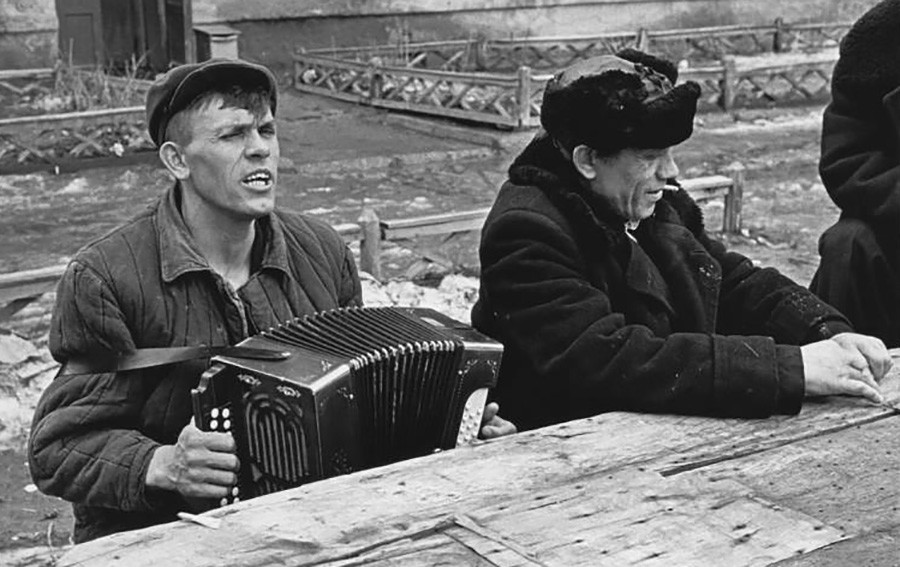 The instrument is equally perfect for joy, energetic songs and chastushki, Russian folk ditties and couplets, as well as for the shrill and folksy compositions that are so beloved by Russians.

All three types became extremely popular during World War II, and were encouraged by the authorities who wanted to raise the morale and fighting spirit of soldiers, as well as to make their life more cheerful. Several tens of thousands of bayans were sent to the frontlines so that soldiers played them. Later, after the war the instrument retained its popularity, and by the 1970s about 700,000 bayans and garmoshkas, as well as 60,000 accordions were produced annually.

Since 1986 and until the present, Russia's main TV station continues to send its camera crews to very remote places across Russia. Their footage ends up in weekly broadcasts of the TV show, Play, garmon, which shows the many talented people who play the accordion.

Modern musicians also compose accordion covers on folk songs that are popular among the older generation.