Russians in lockdown: How to recreate these world-famous paintings (PHOTOS) 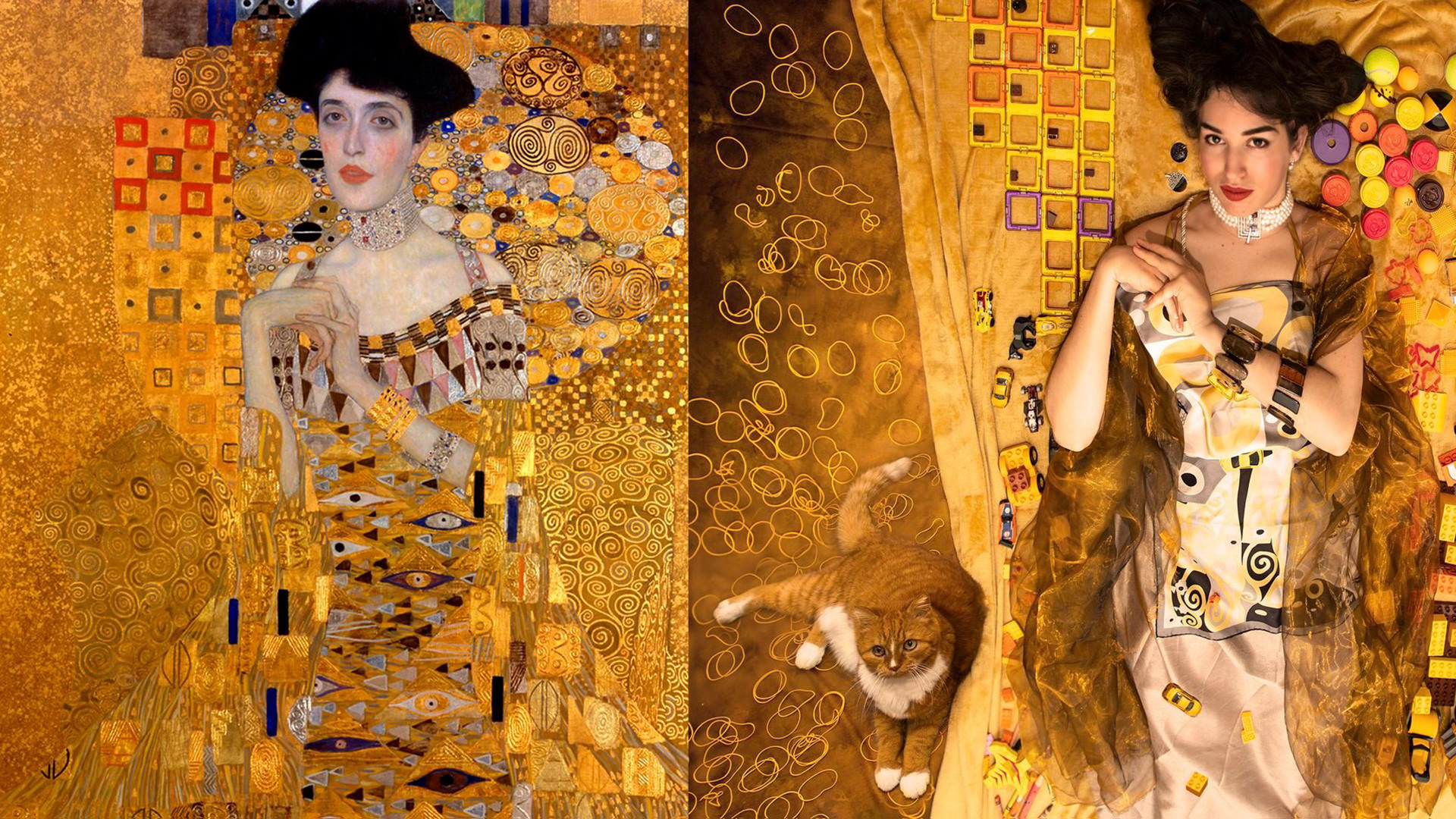 Tatiana Gorilovsky
Our author also took part in this Facebook project, and reveals the challenges that went into making art of this kind.

Russia’s got talent. No, really! That much was made clear after the country went on lockdown and got in touch with its creative side. Art lovers across the nation set up a Facebook challenge that’s getting more viral by the day: people are uploading homemade replicas of world-famous paintings, made from whatever happens to be lying around the house: vinyl, dyes, toilet paper, lingerie, pets and so on.

Turning a Russian woman into a Mexican

Replicating the work at home proved to be really difficult. When I was searching for a face that would fit, I eventually stopped on a self-portrait of Russian artist Zinaida Serebryakova. 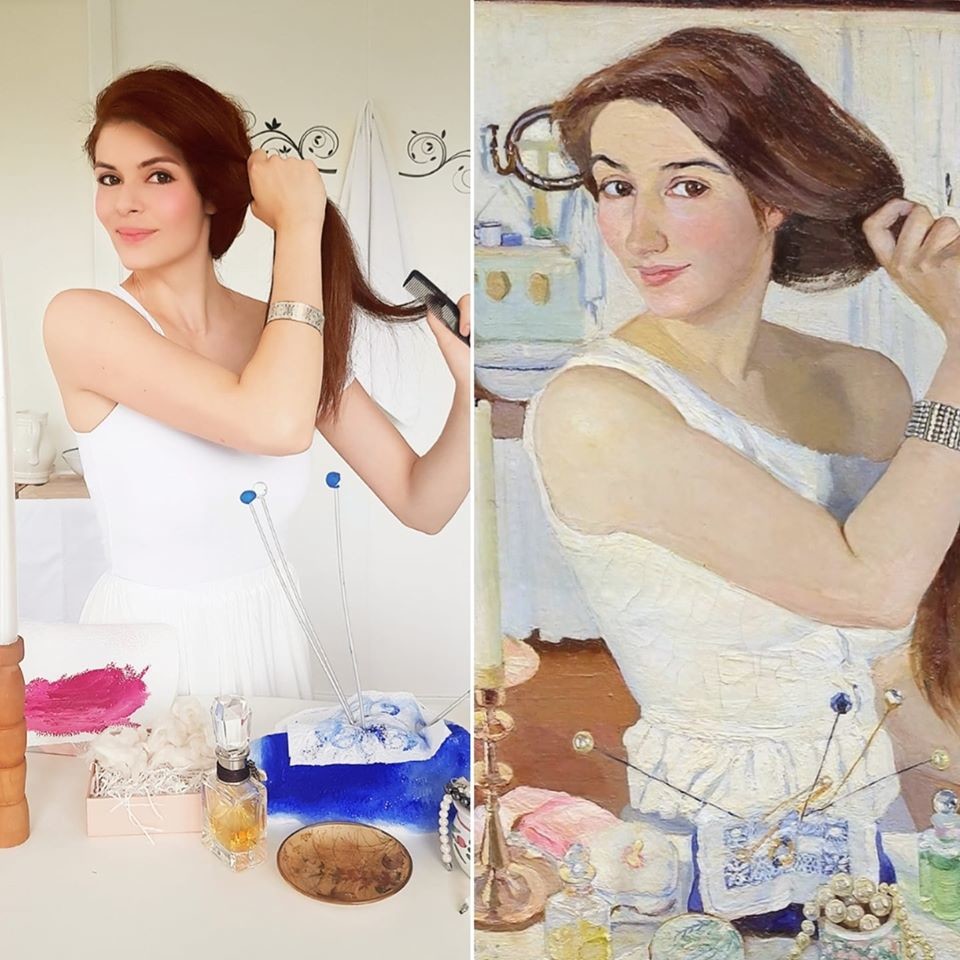 To recreate the painting, I had to dye napkins blue and insert knitting needles with balls made of modeling clay. The needles kept falling out, so I put fresh lemon pie underneath the cloth.

My husband and I took photos several times a day to get the correct lighting. The most difficult part was repeating the subject’s gaze, but I was successful in the end, and our replica earned us 10,000 likes on the ‘Izoizolyacia’ (A mashup of “isolation” and “art”) group page.

I was really inspired by the outcome, and the following day, I chose Mexican artist Jesus Helguera’s ‘Senorita’ for my next painting. I had to paint my mother’s pearl necklace red for that (and it still hasn’t worn off). Then I had to make another one from orange modeling clay and paint it over in gold, using acrylic paint. I had to climb a tree in the garden to get wisteria. 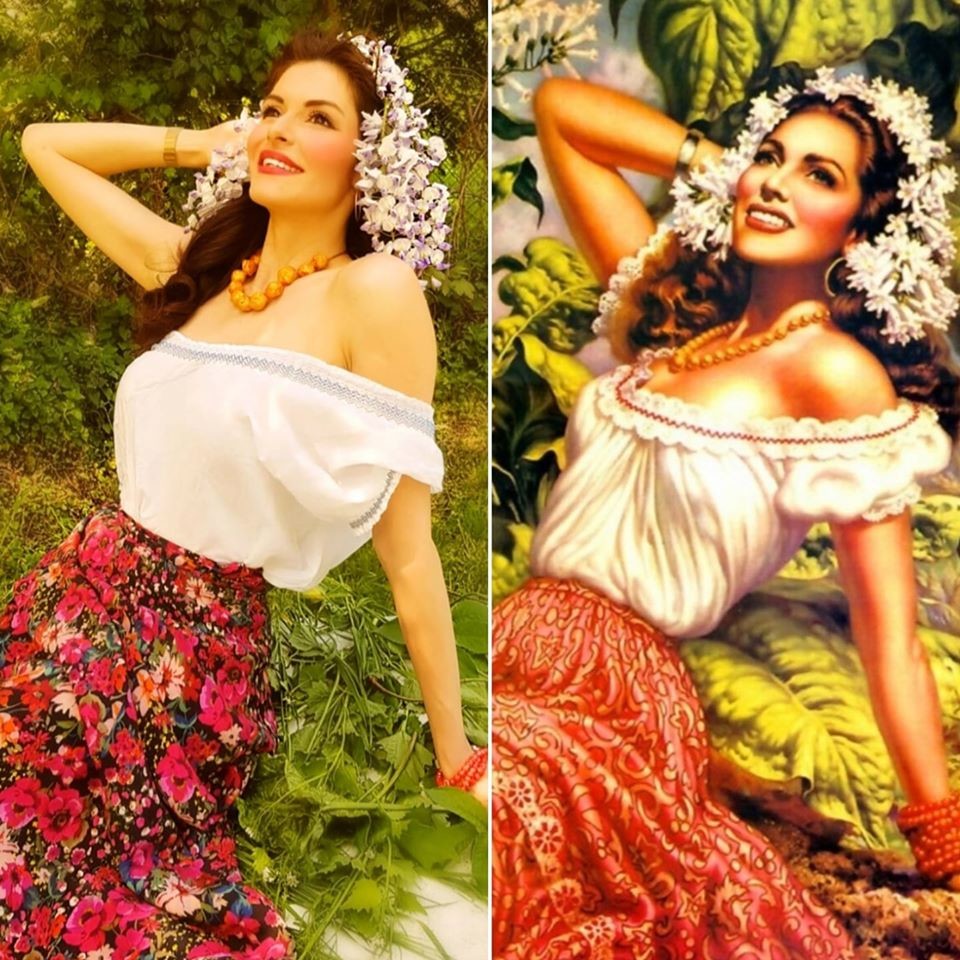 This replica turned out to be even more popular than the first, with 36,000 likes.

We chatted to others on the project, and found out what they got up to for their replicas.

Every member of the Okhotnikov family we spoke to collapses in laughter each time they take on the Izoizolyacia challenge. “We couldn’t stop laughing while doing Napoleon, when we couldn’t get my knee boots to sit properly on my husband,” Yuliya Okhotnikova says. 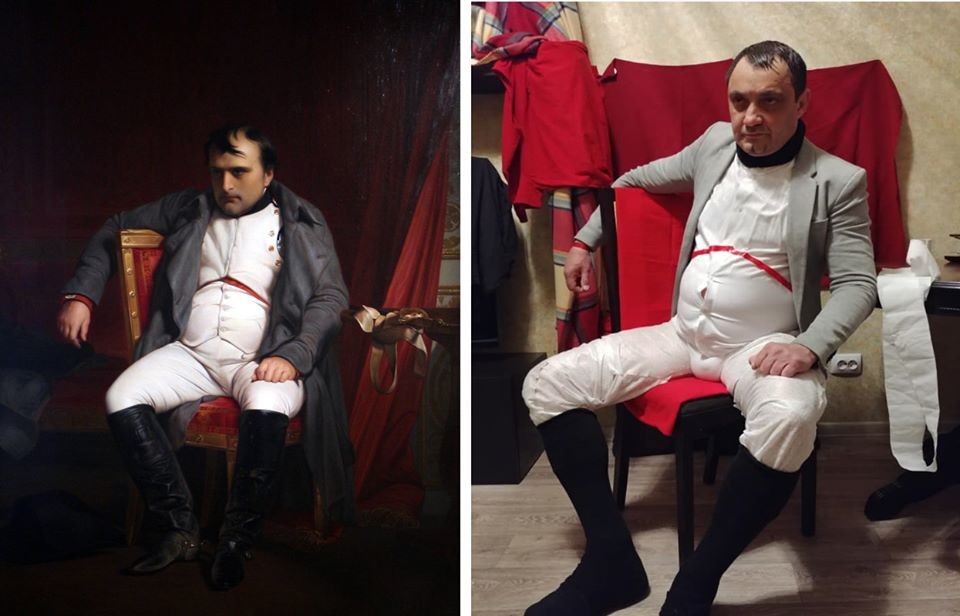 “We had to trim some stockings, then wrap his legs in white towels. Something fell off at every turn, and was very easily ruined. I also painted wallpaper to put over the windows and block out the light and snow outside - it’s meant to be a hot summer in the painting.”

Konstantin Korovin. At the Tea Table

One such photoshoot really left a mark on Yuliya’s husband: “When I was doing a bird for one of Pirosmani’s paintings, I was painting my face. It was 2 am, my husband had woken up and got terribly frightened by the sight.”

Sky made of sheets and an umbrella from grandma’s robe

Yuliya Nemchinova shot to online fame with a replica of Rafal Olbinski’s ‘Red Umbrella’. “Bringing the works of surrealists to life is the most fun,” she says. 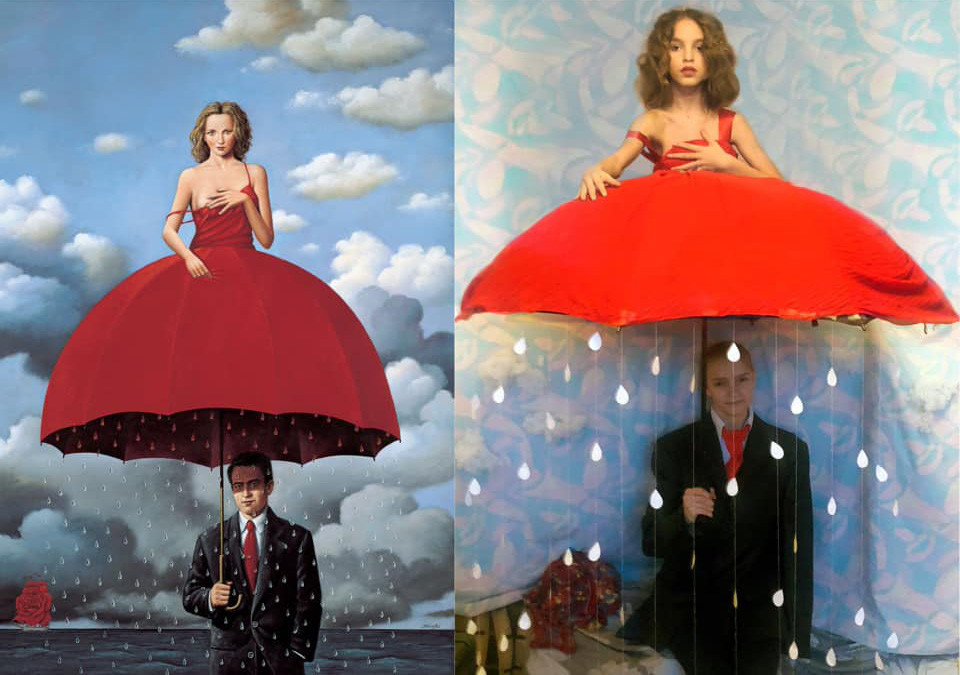 “We swapped the blue sky for a bed set of the same color, then simply taped some white sheets to the walls. Then we decorated a black umbrella with grandma’s red shawl, spending a long time cutting up paper water drops, getting the thread through the needle, making the rain, attaching it to the umbrella. This was, perhaps, the toughest part to get right.”

When Marat Kim saw Roy Lichtenstein’s painting, he knew he had to attempt it with vegetables. He just happened to have some eggplant and tomatoes in the fridge. 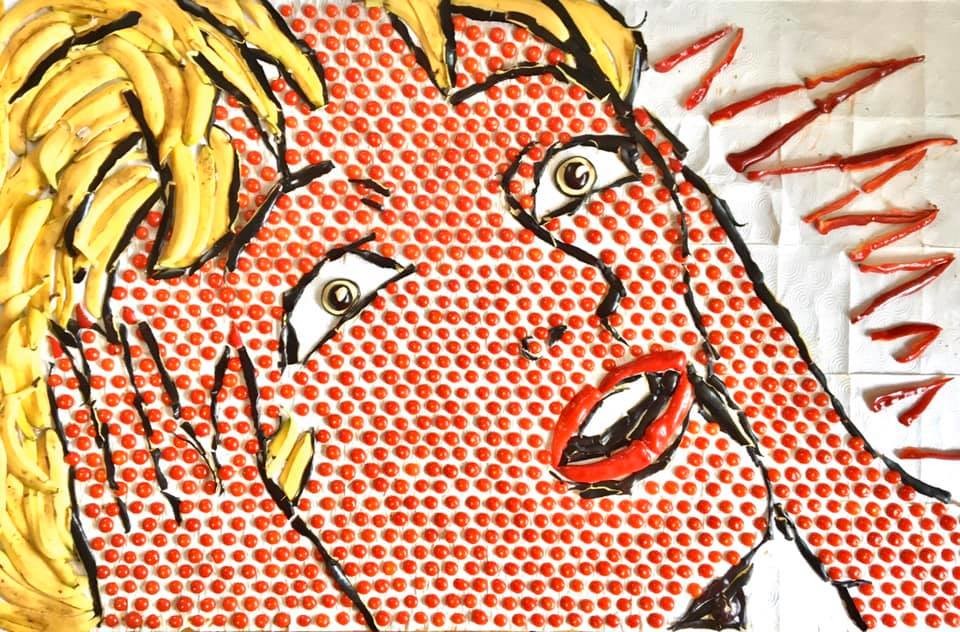 “I laid out some paper towels on the floor. First I laid the eggplant eyes, then proceeded to lay out the cherry tomatoes, but quickly discovered that I didn’t have enough,” Marat says.

This resulted in two trips to the store, amounting to 800 cherry tomatoes for the replica. However, two days later, the painting was denied by the group admins. “They thought there was no idiot in existence who’d spend time squatting down, laying out sliced cherry tomatoes. By hand. I had to explain to them that the work has not been ‘photoshopped’, and, as a result, it was published,” the author laughs.

After the shoot, Marat made his favorite dish of lamb and vegetables, using his picturesque ingredients.

The most difficult part of the work for Tatyana Gorilovski was getting the cat so sit still. The ornament was made with a set of magnets and small rubber bands. The mother and her daughter used scotch tape to attach the piece at the other side, using black pants under the hair to give it proper form and contour.

Gustav Klimt. Portrait of Adele Bloch-Bauer I a.k.a. The Lady in Gold

“It was hard to get it exactly right. It turned out that Klimt really stretched out his model’s neck and twisted her arms in an unnatural manner,” Tatyana says. “There are liberties artists can take, after all, making their subjects do whatever they wish. A photographer - particularly if you can’t use Photoshop - has considerably less elbow room.

Karina Melkumova’s grandmother became a huge hit with the group. “We didn’t have to try too hard to talk her into it,” Karina says. “The only part that was physically demanding was to change several times in a row, as we worked on the costume’s elements. We were having to give her some time to lie down and take a rest.” 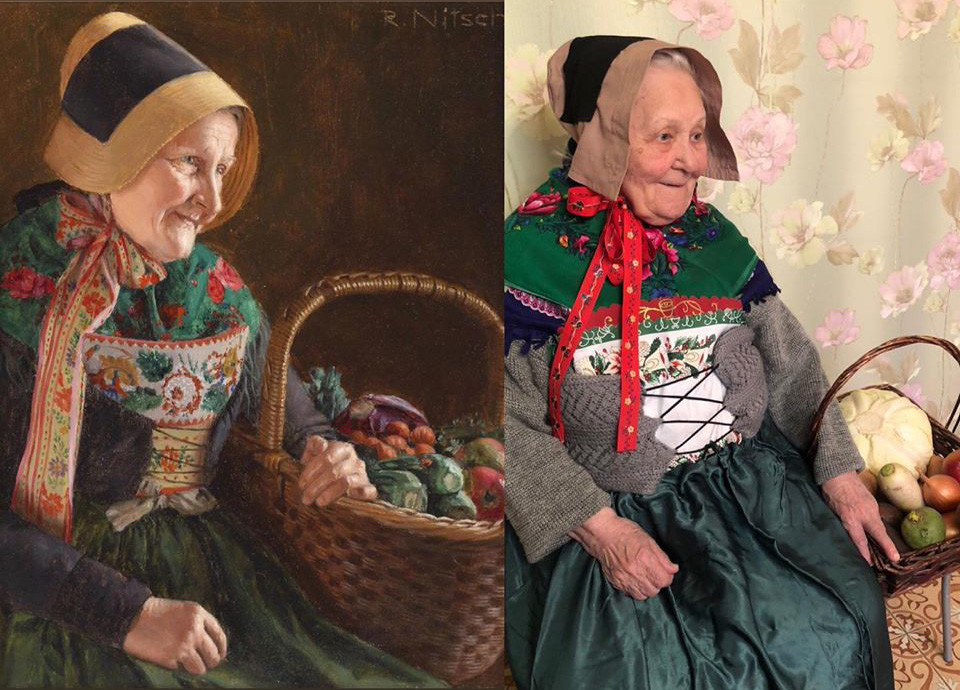 Thanks to the project, Karina’s whole family was included in the creative process, with the most difficult part being the headwear and the chef’s hat. 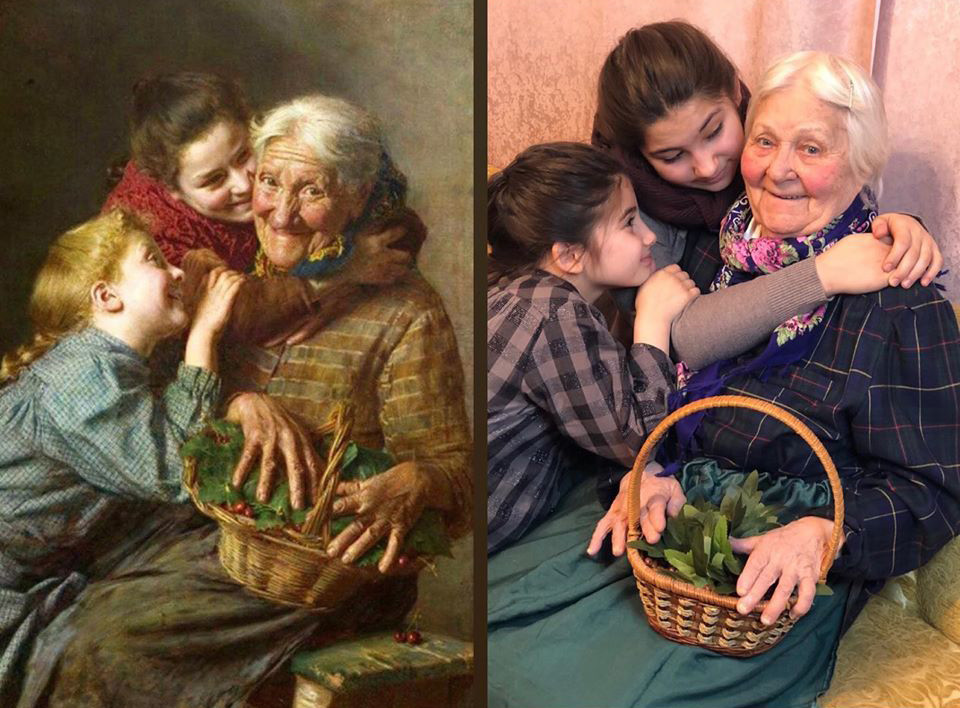 “When uploading my work to Izolyatsiya on Facebook, I couldn’t have imagined that the ones with my grandmother were going to smash records. The number of positive comments, thanks and praise that I got went through the roof! I try to read some of them to grandma, she really likes them!” Karina says.