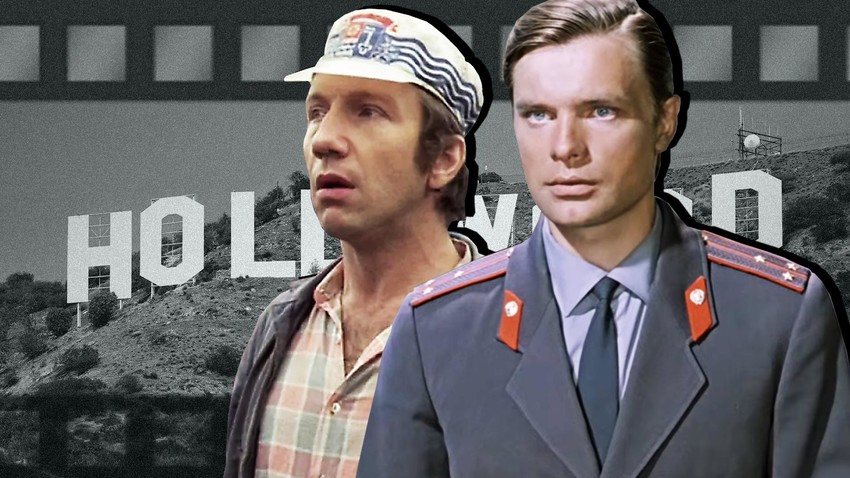 Aleksandr Sery/Mosfilm,1971; Georgy Danelia/Mosfilm,1975; Thomas Wolf (CC BY-SA 3.0); Russia beyond
“If you are looking for something, don’t go sit on the seashore and expect it to come and find you; you must search, search, search with all the stubbornness in you!” Konstantin Stanislavski, the founder of modern acting, once said. Several Soviet actors took his words at face value and moved to America in search of a new life and better acting career.

The so-called American dream means different things to different people. For movie actors, Hollywood has long been a dream factory, luring stars with fame and fortune. Naturally, getting what you wish for is not always what you expect it to be. 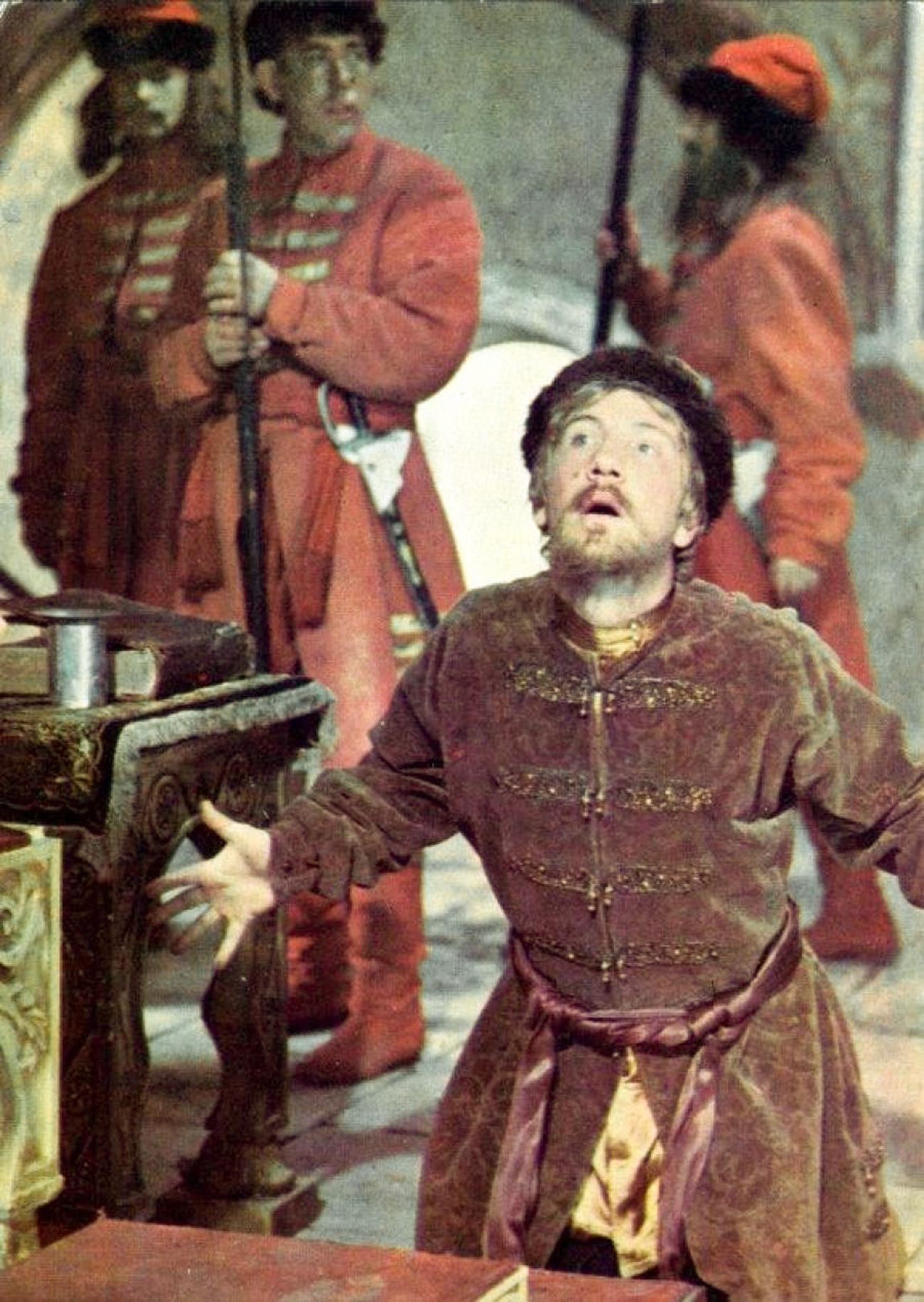 Kramarov in ‘Ivan Vasilievich: Back to the Future’.

Kramarov was the Charlie Chaplin of Soviet comedies. Throughout the 1960s-70s, the stunning artist was akin to a national treasure in the Soviet Union. As one of the greatest comedy actors, he starred in a slew of beloved movies, including ‘Afonya’, ‘Gentlemen of Fortune’, ‘Ivan Vasilievich: Back to the Future’ and ‘The Twelve Chairs’, just to name a few. Kramarov was cross-eyed, but it was also his more-than-ordinary appearance which brought him into the spotlight. Despite his looks, the actor became a flat-out star.

Kramarov was universally popular and warmly adored by audiences in the USSR. Paradoxically enough, his characters were far from perfect. “I mostly play crooks, drunks and idiots. This is probably why I always belong everywhere,” Kramarov once joked. His sense of humor never wavered. 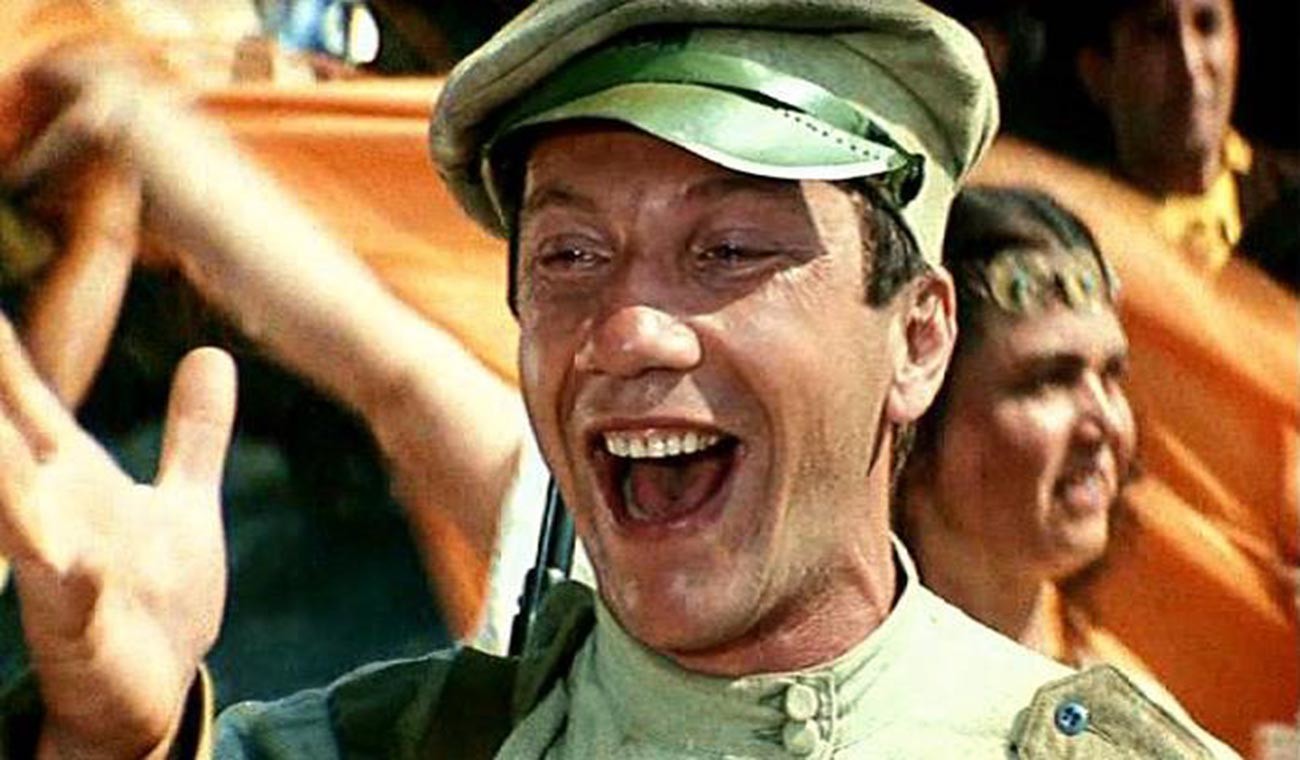 Savely Kramarov in 'The New Adventures of the Elusive Avengers'.

Savely was born in Moscow into a Jewish family. When he was three years old, his father, a prominent attorney, represented a bunch of defendants in a Soviet secret police case. Shortly after, Kramarov’s father fell victim to Stalinist purges himself. In 1938, he was arrested and sentenced to eight years in a Siberian gulag. Following his release, he briefly worked as a lawyer, but was arrested again and sent into exile for another five years. He was forced to work as a street cleaner, which was the final nail in his coffin that pushed Savely’s father to commit suicide. His mother, meanwhile, died of cancer when her son was 15. So, Savely was adopted by his uncle.

Despite his family’s tragic history, Kramarov always had a smile from ear to ear on his face and was an impeccable character actor. And yet, it must have been a tiresome burden for a versatile artist to be always typecast as a roughneck. The search for more freedom and versatility encouraged the actor to try his luck in America. 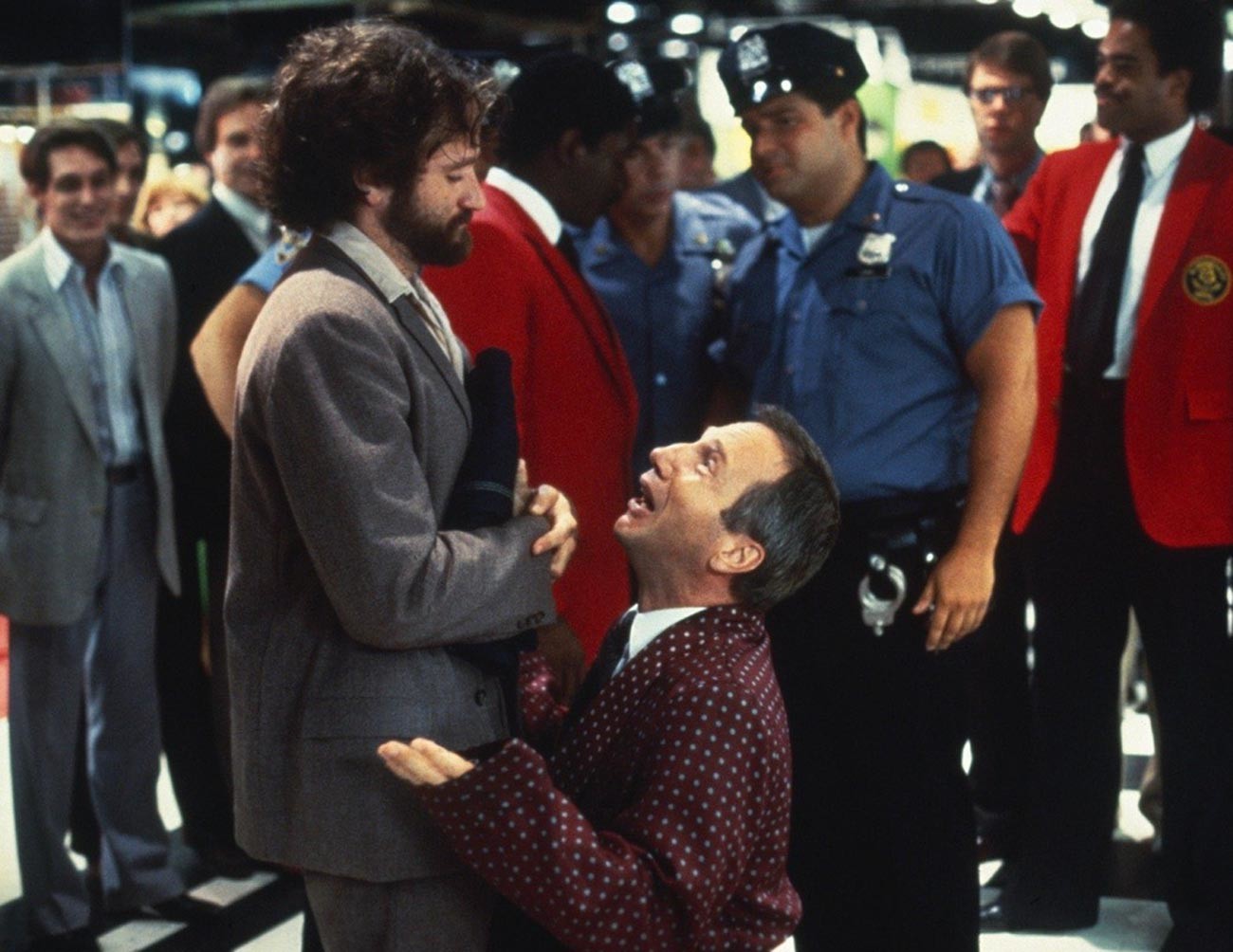 Part of the problem was that right after Kramarov’s uncle had emigrated to Israel, Soviet film studios immediately stopped working with Savely. Back then, not only those who emigrated became pariahs, but their family members just as well. To make things worse, Soviet authorities wouldn’t allow the actor to leave the country. To break through, in 1981, Kramarov wrote a letter to the then U.S. President Ronald Reagan, entitled ‘One actor to another’. His appeal went public, made a lot of waves and Kramarov was finally allowed to leave.

In the United States, the actor, who was obsessed with his health, did yoga and was on a raw-food diet, had strabismus surgery. Some critics said he actually lost his charm as a result. And yet, in Hollywood, Savely had a chance to show off his comedic side. He played a Soviet KGB apparatchik in the 1984 comedy drama ‘Moscow on the Hudson’, starring Robin Williams.

READ MORE: 7 Hollywood celebs who are in fact RUSSIANS!

In the late 1980s, Kramarov had cameo roles in such comedies as ‘Armed and Dangerous’, ‘Morgan Stewart’s’, ‘Coming Home’, ‘Red Heat’ and ‘Tango and Cash’. These movies cemented his status as a comic actor with a phenomenal gift. Kramarov was always true and alive, great to watch on screen. He would have had a long, successful career had it not been for a fatal disease. Kramarov sadly died in San Francisco in 1995, after a long battle with cancer.

Incredibly handsome, disarmingly sexy and plain lovable. The blue-eyed womanizer with the lady-killer smile played in around fifty movies, first showing off his artistic talent in the early 1960s in ‘The Blizzard’ and ‘An Ordinary Miracle’. 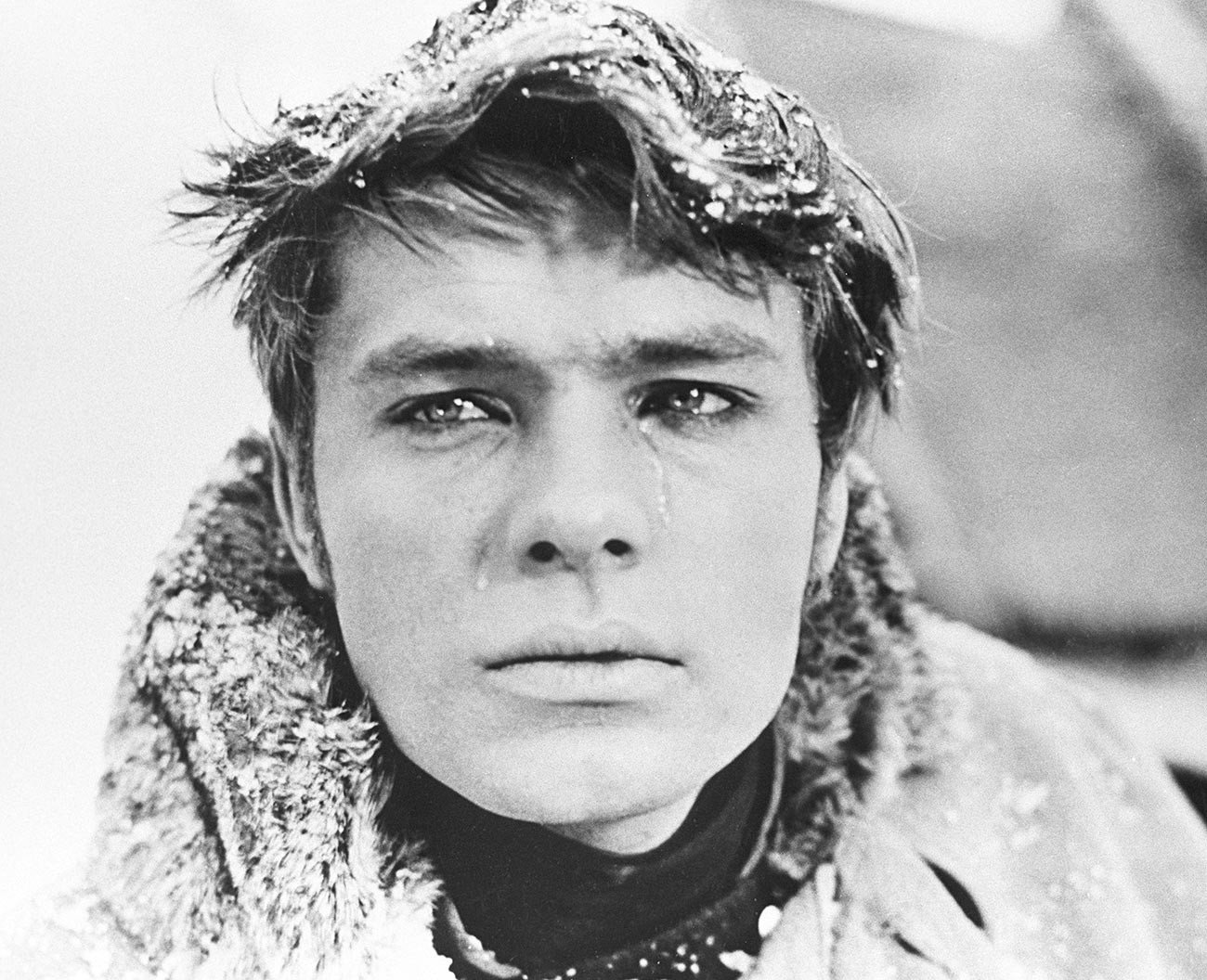 Oleg Vidov in The Blizzard.

When he was a little boy, his father left the family for another woman. Oleg was brought up by his mother and her sister, who ran an amateur theater and instilled the love of art in her nephew. In the late 1940s, they moved to Mongolia, where his mother worked as a school teacher and, later, to East Germany, where she was a proofreader at a publishing house. Oleg started working as a teen. He picked up odd jobs, trying his hand at being an assistant chef, a loader, a storekeeper, an electrician and even a male nurse. At some point, he even toyed with the idea of becoming a doctor. In 1960, Vidov had a cameo in the school drama ‘My friend, Kolka’, directed by Aleksandr Mitta. Soon after, Vidov enrolled in the famous VGIK film school. 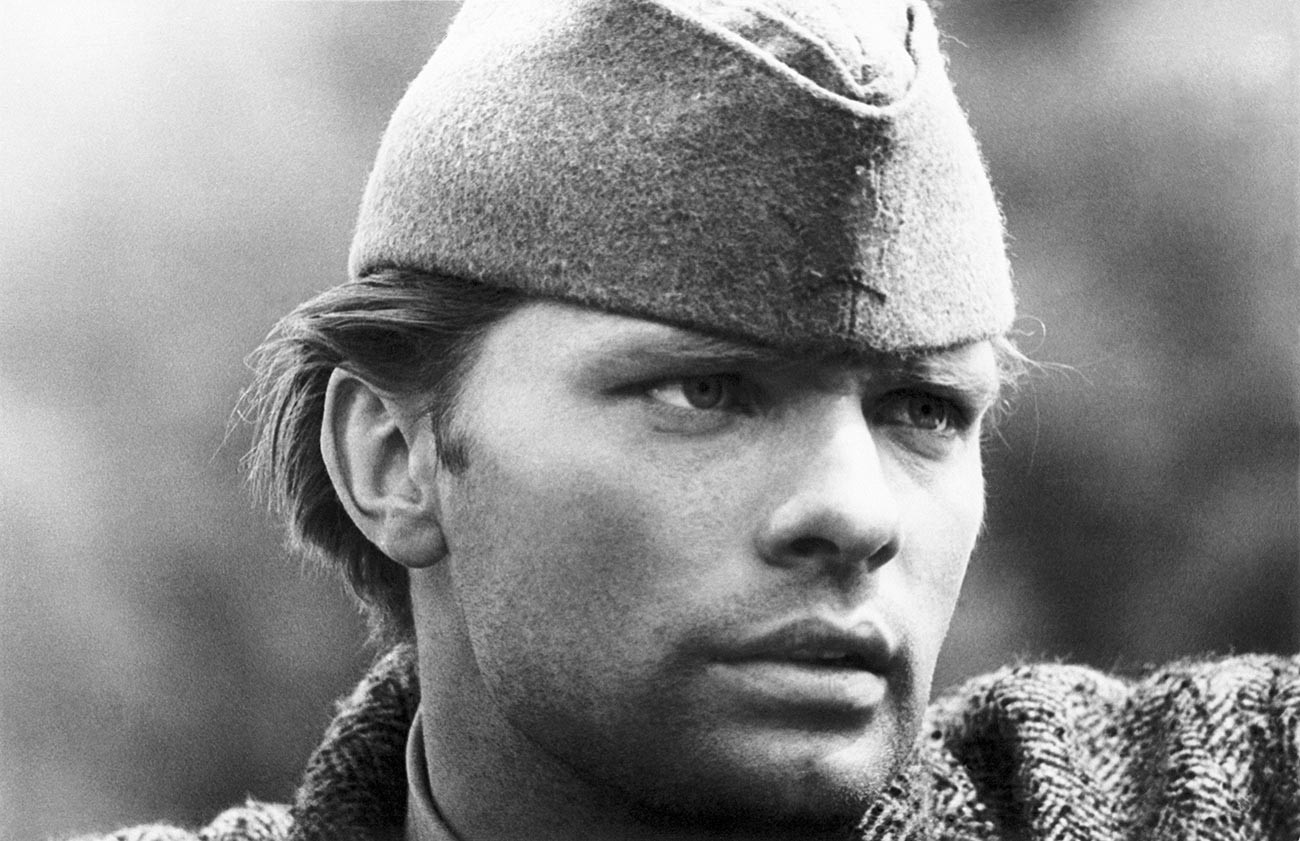 The star of ‘Battle of Neretva’ Oleg Vidov.

Vidov, who was fluent in German, starred in several co-productions, such as the Scandinavian hit drama ‘Hagbard and Signe’ (1967), Yugoslavia’s ‘Battle of Neretva’ (1969) and the Russo-Italian production ‘Waterloo’ (1970), directed by Sergei Bondarchuk.

Vidov oozed charisma and charm on screen. In 1971 he starred in iconic Soviet comedy ‘Gentlemen of Fortune’ and period drama ‘The Lion's Grave’. In 1973, the actor became a national sex symbol after he portrayed Maurice Jerald in ‘The Headless Horseman’, based on Mine Reed’s famous novel. 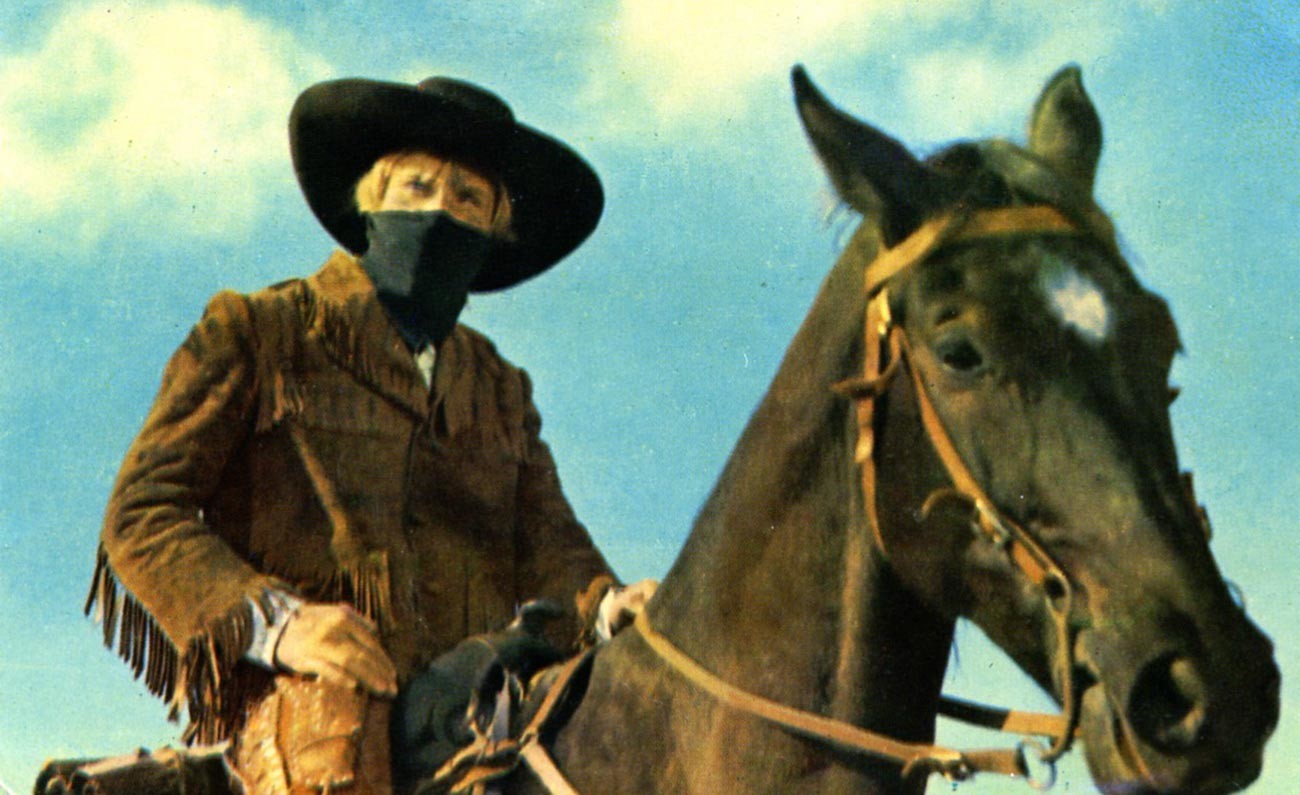 Vidov portrayed Maurice Jerald in ‘The Headless Horseman’, based on Mine Reed’s famous novel.

His reputation preceded him. Oleg was irresistible to women of every stripe, age and race. He was married several times. One of his wives was his ticket to freedom. In 1983, the lovable lady’s man was allowed to live and work in Yugoslavia with his third spouse, a Yugoslav actress. Two years later, in Italy, the actor met the love of his life, American journalist Joan Borsten. They ended up being married for 27 years.

Vidov was then granted political asylum in America, where he was often referred to as the Soviet Robert Redford.

Vidov’s prolific life and career came to an end in 2017. The actor succumbed to cancer. He left an indelible legacy and was buried at Hollywood Forever Cemetery.

No other Soviet actress so cunningly combined Stanislavski’s signature art of experiencing with the ingenuity of a woman capable of conveying emotion economically. In her signature roles, Solovey was like a Matryoshka doll of sentiment, with more and more revealed as she peeled away layer after layer. 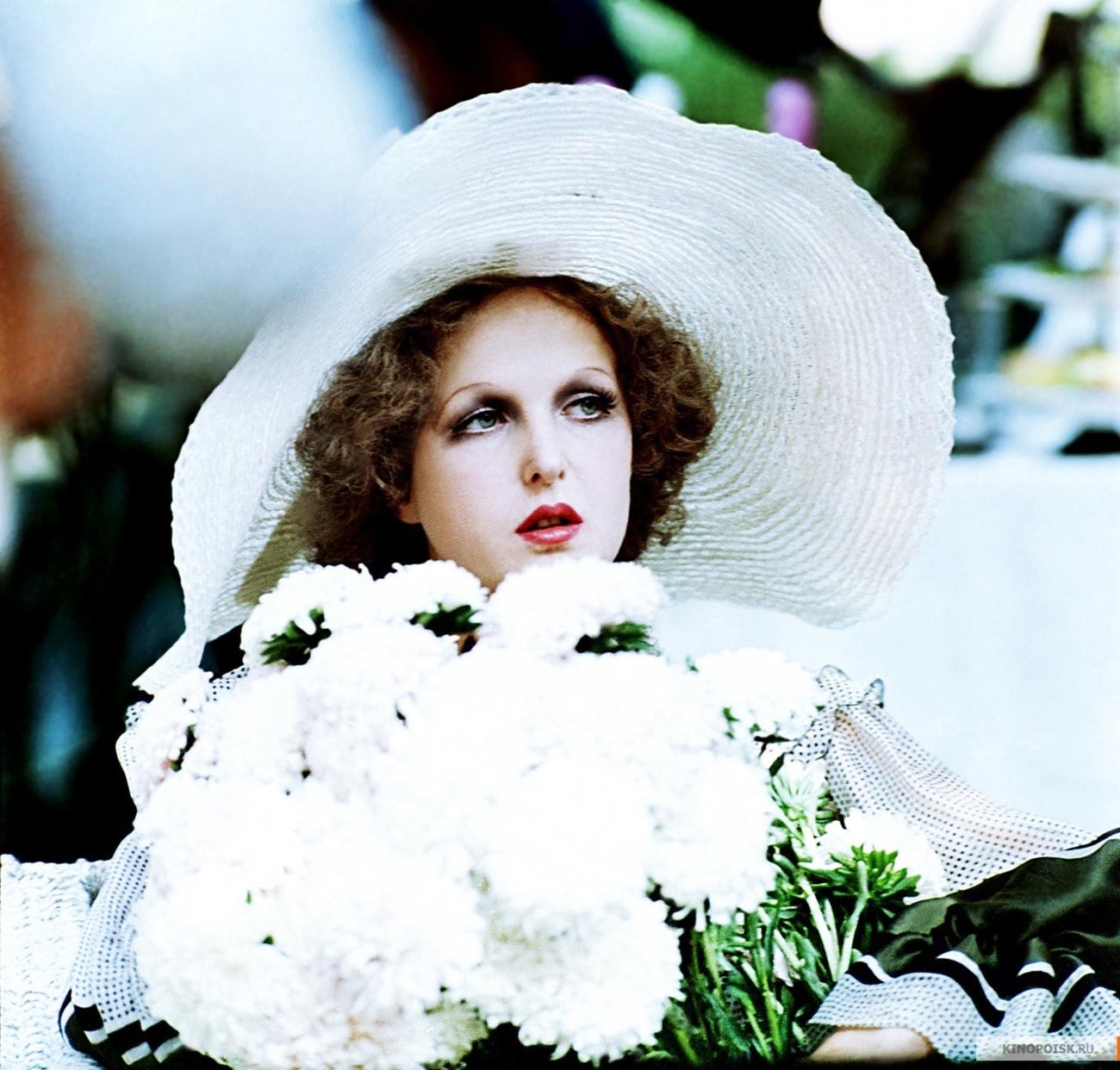 Her breakthrough role came in Nikita Mikhalkov’s masterpiece, ‘A Slave of Love’.

Solovey was born into a Russian-Jewish family in the Soviet military garrison in Neustrelitz, East Germany. Her parents met at the very end of World War II. Her father was an artillery officer in the army, her mother was a nurse. When Elena turned three, her family moved back to the USSR.

Elena dreamed of becoming an actress ever since she was a little girl. Her dream came true in the 1970s, when she got the chance to appear in such movies as ‘The Deer King’, ‘About Love’ and ‘Drama from Ancient Life’. Her breakthrough role came in Nikita Mikhalkov’s masterpiece, ‘A Slave of Love’ (1975). The drama, set during the Russian Civil War, focused on a silent film star, whose character was inspired by the ultimate diva of Russian cinema, Vera Kholodnaya. 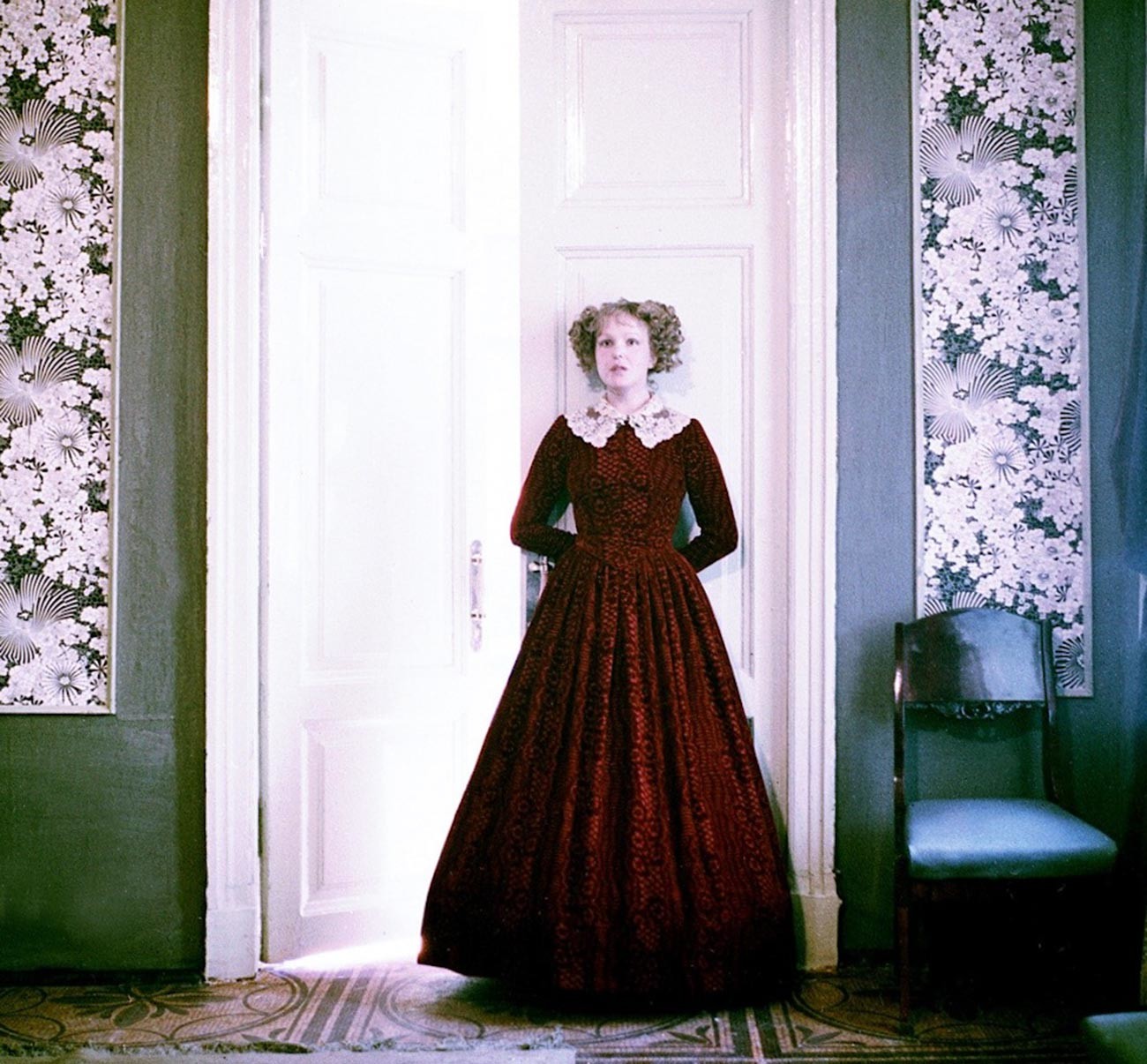 ‘A Few Days from the Life of I.I. Oblomov’ shaped Solovey’s career.

Mikhalkov’s early movies, including ‘An Unfinished Piece for Mechanical Piano’ and ‘A Few Days from the Life of I.I. Oblomov’ shaped Solovey’s career. An award-winning actress of disarming talent and range, Elena starred in more than fifty Soviet movies. In 1991, the turbulent year the USSR collapsed, the actress emigrated to the United States. She was forced to put her artistic career on the back burner after her husband was diagnosed with a serious disease. Solovey never actually dreamed of Hollywood, letting her private life dominate the agenda. Her family always came first for her.

Solovey taught acting at a private school and worked in Russian-speaking radio in New Jersey. She made her return to cinema in 2002, with a cameo appearance in ‘The Sopranos’ TV series. Her portrayal of Branca Labinski, Corrado Soprano’s nurse, created a buzz.

Solovey is that rare actress who never grabs the biggest piece of the pie on the big screen, as if her mission is to help her co-stars shine instead. Retaining her charm, Solovey starred in three arthouse movies by award-winning U.S. director James Gray. The Russian actress played in ‘We Own the Night’ (2007), starring Joaquin Phoenix, Eva Mendes and Robert Duvall; ‘The Immigrant’ (2013) with Marion Cotillard and Joaquin Phoenix, and ‘The Lost City of Z’ (2016) with Robert Pattinson. Luminous actors deserve oxygen-rich material to be able to shine.

Born into a Jewish family in Riga (then part of the SSR), Baskin emigrated to the U.S. in 1976. He said he left for fear of “missing the moment”. In the Soviet Union, Ilya, who graduated from Moscow’s Circus School, had cameos in several feature movies, such as ‘Big Break’, ‘The Telegram’ and ‘Three Days in Moscow’. 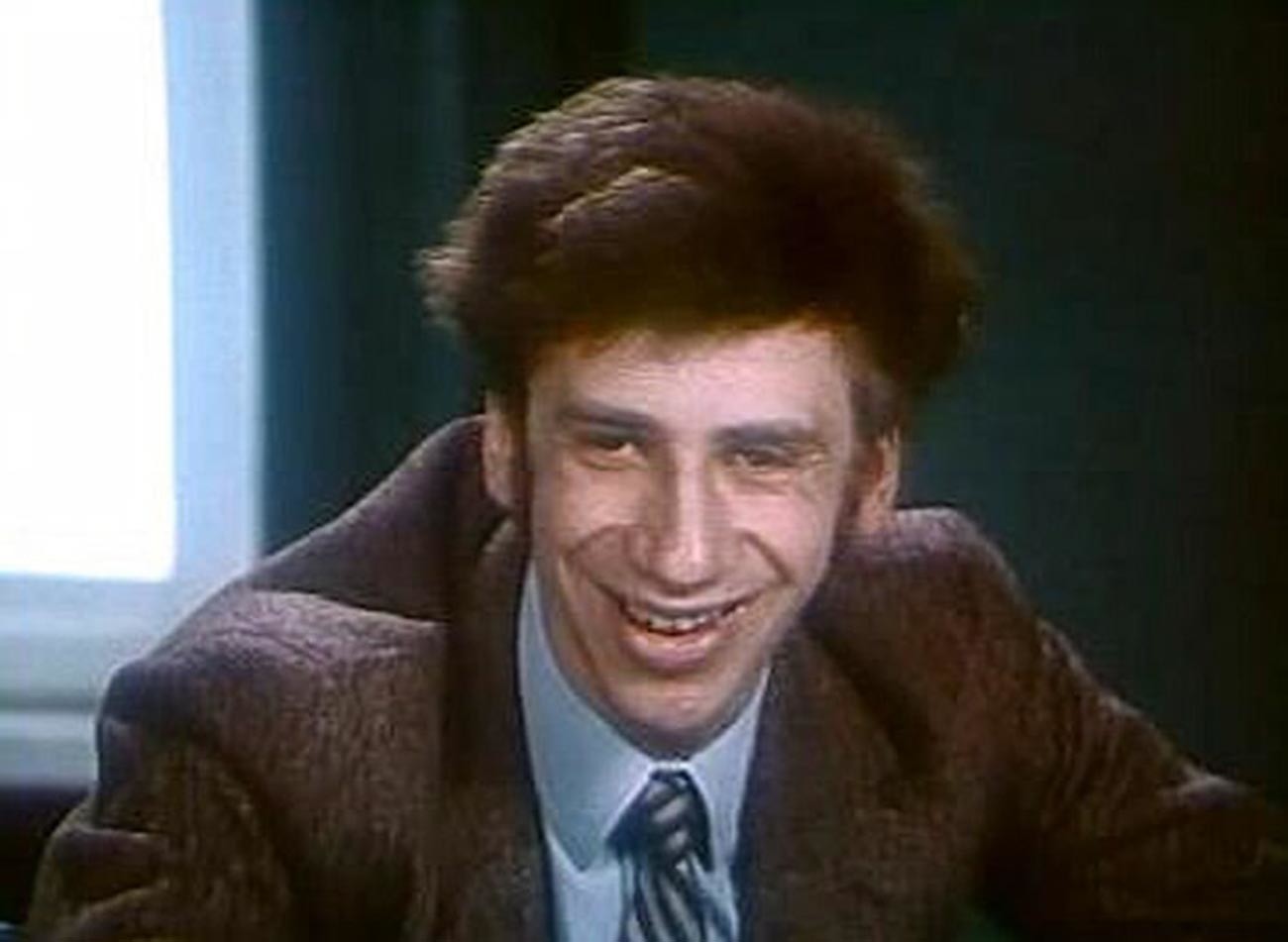 Baskin landed in California at the age of 26, with no command of the English language whatsoever. He got a job at a restaurant. A sixth sense told him that he wouldn’t be doing it for the rest of his days.

And sure enough, Baskin hit the jackpot soon after, in 1977. He was offered his first role in Hollywood just six months after arriving in Los Angeles. His first role was a small cameo in ‘The World's Greatest Lover’, directed by Gene Wilder. 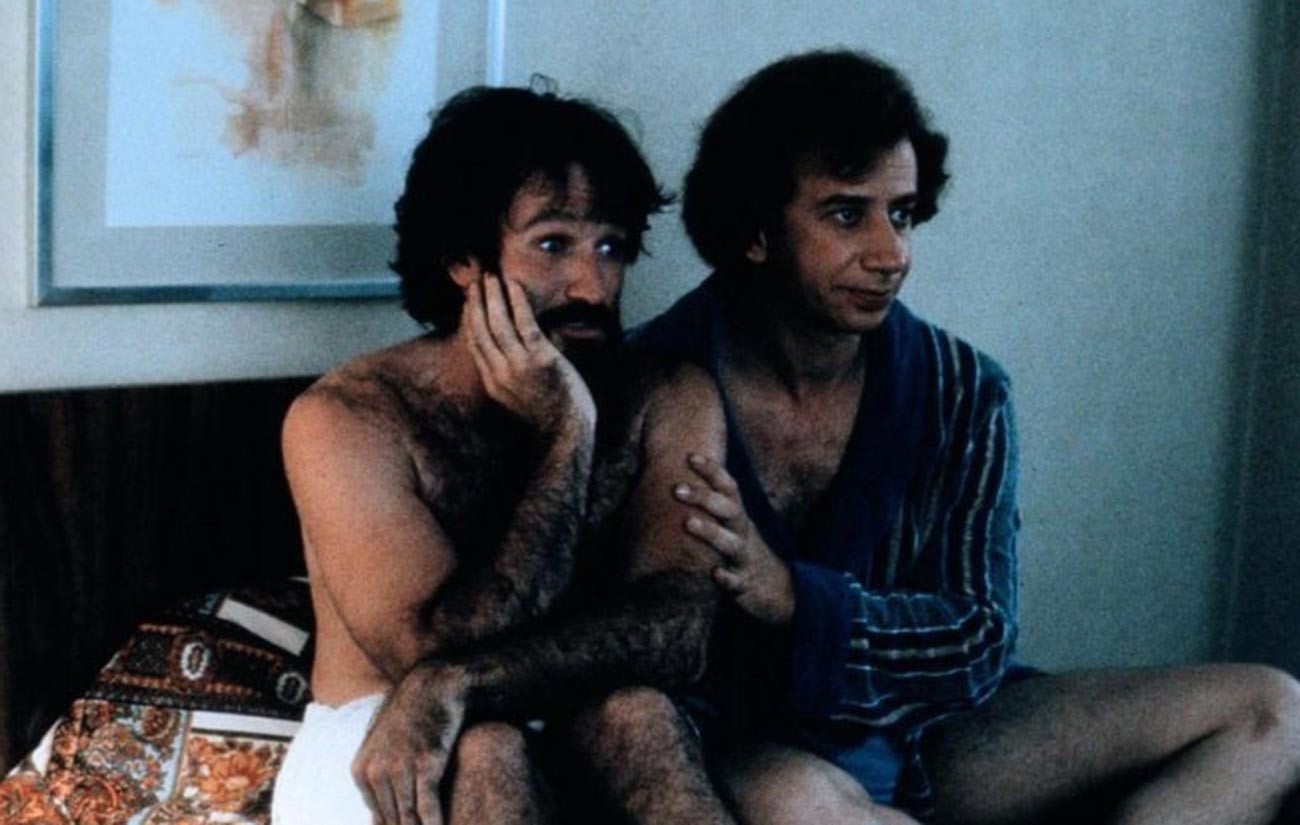 Ilya was never nostalgic for the Soviet Union. He created the first Russian-language weekly newspaper in LA, called ‘Panorama”.

Baskin also worked for an insurance company to make ends meet. In the long run, however, the ambitious young man with signature East European accent proved his acting worth. 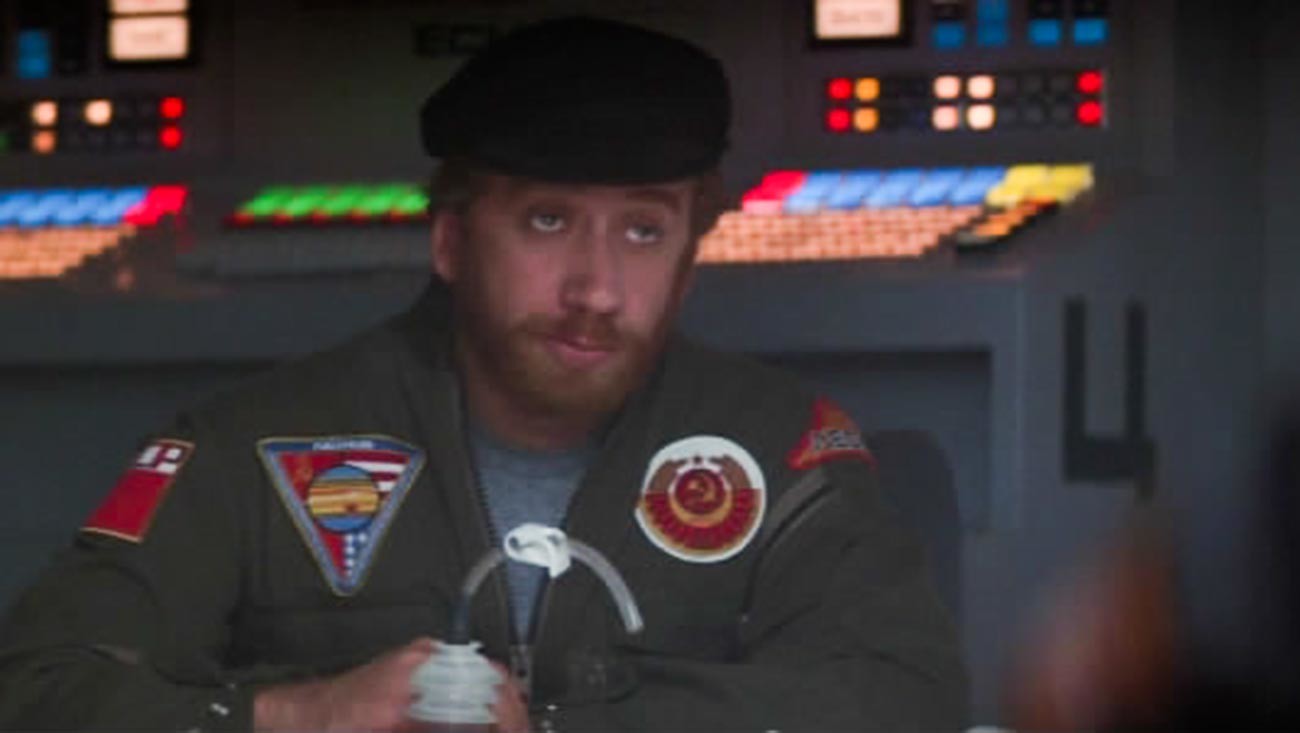 In Hollywood, Baskin made a name for himself starring in larger-than-life comedies and action-packed flicks. He played a bookkeeper in ‘Butch and Sundance: The Early Years’ (1979) and a Russian aide in ‘Being There’. His breakthrough came when Ilya played opposite Robin Williams in Paul Mazursky’s 1984 comedy drama ‘Moscow on the Hudson’. He displayed his acting skills in ‘Deepstar Six’ (1989) and ‘Love Affair’ (1994). Baskin also played a terrorist pilot in ‘Air Force One’ (1997).

For a change, the political thriller starring Harrison Ford and Gary Oldman gave the actor a rare chance to play a bad guy. Baskin also has plenty of TV credits, ranging from ‘My Town’ (1986) and ‘Mad About You’ (1997) to ‘Cold Case’ (2010) and ‘Homeland’ (2018), where he played Russia’s Ambassador to the United States. Quite symbolic, apropos.