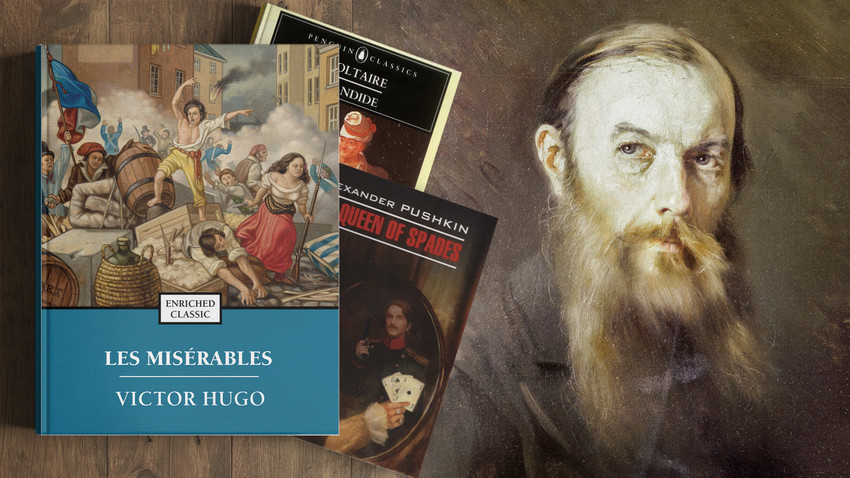 Yarin/Sputnik; Каro, 2017; Simon & Schuster, 2005; Penguin Classics, 1950
Fyodor Dostoevsky doesn’t really need much of an introduction. He wrote his masterpieces from the character’s point of view to investigate the metaphysical aspects of misery, heartbreak and injustice. The author of ‘Crime and Punishment’ foresaw an era of global violence and became one of the most important voices of Russian culture.

Dostoevsky’s novels, including ‘The Idiot’, ‘Demons’ and ‘The Brothers Karamazov’, cemented his status as a giant of 19th Century Russian literature. His timeless works influenced the writings of prominent novelists and intellectuals, from Virginia Woolf to Orhan Pamuk. 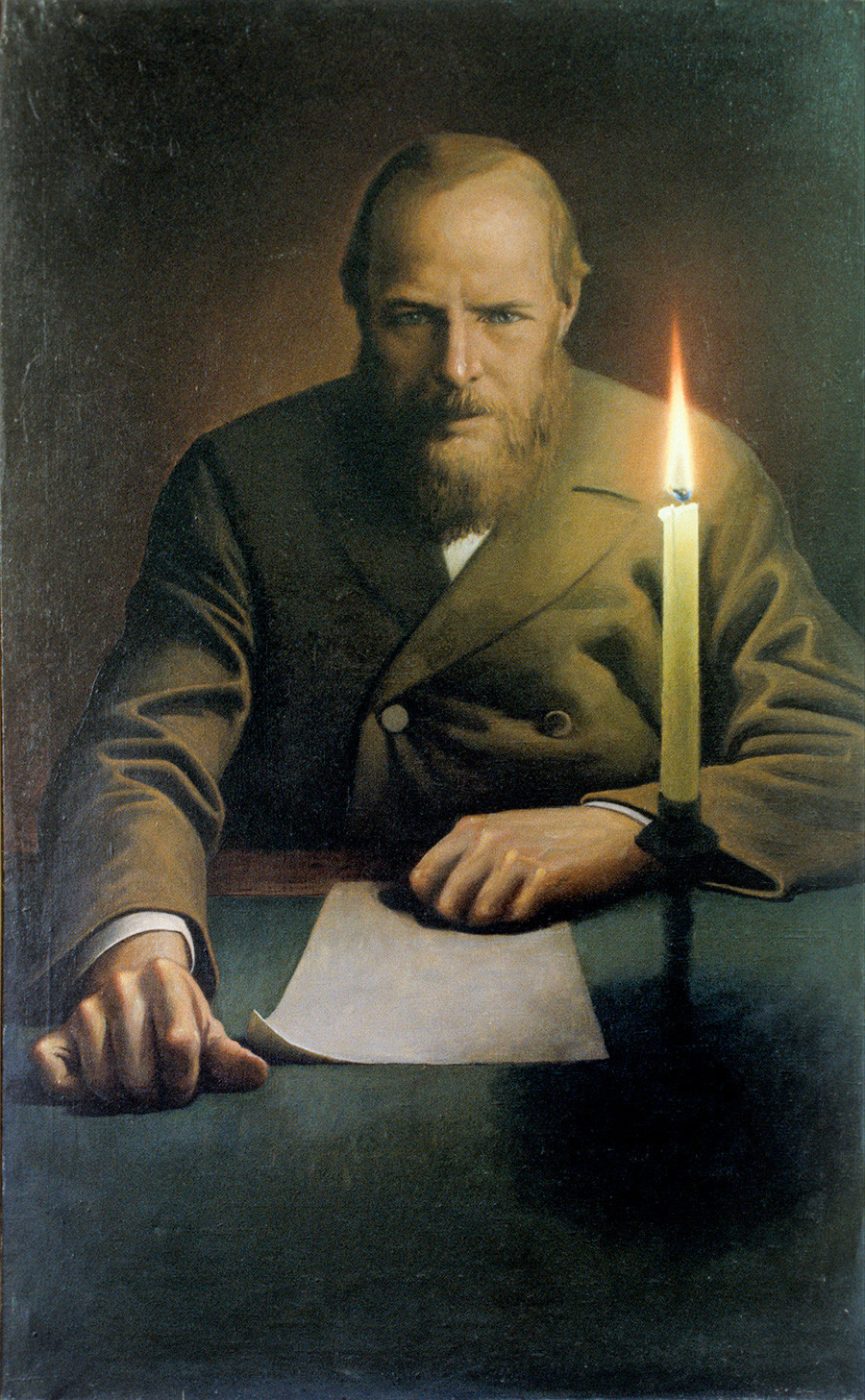 It’s a two-way street, and Dostoevsky had his own literary preferences as a writer just as well. What books did he value, and why?

There was a tradition of public book readings in Dostoevsky’s family. Just like his father, Fyodor Dostoevsky read the Russian and European classics aloud to his children. The man behind ‘The Idiot’ introduced them to the Bible through a book that he himself first read as a boy – ‘One hundred and twenty-four stories from the Old and New Testaments.’

Dostoevsky often mentioned his favorite authors in his letters and notes. He said he admired the novel ‘Oblomov’ by Ivan Goncharov, and would strongly recommend reading Leo Tolstoy's ‘War and Peace’. Dostoevsky was a devoted reader who spoke highly of Alexander Pushkin, Nikolai Gogol, and Leo Tolstoy. The Russian novelist was also fascinated by the writings of Charles Dickens, Victor Hugo, Honoré de Balzac, Walter Scott, William Shakespeare, Lord Byron, and Diderot.

The following five books, however, were among Dostoevsky’s all-time favorites.

1. ‘The Queen of Spades’ by Alexander Pushkin

Dostoevsky's favorite poet since childhood was the leading light of Russian verse, Alexander Pushkin (1799-1837), unmatched for his stylistic versatility and depth of human feeling. Dostoevsky knew many of his poems by heart. The author of ‘The Gambler’ (who had been a compulsive gambler for 10 years) especially cherished Pushkin’s mystical short story, ‘The Queen of Spades’. Published in 1834, it’s a parable about greed and its fatal consequences. 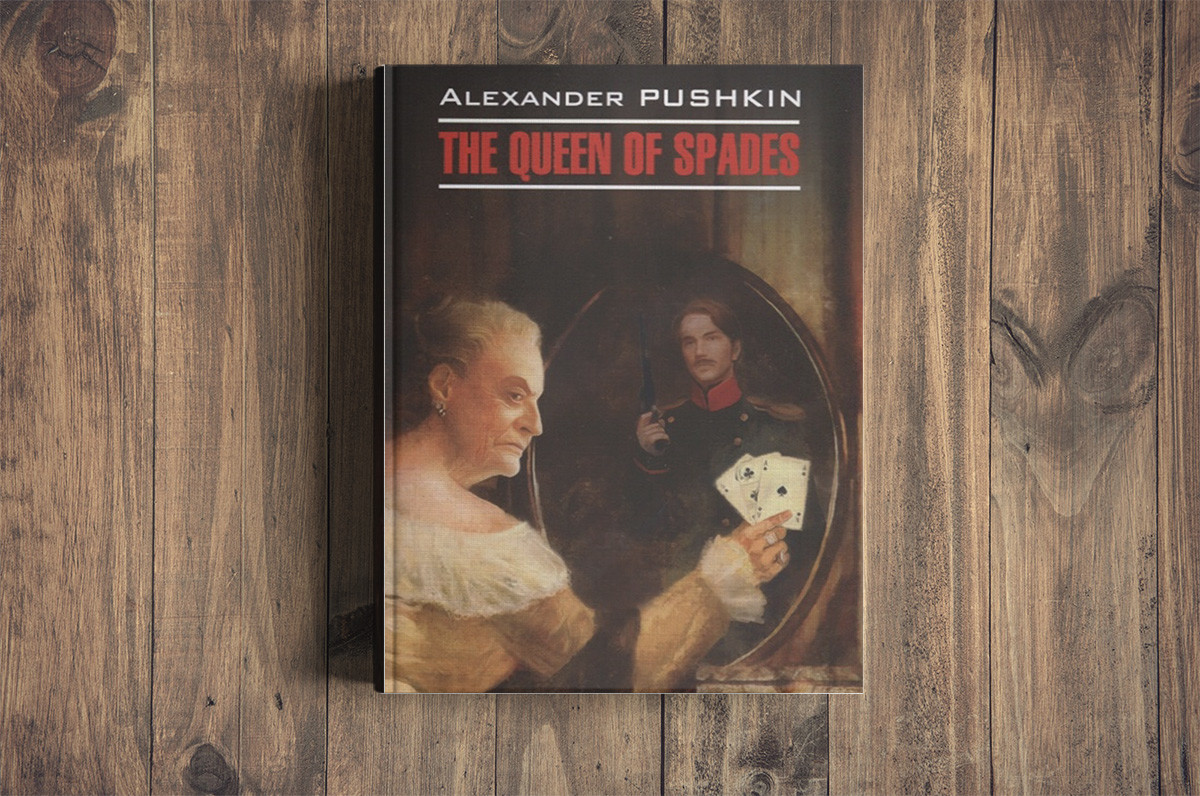 Pushkin’s tour de force revolves around Hermann, a young Russian military engineer of German descent, who learns that his fellow officer’s grandmother (elderly countess Anna Fedotovna Tomskaya) holds the secret to winning a card game. Carried by an almost maniacal desire to worm out of her the secret, Hermann starts an affair with the countess’ young ward, Lizaveta. But things go off the rails when Anna Fedotovna refuses to share her deeply held secret with Hermann.

Dostoevsky often went back to ‘Don Quixote’, regarded as the first modern novel. He loved the epic two-part book and reread it many times. It served as a constant source of inspiration. 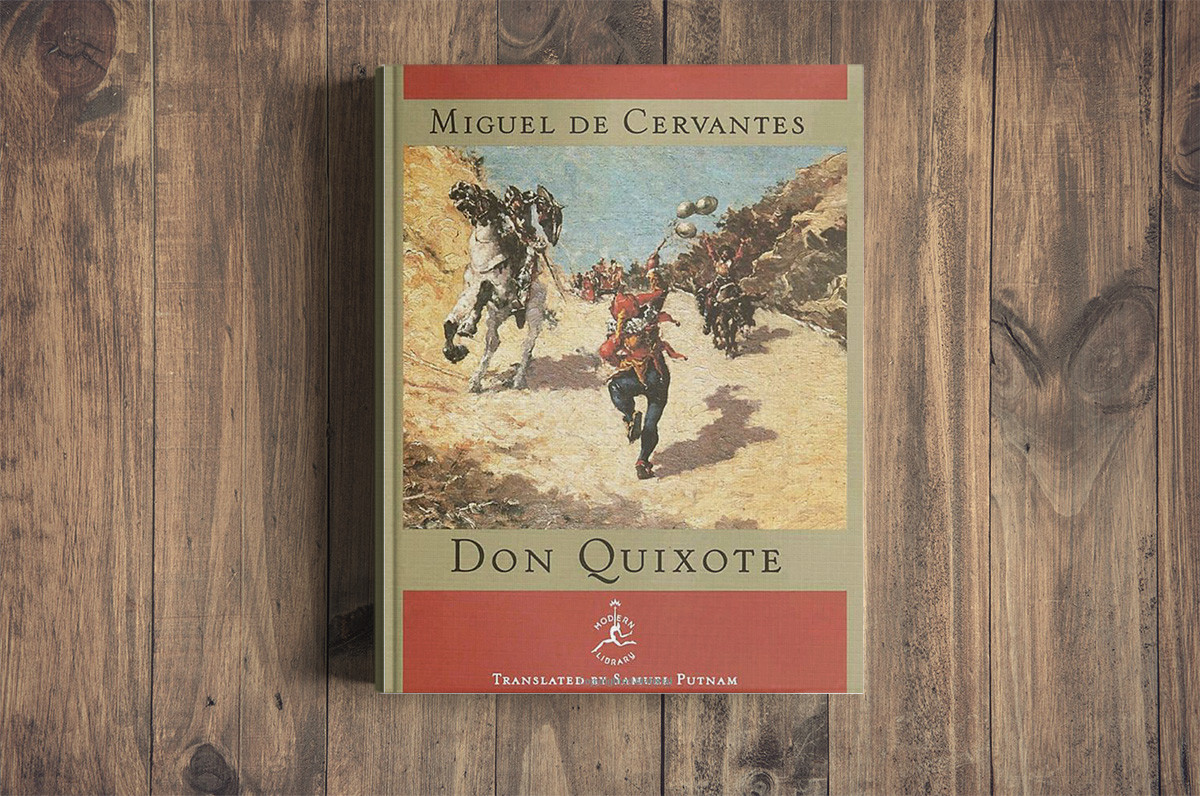 First published in the early 17th Century, the Spanish magnum opus depicts the knightly adventures of the two larger-than-life partners, Don Quixote de la Mancha and his faithful squire Sancho Panza. A timeless meditation on the essence of life, ‘Don Quixote’ is one of the greatest works ever written.

“For neither good nor evil can last forever; and so it follows that as evil has lasted a long time, good must now be close at hand,” Miguel de Cervantes (1547-1616) believed. Unlike Dostoevsky, he was a perennial optimist.

Dostoevsky preferred stories with ingenious plot twists and outlandish characters. In the case of George Sand (1804-1876), Dostoevsky was "struck by the chaste, highest purity of types and ideals, and the modest charm of the strict and restrained tone of the story." 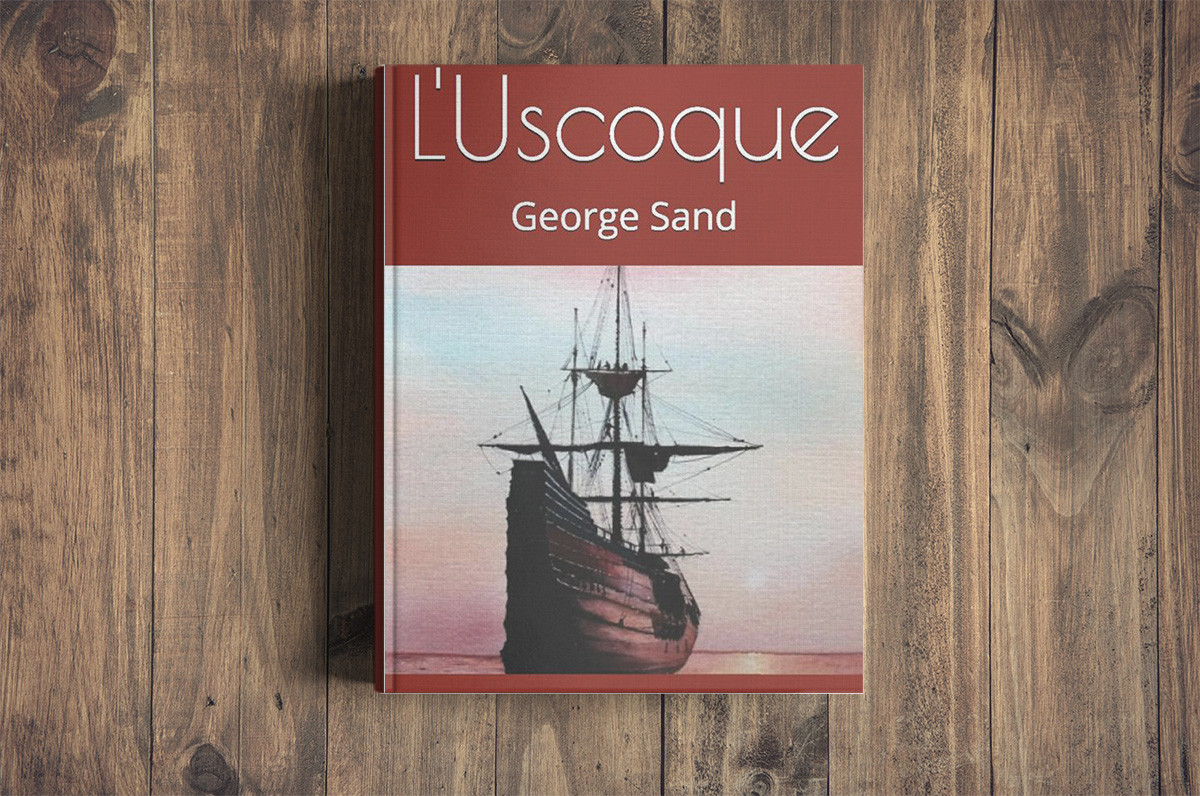 George Sand (whose real name was Amantine Lucile Aurore Dupin, and who adopted a male pseudonym simply because in the 19th century male novelists were in higher demand than their female counterparts) was a devotee of romanticism and realism, and admired the dramatic poems of George Gordon Byron. The main inspiration behind ‘L'Uscoque’ is Byron's tragic tales in verse, ‘The Corsair’ and ‘Lara.’

‘L'Uscoque’ is set at the turn of the 17th century. A young Venetian, Orio Soranzo, marries Admiral Morosini's daughter, Giovanna. He receives a large fortune and a military rank as a reward. His mission is to combat sea pirates and protect Venetian merchant ships. But, having lost the inheritance of his wife, Orio takes the pirates’ side. While Giovanna is imprisoned in the castle, her husband enjoys the company of a concubine named Naam.

In ‘L'Uscoque’, the eternal confrontation between good and evil will end in fatalities.

First published in 1862, Hugo’s gargantuan historical novel became an instant hit. It spelled out heroism and sacrifice, trickery and love, disgrace and mercy with such raw emotion that some readers skipped meals to have more time for reading the 1,000-plus page novel.

Dostoevsky acknowledged in one of his letters that "contrary to the opinion of all our experts, ‘Les Miserables’ [should be] placed higher than ‘Crime and Punishment’.” 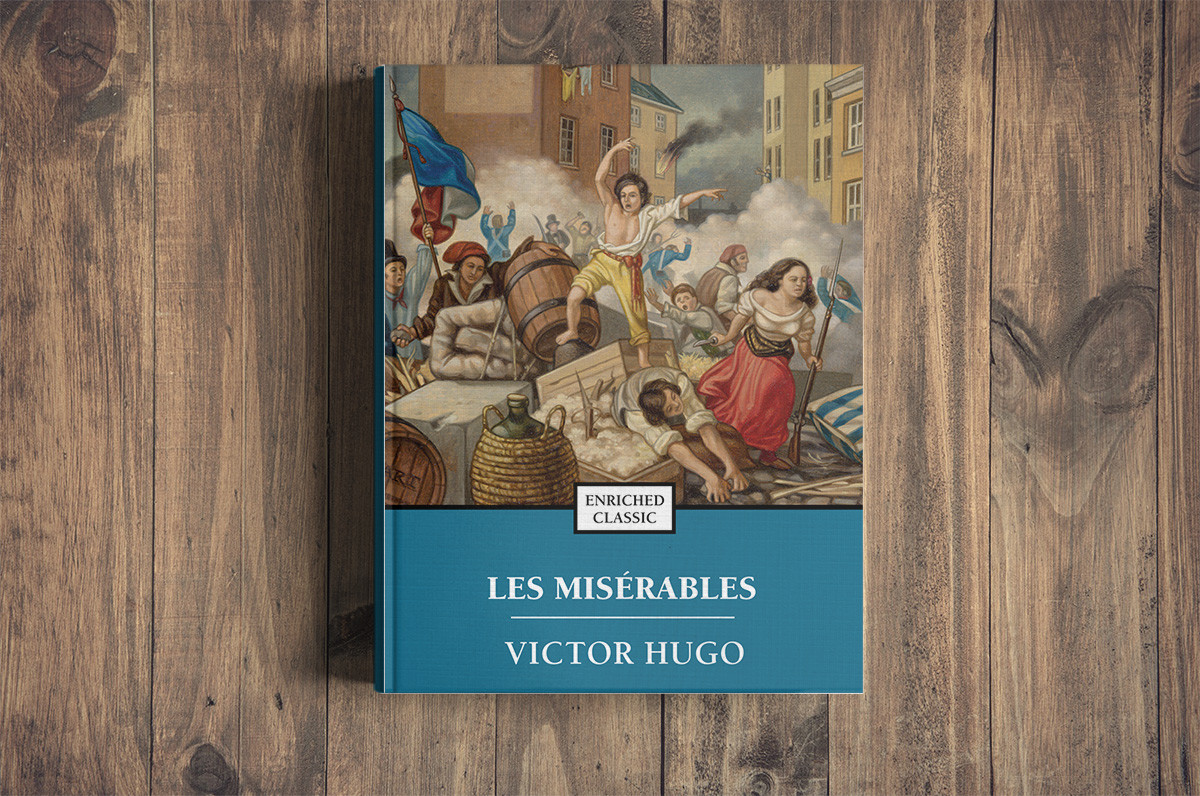 The novel centers on an ex-convict, Jean Valjean, who goes to prison for stealing a loaf of bread. When his 19-year prison term is finally over, his life gets progressively worse. His beggarly clothes and weather-beaten face are repulsive. Valjean is treated like dirt, with every door getting shut on him. Only one person, Bishop Myriel (aka Monseigneur Bienvenu) lends him a helping hand. With intrigue, suspense and plot twists around every page, ‘Les Miserables’ is a novel of great human power and literary splendor.

Dostoevsky valued other works of Hugo, too. He hailed ‘The Last Day of a Condemned Man’ as a trailblazing experiment of "realism on the edge of surrealism", and personally translated Hugo’s short novel into Russian. Interestingly, Dostoevsky compared the French writer with Homer, the author of ‘The Iliad’ and ‘The Odyssey’, claiming that they are united by "an infant’s belief in the God of poetry."

Voltaire (1694-1778) was roughly the same age as the Age of Reason (or the Enlightenment), and eventually became one of its key symbols. His works, written in a light, sharp and witty manner, were aimed against the church and religious fanaticism, the absolute power of kings and despotism. People subscribing to Voltaire’s signature skeptical/sarcastic/liberal views came to be called Voltairians. 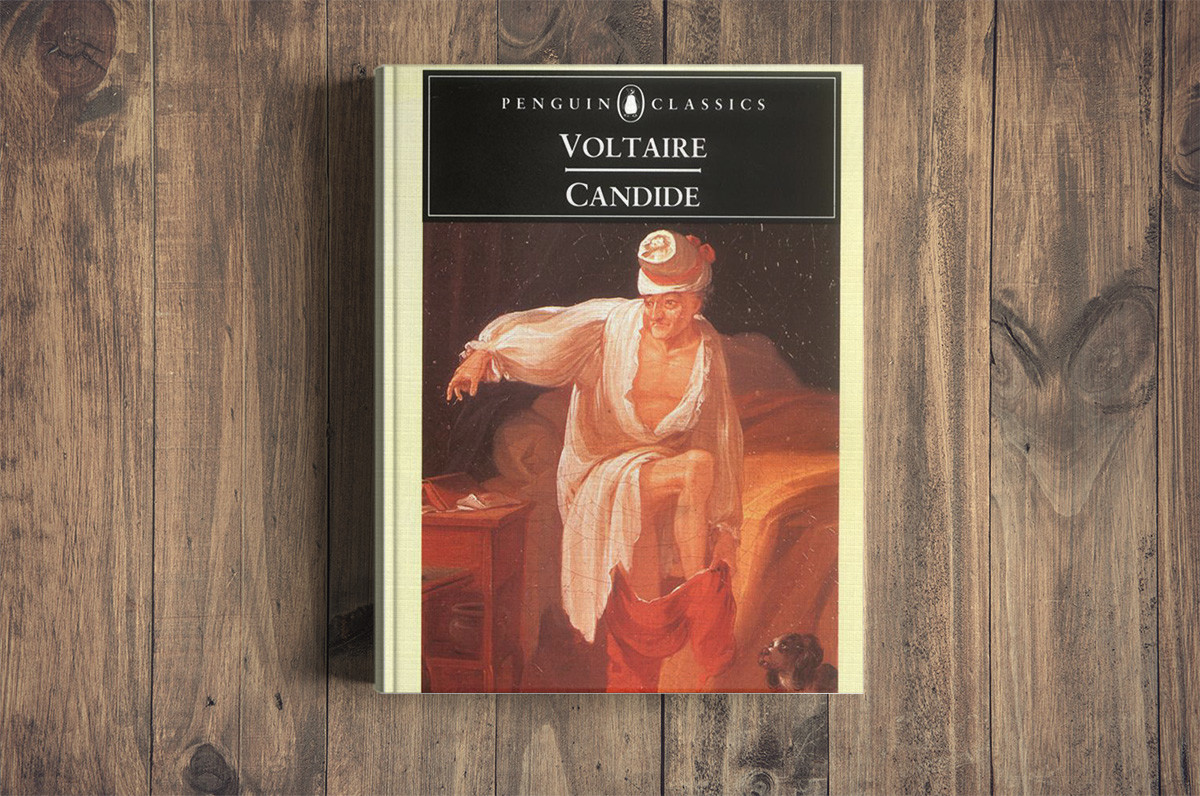 Candide is a young fellow, who blindly believes that whatever happens is only “for the best.” It’s when he is kicked out of the “ivory” castle where he was born and raised, and is forced to start travelling around the world that Candide begins to look at things from a shifted perspective.

Packed with irony and paradox, Voltaire’s short novel is a masterpiece of unparalleled wisdom and depth. In ‘Candide’, the prolific French author (whose real name was François-Marie Arouet) speaks ironically about social norms and conventions, culture and religion, fears and pressures, coming to the conclusion that, although life is pretty damn hard, there is definitely a light at the end of the tunnel.