5 reasons why Dostoevsky is SO great 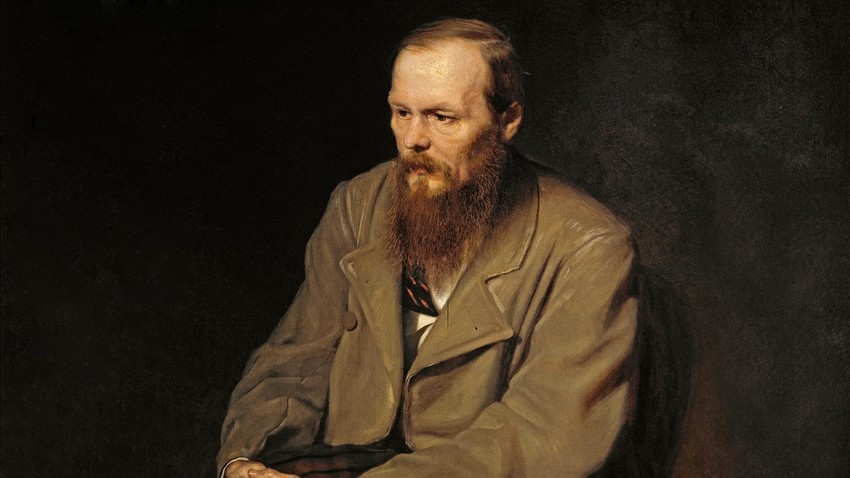 Portrait of Fyodor Dostoevsky, by Vasily Perov, 1872.
A great thinker. A true believer. An intrepid explorer of the darkest corners of the human mind. The man who conceived the world’s most famous literary equation – ‘Crime and Punishment’. One hundred and forty years after his death, Fyodor Dostoevsky is still a source of great national pride in Russia and a magnet for bibliophiles across the world.

“Dostoevsky is a horseman in the desert with a quiver of arrows. Blood drips where his arrow hits. Dostoevsky lives in us. His music will never die,” Vasily Rozanov, one of the most influential Russian philosophers of the 20th century wrote in 1912. Here are the top five traits of Fyodor Dostoevsky’s personality which made him so great.

Dostoevsky (1821-1881) explored the human psyche as thoroughly as Christopher Columbus explored the Americas. He is considered the first who managed to reach down into the deepest depths of the troubled Russian soul. 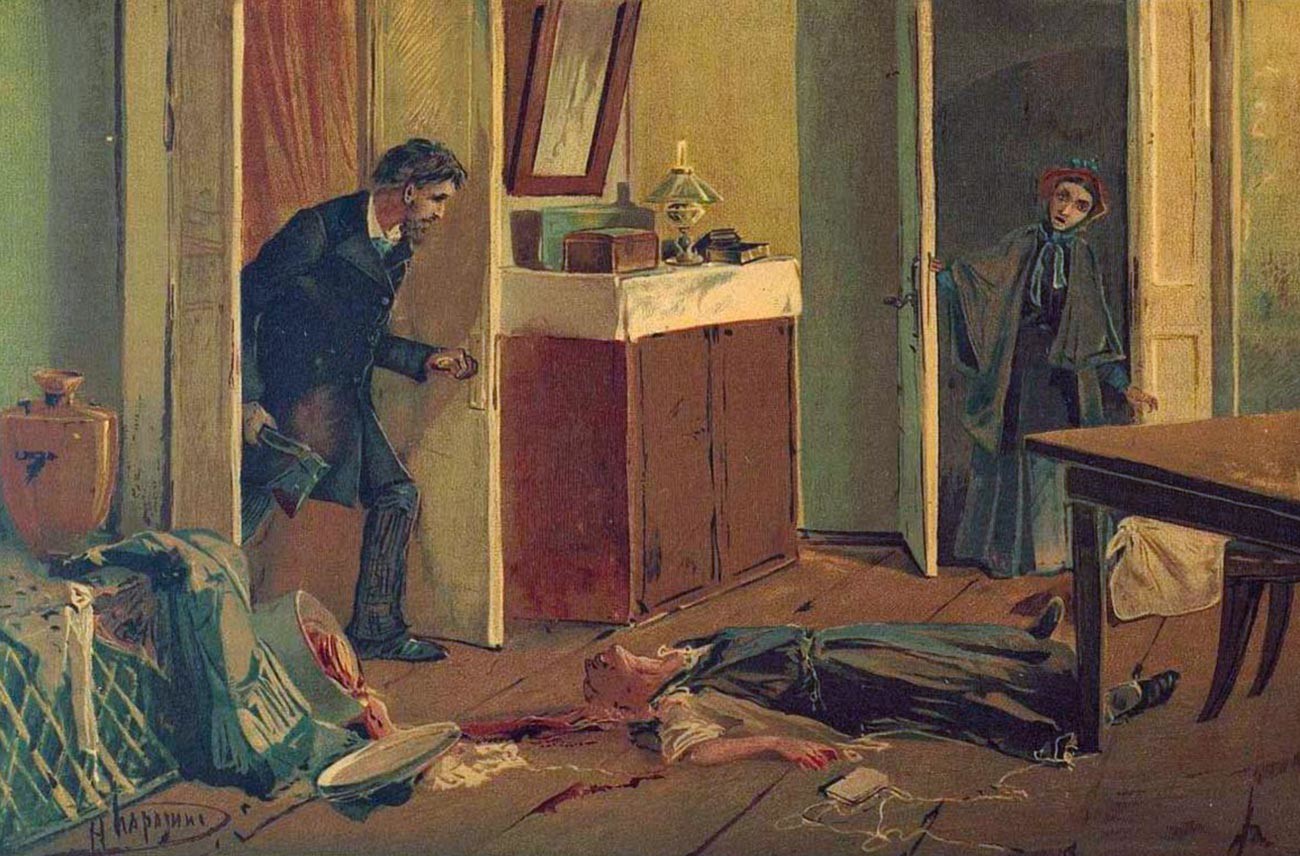 Illustration to 'Crime and Punishment'.

Dostoevsky’s novels are populated by characters full of angst and misery. The workings of the human mind intrigued Dostoevsky throughout his entire life. Each of his masterpiece novels, including ‘The Brothers Karamazov’, ‘Crime and Punishment’, ‘The Idiot’, ‘Demons’ and ‘The Gambler’, is basically an introductory psychology course.

His characters, by far and large, are emotionally broken and mentally bruised. They suffer from guilt (Rodion Raskolnikov) and anxiety (Mitya Karamazov), jealousy (Parfyon Rogozhin) and greed (Ganya Ivolgin), goodness and low self-esteem (Prince Myshkin) and a lack of love (Sonechka Marmeladova). And yet, they are ready to go through emotional hell in their quest for moral freedom and cosmic justice.

“What is hell? I maintain that it is the suffering of being unable to love,” Dostoevsky wrote in ‘The Brothers Karamazov’, his last novel. The foremost writer used his characters’ weaknesses to explain the metaphysical nature of the world, just like Isaac Newton used math to explain motion and gravity.

“If you want to conquer the whole world, conquer yourself,” Dostoevsky stated in ‘Demons’. He definitely did.

In his essay written in 1906, Russian poet and thinker Dmitry Merezhkovsky hailed Dostoevsky as a “prophet of the Russian revolution”. The problem is, Dostoevsky’s novels are infused with layers and layers of meaning, so readers sometimes need to distance themselves from his works for prophesies to reveal themselves. 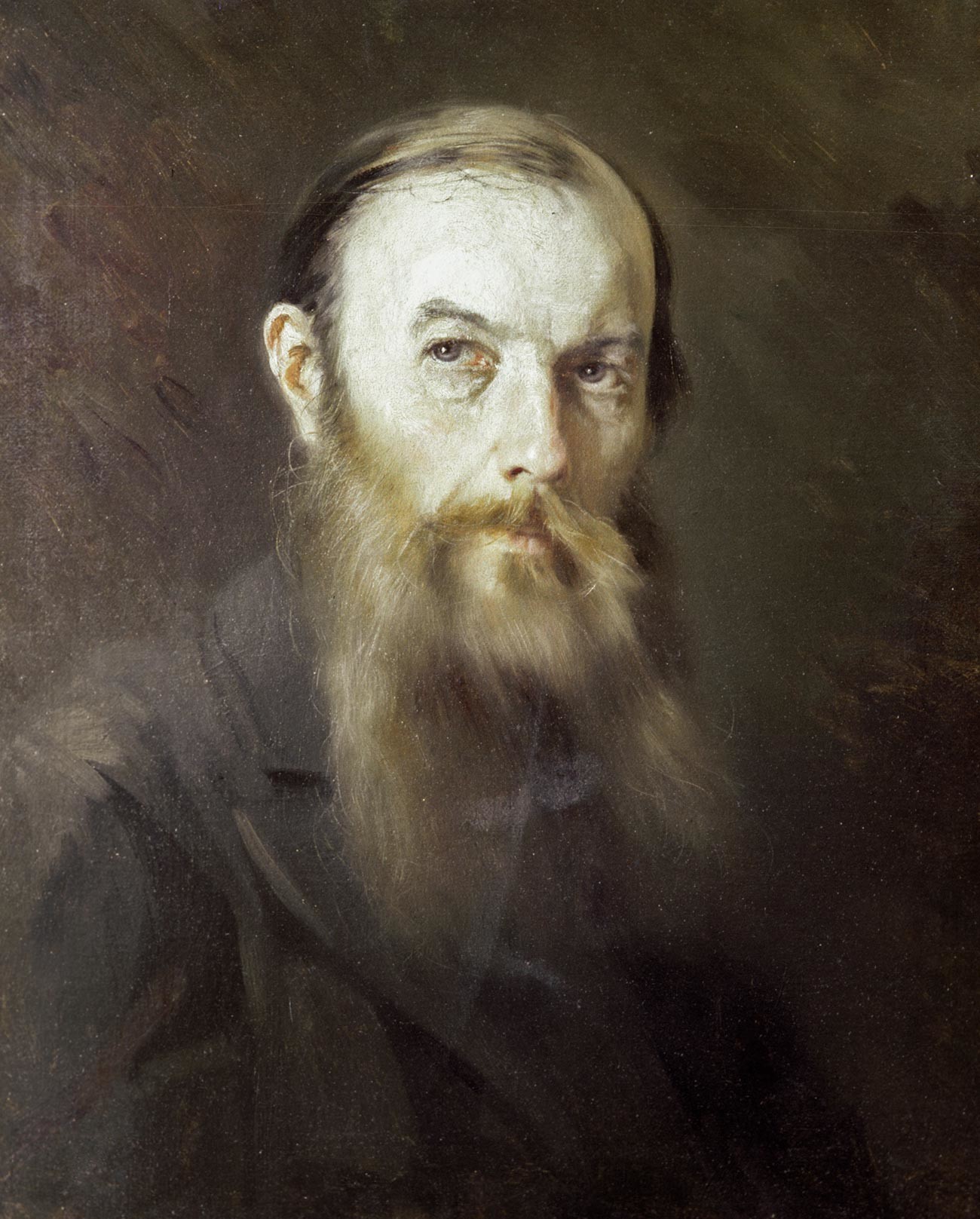 Reproduction of the portrait of Fyodor Dostoevsky, by M. Shcherbatov.

People with imagination can often foresee the future and, yet, no one is a prophet in their own land, according to the Bible. Although Dostoevsky never took himself for a prophet, he managed to encapsulate the crucial problems of his time and map out the trajectory of people’s lives and their evolution.

“His ability is striking. Without seeking the cosmic scale and human masses of [Tolstoy’s] ‘War and Peace’, Dostoevsky takes only a minuscule amount of a life material - the life of several people in a span of several days - and creates a book of great importance and power,” Alexander Solzhenitsyn concluded after rereading ‘Crime and Punishment’ in 1947. The main character in ‘Crime and Punishment’ is a new type of person, possessed by nihilistic ideas. Rodion Raskolnikov allows himself to shed “blood according to conscience”. Later, a group of Russian revolutionaries would respond to Raskolnikov’s outrageous motto, committing acts of terror “according to their conscience”.

With far-sightedness worthy of Sigmund Freud, Dostoevsky penetrated into the nuts and bolts of moral codes, social mores and cultural traditions that run through generations. His ‘Grand Inquisitor’ poem (sandwiched inside ‘The Brothers Karamazov’) is an anticipation of how an ideological state takes upon itself all moral rights, depriving a person of freedom and justice. This political system was implemented in the 20th century, at great cost and in various totalitarian states. 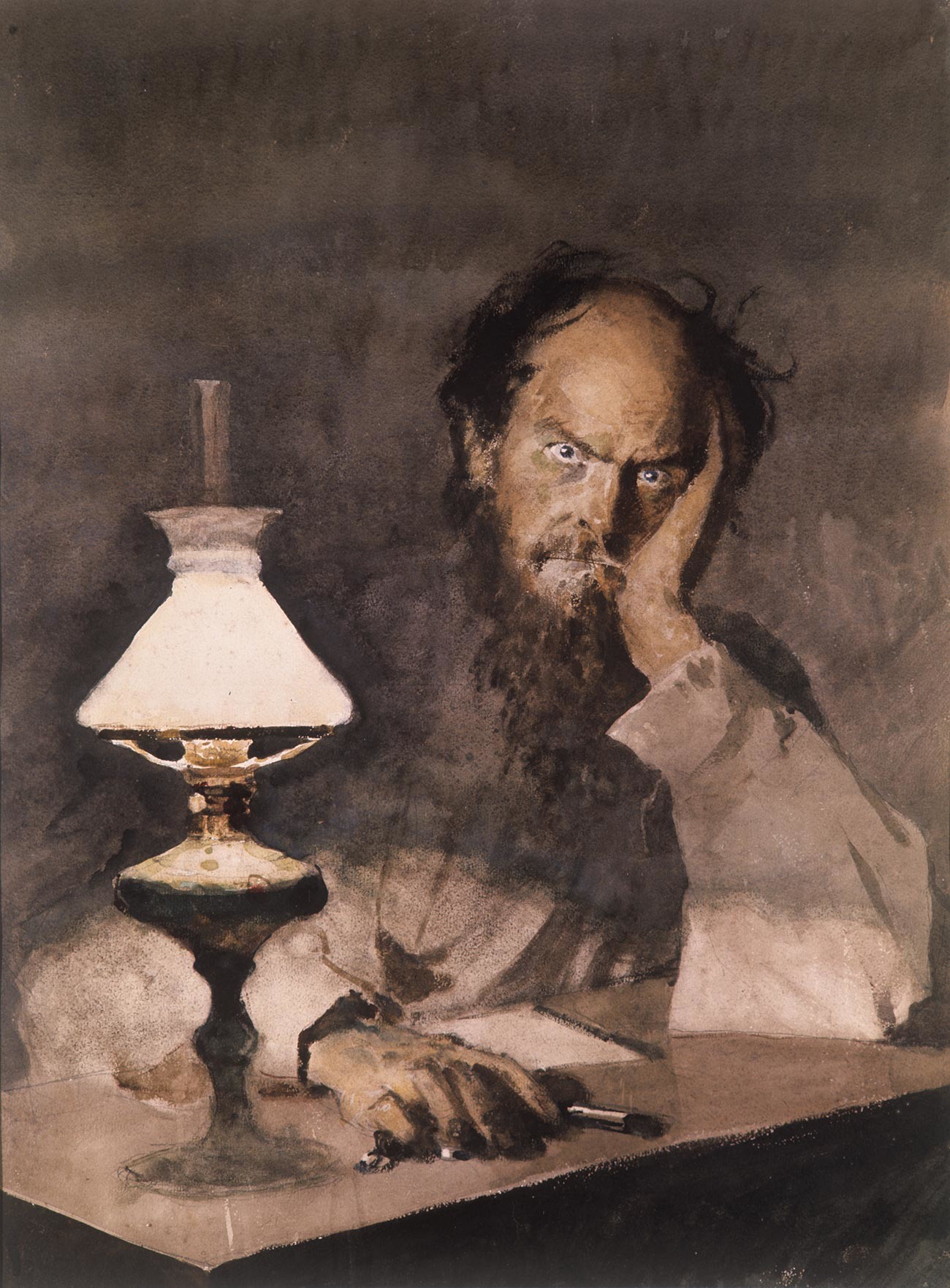 Reproduction of the illustration to 'Demons', by M. Durnov.

In ‘Demons’ (a novel about the devilish temptation to revamp the world, about demonic possession by the forces of evil and destruction), Dostoevsky predicted the spread of nihilism, chaos and hatred. “Each member of the society checks and reports on one another... Everyone belongs to everyone and everything to everyone. All are slaves, and are equal in their slavery. In extreme cases, slander and murder and, most importantly, equality,” Dostoevsky predicted.

“Only the necessary is necessary – henceforth that is the motto of the whole world… Slaves must have rulers. Complete obedience, complete impersonality,” he wrote in ‘Demons’.

“The enthusiasm of today’s youth is as pure and bright as it was in our time. Only one thing has happened: a shift of goals, the replacement of one beauty with another! The entire misunderstanding lies merely in the question of, which is more beautiful: Shakespeare or a pair of boots, Raphael or petroleum?”

The list is long and still growing. Dostoevsky was an influencer in the true sense of the word. His words shoot straight to people’s hearts through centuries and across cultural boundaries. His powerful voice blended misery and passion, suicide and love, tragedy and sacrifice. 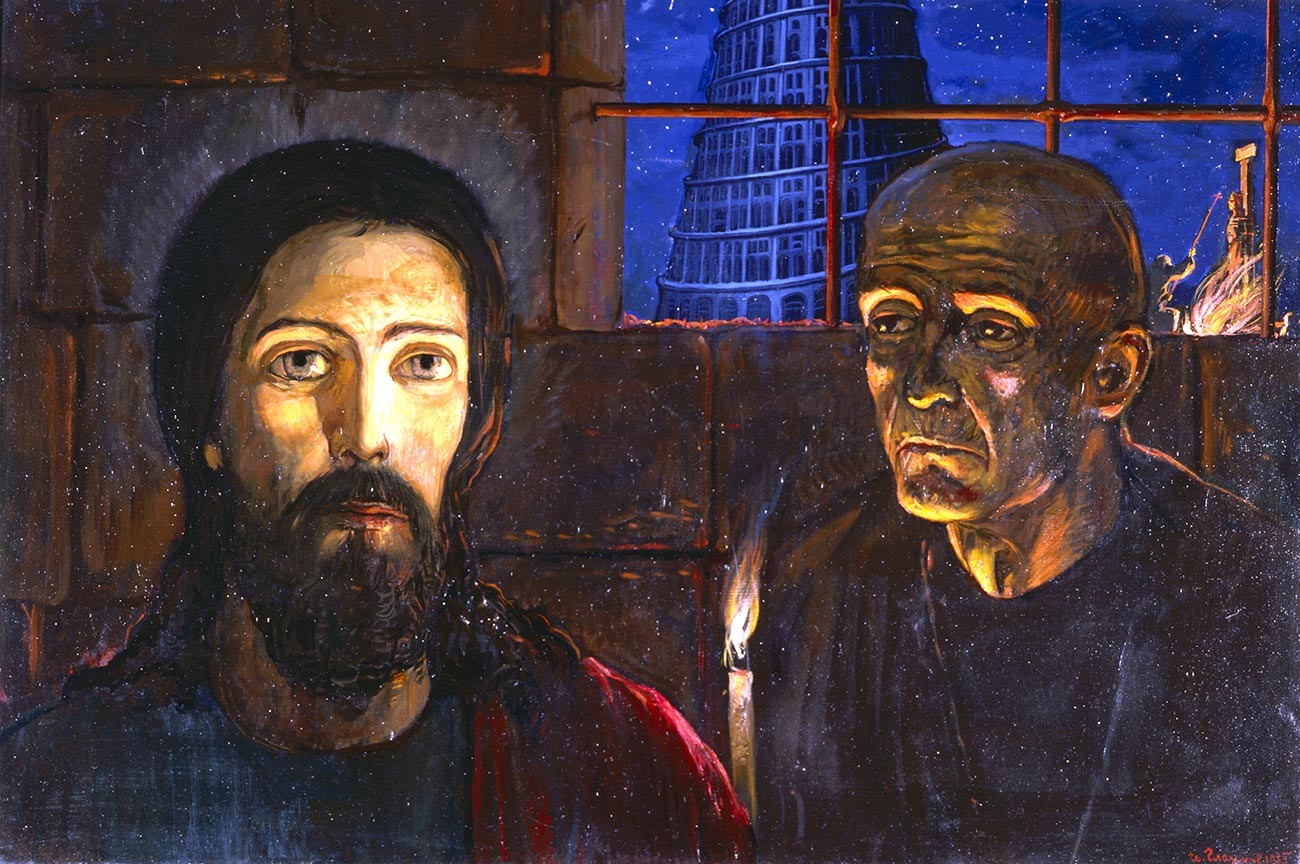 Reproduction of 'The Grand Inquisitor' painting, by Ilya Glazunov.

D.H. Lawrence, Virginia Woolf and William Faulkner were in awe of Dostoevsky’s ability to enthrall, hypnotize and read minds. According to James Joyce, Dostoevsky “created modern prose, and intensified it to the present-day pitch”. Franz Kafka, a fan of ‘The Brothers Karamazov’, called Dostoevsky his “blood relative”. Ernest Hemingway cited the man behind ‘The Idiot’ as one his major influences: “In Dostoevsky, there were things unbelievable and not to be believed, but some so true they changed you as you read them.”

Having read ‘Notes from the Underground’ and ‘The House of the Dead’, Friedrich Nietzsche described Dostoevsky as the “only psychologist I have anything to learn from”. Acclaimed Russian thinker and philosopher Lev Shestov came to the conclusion that Dostoevsky and Nietzsche share a peculiar sameness of spirit and, therefore, Dostoevsky and Nietzsche “can, without exaggeration, be called brothers, even twins”. 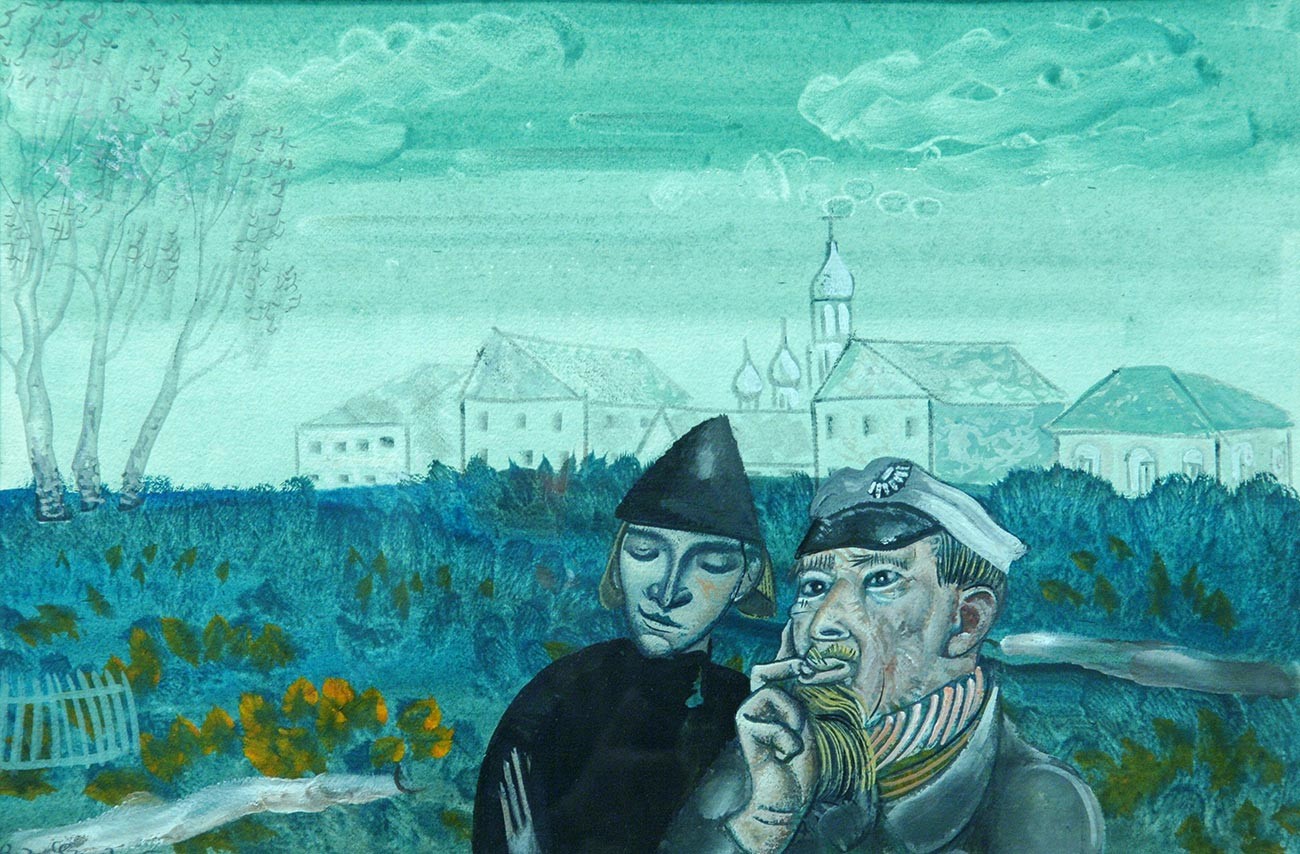 Illustration to 'The Brothers Karamazov', by Boris Grigoriev.

Dostoevsky, who fought his inner demons on a daily basis, was doomed to the psychiatrist’s couch and none other than Sigmund Freud psychoanalyzed the Russian writer in his famous essay ‘Dostoevsky and Parricide’, which was published in 1928 as an intro to a German collection of materials on ‘The Brothers Karamazov’. Freud wouldn’t be Freud if he hadn’t focused on Dostoevsky’s Oedipus complex and relations with his father, his epileptic seizures, religious views and a 10-year addiction to gambling.

Echoing the ideas of trailblazing Danish philosopher Soren Kierkegaard, who placed a single and lonely person at the center of his philosophy, Dostoevsky discovered the true inner person. “Misfortunes leave a certain mark of pride on the character, unless it is finally broken by them,” Kierkegaard believed. “Man is unhappy, because he doesn’t know he’s happy, only because of that,” Dostoevsky fired back. Dostoevsky and Kierkegaard never met and had no knowledge of each other. 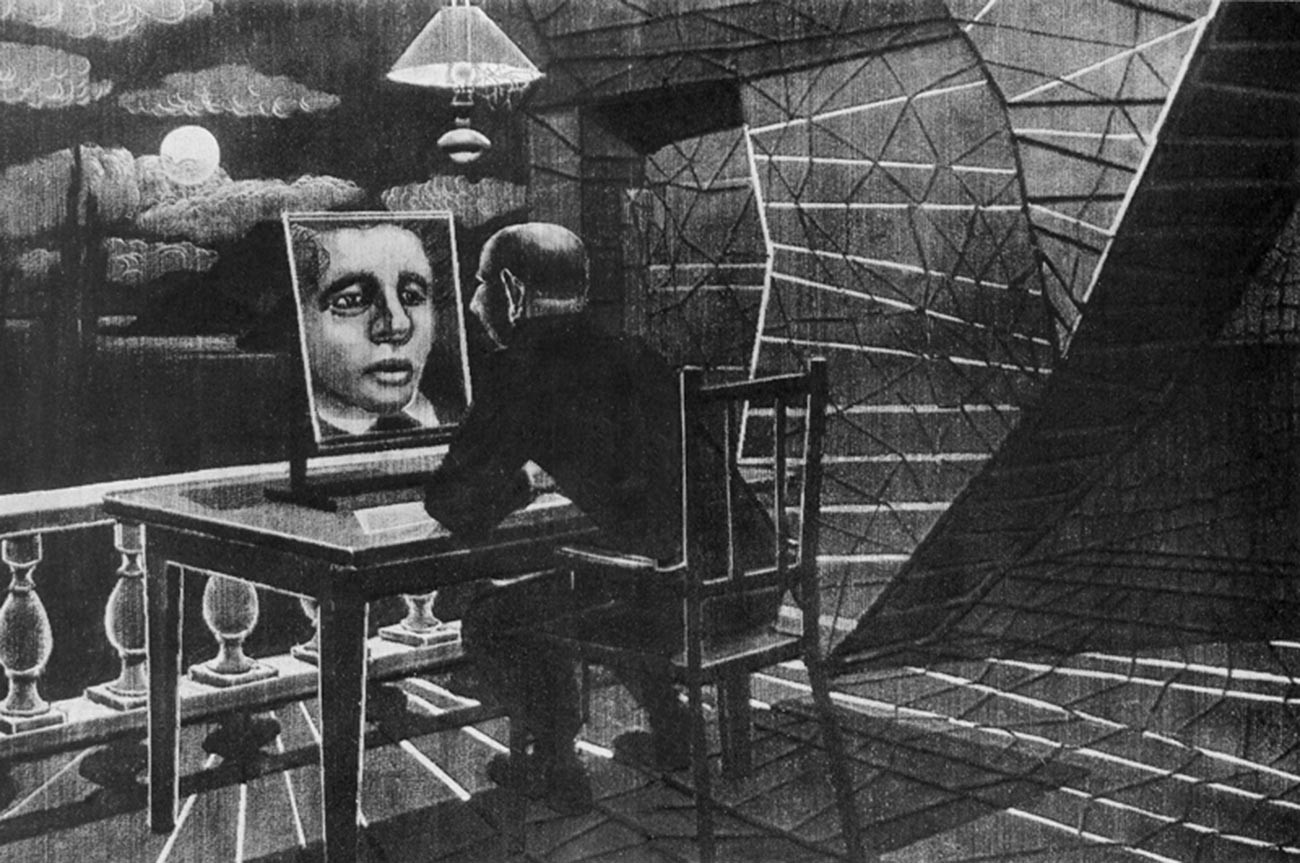 Illustration to ‘Notes from Underground’.

In 1863, Dostoevsky wrote what appeared to be the first existentialist novel, ‘Notes from Underground’, whose narrator set his strikingly nervous tone in the opening paragraph. “I am a sick person... I am an evil person. I’m an unattractive person.” The leading Russian philologist of the 20th century, Mikhail Bakhtin, called this dostoevskian manner of discourse “a word with a loophole”.

It’s a literary mille feuille: a confession of a former St. Petersburg official and a philosophical story about the essence of human life; a tragic tale about the nature of our desires and a drama about the sick relationship between reason and inaction. The “underground man”, devoid of a name or surname, argues with his imaginary and real opponents and reflects on the reasons for human actions, progress and civilization. Paranoid, pathological, pathetic, poor, he is a loner most afraid of being discovered.

The ideological core of ‘Notes from the Underground’ is the main character’s dispute with the most famous scientific theories of the mid-19th century and Dostoevsky’s fundamental idea of ​​the need for Christian faith and self-denial.

Dostoevsky’s short novel gained worldwide recognition only by the middle of the 20th century: it turned out to be an overture to existentialism, while his underground man became the literary godfather to signature characters by Sartre, Camus and other European authors, as well as filmmakers.

Dostoevsky was a man of contrasts, whose ideas were obviously ahead of the curve. He was a deeply religious man, an Orthodox Christian, who invoked God’s name in his works as often as others mention their last name. The writer described Jesus as “the ideal of man in the flesh”, but his attitude to religion and faith underwent a notable shift. 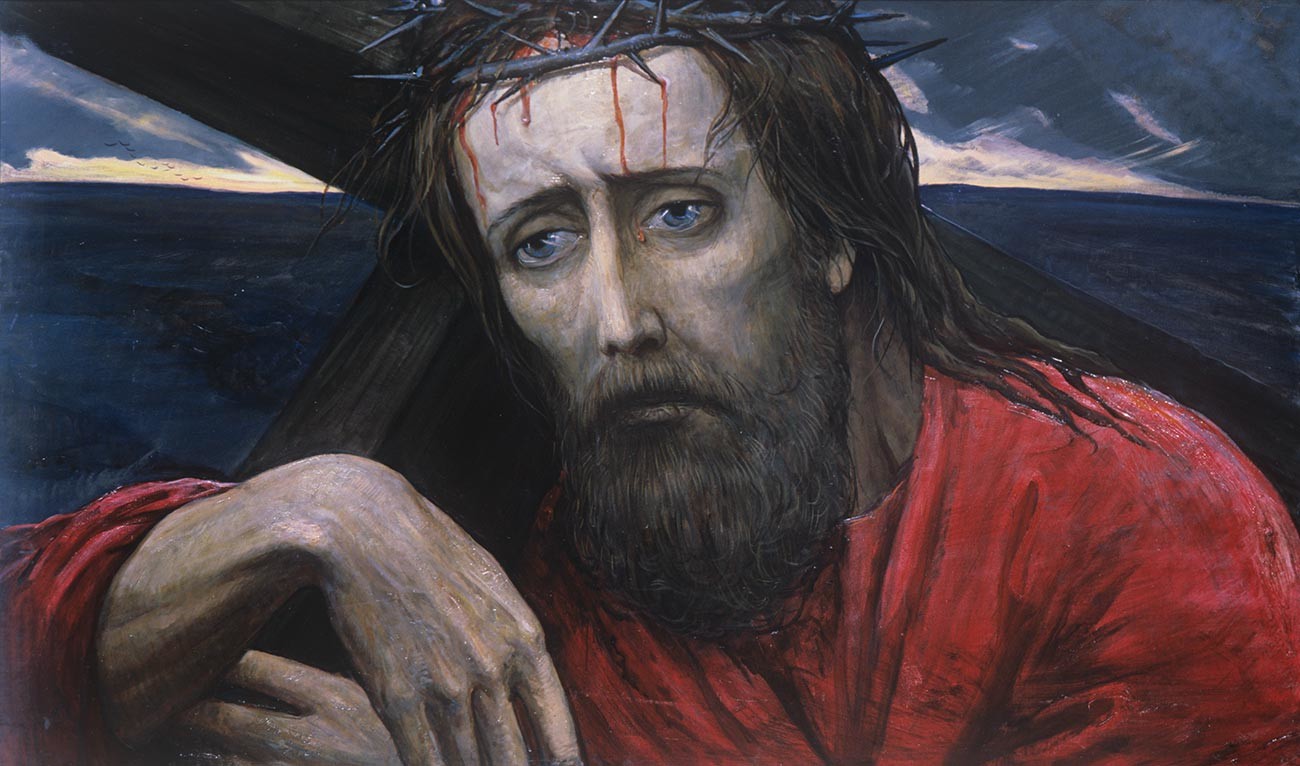 Illustration to 'The Brothers Karamazov', by Ilya Glazunov.

Some historians claim that in his youth, Dostoevsky was more interested in socialist ideas, rather than in religion, while others assert that he was fervently religious since childhood. One thing is certain: Dostoevsky was deeply moved by his prison experience.

In 1849, the writer was arrested for his involvement with the Petrashevsky Circle, a group of radical St. Petersburg intellectuals who criticized the socio-political system of the Russian Empire and discussed ways to change it. In 1850, 28-year-old Dostoyevsky (who by that time had already published two novels, ‘Poor People’ and ‘The Double’) was sentenced to death along with 20 other members of the youth movement. In a strange twist of fate, the sentence was commuted at the very last minute. The mitigation of punishment came as a massive shock and became a life-long memory that Dostoevsky would never forget.

The writer spent four years of hard labor in a Siberian prison, after which he was sent as a private to the 7th line battalion in the Siberian Army Corps. This dramatic experience helped Dostoevsky understand the true value of human life. It became clear to him that every person, at any moment in time, actually trembles on the brink of eternity.

“Immortality of the soul and God are one and the same idea,” he wrote in one of his letters, in 1878. “I already need God because this is the only being that can be loved forever,” Dostoevsky summed up in ‘Demons’.