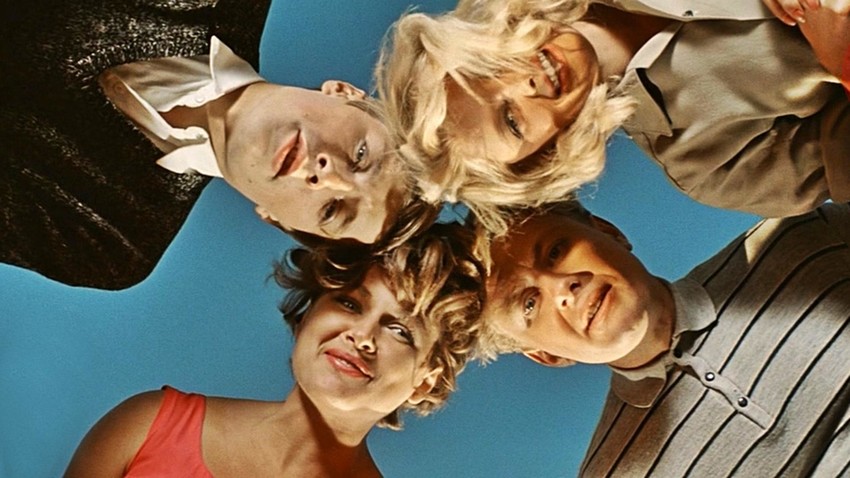 Genrikh Oganisyan/Gorky Film Studio, Riga Film Studio, 1963
Sharp dialogue, broken hearts and engaging plot twists are the stuff that romantic movies are usually made of. When passions run high, just hang on and watch what unfolds.

This timeless battle of the sexes is full of quotable dialogue and rapid-fire wit. While the plot seems quite simple, it allows for some hilarious and punchy situations. 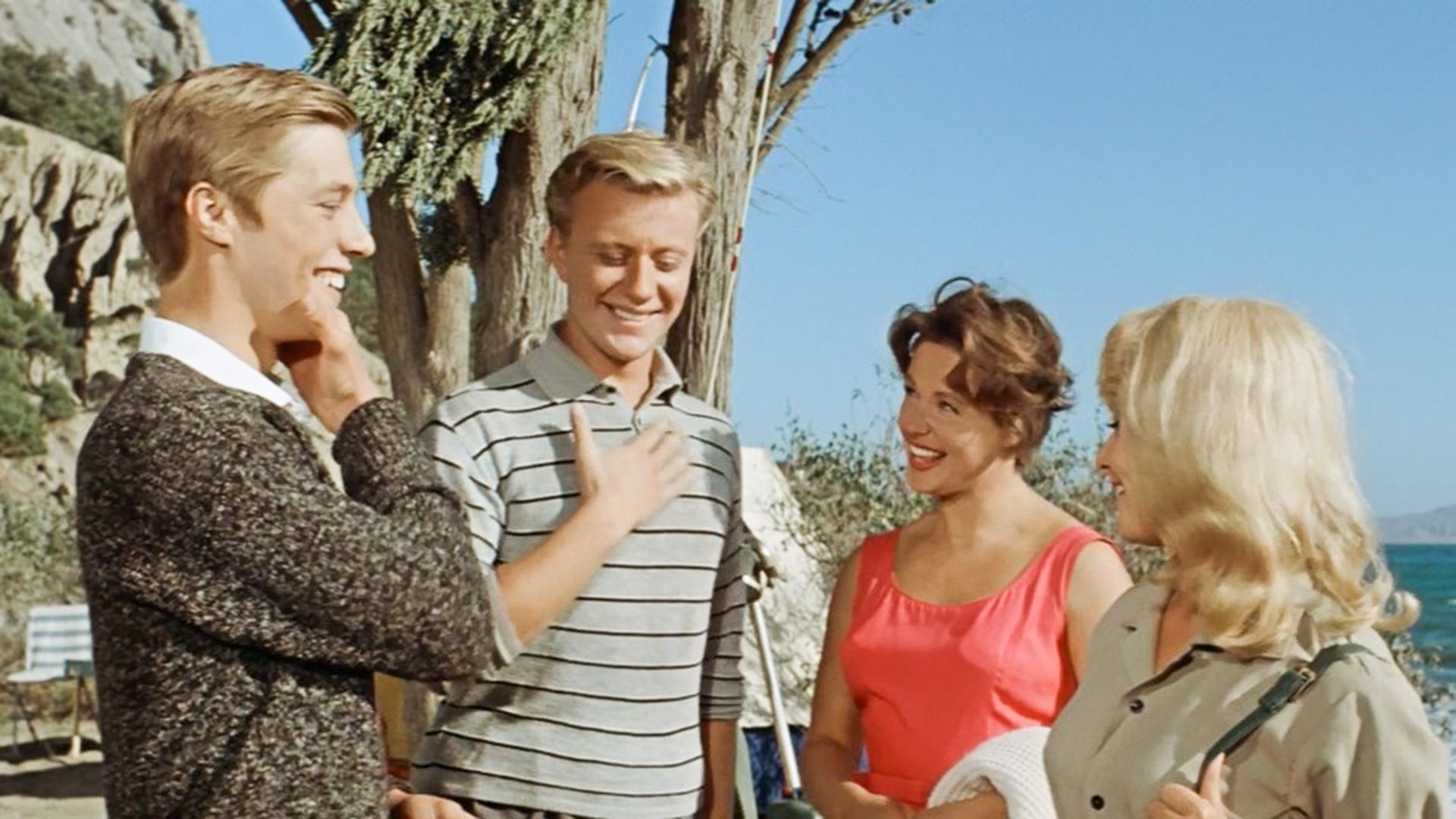 The perky romcom is set in the mid-1960s. Three best buddies go camping on the Black Sea coast by car. They set up their tents in a deserted area and establish a beachhead away from fellow tourists. They enjoy themselves, until their privacy is hijacked by two brassy ladies who claim their rights to the picturesque Crimean site.

The movie puts under the spotlight several types of characters: the vulnerable and romantic veterinarian Roman (portrayed by Andrei Mironov), the charming diplomat Vadim (Evgeny Zharikov) and the strict professor of physical sciences Stepan Sundukov (Gennady Nilov). On the other side of the debate, there’s the slightly naive actress Natasha (Natalia Kustinskaya) and the self-assured tiger-tamer Zoya (Natalia Fateeva). As always, no one wants to back down, with the two beauties determined to oust the three men from the seashore at any cost. Each side is fighting for their place in the sun. No matter how hard they fight, love and friendship coupled with wit and charm will win in the end.

Movie director Genrikh Oganisyan allowed his actors to improvise on set. His style is so subtle and authentic that you forget you’re actually watching a movie!

Mark Zakharov’s sweet-natured romantic comedy is based on the play by Evgeny Schwartz, the author of ‘The Dragon’. It means that you will probably find answers to a lot of questions in this emotionally complex “miracle” of a movie. 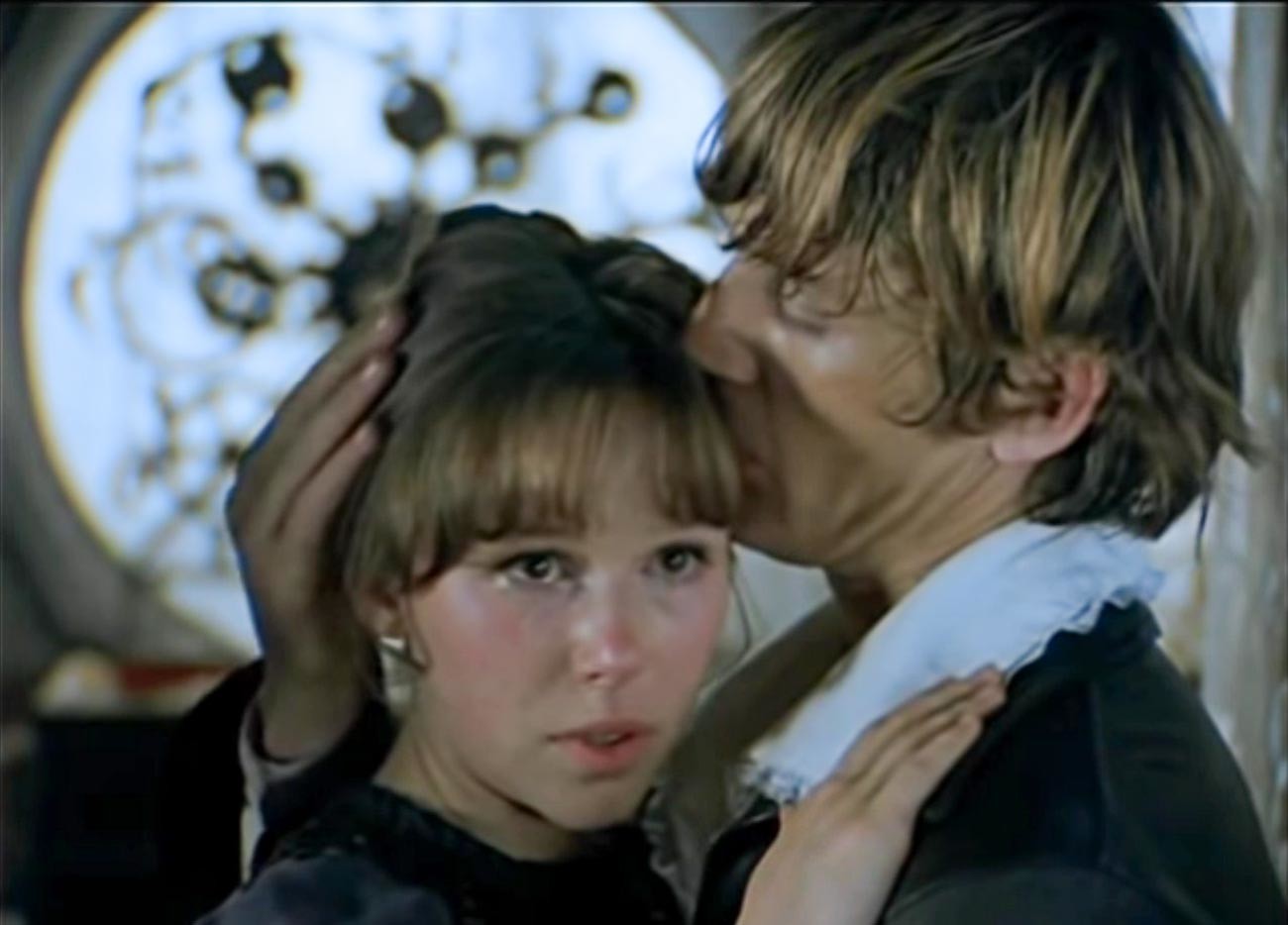 On one level, it’s a love story of a princess and an enchanted bear. Paradoxically enough, the fairy-tale characters are not caricatures but seem to be painted from life. They remind us of our close friends, neighbors and family members. A king who worships his daughter; a cynical chief minister who is a bit of a womanizer; a disheveled lady-in-waiting whose personal life is a mess; a hunter crying before firing a shot; a restless wizard and his wise exhausted wife.

One of the most powerful scenes is a conversation between the Bear and the Princess. “You hug me like you have a right to. And I like it very much.”

‘An Ordinary Miracle’ is a movie that brims with wisdom and warmth.

Eldar Ryazanov romance pairs Lyudmila Gurchenko and Oleg Basilashvili as a hapless barmaid and a refined pianist who fall in love despite the odds. 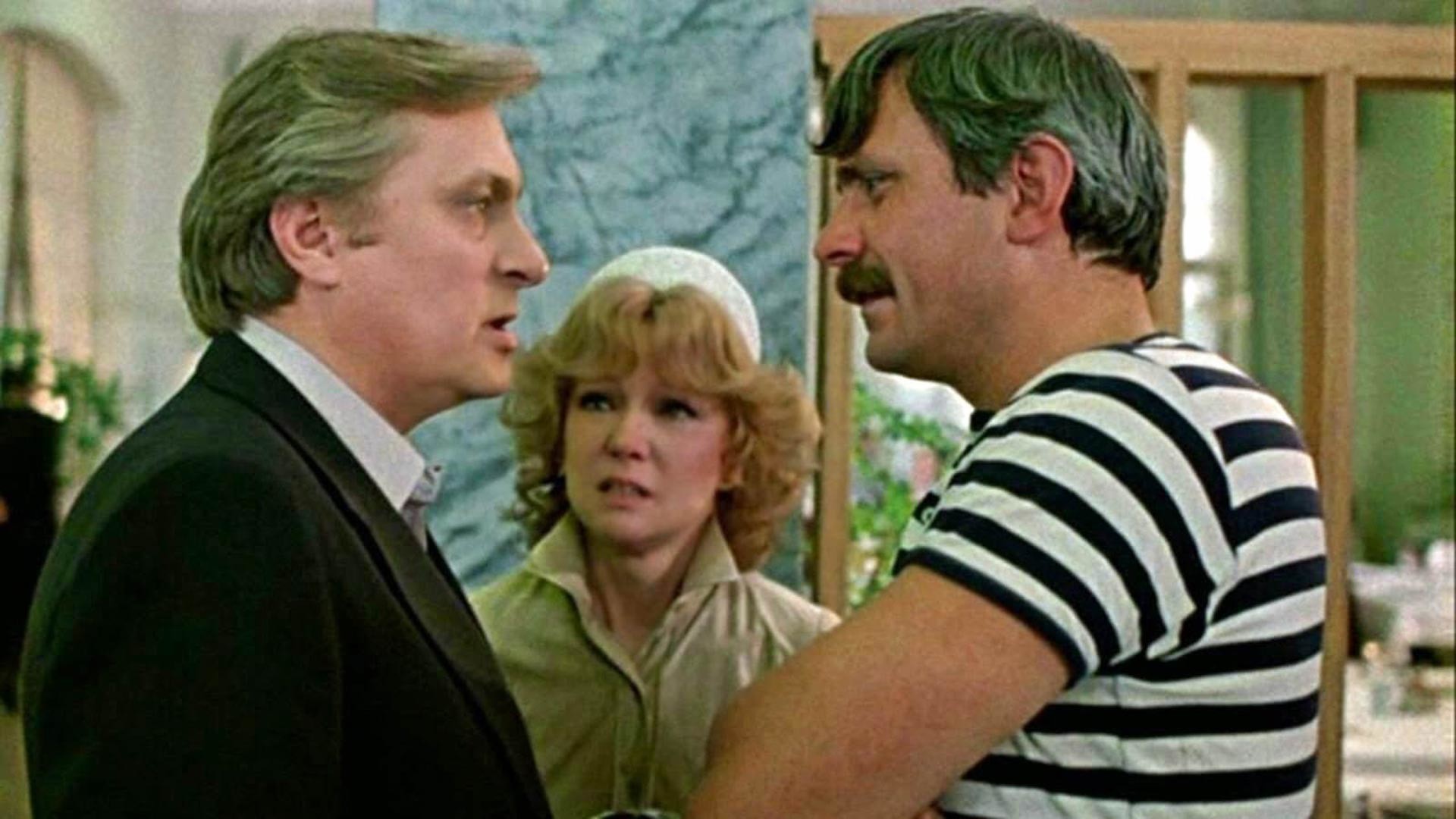 Vera and Platon meet at the provincial station restaurant somewhere between Moscow and Almaty. They are two lonely fortyish souls in search of true meaning. As a result of their accidental encounter, Vera will lose her selfish fiancé (brilliantly portrayed by Nikita Mikhalkov) and will find the love of her life, Platon. But it's not all happiness and dancing in the moonlight. The ill-fated pianist will first have to go to prison and complete his sentence for a crime he didn’t commit.

Although, at first, it seems that ‘Station For Two’ is just about a relationship between a man and a woman, at the end of the day, it’s about a good faith effort to hear and understand each other. The wisdom of the movie comes down to the line from a song by Andrei Petrov titled ‘Don’t be afraid to change your life!’

This inspirational drama is about the value of existence and human capabilities. 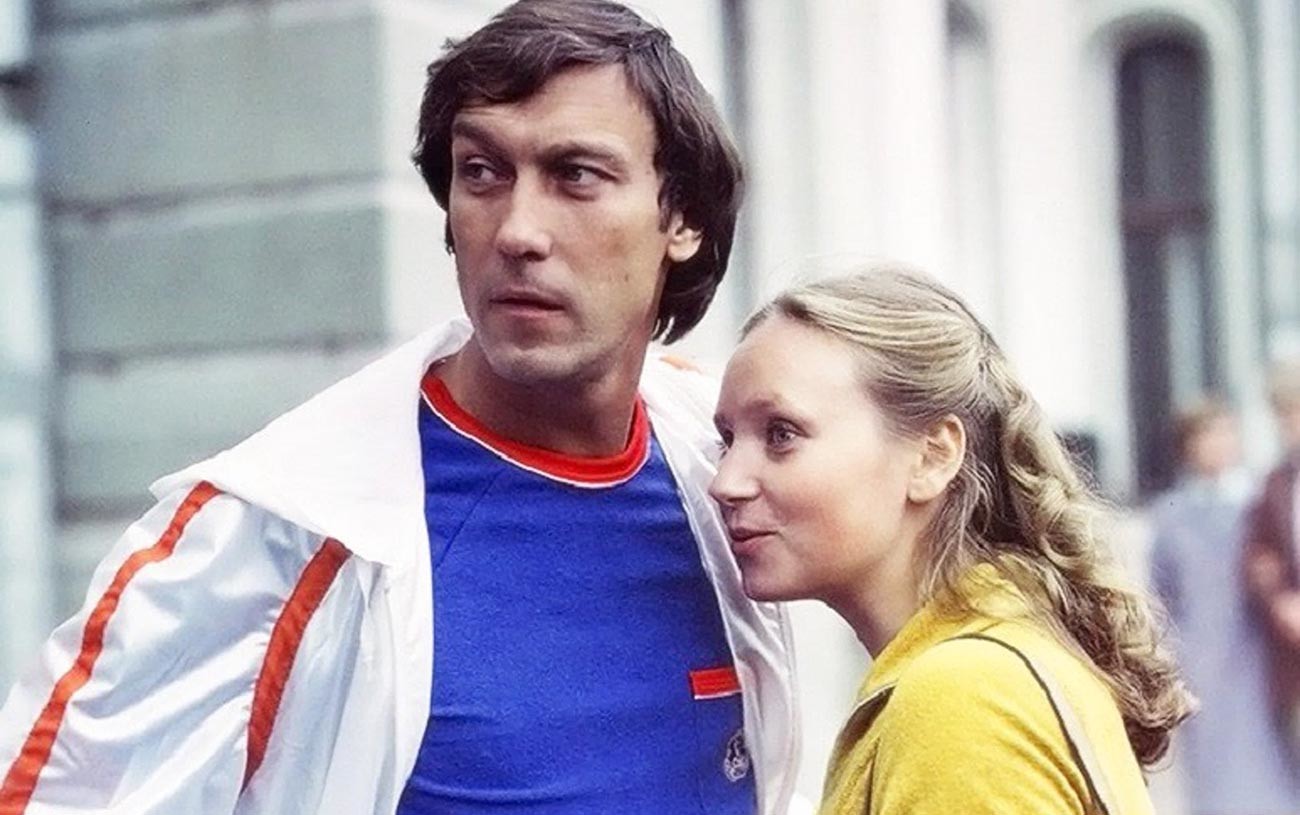 Igor (portrayed by Oleg Yankovsky) is a handsome former athlete, who now works at a factory and is gradually ruining himself by drinking. Women only see an ex-professional sportsman in him, his life is empty and he is alone. Vera (Evgenia Glushenko) is the complete opposite of Igor. She is reasonable, disciplined and optimistic. The only problem is, she is not a great beauty and is not very popular with men. Loneliness is killing both of them, separately, but surely. Is it possible to find unconditional love when you desperately need it, like oxygen? It turns out that there’s nothing impossible in life. If you have a goal, you can make it happen. And Vera will teach Oleg a good lesson in faith, love and humanity.

A factory worker from a provincial town dreams of becoming a famous actress. In the meantime, she plays the witch Baba Yaga at a local amateur acting club. One day, the wannabe actress, whose name is Pasha Strogova, gets noticed by a director from Moscow, filming a movie about Joan of Arc. 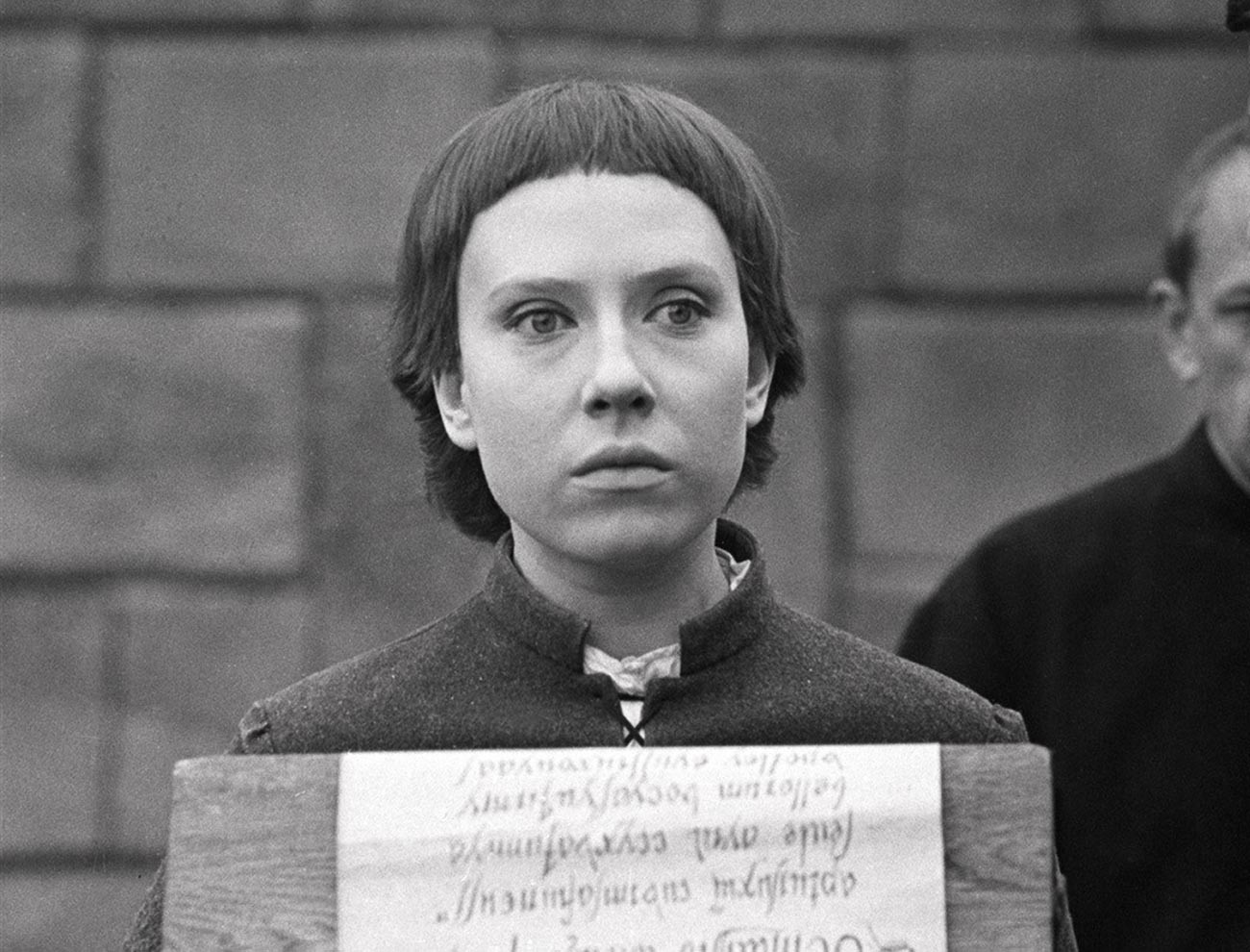 All of a sudden, Pasha is offered the lead role and her life changes forever.

‘The Debut’ is a captivating romantic drama about the difficulties of love with a touching ending. One of the greatest actresses of her generation, Inna Churikova, brought great charisma and wisdom to the mosaic-style movie.

In 1971, director Gleb Panfilov received the Silver Lion award for ‘The Debut’ at the Venice Film festival. Churikova, meanwhile scooped the coveted Golden Lion for her multi-layered portrayal of Pasha.