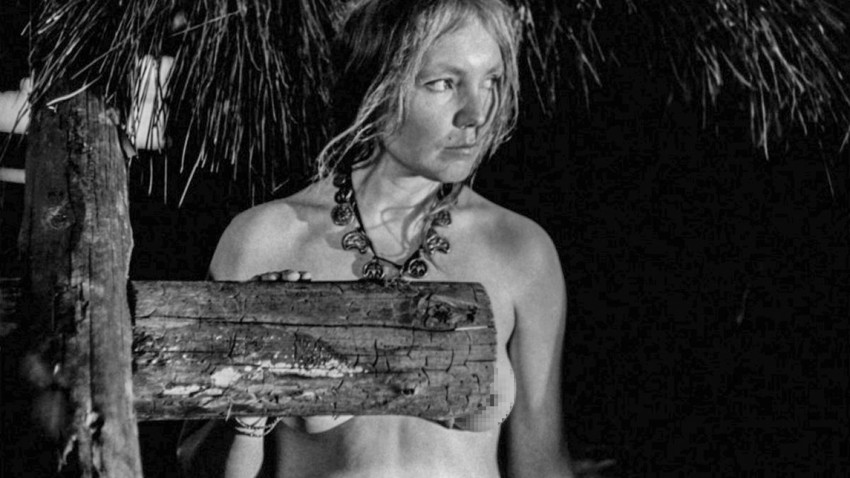 Let’s be honest, ‘sex’ was a dirty word in the Soviet Union. Depictions of sex on screen were nearly as rare as Mercedes cars on the roads in the USSR. Even a passionate kiss was taboo, not to mention sexual intercourse of any kind. As a rule, Soviet actors were even too shy to undress. Many were brought up by strict (communist) parents, who instilled in their children an unshakable sense of idealism and moral code. By far and large, actors in the USSR were not comfortable about being naked in front of a partner on set and it showed. Sex scenes were devoid of realism and almost totally devoid of passion.

But there were some exceptions. Legendary director Aleksandr Dovzhenko made waves when he dared to completely undress Soviet actress Elena Maksimova, who starred in his 1930 silent masterpiece ‘Earth’.

There is a powerful scene in the poetic film where the beautifully sensuous actress runs around the house in her birthday suit. The naked woman laments the death of her fiancé, Vasil. Her emotional grief is palpable and heartbreaking.

Revered auteur Andrei Tarkovsky, often referred to as the most important filmmaker of Soviet era, went even further in his 1966 masterpiece ‘Andrei Rublev’. Set in mediaeval Russia, the drama focused on Russia’s most quintessential painter of icons, Andrei Rublev.

Tarkovsky’s epic movie is a symbiosis of scrupulously-framed cinematography and emotive storytelling. In ‘Andrei Rublev’ Tarkovsky created 15th century Rus’ anew. The drama is a detailed, timeless portrait of the life of Russian people. For the first time in Soviet cinema, a large-scale image of the spiritual and religious side of medieval Russia was under a bright spotlight.

In one particularly revealing scene, a woman named Martha (Nelli Snegina) approaches Andrei Rublev, who is tied to a cross during a pagan holiday. The woman unties the painter, her naked body wrapped only in a fur coat. Martha starts a conversation with Rublev (portrayed by Anatoly Solonitsyn) about free love and tries to seduce him. “It’s the night when everyone should love. Is loving a sin?” she wonders.

In another arresting scene, Martha is seen running towards the lake, naked. “The scene in the lake was filmed in the pond on the territory of Mosfilm,” Nelli Snegina recalled. “It was already fall, the water was cool, but the day was sunny. The swans swimming in the pond were temporarily taken away. I had to put on a nude bra, panties and a wig. I began to swim. And then something unexpected happened. One swan didn’t like the fact that someone occupied its territory, so it swam into the middle of the pond, arched its body, stretched out its legs and flapped its wings threateningly. I got scared and went under the water. We had to finish filming the next day, as my wig was hopelessly damaged. Although, this time around the swan was nowhere to be seen, a huge number of people gathered behind the Mosfilm fence, through which the pond was clearly visible. Naked women were not on public display in those days, so the audience was delighted!”

The drama had its semi-legal world premiere at the 1969 Cannes Film Festival and was released in the USSR only in December 1971. To attract audiences, foreign film distributors advertised ‘Andrei Rublev’ with the help of Snegina’s nude scenes from the movie.

In those days, decades ago, Soviet filmmakers faced a lot of challenges. For one, many actors flatly refused to take off their clothes in front of the camera. Contrary to popular belief, male actors proved to be even more shy than their female partners. At the end of the day, actors only flashed their bare chests, while they were wrapped in blankets from the waist down.

Georgy Natanson’s ‘Once Again About Love’ shocked audiences when it debuted in 1968. The movie, based on the play by Edvard Radzinsky, is a psychological story full of romance and drama. The classic parable about love offered a window into a 1960s life in the USSR. The movie starring blond bombshell Tatiana Doronina and male sex symbol Aleksandr Lazarev touched on the relationship between a man and a woman without overused cliches and stereotypes.

READ MORE: 7 Soviet FAMILY movies that are true to reality

Shot in black and white, the movie features many unforgettable moments. Doronina and Lazarev obviously had much chemistry. In one of the memorable scenes, the main characters are seen lying in bed in total darkness, their blanket pulled up to their noses. “I love you, I love you,” she says emphatically, tears on her face. “Do you love me?” Natalia, a flight attendant, asks her lover, an arrogant scientist whose name is Elektron Yevdokimov.

“I do,” the man flatly replies, as if he was asked whether he wants eggs for breakfast.

Needless to say, both actors were fully dressed when the intimate scene was filmed. And yet, without it, the movie would have missed something.

A decade later, in 1979, Soviet disaster movie ‘Air Crew’ generated a lot of buzz. It was, among other things, an attempt to show that love and sex were actually a part of Soviet life and not something to be ashamed of.

Tamara is lying in bed with flight engineer Igor, the womanizer who she is head over heels in love with. They are both half-naked, with Yakovleva exposing her breast. Tamara and Igor’s bodies are intertwined and beautifully reflected in the mirrored ceiling and through the glass of the huge aquarium. This was the only way for Mitta to win the censors’ permission to keep the intimate scene in the movie. While Mitta had made the USSR’s first disaster movie, a number of moviegoers flocked to the cinema to see that hot scene.

It’s hard to believe, but brilliant actor Leonid Filatov initially refused to appear in that episode. The intimate scene became a moral test for the actor. Filatov, who wouldn’t take off his jeans for all the tea in China, eventually slid down in bed with the sexy naked actress being half-dressed.

In the long run, in the mid-1980s, during Gorbachev’s Perestroika, moral principles began to change.

In 'Winter Cherry' (1985), charming actress Elena Safonova is shown naked in the opening scene of the movie. Her character, Olga, is a single mother with a 5-year-old son to raise. The 30-year-old brunette can’t get enough of her married lover Vadim, who is as selfish as a man without genuine feeling. In one sexy scene, Safonova appears completely naked, when she wakes up after a night of love and stands dreamingly by the window of the house by the lake. The scene became a metaphor for the simple pleasure of daydreaming in search of love.

Funny enough, sometimes the best things in life happen by accident. It turns out that the steamy scene where Vera (portrayed by Natalia Negoda, the first Soviet star to appear on the cover of American Playboy in 1989) has sex with Sergei (Andrei Sokolov) was not even in the script! It reportedly took the director seven hours to persuade the young actors to play in that risqué episode. In the long run, Pichul got what he wanted, and his social-realist movie earned its place as one of the most audacious and rousing in Soviet cinema.