7 Soviet FAMILY movies that are true to reality 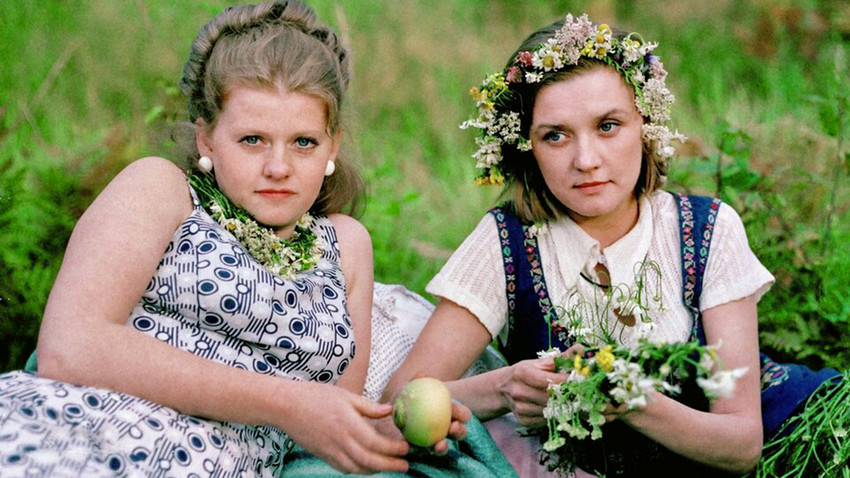 Vladimir Menshov/Моsfilm, 1979
Conflict, comedy, drama, engaging characters, fatherless children and ideal love — some Soviet movies depicted the relations between men, women, parents and other family members better than a thousand words! Let’s find out how close to reality those cinematic masterpieces really were.

In Soviet times, family movies, like other forms of visual art, were meant to reflect aspirations for an ideal society. But, here is the paradox: while most Soviet movies were usually in touch with reality, people, in fact, went to the movies to escape the hard reality.

A huge demographic imbalance that developed in the aftermath of World War II and the repressions of the Stalin era resulted in the destruction of the predominantly male genetic pool and distorted relations between the sexes in the USSR. The problem was that a significant part of a whole generation of Soviet people grew up without fathers. The post-war fatherlessness triggered the formation of radically different relations between men and women. The tragedy of fatherlessness and single parenthood was reflected in a number of Soviet movies during the 1960s-1970s.

The formation of “healthy family relations” was the be-all and end-all of the USSR’s social policy.

In the 1980s, the government’s policy on family planning was aimed at strengthening the notion of marriage, with its core values, ethics and benefits. The challenge was, among other things, to help working mothers, juggling parenting and working, while boosting the USSR’s birth rate.

A happy-go-lucky Soviet girl dreams of a career on the silver screen. 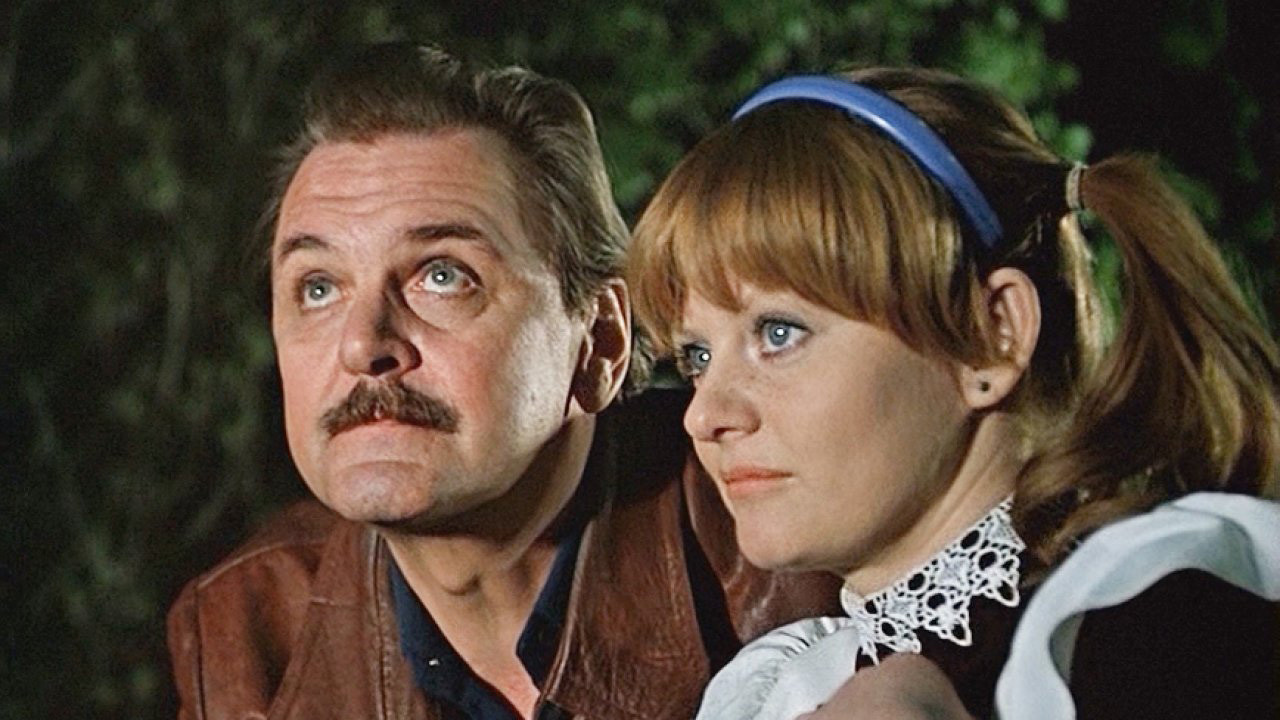 The 18-year-old aspiring star, who was brought up by her single mother, leaves her small provincial hometown for Moscow, where she is determined to try her luck as a movie actress. Nina Solomatina (brilliantly portrayed by Irina Muravyeva) will face a series of disappointments and failures before she learns the hard fact that life is not fluffy. But her turn will come and Nina will patch up ties with her remarried father (Yuri Yakovlev), will find the love of her life and will eventually make her dream come true.

A girl raised in an orphanage travels from Sverdlovsk (now Yekaterinburg) to Moscow in search of her biological mother. 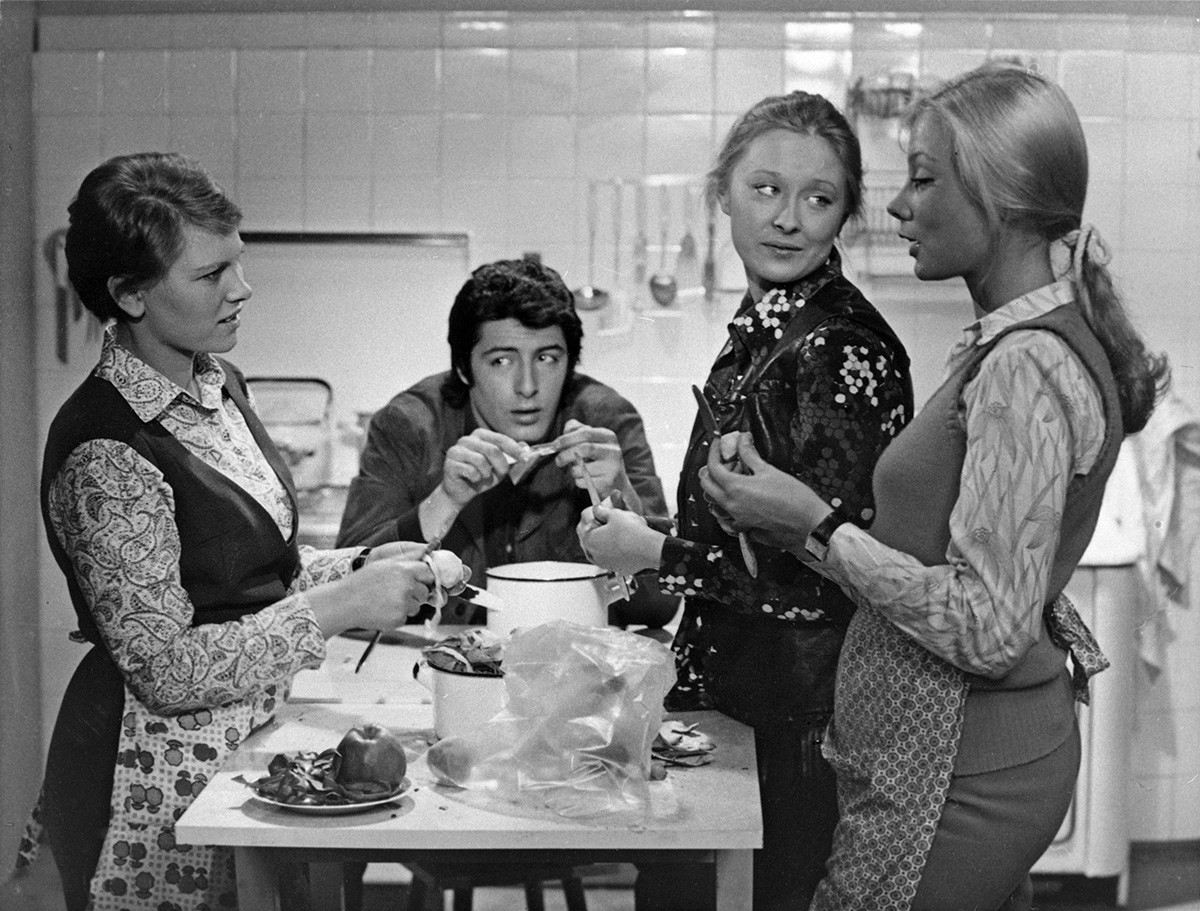 Her encounter with a family of refined intellectuals (husband, wife and their two young daughters) transforms Olga’s life in amazing and unexpected ways.  She is always right, direct, honest and naively desperate for clarity. She sees the world in black and white, good and evil and despises those who hesitate. And the family of intellectuals that she gets to know is just the opposite: they are refined, romantic and carefree. And yet, despite the odds against it, Olga will be a catalyst for a positive change in the lives of each and every member of her new “family”.

It became one of Nonna Mordyukova’s most memorable roles. 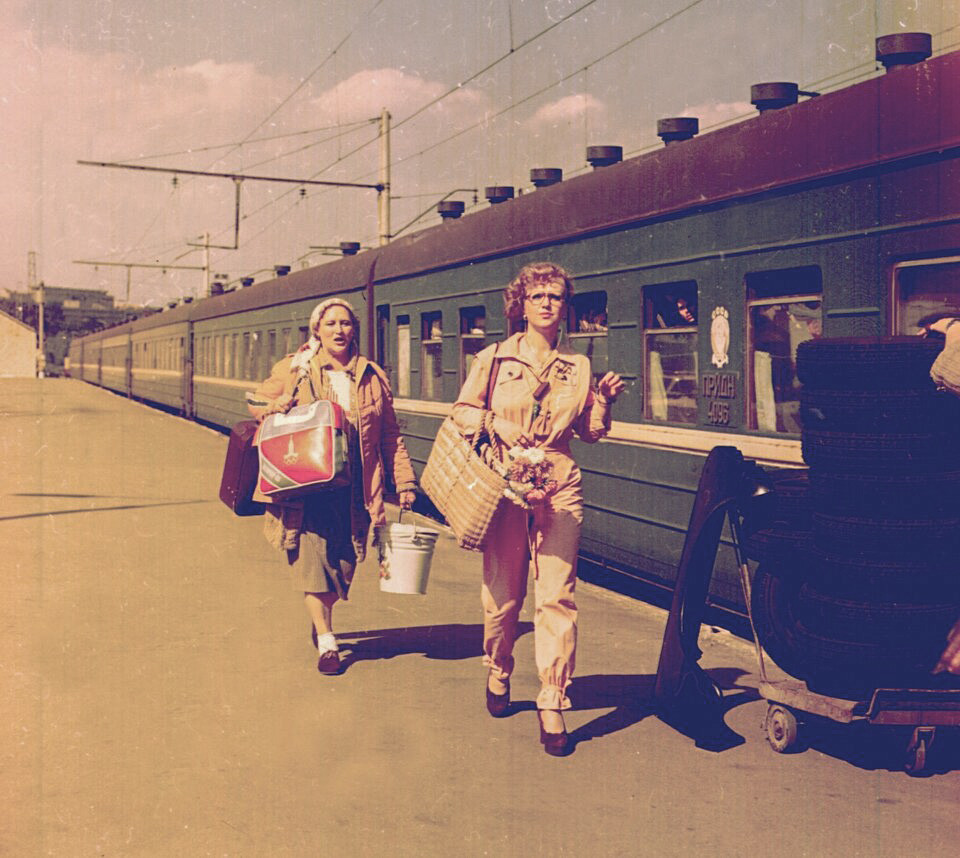 The vivacious actress played an artless country woman who comes to Moscow to visit her only daughter and granddaughter. All she wants is to mend her daughter’s broken family unit. But, the road to hell is always paved with good intentions, so the woman’s interference only causes more friction. Nikita Mikhalkov’s movie is a hymn to family values without the usual cliches. The socially-conscious heartbreaking drama demonstrates that a reconciliation with the family is the surest road to harmony and happiness.

Three girls share one dorm room and are determined to make it big in the big city. Katerina, the most responsible of all, is asked to house-sit for her uncle professor in his Stalin high-rise apartment in the heart of Moscow while he and his wife have their holidays away from home. 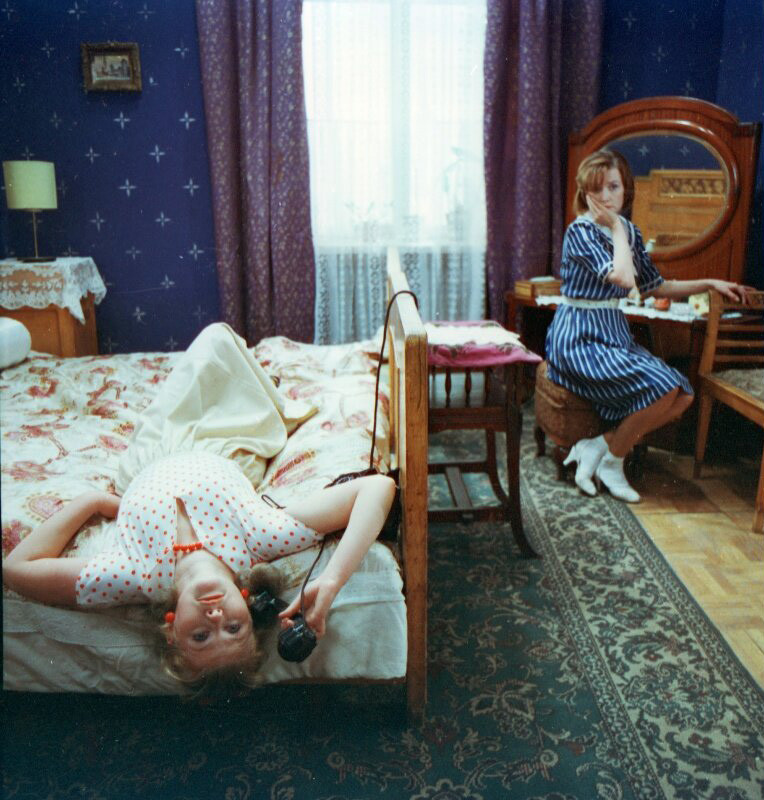 The next day the three besties throw a big party and pretend to be the professor’s daughters. Katerina (played by Vera Alentova) meets a handsome and modest cameraman and soon finds herself pregnant. The minute Rudik finds out that she is not a professor’s daughter but works at a factory, he dumps her. “There are already four of us in two rooms and now you want to move in, you and your child,” the man’s toxic mother complains, personally telling Katerina to back off. Despite everything, she gives birth to a daughter, becomes a factory head and finally meets the love of her life. ‘Moscow Does Not Believe in Tears’ proved to be a very likable movie and scooped the Academy Award for Best Foreign Picture in 1981.

Artistic and overflowing with witty dialogue, this sparkling comedy is nothing less than an encyclopedia of Soviet life! The movie is set in the 1950s in Moscow. The main action unfolds in the most ordinary communal Soviet apartment, which nonetheless boasts creative, eccentric and extraordinary inhabitants, each of whom deserves special mention. 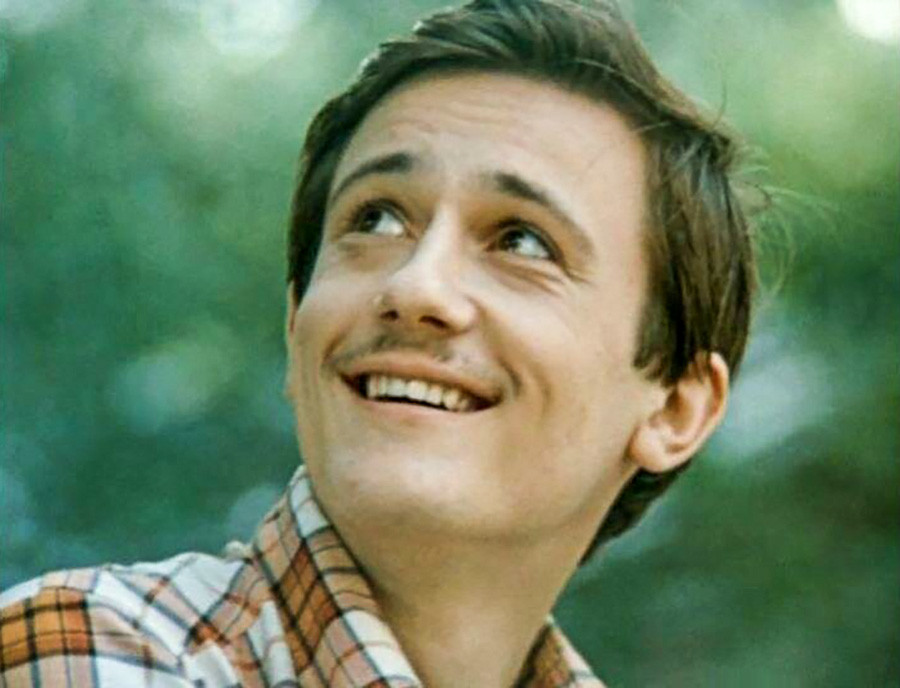 The movie focuses on the charming young womanizer Kostik (played by Oleg Menshikov), who shares the apartment with his aunt and soon finds himself thrust into a madcap adventure. Kozakov’s brilliantly-filmed comedy is full of wise insights into family relations, with former husbands forced to share the space with former wives, neighbors, friends and new significant others. A must-see! Watch it with English subtitles here.

With the arrival of their first child, young newlyweds Lida (Marina Dyuzheva) and Igor (Evgeny Steblov) count on the support of Igor’s mother-in-law. 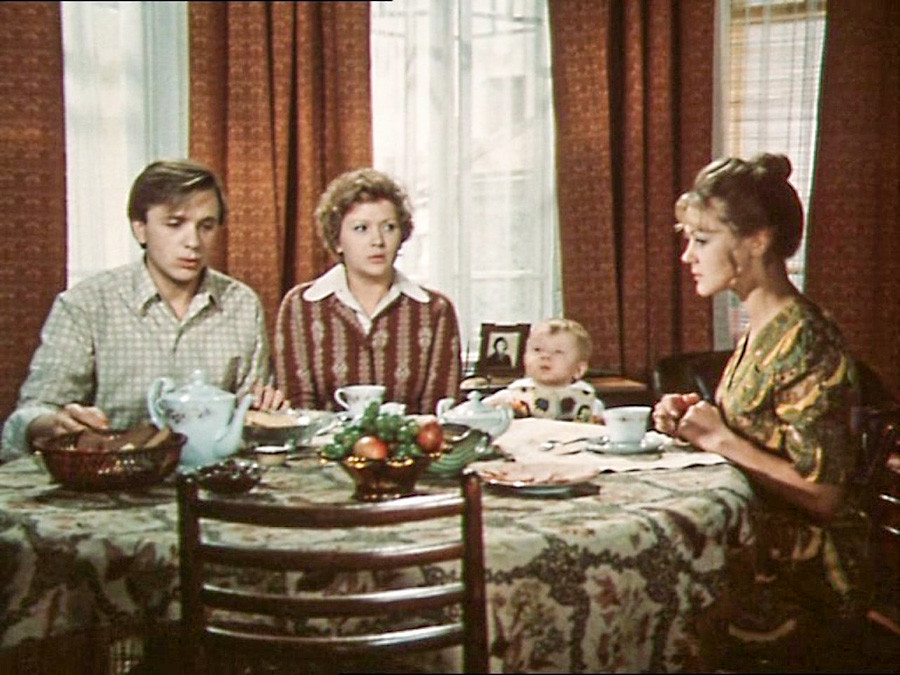 But Galina Arkadyevna (Galina Polskikh), who shares an apartment with them, is not ready to adopt the conventional role of the grandmother. Family members start looking for ways of moving into a smaller apartment to live separately. This delightful comedy hasn’t lost its relevance as a classic reminder that love does make the world go round.

The movie is about an ordinary Soviet family that goes through a storm. Everything is fine in Shura Olivantseva’s life. She’s got a beautifully-furnished new apartment, a loving and beloved husband and two children.

Just live your life and enjoy yourself. But this paradise is disturbed by little Sveta, an illegitimate daughter of Shura’s husband Pavel. Shura (stunningly portrayed by Tatiana Doronina) plays a village woman, whose tenderness, humanity and love withstands trials and tribulations.