What Russian Orthodox churches looked like across the ages (PHOTOS) 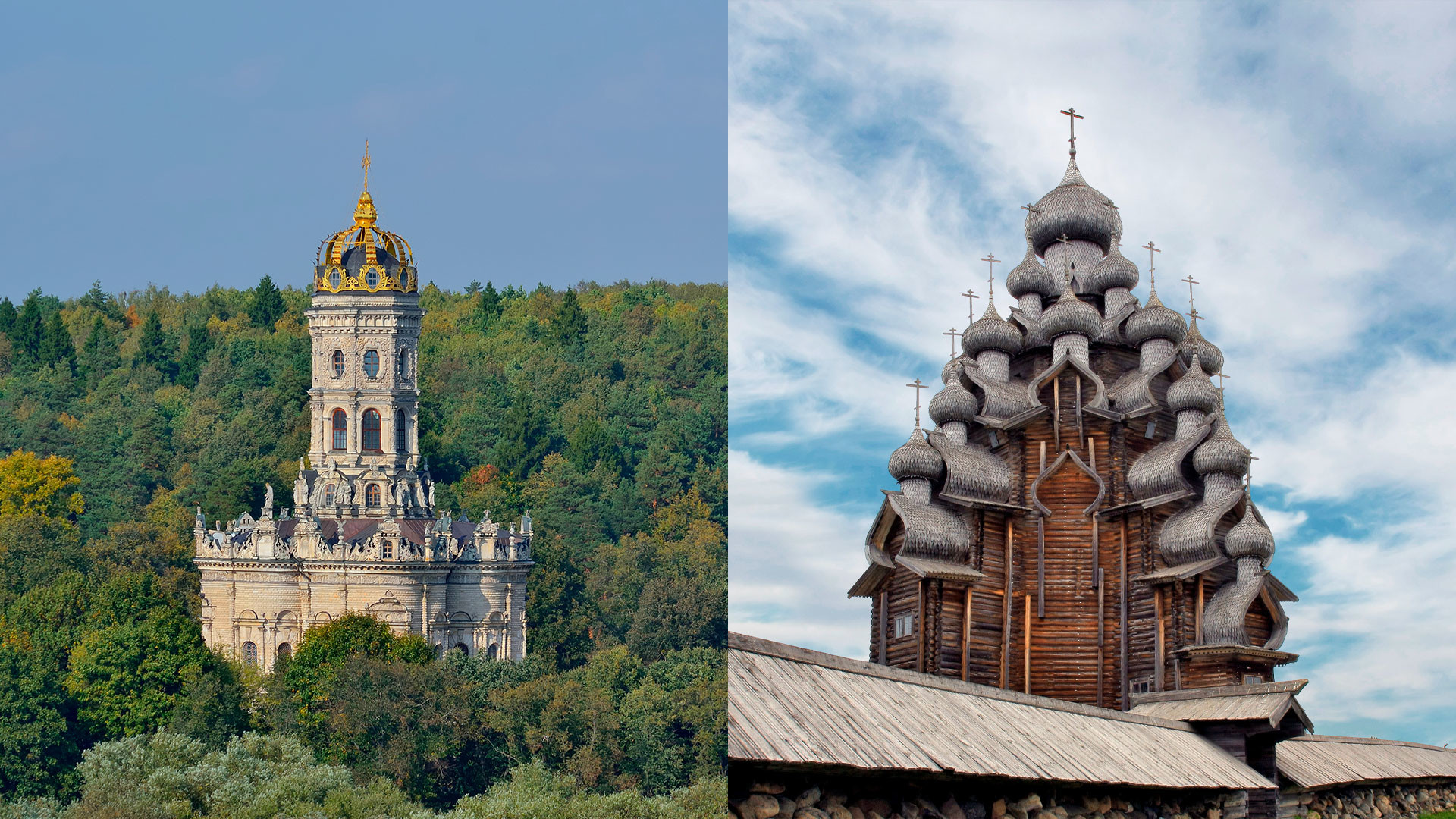 Znamenskaya Church in the Moscow Region (L); Church of the Transfiguration on the Kizhi island

Dmitry Ivanov / Wikimedia Commons; Alexander2018/Wikimedia Commons
We have traced how the architecture of Russian churches changed from ancient times to present day, in line with “fashion trends” and technological progress.

Historically, church architecture always developed faster than any other type of architecture. In many cities, churches were the first stone buildings at a time when other buildings were still being built from wood. It is, therefore, not surprising that of many ancient buildings it is churches that have survived to this day. Visiting them, you can travel back in time and retrace the history of Russia.

There are several Orthodox churches on the territory of modern Russia that were built before the country adopted Christianity in 988. For example, the Church at Nizhny Arkhyz in Karachay-Cherkessia, in the Russian North Caucasus, a real archaeological monument of the ancient Alanian state. This church was built in the early 10th century from sandstone, which is a very unusual construction material for central Russia. 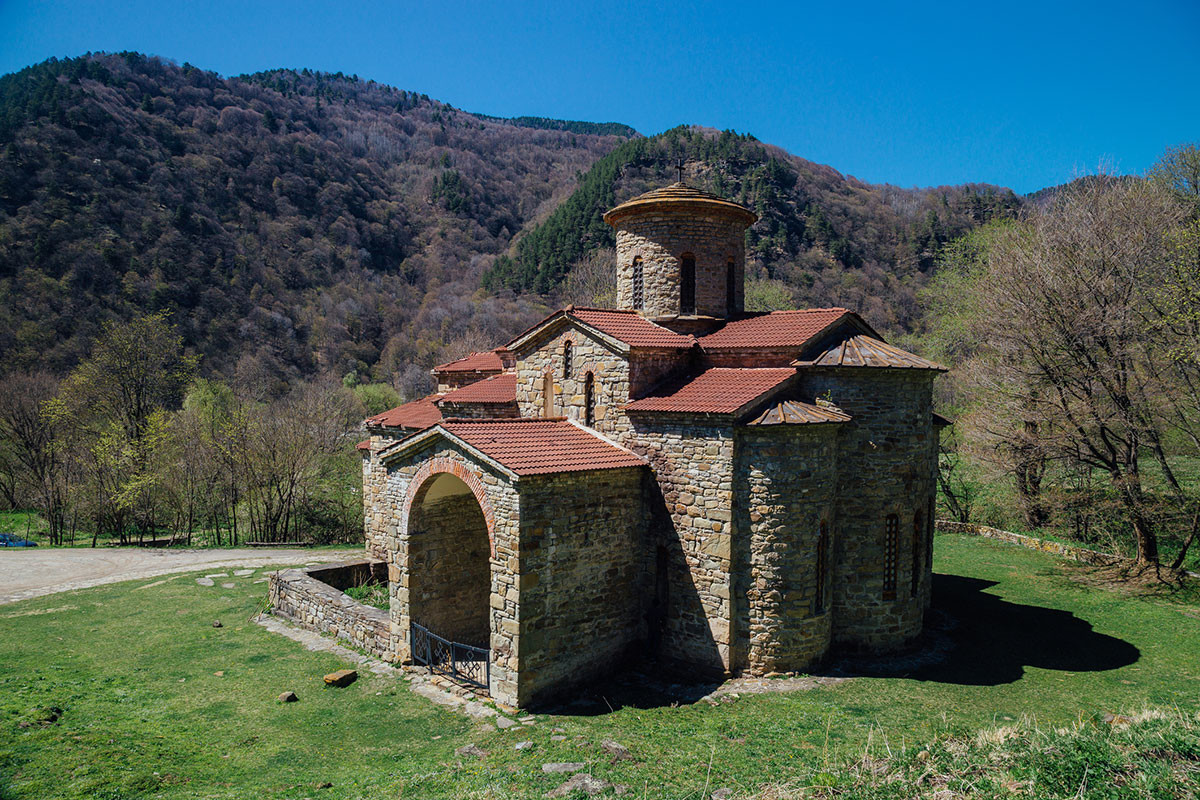 Another site dating back to the pre-Christian era is the Church of St. John the Baptist in Kerch, which is now considered the oldest city in Russia. This basilica was built in the 10th century, when Crimea was governed by the Byzantine Empire. 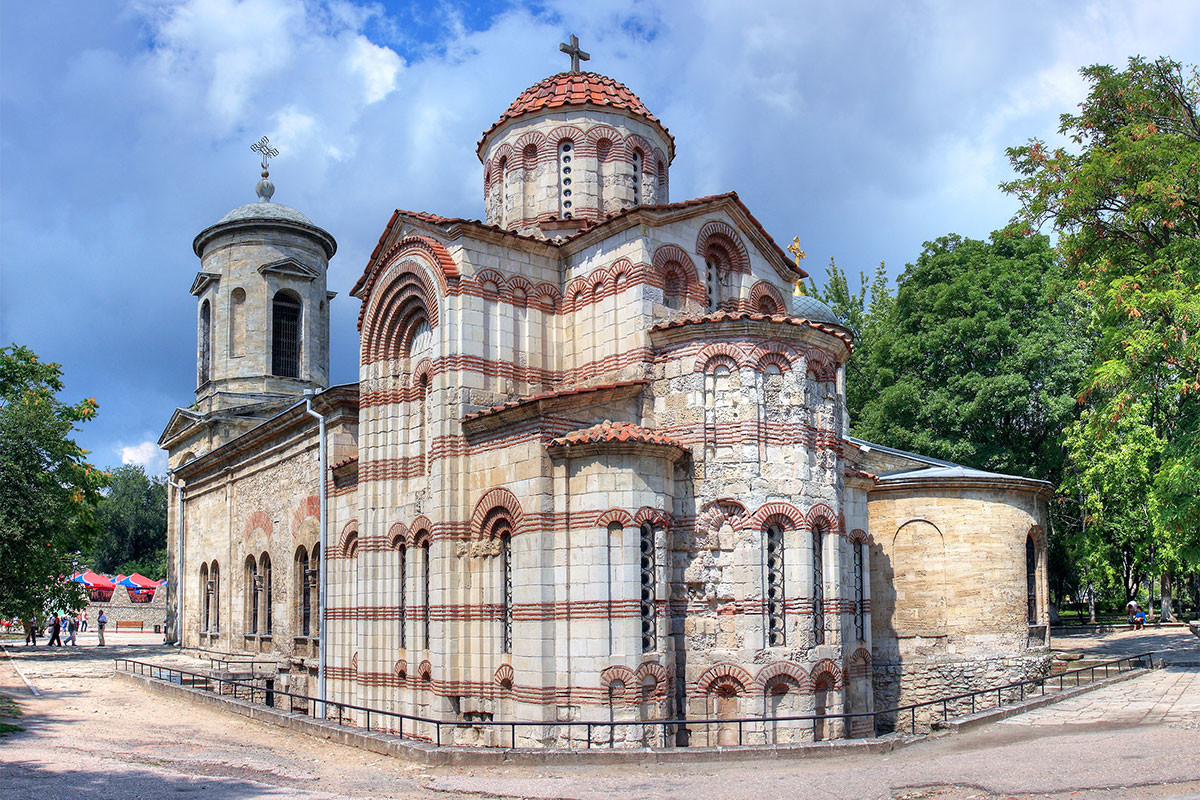 The Church of St. John the Baptist in Kerch, Crimea

Medieval Russia suffered greatly from the Tatar-Mongol invasion, with invaders burning down and destroying churches and collecting tribute from Russian principalities for two centuries. Few “pre-Mongol” churches of the 11th-15th centuries have survived, while those that have are mostly in areas that the Tatar-Mongols did not reach. Many of them were built according to Byzantine models, as cross-in-square churches, whose internal structure was shaped like a cross, topped by a dome.

One of the oldest churches of Ancient Rus’ is the Cathedral of St. Sophia in Veliky Novgorod, which was built in 1045-1050. 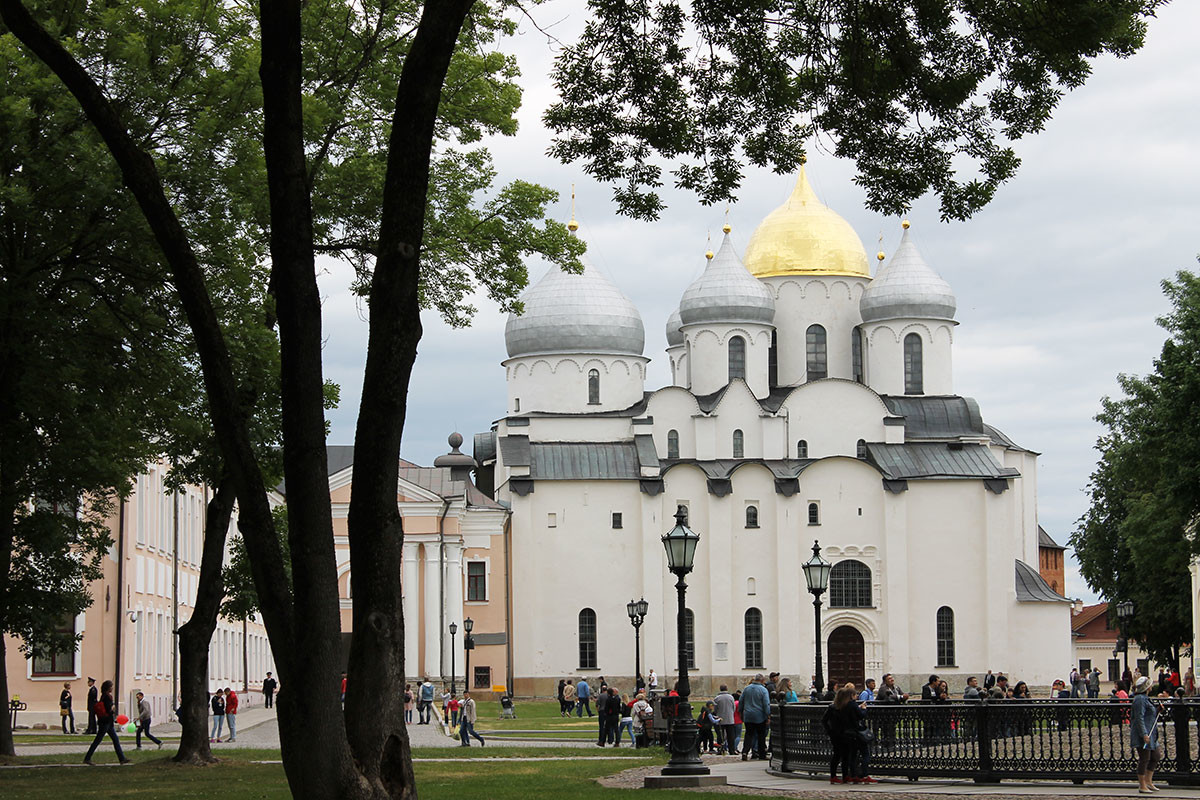 The Cathedral of St. Sophia in Veliky Novgorod

Incidentally, the tradition of painting church walls white appeared later, whereas, in ancient times, churches looked more like the Peter and Paul Church in Smolensk, which was built in 1146. 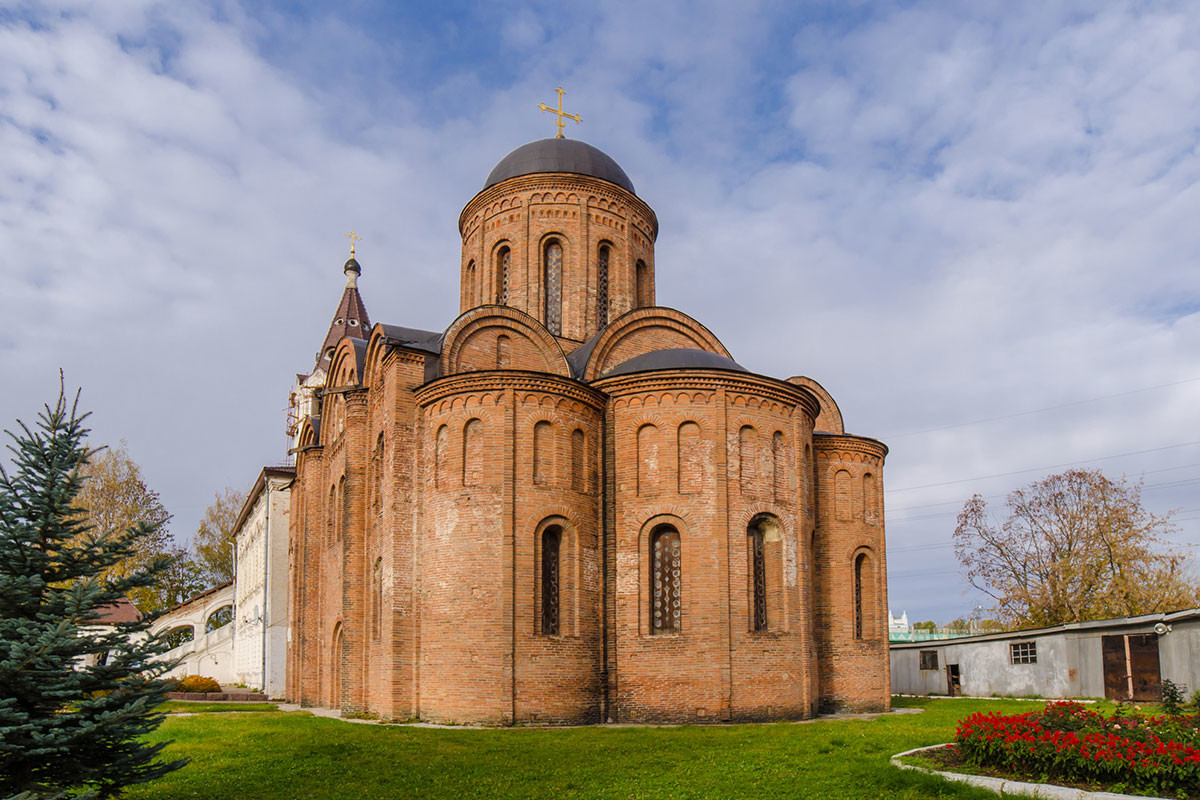 The Peter and Paul Church in Smolensk

Tatar-Mongol invaders did not reach Pskov, so several of the local churches dating back to the 12-13th centuries have survived to our day and are now listed as UNESCO World Heritage sites. For example, the Cathedral of John the Baptist, built in 1240. One distinctive feature of the Pskov school of architecture is that local churches are squat and have very few exterior decorations. 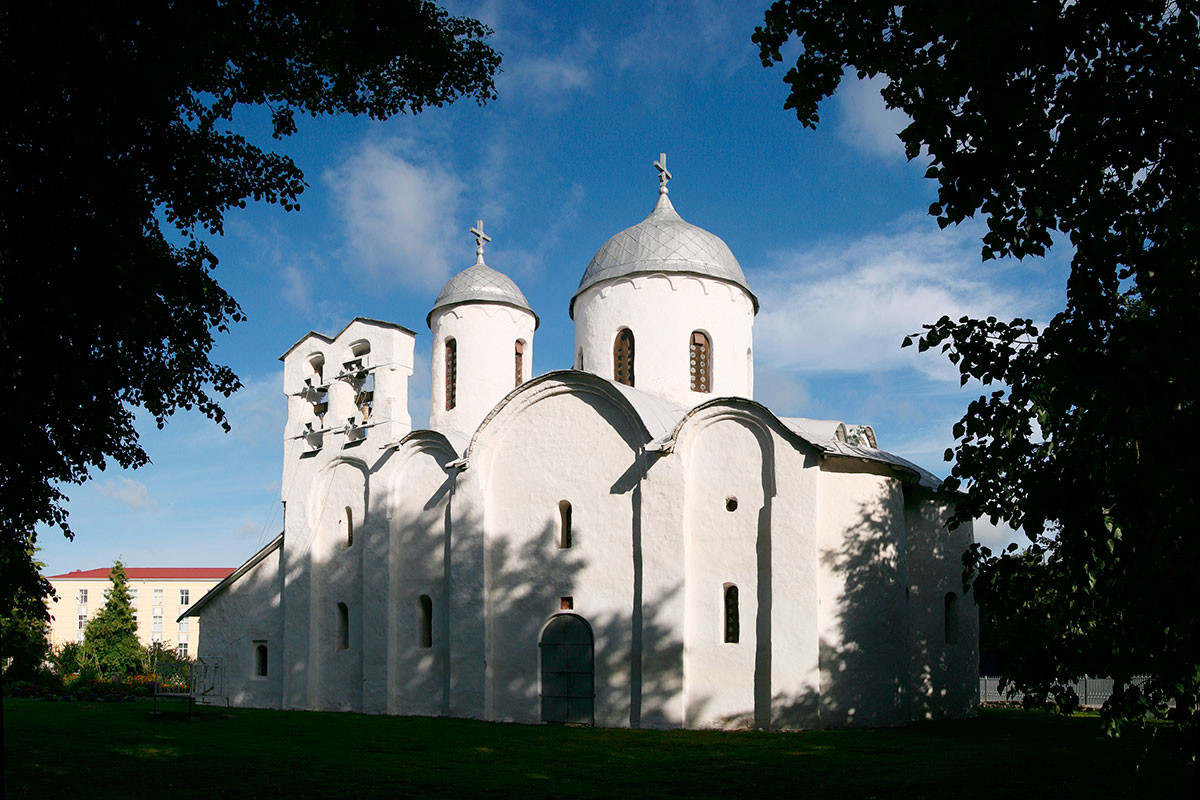 The Cathedral of John the Baptist in Pskov

Until the 15th century, Russia lived through feudal fragmentation, with its regions developing as separate principalities. One of the strongest and most influential of them was the Vladimir-Suzdal Principality, which later brought together the whole of North-Eastern Russia. One of the oldest churches of that principality is the traditional cross-domed Transfiguration Cathedral in Pereslavl-Zalessky, built in 1152. 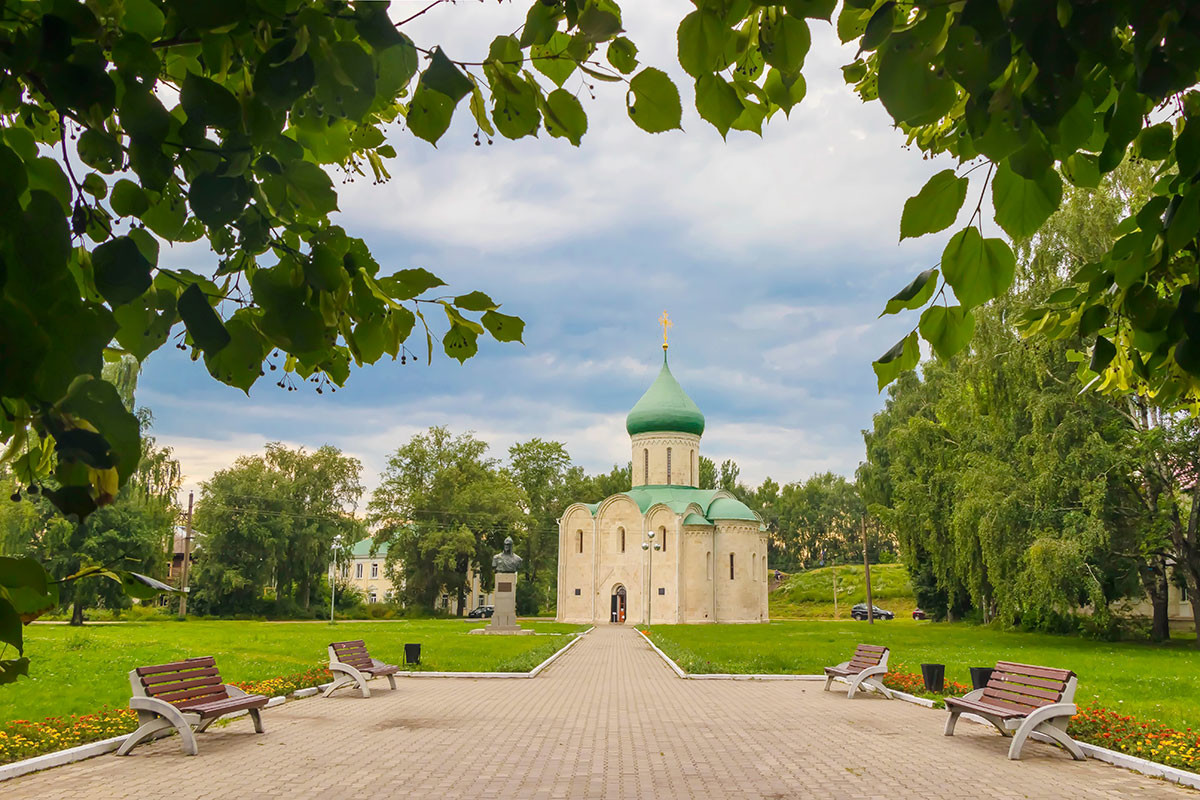 The Transfiguration Cathedral in Pereslavl-Zalessky

The Assumption Cathedral in Vladimir, which was built in 1158, represents a far more complex architectural form and has a richly decorated interior: it is painted with frescoes by the legendary Andrei Rublev. It was set on fire and plundered several times during the Tatar-Mongol invasion. Nevertheless, the overall look of the cathedral has been preserved. 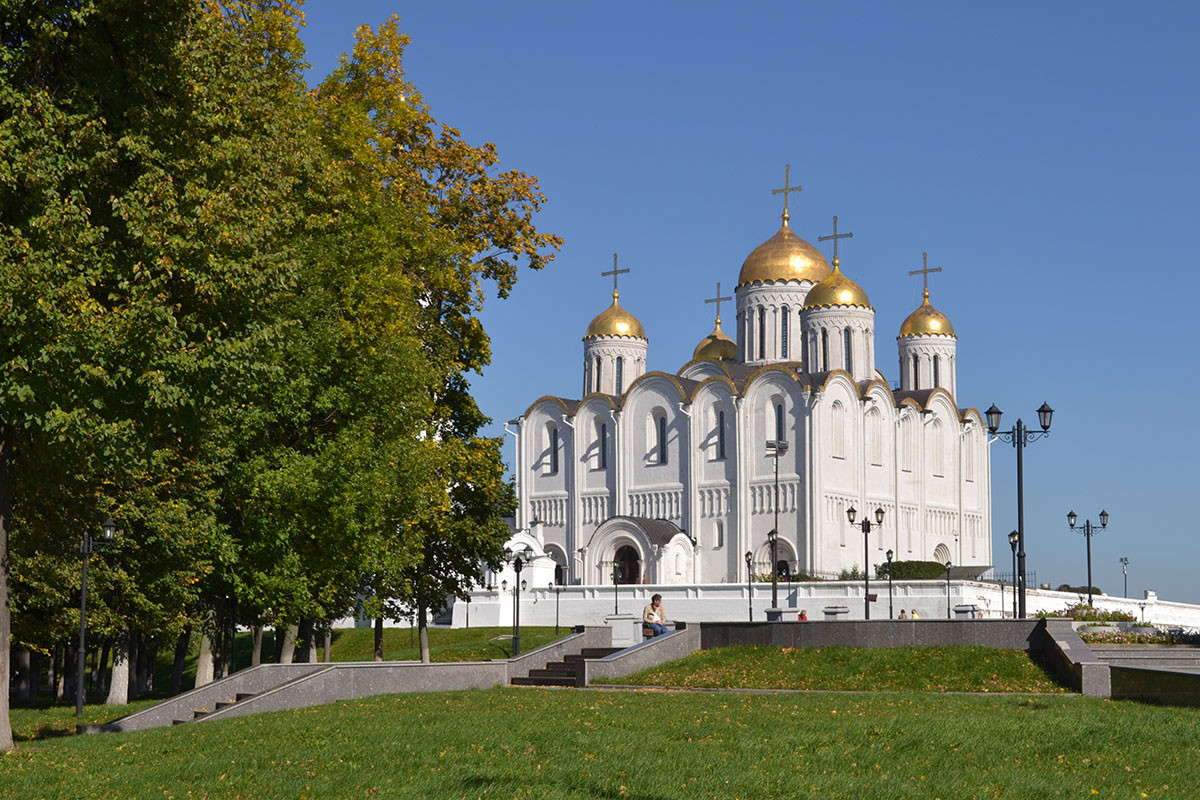 The Assumption Cathedral in Vladimir

The oldest surviving church in Moscow is the Savior Cathedral of the Andronikov Monastery, built in 1420-1425, with exterior decorative elements typical of Moscow architecture - gables and kokoshniks. 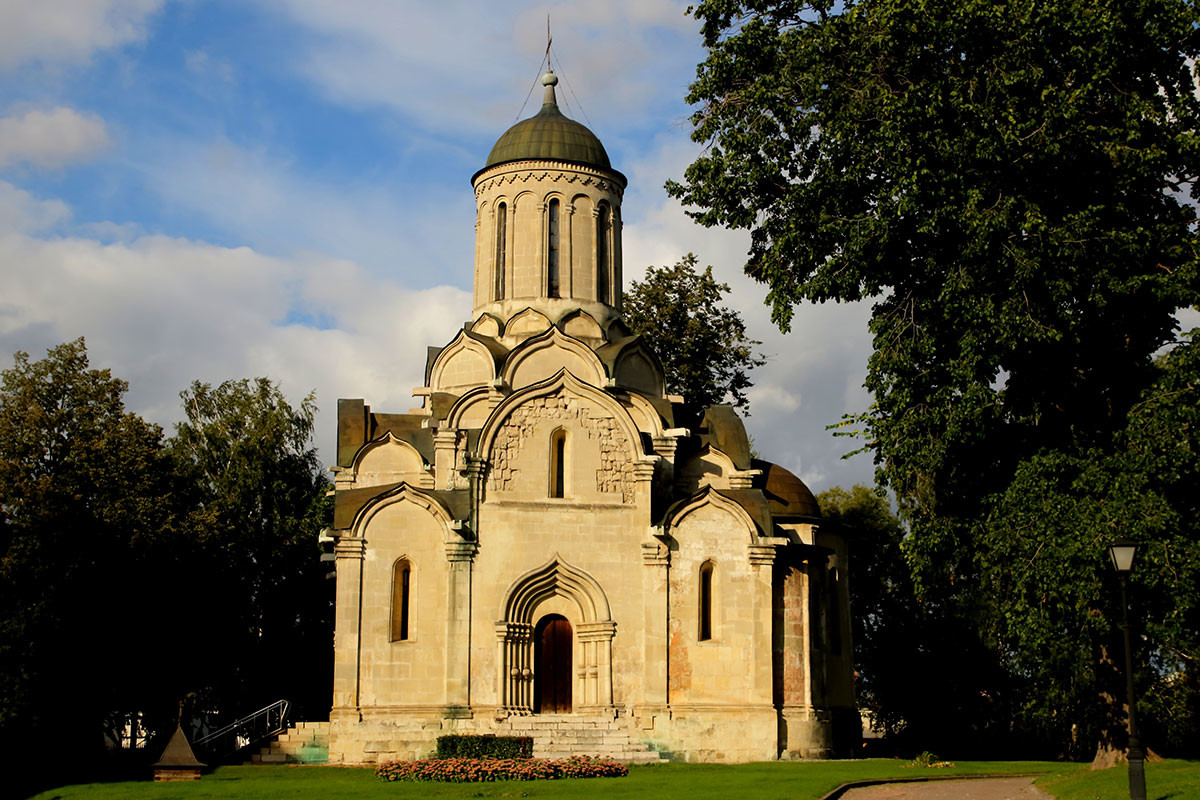 The Savior Cathedral of the Andronikov Monastery

Unified Russia and the Tsardom of Russia

At the end of the 15th century, fragmented Russian principalities finally joined their forces and got rid of the Tatar-Mongol yoke. The “gatherer of the Russian lands” was Ivan III, who became the first ruler of the Russian state with its capital in Moscow. Under his rule, in 1475-1479, Italian architect Aristotele Fioravanti built the Assumption Cathedral of the Moscow Kremlin and the construction of a stone Kremlin to replace the wooden one began. 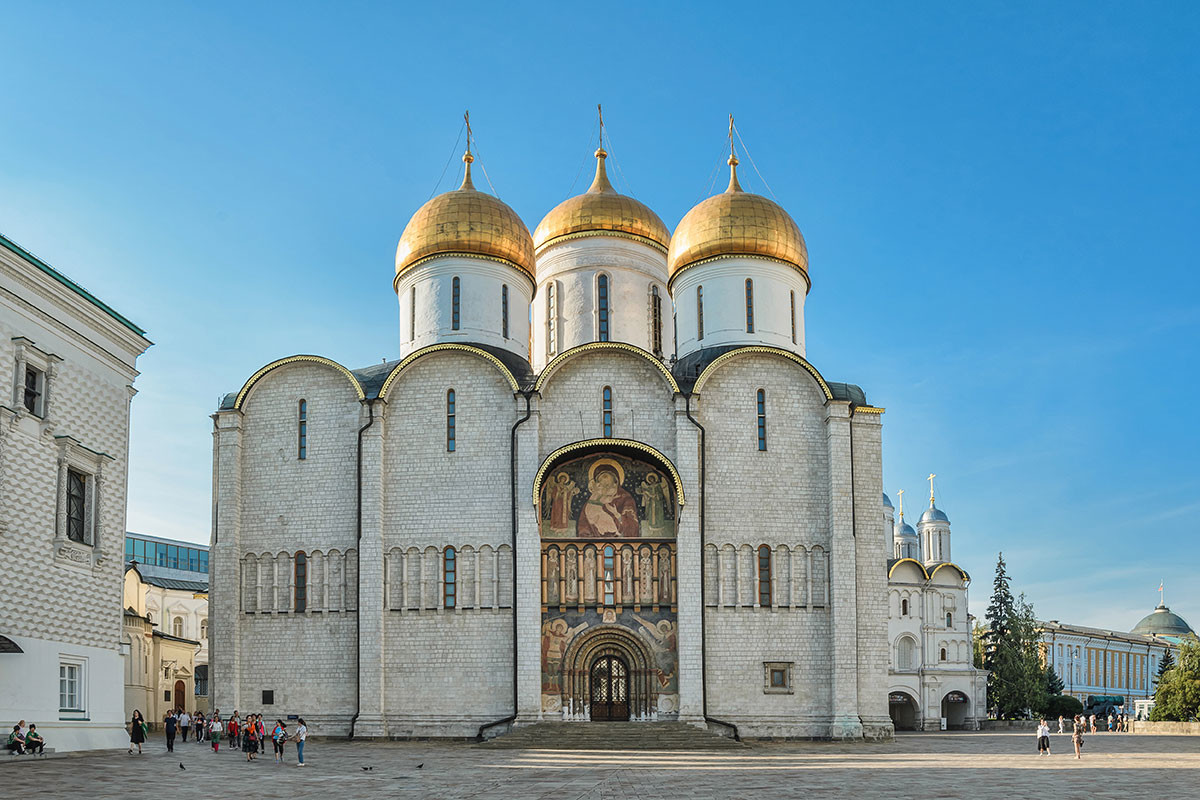 The Assumption Cathedral of the Moscow Kremlin

In 1508, another Italian, Aloisio the New, built the Cathedral of the Archangel in the Moscow Kremlin, in which he used a much bolder decor with obvious Italian architectural influences. 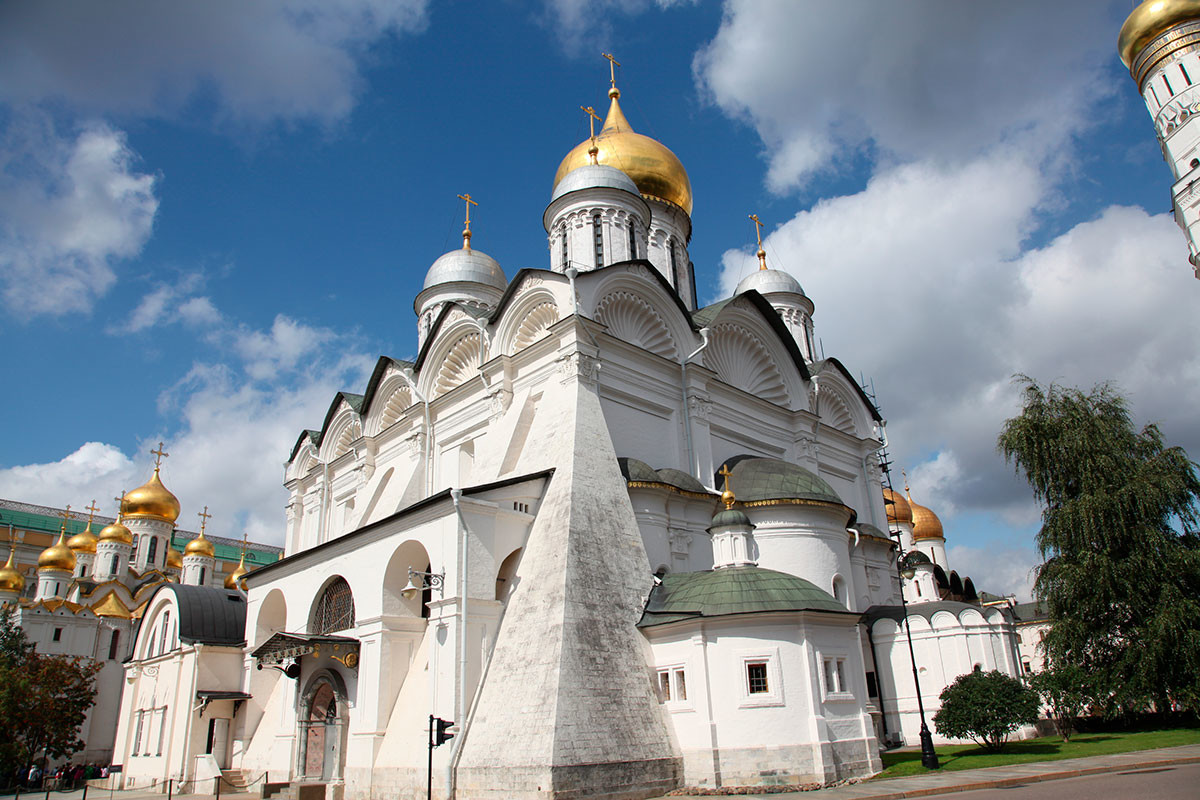 The Cathedral of the Archangel in the Moscow Kremlin

Church architecture continued to transform. One of the new “fashionable” elements of 16th century church architecture was the tented roof. The first stone church to have it - the Church of the Ascension in Kolomenskoye - was built in 1532. 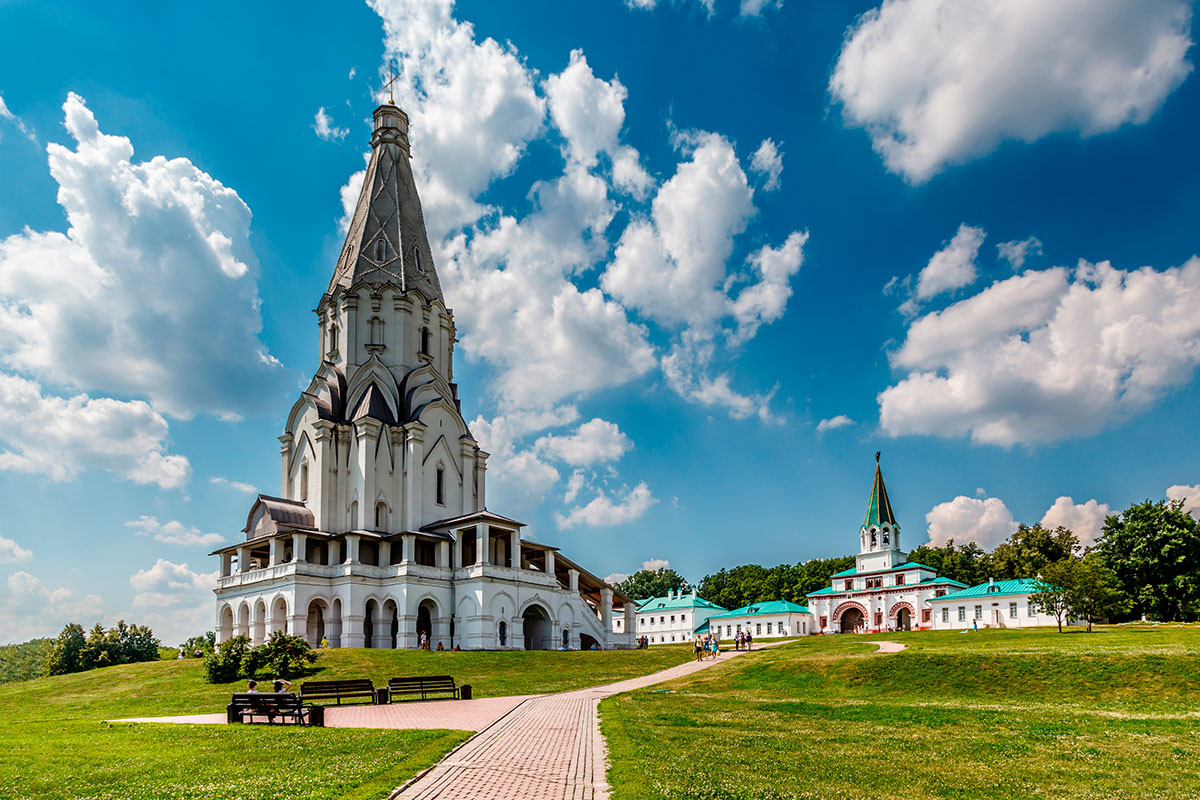 The Church of the Ascension in Kolomenskoye

When Ivan the Terrible came to power, he declared himself tsar and made Russia a tsardom. Perhaps the best known architectural legacy of his reign is the Cathedral of St. Basil the Blessed (Pokrovsky Cathedral) on the Red Square in Moscow, commemorating the conquest of Kazan. 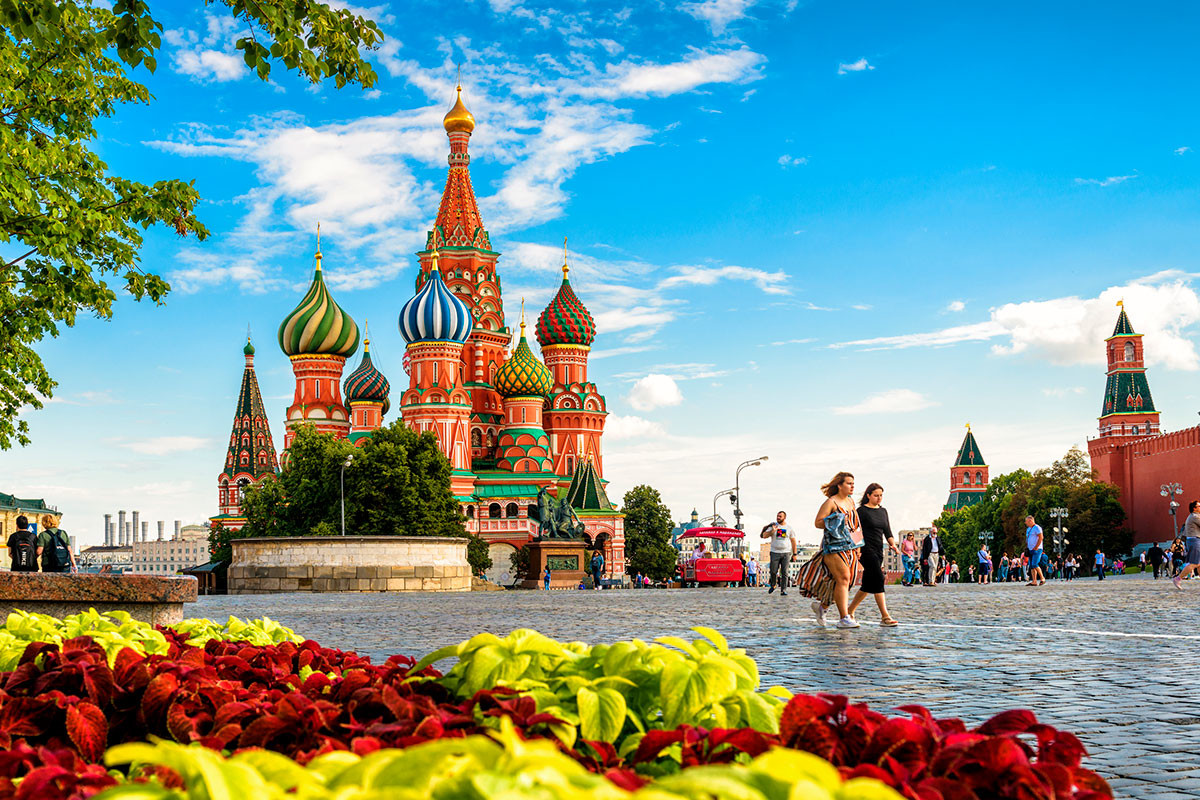 Churches continued to be built in the “old” style, but more and more of them were designed with a high porch. The Smolensky Cathedral of the Novodevichy Convent in Moscow dates back to the mid-16th century. 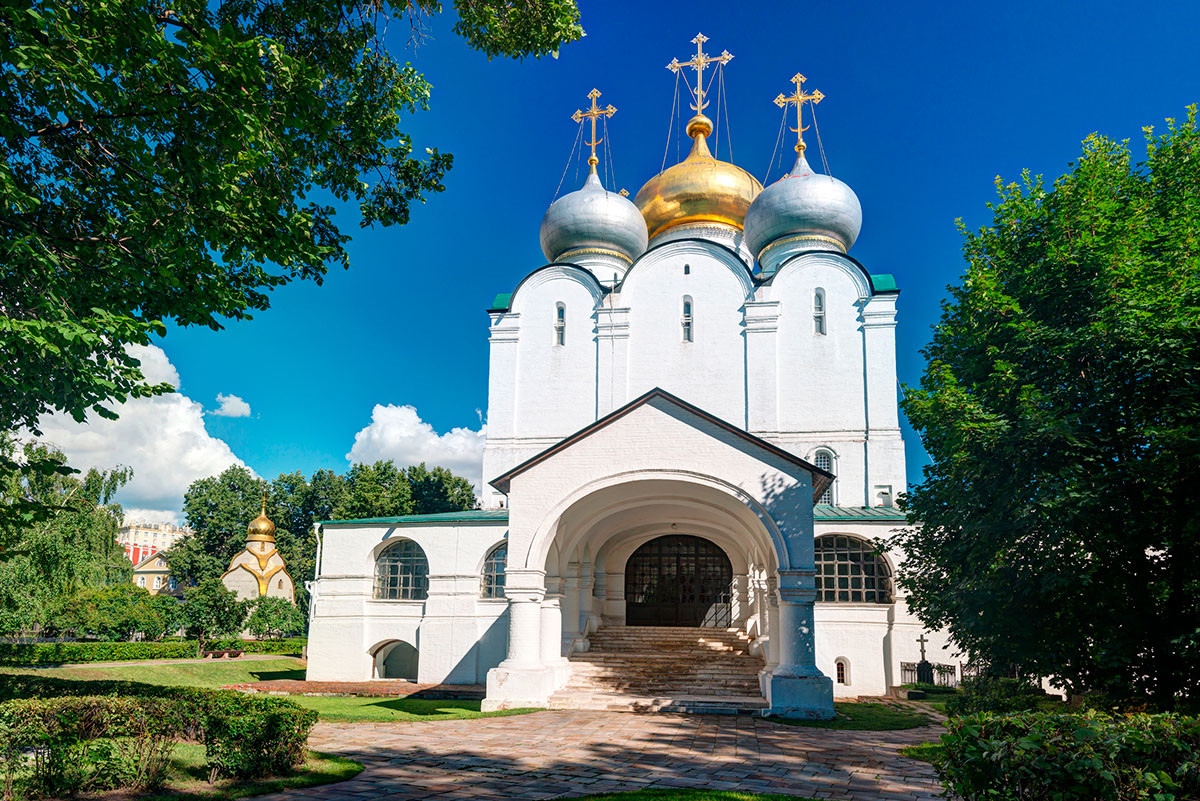 The Smolensky Cathedral of the Novodevichy Convent, Moscow

And in 1559-1585, a new and richly decorated church was built at the main holy site - the Assumption Cathedral in the Trinity Lavra of St. Sergius. 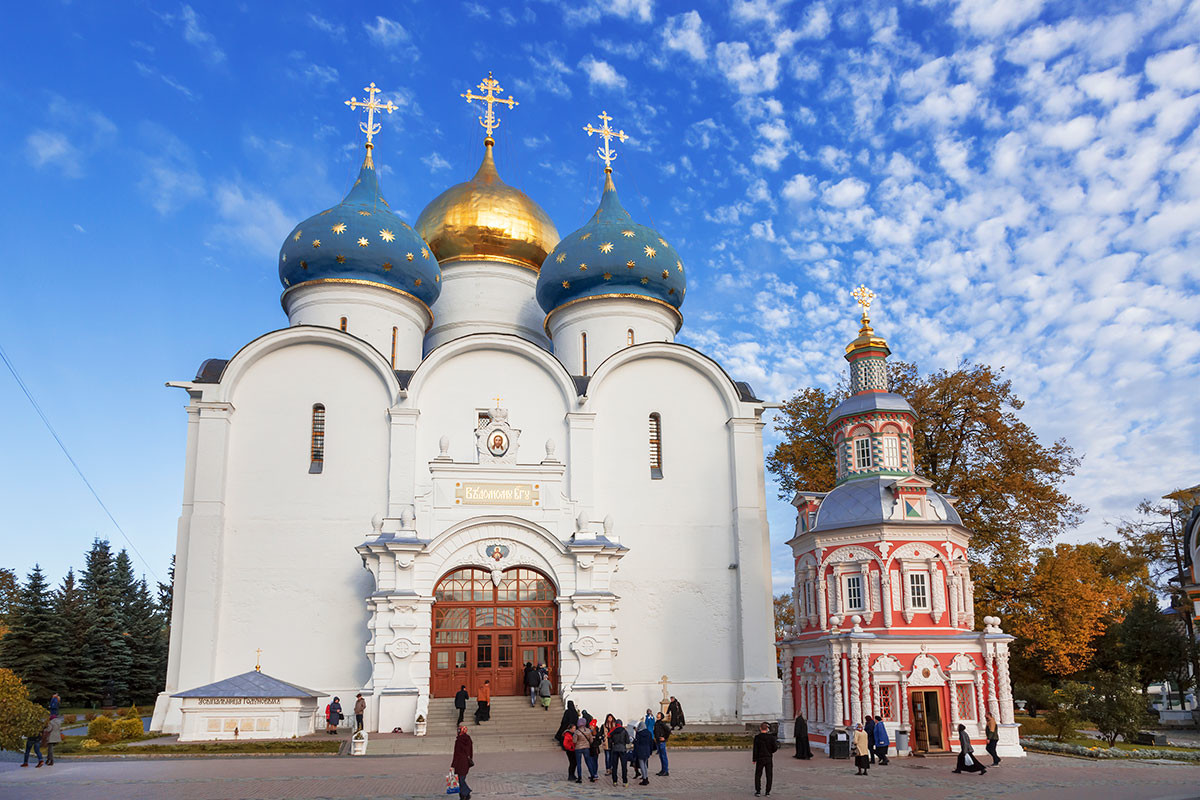 The Assumption Cathedral in the Trinity Lavra of St. Sergius

The Romanov era: Fretwork and Baroque

At the beginning of the 17th century, Russia was plunged into the Time of Troubles, marked by anarchy and a Polish intervention. And yet, already by the middle of that century, a new architectural style emerged - Russian Fretwork. The elegant Trinity Church in Nikitniki in Moscow, which was built in 1628-1651, can be considered a classic example of that style. 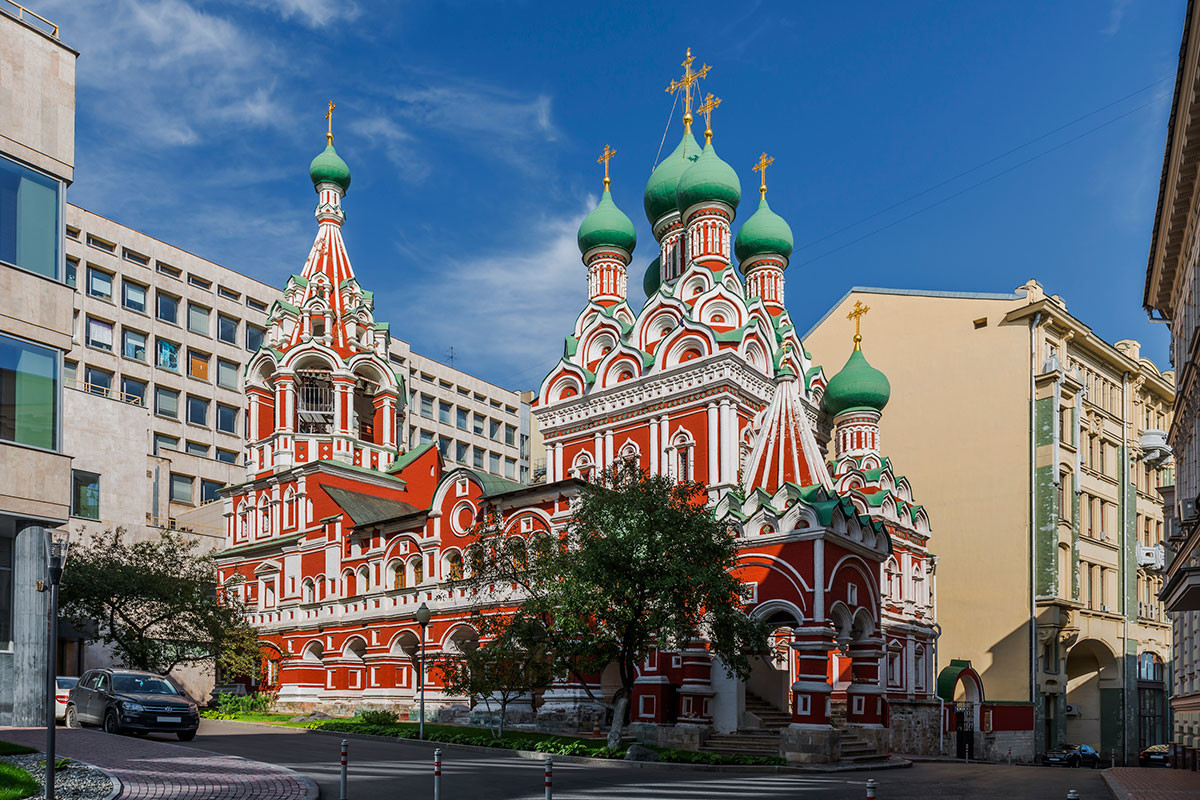 the Trinity Church in Nikitniki, Moscow

The Russian Fretwork style is characterized by an abundance of décor turning a church into a painted pattern. Other typical features of that style are: numerous small domes instead of large ones, tented roofs, kokoshniks, carved platbands and multi-colored tiles. Churches in this style were built not only in Moscow, but throughout Russia. One of the most striking examples is the Church of the (Hodegetria) Icon of the Mother of God at the Convent of St. John the Baptist in Vyazma (1630s). 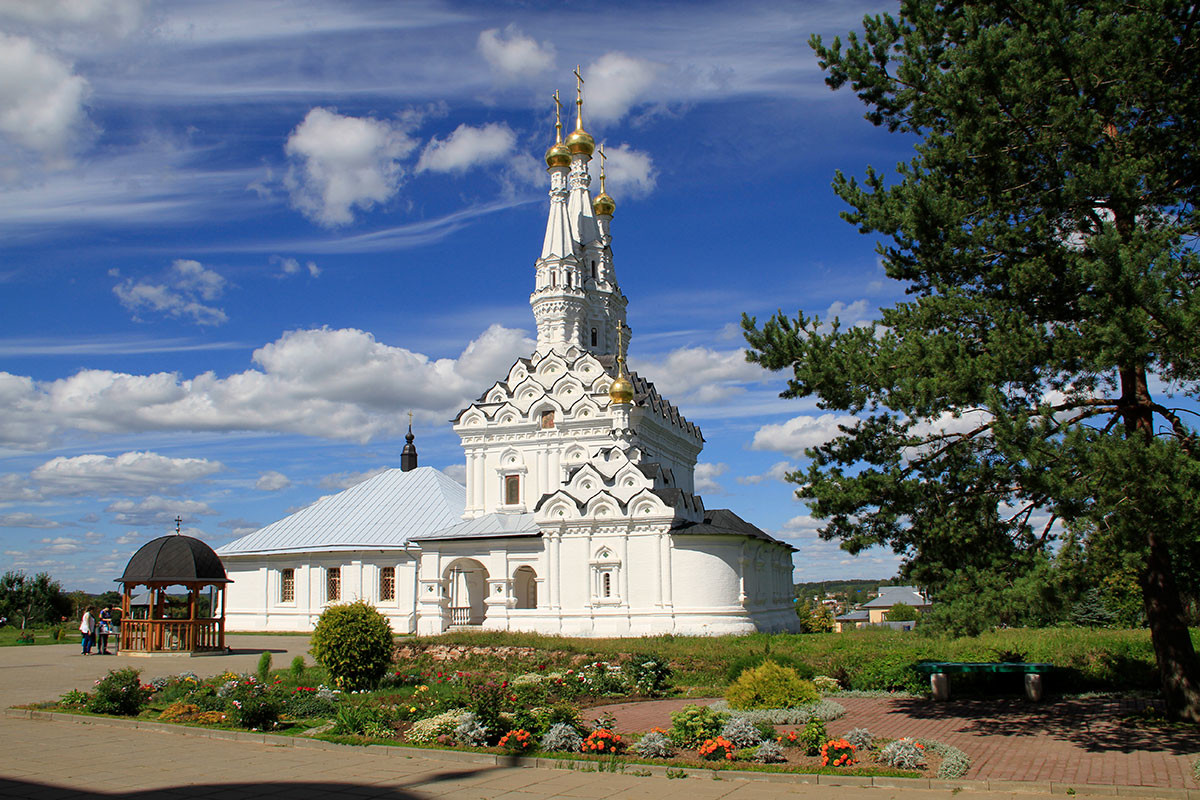 The Church of the (Hodegetria) Icon of the Mother of God in Vyazma, Moscow Region

With Peter I’s accession to the throne and a growing influence of European architecture, Russia saw the arrival of the Baroque style, with abundant stucco decoration, carvings and gilding. For example, as in the Church of the Intercession in Fili in Moscow (built in 1690-1694). 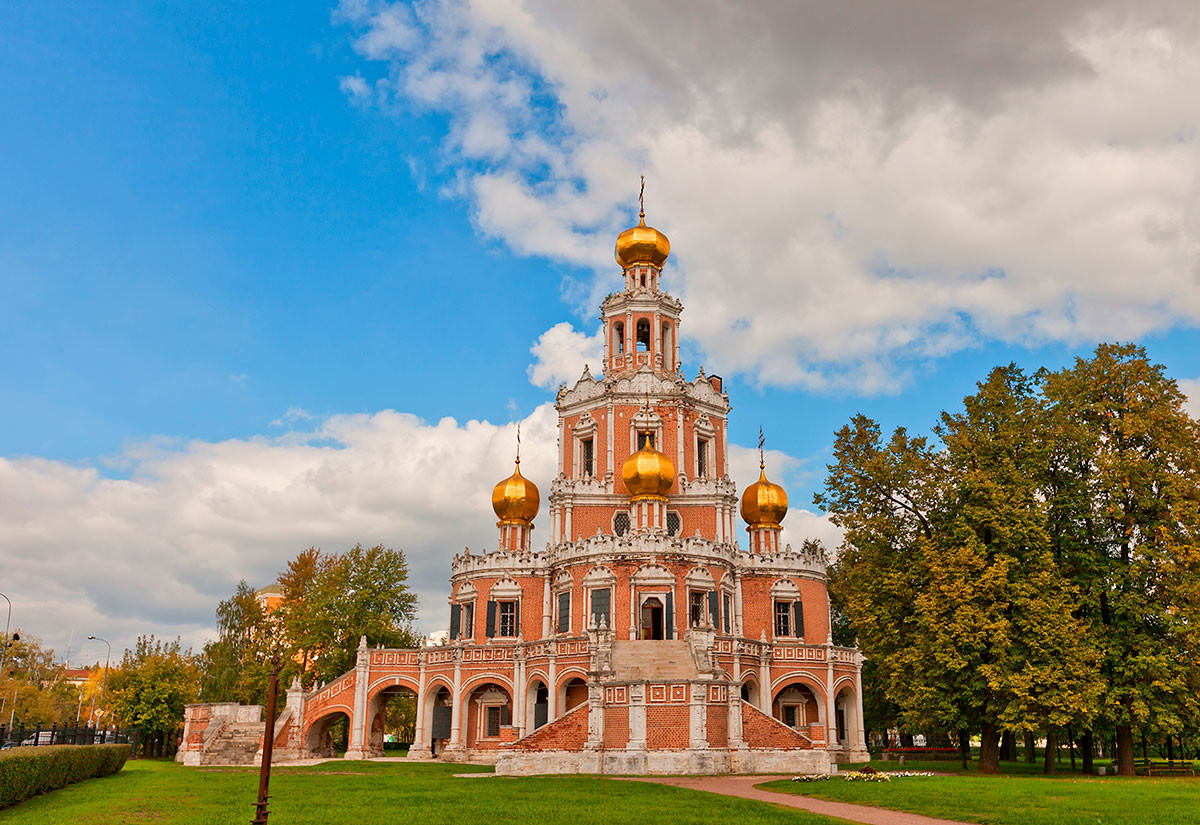 The Church of the Intercession in Fili in Moscow

Furthermore, Russian Baroque expressed itself in a variety of church forms that had not been observed before. For example, the rotundas of the Resurrection Cathedral of the New Jerusalem Monastery (late 17th century). 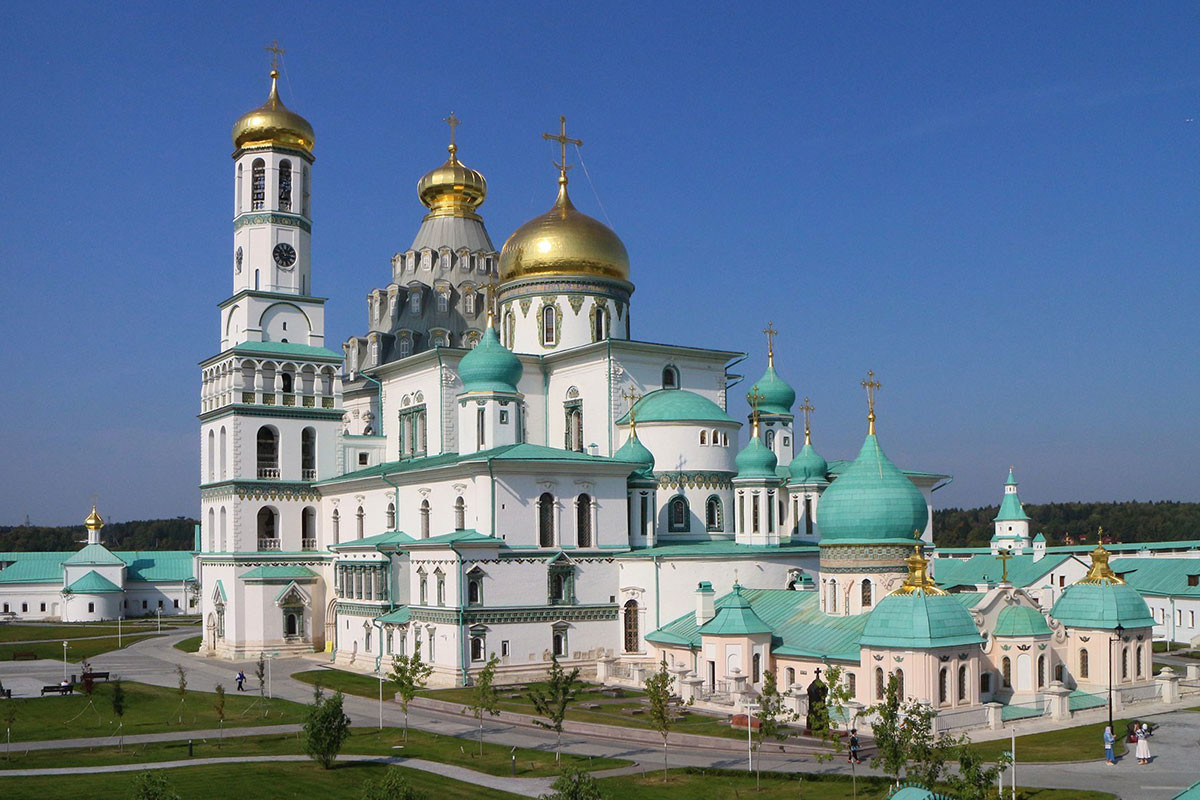 The Resurrection Cathedral of the New Jerusalem Monastery

Or the Church of the Nativity of the Virgin in Podmoklovo, built slightly later – in 1714-1722 – and thus even more “European”. 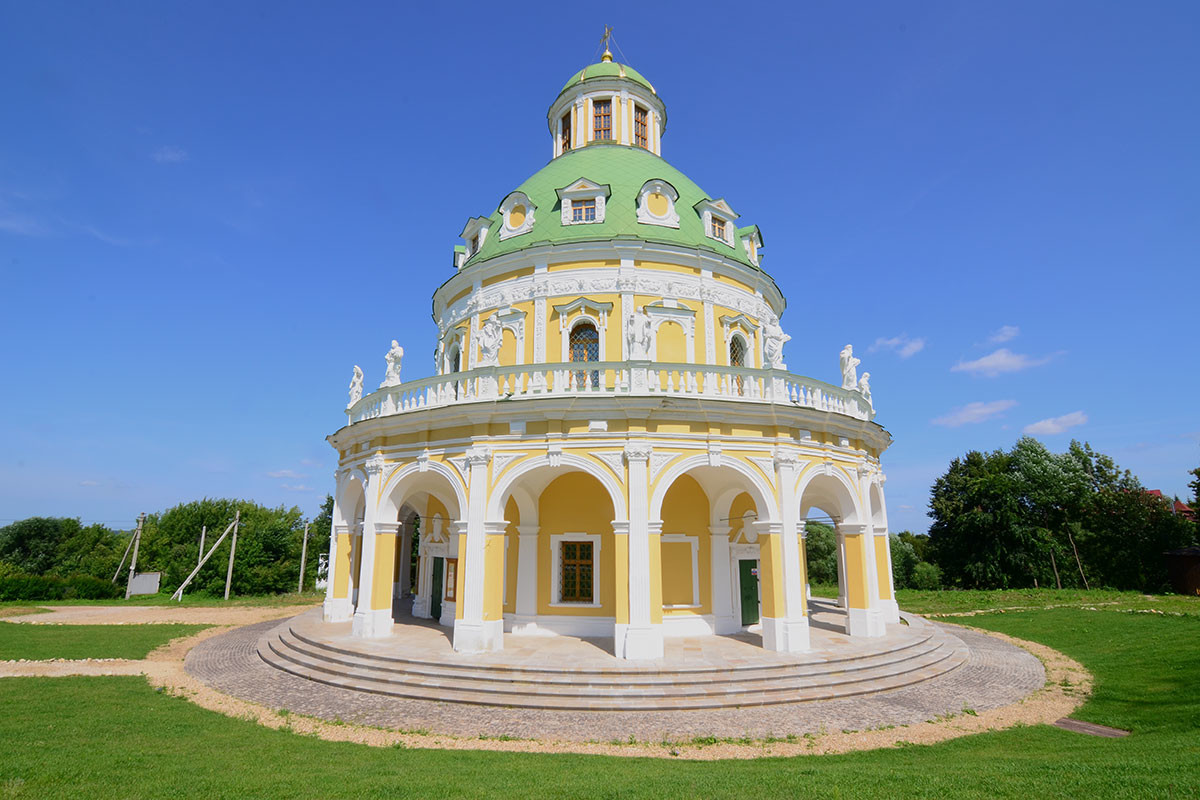 There were also some utterly unique experiments, such as the Church of the Holy Sign of the Mother of God in Dubrovitsy (1690-1704). 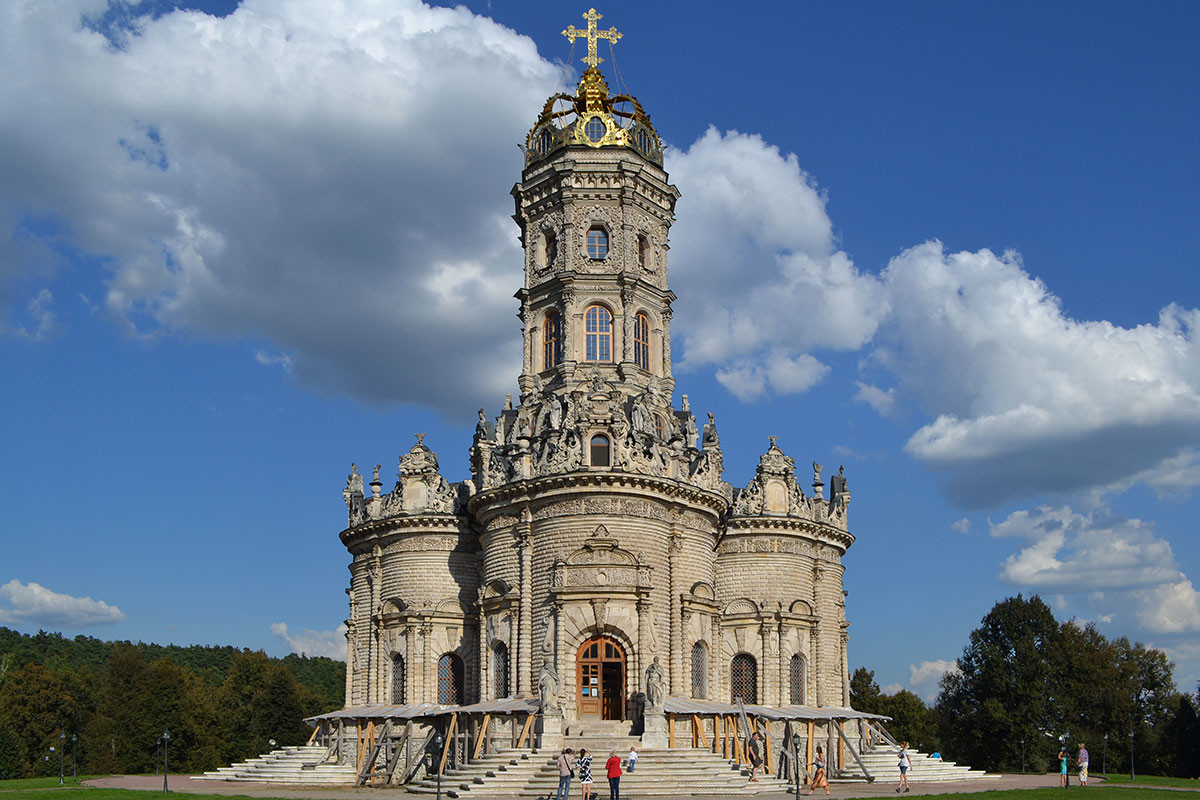 Experts identify many varieties of Russian Baroque, as each ruler or a rich benefactor had their own vision of it. Northern Russia had its own version of the baroque style, more restrained. A fine example of it is the Church of Entry into Jerusalem in Totma (1794). 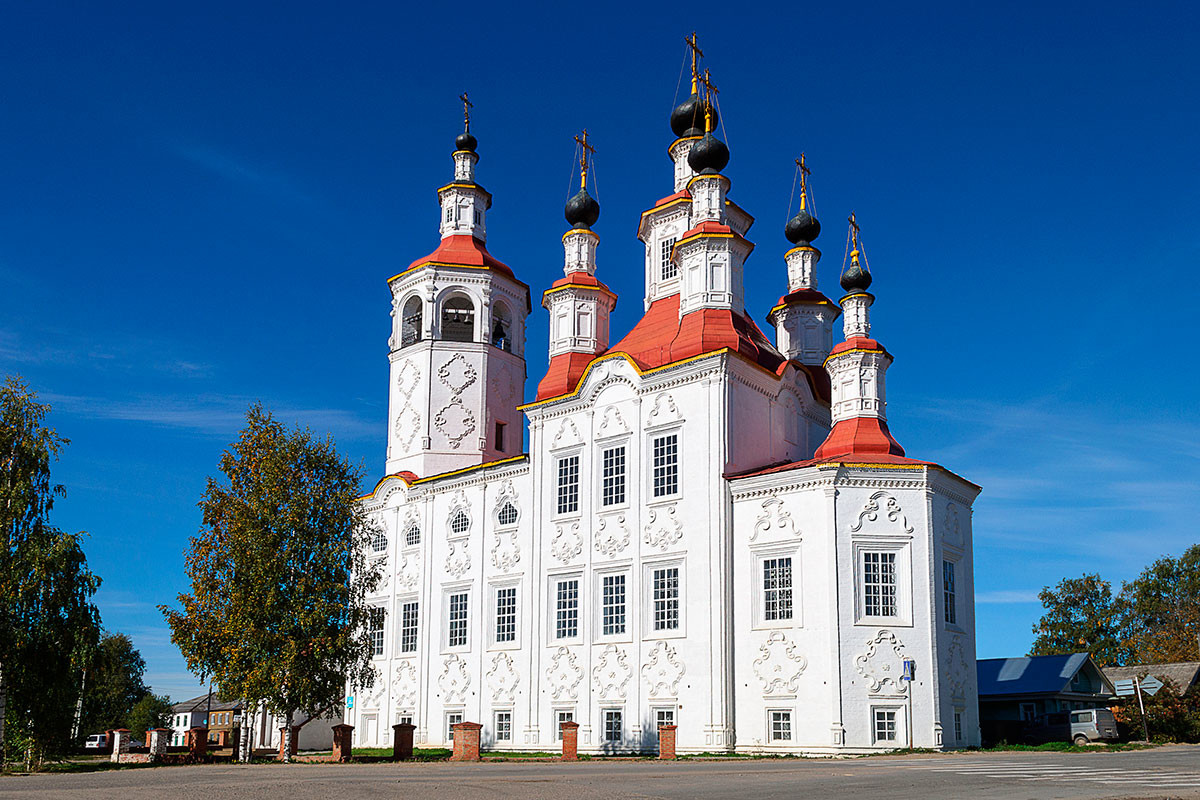 The Church of Entry into Jerusalem in Totma

In the meantime, in the remote eastern provinces, there emerged the so-called Siberian Baroque, shaped – among other things - by Asian influences. A striking example of it is the Church of the Exaltation of the Precious and Life-Giving Cross in Irkutsk (1747) with its “flaming” cornices (click here to find out more about Siberian Baroque). 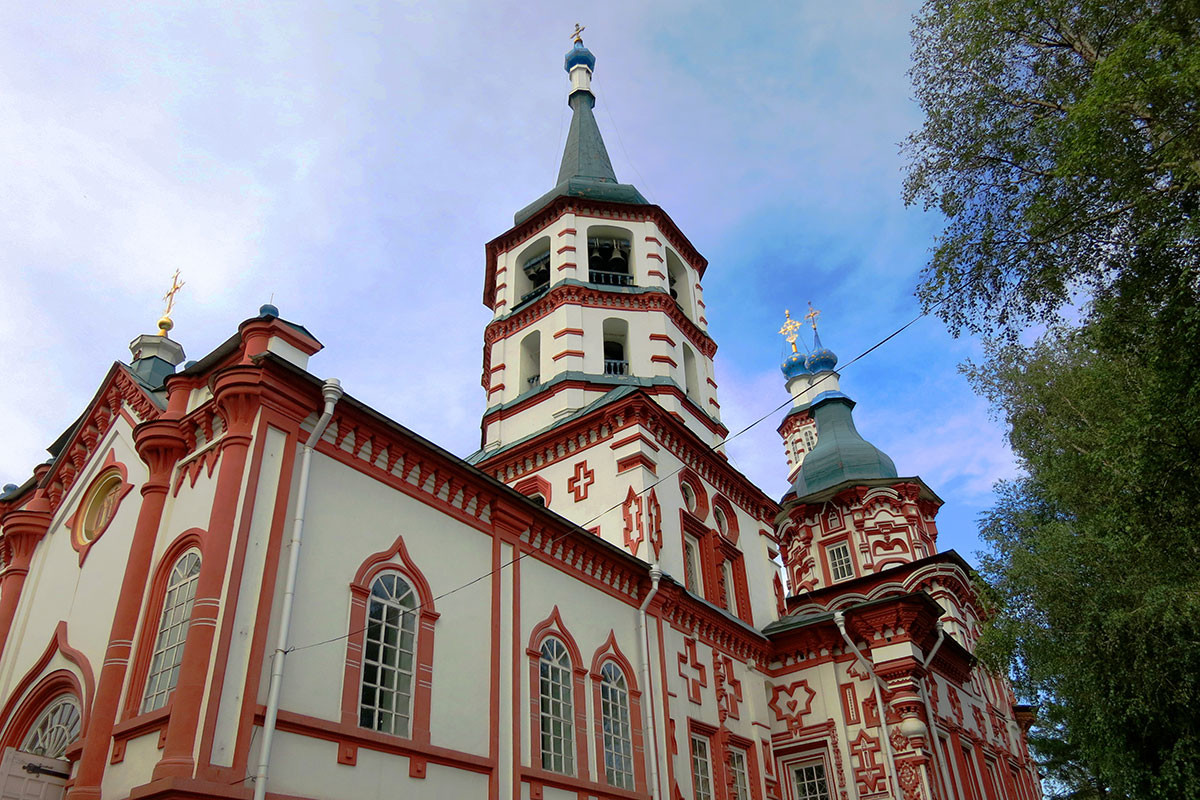 The Church of the Exaltation of the Cross in Irkutsk

Many Russian churches in the 18th century continued to be built out of wood. Most of them have not survived, however, some unique specimens have, especially in the north of the country. For example, the famous Church of the Transfiguration on the island of Kizhi (1694-1714). 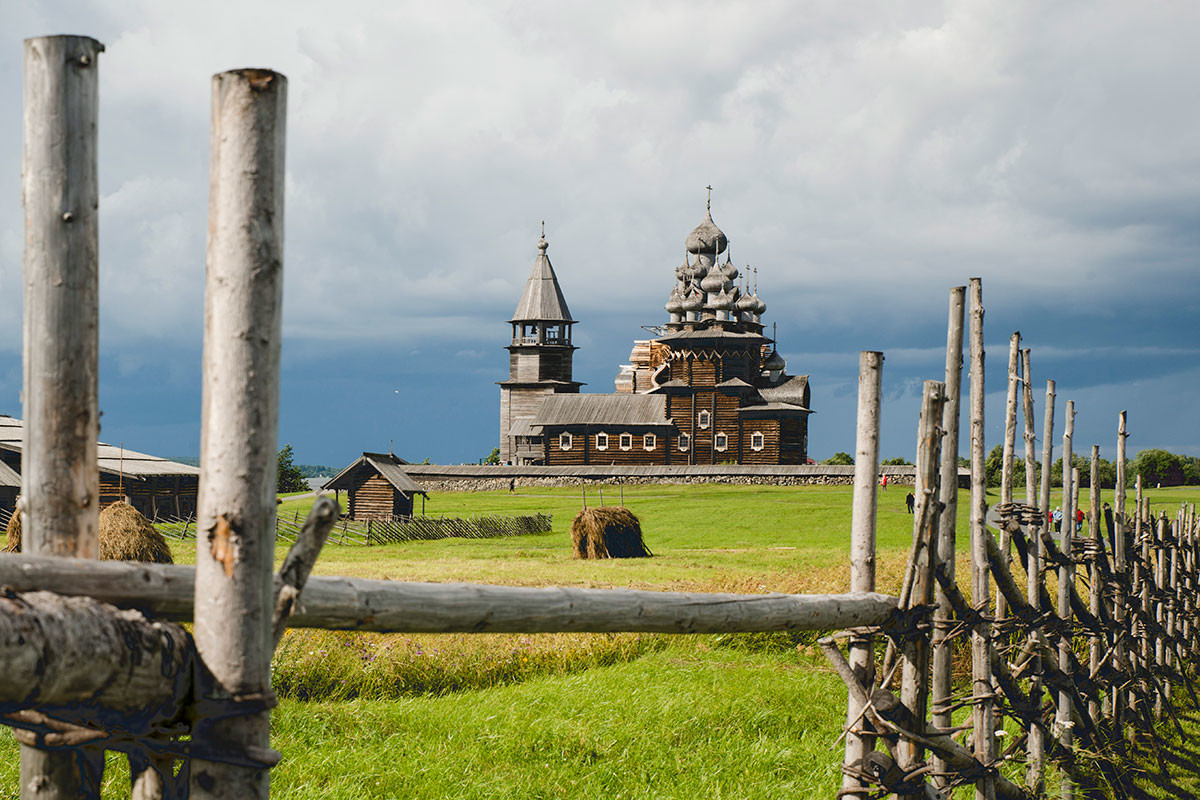 The Church of the Transfiguration on the island of Kizhi

Click here to find out more about Russian wooden churches.

Having grown tired of elaborate church designs with their abundant decor, Russian architects switched to a more restrained classical style, which was also popular in Europe. Churches built in this new style were particularly common in the new Russian capital, the city of St. Petersburg. Take, for example, the Trinity Cathedral of the Alexander Nevsky Lavra, built in 1776-1790. 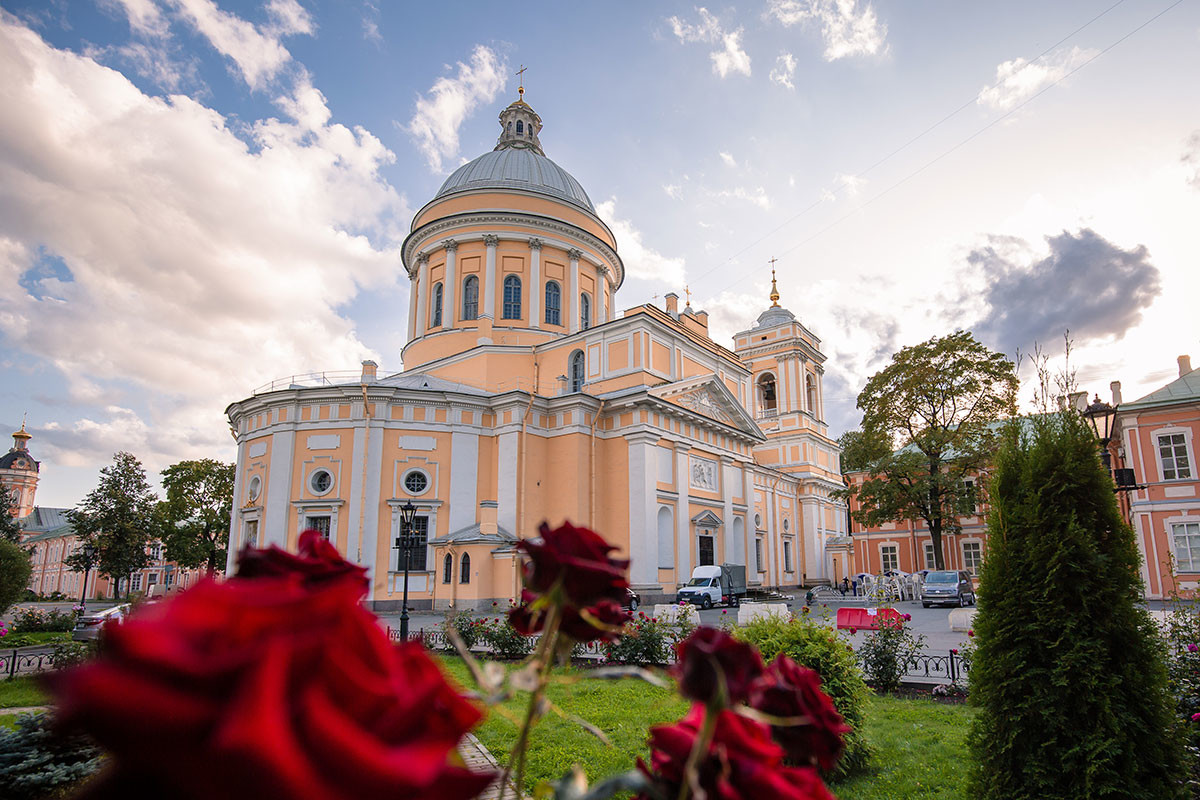 The Trinity Cathedral of the Alexander Nevsky Lavra

One of the city’s landmarks, the Kazan Cathedral (1801-1811) with its famous colonnade, was built in the classical style, too. 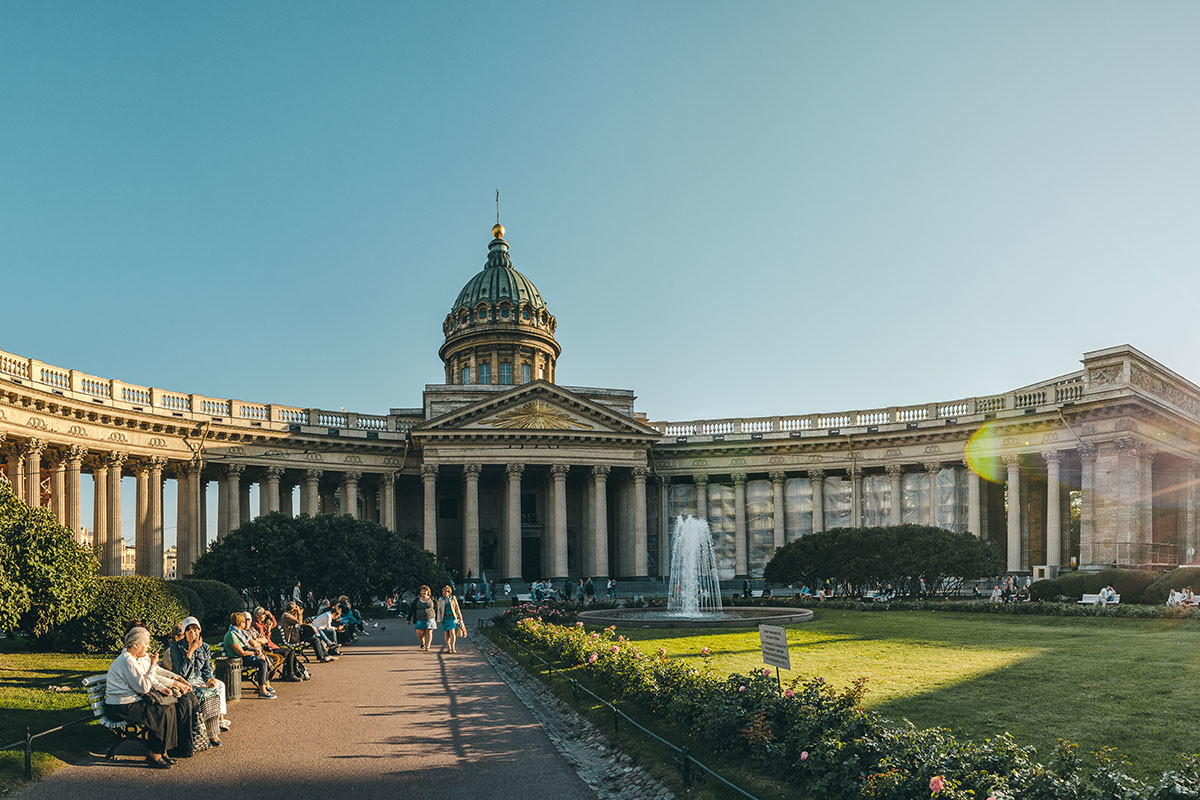 The Kazan Cathedral in St. Petersburg

The late 19th century was marked by a fashion for a return “back to the roots”. Architects (as well as artists) developed an interest in authentic, pre-Petrine Russia, not “spoiled” by the influence of Europe. Having soaked up the style of the ancient churches of North-Eastern Russia and Novgorod, as well as Russian fretwork, they began to build churches in the “neo-Russian” style. On the spot in St. Petersburg where Emperor Alexander II was assassinated, his son Alexander III ordered the construction of a church and himself selected a design for it, in the Russian style. The result was the Church of the Savior on Spilled Blood (1883-1907), which is often confused with the Cathedral of St. Basil the Blessed in Moscow, built four centuries earlier. 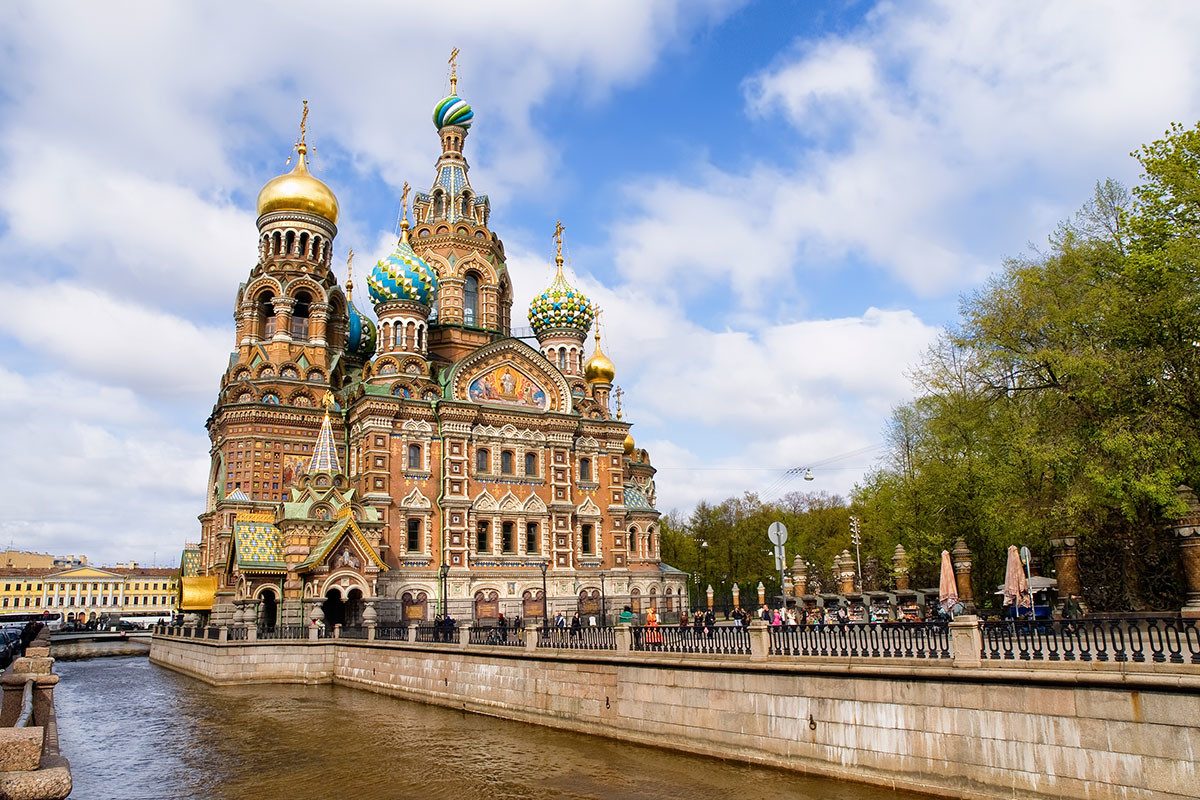 Some architects, like Konstantin Thon, relied heavily on Byzantine traditions. A striking example is the Cathedral of Christ the Savior in Moscow. It was built in 1837-1860, but was destroyed by the Soviet regime in the 1930s. The present-day building, erected in the 1990s, is an exact replica of the original. 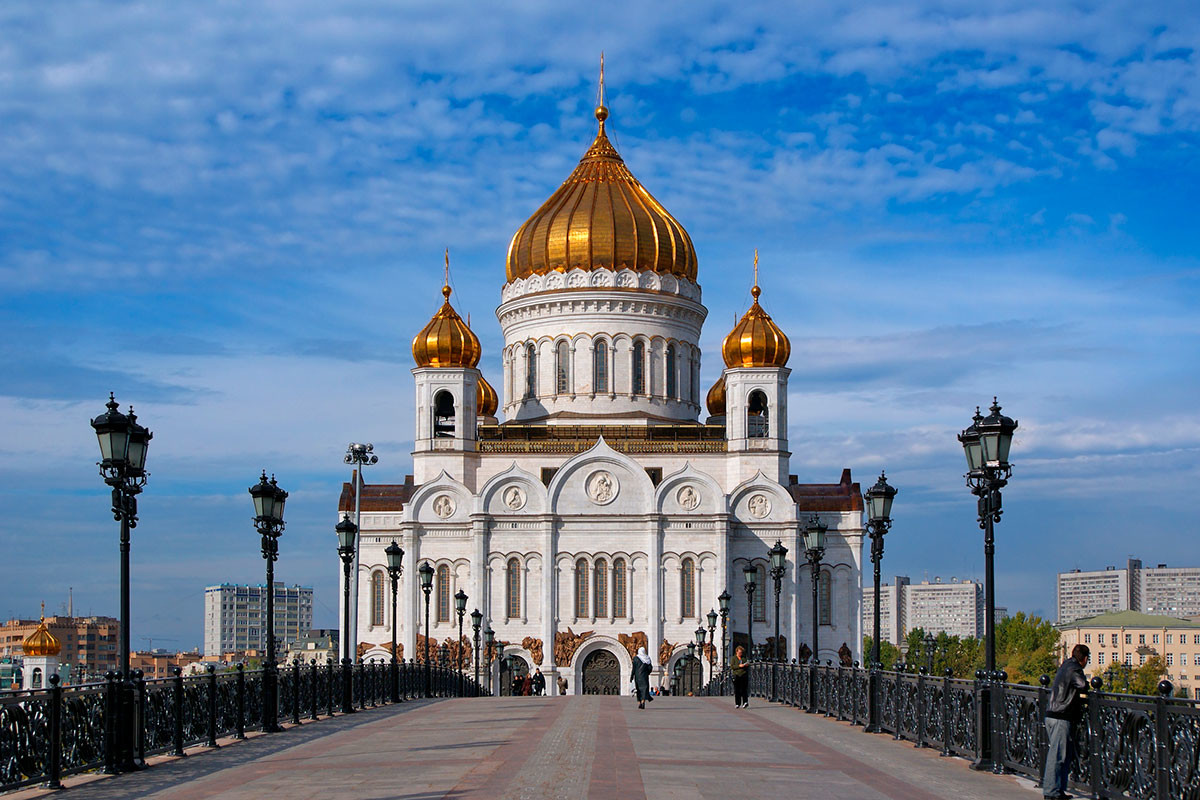 The Cathedral of Christ the Savior in Moscow

The Church of the Savior Icon in Klyazma (1913-1916), meanwhile, combines the Russian style and elements of Art Nouveau. 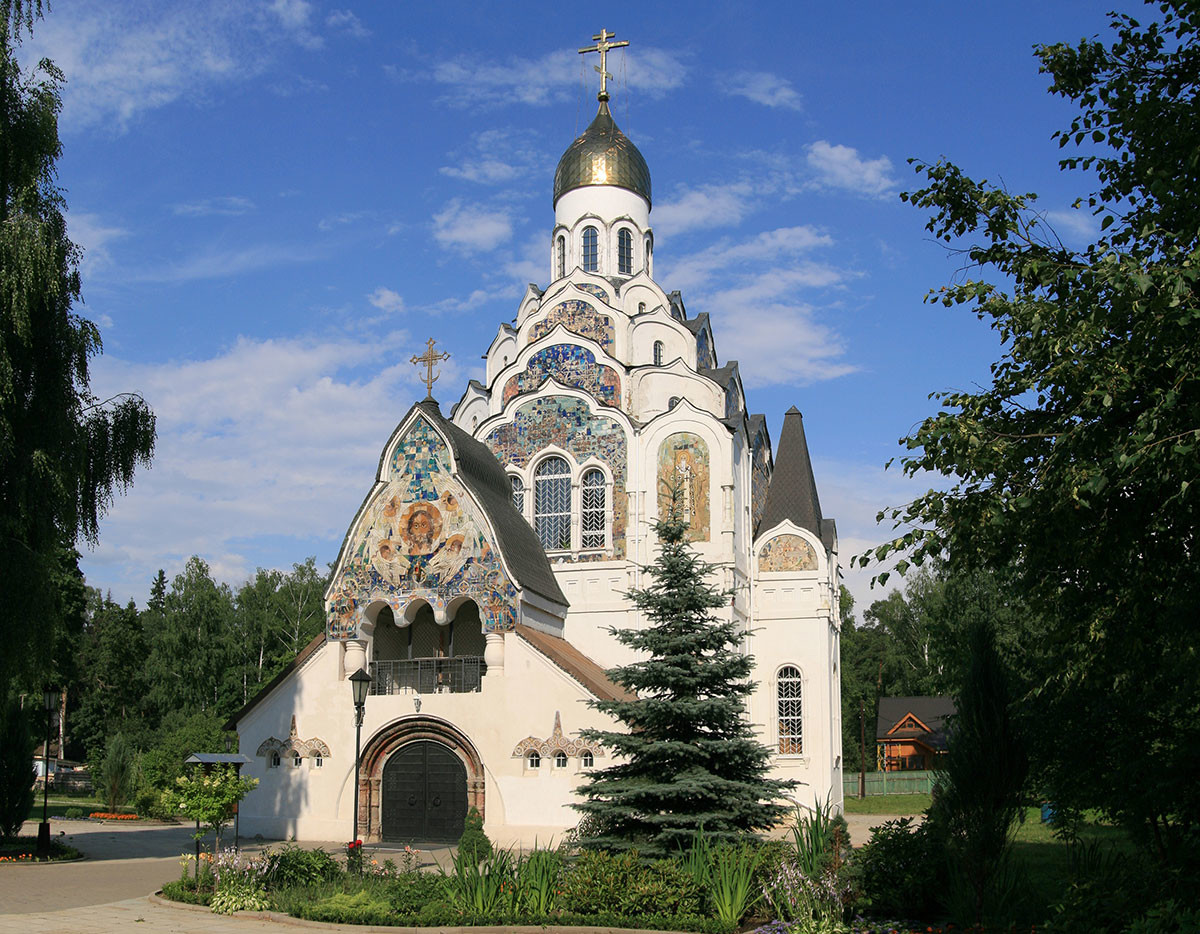 The Church of the Savior Icon in Klyazma, Moscow Region

In Soviet times, more churches were demolished than built. And yet, several projects conceived before the Bolshevik Revolution were somehow brought to life (click here to find out more). In present-day Russia, there are many churches being built. Quite a few of them are designed in the baroque or classical style, albeit in their modern interpretation. However, there are quite a few churches being built in the neo-Russian style, too, with Art Deco elements. For example, the Church of the New Martyrs and Confessors of the Russian Orthodox Church in Lubyanka in Moscow, which was built in 2013-2017. 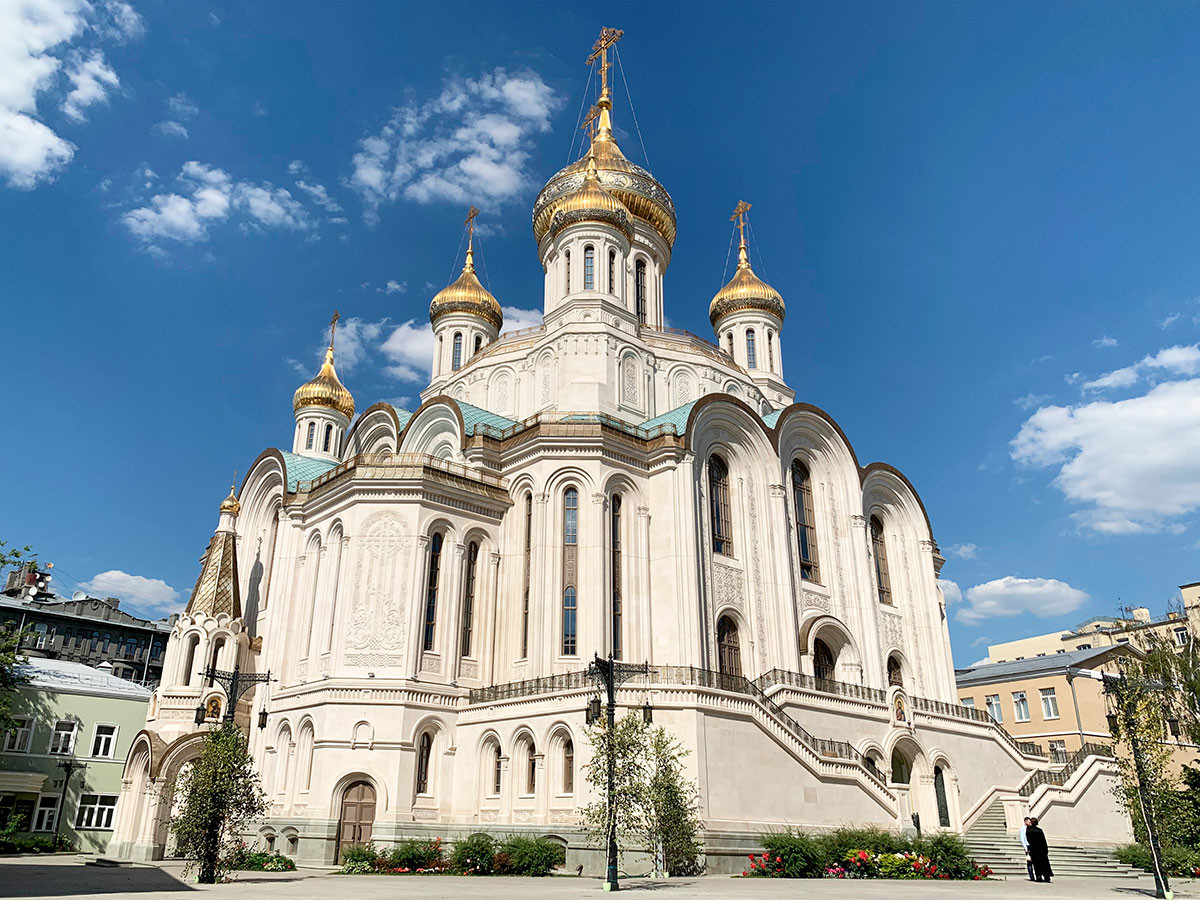 The New Martyrs and Confessors of the Russian Orthodox Church, Moscow