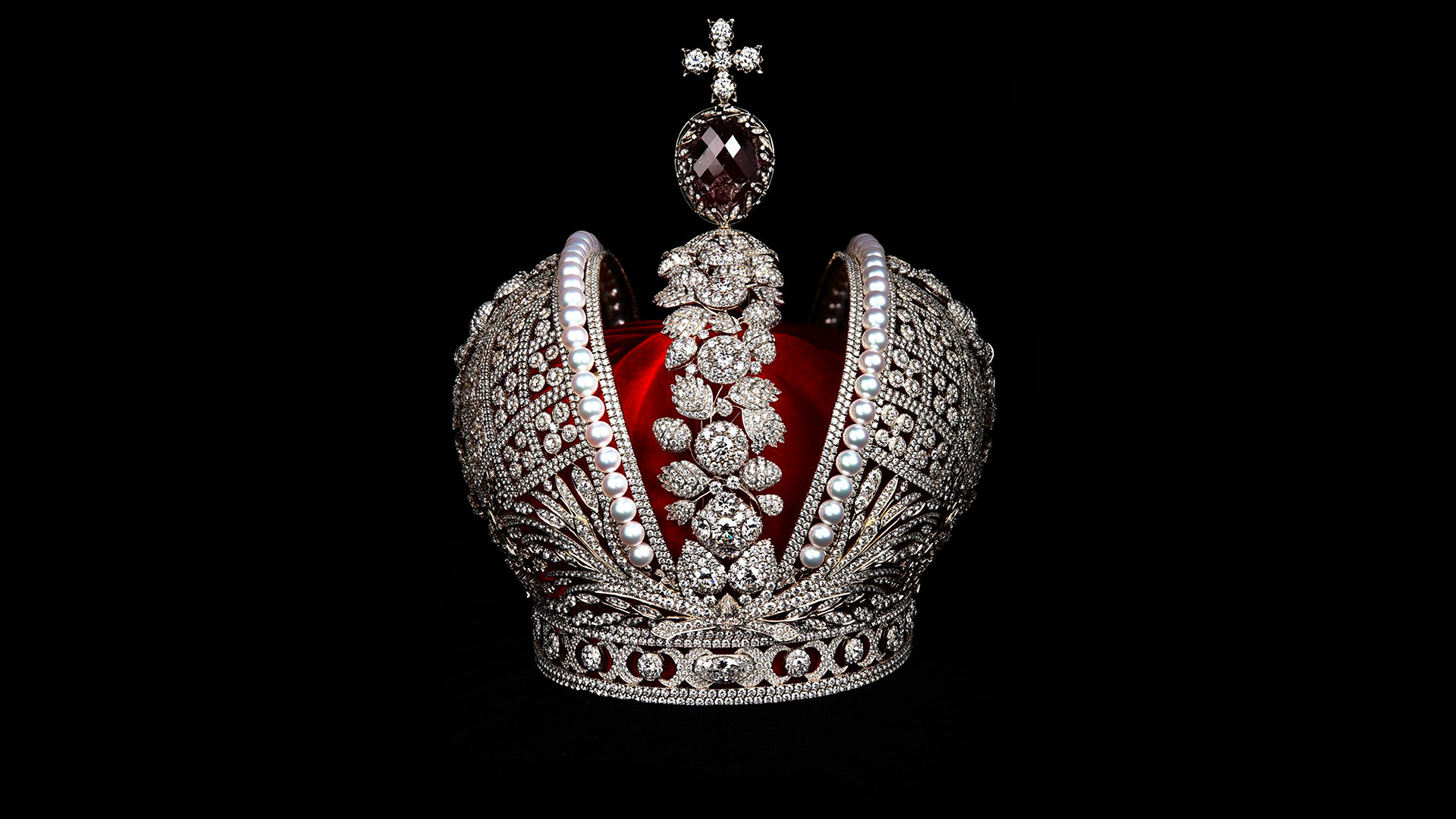 Heritage Images/Getty Images
Crowns were usually made individually for each emperor and then broken up afterwards. But some pieces of imperial regalia did survive and can now be seen in museums.

Before Peter I, the Tsar's most important regalia was the so-called Cap. The most famous one – known as Monomakh's Cap – is in the collection of the Moscow Kremlin. At the time, they even used the phrase "to don the nuptial crown of Tsardom" rather than "to be crowned."

Peter the Great revised the old traditions and borrowed some rituals from Western monarchies. He held the first coronation ceremony with his spouse, the future Empress Catherine I – whose crown was taken to pieces, although the Armory Chamber of the Moscow Kremlin does still have its frame. The crowns of Peter II and Elizabeth Petrovna were also broken up. The crown of Catherine the Great, however, was spared this fate.

Moreover, it was this crown that all the subsequent Romanov Tsars wore when they themselves took the throne. In addition to their large crown, rulers also had smaller crowns for particular occasions. Incredibly, some of these items of imperial regalia have survived to this day. 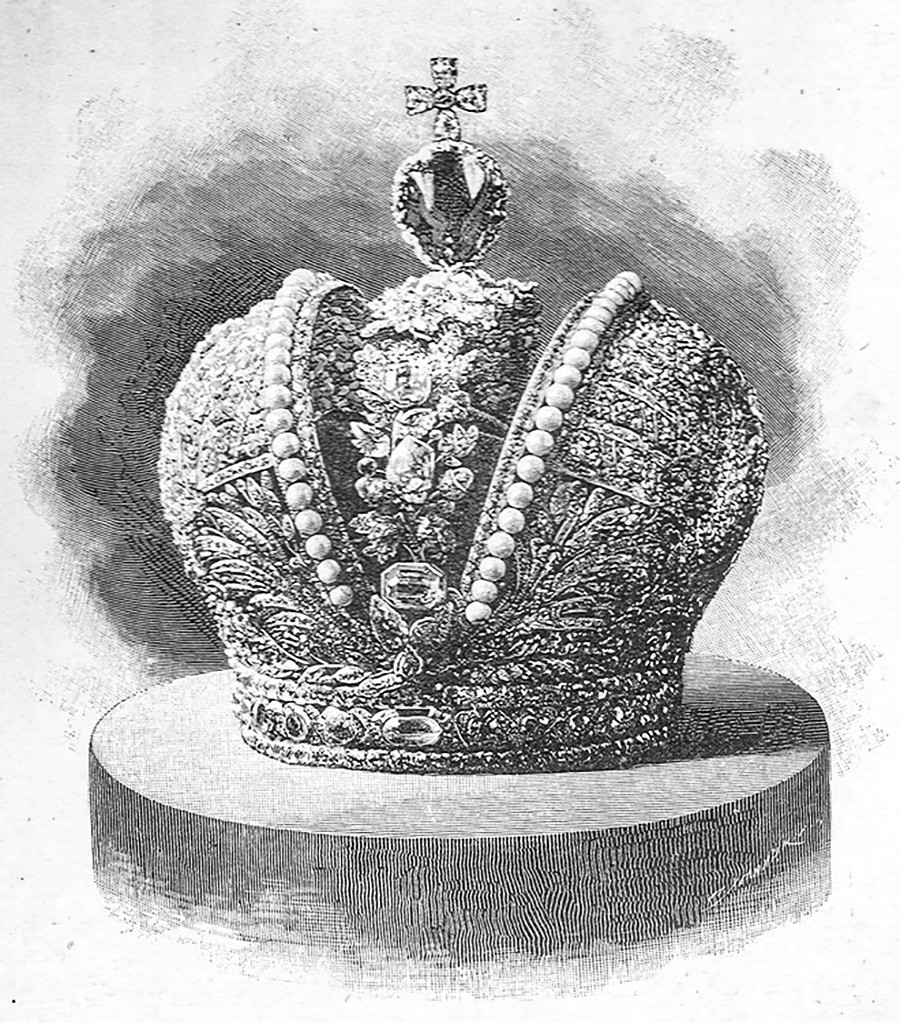 Made for the coronation of Empress Catherine II in 1762, this is the most famous crown of the Russian Empire. It is adorned with nearly 5,000 diamonds, 75 natural Indian pearls and an enormous spinel. The frame is of silver. Besides actual coronations, it was also worn at formal ceremonies. The last time it was worn was when Nicholas II opened the State Duma in 1906. 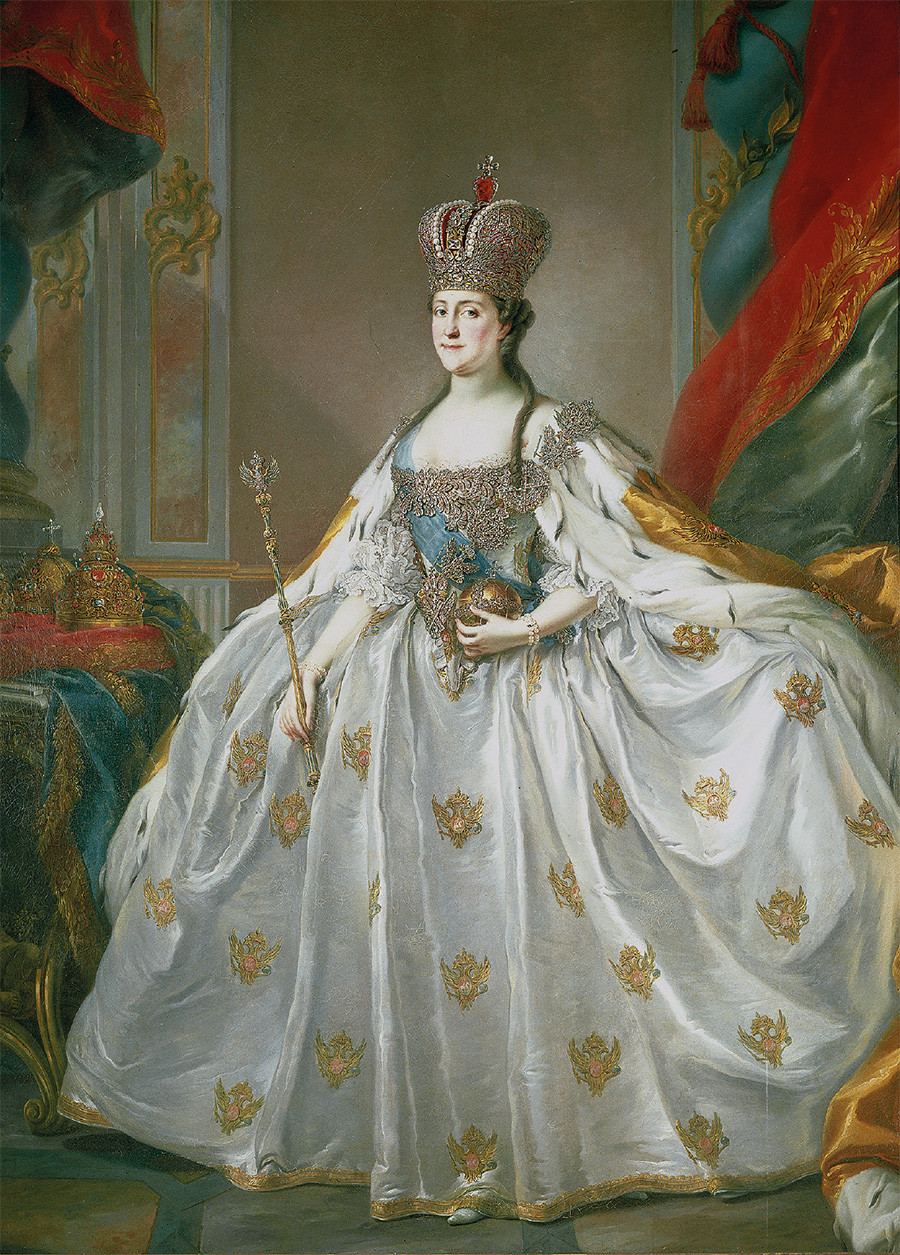 The crown is now in the collection of the Armory Chamber of the Moscow Kremlin along with other important items of imperial regalia, such as the Imperial Scepter and Imperial Orb. The crown never leaves the museum, so you can only see the original in Moscow. However, a replica of the crown was made in 2012 and this is what is shown at all exhibitions elsewhere. The replica is made from white gold, Australian pearls and rubellite, and is set with diamonds from Yakutia—around 11,000 stones in total. 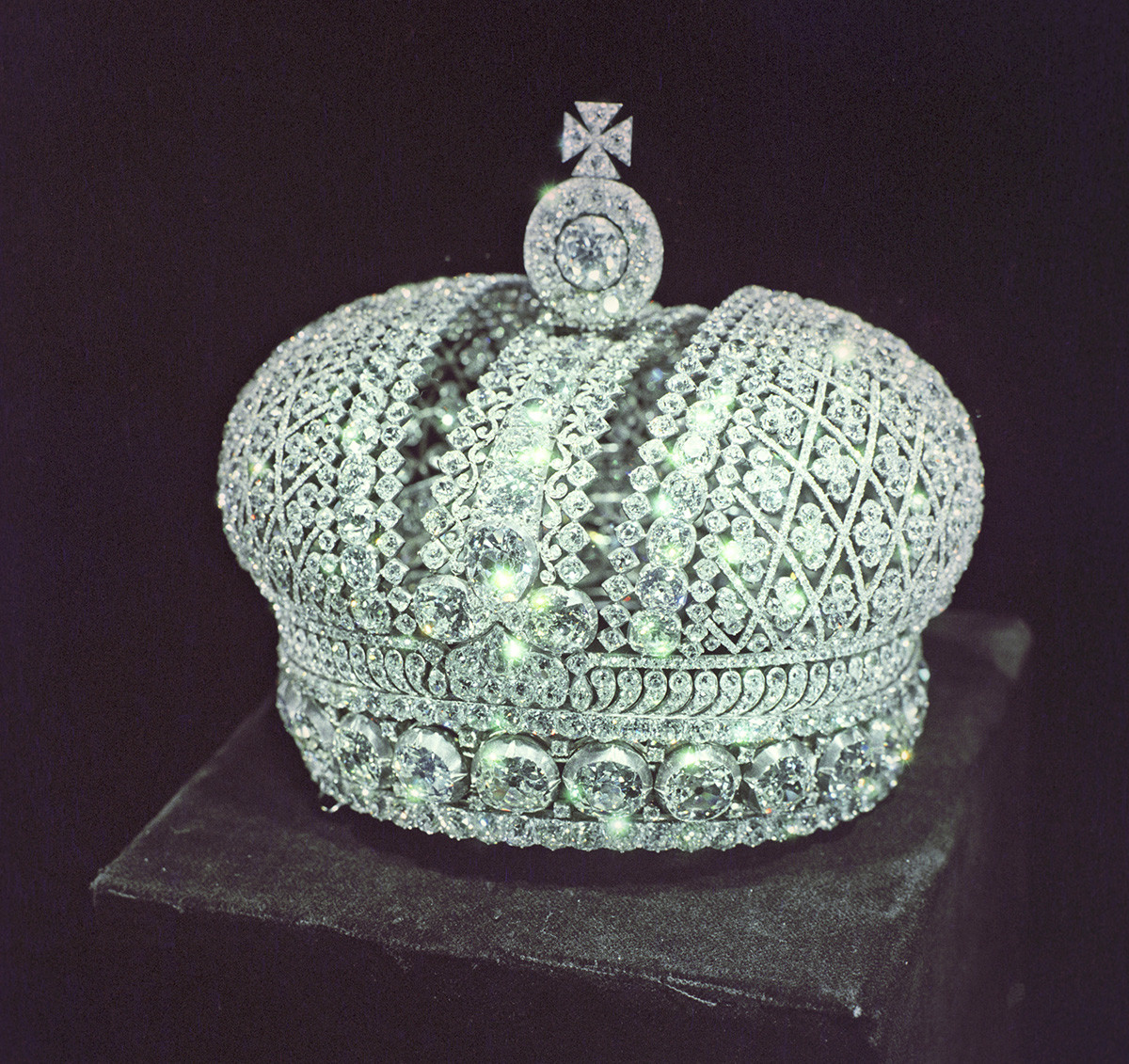 The lesser crown was placed on the head of the consort of an Emperor or Empress during their coronation. This tradition emerged after Catherine II (the Great), and what’s more, the crown was considered private property and could be inherited. In most cases, lesser crowns were taken to pieces and new pieces of jewelry were made from them and just this one small crown has survived to this day. Experts are divided as to who owned it. Some historians believe the small crown was made in 1801 for the consort of Alexander I, Elizabeth Alexeievna, while others think it was made in 1856 for the consort of Alexander II, Maria Alexandrovna. 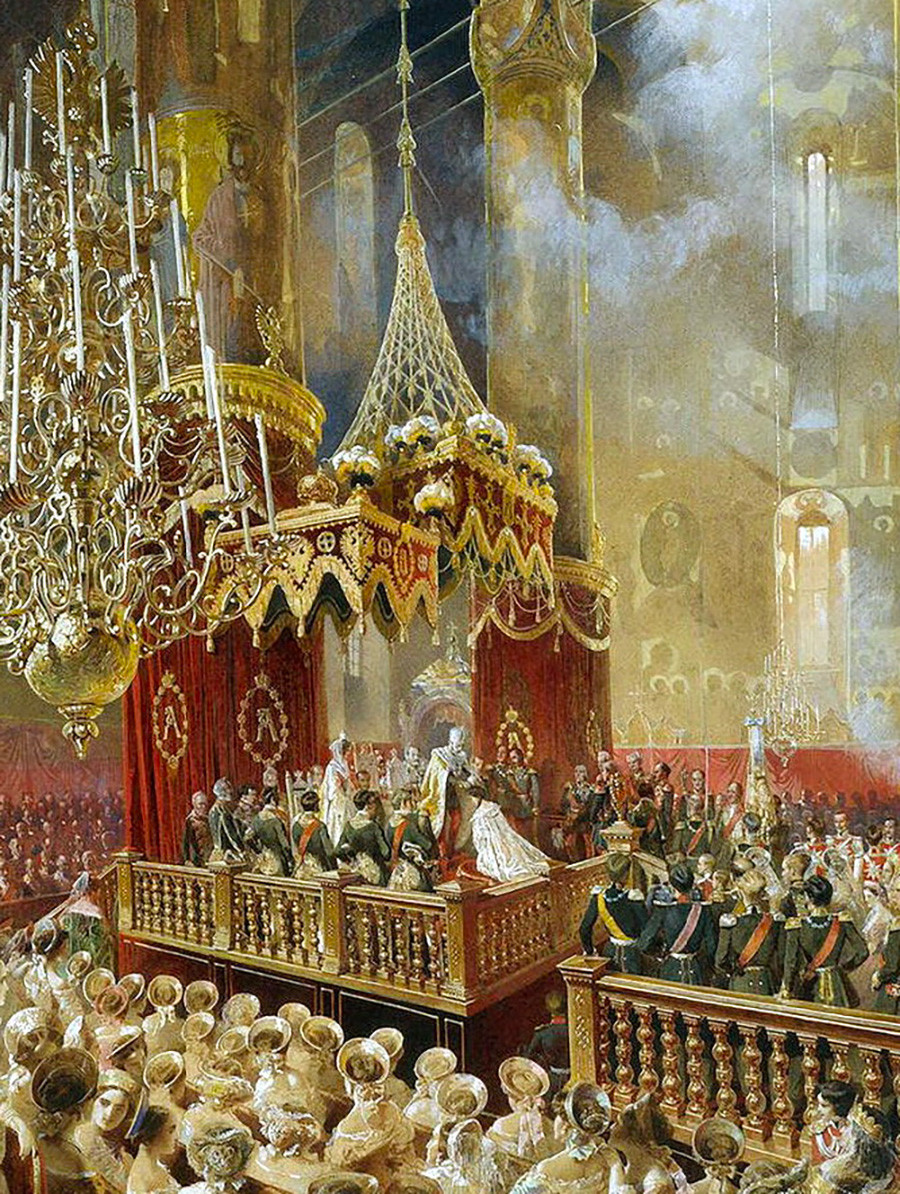 It is much smaller than the Great Imperial Crown but similar in shape and is also made of silver and richly decorated. It has 48 large diamonds and 200 small ones (small by tsarist standards anyway). The Small Imperial Crown is also held in the collection of the Armory Chamber.

Intriguingly, when jewelers compiled an inventory of the royal treasures after the 1917 Revolution, the list included another small crown but nothing is known about it. Most likely it was broken up and sold at auction in Europe. 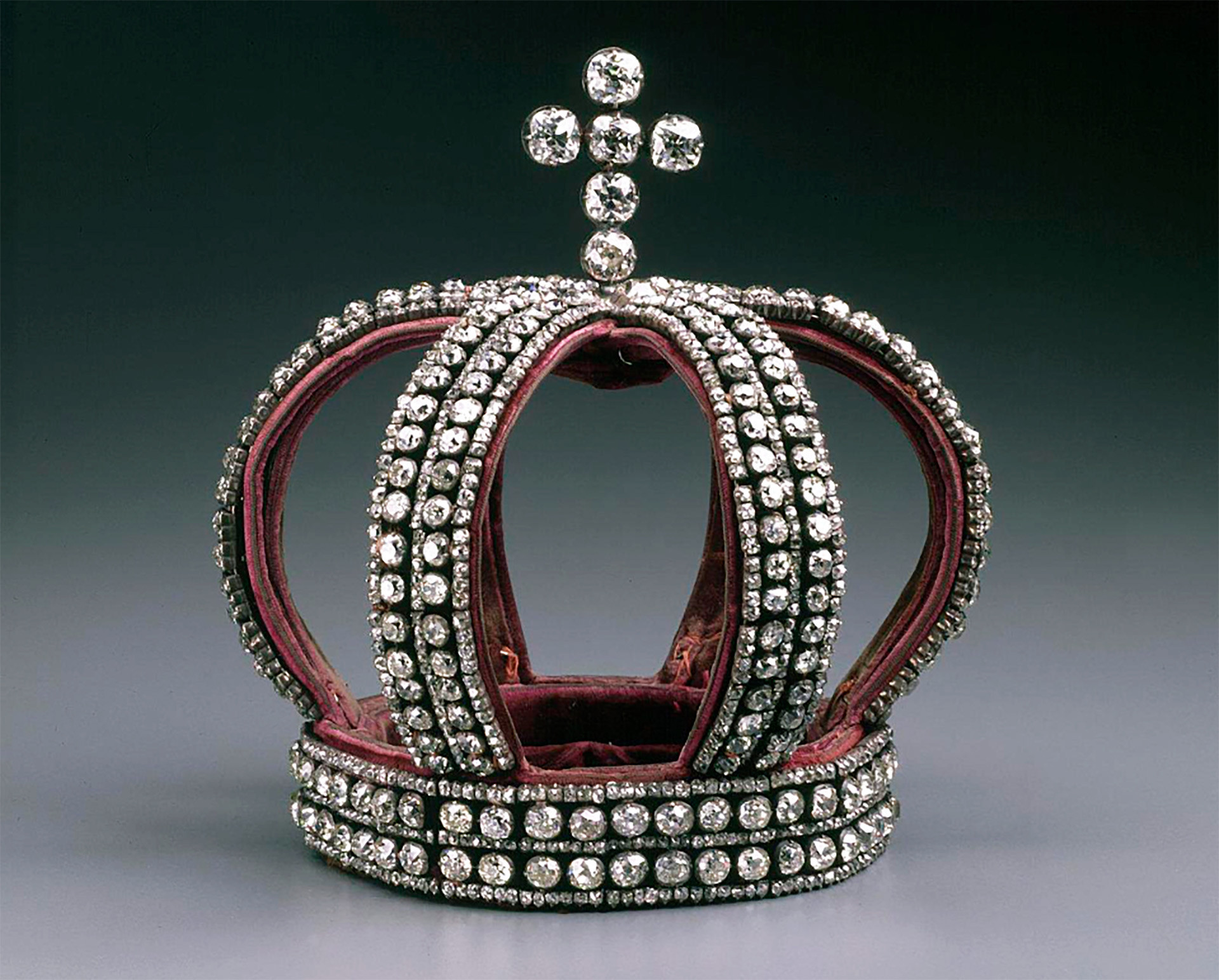 The crown is now being held in Washington, D.C.

This small, elegant crown of velvet studded with diamonds was a piece of wedding regalia. Elizabeth Feodorovna, the sister of the last Empress, Alexandra Feodorovna, wore it for her wedding in 1884. Later, other female members of the House of Romanov wore it as well. In all likelihood the crown was not broken up because several grand dukes’ weddings took place in the late 19th century. Apart from the crown, the bride also wore a diadem with a pink diamond on her head and cherry drop earrings. As you can imagine, this all weighed quite a bit and was not even the only jewelry they wore. 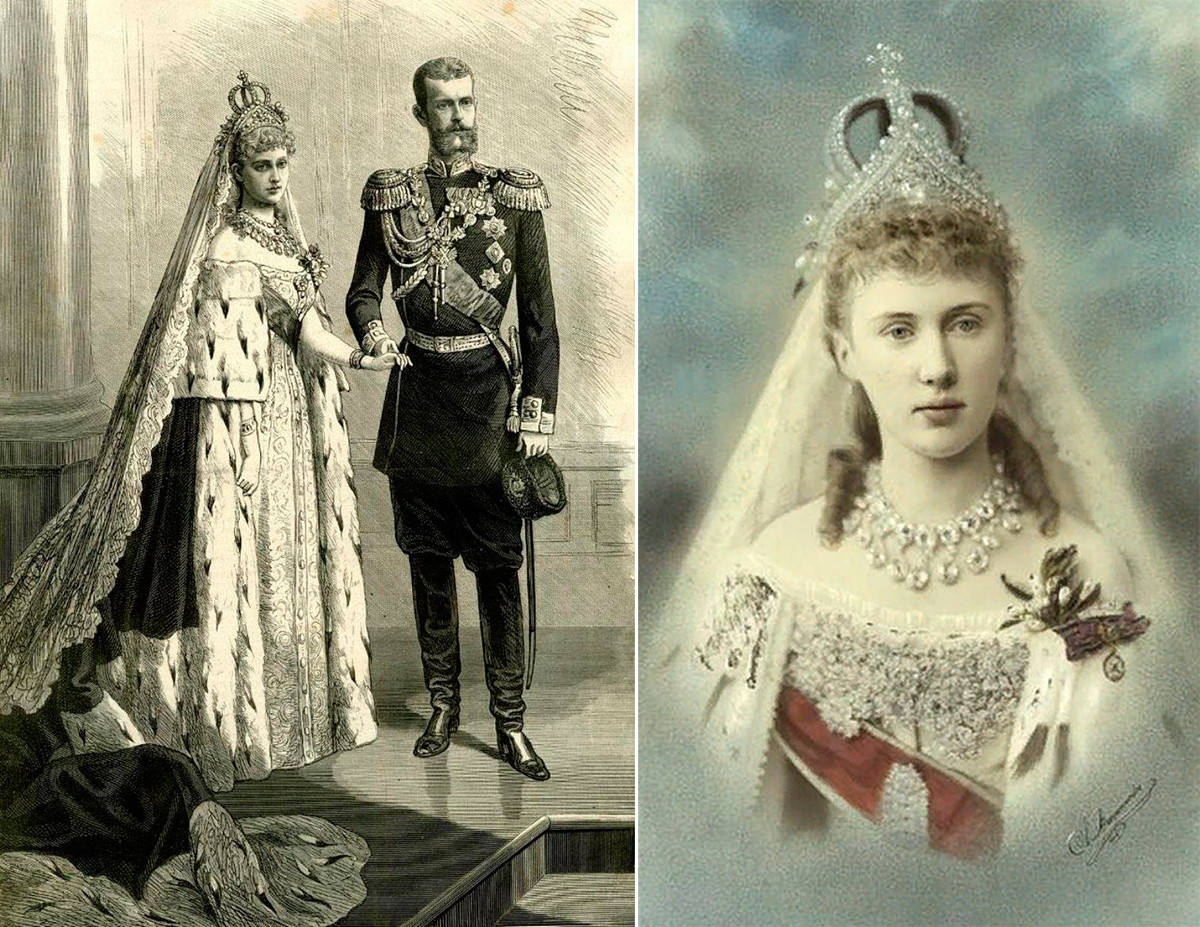 After the Revolution, the crown was not regarded by jewellers as particularly valuable and was sold in 1926 to an antiques dealer named Norman Weiss. It later showed up at auction a number of times and adorned the heads of Cartier models and was even worn by winners of beauty contests. In 1966, it was purchased by Marjorie Post, a collector of Russian art. Today the crown is kept at the Hillwood Museum, which she established up near Washington.

Read more: How did Romanov family jewelry wind up in the United States? 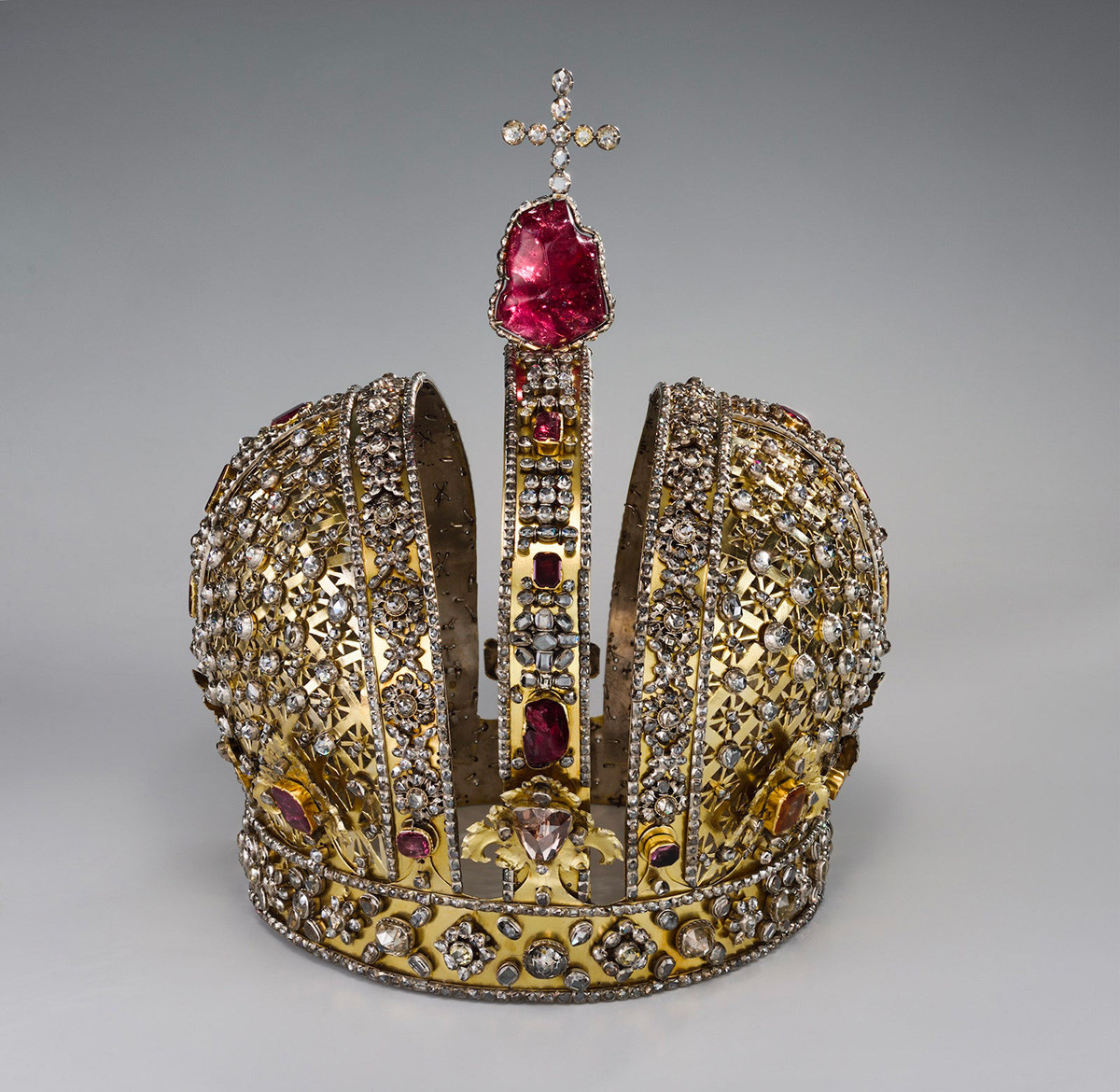 This niece of Peter the Great ruled from 1730 to 1740 and was famous for her love of luxury. This enormous crown of silver and gilding was made for her coronation. It is adorned with 2,500 diamonds and rubies, taken in part from the crown of Catherine I, as was its biggest stone, a tourmaline. Initially, the crown also had around 100 pearls, but, according to an inventory made after the Empress's death, these were already missing by then. 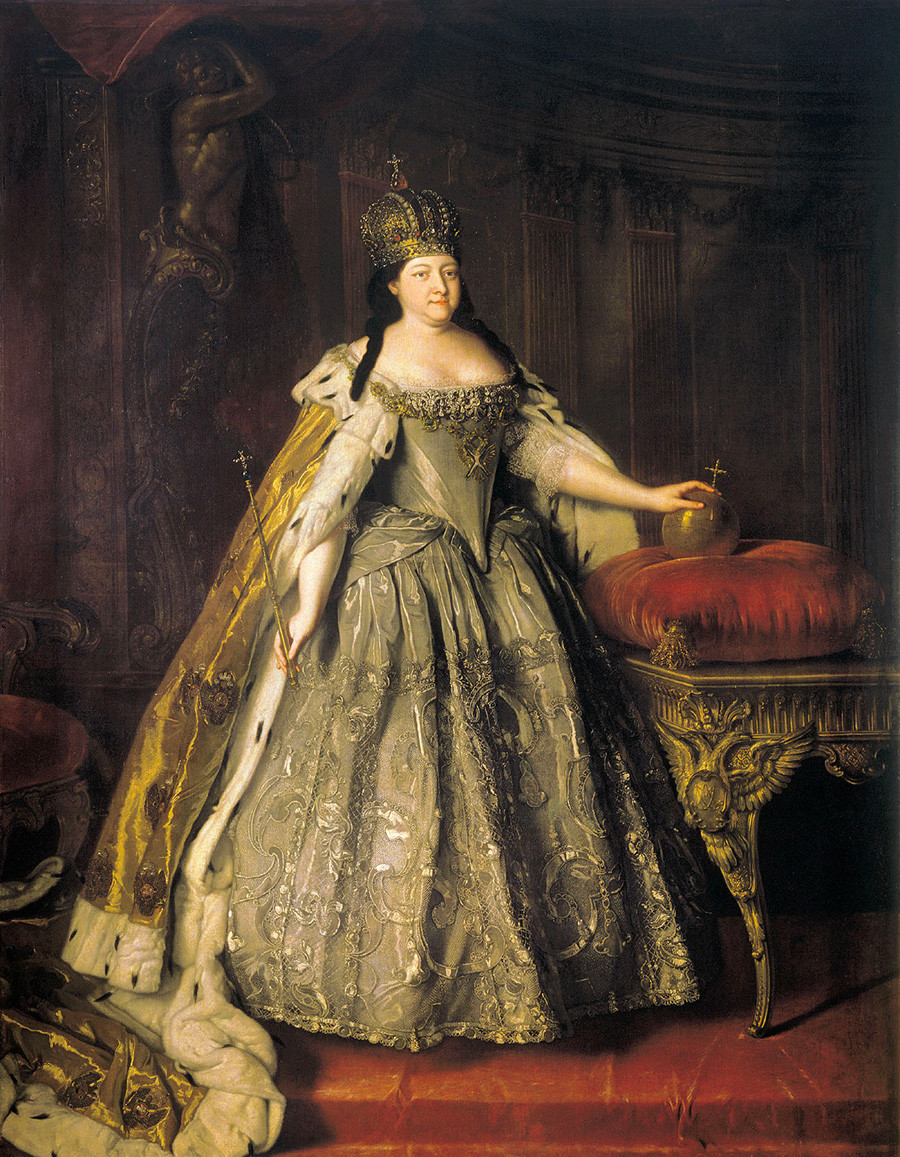 It is not quite clear why it was not broken up after the ceremony, but we do know that it was also used in 1829 for the coronation of Emperor Nicholas I in Warsaw, the capital of the Kingdom of Poland, which was part of the Russian Empire following the war with Napoleon. After the ceremony, the crown became part of the Armory Chamber’s collection and remains there to this day. 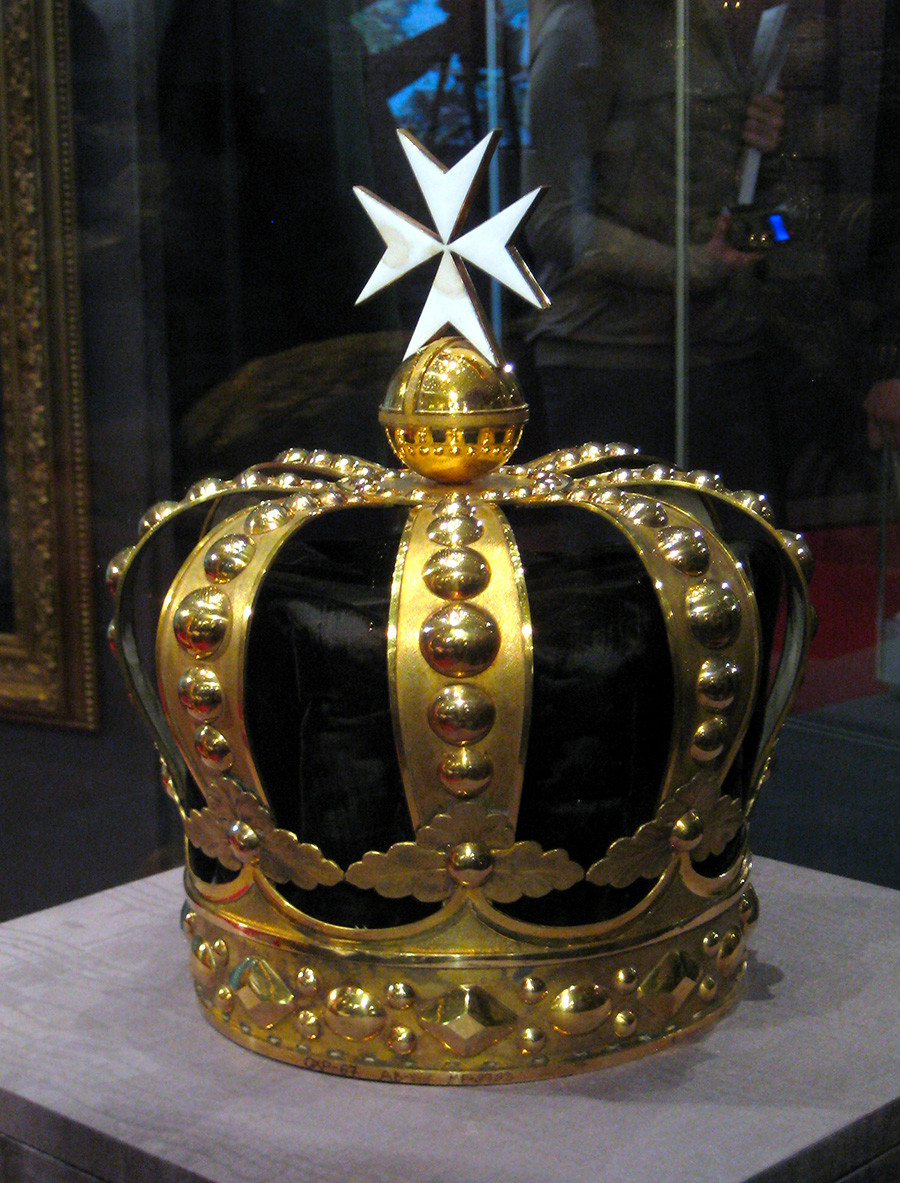 Maltese Crown of Paul I

In 1798, Emperor Paul I took the title of Grand Master of the Knights of Malta, one of the oldest chivalric orders in the world and which to this day styles itself as a state. The Grand Master was the head of the Order and the highest rank in the hierarchy of command. But how did the title come to be conferred on the Russian Emperor, who himself was baptized into the Russian Orthodox Church?

What happened was that in 1798 Napoleon seized Malta, and the knights appealed to Paul I to take command of the Order and grant them refuge. The Emperor agreed, and even added the Maltese crown to the coat of arms of the Russian Empire. 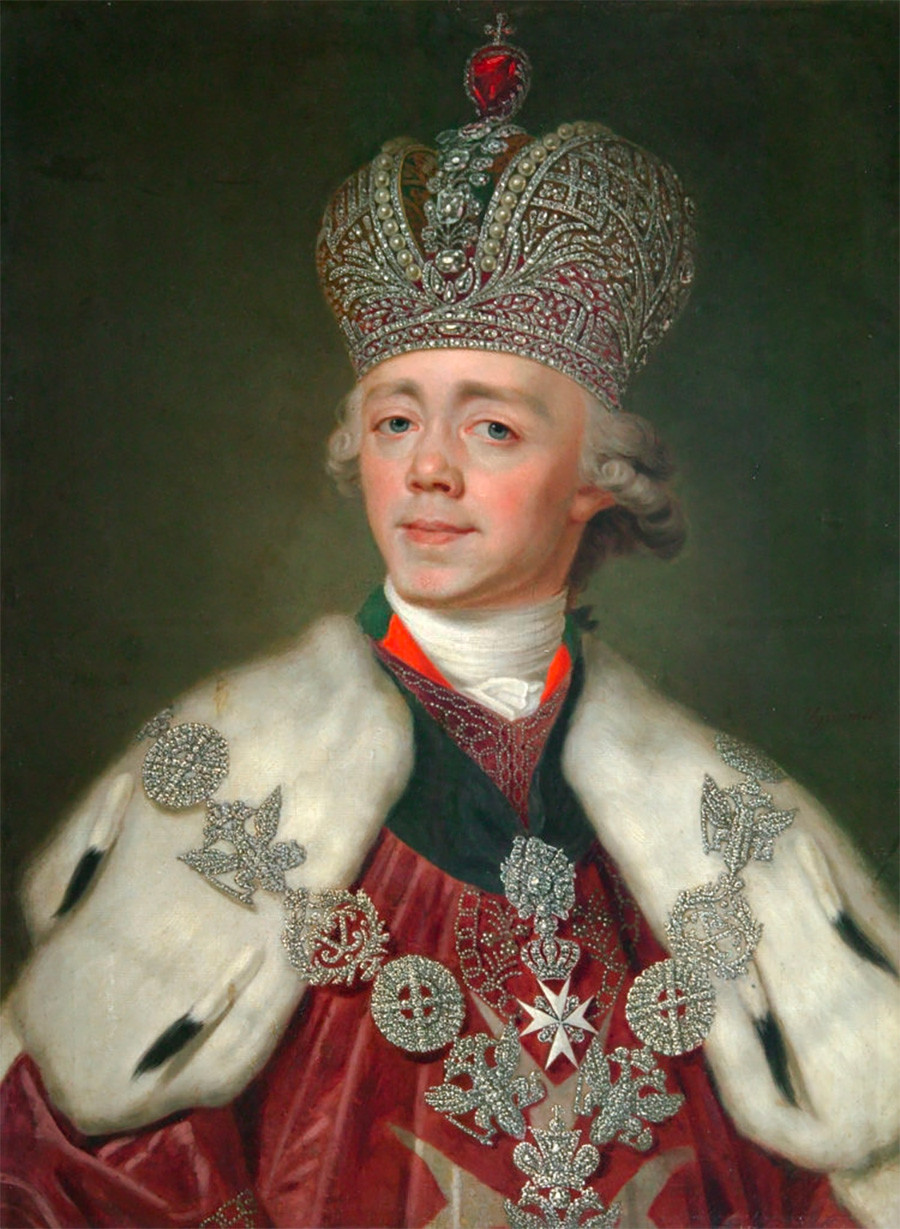 Museum of the Academy of Arts

We do not know with absolute certainty who made the Grand Master's crown. According to some accounts it was Russian court jewellers, while others claim it was actually made by Maltese goldsmiths. The crown is of silver gilt and is in the form of arched bands that support an orb with the Maltese cross.

Paul I's successor, Alexander I, renounced the status of Grand Master and removed the Maltese crown from the coat of arms, although the knights continued to live in Russia until they established their headquarters in Rome in 1834. The crown has been kept in the Armory Chamber since 1827.

It might be added that the crest of the town of Gatchina near St. Petersburg retains the Maltese cross to this day. It can be found at the Priory Palace, the residence of the Order.