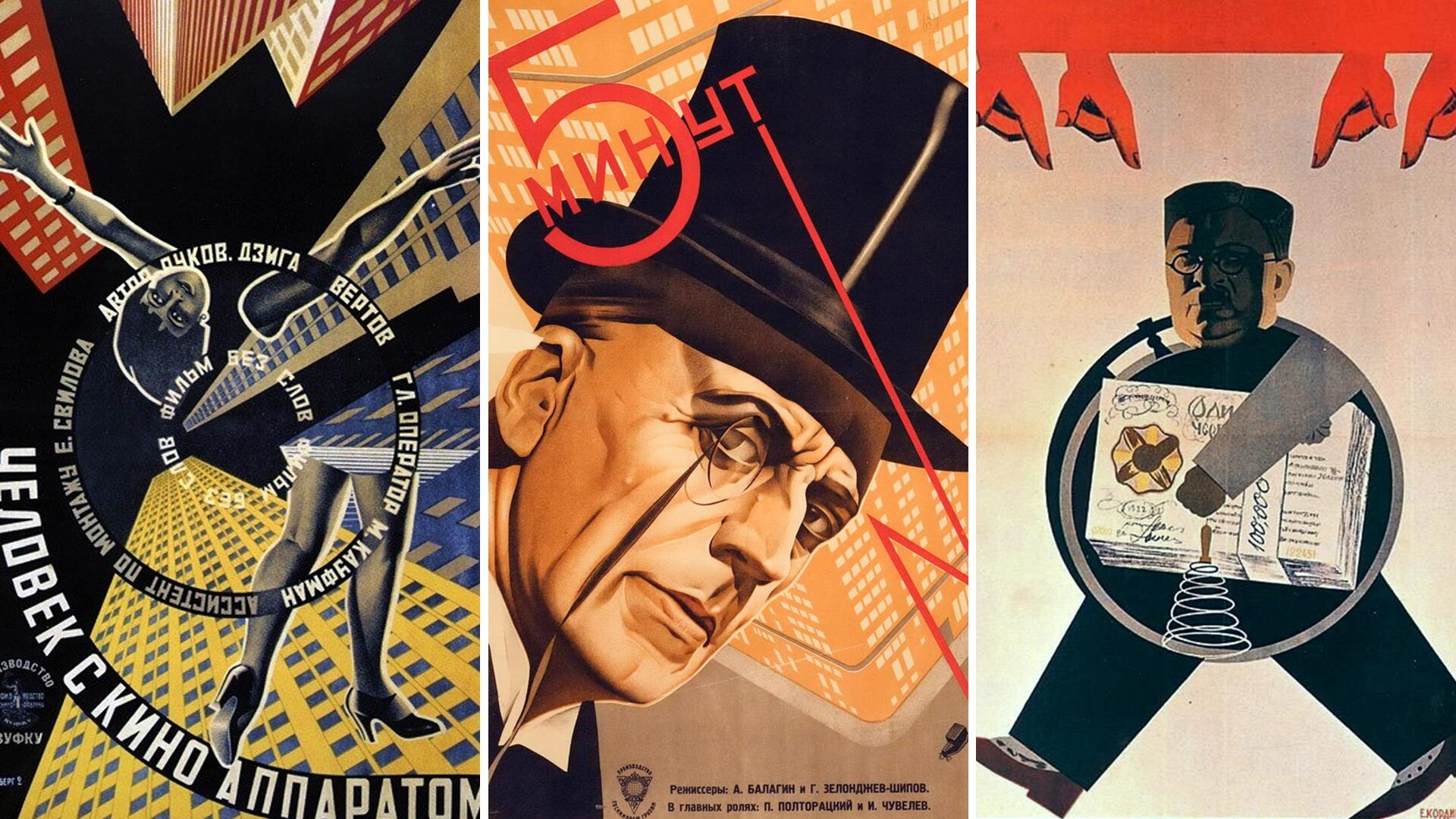 Archive photo
The Bolsheviks knew the value of the new art of cinema, and made it one of the most important ways of entertainment in the new country.

The leader of the 1917 Revolution, Vladimir Lenin considered that cinema is 'the most important of the arts'. Of course he had his own goals when saying that - and of course cinema was a great propaganda tool for illiterate masses. However, the early avant-garde Russian cinema was revolutionary itself, and developed quite fast. The Soviets built cinemas throughout  the country to ensure all had access to the movies.

Here are some magnificent early 20th century film posters, that are pieces of art themselves. 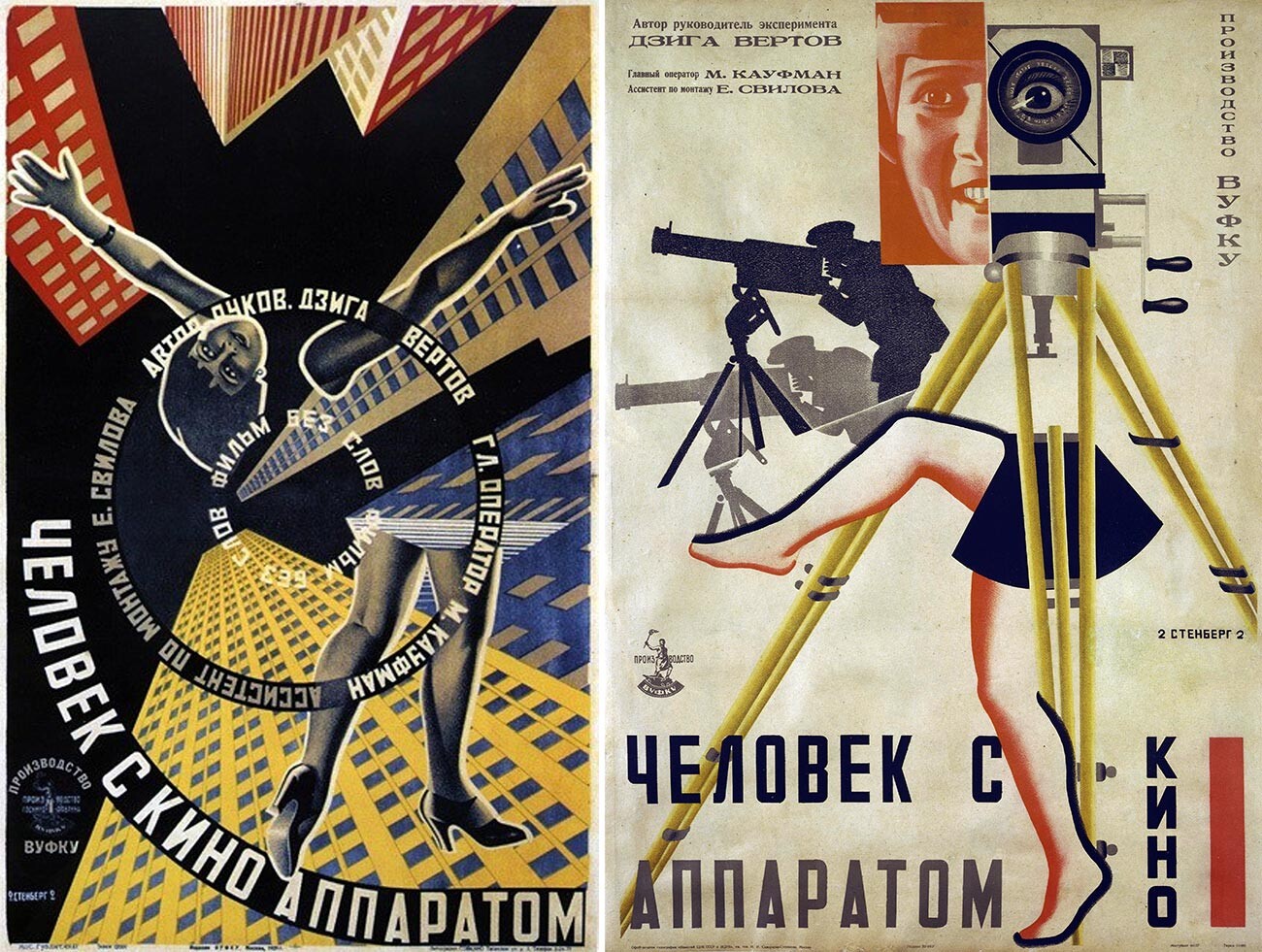 This experimental film is now considered a must-see classic. It really had a fresh eye on cinema -  at the very beginning of the film on screen titles insist that it's 'the cinematic communication of visual phenomena' without subtitles, scenario or theater. Both posters are a play on the film’s main metaphor - the camera as a ‘cinematic eye’ at the center of everything. 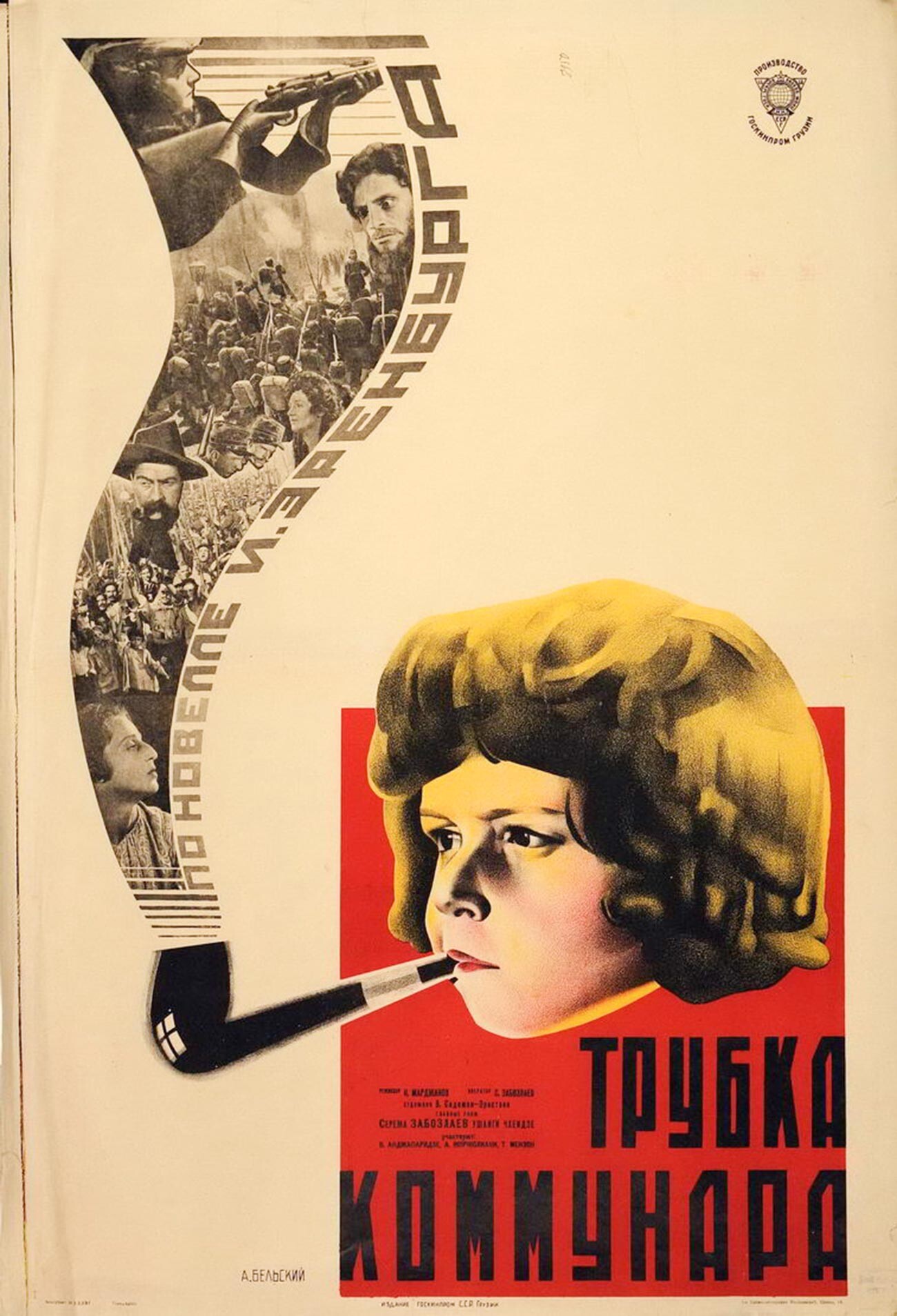 This movie is based on a short story by Soviet writer Ilya Erenburg and addresses things the Soviets cared about - the lower classes fighting for freedom. This is a story of a Paris bricklayer, Louis during the French Commune and Siege of Paris in 1870 and the proclamation of the Third Republic. The poster’s design comes from Louis’ constant companion - his pipe. Instead of smoke, the events of those revolutionary times (and movie stills) drift up from his pipe. 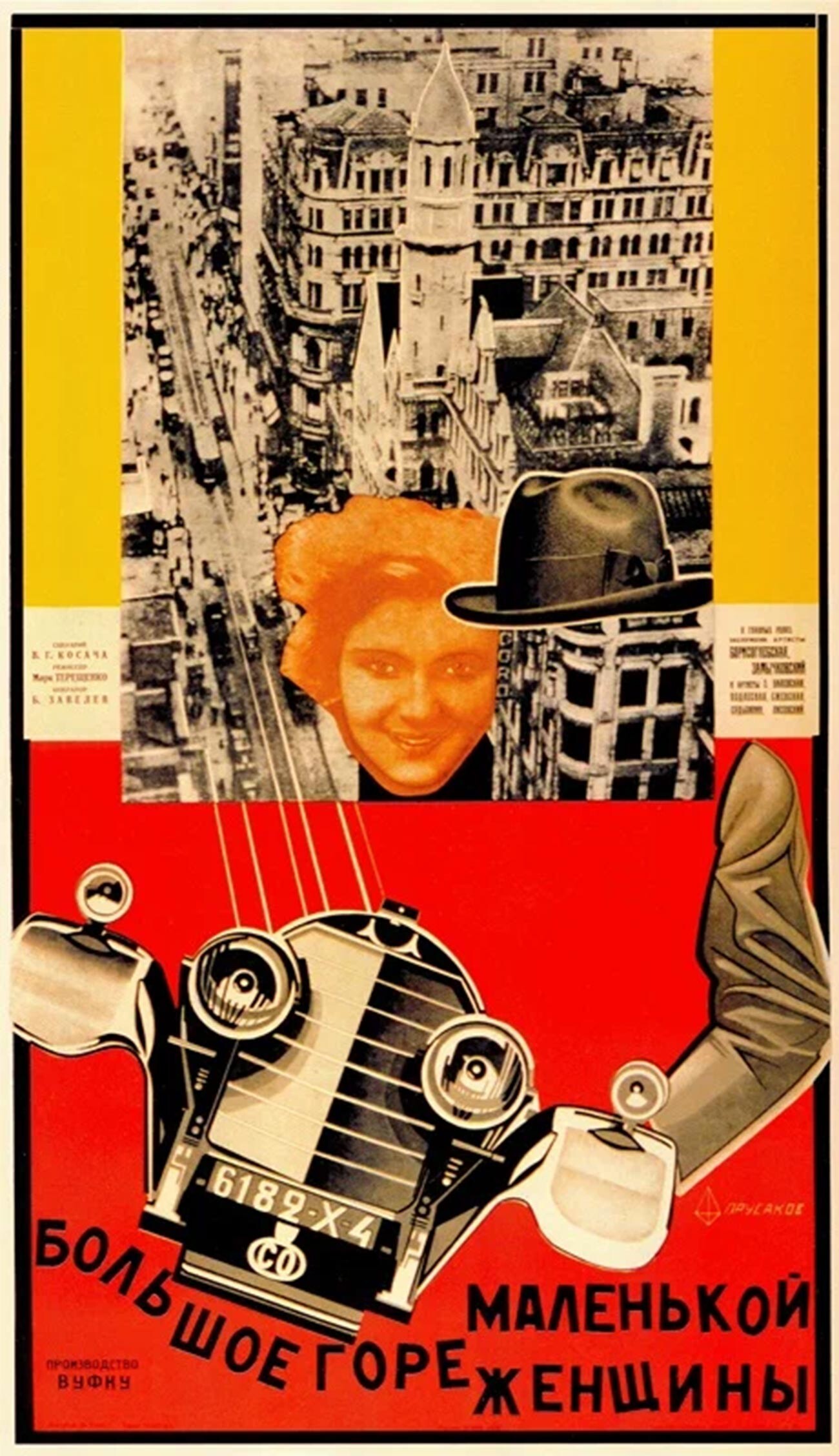 Galya lost her husband during the Civil War in Russia, but throughout the years she remains faithful to him, even though she meets a new, and good, man. This film is a result of the sexual revolution of that time, and a new vision of marriage. 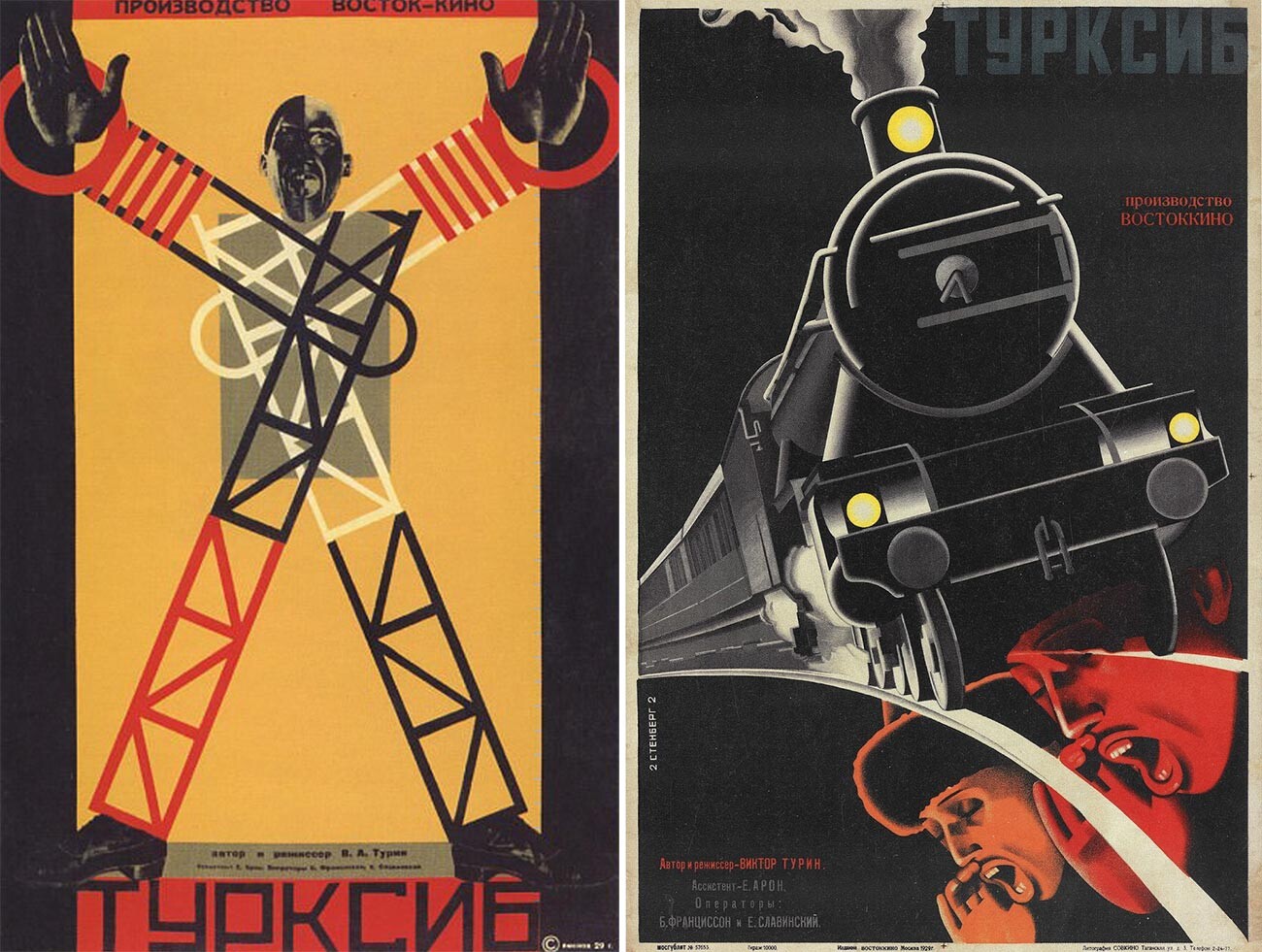 This is a documentary about the construction of the Turkestan–Siberian Railway - known as the Turksib. This was a very important project that was supposed to provide cotton from Central Asia to the Soviet Union. Incredible footage shows how surprising it is to see a train dashing through the desert... 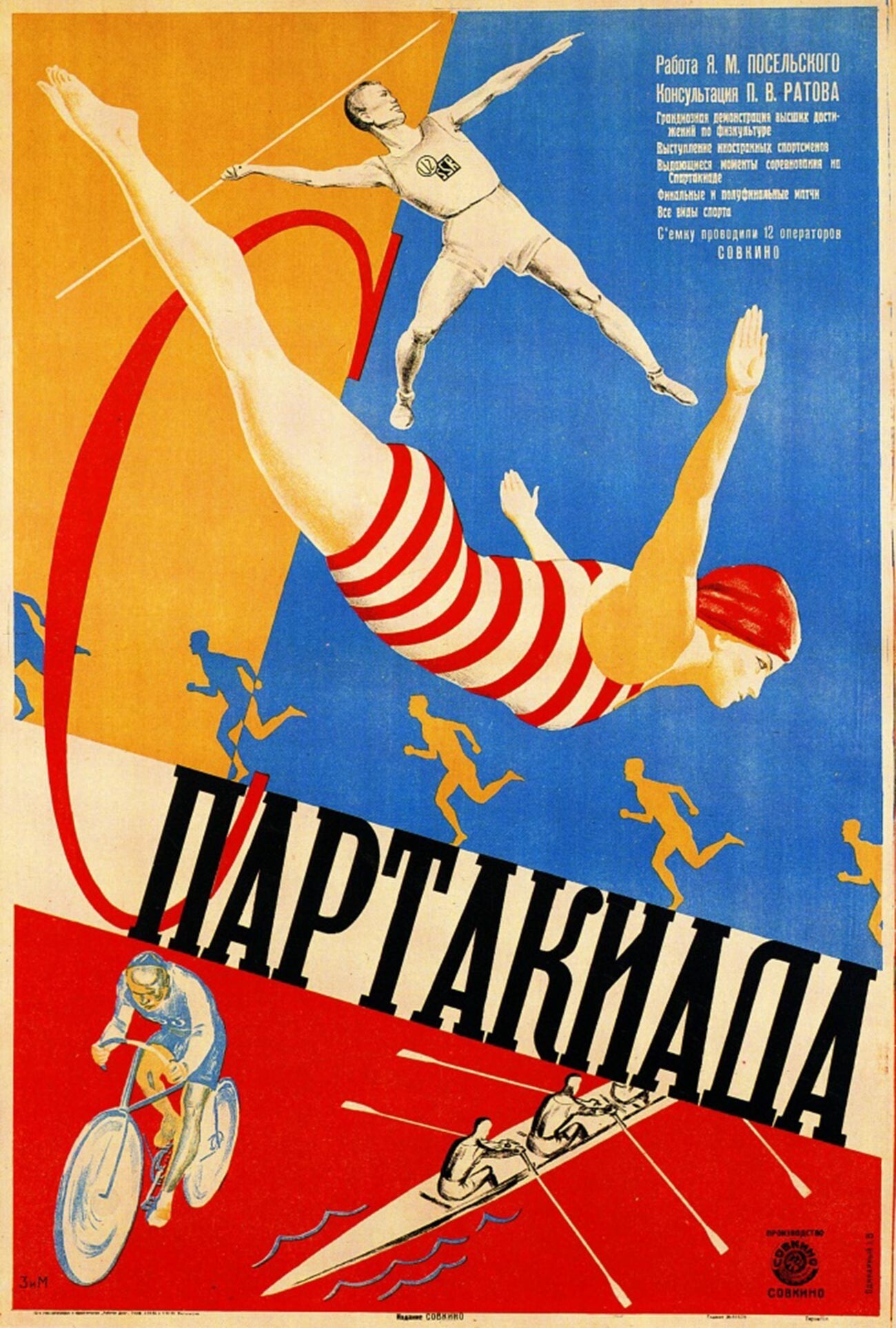 Joseph Poselsky was a true master of Soviet documentaries. His propaganda works praised the Red Army, May Day, Soviet Youth and even metallurgy... The film is an anthem to the Spartakiad, a socialistic sport extravaganza, and a Communist version of the Olympic Games, which the USSR did not take part in, considering it a capitalist event.

READ MORE: What Soviet sport was like under Stalin 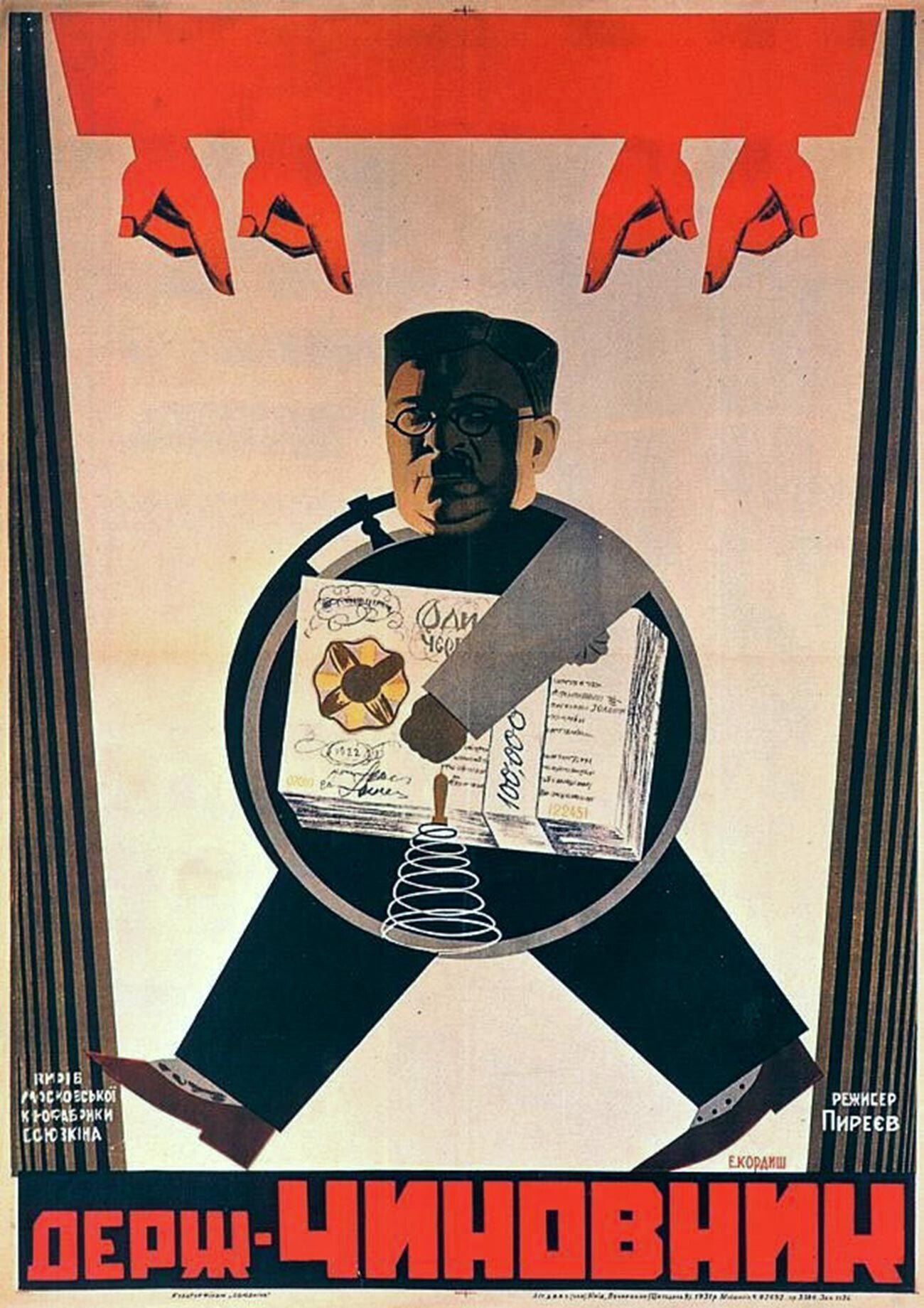 The first version of the movie was banned by censors because it was considered too satirical in its depiction of Soviet bureaucracy. The director reworked the material and turned its focus on "wrecking", "diversionist acts'', and "counter-revolutionary sabotage" - things that mattered to Soviet authorities. 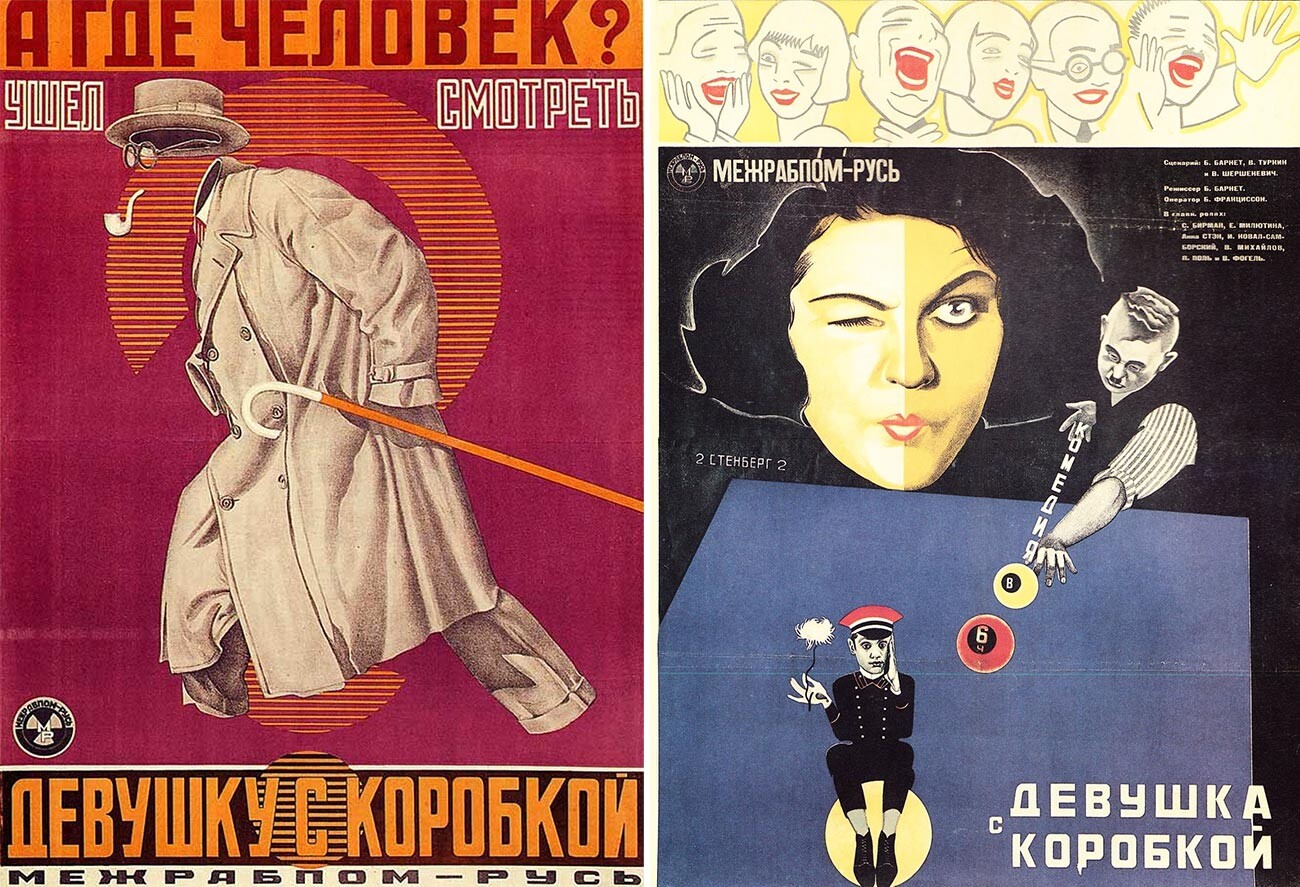 Just before her emigration to the U.S. and a Hollywood career, Anna Sten was the leading actress in Soviet movies, including this one. This comedy is about a young, stylish woman from Moscow who helps a young, provincial student find a place to live in Moscow….. The poster (left) wittily notes: "Where's the man? He left to see The Girl with the Hatbox". 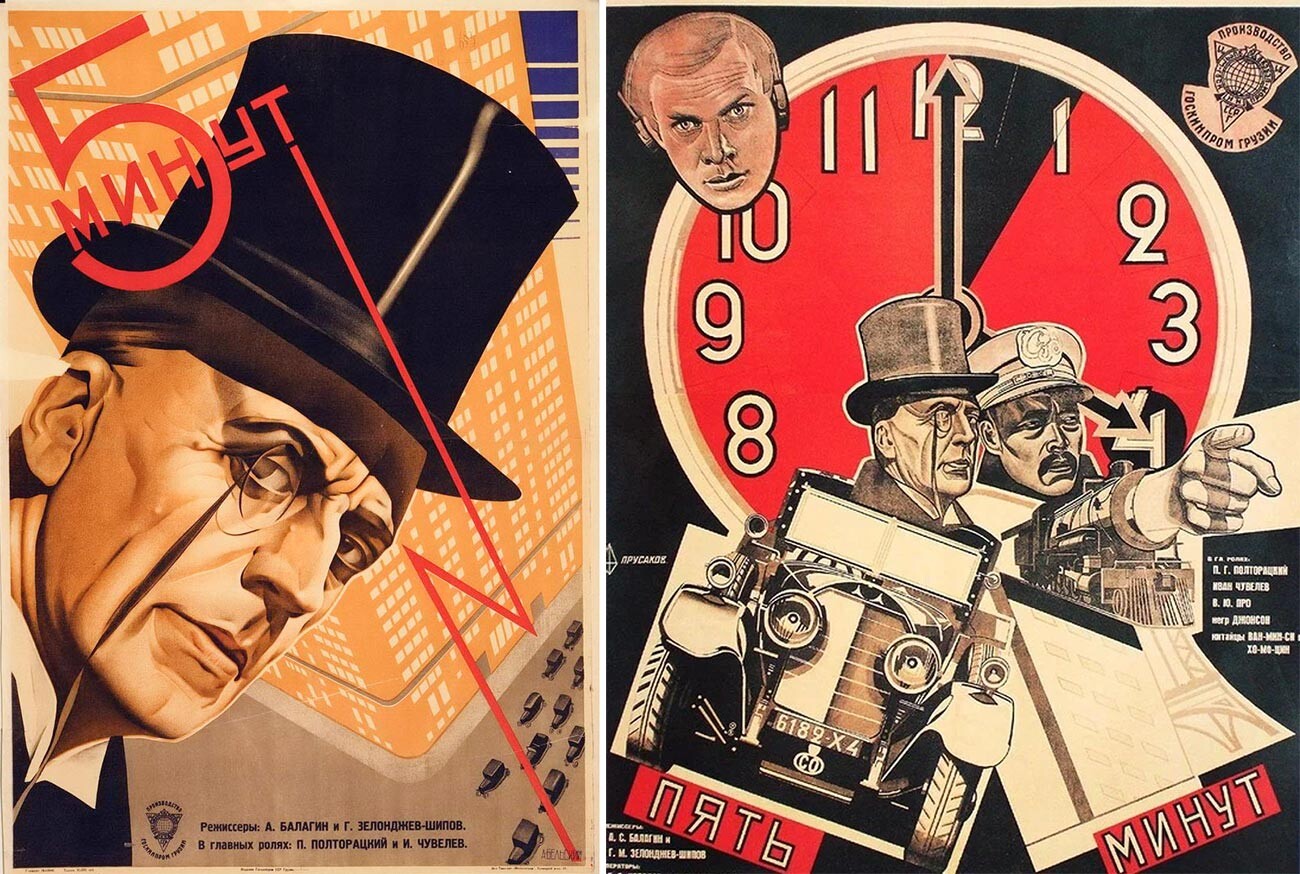 This movie's title is also known as 'Five minutes that shocked the world'. It's about the day Vladimir Lenin died, when all work and production around the world (as the movie imagines) stopped for five minutes. 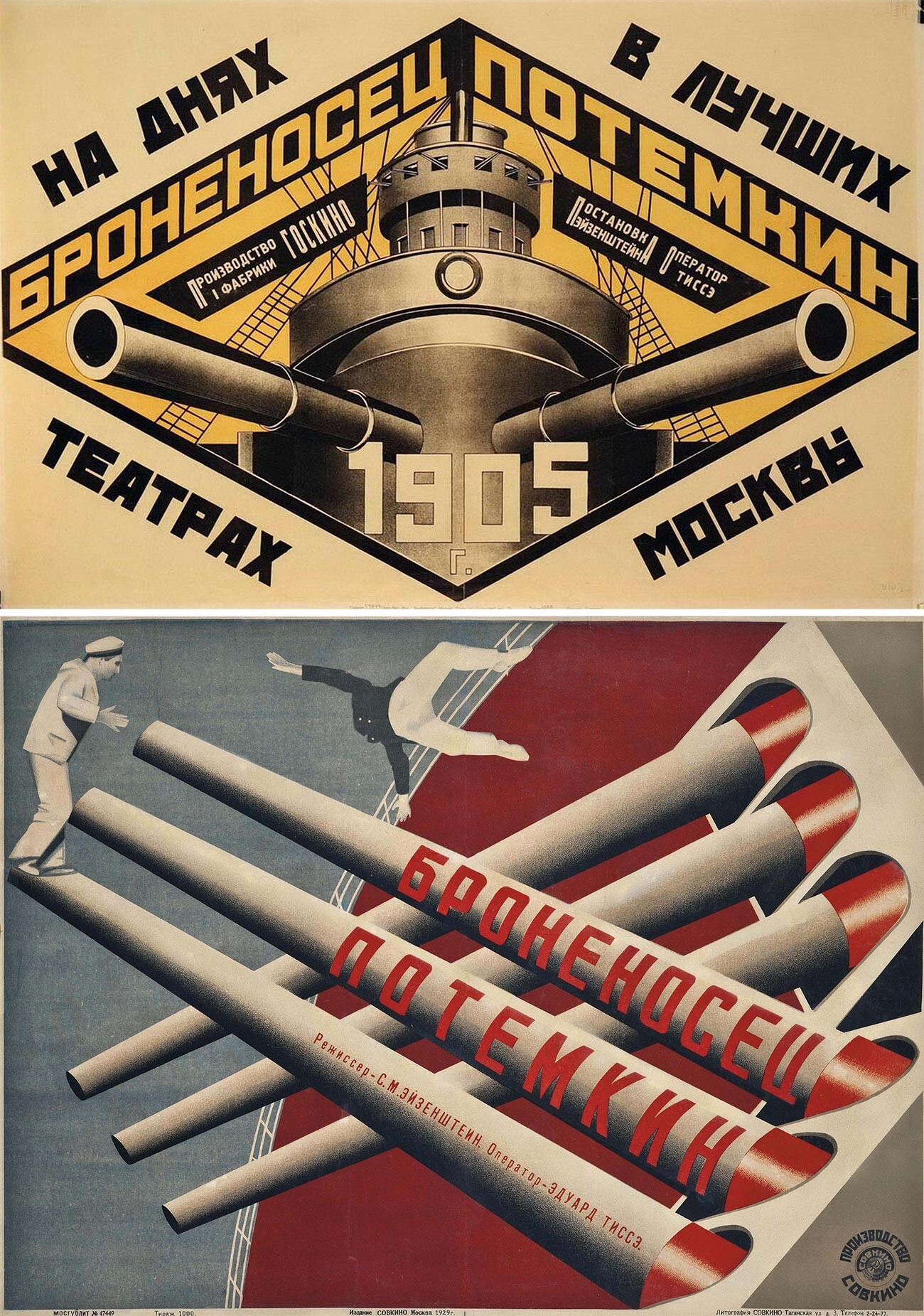 A golden classic of Soviet cinema, to this day it remains feted by cinema critics. Made in 1925, it marks the very first Russian revolution of 1905 and a revolt by the crew of the  Battleship Potemkin. 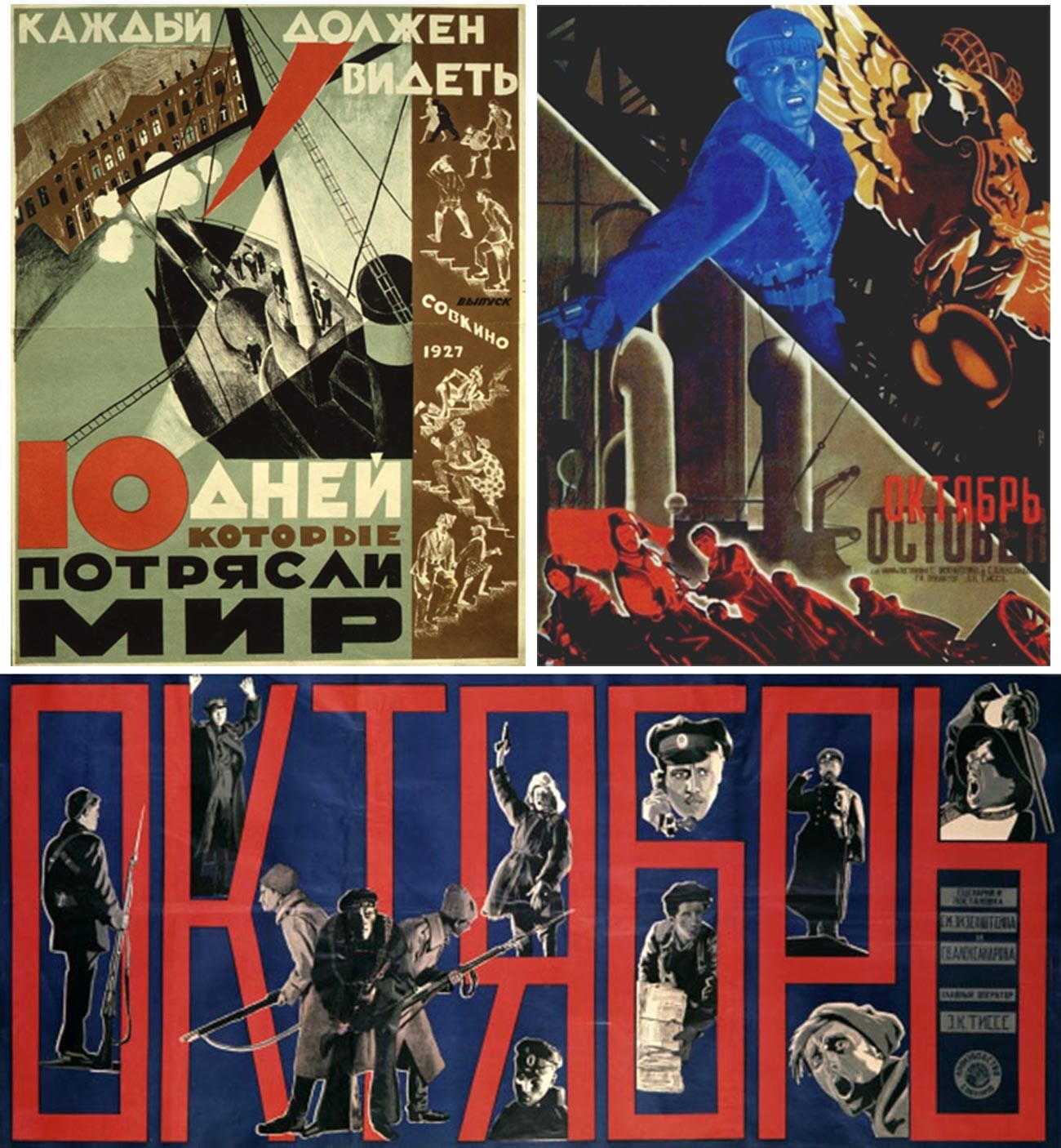 Another timeless masterpiece by Eisenstein is devoted to the events of the Bolshevik Revolution of October 1917. The poster (top left) reads: ‘Ten Days That Shook the World’.