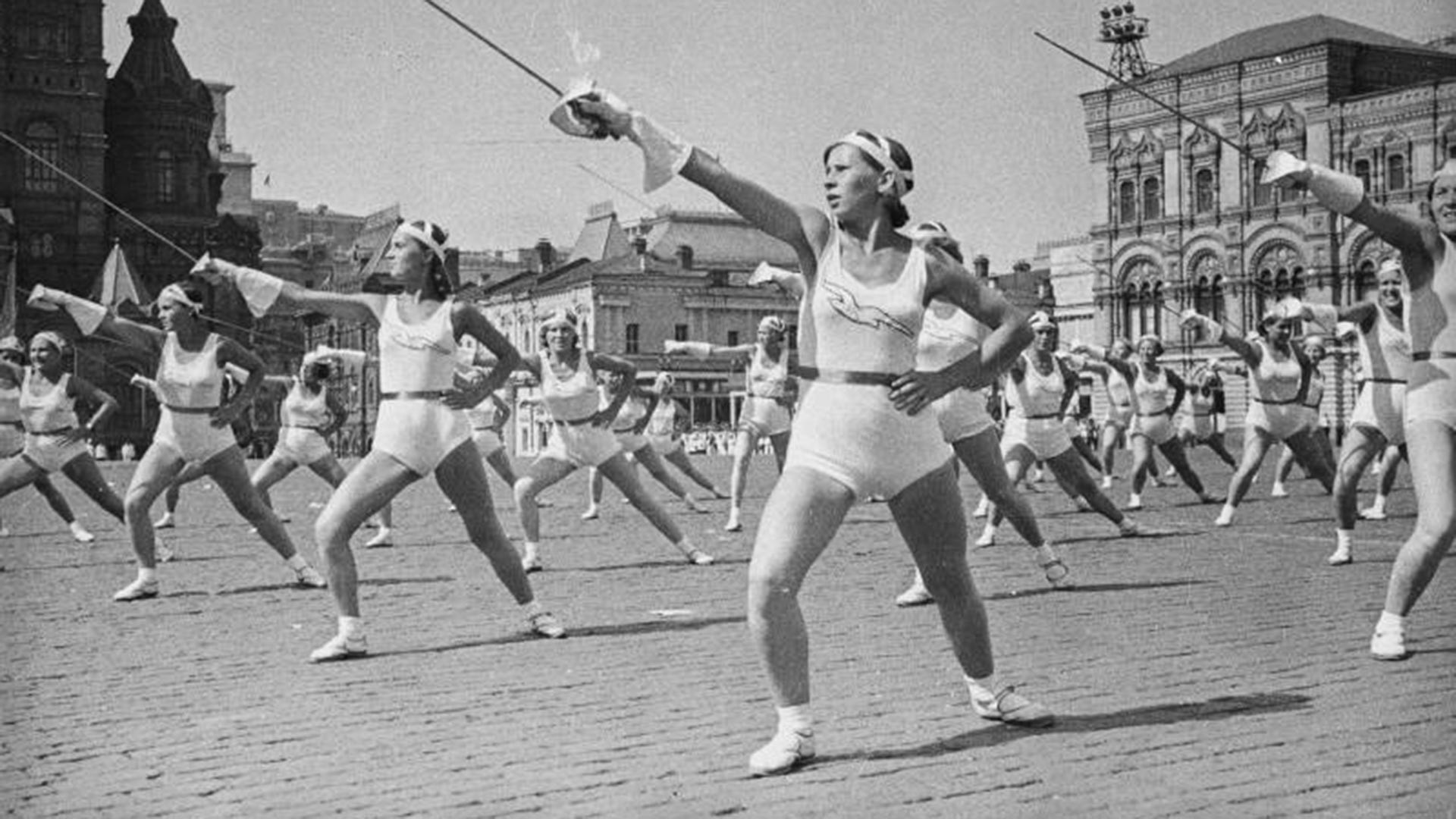 Sergei Vasin/MAMM/MDF/russiainphoto.ru
The mass drive to promote sport and healthy living went hand in hand with the Soviet Union’s effective isolation from all major international competition. Athletes became national heroes, but even many of them got caught up in the purges.

Almost as soon as it came to power, the Soviet government promoted the mass development of sport and physical culture. Workers, soldiers and peasants all had to be fit and healthy in order to build the new country, so sport was encouraged from a very early age. Numerous agitprop posters from the time have survived. “A healthy mind requires a healthy body” was the slogan that reverberated around the country. 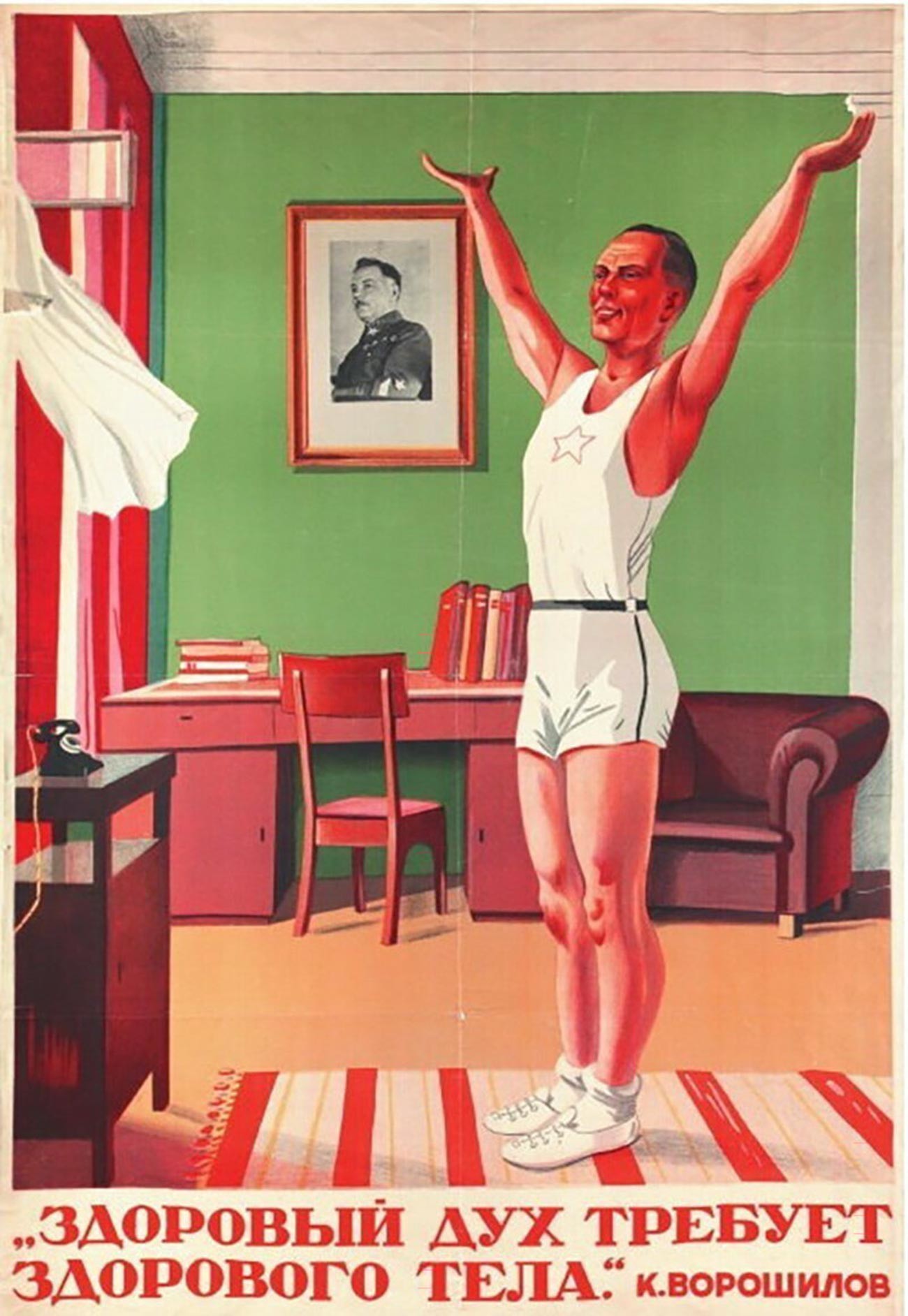 The promotion of sport reached its apogee in the 1930s, when Stalin, party bigwigs and honored foreign guests observed extravagant sporting parades on Red Square from atop the Lenin Mausoleum. These were large-scale processions replete with strength and acrobatic demonstrations, Soviet flags and enormous portraits of Stalin. They blurred the lines between sport and politics to the extreme. 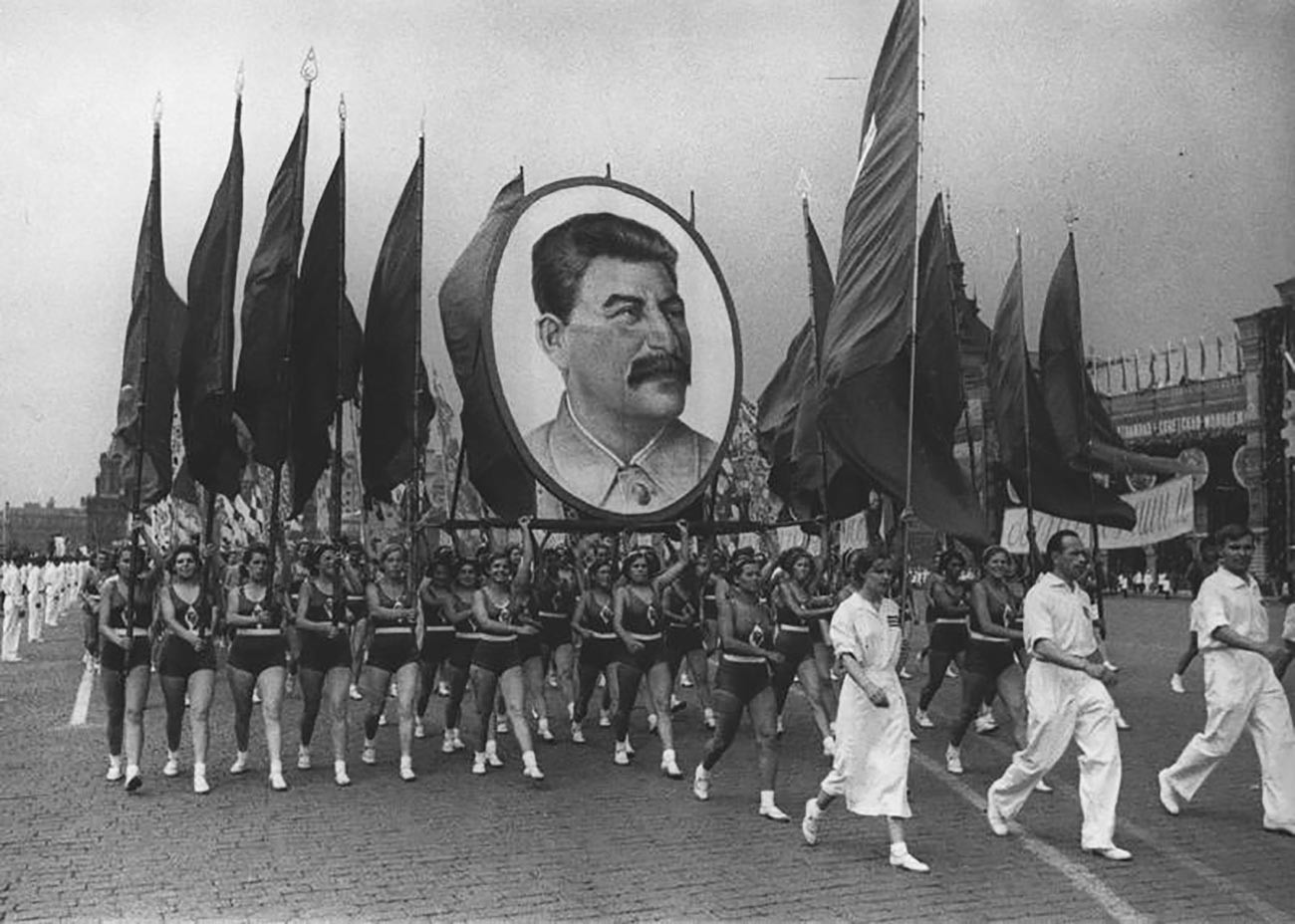 One of the largest was held in 1945, dedicated to Victory in World War II. More than 25,000 athletes from the 16 Union republics took part in the parade.

Soviet sport developed through voluntary sports associations: almost every collective farm, educational institution and enterprise had its own sports teams. Voluntary associations and trade unions worked hard to recruit new members — whereas in 1928 only 53,000 rural residents were members of sports clubs, by 1935 the number topped half a million. 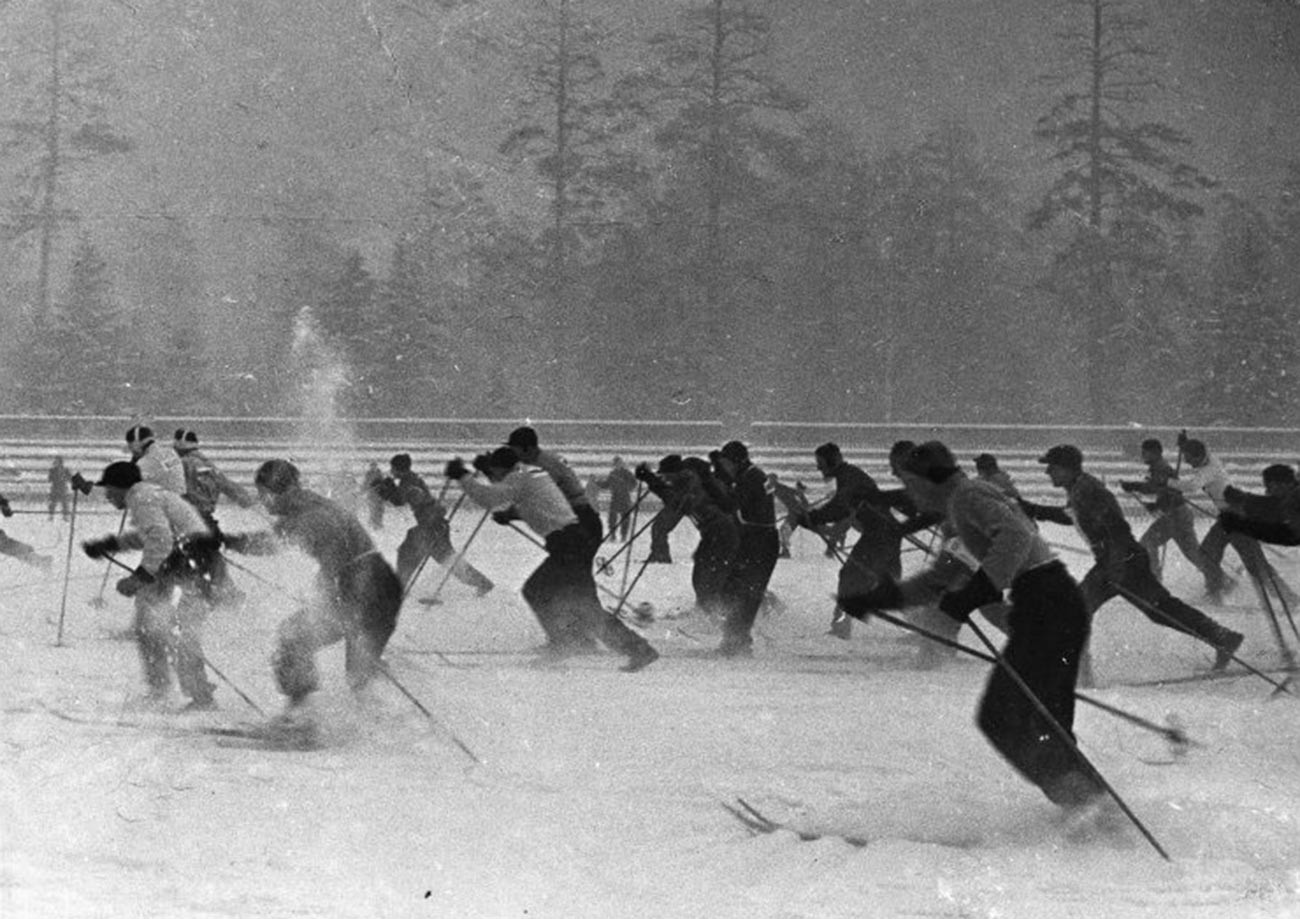 The largest voluntary sports association in the country was Spartak, founded in 1935 by industrial trade unions. Two years after its creation, the association boasted more than 120,000 recreational athletes. Later, the association united workers from every conceivable industry, and by the mid-1950s its membership exceeded 450,000.

In addition, many sports associations were “official” — that is, linked to a ministry or government department. For example, Dynamo was affiliated to the Ministry of Internal Affairs (known under Stalin as the People's Commissariat of Internal Affairs of the NKVD), while CSKA (Central Sports Club of the Army) was for soldiers; both still exist to this day. Sports grounds, stadiums and swimming pools were built for them. In 1928, the largest stadium in the country at that time was built for Dynamo, able to accommodate 25,000 spectators. 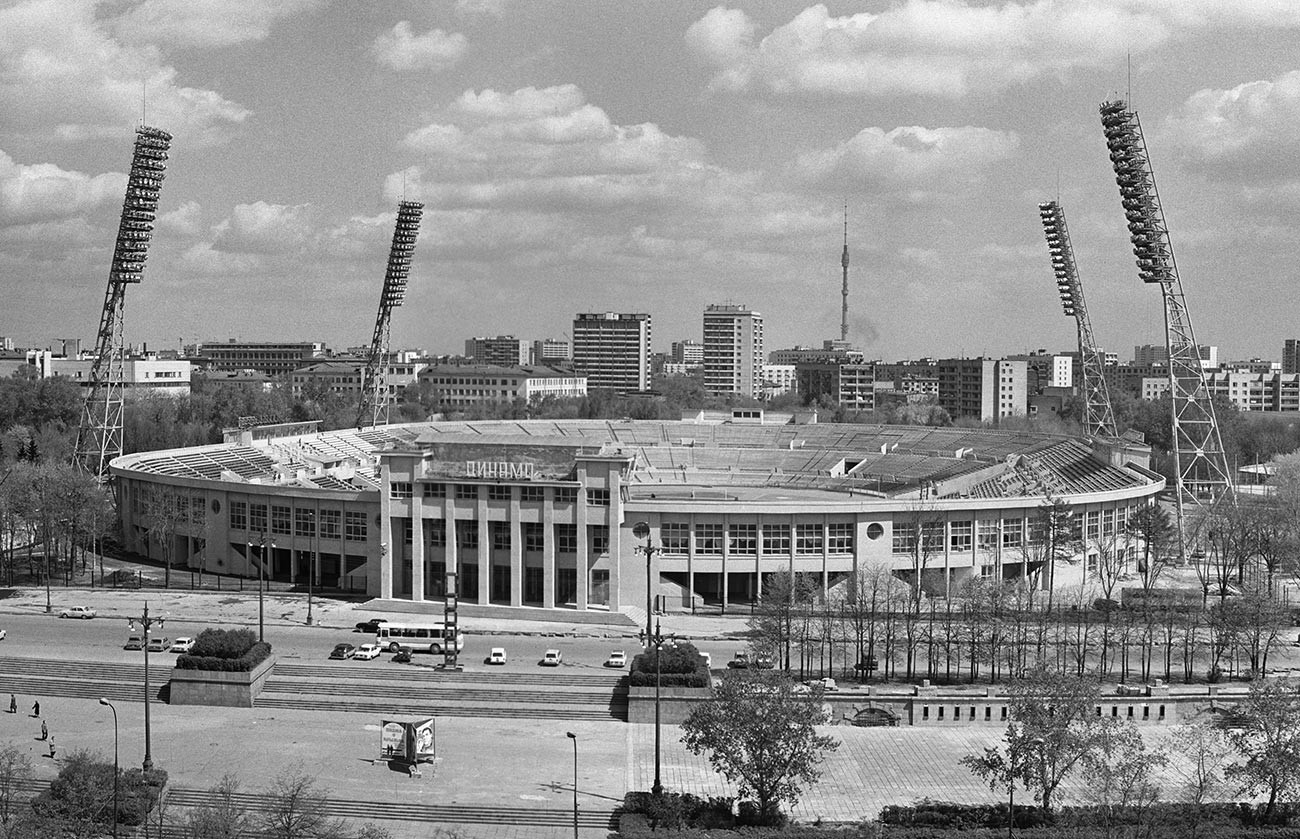 The Air Force also had its own teams; in the Moscow Military District after the war, the Air Force was overseen by none other than Stalin's son Vasily. He actively developed the district’s sports teams, including soccer, hockey and basketball. 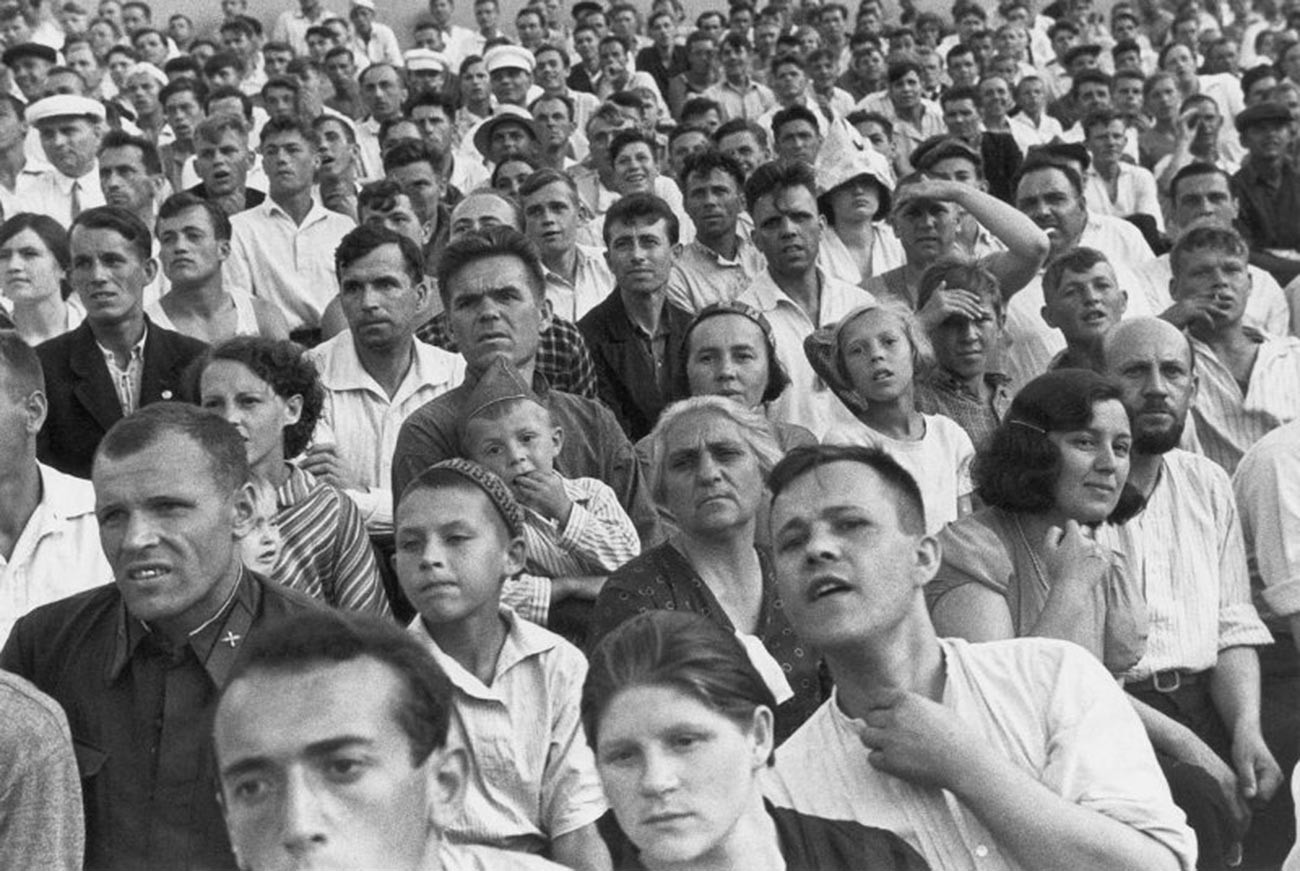 Stalin himself loved soccer: in 1936, specially for him, a match was played right on Red Square, for which a 9,000 square meter artificial surface was laid out on the paving stones (read more here). There are various legends about soccer under Stalin. According to one, during half-time of a 1952 Olympic match, when the Soviet Union was losing to Yugoslavia, Stalin phoned the dressing room, threatening that the Soviet team was not permitted to lose to the "Nazis from Tito's clique"! Fearing for their lives, they managed to draw. 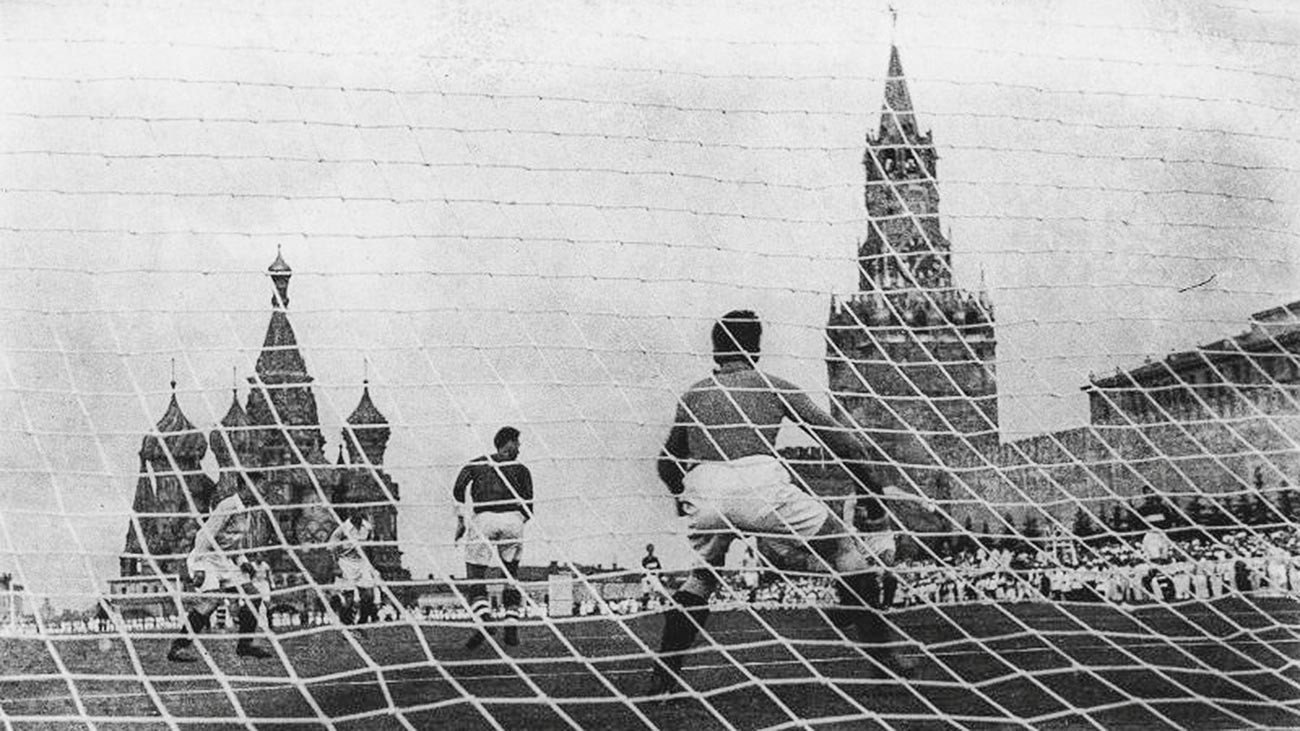 The USSR and the Olympic Games

For many years, the Soviet government had a stormy relationship with the Olympic Games. The first post-revolution Olympics took place in 1920, but the Olympic Committee did not yet recognize Soviet Russia. The next Games, in 1924, were boycotted by the USSR itself — the party refused to participate in this “bourgeois” event. 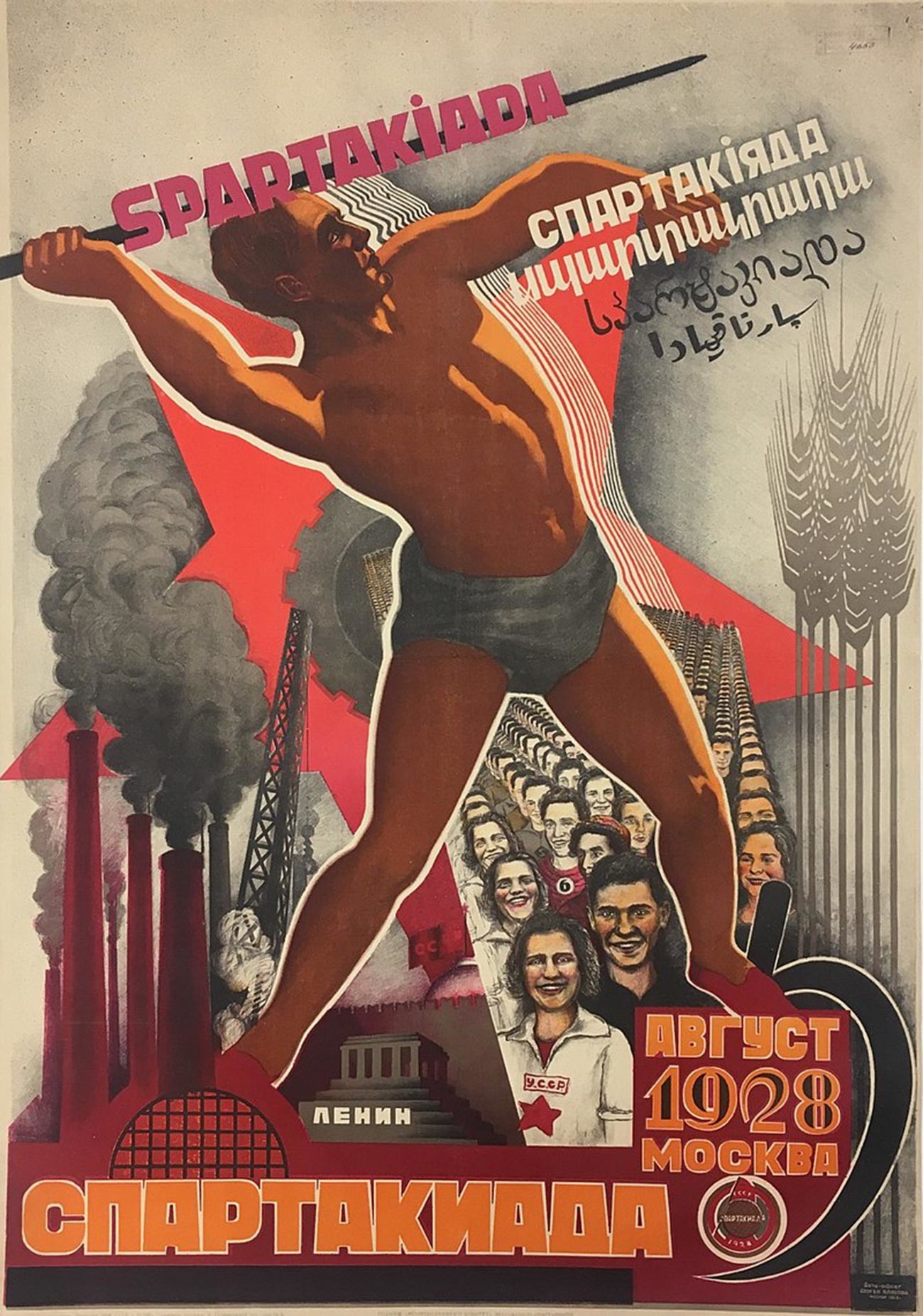 The Soviet Union maintained its hostile attitude until 1952. Then, in the 15th Summer Games in Helsinki, Soviet athletes took part for the first time and finished second by total number of medals won.

Due to the ideological differences, Soviet athletes did not participate in the World and European Championships. Instead, in the 1920s and 30s, the USSR organized its own alternative competition: the Spartakiad, named after Spartacus, the legendary leader of a slave uprising in Ancient Rome. Athletes from countries that had socialist and workers’ organizations were invited to take part. In 1928, for instance, the All-Union Spartakiad was held in Moscow, featuring 7,000 competitors, among them more than 600 from workers' sports organizations from 17 countries, including the US and Germany.

Postage stamps dedicated to the Spartakiad-1935

The USSR did more than boycott Western competitions. As part of the campaign “to combat submissiveness to the West,” the government introduced Russian versions of many sporting terms. For example, the names of many boxing punches were replaced: “uppercut” became udarom snizu (“strike from below”) and “hook” bokovoy udar (“side blow”); in wrestling, the French souplesse (suplex) was renamed brosok progibom (“deflection throw”). 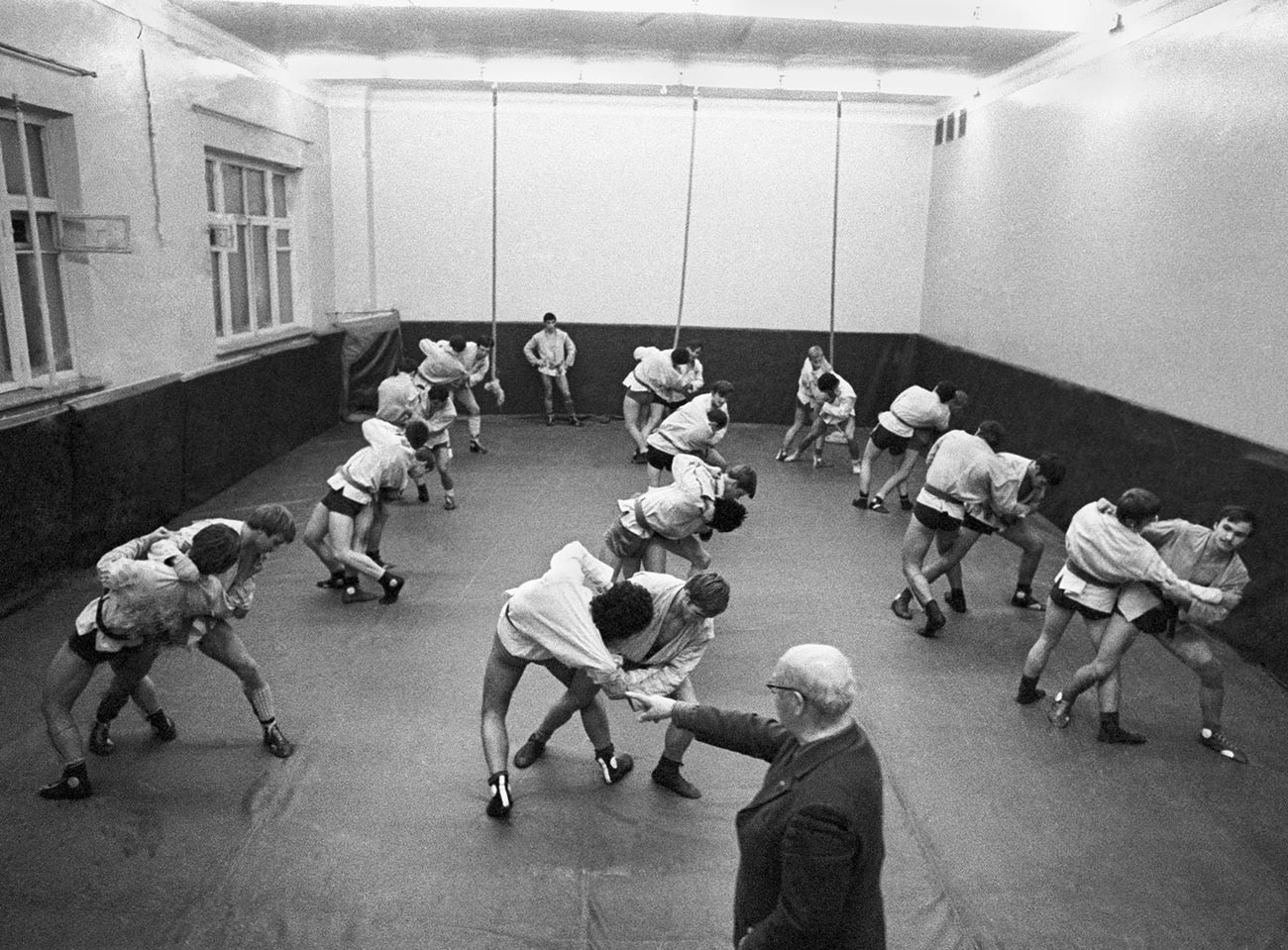 In addition, the USSR invented its own sports. In the 1930s, for example, the Eastern martial arts jujitsu and judo were banned, to be replaced by the “ideologically correct fighting form” sambo (self-defense without weapons). In the 1960s, this sport was even recognized globally and included in a number of competitions.

The USSR also came up with a game based on volleyball: it also involved two teams divided by a net, but instead of volleying the ball, they were allowed to catch it. Because it was played by mostly young pioneers, it was called “pioneerball”.

Despite the mass popularization of sport, many athletes fell foul of the wave of purges in the late 1930s. Those who had attended competitions abroad were especially at risk of being accused of espionage, and highly successful athletes were readily denounced by envious onlookers.

It reached the point of absurdity: for example, the ski club at the State University of Physical Culture, Sport, Youth and Tourism was declared a “terrorist organization” — the student members were arrested, and the leader was shot.

High-jump record holder Nikolai Kovtun was arrested right in the middle of training. He spent more than ten years in the Gulag simply because his parents, even before the Revolution, had worked on the Chinese Eastern Railway in Harbin (in the 1930s, a campaign was launched against former workers on this railway line and their families to “liquidate sabotage, espionage and terrorist elements.”) 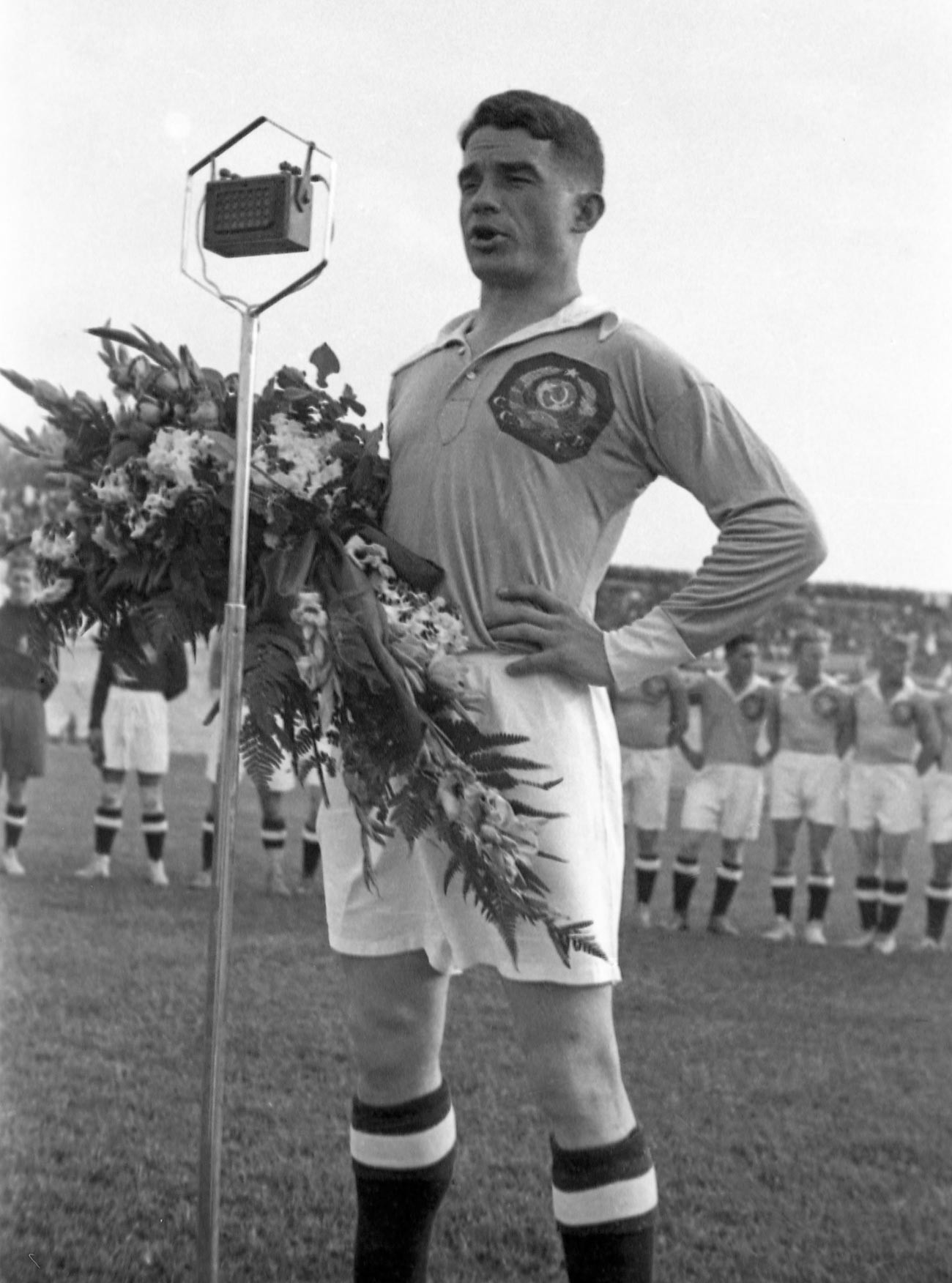 The head of the Spartak sports association of trade unions, Nikolai Starostin, was also denounced and sent to the camps. It is rumored that the real reason behind Starostin’s imprisonment was his soccer team's victory in the 1939 USSR Cup. En route to picking up the trophy, Spartak defeated the above-mentioned Dynamo and — even more dangerously — a club with the telling name “Stalinets”. Sadly, this tale of sporting repression was by no means isolated.