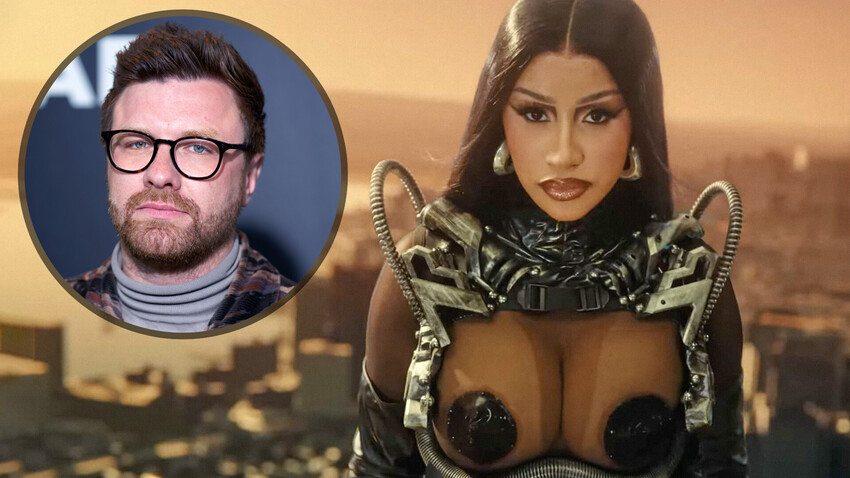 Sylvain Lefevre/Getty Images; Cardi B/Youtube
Lado Kvataniya, a Russian director of Ukrainian-Georgian descent, is behind the video for the Grammy-winning hip-hop artist Cardi B’s ‘Hot Shit’, also starring Kanye West and Lil Durk. Let’s look at some of the other important works of one of the best Russian music video directors.

American rappers Cardi B, Lil Durk, and Kanye West released a music video for the song Hot Shit, which has already amassed more than 10 million views on Cardi B’s YouTube channel. This video was made by a Russian-born Lado Kvataniya; it was his debut project collaborating with foreign artists. Previously, Kvataniya worked with cream-of-the-crop hip-hop artists from the Russian scene: the band Leningrad, rappers Husky, Dolphin, Oxxxymiron, Manizha, Noize MC, and others.

“This experience was akin to a trip to space – I realize that I am one of the very few who were lucky enough to work with artists of this scale,” Kvataniya described his emotions from this collaboration in an interview with Kommersant.

He shared that, until the very last moment, he didn’t know that he would be working with such high-level artists; as for the source material he’d be working with, he listened to it in full for the first time right on the film set. “Before that, for my work, they let me listen to 30 seconds of Hot Shit, described the vibe of the song, and roughly outlined my task,” the director said. Among the ideas for the video, a bold proposition was made to shoot it in Norilsk (one of the most depressing cities of the Russian Far North), but the idea was rejected.

For  Kvataniya, the futuristic music video for Hot Shit is an important commercial project. However, it also stands out from the rest of his works. Prior to working on the video, the director was mostly engaged in auteur projects, distinguished for their post-Soviet aesthetic – like panel blocks and communal apartments in Husky’s music videos, a Soviet movie black-and-white style in 387 by Dolphin, Lenin portraits, roadside diners, and so on.

We re-explore Kvataniya’s most iconic works, which brought him fame and the reputation of being one of the leading music video directors in the country.

Revenge is a soundtrack for the movie Petrov's Flu, directed by Kirill Serebrennikov, which premiered at the 2021 Cannes Film Festival. The music video was made in collaboration with the movie actors and Serebrennikov himself, who appears in the clip as a very tired Santa Claus.

As per the words of Kvataniya himself, this psychedelic alternative New Year’s party is a metaphor for “how we all live, love, and hate each other in a communal apartment.” The music video was shot in a real communal apartment on the outskirts of Saint Petersburg; to Kvataniya’s surprise, there’s still a lot of apartments like this in Russia.

The music video’s idea lies on the surface. It’s a postapocalyptic world where neither money nor any other traditional attributes of success have power anymore. The world awaits its death from giant alien invaders, and all attempts to stop them with a homemade bomb are likely doomed to failure.

Lado Kvataniya deems this 2017 music video the tipping point of his career, “This is the work after which I started receiving even more offers.”

A seductive, sexy woman is under interrogation for a serial murder case; she first seduced, then killed wealthy men for their gold, which she literally feeds on.

Lado Kvataniya made this action music video about a monster in the guise of a woman, hungry for money, in collaboration with Ilya Naishuller (the director of the first-person action movie Hardcore Henry and the Hollywood blockbuster Nobody), who was the video’s producer. Naishuller’s influence is clear: he was definitely responsible for the copious amounts of blood, the brutal murders, and the overall high-quality chaos.

Kvataniya was responsible for, perhaps, the most important music video of the musician and poet Dolphin (Andrey Lysikov). 387’s vibe is that of an old dystopia, with many references to the Soviet era and its most tragic feature– political repressions. The clip (or short film) was declared one of the best music videos of 2018, and a powerful visual statement.

This work is not among Kvataniya’s most famous ones, but, according to him, it’s the most significant. The music video was shot in the rapper Black Seed Oil’s homeland, Kazakhstan. The action takes place in a kebab cafe, somewhere in the middle of the steppe, which serves as a dark metaphor for a purgatory for lost souls – its visitors. It’s as if the song itself becomes some sort of background for a mysterious rite of passage.