The newest saints of the Russian Orthodox Church 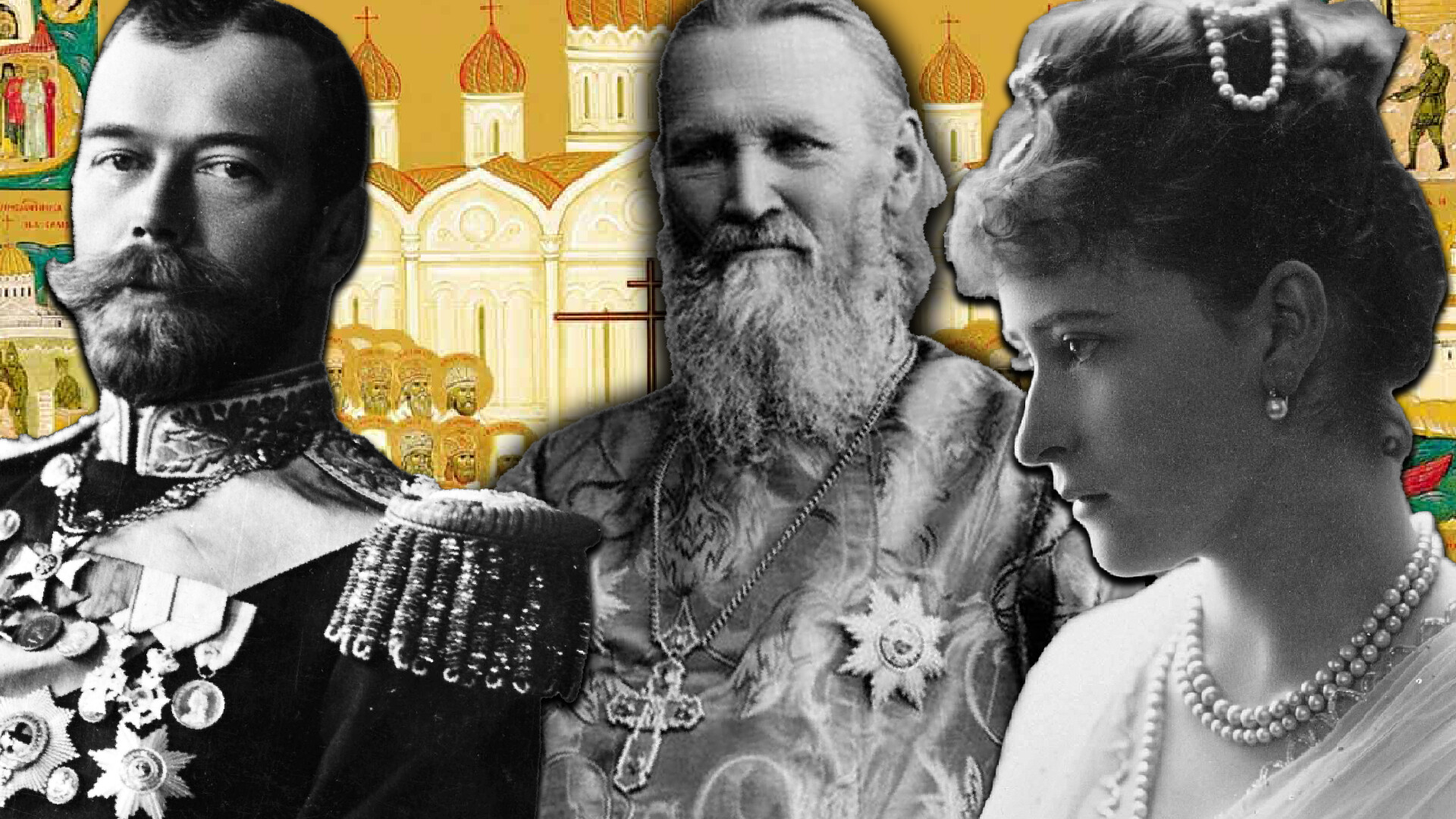 Russia Beyond (A team of iconographers from Saint Tikhon's Orthodox University; Boissonnas & Eggler; Legion Media; H. S. Mendelssohn)
After the collapse of the USSR the resurgent Orthodox Church, among its other actions, canonized new saints. By and large, these were individuals who had suffered for their faith at the hands of the Communists - but not exclusively.

The Soviet Union was notorious for its harsh anti-religious policies. The loosening of control and restoration of interest in religion began with the advent of Perestroika. The Russian Orthodox Church canonized new saints as early as 1988. Surprisingly, there were many from the distant and not so distant past: the medieval prince, Dmitry Donskoy; icon painter Andrei Rublev; Blessed Xenia of St. Petersburg; starets (spiritual father) and monk Ambrose of Optina; and others. This was a very significant step since only 11 people had been canonized in the Orthodox Church during the entire 200-year history of the Russian Empire until its demise. The process had always been long and complicated, and numerous testimonies of performed miracles or the incorruptibility of the relics were a prerequisite. 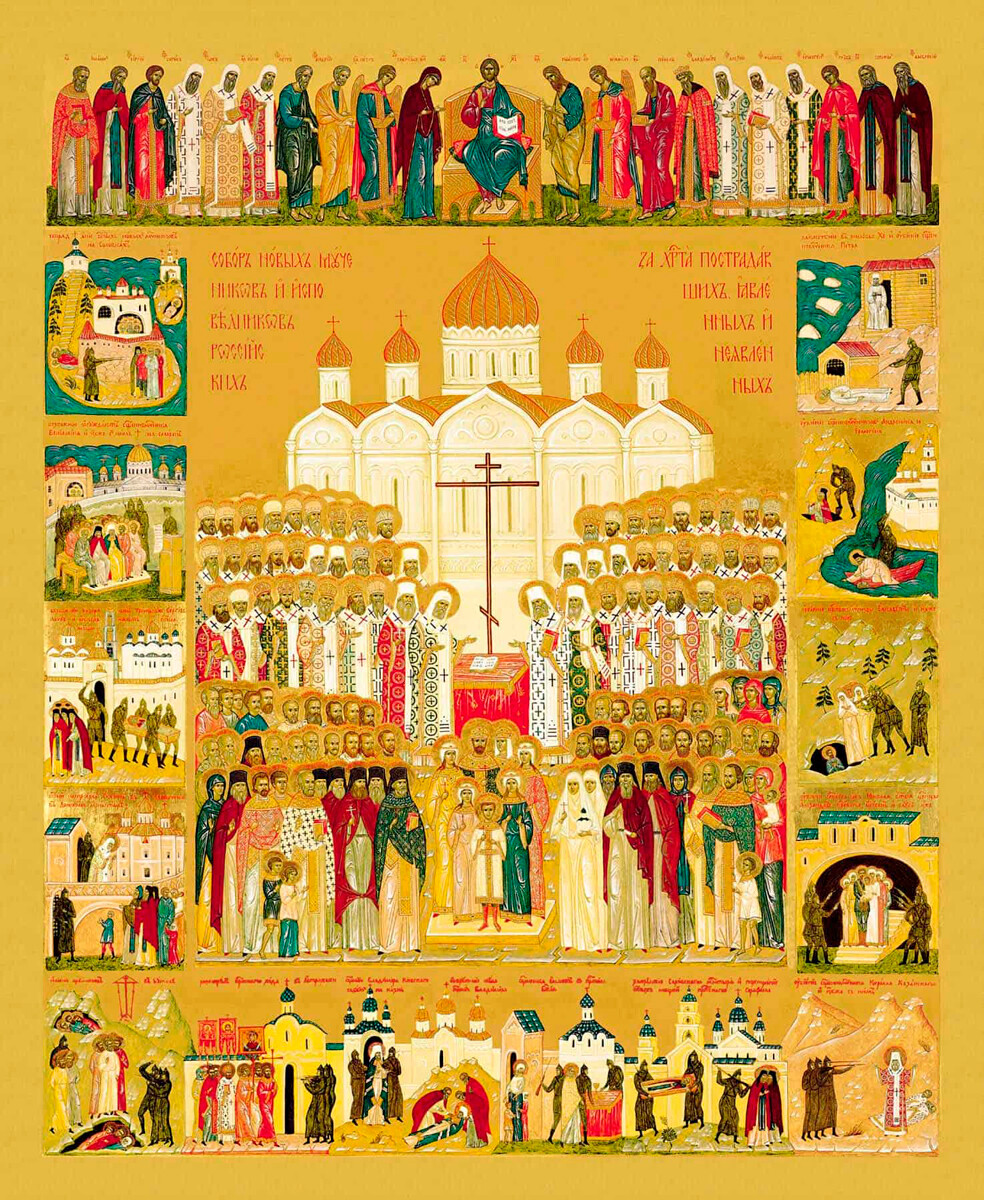 New Martyrs and Confessors of Russia,

A team of iconographers from Saint Tikhon's Orthodox University

After the collapse of the Soviet Union, Russia experienced a true religious revival. Many churches and monasteries were rebuilt, church services began again, and millions of citizens found their faith. At the same time, the process of looking for new saints resumed. Over 1,000 “New Martyrs” and confessors were canonized at the Bishops' Council in 2000 alone. These were primarily people who had suffered at the hands of the Soviet authorities. Here are several of them. 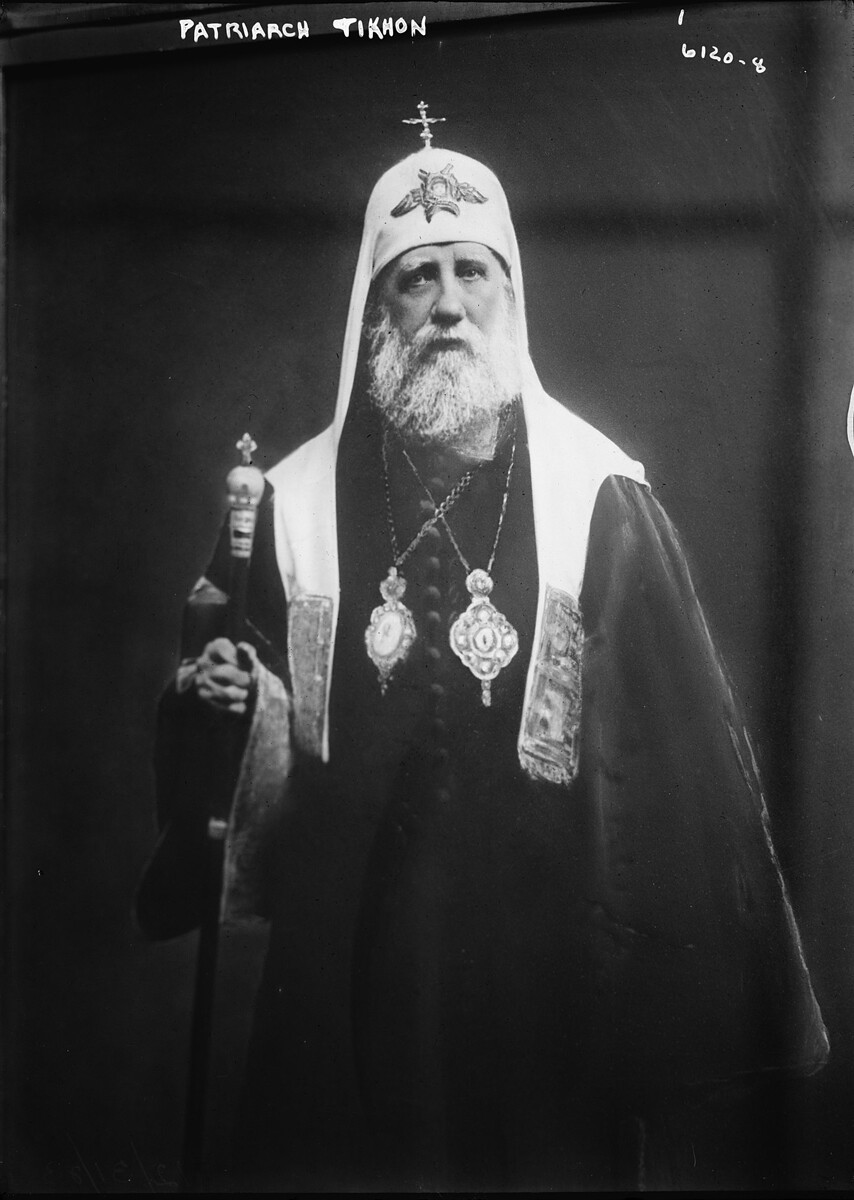 Tikhon was fortunate enough to be Patriarch during the 1917 Revolution. Despite the repression he continued to openly profess his Christian faith and even tried to oppose the Bolsheviks (especially resisting the seizure of Church valuables and urging other priests to follow his example). The Patriarch faced the threat of arrest and execution, but the Bolsheviks didn't dare commit such a deed. Tikhon died in 1925, officially of a heart attack, but there were rumors that he might have been poisoned. By that time the Bolsheviks were holding mass trials of members of the clergy. Tikhon was one of the first saints to be canonized in 1989, and precisely because he had suffered at the hands of the Bolsheviks. Since he didn't suffer martyrdom for Christ, he was canonized as an “Enlightener” for not giving up his faith, for living a saintly life and for his services as a spiritual pastor. 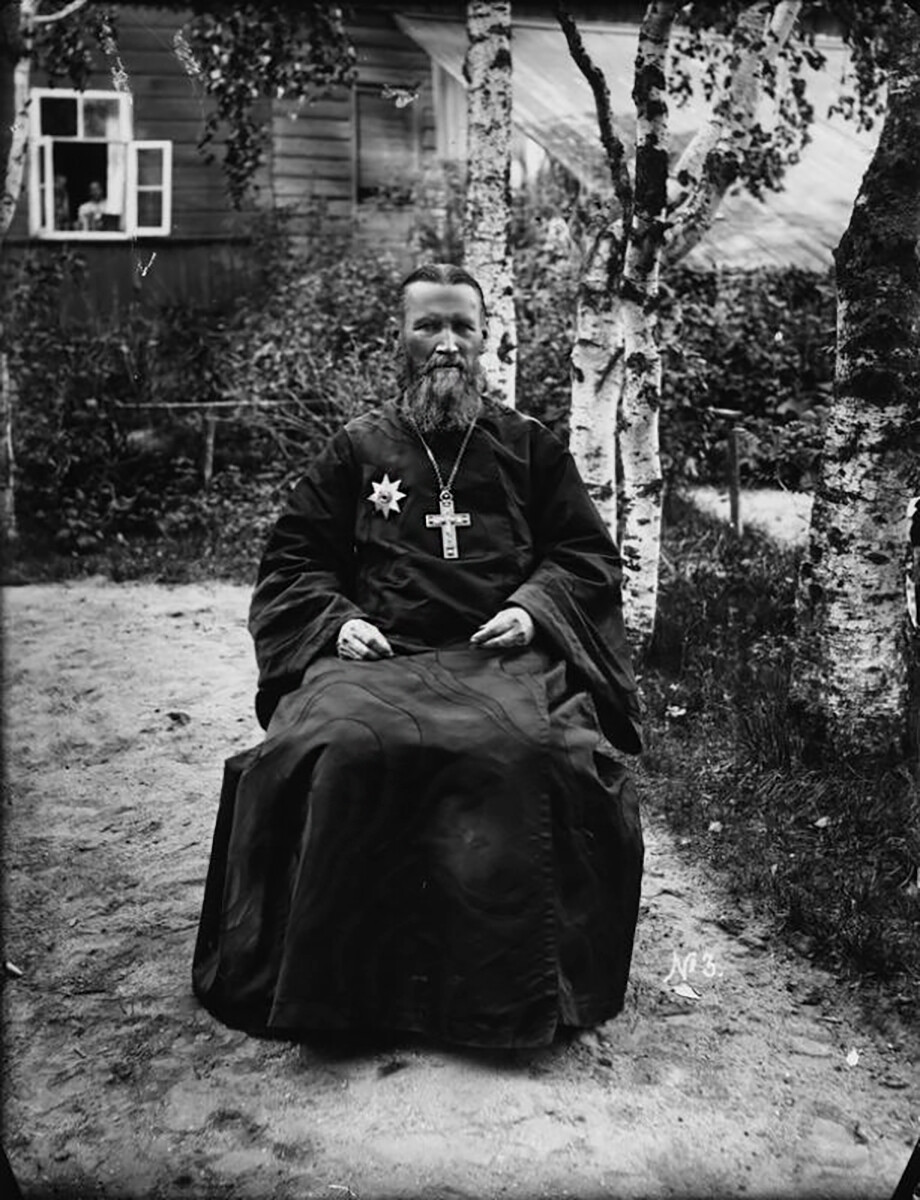 The Russian Orthodox Church Abroad conferred sainthood on John of Kronstadt as early as 1964, but in Russia he was only canonized in 1990. John was an incredibly charismatic religious figure during the final years of Imperial Russia, essentially predicting the inevitability of catastrophe. He was a hero for the poor and hungry, distributing huge sums of alms on a daily basis (both wealthy individuals and ordinary people made donations to him). He was known throughout Russia, went on pilgrimages all over the country, and everywhere he went he was greeted almost as a prophet. Contemporaries testified to his many miracles that he performed during his lifetime, and he was invited to visit Emperor Alexander III as he lay dying, whom he nevertheless wasn’t able to heal. At the same time he was a personal opponent and critic of Leo Tolstoy.

You can read more about John of Kronstadt here. 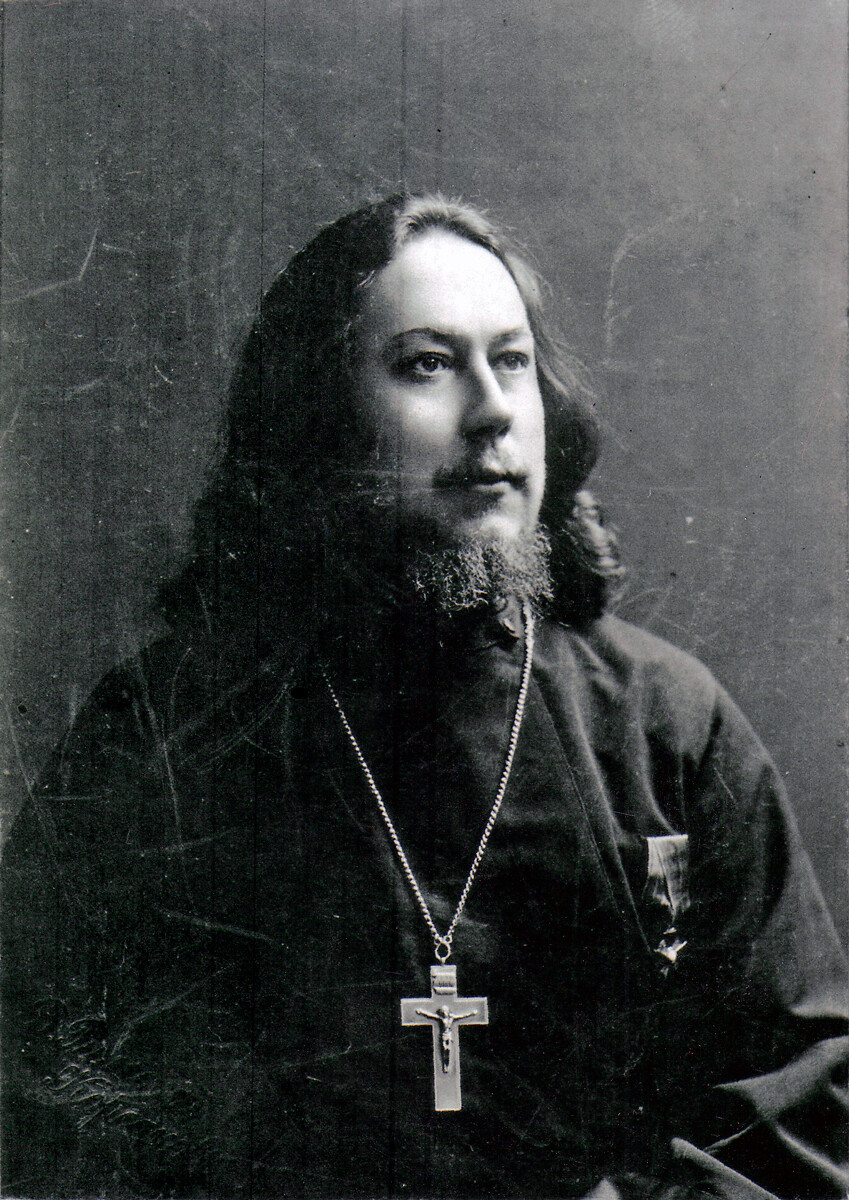 Canonized in 1994, Ivan is regarded as the first “New Martyr of Russia” - in other words, one of the first to have died for Christ in Russia. Kochurov has an impressive life story: For many years he served in the Orthodox Church in the U.S. - in the diocese of the Aleutian Islands and Alaska. During a visit to Russia he collected money for the construction of the Holy Trinity Cathedral in Chicago (Nicholas II himself donated a sizable sum). Ioann returned to the Russian Empire in 1907, and from 1916 he was a priest at St. Catherine's Cathedral in Tsarskoye Selo (where the Emperor was then living with his family). After the Revolution, Red Army soldiers attacked Tsarskoye Selo, but Ioann continued to officiate at church services, openly supporting pro-monarch Cossacks and also called on people to oppose the Soviets. Sources differ on the circumstances of his death, but it was a violent one at the hands of Red Army soldiers.

You can read more about how the Soviet authorities clamped down on the church here.

The New Martyrs of Butovo 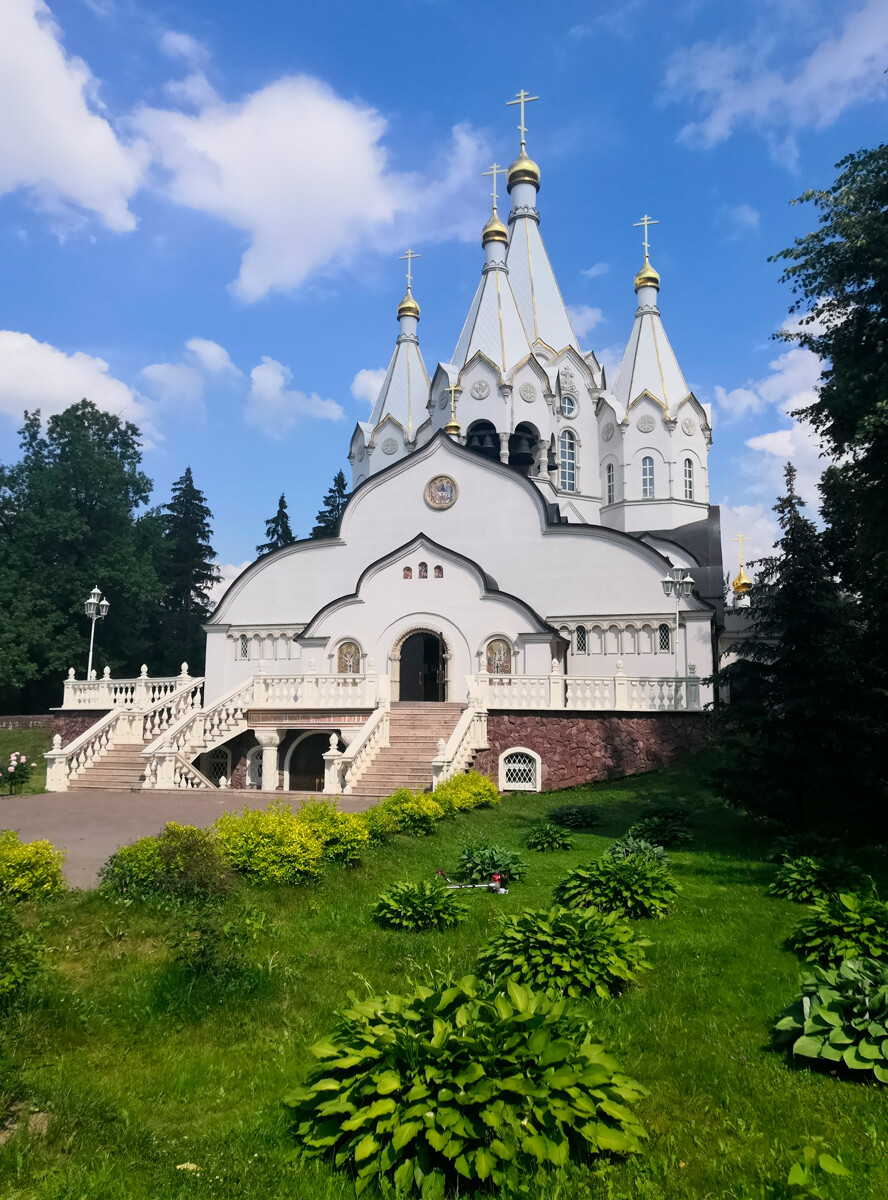 Church of New Martyrs and Confessors in Butovo

The “Butovo firing range” is an infamous place of mass execution. More than 20,000 people were shot at this site near Moscow in 1937-38 - and over 1,000 were members of the clergy of various religious denominations. Many were accused of anti-Soviet plots and propagating prohibited religious teachings. Patriarch Alexy II described what happened there as a “Russian Golgotha” - and in 2003 he gave his blessing to the commemoration of the New Martyrs of Butovo, or, in other words, those who had accepted a martyr's death for Christ at the Butovo range. The list of murdered Orthodox priests amounts to 325, all of whom are known by name. There is now a church near the place of execution that’s dedicated to the New Martyrs of Butovo. 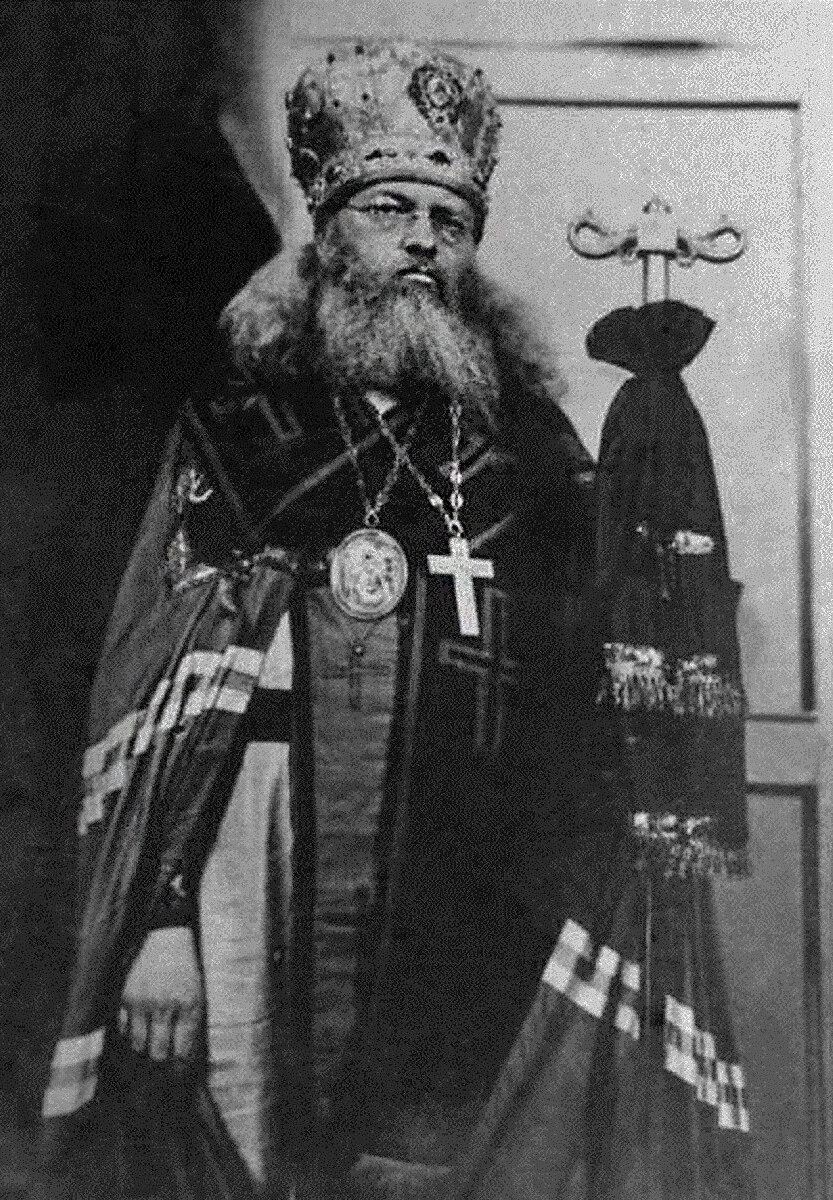 This saint has a remarkable life. In the Soviet era, Luke not only managed to continue serving in the church, but he attained the rank of archbishop. He was also a practicing surgeon, the founder of purulent surgery and a scientist of considerable standing. He spent long years in various prisons and places of exile, but survived and even received the Stalin Prize for his medical work. His biographers can find no other explanation than his importance as a doctor, something that even the Soviet leadership understood. Luke died in 1961 of natural causes at the ripe old age of 84. And in 2000 he was canonized as a holy confessor of the Orthodox Church.

You can read more about the life of Luke here.

Nicholas II and his family 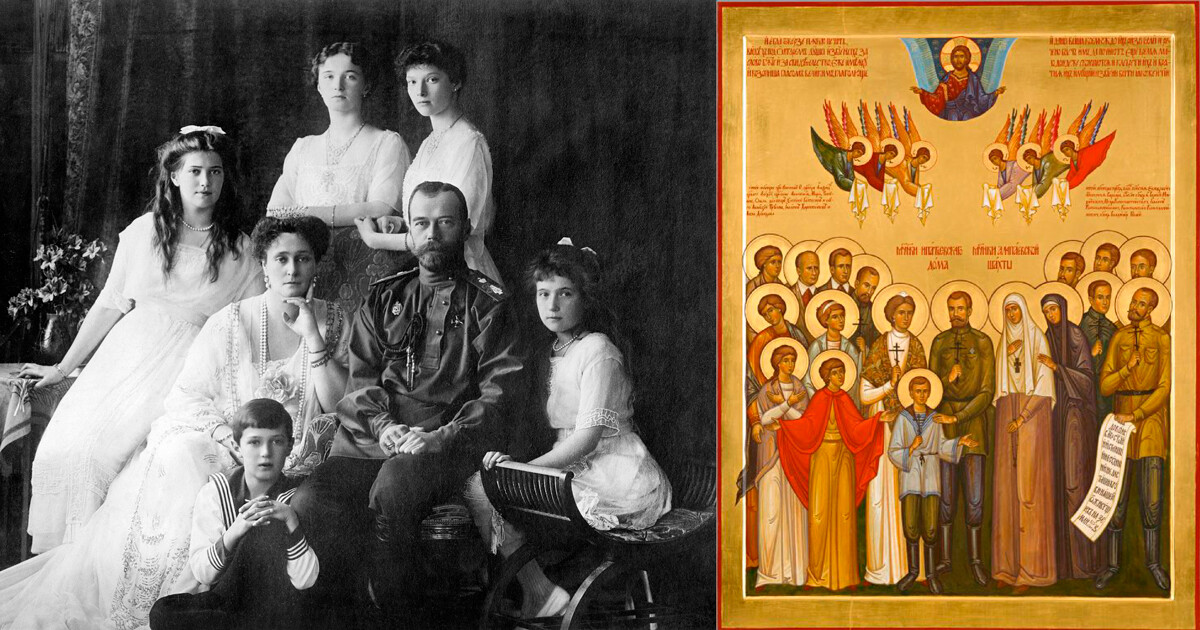 Nicholas II and his family; Icon of the Royal Martyrs

Library of Congress; Iconographer Anton Yarzombek / The Church of the Holy Trinity in Khokhla

The canonization of the last Tsar, who was brutally murdered along with his family by the Bolsheviks in 1918, sparked the biggest arguments and debates inside the Church and in society at large. (The Russian Orthodox Church Abroad conferred sainthood on the Emperor in 1981). Throughout the 1990s, a special  canonization commission examined the arguments of both supporters and opponents of canonization. Eventually, in 2000, Emperor Nicholas II, Empress Alexandra, Tsarevich Alexei and the grand duchesses Olga, Tatiana, Maria and Anastasia were canonized as "passion bearers".

You can read more on the complicated saga of the canonization of the Imperial family here. 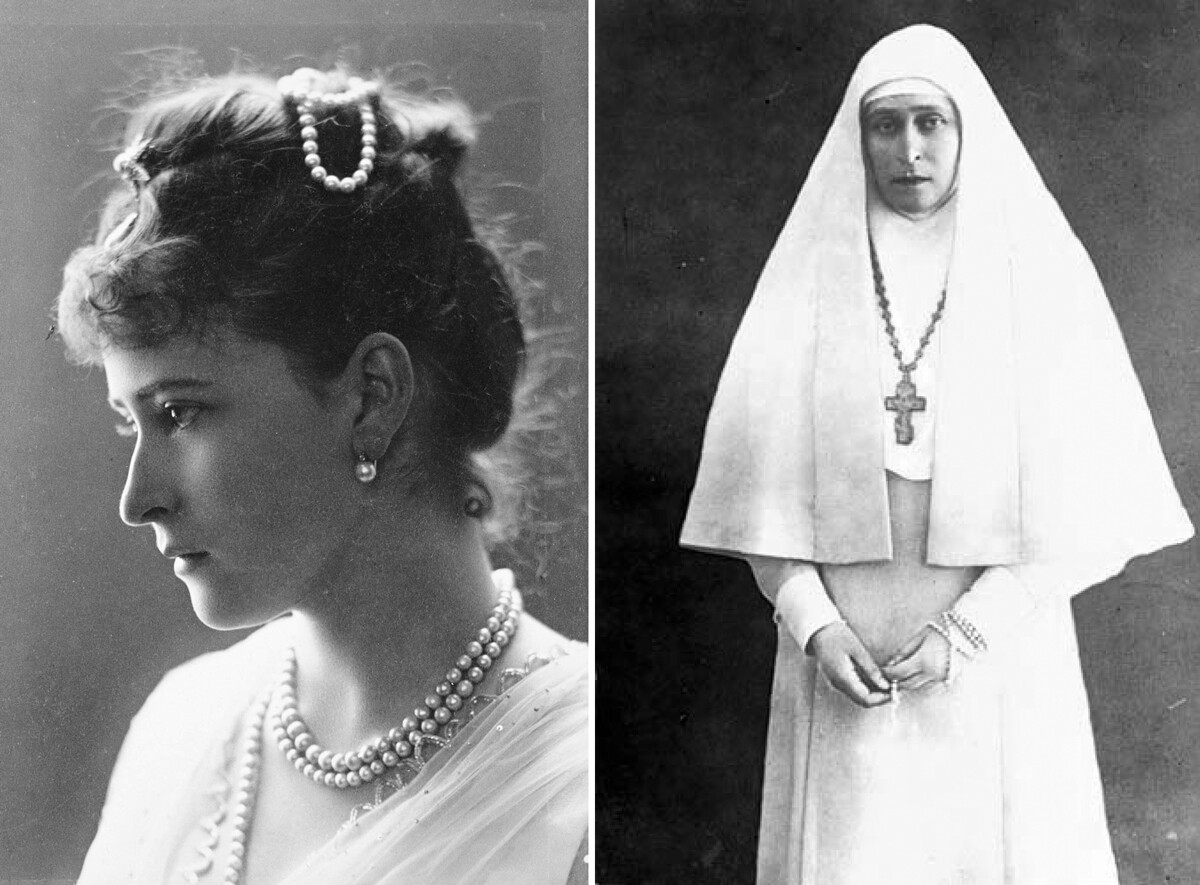 The day after the Imperial family were shot, several members of the House of Romanov were thrown down a mine shaft alive not far from Ekaterinburg, and hand grenades were tossed in after them. They lived for another few days and, according to eyewitnesses, they could be heard groaning in pain from their injuries and reciting prayers. They included Grand Duchess Elizabeth Feodorovna. Legend has it that when her body was found, her hands lay on her breast making a sign of the cross. The Russian Orthodox Church Abroad conferred sainthood on all the “Alapaevsk martyrs”, while the Moscow Patriarchate in 1992 only canonized Elizabeth Feodorovna and her attendant, Nun Barbara, as martyrs.

Elizabeth was not just a martyr - her saintly life was devoted to the church and to good works. In the family, everyone called her Ella, and she was the elder sister of the last Empress, Alexandra. She married Nicholas II’s uncle, Grand Duke Sergei Alexandrovich. In 1905, as governor-general of Moscow, he was assassinated by a terrorist’s bomb. After her husband’s death, Elizabeth replaced him as chairman of the Imperial Orthodox Palestine Society. In addition, she founded the Convent of Saints Martha and Mary in Moscow.

You can read more about Elizabeth here.

Gestapo photos of Alexander Schmorell, taken after his capture on February 24, 1943

One of the most unusual figures on our list is an anti-Fascist saint. Alexander Schmorell was born in Orenburg in 1917, but at a young age he moved to Germany with his father, a Russified German. The boy regularly attended Orthodox Church services. When the Nazis came to power, Alexander adopted openly anti-Fascist views, but he was forced to go and serve in the army and swear allegiance to Hitler. During the war, he secretly gave medical assistance to Soviet soldiers. Learning of the mass murders of Jews, Schmorell and his friends founded the anti-Fascist organization, The White Rose, and distributed leaflets. In 1943, the 25-year-old Alexander Schmorell was arrested and, after torture, sentenced to die by guillotine.

The Russian Orthodox Church Abroad canonized Alexander in 1994, and the Moscow Patriarchate recognized him as a saint in 2012, whereupon he became a martyred saint.