How the Bolsheviks tried to destroy the Russian Orthodox Church 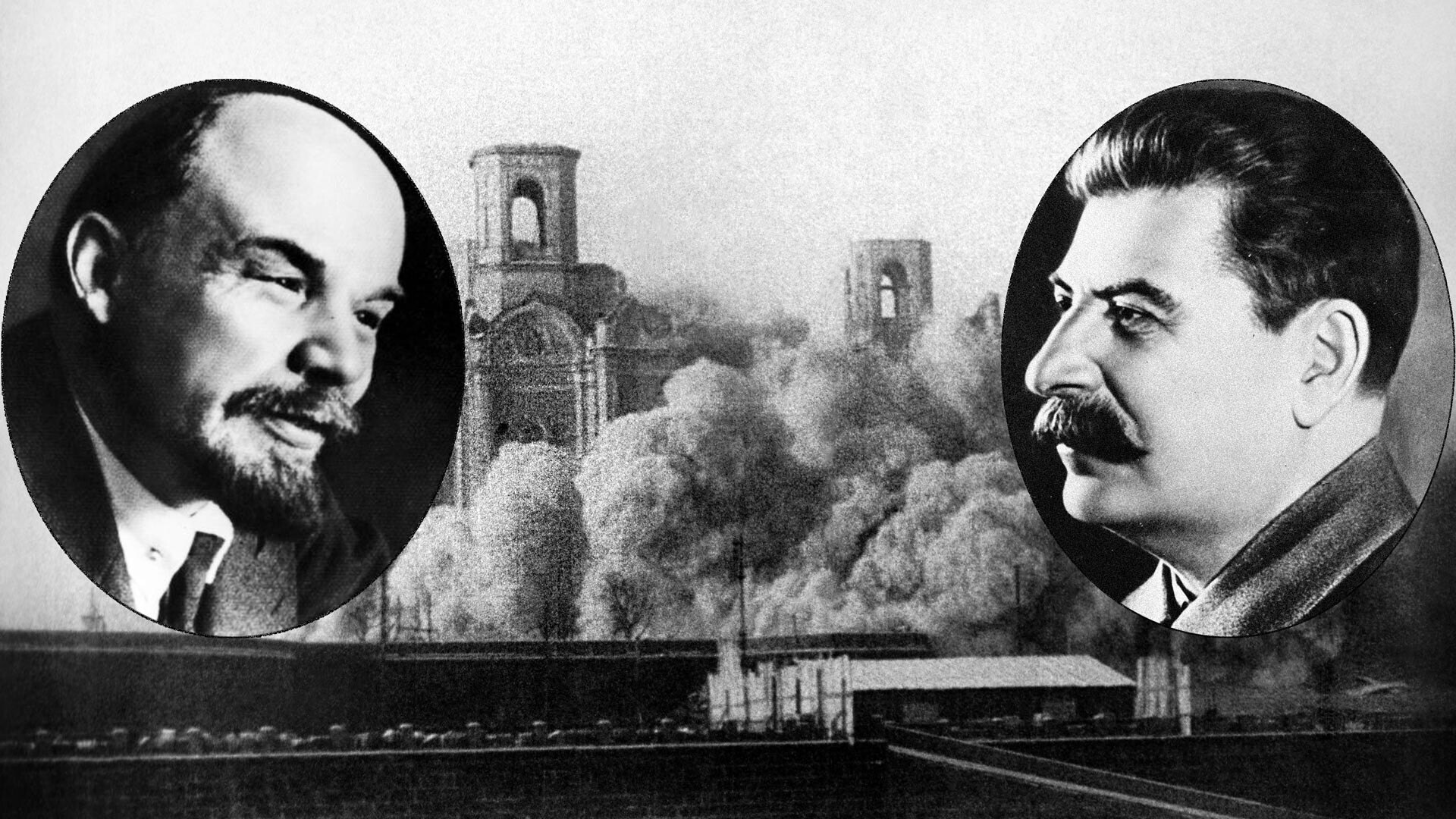 Russia Beyond (TASS; Public Domain)
Religion and the Orthodox Church in particular were serious obstacles for the creation of the new Soviet man. That’s why the Bolsheviks declared war on the “opiate of the masses.”

Even before the Bolsheviks had fully established power over the entire country, they set about eliminating everything that belonged to the “old regime.” The priesthood and traditions of the Russian Orthodox Church were perceived by the new regime as part and parcel of the old system of values. In fact, the Bolsheviks wanted to destroy the people’s old religious dependence in order to create a new one: faith in communism and its leaders.

Opiate of the masses

The Church was an important part of life in Imperial Russia. It was in charge of birth and death statistics, the institution of marriage, and maintaining the parishioners' morals. In many ways  the Church had transformed from a guardian of spiritual life into a rigid bureaucratic institution integral to the functioning of the state system. 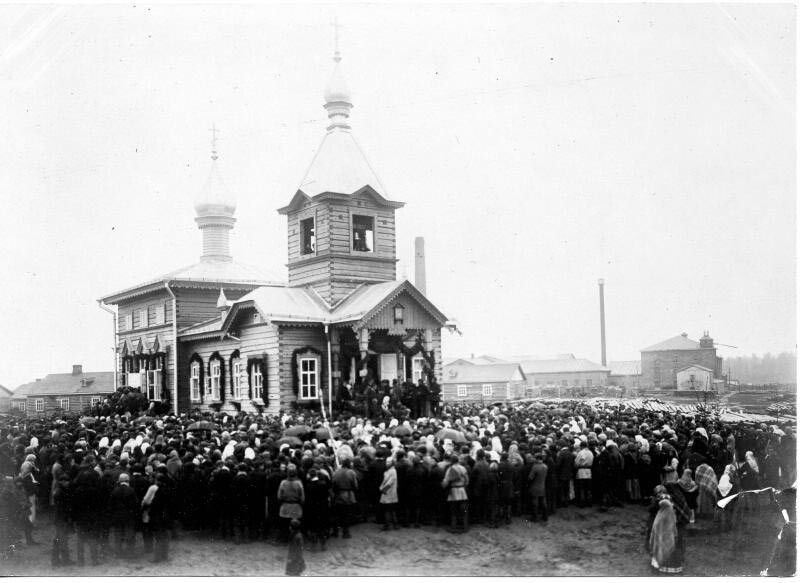 Parish gathers for a service, 1900s

However, for the peasantry (at the beginning of the 20th century 85% of the peasants were illiterate) the Church remained the only source of understanding about the world. At church services priests read the Bible and explained its meaning to the peasants. They also talked about the various events and realities of life, saying for example that monarchy is a form of human rule established by God, and that everyone should know his place and not seek to change it.

The Bolsheviks were especially furious at the fact that the Orthodox Church called to endure suffering in this world, promising a faithful Christian a reward in “the other world.” The Bolsheviks considered this a lie, which kept masses in misery and poverty, while others benefited from their labor and lived in idleness and wealth.

“Religion is the opiate of the masses,” wrote Karl Marx, who inspired the Bolsheviks. The leader of the Russian Revolution, Vladimir Lenin, repeated this in his writings. The phrase became one of the Bolsheviks' main slogans. Lenin wrote that it is the helpless position of the oppressed class and its inability to resist the “exploiters” that generates faith in a better afterlife. Religion offers them “a cheap justification for their entire exploited existence.” 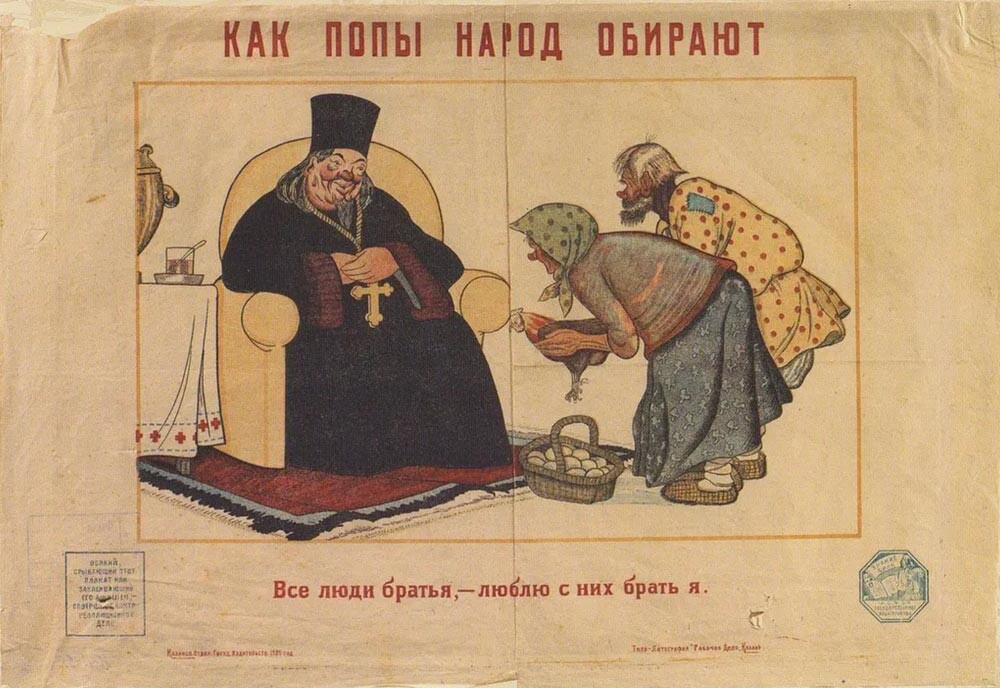 Bolshevik propaganda quickly began to take aim at the “popes,” as they derogatorily called priests. Soviet posters caricatured the clergy as fat and horribly disgusting creatures in robes and beards who befuddled the people.

Next, the Bolsheviks quickly moved forward from propaganda to action. The bloody war on the Church didn't distinguish who was a true believer and spiritual mentor, and who merely was a nominal adherent. Ivan Kochurov, a priest of the Catherine the Great Cathedral in Tsarskoye Selo, is considered the first victim of the Bolsheviks. He was murdered in 1917 when the Red Army stormed into the Imperial summer palace. 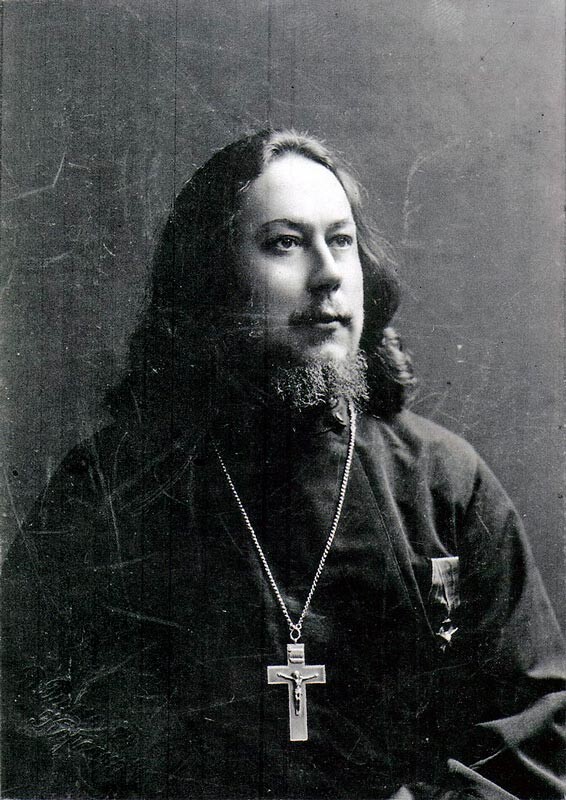 In 1918, the Bolsheviks issued the decree “On Separation of Church from State and School from Church.” The Church lands were nationalized, while marriage and family relations were taken out of the Church’s purview. In 1918-20, the Bolsheviks launched a massive anti-religious campaign and initiated a blasphemous desecration of shrines, opening the graves of Russian saints in order to dispel the belief that their remains wouldn’t decay. Photos with the desecrated shrines were actively used in propaganda, and thus the Bolsheviks hoped to bring an end to their veneration. 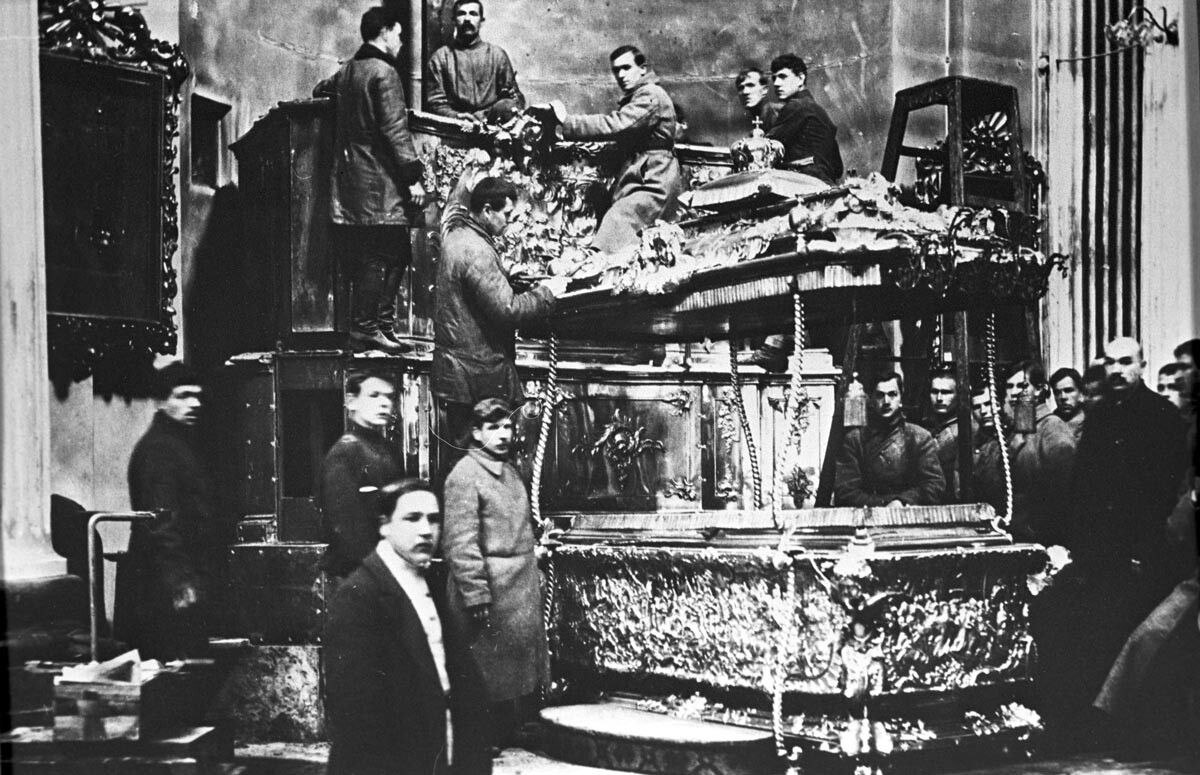 The Bolsheviks opening the Alexander Nevsky's shrine on May 12, 1922

In 1922, the authorities went ahead and initiated a campaign to confiscate valuables from churches under the pretext of fighting a mass famine and restoring the economy that was destroyed after the Civil War. Church items made of precious metals, icon frames, jewelry crosses, and other things that might contain gold, silver, or gems were plundered from across the country and taken to a specially created government storage. Many of these items were later sold to the West. 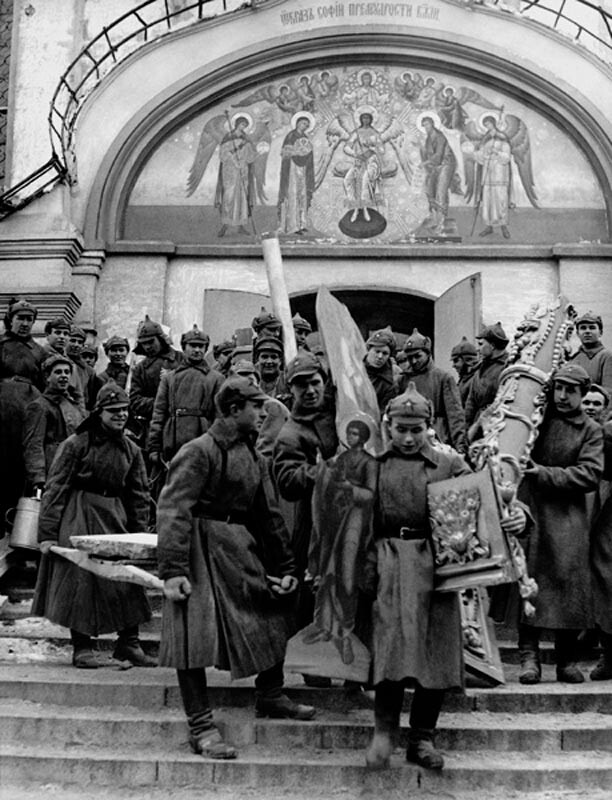 Red Army soldiers take out icons and church items from the Simonov Monastery, 1923

Priests often resisted the barbaric looting of churches, and the Chekists arrested many, accusing them of counterrevolution and anti-Soviet propaganda. They were tortured and repressed. More than a thousand priests suffered in the early 1920s, including the bishops of Moscow and Petrograd. 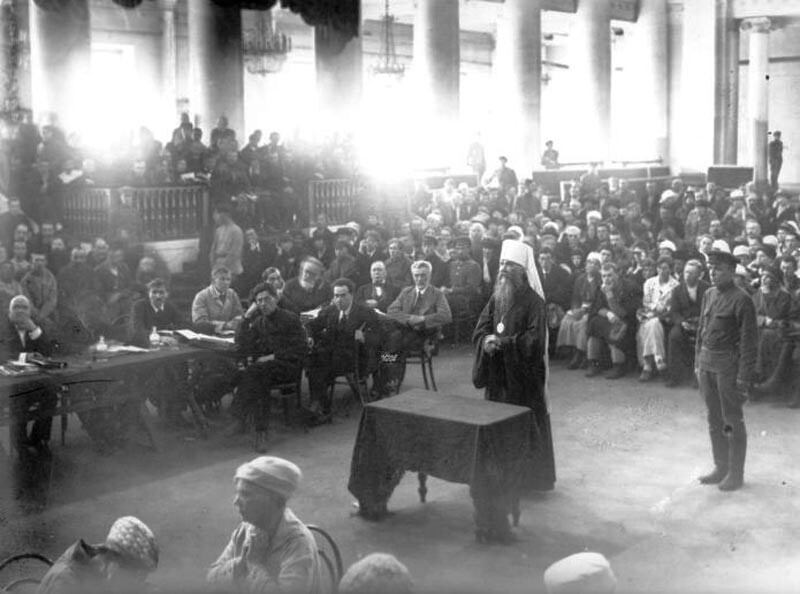 One of the most infamous cases happened in the town of Shuya in the Ivanovo Region: the parishioners of the Resurrection Cathedral resisted the confiscation of the church’s sacred items and valuables, and the Red Army soldiers opened fire on a crowd of worshippers. Several people were killed, and local priests were later arrested and executed.

Some clergy left the country after the Imperial regime fell, but many stayed and continued to conduct services. Moreover, on the eve of the Bolshevik Revolution, in the summer of 1917, a large church council convened in Moscow, and restored the institute of the Patriarchate, which had been abolished by Peter the Great more than 200 years prior. The newly elected Patriarch Tikhon was a very respectful man and had great influence. When the Civil War broke out, he condemned those who were shedding blood and urged them to stop killing. 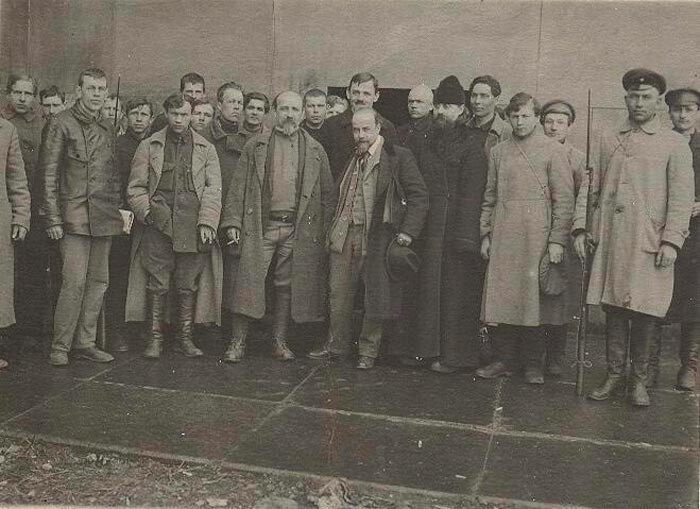 Members of the Commission for the Seizure of Church Properties and Bishop Ditonius, 1922

In 1922, Tikhon was arrested and probably would have been executed like many other priests. However, he was soon released (some historians think the West was involved), and a confession published on his behalf said that he was allegedly under the pernicious influence of anti-Soviet elements, and that he was “no longer an enemy of Soviet power.”

As part of their struggle against the Church hierarchy, the Bolsheviks initiated a split in Russian Orthodoxy. As a result, the ‘Renovationist’ priests loyal to the Bolsheviks opposed the Patriarch and eventually removed him from his position, essentially beheading the Church. 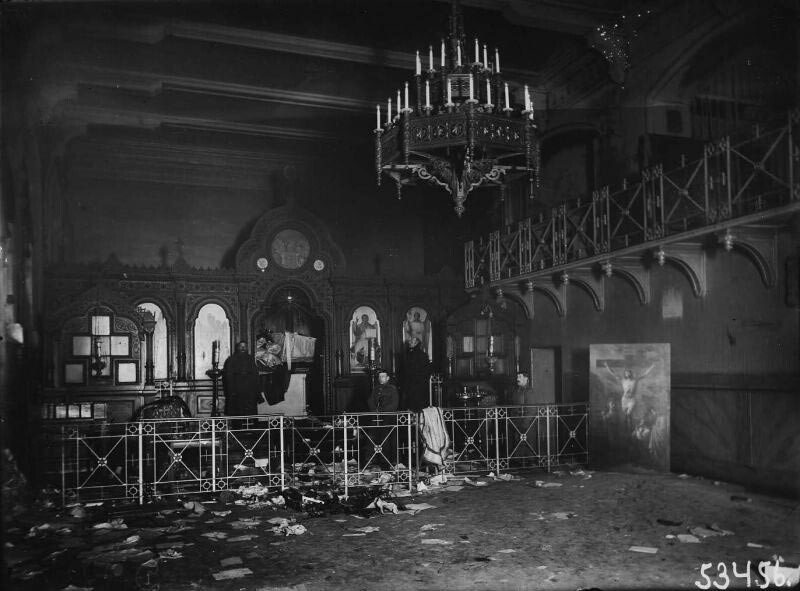 Inside a church after the Bolsheviks' 'visit'

After Lenin's death, various Bolshevik factions started to fight for power with each other, so the Church persecution stopped for a while. However, in 1928 the authorities decided to “intensify the anti-religious struggle” which was already considered just as important as the class struggle. A mass demolition of churches continued throughout the 1930s. As a result, by the time of the collapse of the USSR in 1991, only 7,000 of the 54,000 pre-revolutionary churches remained. 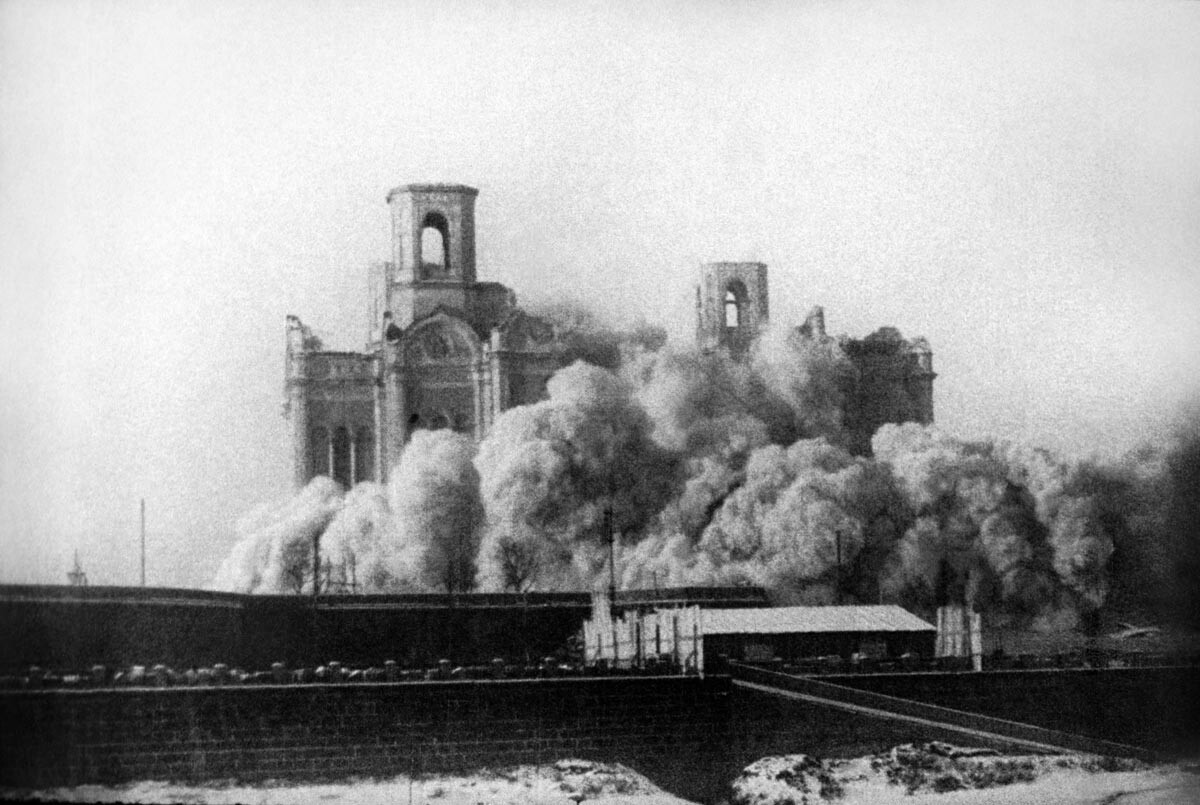 The demolishing of the Christ the Savior Cathedral in Moscow

Some churches, such as the Christ the Savior Cathedral in Moscow, were rebuilt after the collapse of the USSR. However, many were irrevocably lost. The cultural elites managed to defend the iconic St. Basil's Cathedral from demolition, instead preserving it as a museum. However, there’s another story of why the cathedral survived - according to one legend Stalin's right-hand man, Lazar Kaganovich, presented a project for Red Square’s reconstruction and removed the cathedral from the layout. Stalin allegedly answered: “Lazar, put it back!” 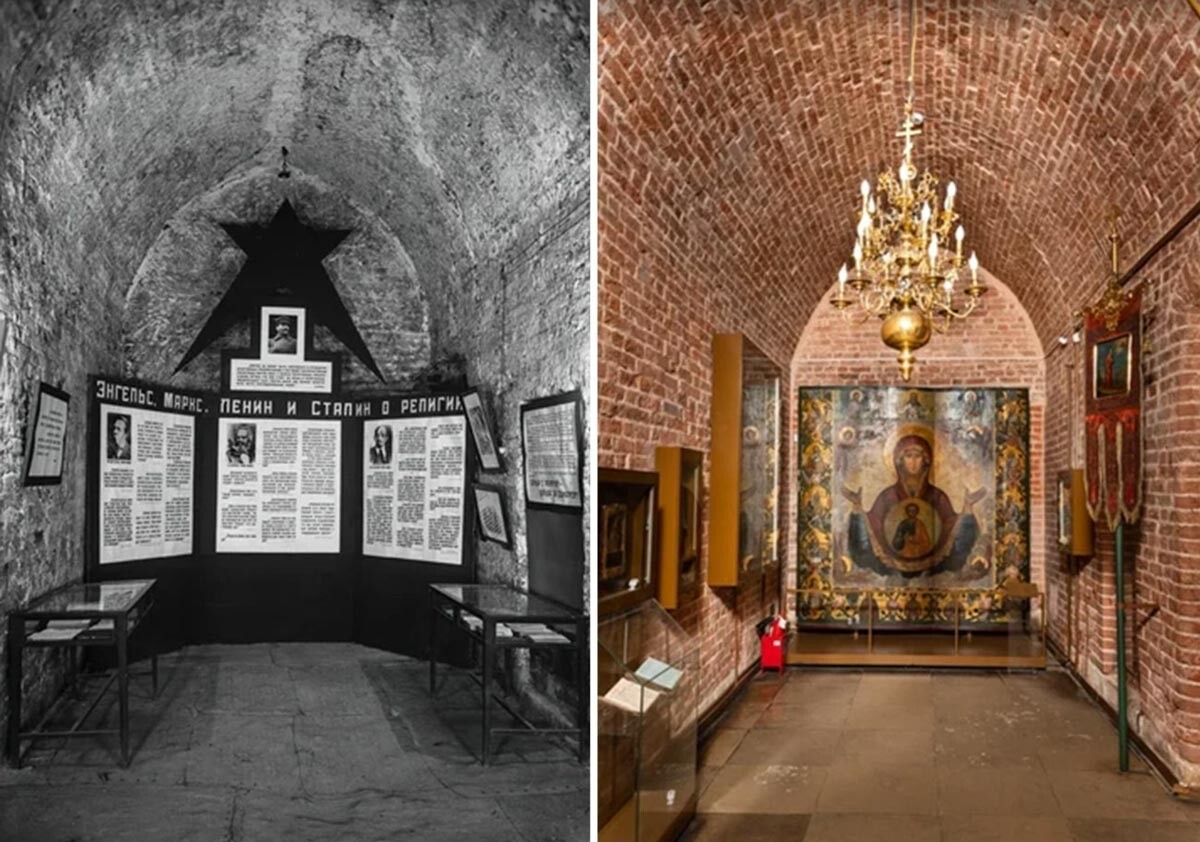 Inside St. Basil’s Cathedral in Moscow: during Soviet times (left), and today (right).

Without any hesitation the Bolsheviks demolished ancient churches if they interfered with the construction of hydroelectric power plants, driveways, or road extensions. Many churches were simply closed and used for the needs of the new Soviet regime: anything from a grain storage to a factory could be located in a church, while monasteries were often turned into prisons. As if to mock Christianity, the Museum of the History of Religion and Atheism was opened in the Kazansky Cathedral in St. Petersburg. Read more about what the Soviets did with ransacked churches.

The late 1930s saw the mass repressions known today as Stalin's Great Purge, and the those clergymen who survived the persecution of the 1920s weren’t able to escape this terror. They were arrested, often right during services - and most often for reasons of "anti-Soviet agitation." Many Orthodox priests and bishops served their sentences in prisons and in exile, as well as in the Gulag. Many died there or were executed.

In 1937 and 1938, about 20,000 people were shot dead at Butovo Firing Range near Moscow - and about a thousand were clerics of various confessions. In the 1990s, Patriarch Alexy II called those mass graves the "Russian Golgotha". All these people were repressed in an extrajudicial manner, on the verdict of the "NKVD troika", a simplified trial procedure. After the collapse of the USSR, 321 priests were canonized as "Butovo New Martyrs." 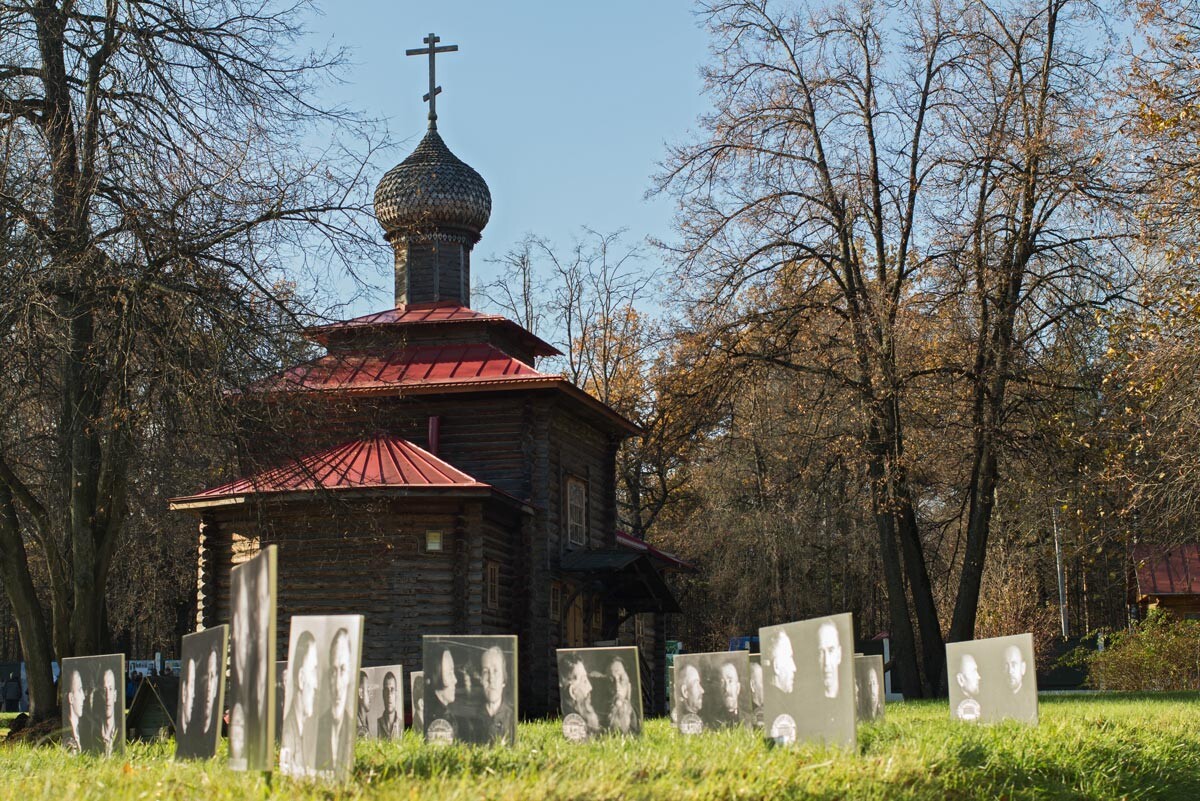 More than 1,700 martyrs and confessors of the Church of Russia who suffered persecution after the Bolshevik Revolution were canonized in the 1990s and 2000s as Russian Orthodox saints. According to various estimates, up to 100,000 people who served the Church in some capacity suffered during the entire Soviet period.

Read about how Stalin partially rehabilitated the Orthodox Church during World War II.