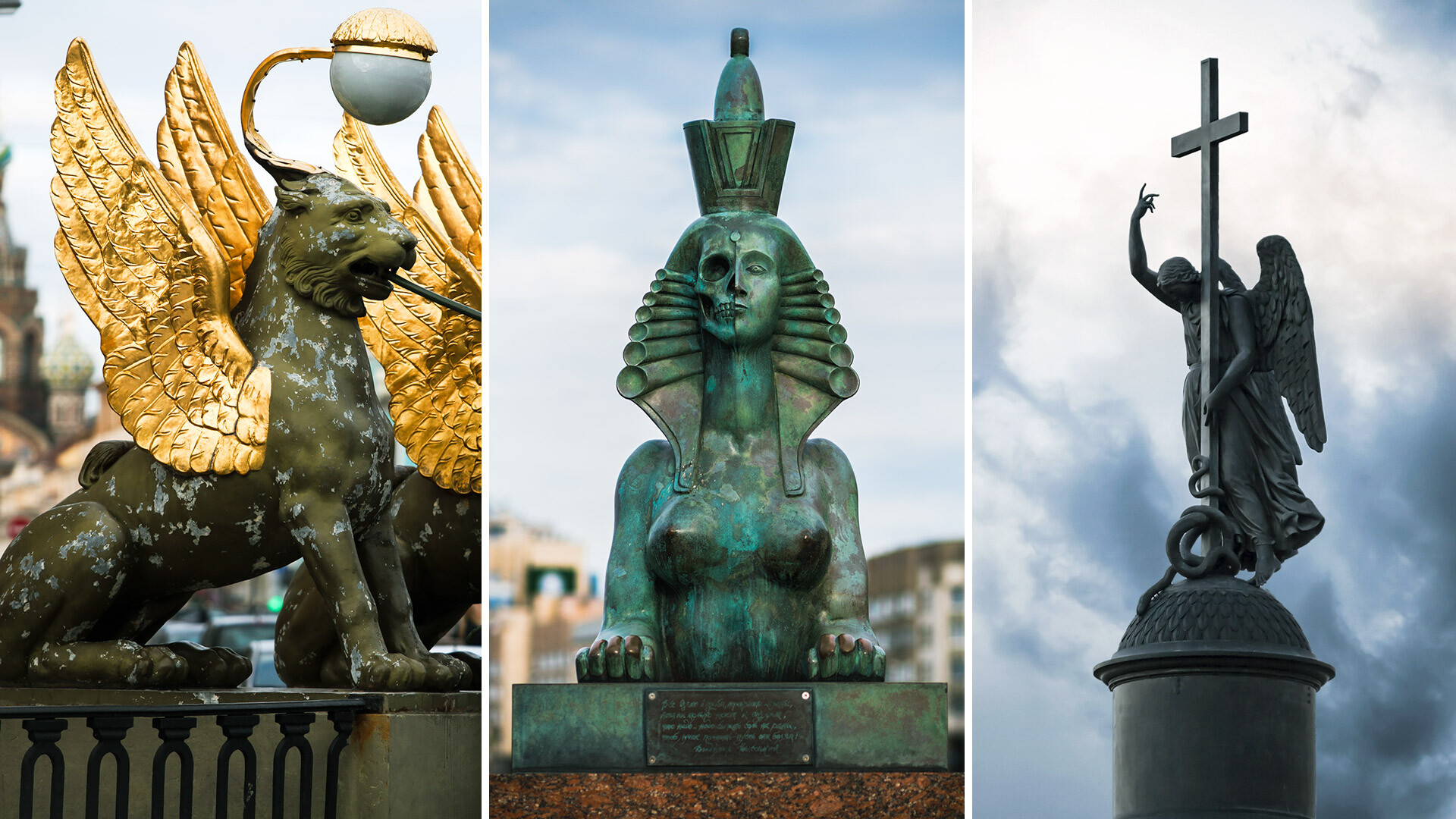 Legion Media
Having once been the imperial capital, St. Petersburg abounds in a variety of symbols embodied in mythological characters. Find out what tasks were assigned to the city’s angels, griffins, sphinxes and atlantes that sit watch around the city. 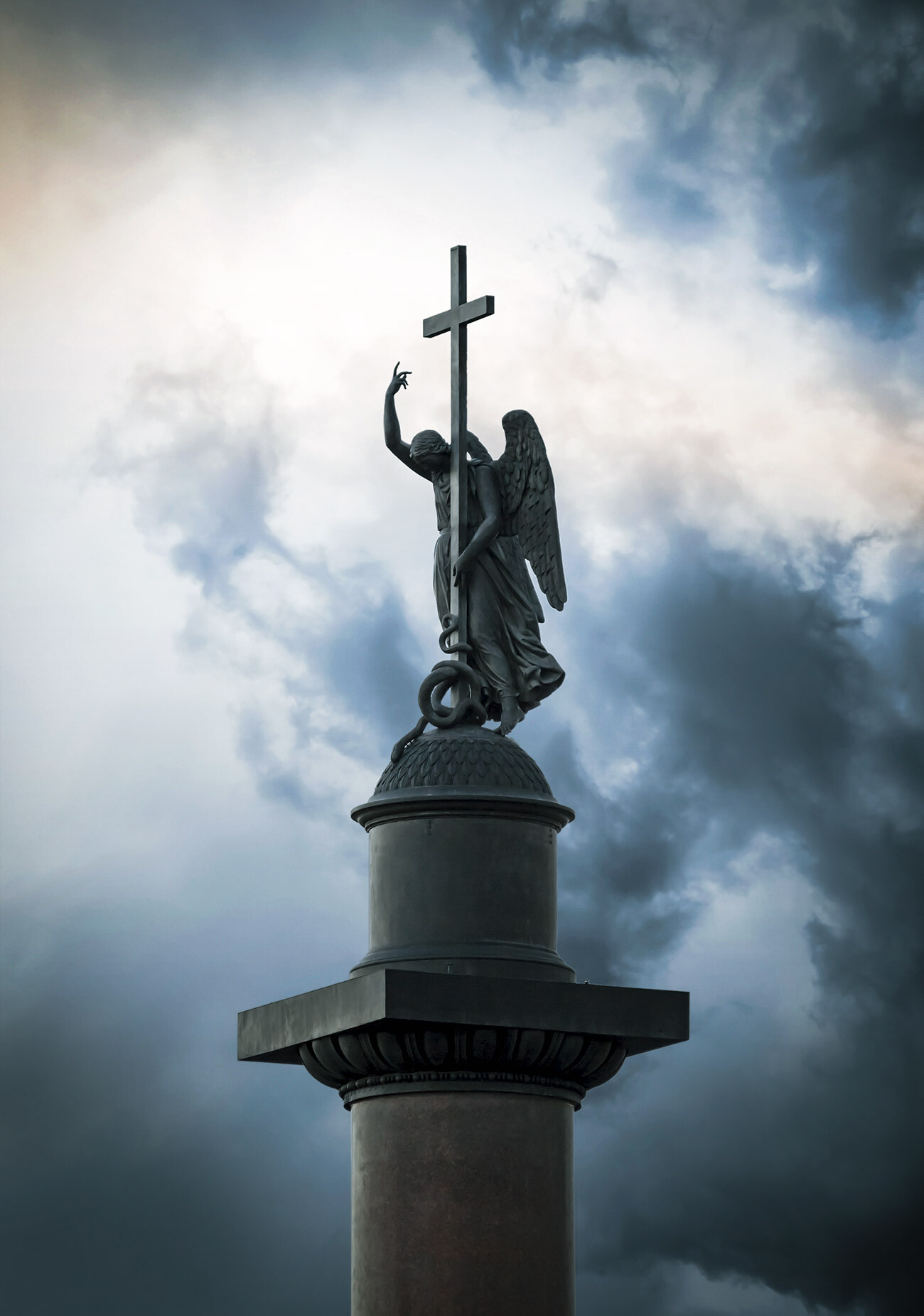 According to local history bloggers, Saint Petersburg is home to over 3,000 angel sculptures, which is a lot more than the city’s famed lions.

There is even a legend circulating in the area that the city dwellers are protected by three angels: the golden one on the Peter and Paul Fortress spire, the silver one - on the dome of the St. Catherine church and the bronze angel - on the Alexander Column on Palace Square. The latter is perhaps the most famous one in Saint Petersburg. Like the column itself, the bronze angel isn’t fixed in any way, relying on its own weight. The cross in the angel’s hands symbolizes peace, which Russia granted to Europe as it defeated Napoleon’s army in 1812. 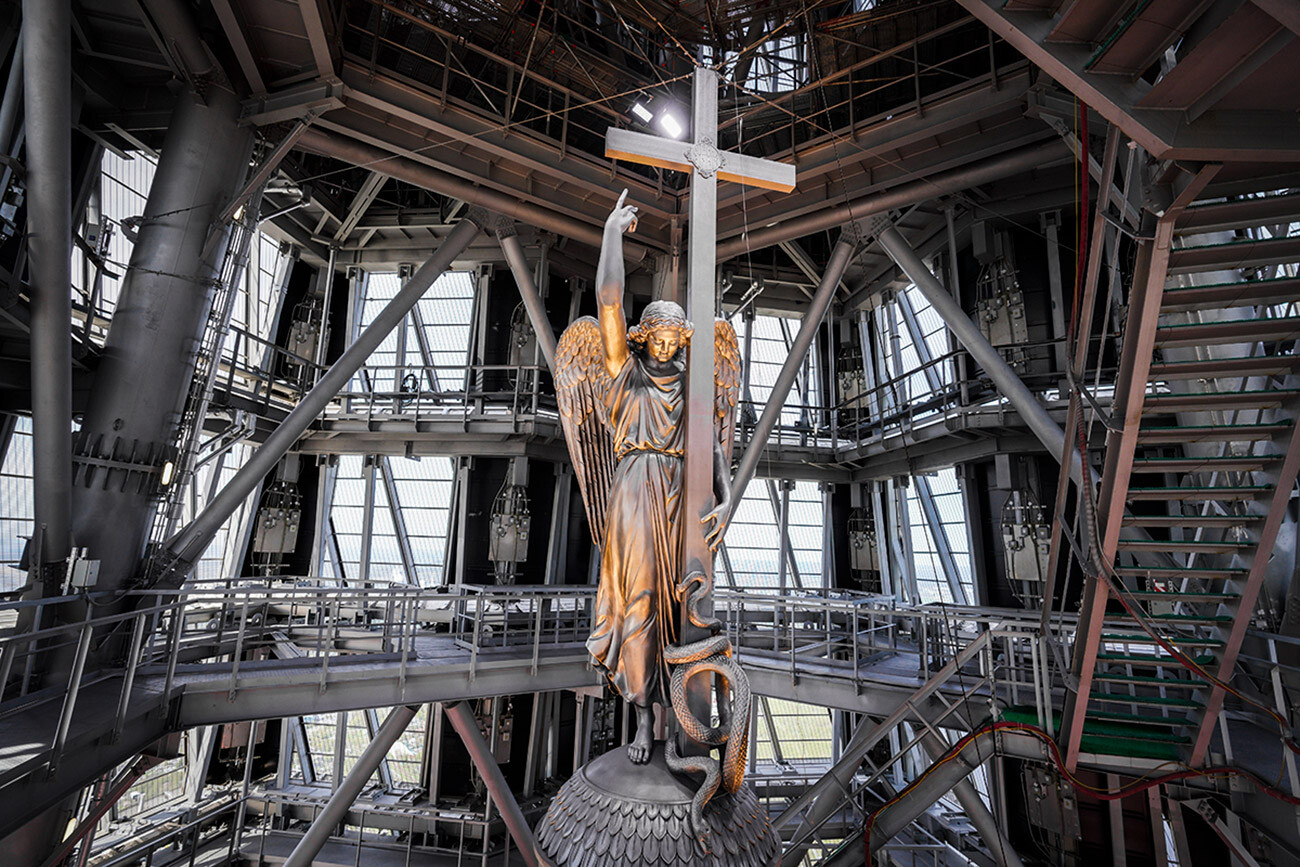 In May 2022, the 188-year-old angel was copied: the new sculpture was mounted on the 88th floor of the 462-meter Lakhta Center, the tallest building in Russia and Europe. It was consecrated by Kirill, Patriarch of Moscow and All Russia. 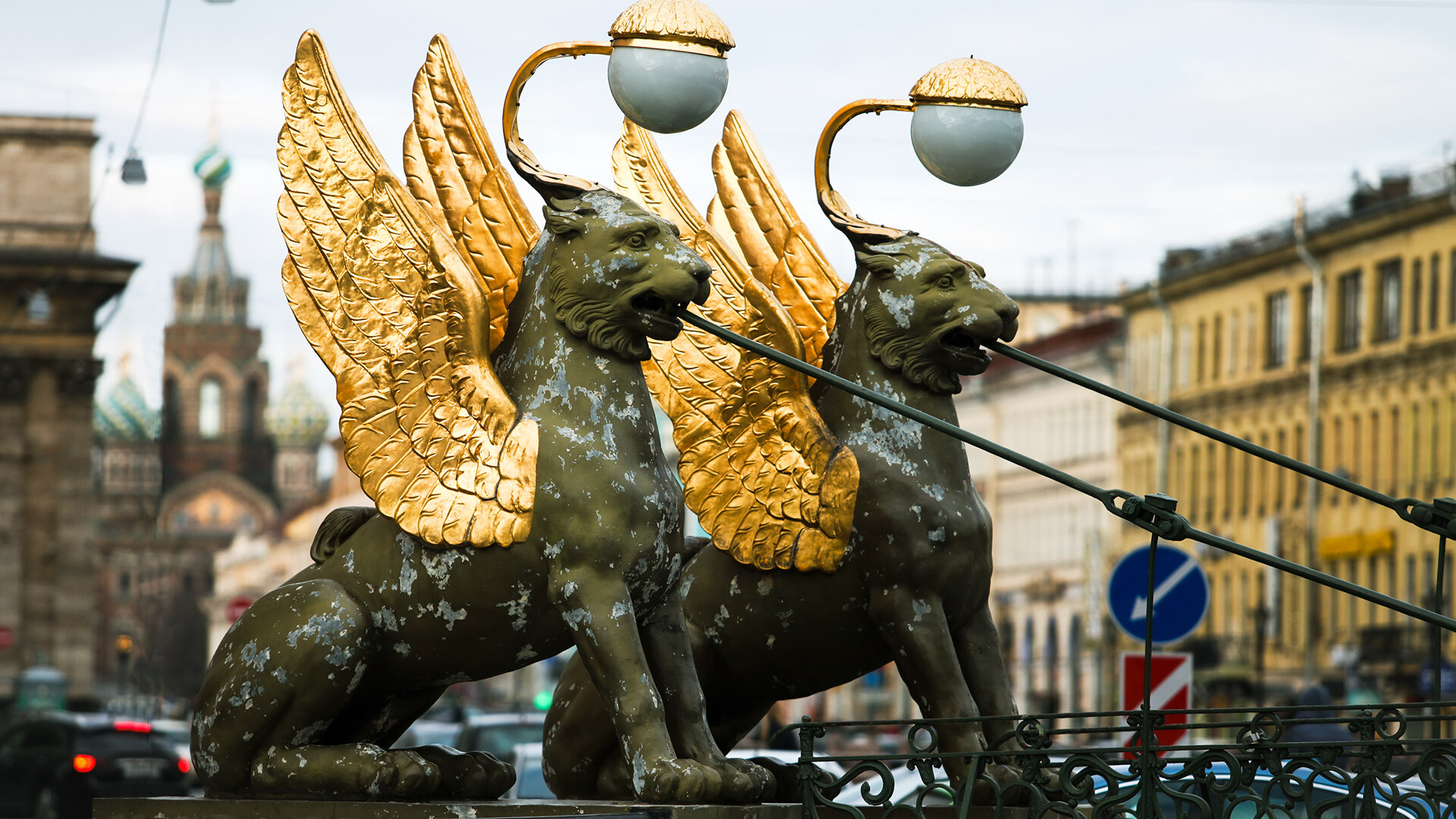 Myths have it that these winged creatures with a lion’s body and an eagle’s head kept guard over treasures. It is not surprising that the most well-known feathered lions emerged in 1826 on Bank Bridge, which led to the erection of the State Bank of Issue. The building currently houses the St. Petersburg State Economic University, which has griffins on its logo. 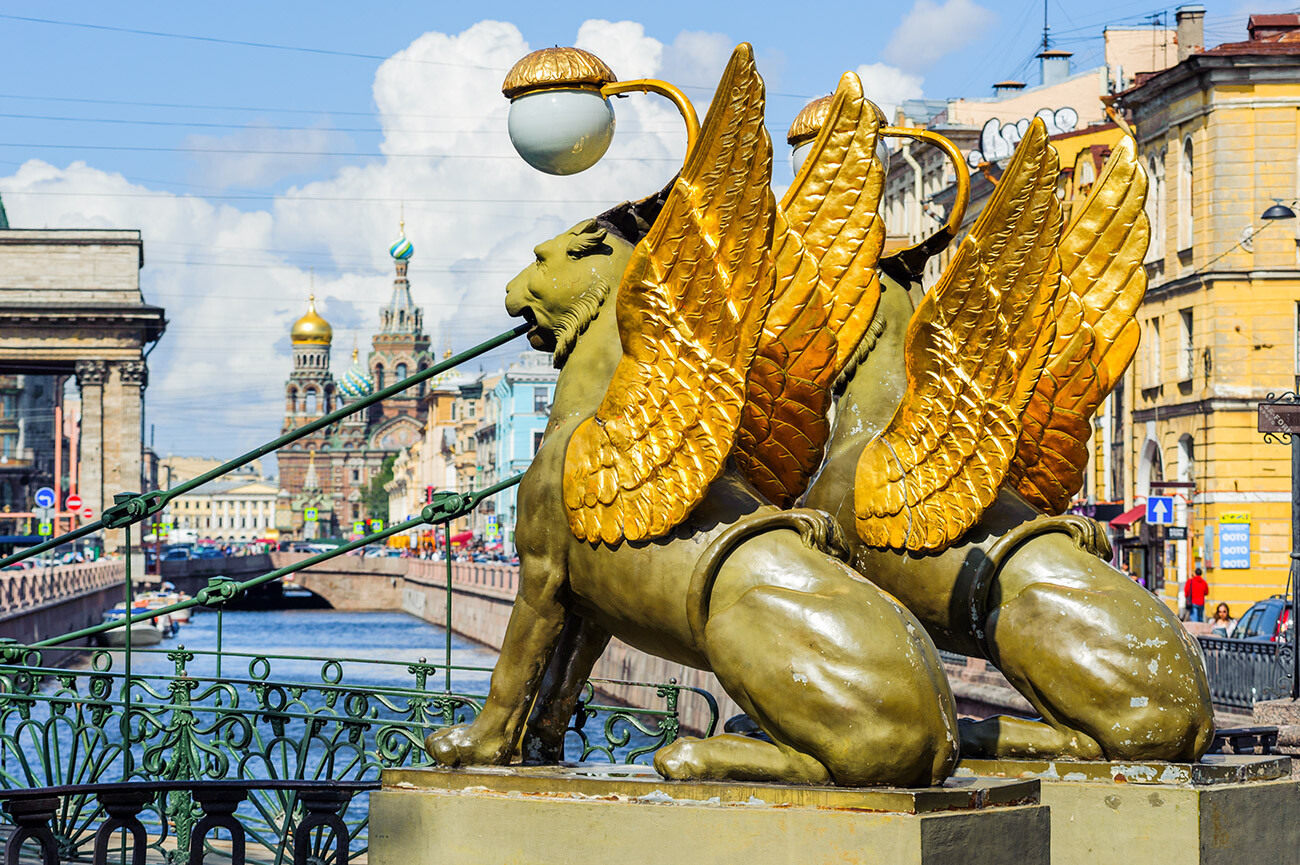 Superstitious students and tourists believe that touching the griffins’ gold-tinted wings will bring them luck. Yet, the belief has so far caused only harm to the famed monument. 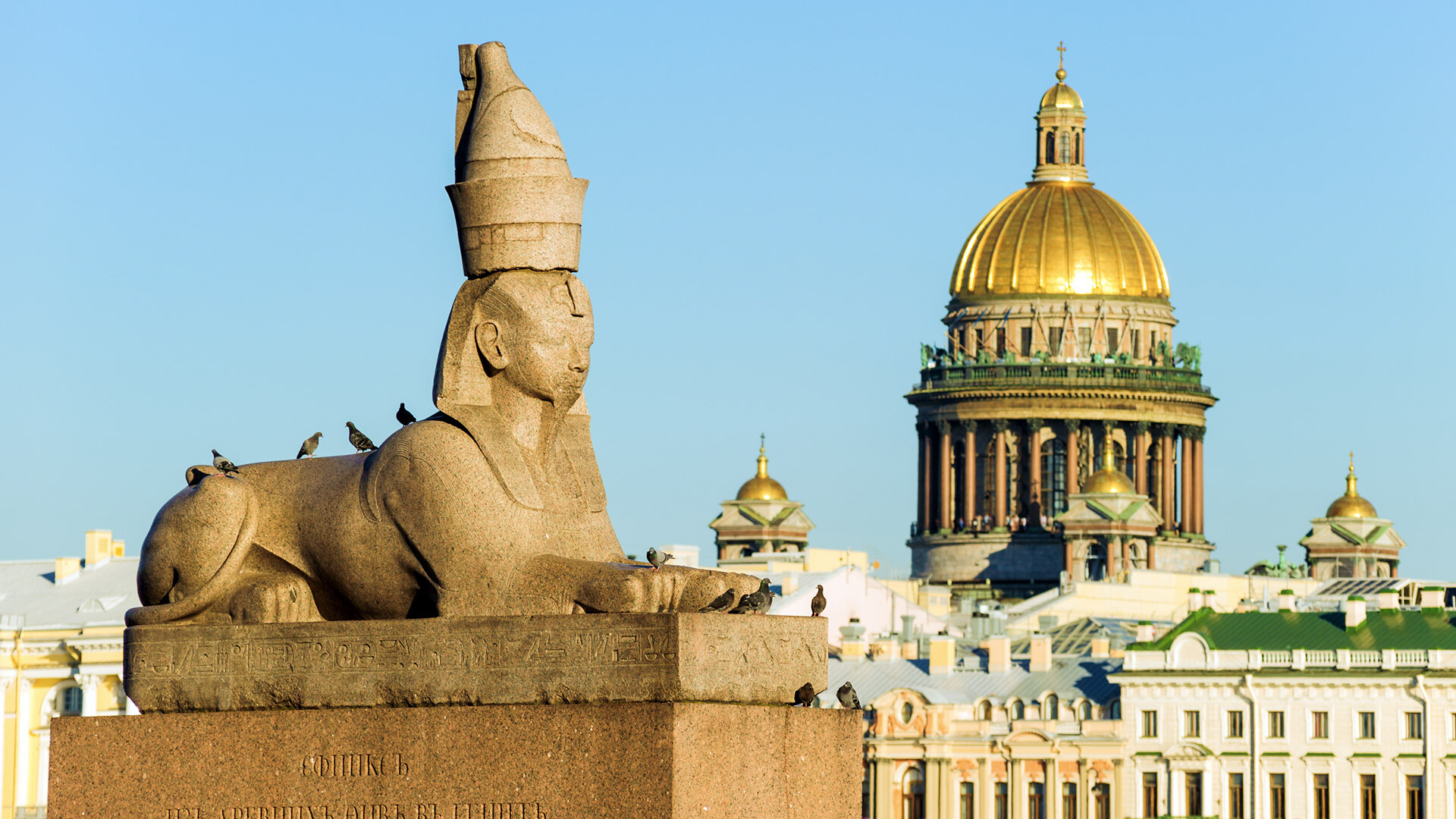 The mythical animals with a lion’s body and a human head, which symbolize wisdom and supreme power, come from Ancient Egypt. They rose to popularity in Europe after Napoleon Bonaparte’s campaign in Egypt (1798-1801), with the French emperor bringing home a wealth of ancient monuments. The trend made it to Saint Petersburg in the late 18th - early 19th centuries.

The most famed Egyptian sphinxes adorn Universitetskaya Embankment. The sculptures were made in the 14th century B.C. for Amenhotep III’s mortuary temple and brought to the Russian capital in 1832. 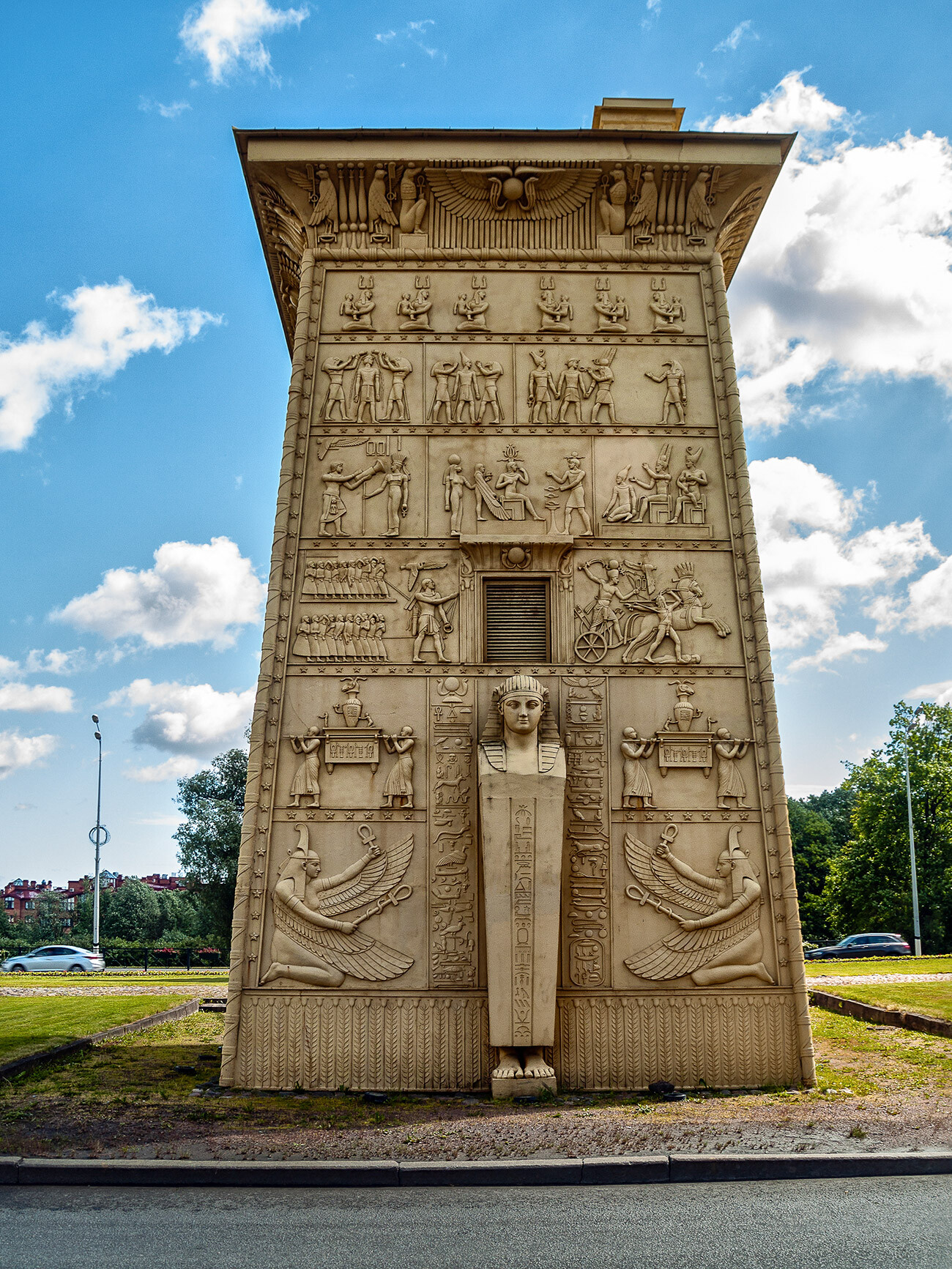 The number of sphinxes in the city currently stands at over 30. Apart from them, there is an Egyptian pyramid in Tsarskoye Selo in the city’s suburbs, as well as the Egyptian gate - in Pushkin, south of St. Petersburg, and statues of Egyptian gods - in its downtown area. 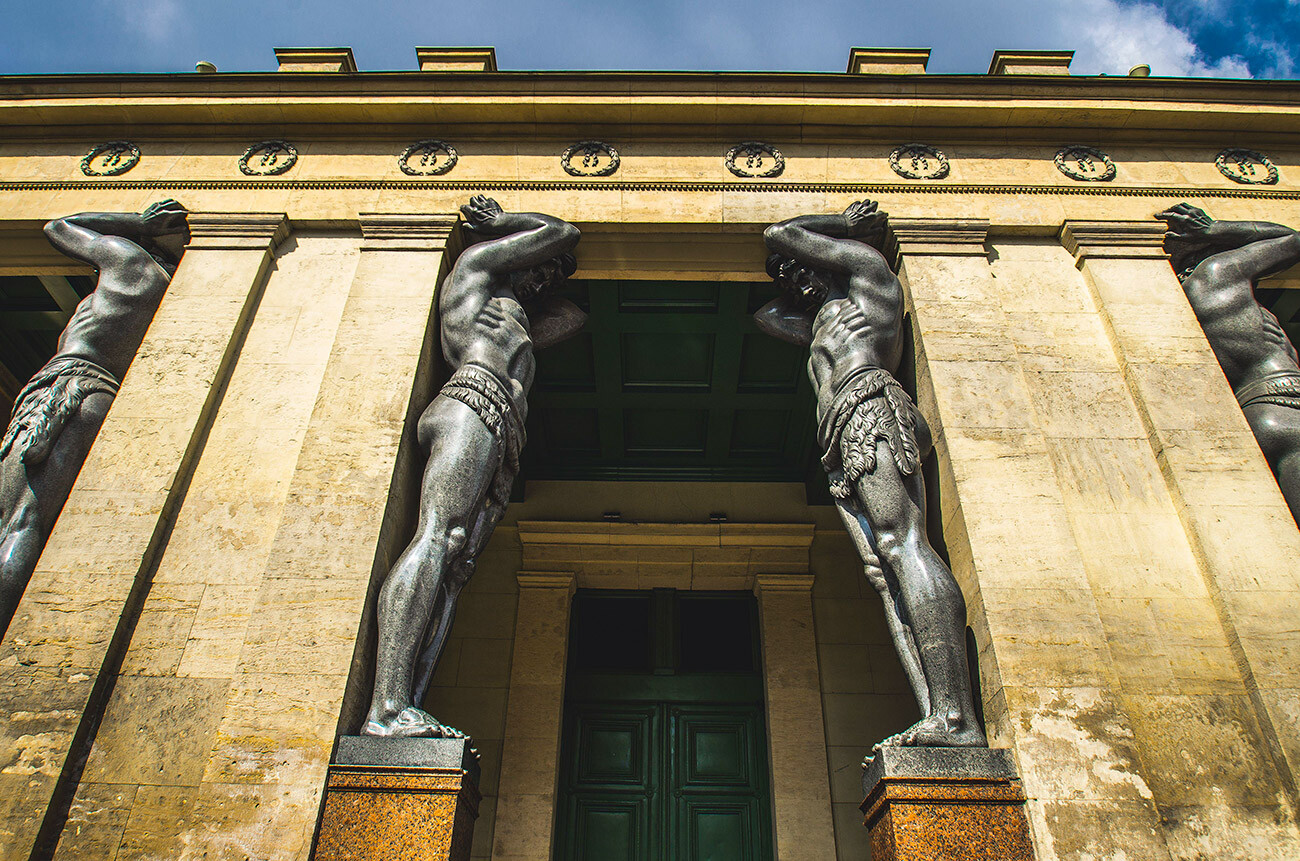 In Ancient Greek myths, mighty titans held the globe on their shoulders -  in St. Petersburg, they “prop up” palaces and commercial buildings. The city’s most famous ones have been holding the portico of the New Hermitage since 1848. It took a staggering 150 craftsmen two years to cut the ten 5-meter marble figures. 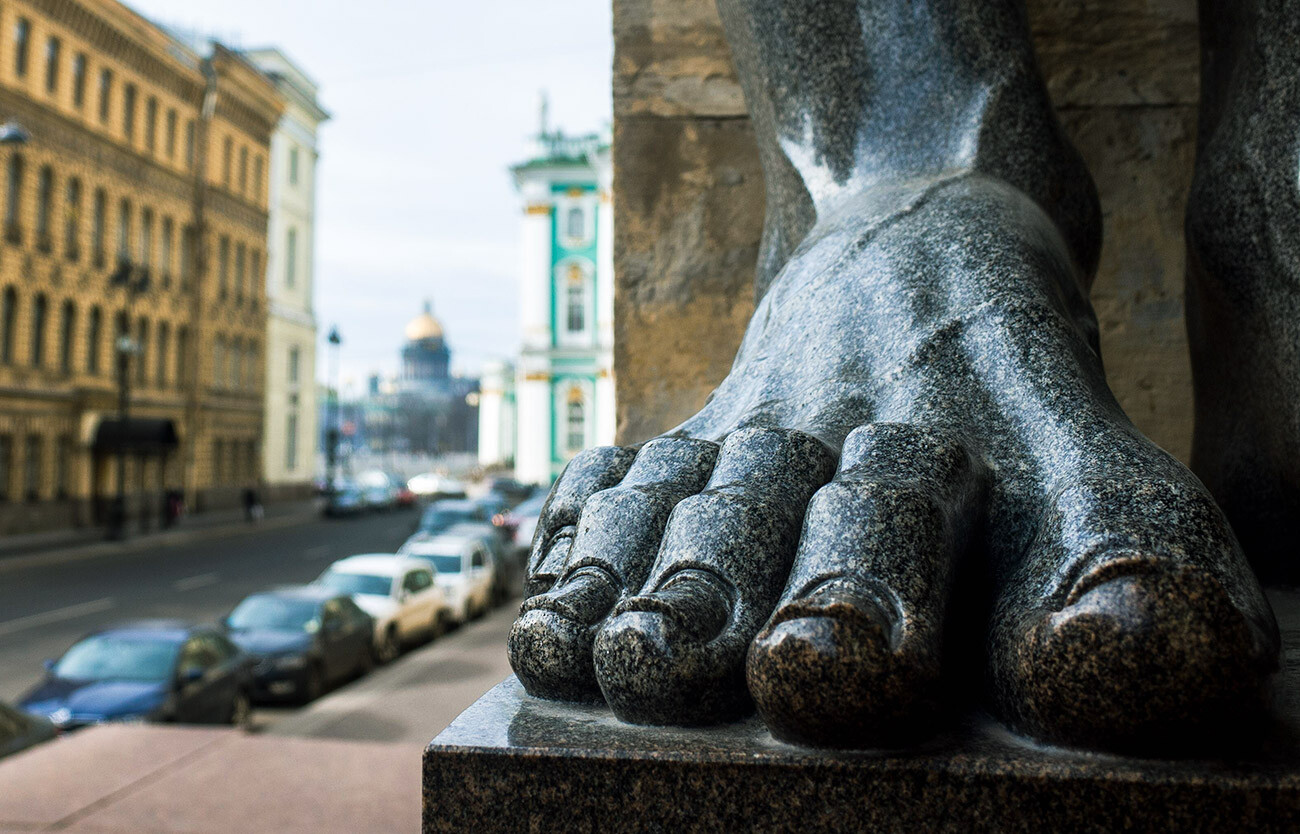 There is a tradition among newlyweds: if a newly-baked wife rubs the big toe of the right titan overlooking the Field of Mars, their family wife will be long and happy. The fact is that this very atlante was severely damaged during an artillery strike on the city during World War II, but survived, earning the reputation of a powerful defender. 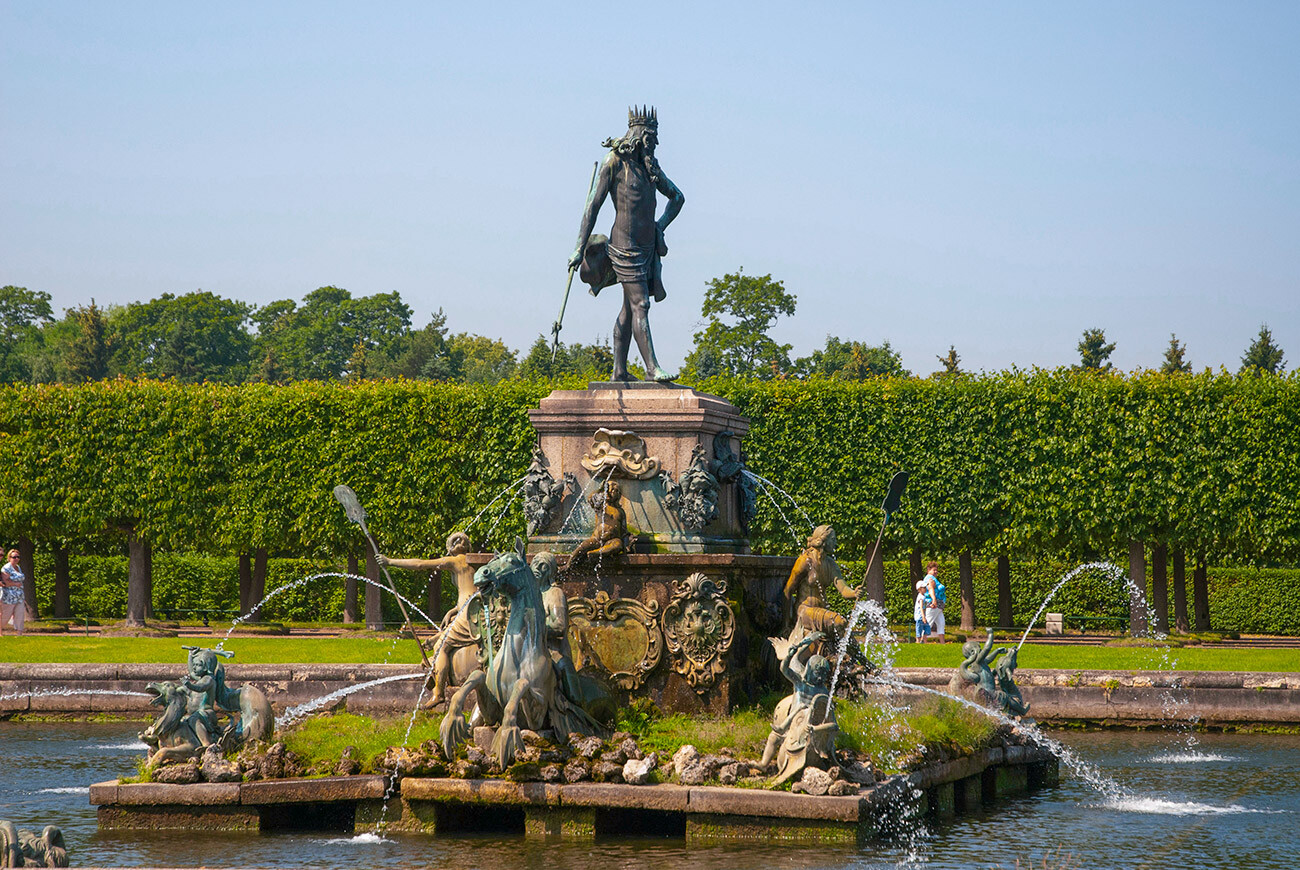 There is also a sort of special reserve of fantastic creatures. So can be said of the palace and park ensemble in Peterhof - formerly, Emperor Peter the Great’s country residence - which lies almost 30 kilometers away from St. Petersburg, despite formally being part of the city. Peterhof boasts 147 active fountains, which makes it one of the world’s biggest fountain systems. Among the unique Peterhof fountain sculptures, you can spot various depictions of Neptune, Triton, nymphs, sirens and other mythical creatures.