5 facts about Peterhof, the Russian emperors’ most luxurious residence (PHOTOS) 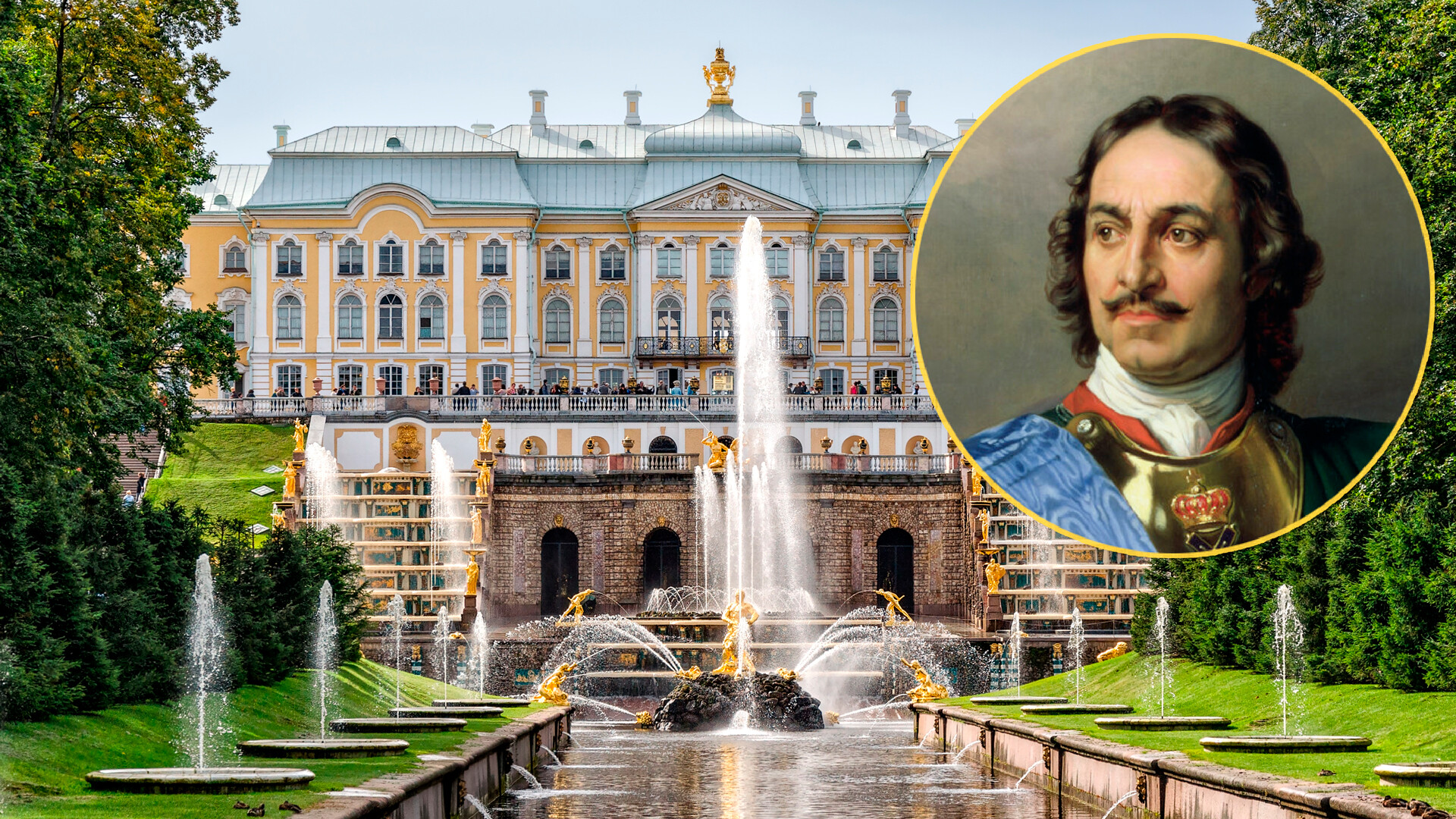 Russia Beyond (Legion Media, Paul Delaroche, 1838 / Hamburger Kunsthalle / Public domain)
Peter the Great planned to build a palace and park ensemble on the shores of the Gulf of Finland in order to show all the majesty and power of the Russian Empire. It seems that he succeeded.

1. Peter the Great intended Peterhof to be the ‘Russian Versailles’

During the Great Northern War (1700-1721), Peter the Great defeated the Swedes and secured the region where the Neva River flowed into the Gulf of Finland. In 1703, on this newly-conquered land, he founded St. Petersburg, which became the capital of his empire. Already in 1714, just nearby, on the southern shore of the Gulf of Finland, Peter began to build a country residence - Peterhof, literally “Peter's court”. 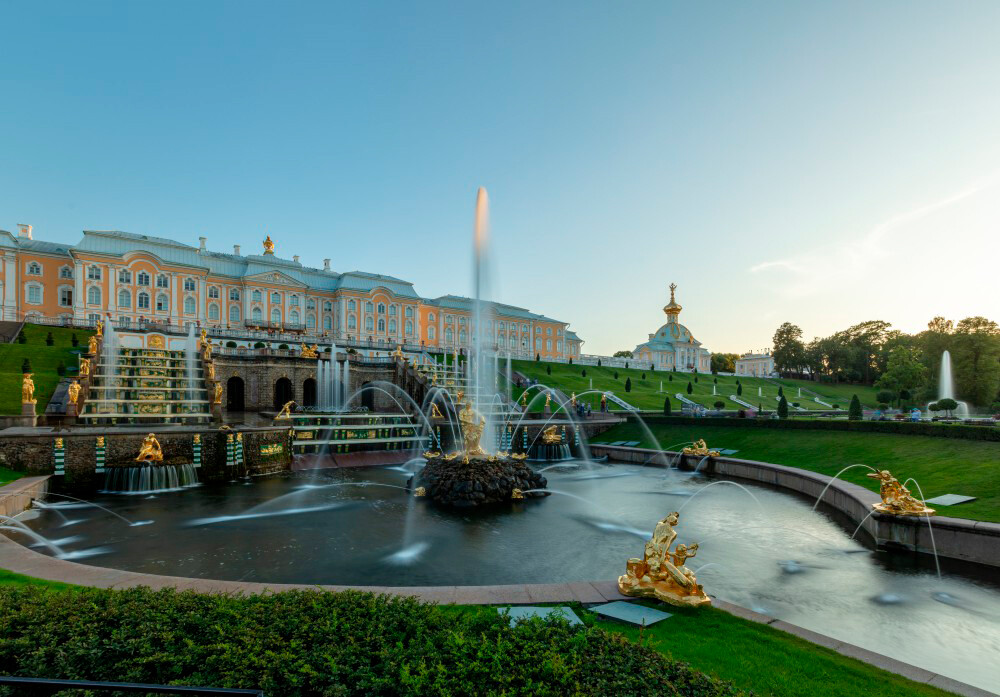 According to the Emperor's concept, the palace in Peterhof, and most importantly the adjacent park with its fountains, would eclipse the beauty and luxury of Versailles, the residence of the French kings.

The undoubted jewel and ‘calling card’ of the entire Peterhof complex is the stunning system of fountains, which in 2021 celebrated its 300th anniversary! 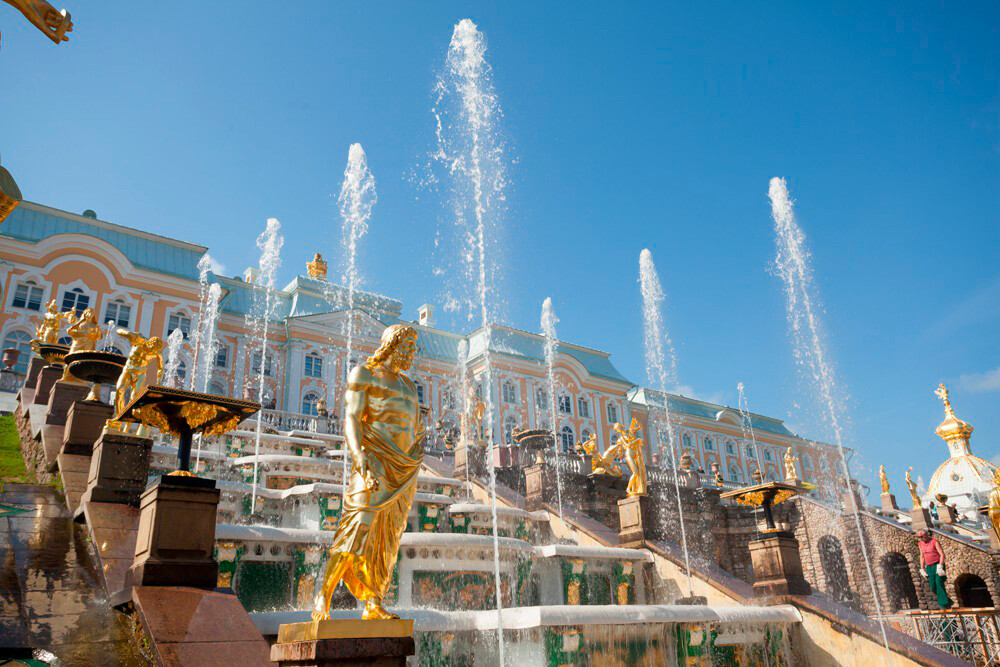 Peter wanted the fountains to work without the help of pumps. So, the Russian hydraulic engineer Vasily Tuvolkov invented how to ensure an uninterrupted supply of water. Almost a perpetuum mobile! For this purpose he built a special dam, a system of sluices and ponds, as well as a 24-kilometer canal to bring water to the main fountain, the Grand Cascade. 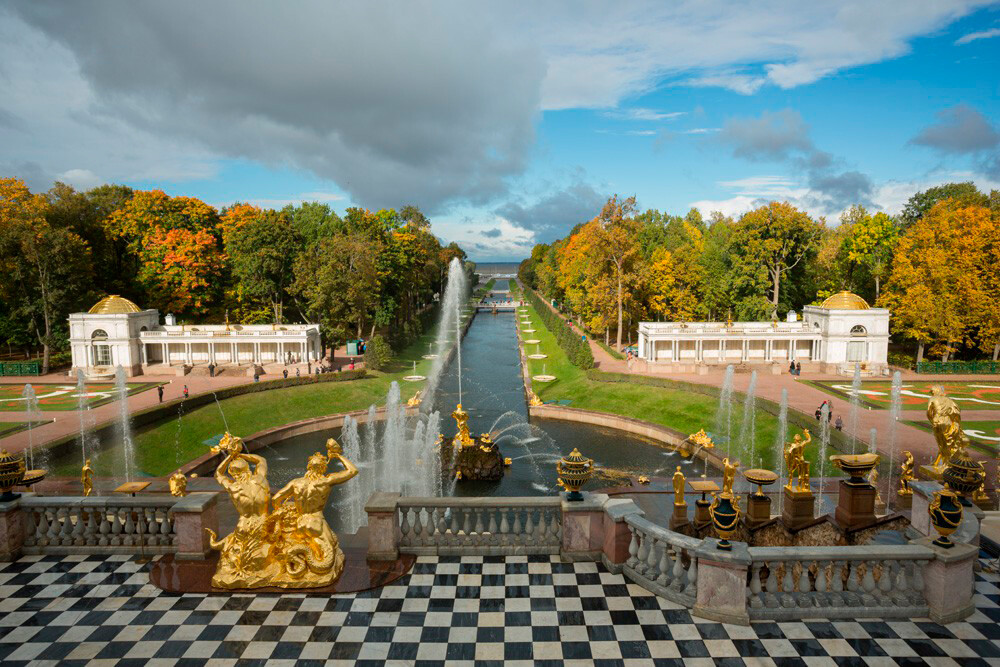 The upper terrace of the Grand Cascade

The Grand Cascade is the most grandiose fountain, which includes two staircases, a grotto and many sculptures. From it, the alley of fountains runs straight into the sea. 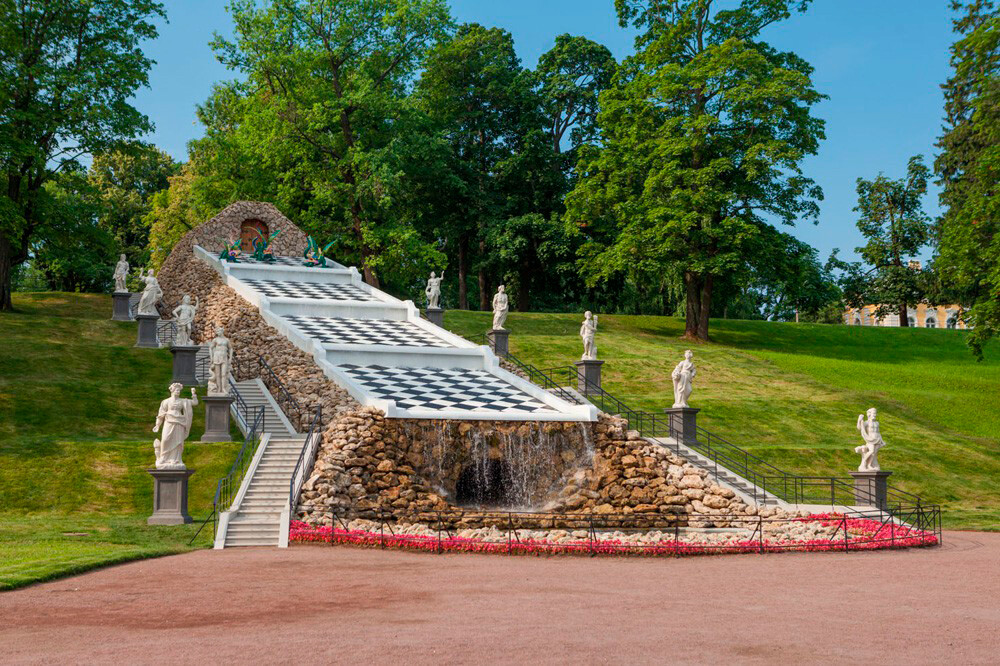 In addition, the real masterpieces are the cascades - “Lion” and “Chessboard Hill” - as well as the fountains “Samson” and “Triton”. In total, there are more than 150 different fountains in the palace and park. 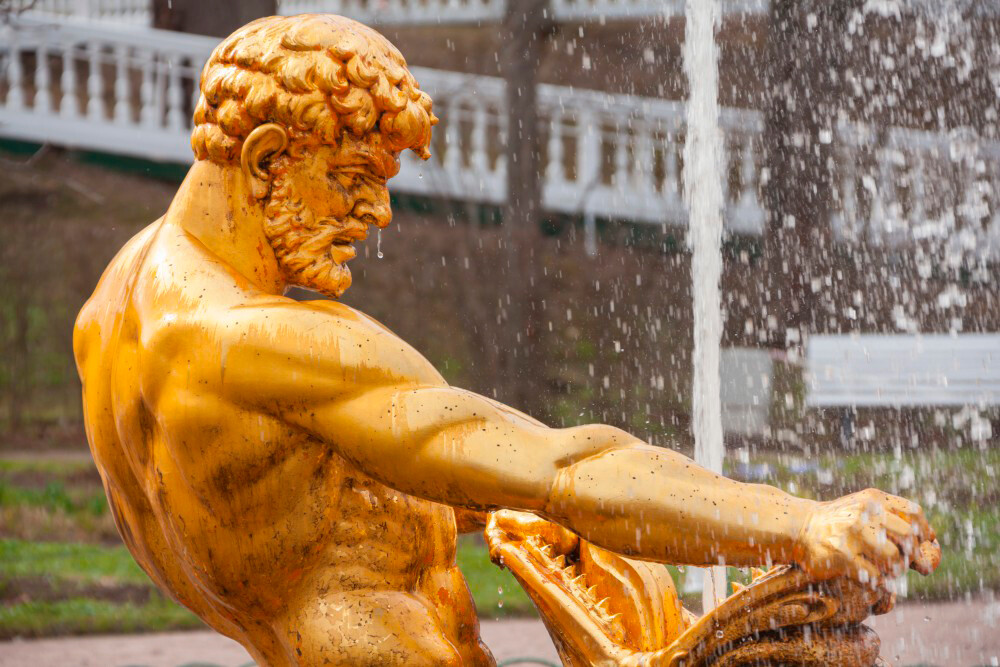 There are also trick-fountains in Peterhof, such as "the Benches", in which Peter the Great himself had a hand in designing. When a person comes close to the bench and steps on the stones in front of it, the fountain turns on. Today, it’s a fun attraction for children, but at the beginning of the 18th century Peter greatly enjoyed it when the fountain suddenly doused water on unsuspecting noble lords and ladies. 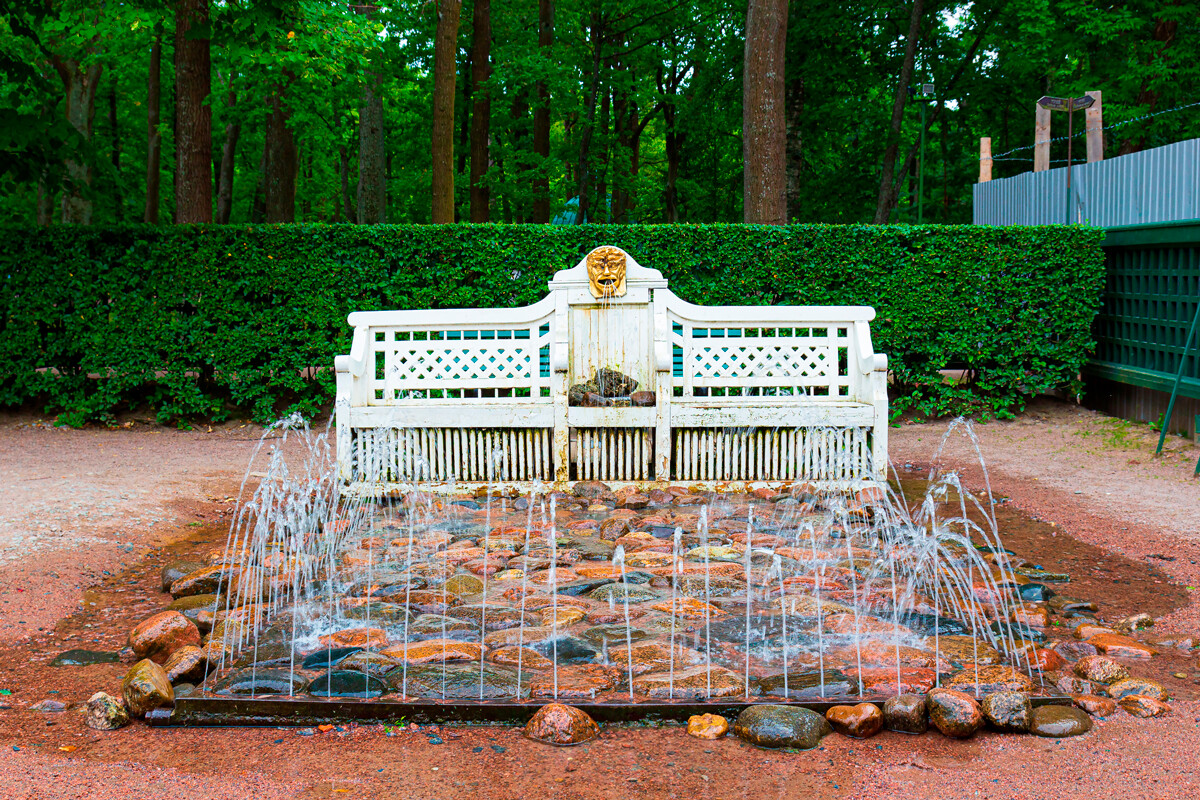 3. Peter the Great's daughter rebuilt the Great Palace in the baroque style

The Grand Palace - the central and ceremonial part of Peterhof - stretches almost 300 meters parallel to the coastline, towering over the Lower Park and its fountains. Behind the palace is the Upper Garden. 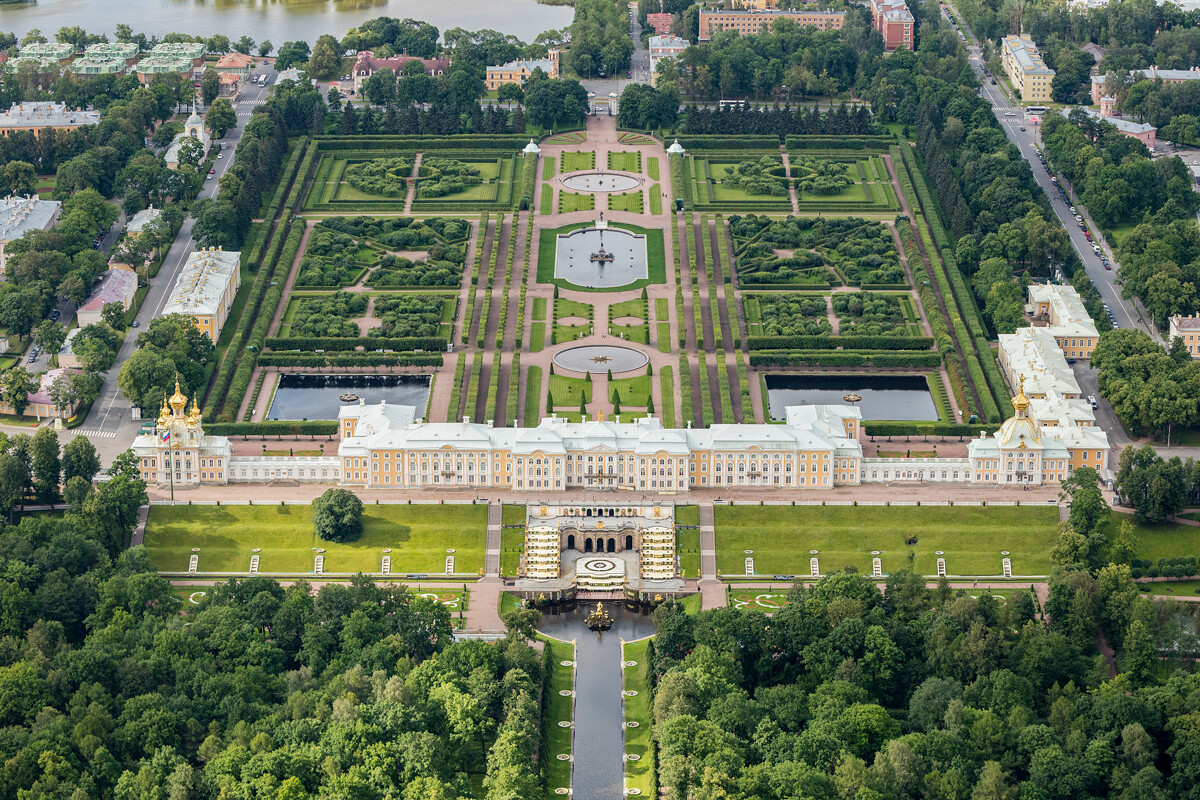 View on the Upper Garden that also has a fountain system

Initially, the palace looked somewhat modest. Then, in the mid-18th century Empress Elizaveta Petrovna, the daughter of Peter the Great,, rebuilt it in the then fashionable Baroque style according to the design of the talented Italian architect Bartolomeo Rastrelli who also built the Winter Palace and the palace at Tsarskoye Selo. During the 19th century the emperors also slightly altered the palace exterior, adding superstructures and new rooms. 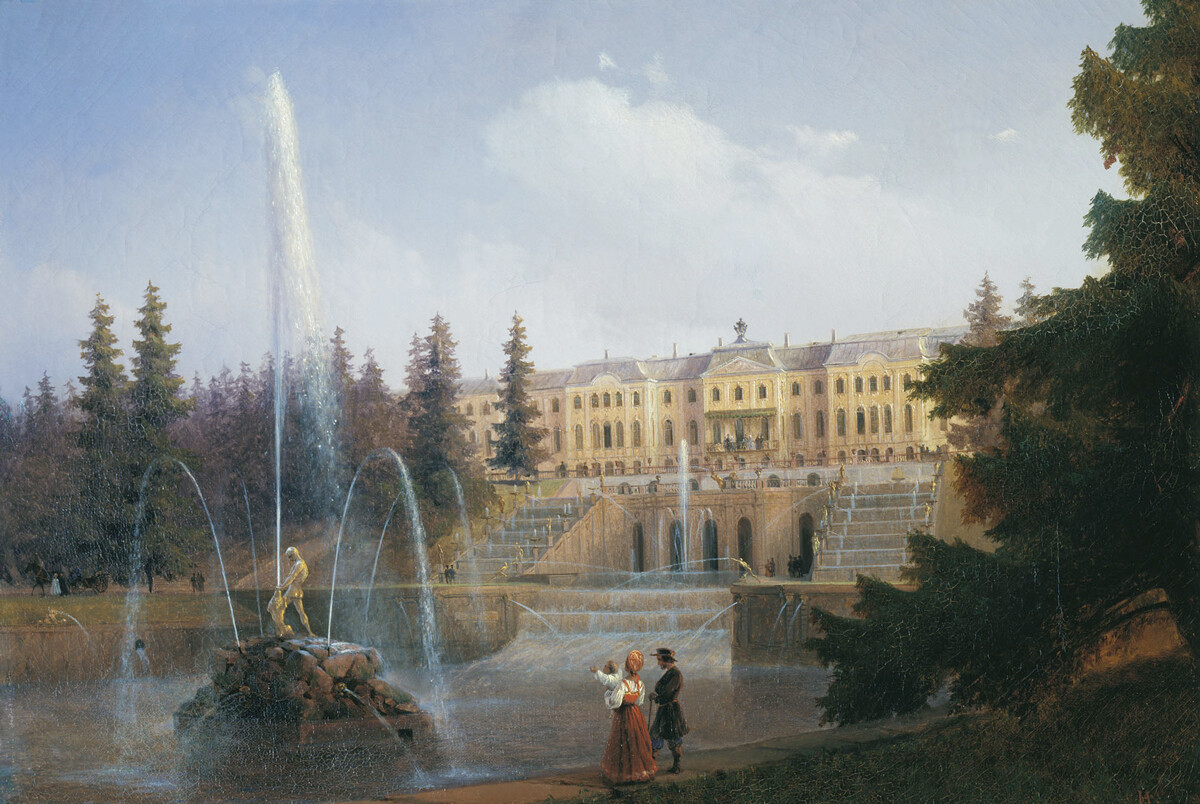 Ivan Aivazovsky. View on the Grand Cascade and the Grand Peterhof Palace. 1837

The palace is rich in decorative elements - sculptures, bas-reliefs and all sorts of twists and turns. The interior decoration is even more pompous and replete with gilding. 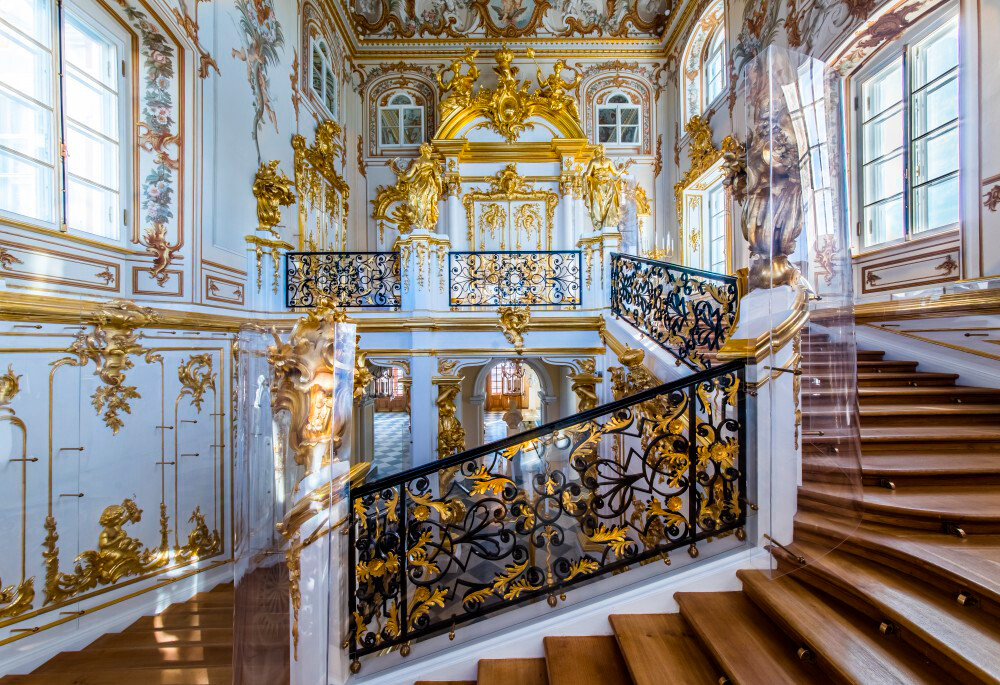 The palace was not a permanent residence - the emperors occasionally visited in summer and mostly held entertainment events for the court. During the great feasts of the 19th century, ordinary people were even allowed into the park so that they could admire the greatness of the Empire and the Emperor.

“Imagine a palace built on a natural terrace, which in height can be compared to a mountain in a country of boundless plains, a country so flat that when one ascends a hill sixty feet high the horizon expands almost to infinity. At the foot of this imposing terrace begins a beautiful park, reaching as far as the sea, where navy ships are lined up, illuminated on the evening of the feast,” this is how the Marquis de Custine described the palace he visited in 1839 during an annual extravagant feast arranged by Nicholas I. 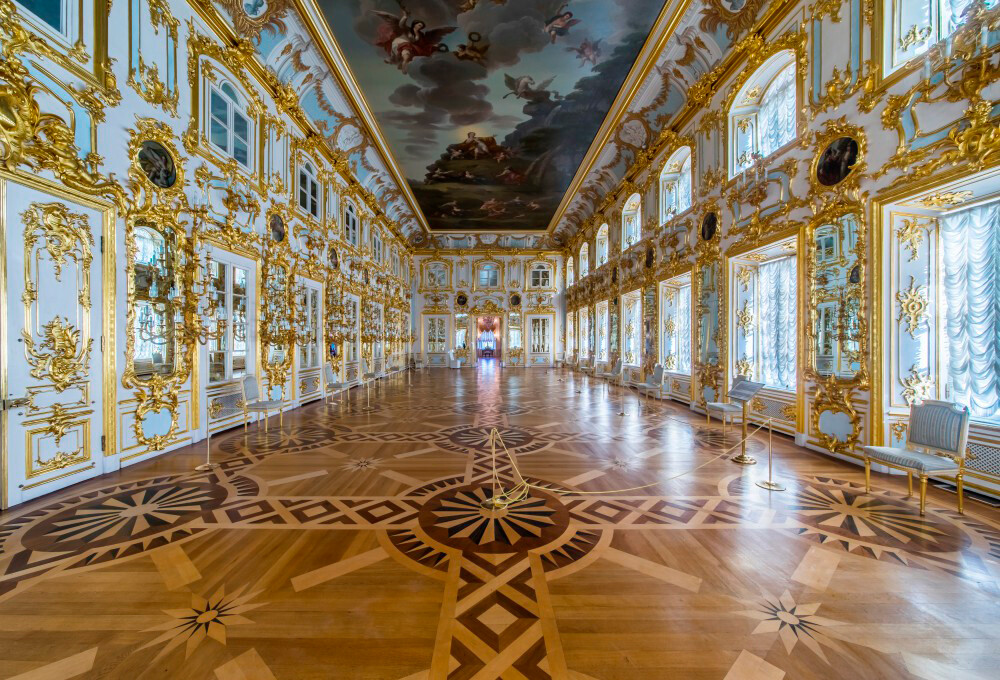 Under Catherine the Great an important room in the palace became the new Chesme Hall, built to glorify the decisive victory of the Russian fleet in the Battle of Chesme (1770) during the Russo-Turkish War. The hall is decorated with a series of war paintings devoted to the battle. 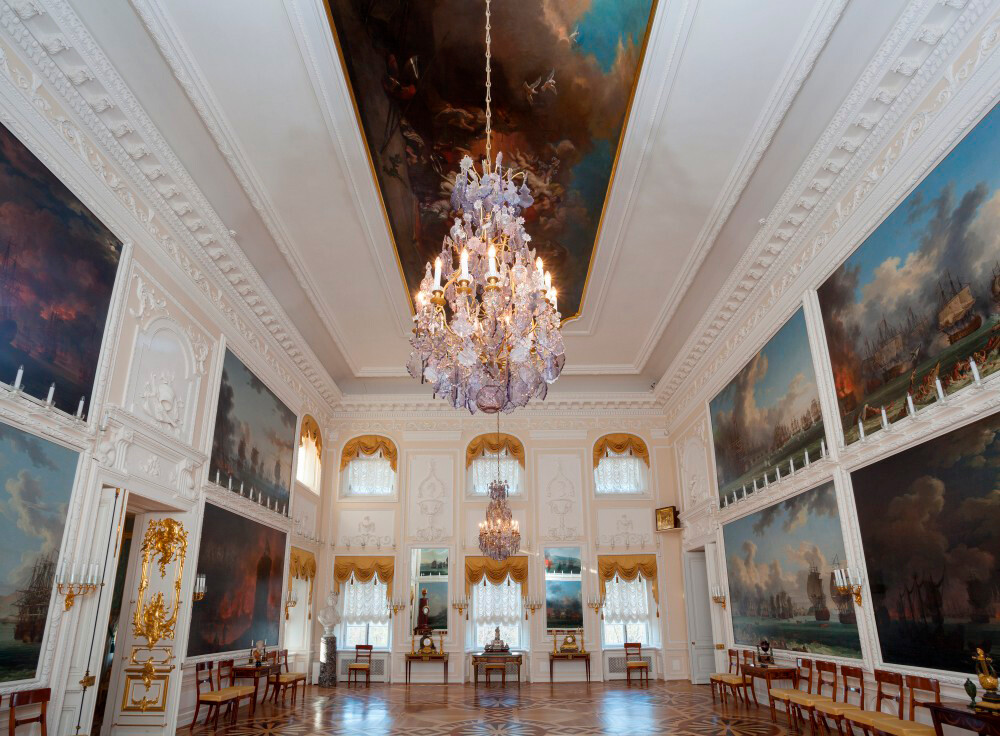 The total area occupied by Peterhof’s palaces, parks and gardens is 414 hectares. Peterhof is not limited to the Grand Palace. To the west, in the 1720s the Marly Palace was built for guests; (referring to the Marly-le-Roi residence of France’s King Louis XIV). It was designed to be reflected in the water, and the pond’s smoothness gives it the appearance of floating in the air. 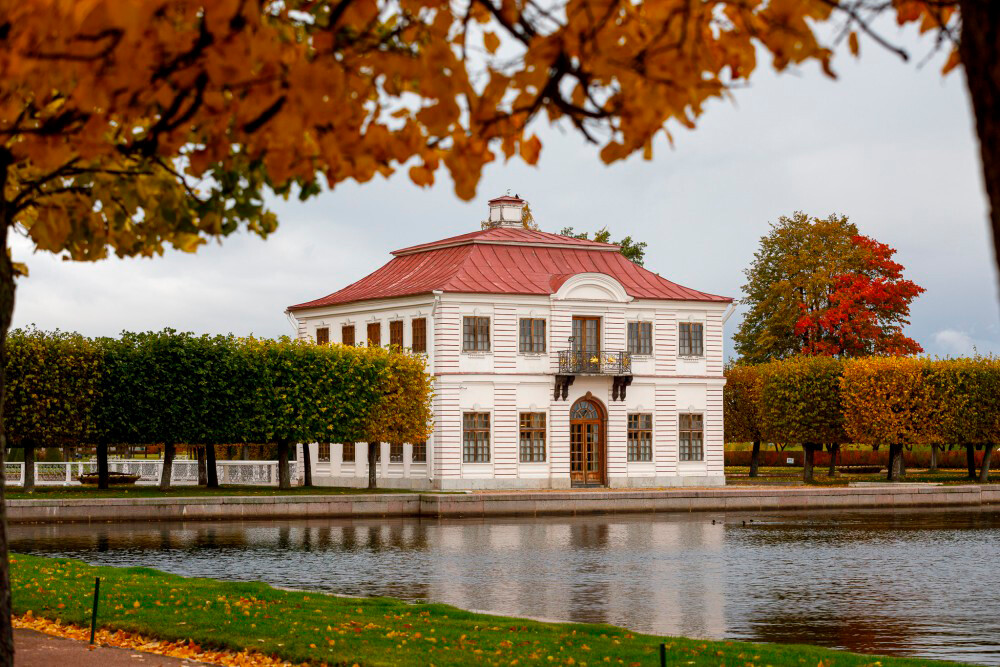 To the east of the Grand Palace on the shore of the Gulf of Finland is situated a one-story ‘Dutch house’, the Monplaisir Palace. The name translates from French as "my pleasure," and it was the favorite country palace of Peter the Great. 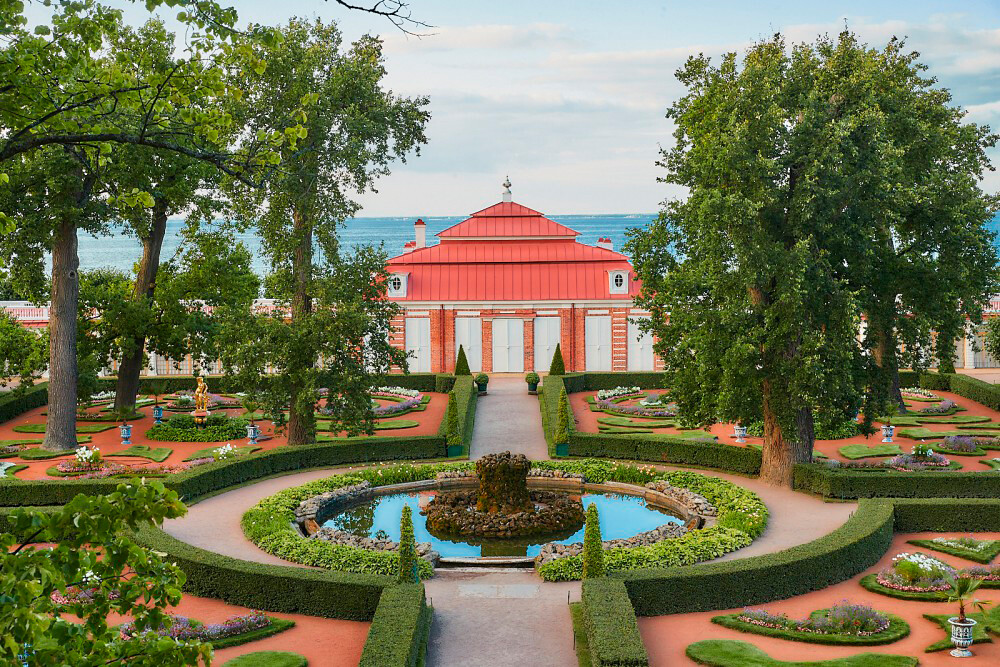 Next to Monplaisir is located a later building, the one-story Catherine Block, built for the future Catherine the Great, who at that time was only the wife of the crown prince, the future Peter III. After Catherine became Empress (having dethroned her husband), she moved to another, no less luxurious country residence, Tsarskoye Selo. 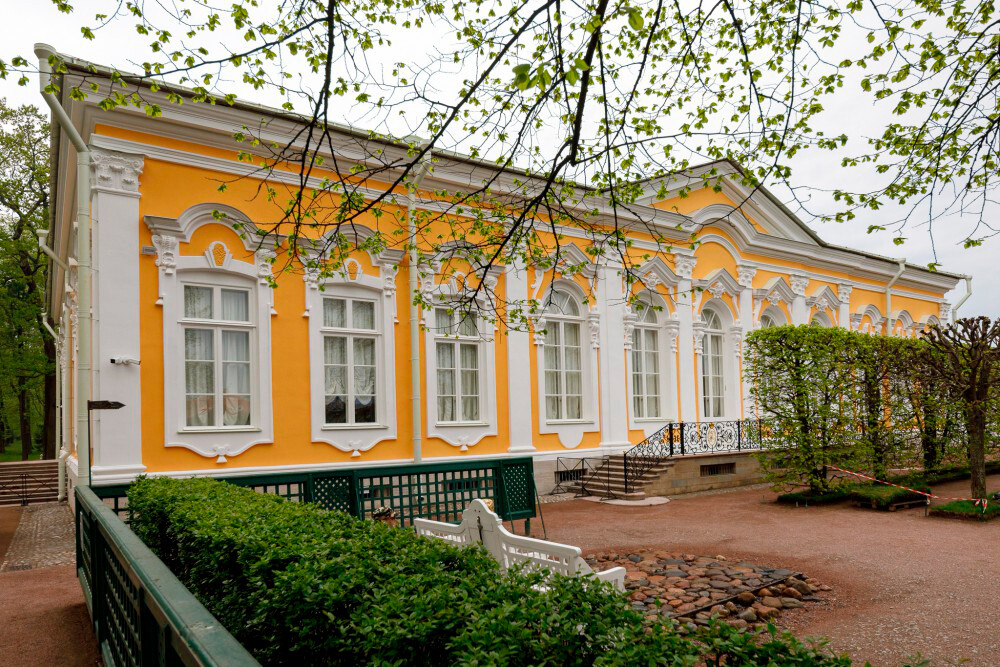 In addition to these buildings, today the Peterhof museum-reserve also includes nearby palaces and park ensembles (Alexandria, Oranienbaum, Strelna and others), which in the years after Peter the Great the imperial family built for themselves.

The neo-Gothic 'Cottage' palace was built for the wife of Nicholas I, Empress Alexandra Feodorovna, and in her honor all of Peterhof with the adjacent park was named Alexandria. 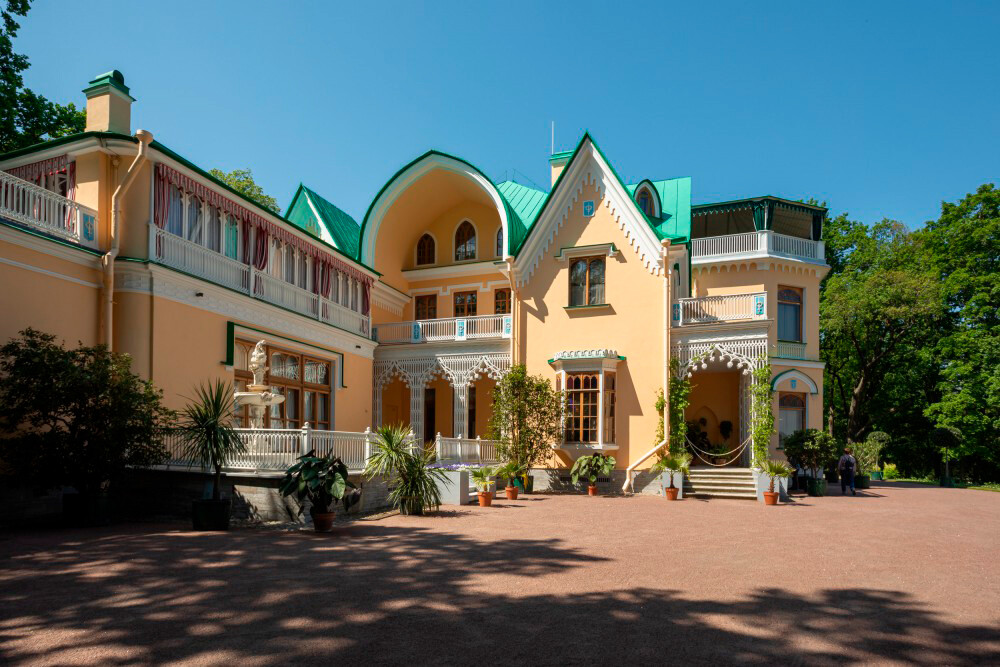 The Cottage Palace in Alexandria

The Grand Menshikov palace was built for Peter's closest associate in nearby Oranienbaum and it's the oldest building. 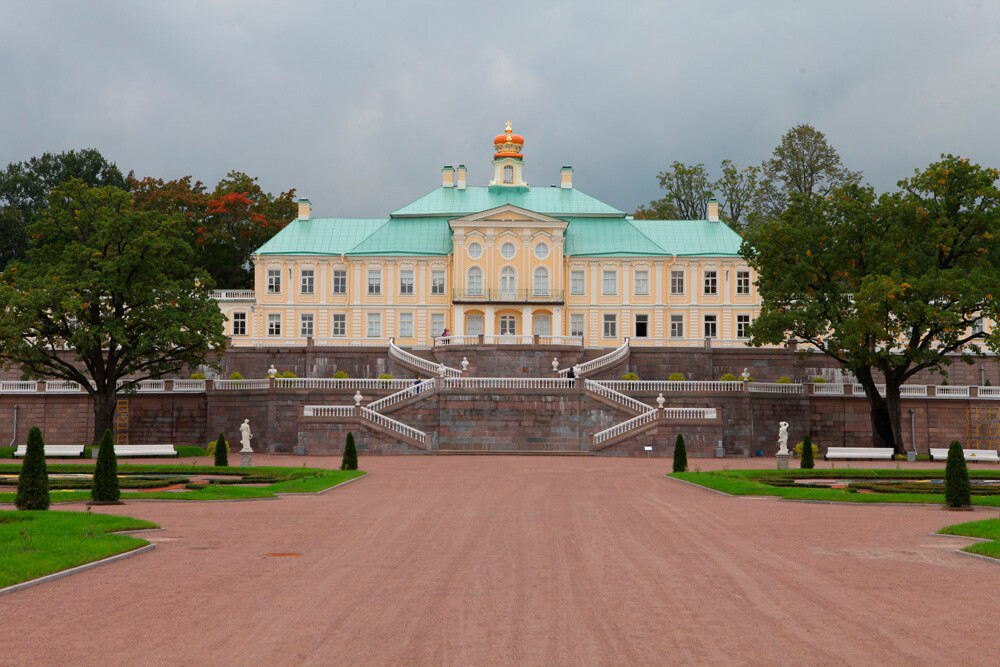 The Grand Menshikov Palace in Oranienbaum

In the middle of the 18th century Emperor Peter III built a "fun" fortress, Peterstadt, and a small palace, also in Oranienbaum. 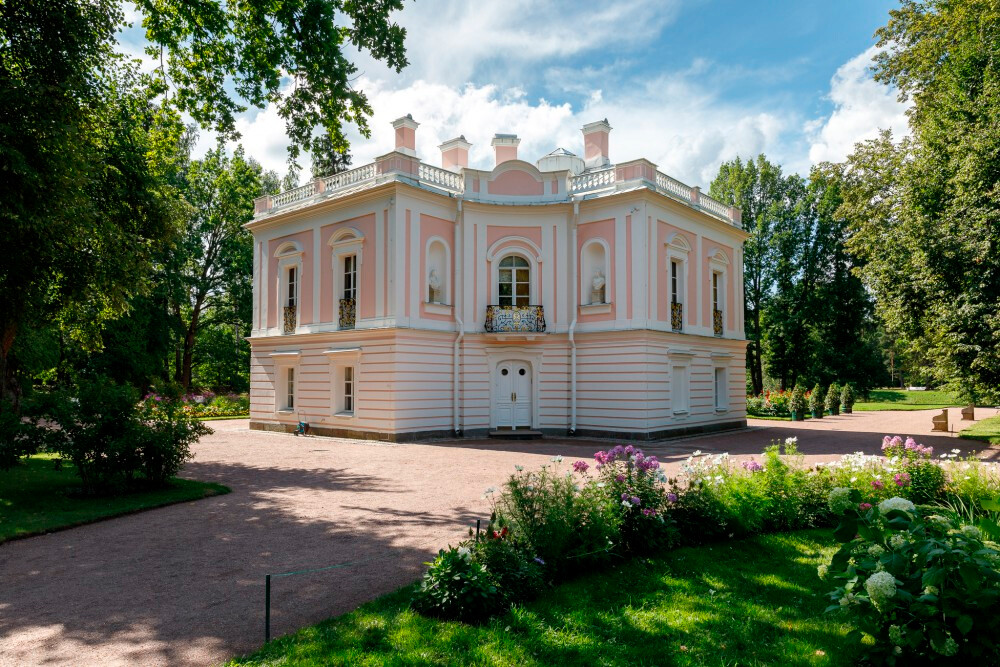 Palace of Peter III in Oranienbaum

Not far from here is also Catherine the Great’s private dacha, The Chinese Palace, which is a genuine architectural marvel. 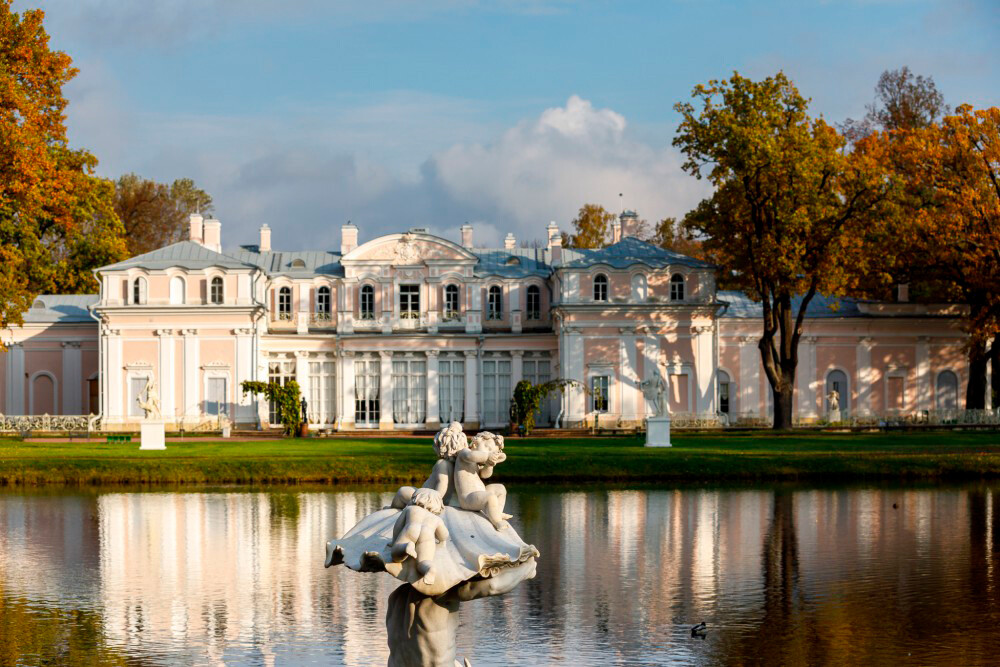 The Chinese palace in Oranienbaum

In addition, like the road from Paris to Versailles, the road from St. Petersburg to Peterhof became a grand thoroughfare on which the most important nobles built their dachas.

After the 1917 revolution, the Bolsheviks preserved the royal residence and established a museum in Peterhof. In September 1941 it was occupied by the Germans, and until the lifting of the siege of Leningrad in January 1944, Peterhof was under constant bombardment. In fact, the Grand Palace was turned into ruins. Tremendous damage was done to the park and fountains. 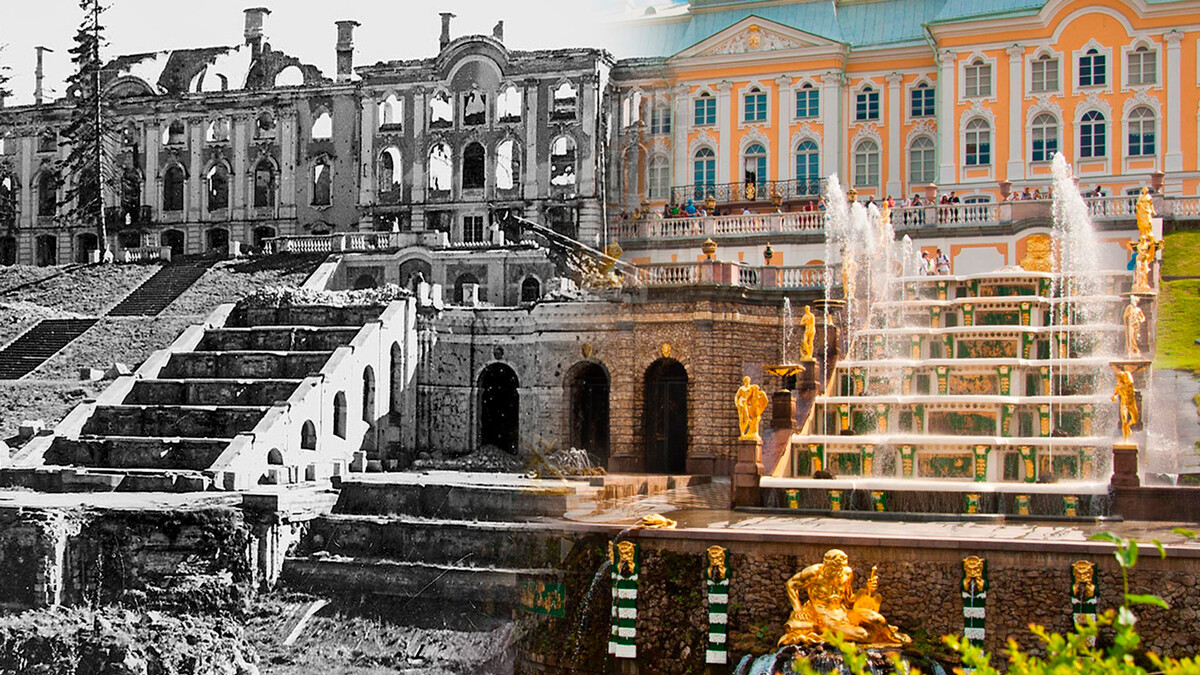 Some of the fountain sculptures were hidden or removed in advance, but many of those that remained were destroyed or lost without a trace. The invaders burned a huge number of trees, and while retreating they mined the park. In addition, the Nazis looted many of Peterhof's treasures, including the grand Neptune Fountain. However, in 1948, the composition was found and returned to its historic location. At the same time, the iconic Samson Fountain was lost and had to be restored anew. 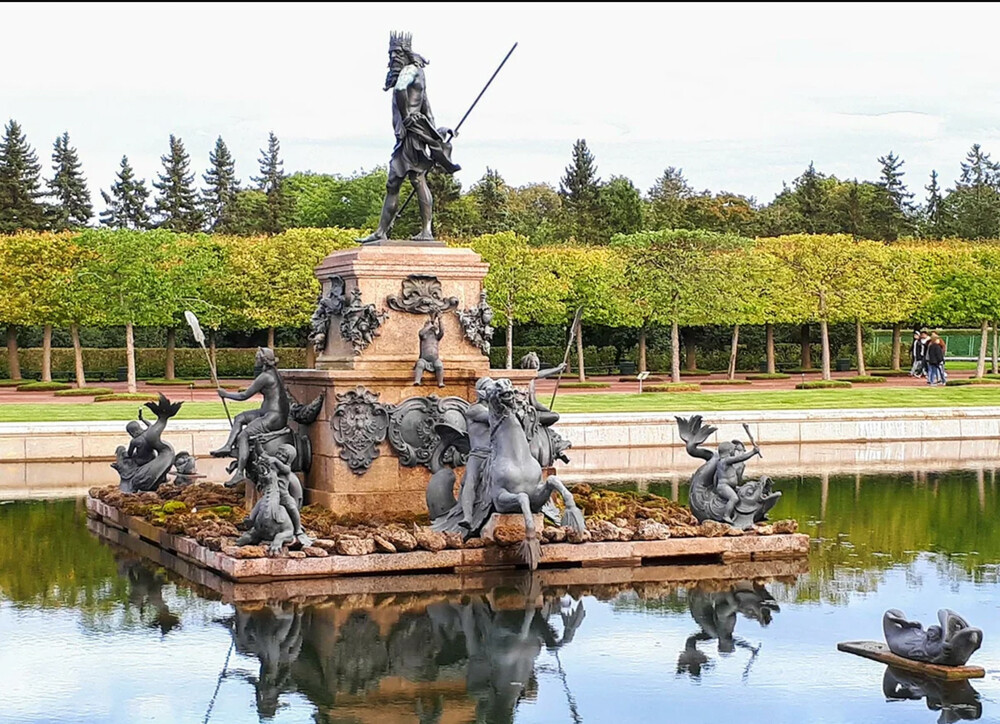 Peterhof began to be restored immediately after the lifting of the Siege, and by the summer of 1945 it was open to visitors. Toward the end of the 1950s the fountains were fully repaired and running again. Nevertheless, the restoration of individual objects of the palace and park ensemble continues to this day. 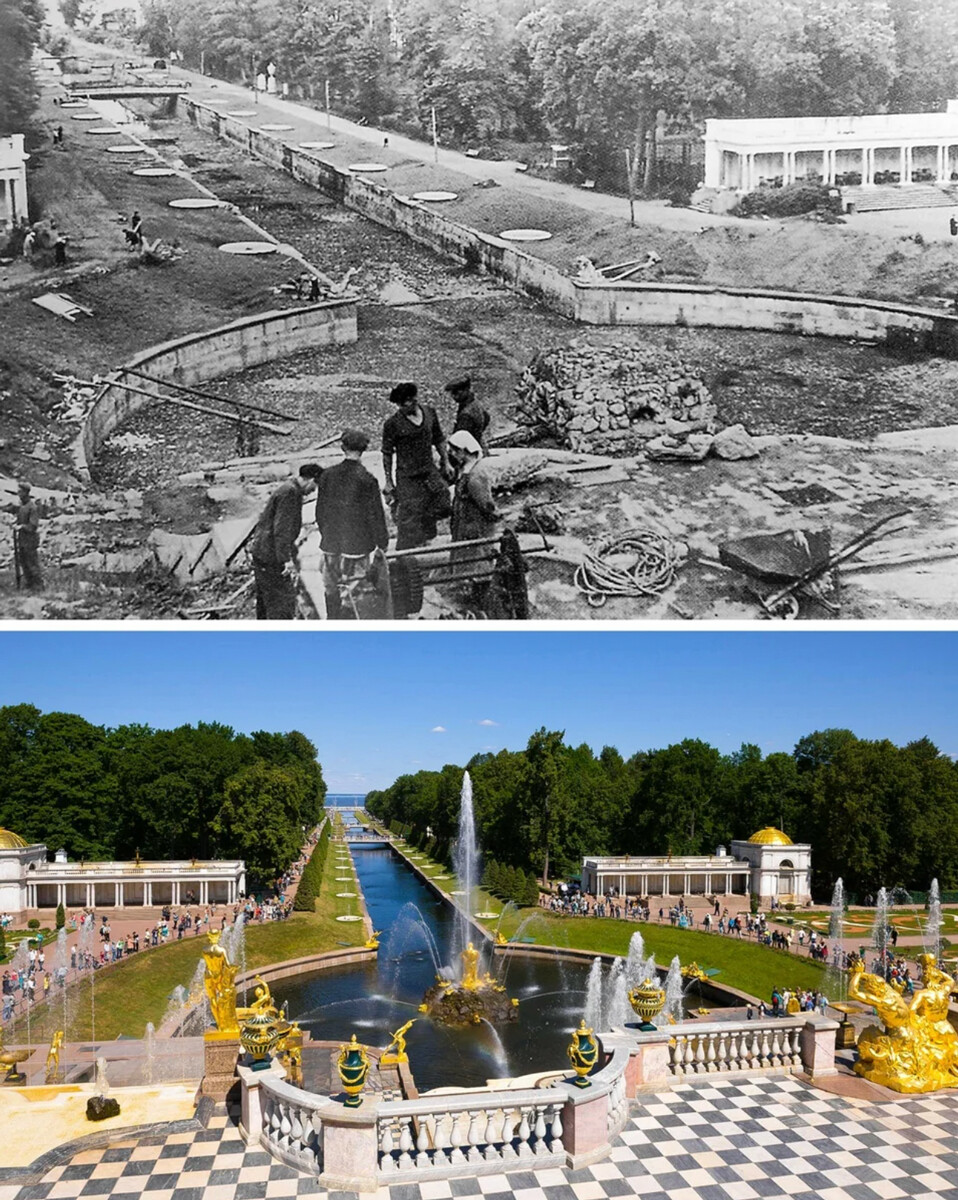