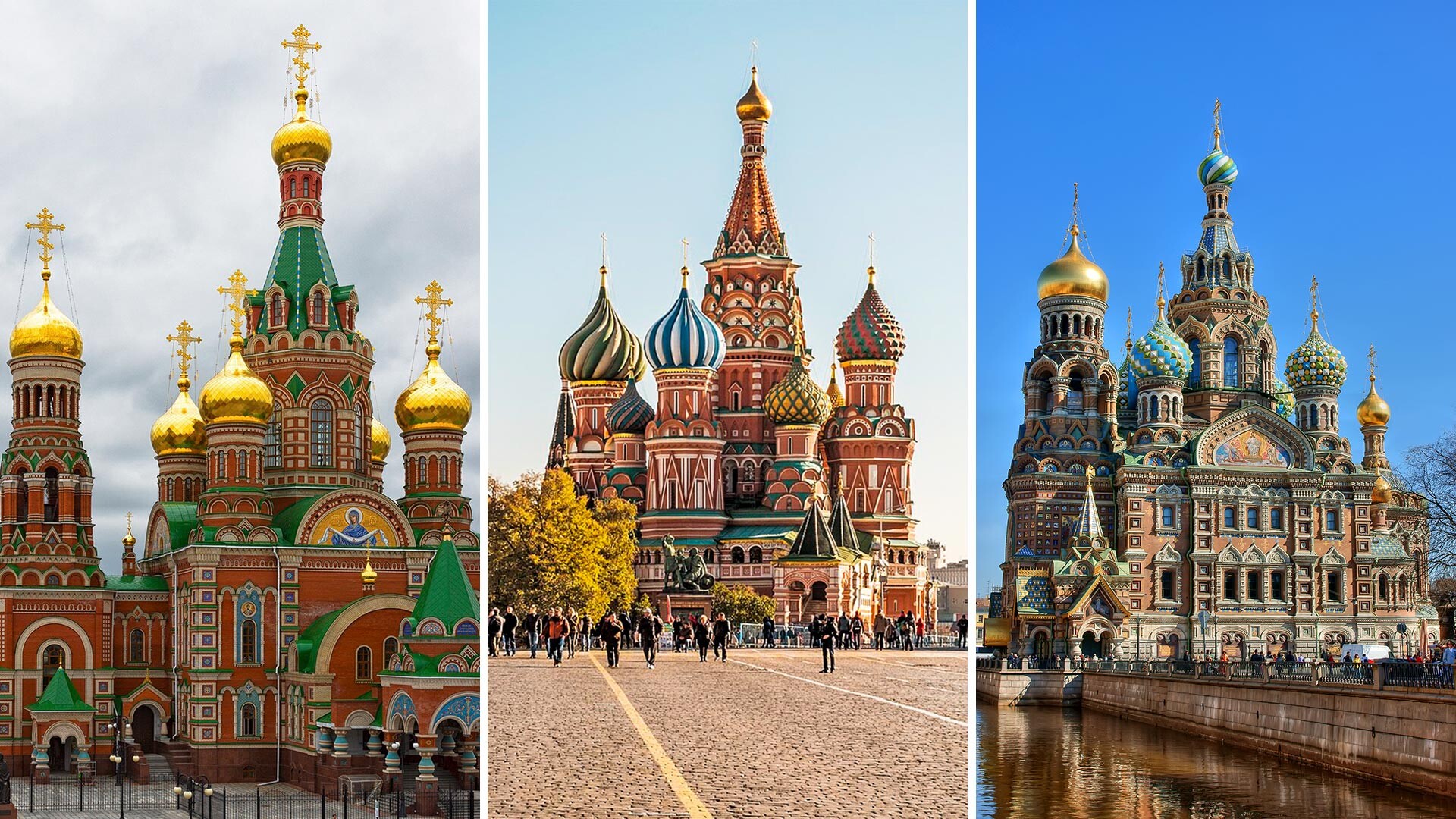 Shchipkova Elena, Tsy1980 (CC BY-SA 4.0); Legion Media
Russia’s most famous church has a number of “doubles”, and some are so similar that you could be forgiven for confusing them!

Today, St. Basil’s Cathedral is one of the most recognizable buildings in Moscow and all of Russia, and by far the most popular place for tourists to visit. The cathedral was built by order of Tsar Ivan the Terrible in the middle of the 16th century, and construction coincided with the Russian conquest of the city of Kazan and the subjugation of the entire Khanate of Kazan and its absorption into the Tsardom of Muscovy. 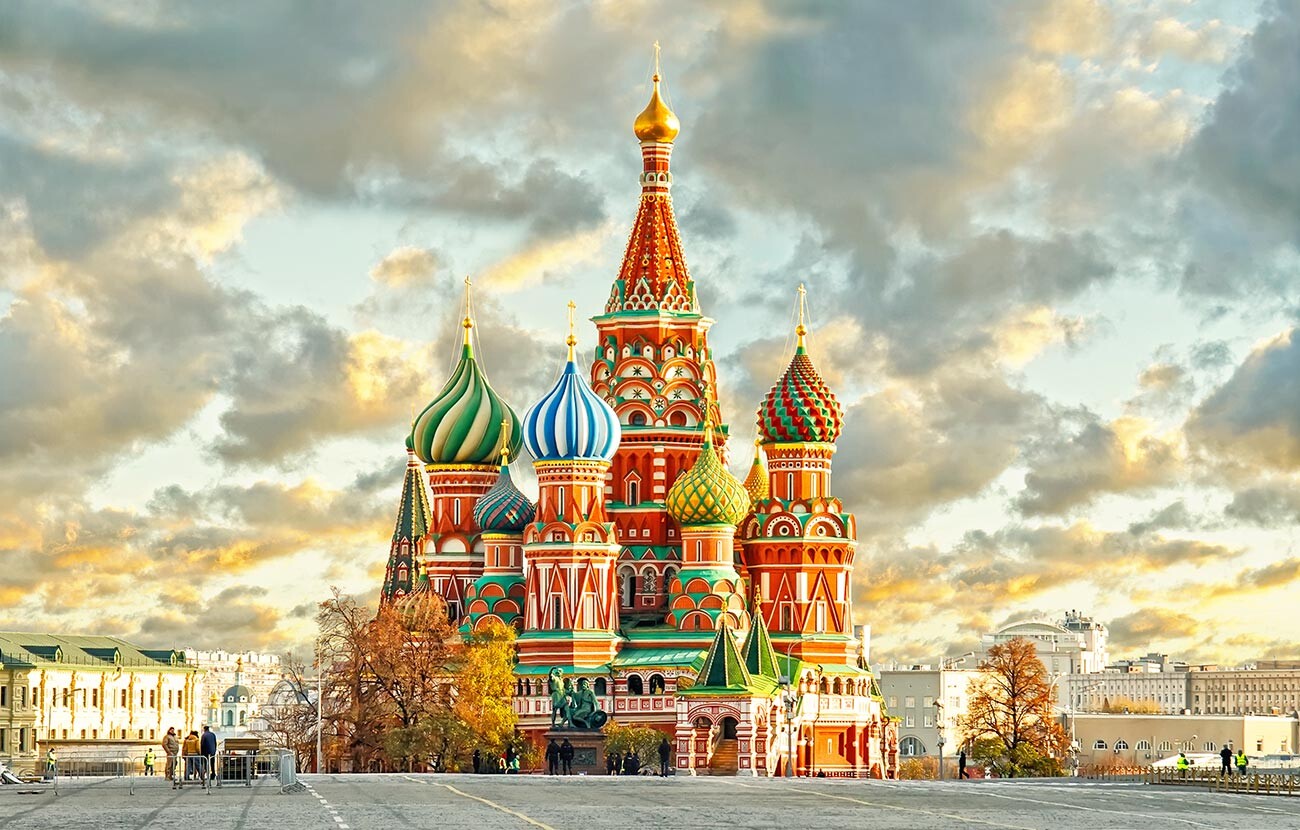 At the end of the 19th century, St. Basil’s Cathedral set a trend for the so-called “Russian Style” of architecture – the extensive use of red brick, colorful ornamental elements, kokoshniks (a type of corbel), and carved décor. According to modern architects, the look of the cathedral is so familiar to modern Russians that it literally has established aesthetic preferences (and a  love for everything bright).

Of course, such a significant historical landmark couldn’t escape “copycats.” At least three other churches in Russia have obvious references to Moscow’s most famous cathedral, and there’s an equal number abroad.

1. The Church of the Savior on Spilled Blood in St. Petersburg 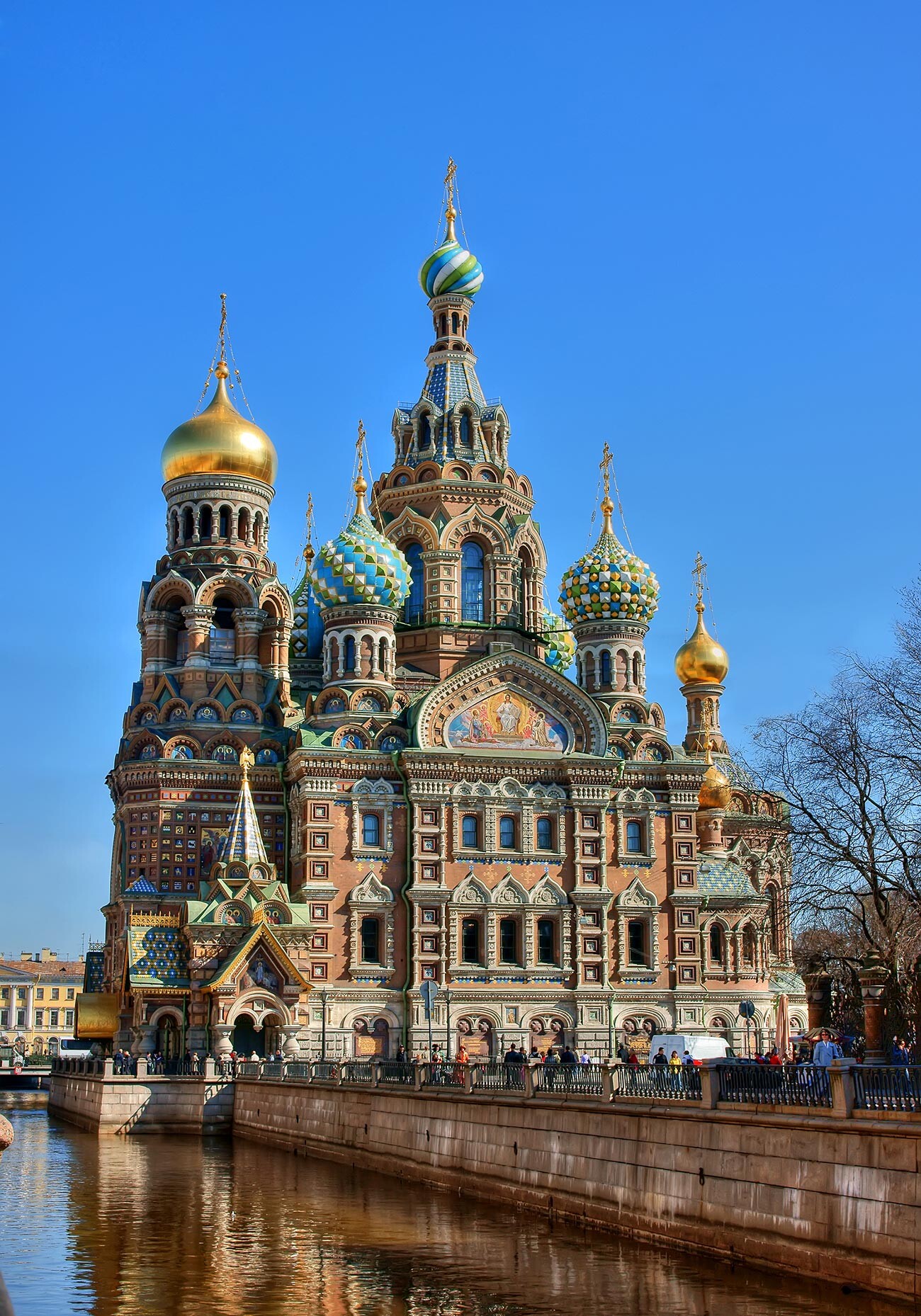 Look at the manifold colorful domes, carved platbands, conical tented roofs and kokoshniks. When taking a quick look at its photo from different angles, you could easily mistake this St. Petersburg church for its older Moscow brother. The Church of the Savior on Spilled Blood really stands out against the Baroque and Neoclassical look that tends to dominate most of St. Petersburg’s historical center. The church was built in 1883-1907 on the very same place where Emperor Alexander II was assassinated; his carriage was blown up by terrorist revolutionaries.

The son of the deceased Tsar, Alexander III, personally wished for the church to reference medieval Russian church architecture. Naturally, the church had a special meaning for the new Tsar, and he personally reviewed and approved the church’s design.

2. Soothe My Sorrows Church in Saratov 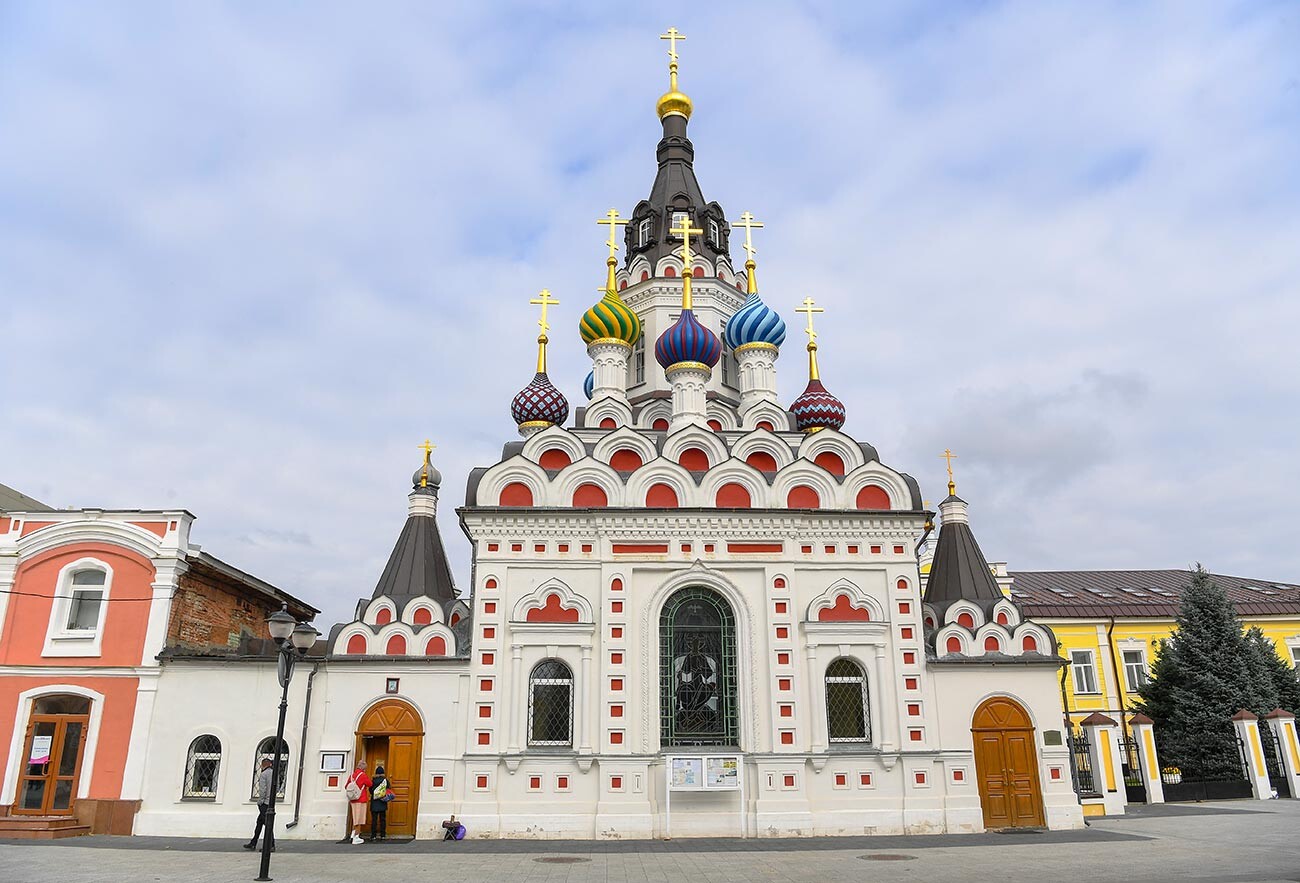 This church is dedicated to the Mother of God icon, “Soothe My Sorrows”, and was built in 1904-1906. Russia has many other churches decorated with a lot of zakomara arches, but the abundance of small colorful domes on this one certainly references St. Basil’s Cathedral. If in other churches the number of domes corresponds to the number of chapels, here they have a purely decorative function – the church has always had only one altar (but another was built in the 1990s). By the way, during Soviet times the church was used as a planetarium!

3. The Church of St. Igor of Chernigov in Moscow 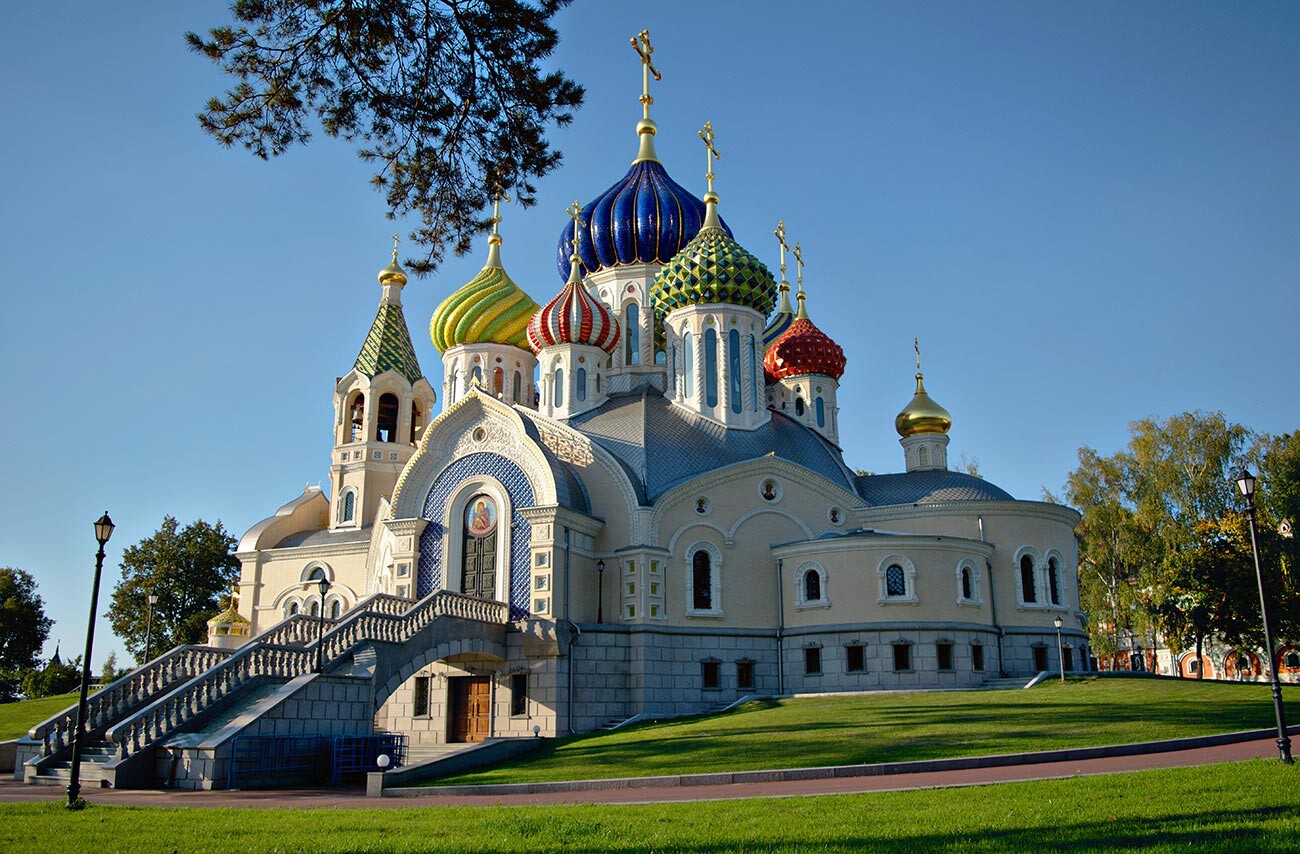 This church in Novo-Peredelkino is brand new, built in 2009-2012 and is situated not far from the summer residence of the Patriarch of Moscow and All Russia. The church is built in the Neo-Russian style and, combining elements of different church architecture styles, looks like a fairy tale palace. The colorful domes are made of porcelain and are crowned with massive crosses. Perhaps the architects didn’t deliberately try to copy St. Basil’s Cathedral, and there’s no deliberate abundance of decorations or large numbers of kokoshniks; nevertheless, the resemblance is quite obvious.

4. Cathedral of the Annunciation of the Blessed Virgin Mary in Yoshkar-Ola 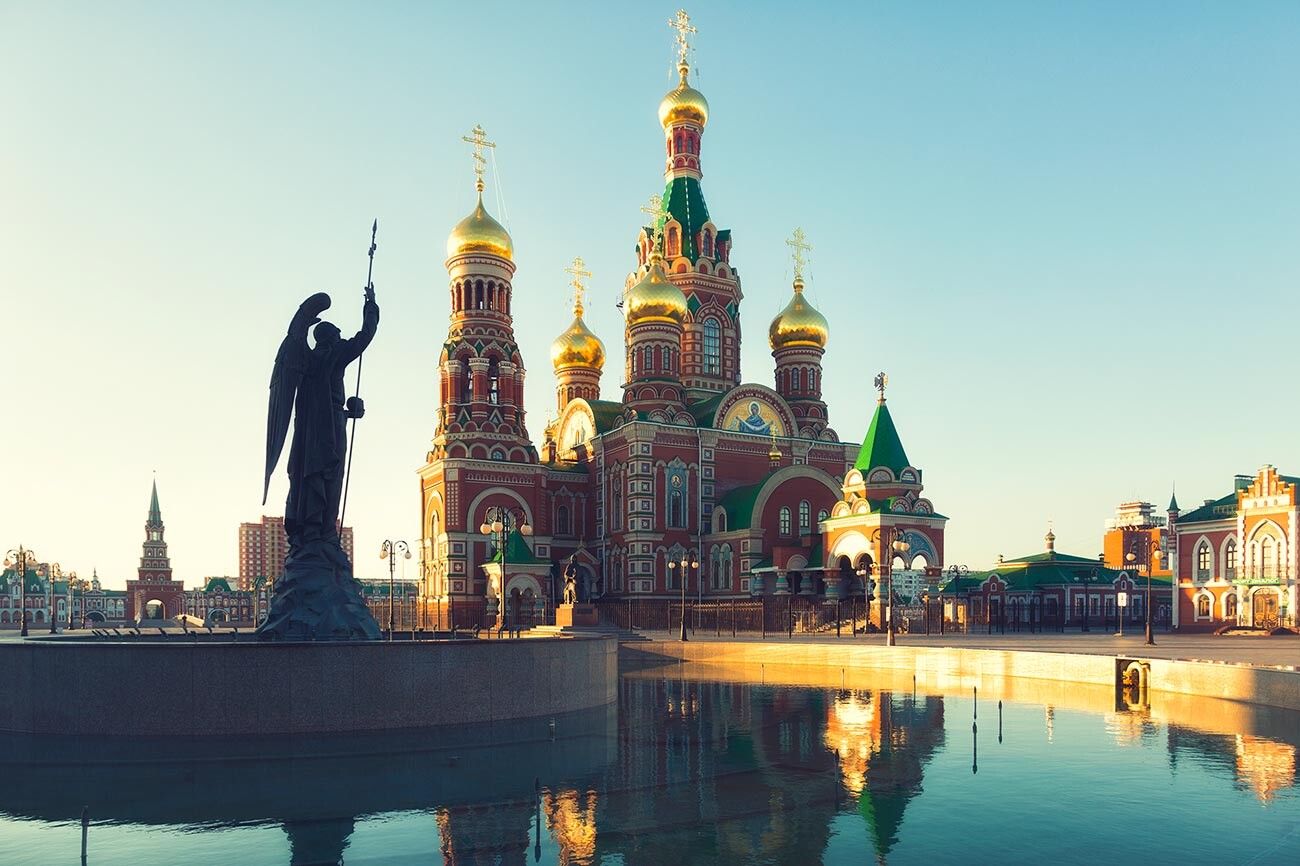 In 2016, the Annunciation Cathedral opened in the capital of the Mari El Republic. Its domes are not colored but golden. The overall architectural style simultaneously makes reference to both St. Basil’s Cathedral and the Church of the Savior on Spilled Blood. In general, Yoshkar-Ola is known for copies – there’s one of the Spasskaya Tower in the Moscow Kremlin, a copy of the Kremlin wall, and even an embankment that is reminiscent of Bruges in Belgium. 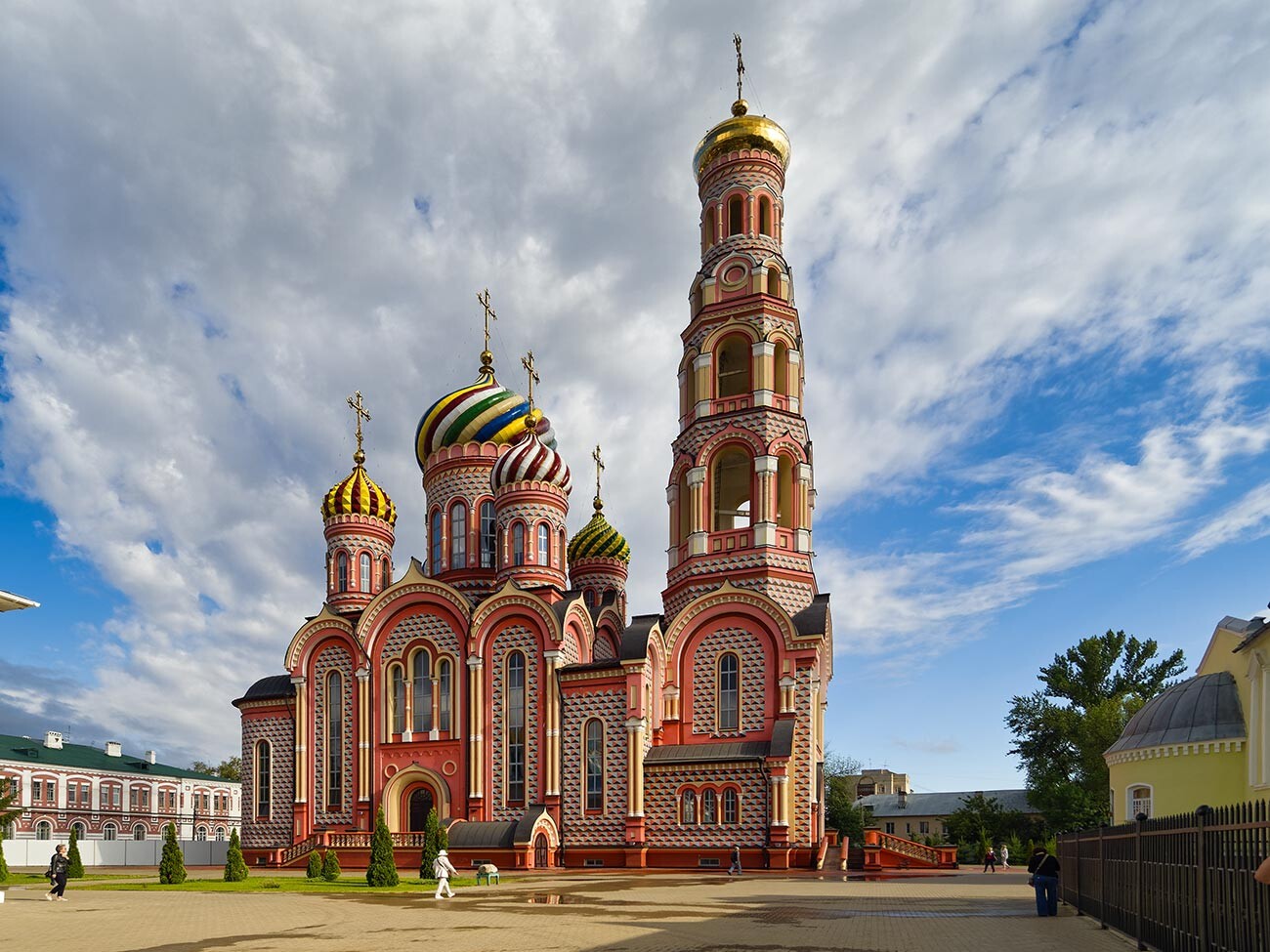 The main church of the Ascension Convent in Tambov was destroyed during Soviet times. But in 2007, a new elegant church was built in its place with a 70-meter-high bell tower. Foreigners often compare the original St. Basil’s Cathedral to Disneyland, but this colorful cathedral fits the comparison even better. 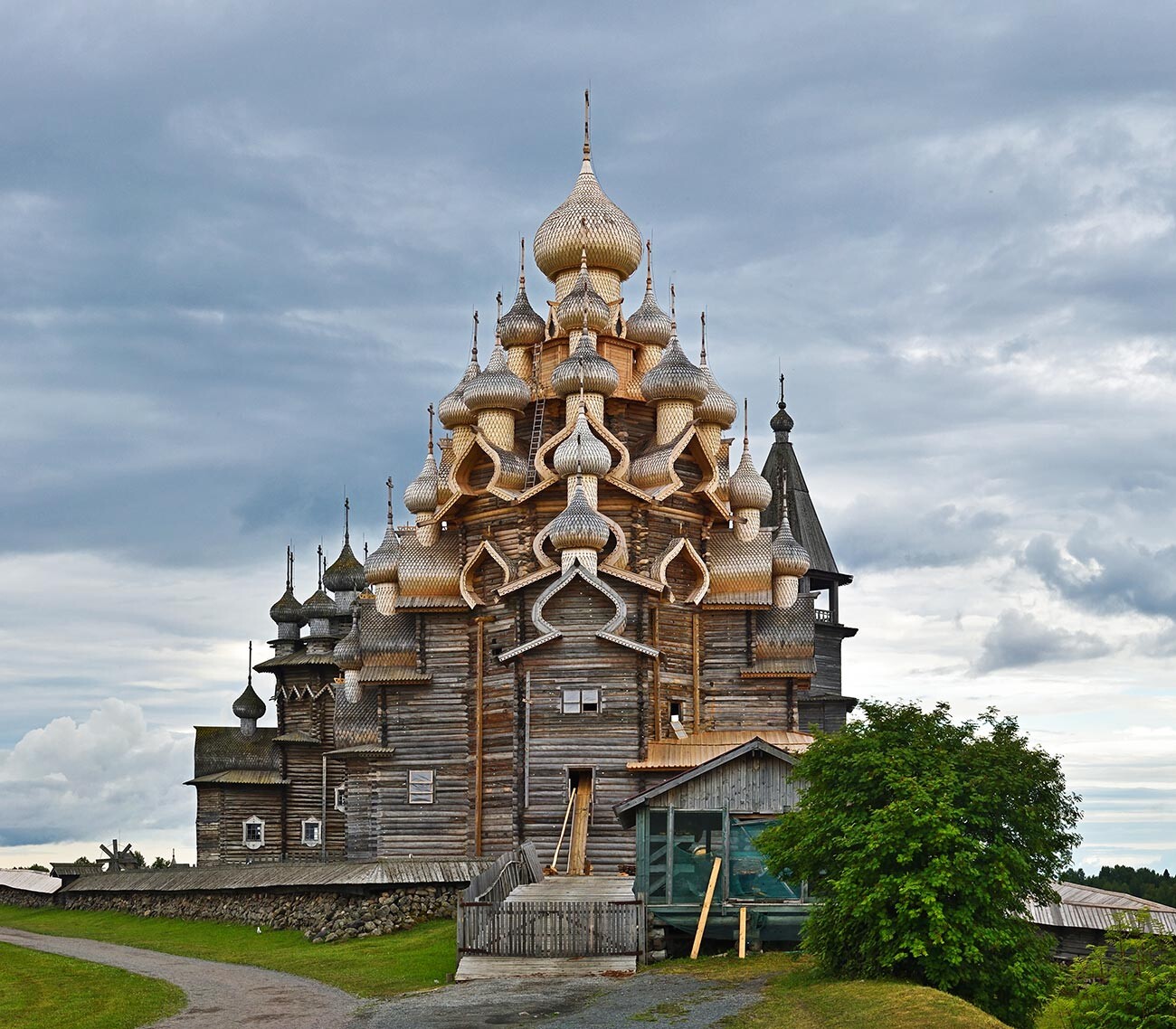 With a bit of imagination you can discern a similarity with St. Basil’s Cathedral even in Russia’s most famous wooden church – the Transfiguration Church on Kizhi Island in the Republic of Karelia. This astonishing church was built at the beginning of the 18th century without a single nail. By the way, it has 22 domes, twice as many as St. Basil’s Cathedral. Every dome lies on a different level on the foundation of a bochka (barrel) roof that resembles a bulb or a kokoshnik.

BONUS. Copies in other countries 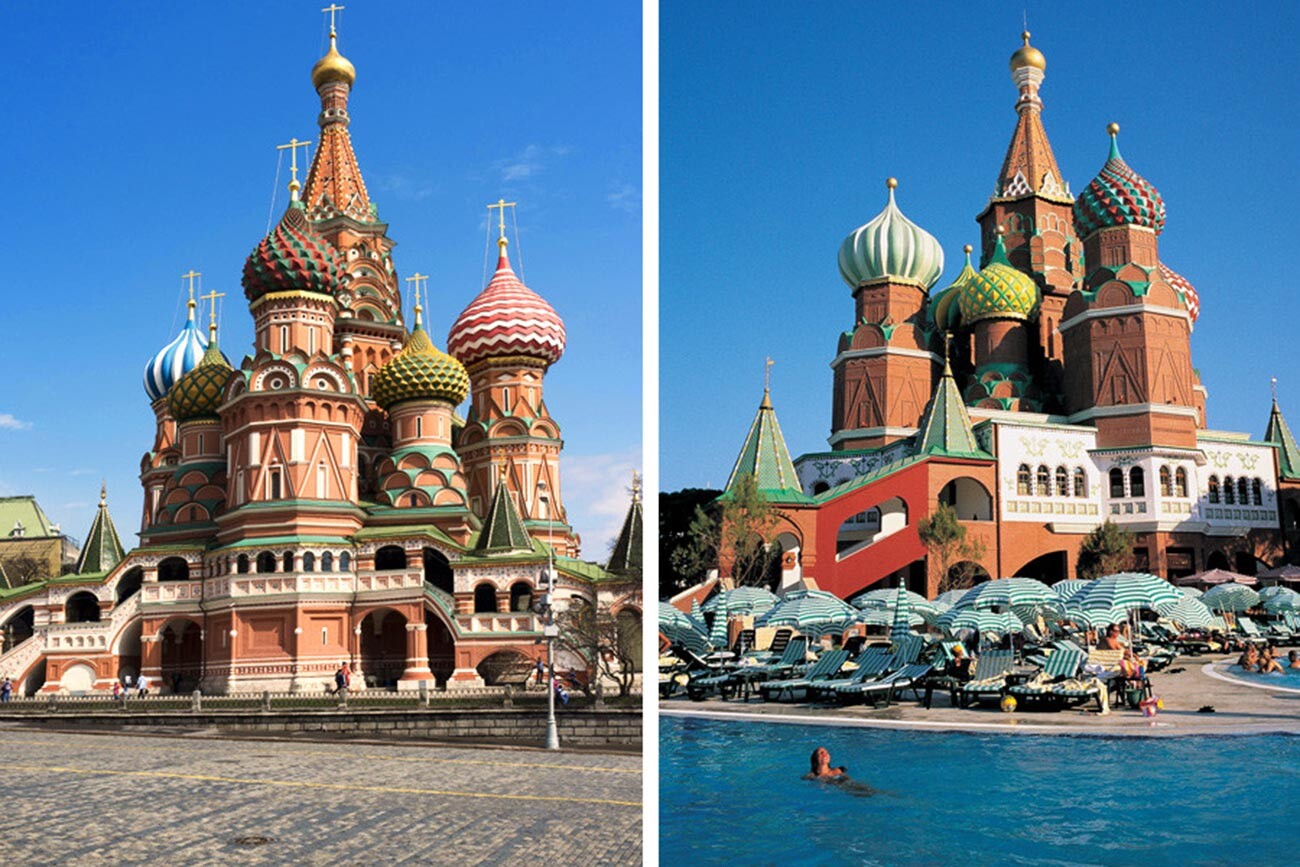 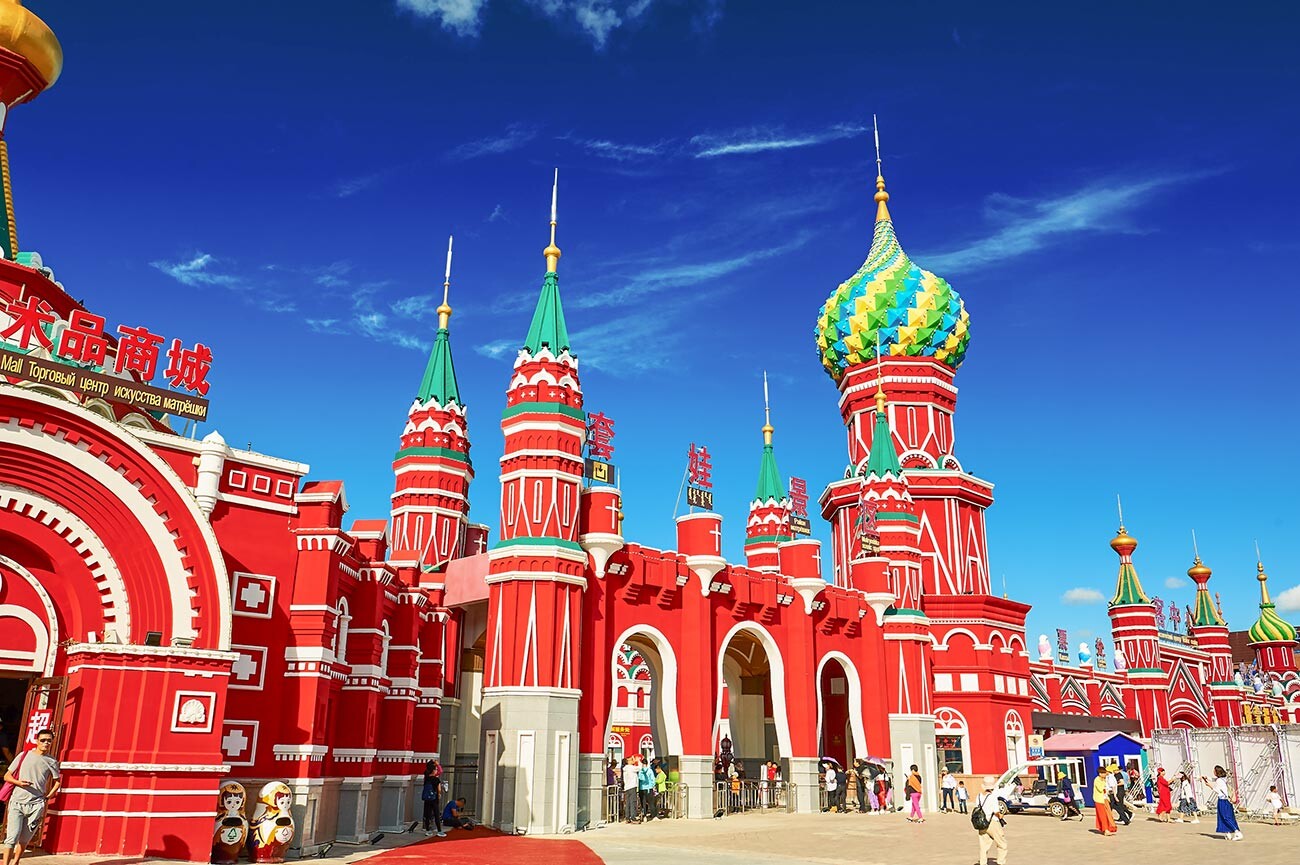 The colorful domes of St. Basil’s Cathedral were recreated (in quite a freestyle) on the Matryoshka Square in the Chinese city of Manzhouli, not far from the border with Russia. 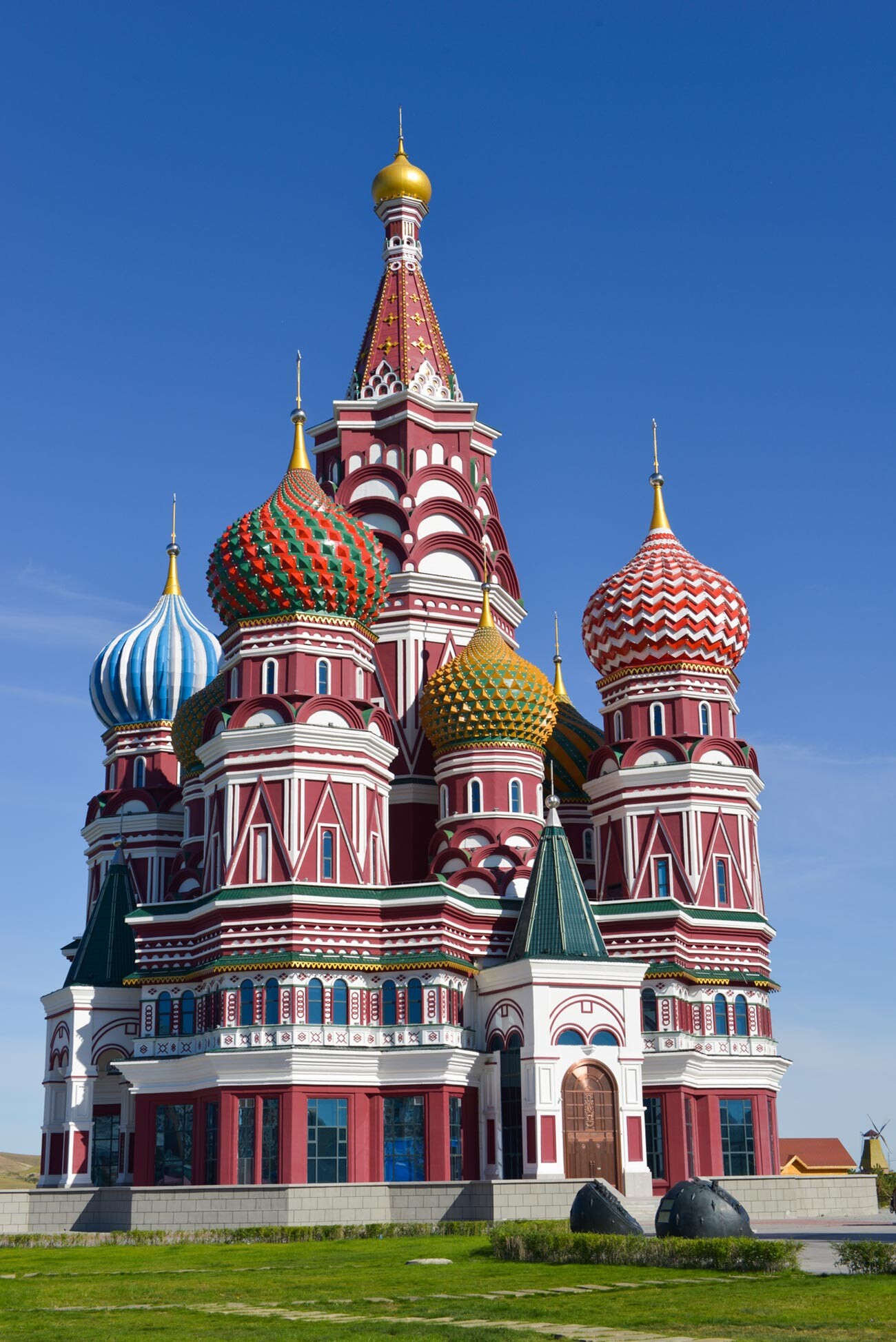 A replica of Moscow's St. Basil's Cathedral used as a science museum in Jalainur, China

Finally, there’s another 'copycat' in the neighboring Chinese city of Jalainur.