The carriages of the Russian tsars (PHOTOS) 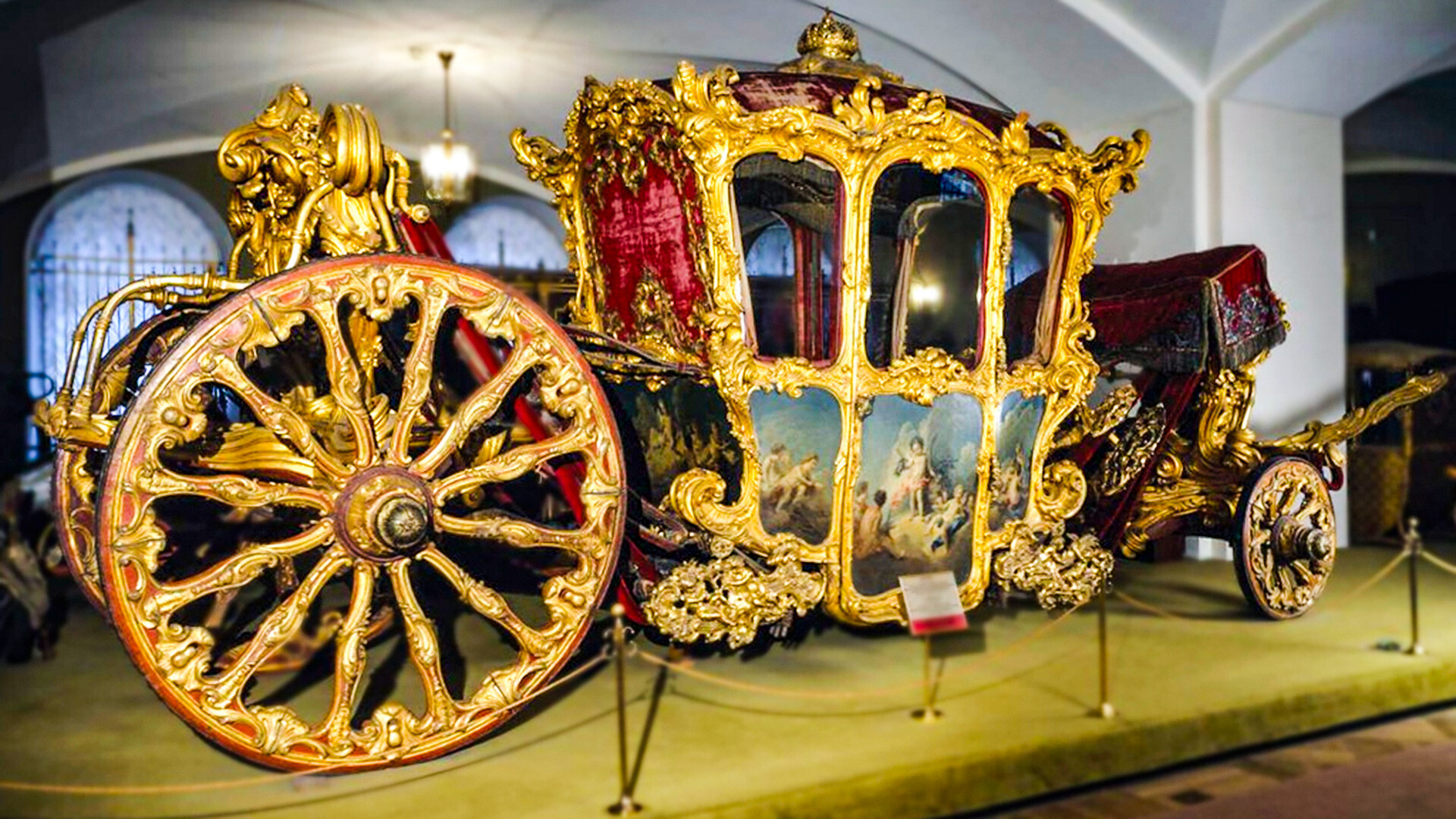 Moscow Kremlin Museums
The “garages” of the imperial palaces hosted great collections of carriages for every occasion. Here are just a few of them.

During Medieval times and the pre-Peter era, tsars usually traveled in heavy, closed coaches, quite simple in their design, with no special extravagances in their décor. They were called kolymaga – to this day in the Russian language, this word is jokingly used to describe heavy, clumsy vehicles. 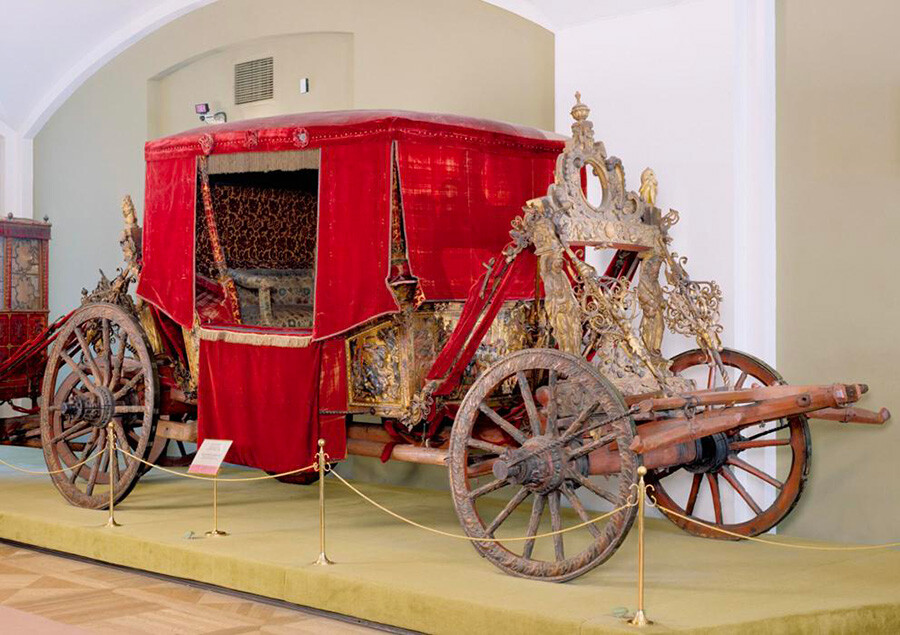 This is one of the oldest surviving carriages (and one of the first that could be called luxurious). Decorated with velvet, golden threads and pearls, this carriage was built at the end of the 16th – beginning of the 17th century in England, known for coachbuilding. In 1603, English King James I presented such a kolymaga to Russian Tsar Boris Godunov. 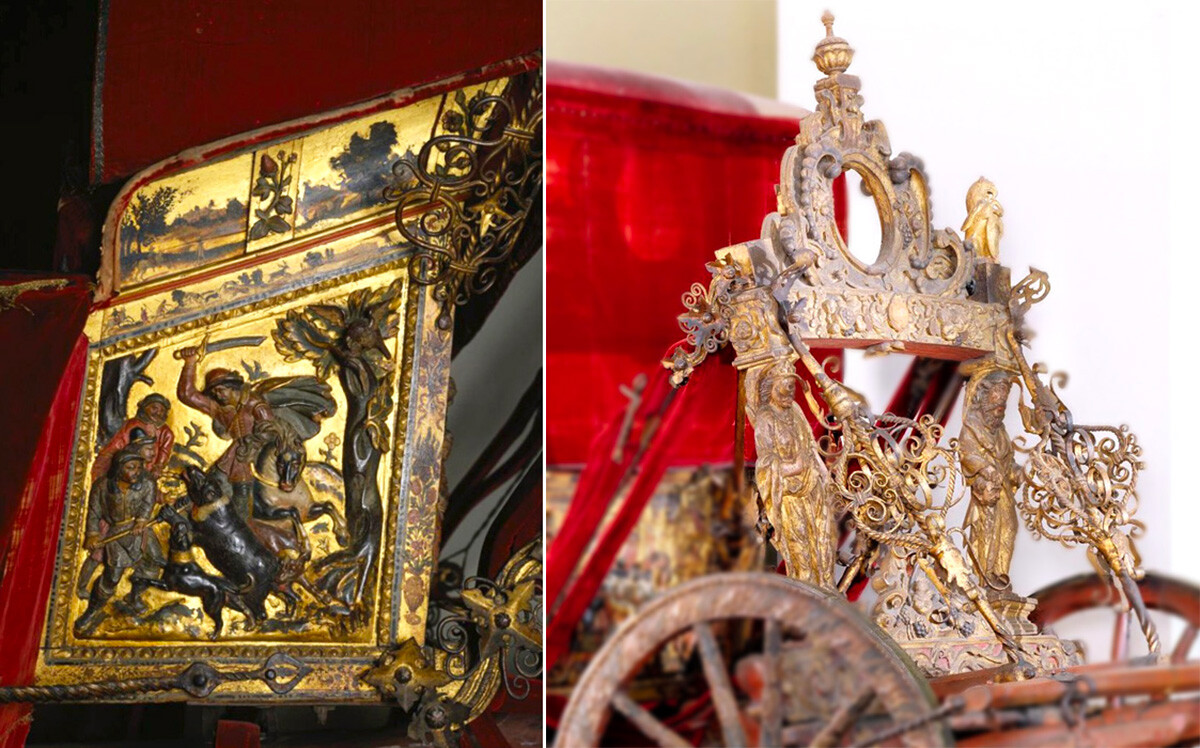 The carriage’s sides feature multi-figure relief compositions. Its wheels and the sculpture compositions over the wheels are also distinguished by masterful carving and décor. 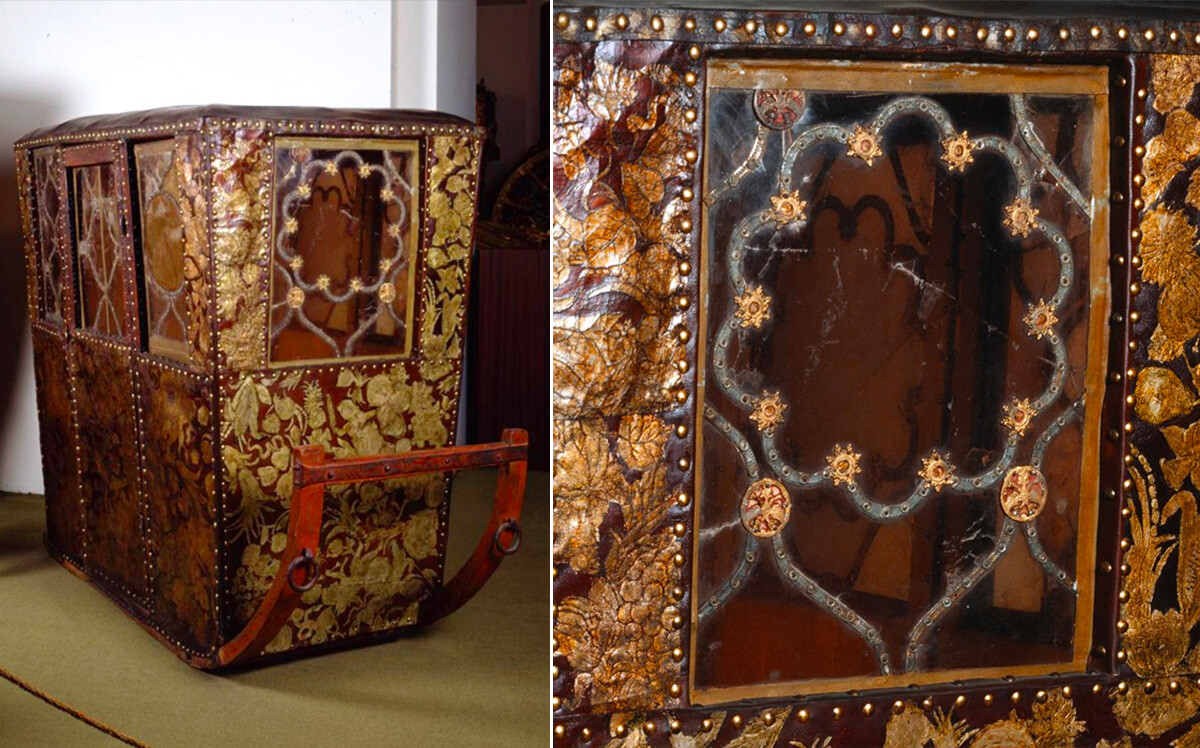 During winters, sleighs were used to travel around. For long travels, tsars could have an entire caravan of closed sleighs – chests with clothing and religious icons, for example, traveled in separate sleighs. And the kids of Tsar Ivan V Alekseyevich (the brother of Peter the Great) drove around in this “amusing” sleigh. Its walls feature gilded ornaments and designs depicting flowers and exotic birds. Aside from that, carved windows from mica were made in the closed sleigh.

Winter sleigh of Peter the Great

Peter the Great was known for his asceticism and simplicity in everyday life. This modest small coach belonged to him. However, it was very maneuverable. Peter the Great saw such a design during his travels through Europe: the body of the coach was removed from the wheels and put on sleigh runners, so the same coach was used throughout the year. 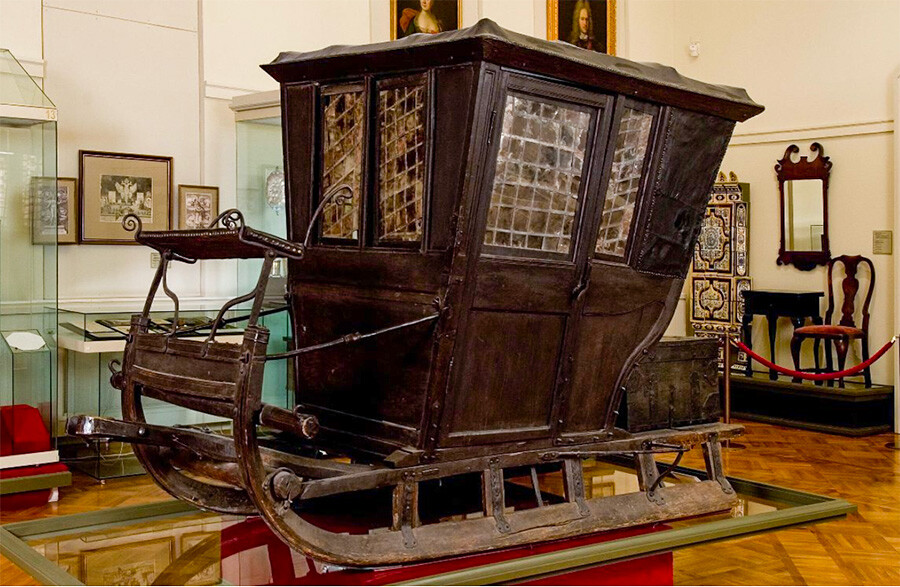 At the beginning of the 18th century, when St. Petersburg was built and the capital was moved there, Russia strove for Europeanization. Then, the ceremony of grand departures of the royalty in luxurious carriages – true masterpieces that were ordered from the best European craftsmen – emerged. Later, a large number of Russian artisans also appeared, who took coachbuilding to the next level – and, gradually, the royalty stopped ordering from overseas. Elegant summer coupe coaches for two people gained a lot of popularity, as well as “berlines” – carriages for four people. 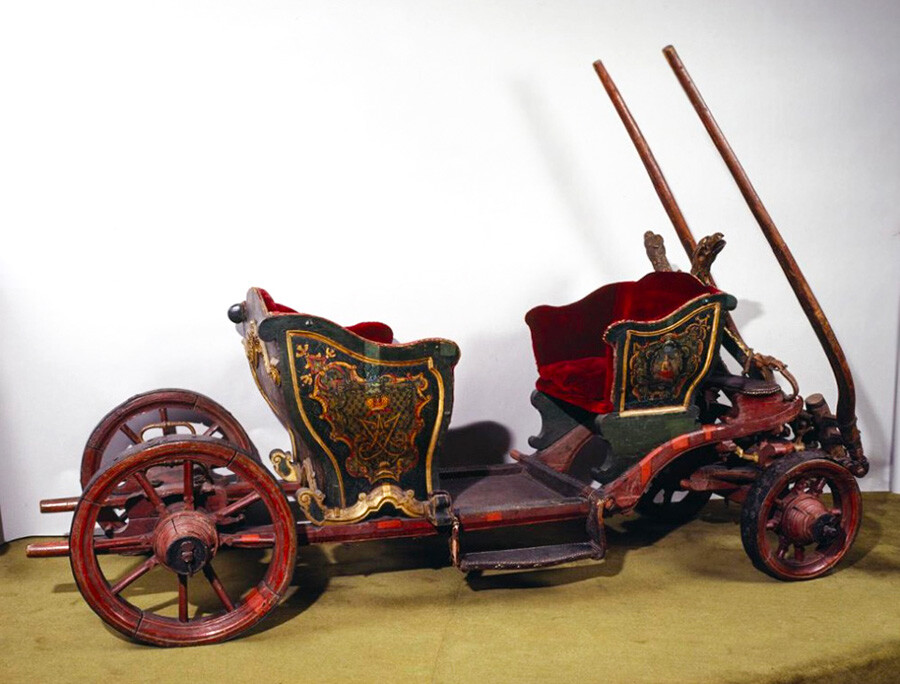 This small two-seat cart from redwood was built in the 1730s and belonged to Anna Ioannovna. However, the empress didn’t travel far in it, riding it exclusively in the palace park.

Elizabeth Petrovna was the main Russian aficionado of baroque and luxury. She owned a lot of carriages and all of them stood out for their abundance of décor, carving and gilding. For coronation celebrations in 1742, for example, this two-seat German carriage was used. 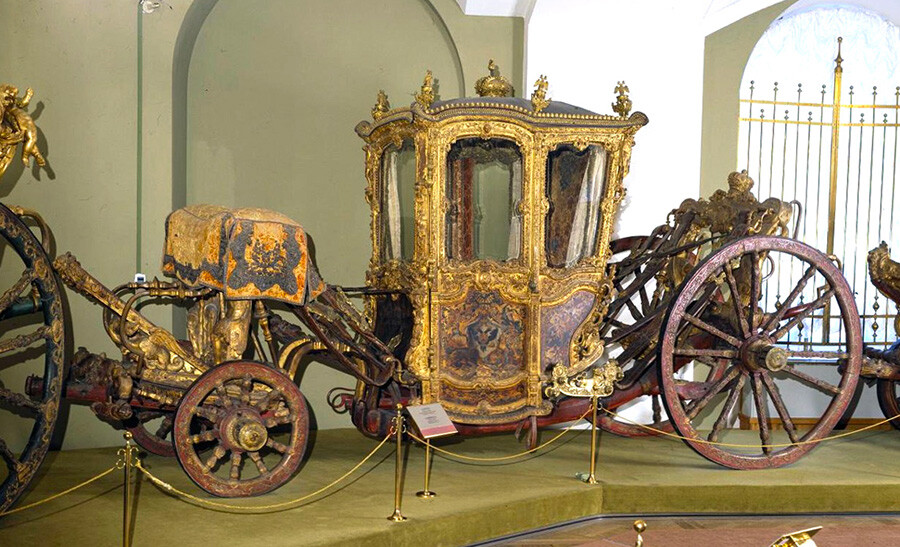 Decorations and paintings on the doors and the walls are especially interesting. Baroque angels and the imperial symbol – the two-headed eagle – are depicted on them. 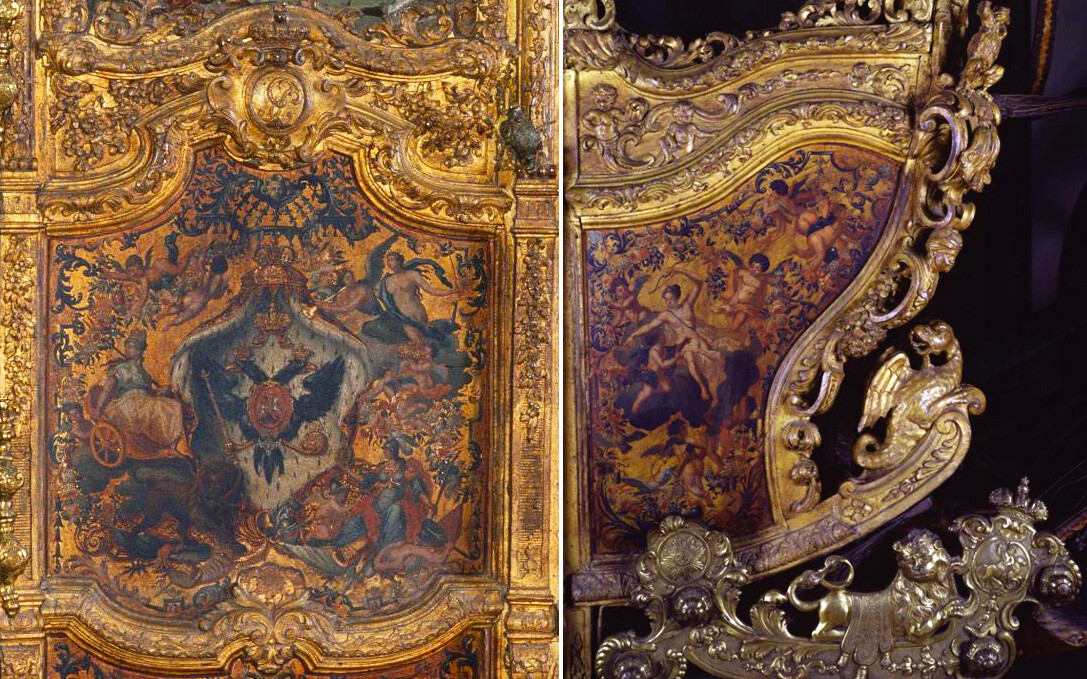 The most astonishing carriage made of maple and bronze was brought to Elizabeth at the beginning of the 1740s from Vienna. 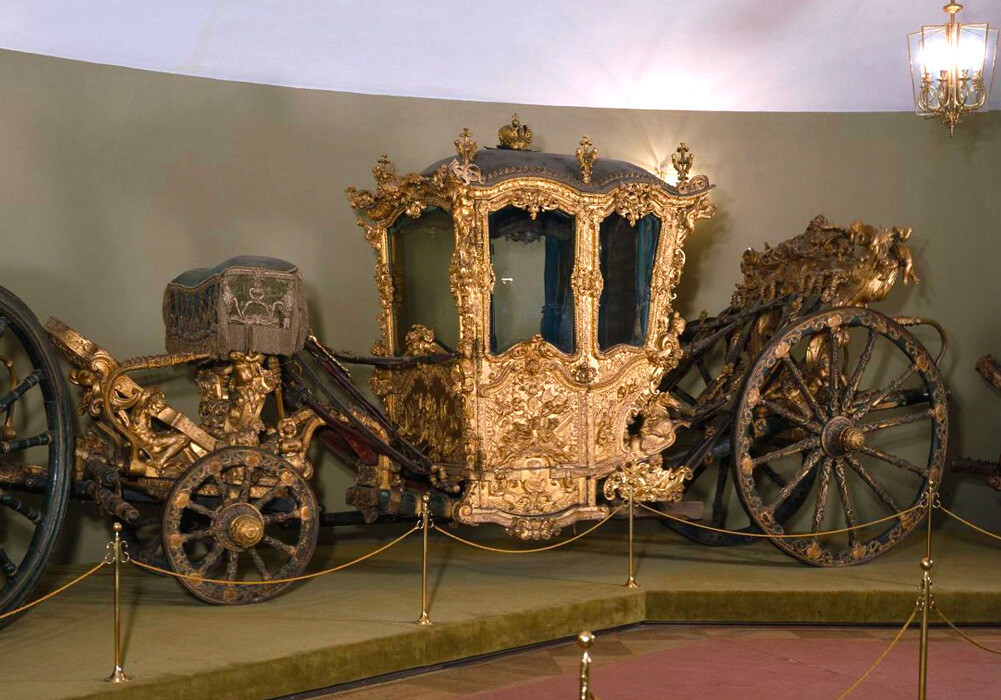 The main décor element of the carriage – a magnificent gilded wood carving.

This two-seat coupe carriage from German craftsmen was gifted to the empress by Prussian King Frederick the Great himself in 1746. 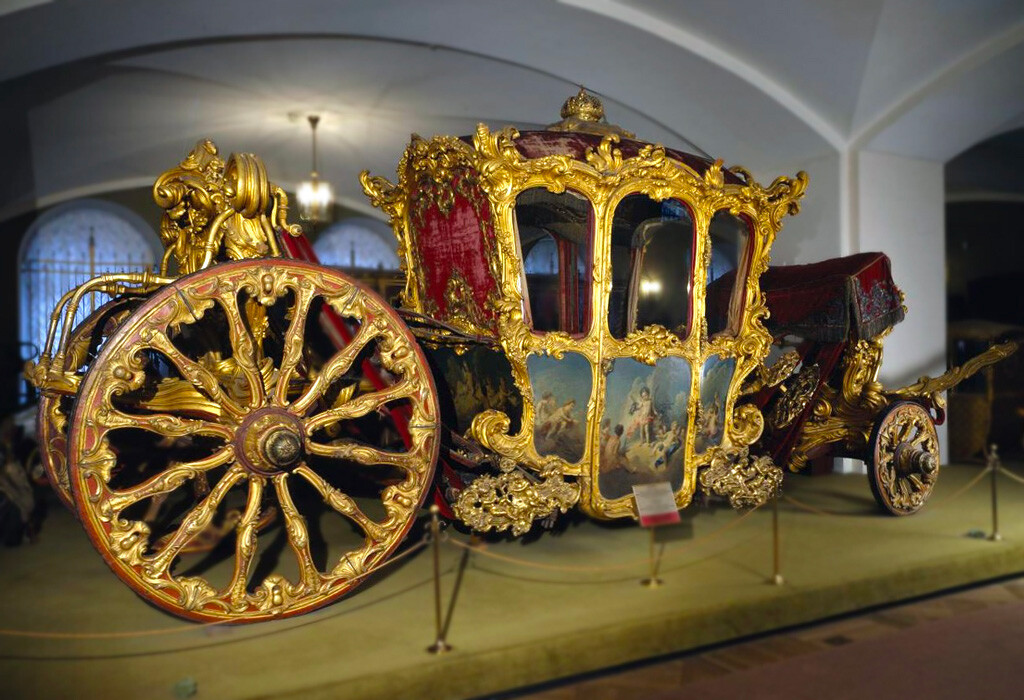 All luxurious carving aside, the carriage was especially distinguished for its beautiful panels that decorate the doors of the carriage. 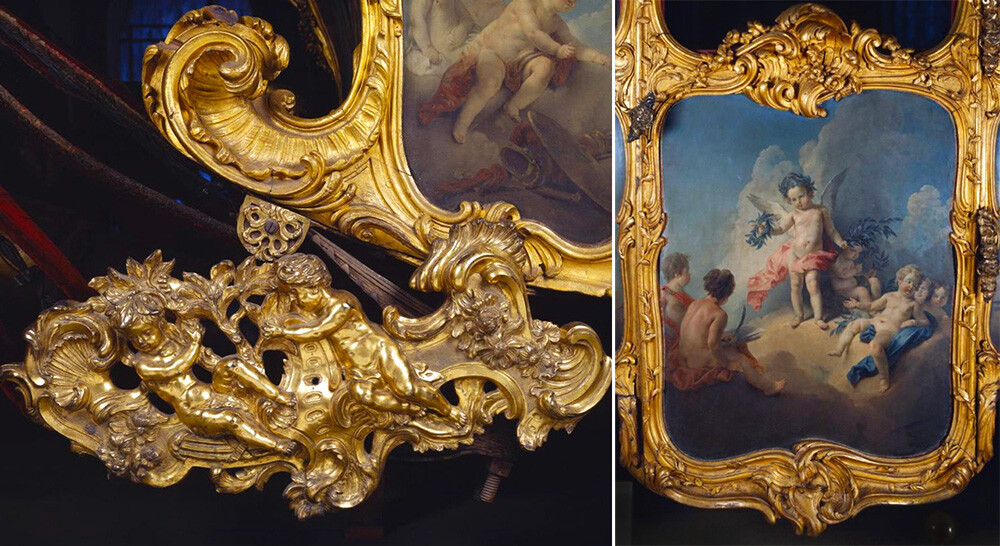 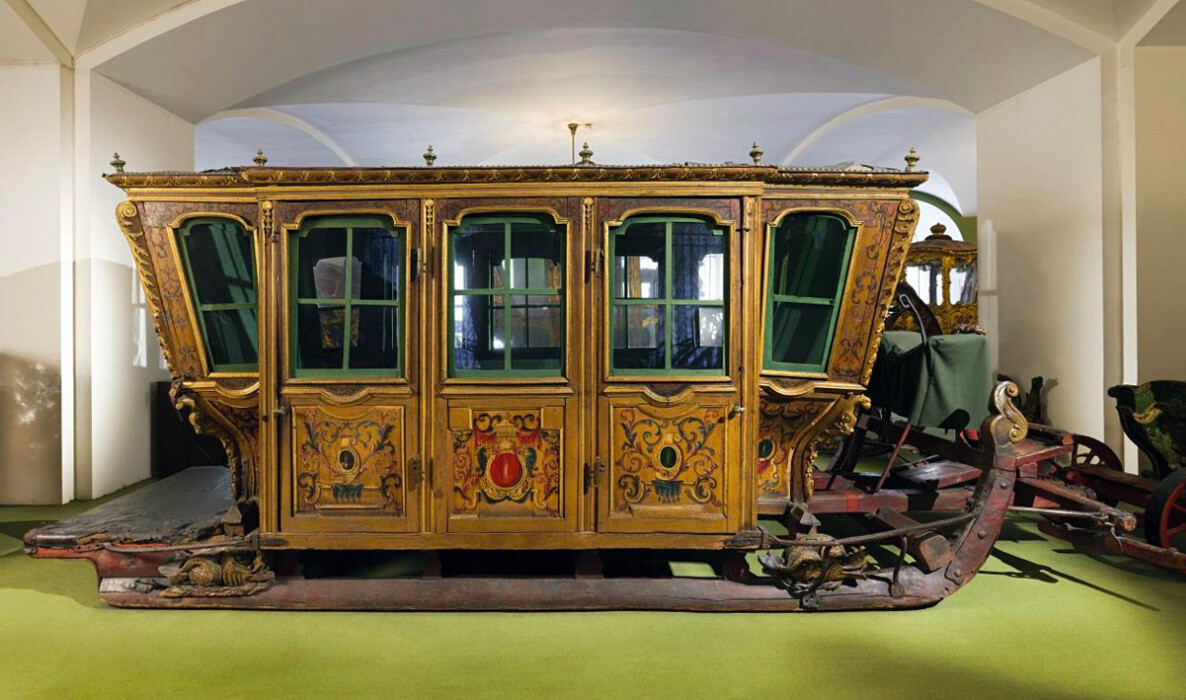 The daughter of Peter the Great, Empress Elizabeth Petrovna, traveled over snow and ice during long trips in this multi-seat closed sleigh. In such a carriage she, in a record three days, riding many horses to death, made it to the coronation from St. Petersburg to Moscow.

The carriage was built in the 1730s from oak and birch and oil-painted right over the wood.

Catherine the Great, German by nationality, thought that Elizabeth’s love for luxury was a squander. She preferred more modest décor, with classicism being her favorite style. Catherine the Great also traveled a lot, so she valued comfort above all else – this, for example, is what the empress’ travel carriage looked like. 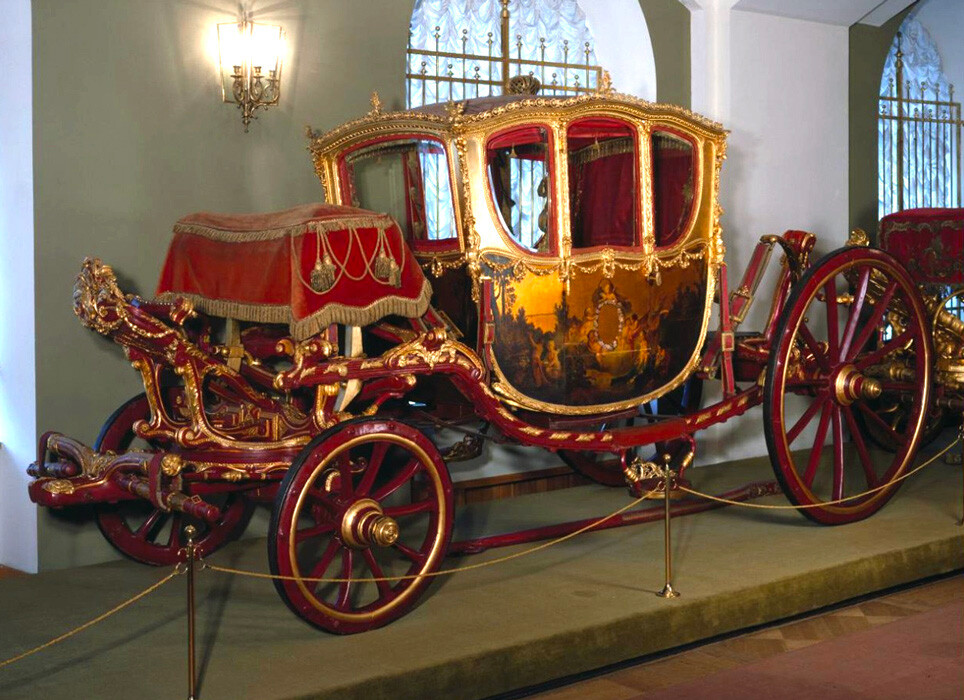 And this “berline” carriage (a four-seat convertible carriage) was built for Catherine the Great by court craftsman Johann Conrad Bukendal in 1769. Velvet, silk and leather were used in the upholstery; of course, the main feature of the carriage – its gilded wood carving. 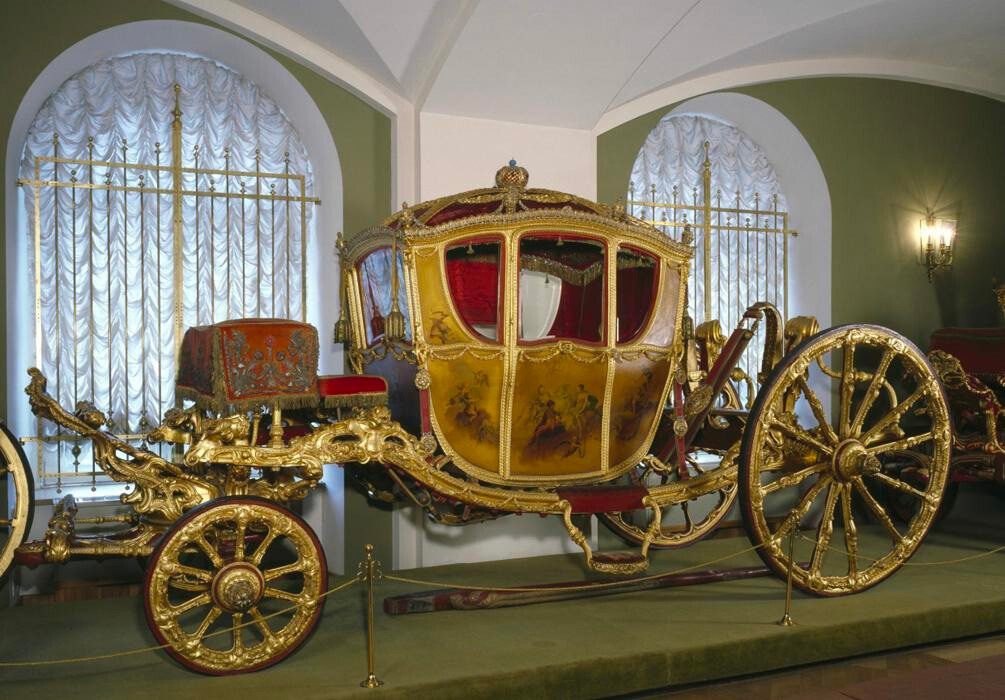 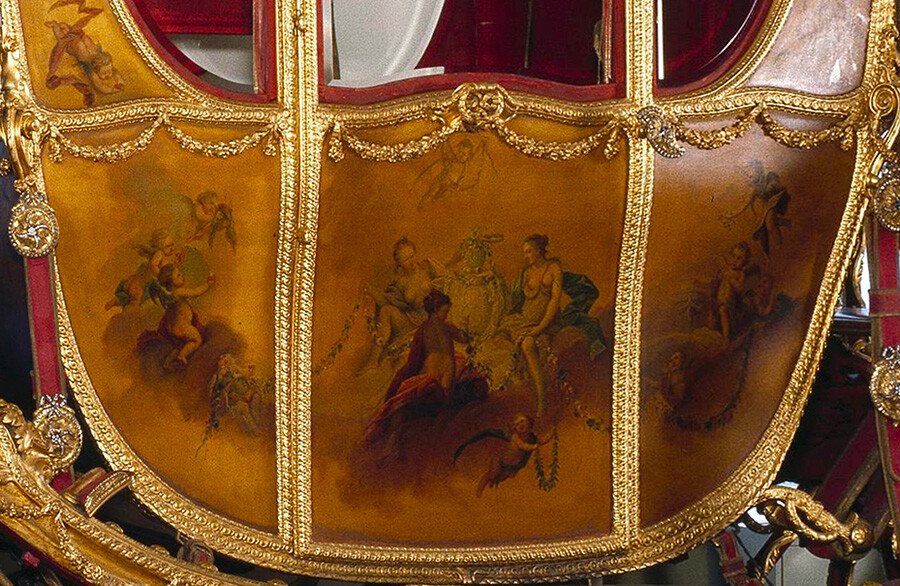 This two-seater touring coach was presented to Catherine the Great by her favorite, Count Grigory Orlov. It was built in the 1770s in England. 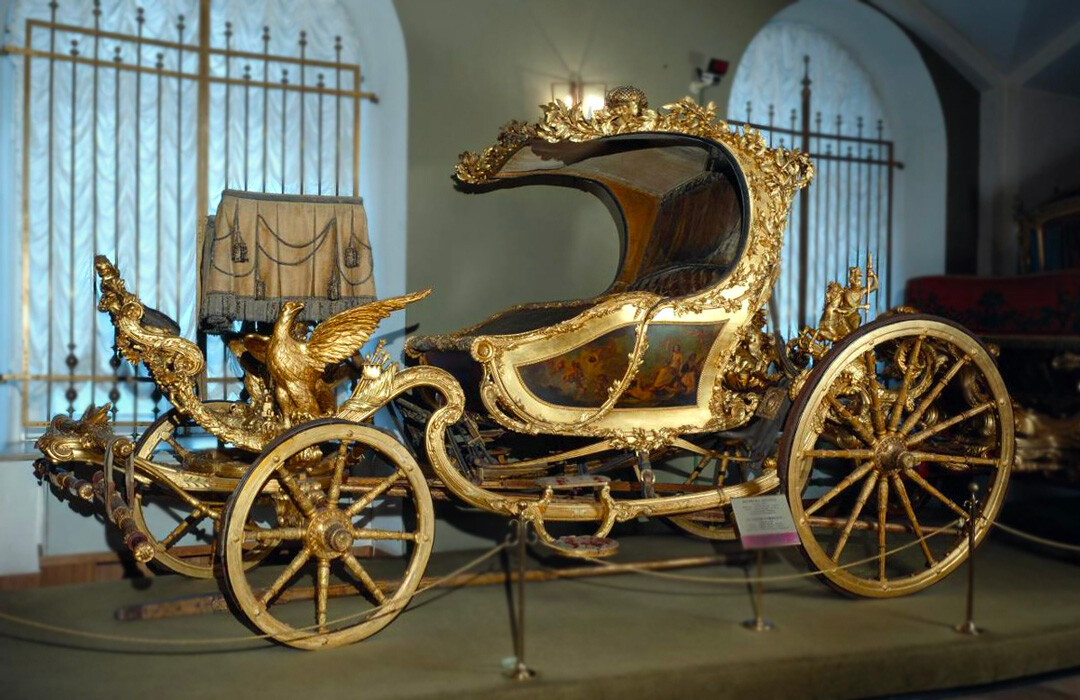 The back wheels are adorned with the figures of Saint George slaying a dragon, while the front wheels are decorated with eagles. 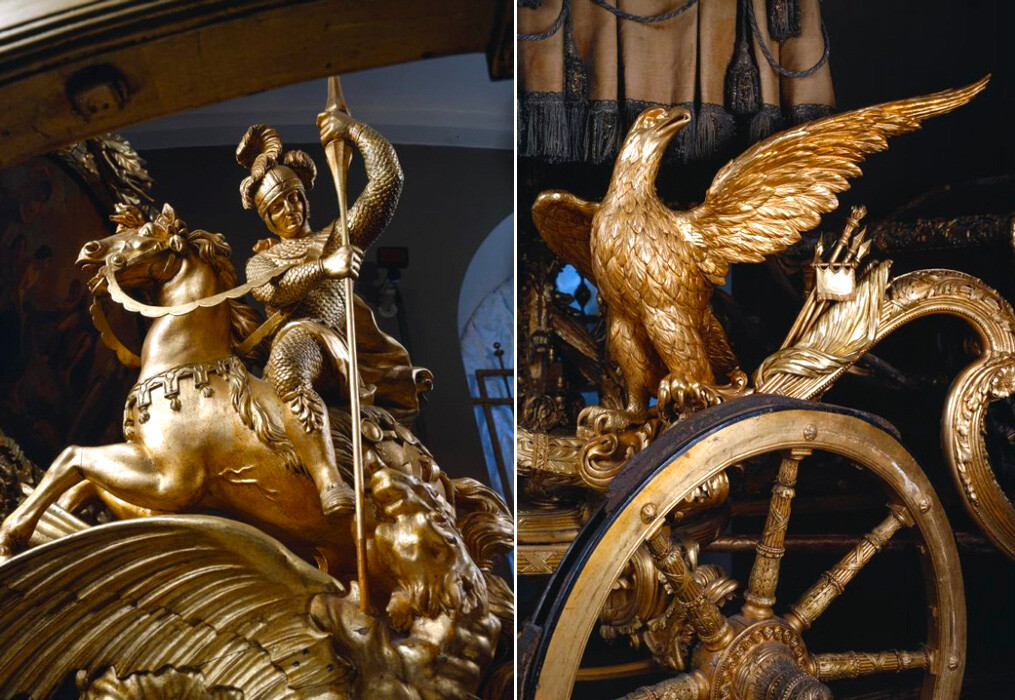 Paul I, who didn’t reign for long, suffered from paranoia and built impregnable castles for himself (ironically, he was assassinated by conspirators in one of such castles, Saint Michael’s Castle). For private travels with his wife Maria Fedorovna, he, however, with no regard for his safety, purchased this touring cart in the classicism style. 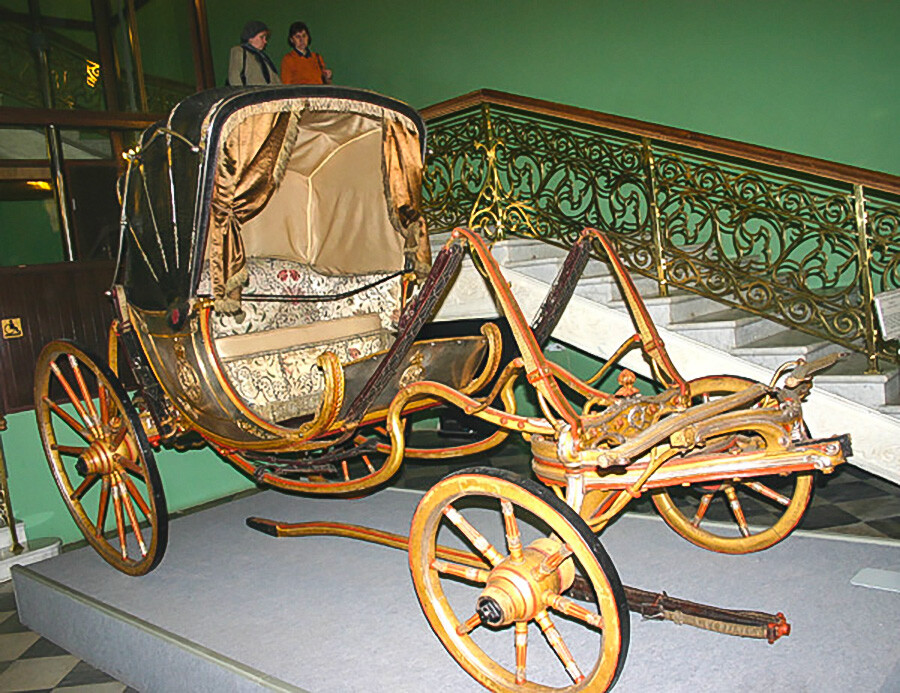 After the death of her husband, the widowed empress traveled in this elegant phaeton with an umbrella, presented to her in 1821 by a Danish ambassador. There’s no box seat for the coachman; instead, the driver rode the horse. 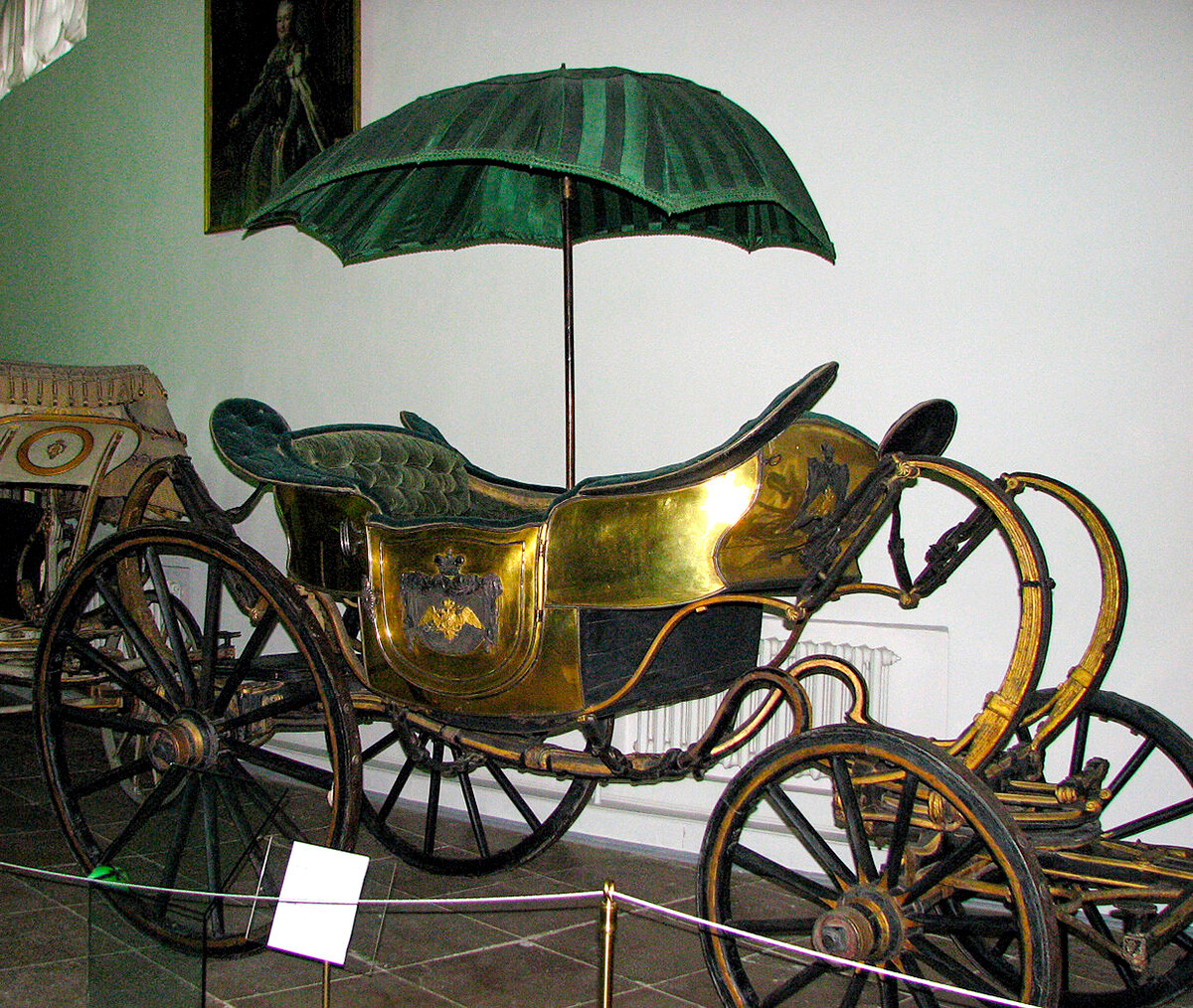 Nicholas had a completely new style. He preferred lightweight and very elegant carriages, for example this convertible cabriolet (this is what such carriages were called). 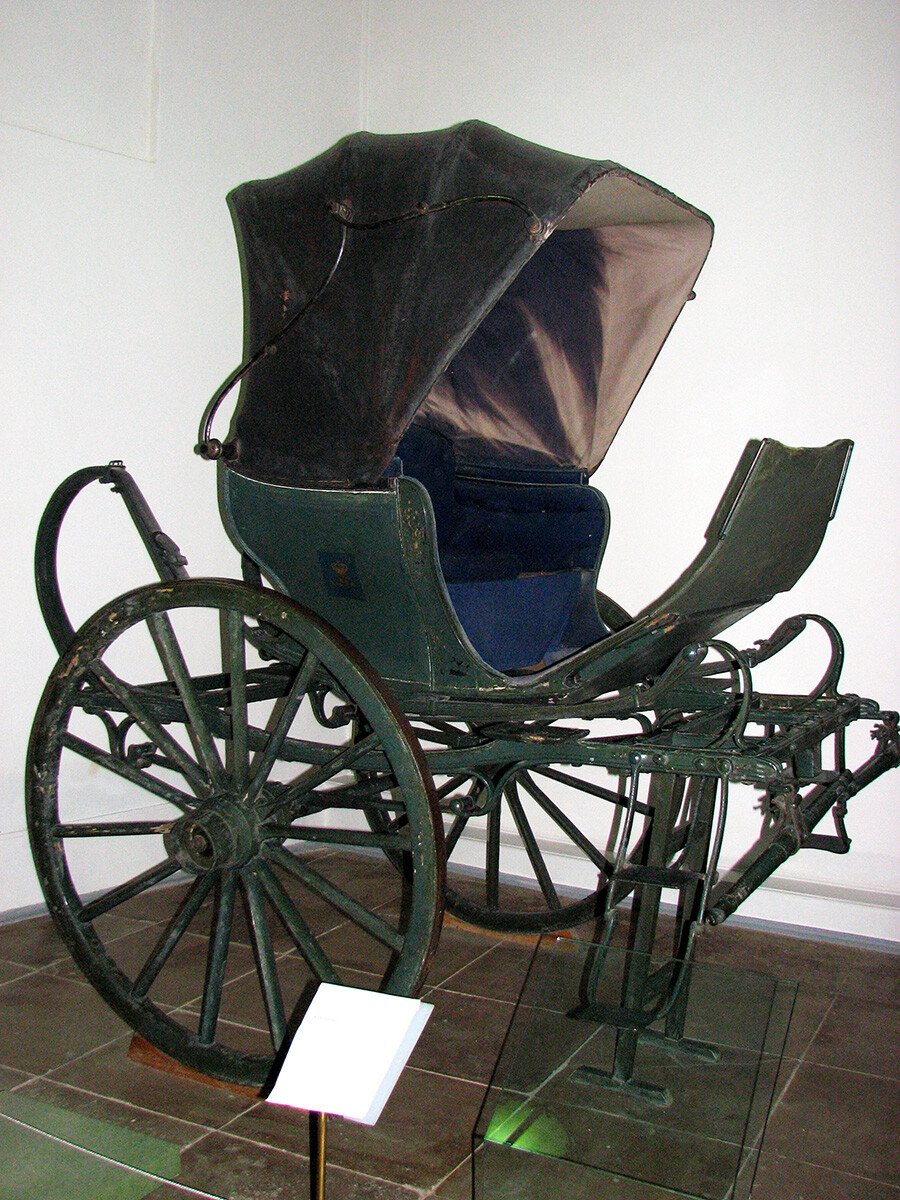 His wife, Empress Alexandra Fedorovna, had a progressive “self-driving cart” that didn’t need any horses. The three-seated cart was set in motion by a hand pedal, located in the back. The person sitting in front simply steered the carriage. 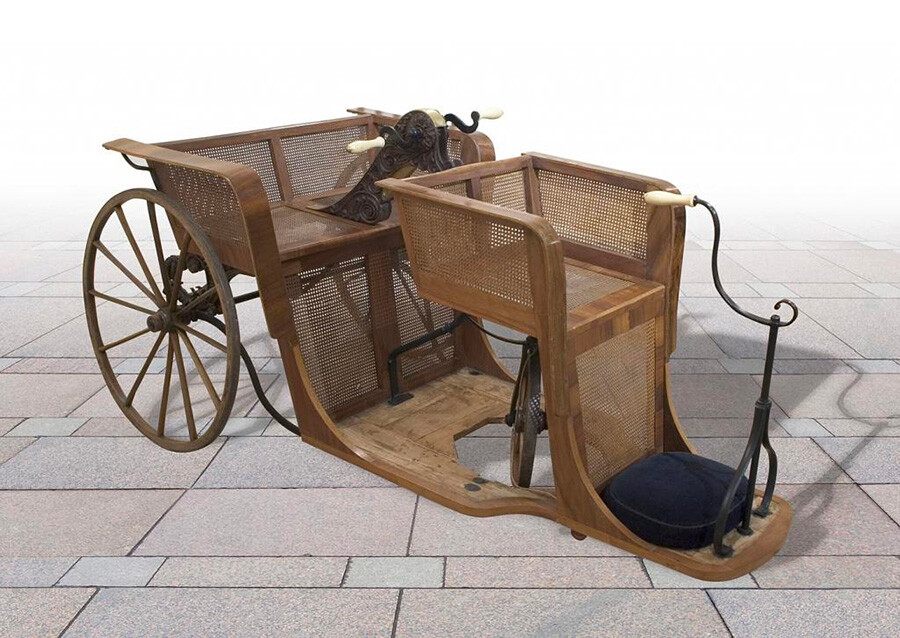 Carriages played a sad role in the fate of this emperor – he died from a terrorist’s bomb, traveling through St. Petersbrug in his carriage. This carriage survived and you can see the bomb damage on its rear wall. This maneuverable compact carriage was called ‘Brougham’ after Scotsman Lord Brougham, who introduced the fashion for such carriages. 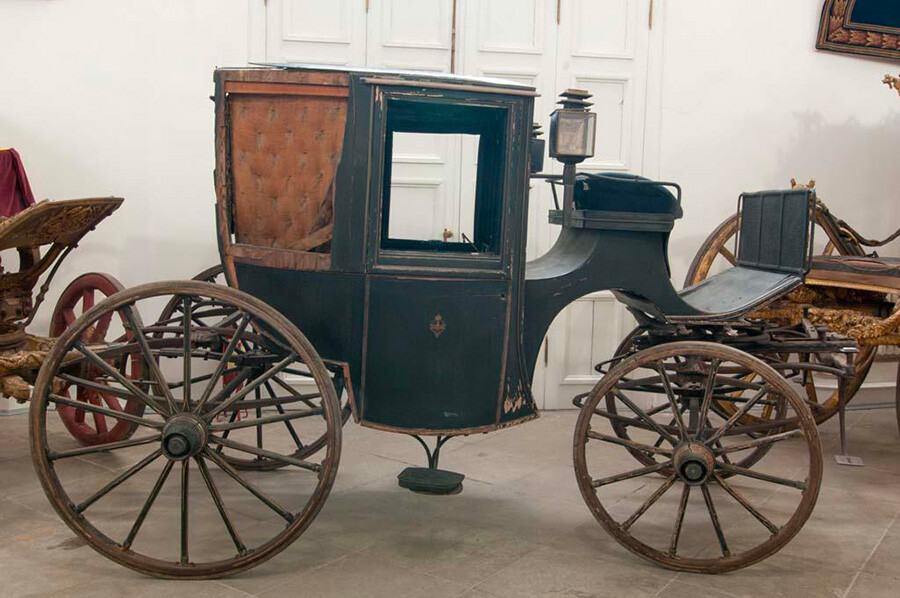 This miniature carriage belonged to Alexander II’s kids. The heir to the throne, future Emperor Alexander III, also rode it along park alleys. 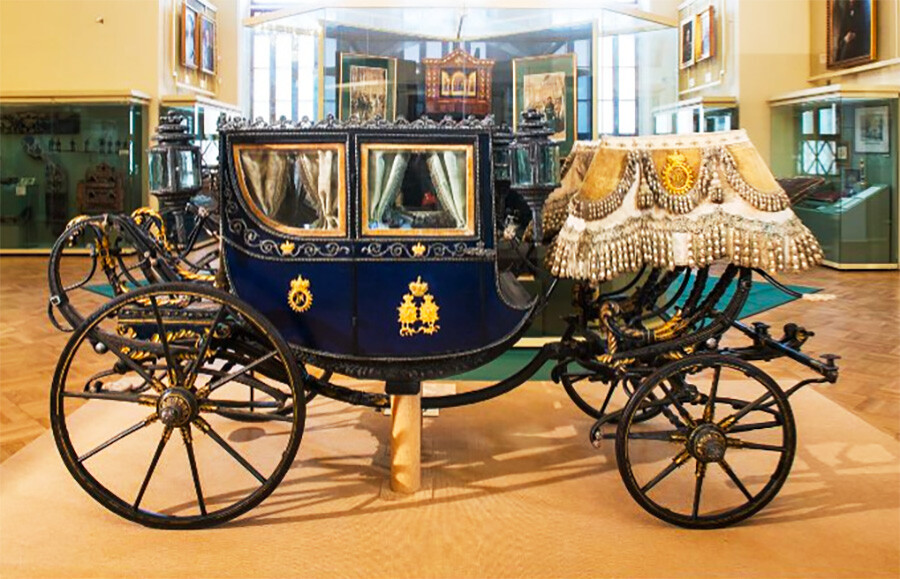 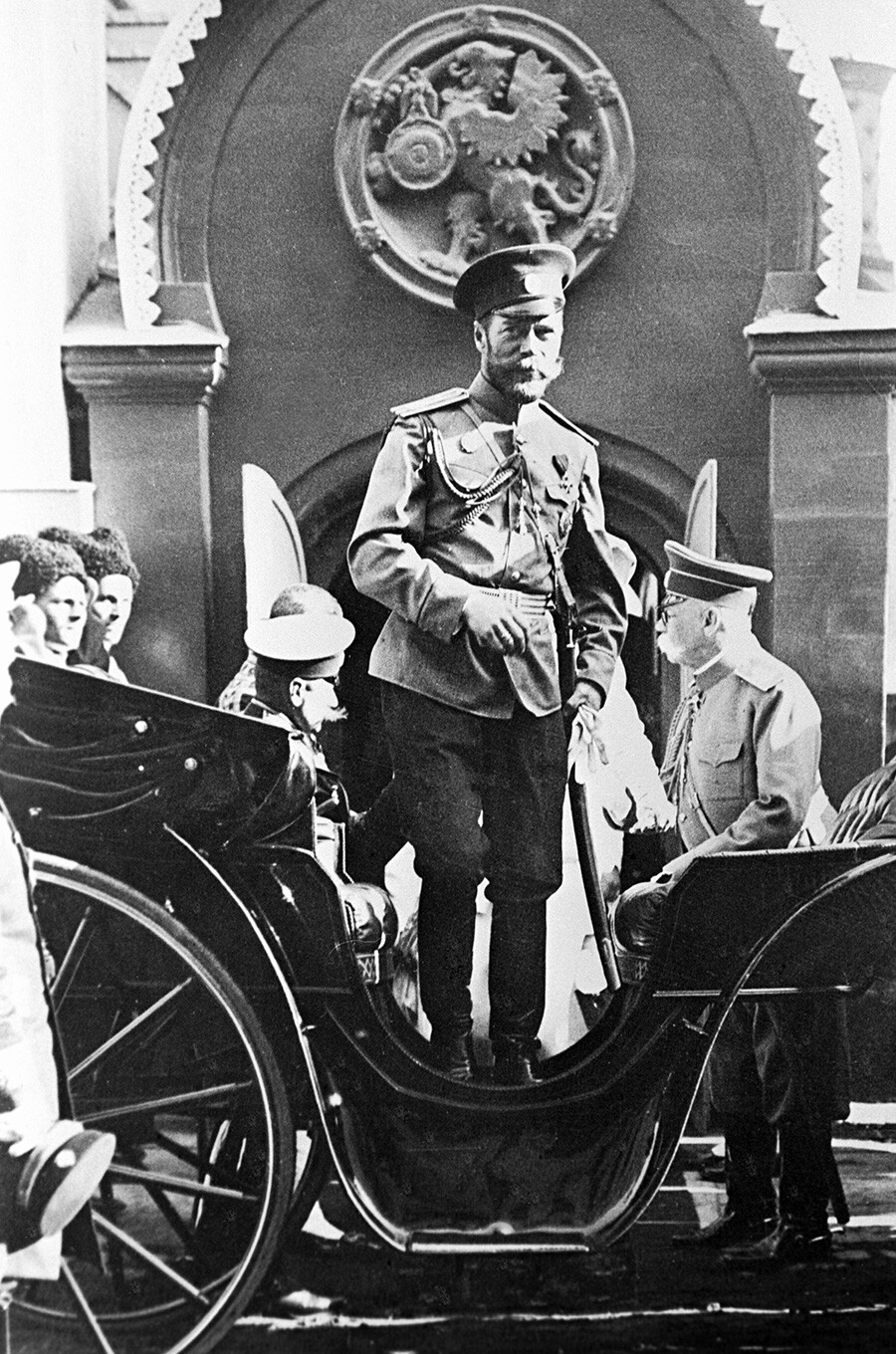 During ceremonies, the last Russian tsar, following protocol, traveled in carriages. However, he didn’t like them much: first, he liked to ride a horse himself; second, Russia already had its first automobiles. And Nicholas owned an impressive collection of cars.

Here, for example, the tsar is approaching his Rolls-Royce.