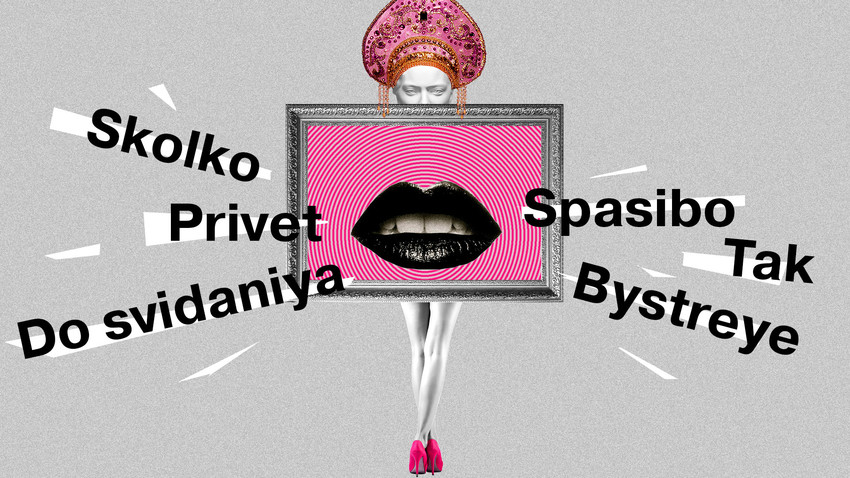 Alexander Kislov
When you’re travelling, just a dozen words can be enough to communicate with locals (or to not get completely lost anyway). Here is a super minimalist Russian vocabulary list for you. We’ll assume you’re already familiar with “da” (yes) and “nyet” (no).

Let's start with something simple. Privet is an informal greeting. You can say “privet” to an acquaintance, a friend or anyone who is around the same age as you or younger (although as a foreigner you will, of course, be forgiven if you don’t get all the minor nuances right).

And if you’re not afraid of a challenge, there is another way of saying hello: zdravstvuyte. Go ahead, try saying that one! This is a more formal greeting and is used when addressing more senior people or in official and business correspondence.

Literally and originally this meant “god save,” although almost nobody remembers this nowadays. In Russian, this is the simplest and most traditional way of expressing gratitude. When a cashier in a shop hands you your purchase, you say “spasibo.” When somebody holds a door for you, “spasibo” again. And so on throughout the day.

The word spasibo can also be preceded by the word bolshoye (big) when you want to thank somebody for helping you out or doing you a favor. Then you get bolshoyespasibo (thanks a lot or thanks very much). Just don’t ever say “spasibo” if you somehow wind up in a Russian prison. There this word is avoided like the plague.

This can be a very useful word if, for example, you are running late in a taxi on your way to the airport. Or if a waiter has failed to notice the anxiety in yours eyes and hasn’t realized you urgently need pay the bill and get out of there. A word of warning: Bystreye can sound a bit rude (although, as with everything, this depends on the context and the company). So it is always better to soften if by adding the word pozhaluysta (please).

For emphasis, you can say “davay bystreye,” which means something like “Let’s do it faster,” thus making this a kind of all-purpose appeal that can be used in situations ranging from when you are hungry and waiting to be served food to when your roommate has been occupying the bathroom for too long.

This universal word can be used in dozens of situations. Tak can be used to say "yes" when somebody asks you a question and is waiting for an affirmative answer. Or it can be an option for saying “ok” or “good.”

Furthermore, should you pronounce tak slowly and pensively, which will imply that you are thinking hard about your answer. If you say it abruptly and sternly, it will mean that you are displeased with something.

It can also be used as a filler in a conversation or when somebody is telling a story you can say "tak" to let them know that you are listening and expectantly awaiting the next part of the story. Here it means something like “so, what happened next?” In other words, with tak you can express virtually everything.

You will need this word to ask how much you need to pay (or how much is to be paid to you), how many times something needs to be done or how long you need to wait, etc. The reply to skolko (and hint: make the “l” sound as soft as you can) should be a figure.

You don’t need to add anything extra to turn this into question: In Russian, a question is created by adding a questioning intonation. So it will just be: “Skolko?”

Both these words express regret at something that happened and imply that you are asking for forgiveness. But don’t expect an actual response since saying it is usually just a polite formality.

Either word can also be used when you want to get someone’s attention. For example, if you’re on the metro and somebody is blocking the exit, say “izvinite” and they’ll get out of the way. Want to get the bartender's attention? Prostite!

This is a powerful word. It gives you access to the world of things that do not belong to you (metaphorically speaking). Instead of asking, “May I borrow this chair?” you can just ask “Mozhno?” Also, we like using mozhno when ordering at restaurants. So, instead of saying, “I would like this salad,” you can just say “Mozhno salat?”

This is a word that will save you a lot of time and nerves if anything goes wrong. Pomogite literally means, “I need help.” Feel free to use it not only in critical situations—it doesn’t carry any additional "fatal" connotations.

This is a word for expressing that you agree to something, and can also be used as a way of saying "yes." “Would you like some more coffee?” “Horosho.” Also, it is a word you can use to express your emotional state. Horosho is when you are not worried about anything and are enjoying the moment. Here is an example of classical usage: Take a deep breathe and, as you exhale, say "horosho," slowly and with feeling. If you add tak and say “horosho tak” or “tak horosho,” you will sound very Russian.

There are about a dozen words in Russian to say goodbye. Which one you should use depends on whom you are saying goodbye to, for how long and when. However, do svidaniya is the most universal phrase. And contrary to its literal meaning ("until our next meeting") it does not actually put you under any obligation to see the person again. There may never be a next time.

Bonus! Forget the phrase “na zdorovie” as a toast

You must have heard this phrase many times. The myth that Russians say this is widespread and persistent. But no, you will not impress your Russian friends with your “na zdorovie” when you want to drink to their health. Na zdorovie actually means "You’re welcome." To find out more about what to say and how when you are drinking with Russians, check out this video.