How did Russian writers perceive the 1917 Revolution? 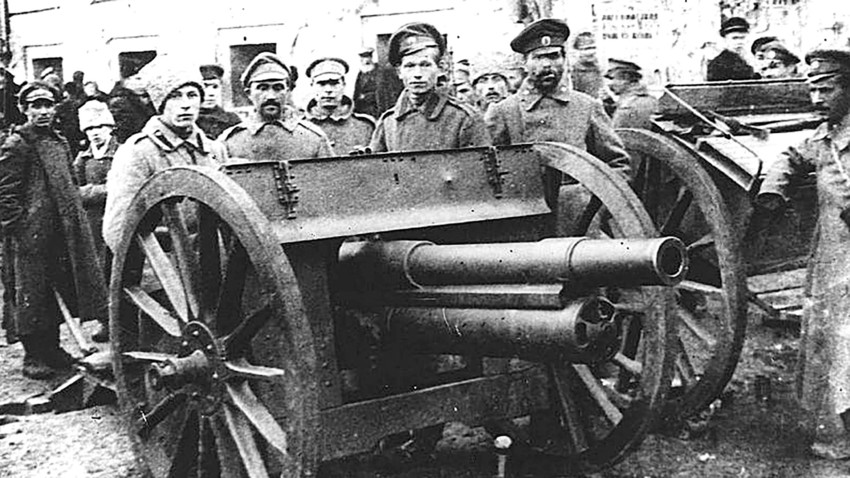 The tumultuous turning point in the country’s history was first met by many writers with hopes for a new and better life. But the brutal methods used by the Bolsheviks soon proved them wrong.

Speaking about the most significant peasant uprising in the 18th century, Russia’s greatest poet, Alexander Pushkin, wrote in The Captain’s Daughter: “May God grant that we never again see so senseless and merciless a revolt.” Today, the words, “a Russian revolt is senseless and merciless,” constitute an aphorism that perfectly describes the 1917 Revolution. Let’s see what Russia’s great writers thought about it.

One of the most influential Soviet writers, Gorky first welcomed both the 1905 and 1917 revolutions, and he predicted the ‘storm’ before it happened in his famous story, The Song of the Stormy Petrel. Gorky embraced the new freedom and the fall of the monarchy, but he was totally disappointed with the way the Revolution and order was established. In his book, Untimely Thoughts, he called for an end to spilling blood and establishing the new state with guns, and instead to develop the Revolution’s intellectual and cultural potential, to use freedom in a productive way.

“Lenin, Trotsky and their comrades have already been poisoned with the rotten poison of power, and the evidence of this is the shameful way that they treat freedom of speech and person and all the sum of those rights, which democracy was fighting for. Blind fanatics and unscrupulous opportunists are headlong racing along the path of the so-called ‘social revolution’…” (1917-1918)

This author of the controversial poem, The Twelve, shows the red turmoil as apocalypses, but it also seems to praises the Revolution, justifying robberies and shootings. And the twelve Red Guards symbolize the 12 apostles of the new faith, as they destroy the old one and join the red coup.

“Everything that has happened brings me joy. No one is able to appreciate what happened yet because history hasn’t seen such a vast scale. It could only happen, and it could have only occurred in Russia,” Blok wrote in 1917 in a letter to his mother. 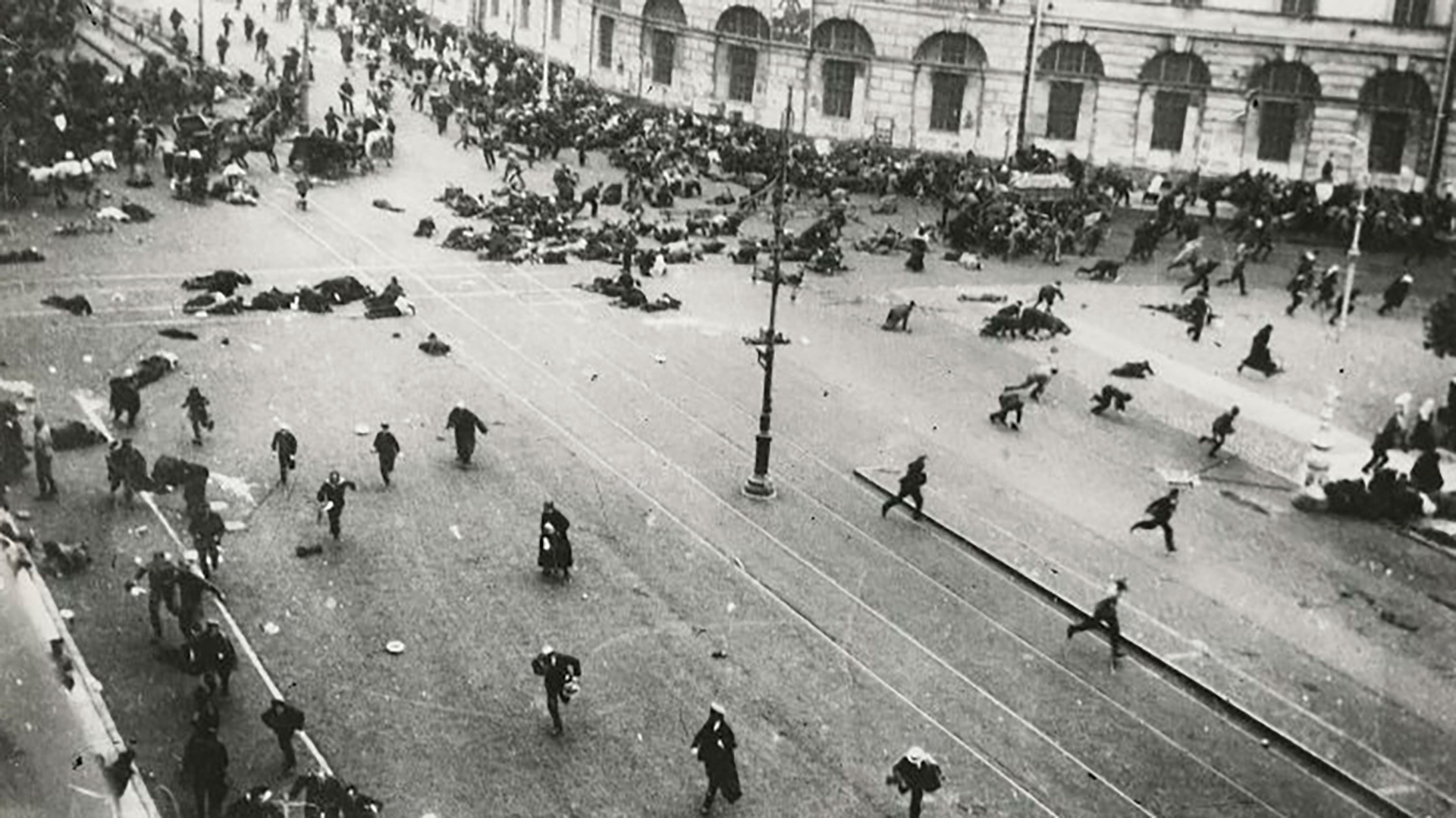 It should be mentioned, however, that after a few years Blok shed all false ideas and realized the Revolution was just the start of another regime, one harsher than the tsarist government.

first Russian to win the Nobel Prize in literature had no illusions about the Revolution. In 1918 he left Moscow for Odessa, the Russian Empire’s most important southern port, and in 1920 he fled the country.

“There once was Russia. Where is it now?” he wrote in his diary, later published as the book, Cursed Days, which depicted the years of the Revolution and ensuing Civil War. As is clear from the title, in this book Bunin is unequivocally negative in his of the Bolsheviks and their “bloody game.” “Lenin, Trotsky, Dzerzhinsky... Who are the most base, bloodthirsty, and vile?”

Nabokov’s father was deeply involved in politics, and he was one of the leaders of the Constitutional Democrats (Kadets), a liberal party that was in opposition to the Bolsheviks. His family was forced to leave St. Petersburg for Crimea immediately after the Revolution, and then in they escaped to Europe. While his father wrote a book about the Revolution, Nabokov was more interested in art and intellectual matters. He perceived the Revolution as trouble for Russian literature, because many great writers had to escape, while others used their skills to serve what the Bolsheviks considered correct and useful for the country.

In the essay devoted to the poet Vladislav Khodasevich, whom Nabokov considered the greatest poet of the 20th century and a faithful follower of Pushkin’s tradition, he wrote that the Revolution and following years were “the years of dullness of our writing,” and that the Revolution “carefully divided poets into a state of staff optimists and backwater pessimists, into overseas healthy fellows and local hypochondriacs.” He also noted that the government required “a tender literary attention” to the inner world, be it “a tractor or a parachute, a Red Army soldier or polar explorer.”

Merezhkovsky was a Russian writer and religious philosopher, and 10 times nominated for the Nobel Prize in literature. As many other cultural he welcomed the Revolution of 1905. But the October 1917 Revolution shocked him. He wrote that Russia was gone, and now is the kingdom of the Antichrist. “Walking across St. Petersburg’s streets and looking into faces, you can at once recognize a communist.”

Merezhkovsky perceived this revolution as a transcendental tragedy for the Russian nation: “It seems that in Russia there is no revolution at all, but only revolts – January, December, Chuguyevsky, Choleraic, Pugachev, Razin – these are revolts of eternal slaves.” 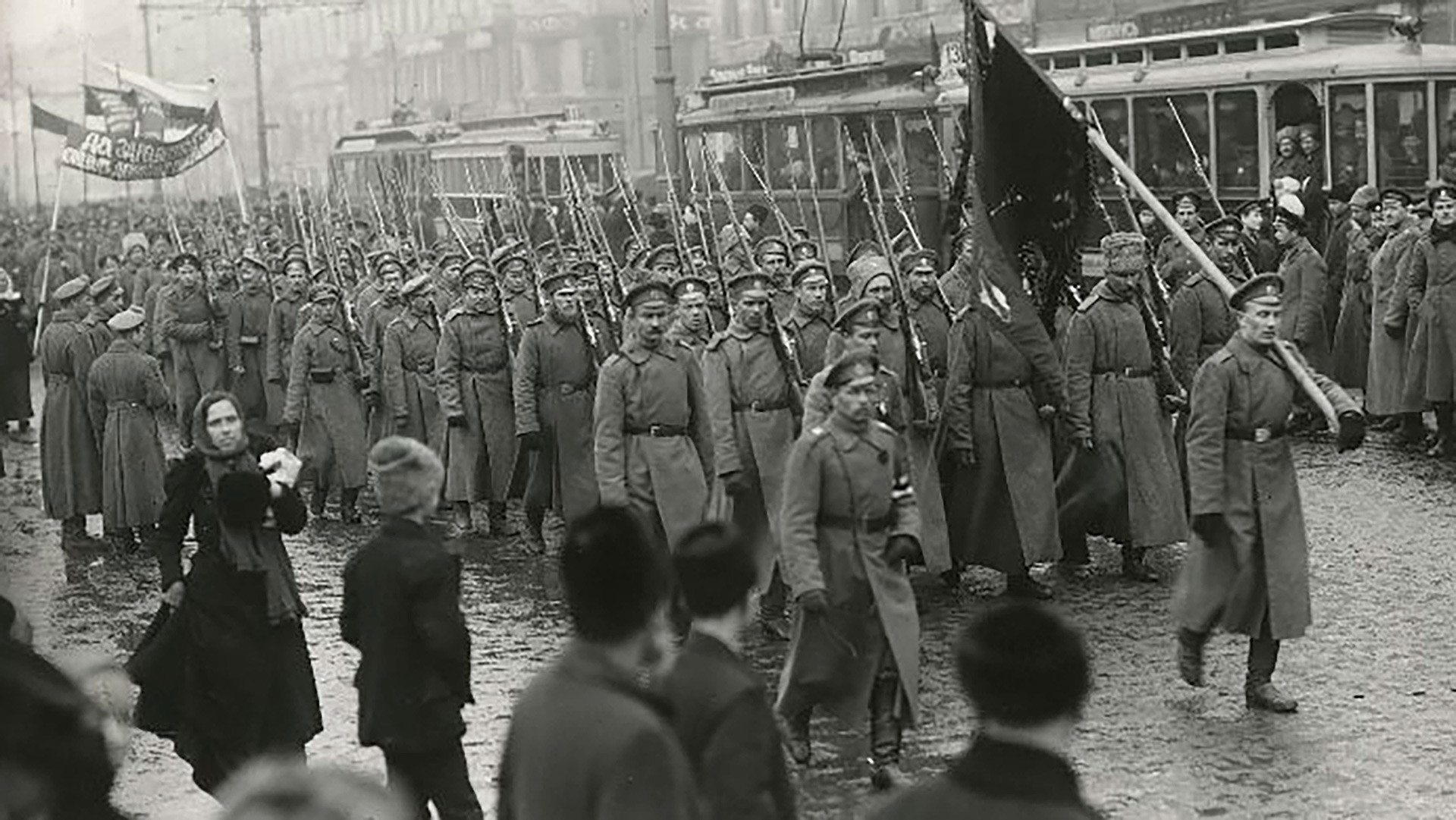 a writer who stayed in Russia, Pasternak couldn’t openly reveal his feelings toward the Revolution, which was a true tragedy for the Russian intelligentsia. However, he did it in his famous novel, Doctor Zhivago, which was banned in the Soviet Union for decades until Perestroika, and first appeared in Italy in 1958 with the help of the CIA.

At first, Zhivago was impressed by the revolutionary events: “What splendid surgery! You take a knife and with one masterful stroke you cut out all the old stinking ulcers,” he says.  But then watching what happened in the country he changed his mind.

“For the inspirers of the Revolution, the turmoil of change and upheaval is their only native element, and they won't settle for less than something on a global scale. The building of worlds – transitional periods – for them is an end in itself. They haven't studied anything else, they don't know how to do anything.”

was one of those who enthusiastically welcomed the first revolution of 1905. In 1906-07 he lived in Italy at Gorky’s place. Like many other writers, however, he became disillusioned in the Revolution and eventually headed the reactionary newspaper, Russkaya Volya (Russian Will), which in 1917 criticized the Bolsheviks, who in turn, forcibly shut the critical newspaper. Andreyev was an expressionist and an emotional writer, usually exaggerating things to such an extent that even Leo Tolstoy once said that Andreyev’s publications frighten. 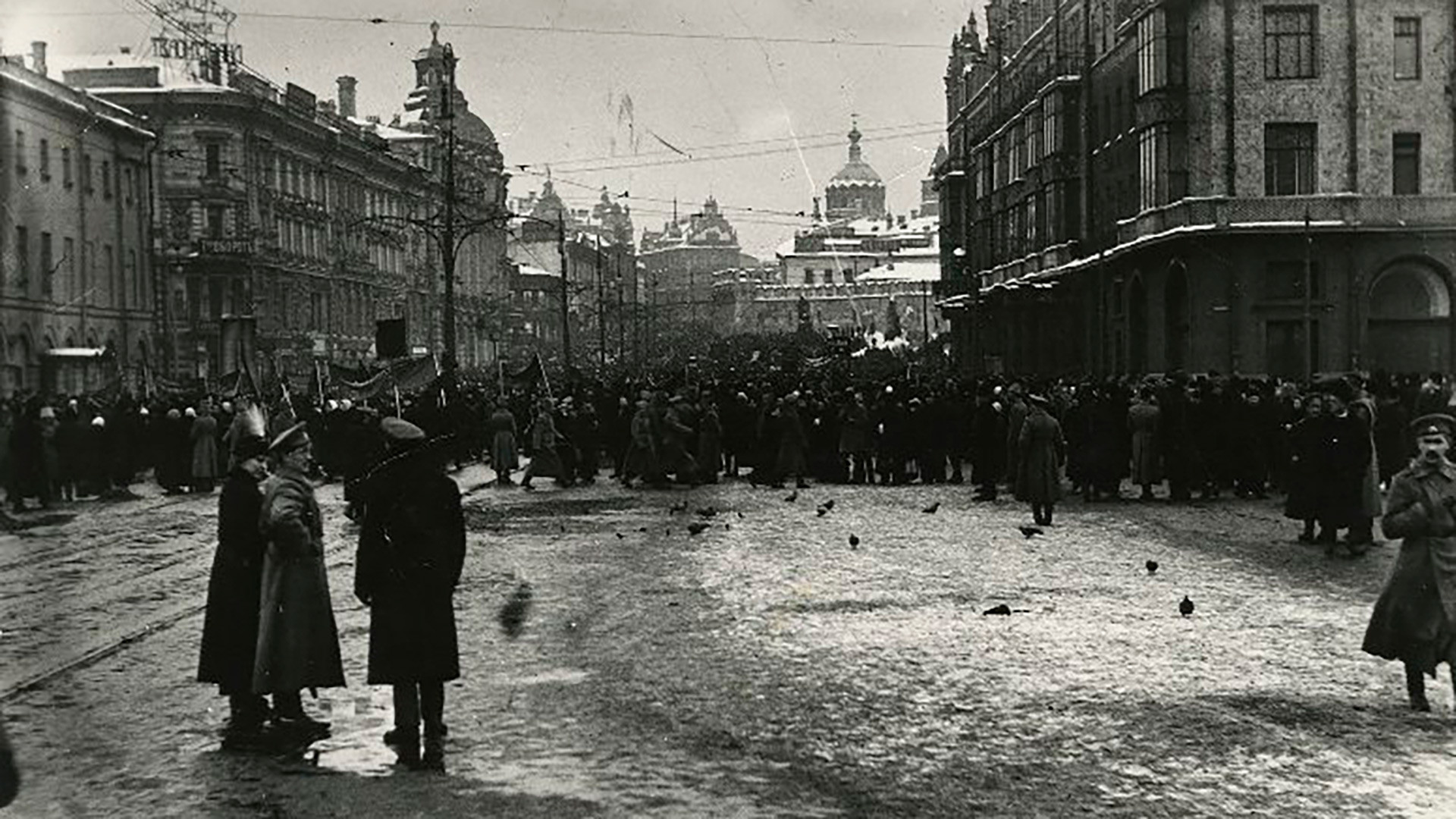 First days of the Revolution in Moscow

“Over the July corpses, over the puddles of red blood steps up the conqueror Lenin, a prideful winner, triumphant – welcome him louder, Russian people! Come, the winner! Recently you were nothing – and now you are almost a god, Lenin… ” In the same emotional and sarcastic Andreyev blames Lenin in contempt of the law, as well as the entire Russian nation.

“I’m truly an active member of the Petrograd insane asylum. I participate in uprisings and constant gunfire - like a hare taking part in the hunt. Lunacharskys, , abound, Soviets, ministries, crises. And so many idiots!”

One of the greatest poets of the 20th century, Anna Akhmatova suffered terribly from the Revolution and Bolshevik rule. In 1921, her husband, poet Nikolai Gumilev was executed, and after the Second World War her son, Lev was sentenced to 10 years in a labor camp. She perceived the Revolution with anxiety.

“It's going to be the same as the Great French Revolution, perhaps even worse,” she wrote in March 1917 right after the February coup.

“I watch wistfully everything that is happening in Russia. God is punishing our country,” she wrote in August in a letter to her husband. 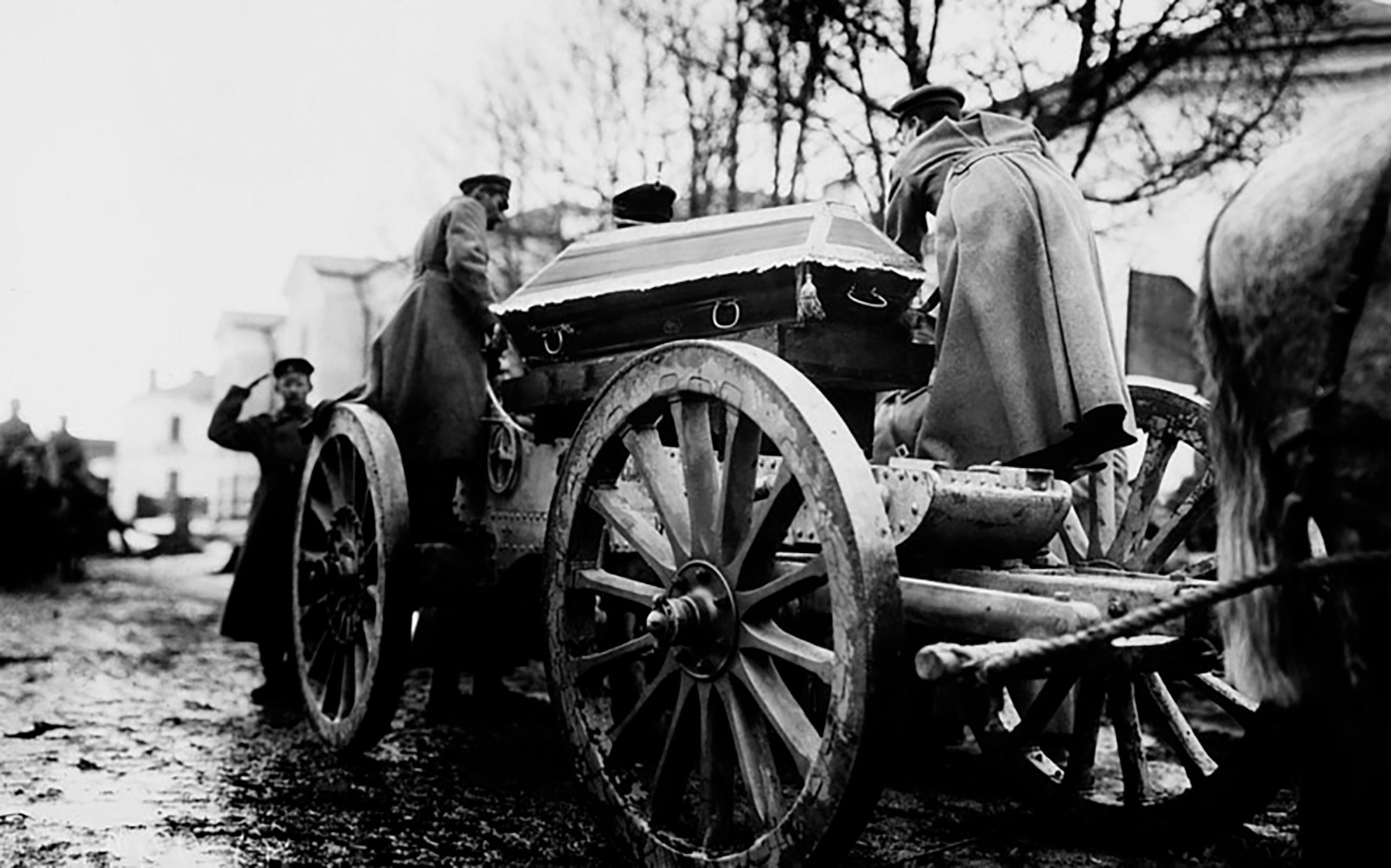 Funeral of the February Revolution's victims

She stayed in Russia, never leaving as did many other writers, and she wrote numerous poems showing her attitude to what the Bolsheviks had done to the country.

All is changed, betrayed, and languished,
Death’s black wing has been flashing in flight,
All is gnawed by the ravenous anguish…
So how is it that we bask in the light?

Voloshin primarily lived in Crimea, where he saw once prosperous people from Moscow and St. Petersburg fleeing the revolutionary turmoil. When he went to Petrograd he saw the bloody mess himself: corpses lying on the streets and people in panic.

“There exist obligatory monopolies that the state has no right to renounce. One of these is the monopoly on bloodshed. The state says: ‘Only I have the right to shed blood. All private bloodshed is forbidden.’ Just as it says: ‘I impose a monopoly on the selling of wine. Any home-brewing of alcohol is forbidden.’ If this monopoly is not maintained by state power, then private alcohol production ensues. The Russian Revolution will be long, bloody and cruel,” Voloshin wrote in Crimea in March.

“On the subject of political events: I have the impression, which grows stronger and stronger all the time, that our entire revolution will ultimately turn out to be a colossal piece of German provocation. We have already been defeated by Germany, and the overthrow of the autocracy was the last piece of bacon that tempted us into the mousetrap,” he wrote in June.

Bulgakov was a monarchist and was very pessimistic about the Revolution from the start. He witnessed the chaos and tragedy of the Civil War from his home Kiev where he was born and raised. The autobiographical novel, The White Guard, features those events. He never emigrated, and all his writings criticized the new country and the new system. Most of his works were banned for many years and illegally sent abroad by his wife, which helped save his legacy.

In Dec. 1917, shortly after the October coup, Bulgakov wrote in a letter to his sister: “Recently, on my trip to Moscow and Saratov, I was compelled to see with my own eyes what I would not like to see again. I saw gray crowds, whooping and swearing vilely, smashing the glass in trains, I saw them smashing people, I saw ruined and scorched houses in Moscow... obtuse and bestial faces.

“I saw crowds besieging the entrances of seized and shut banks, hungry lines by shops, I saw hunted and pitiful officers, I saw the pages of newspapers, where they write about just one thing: about that is flowing in the south and in the west and in the east. I saw everything with my own eyes and understood once and for all what had happened.” 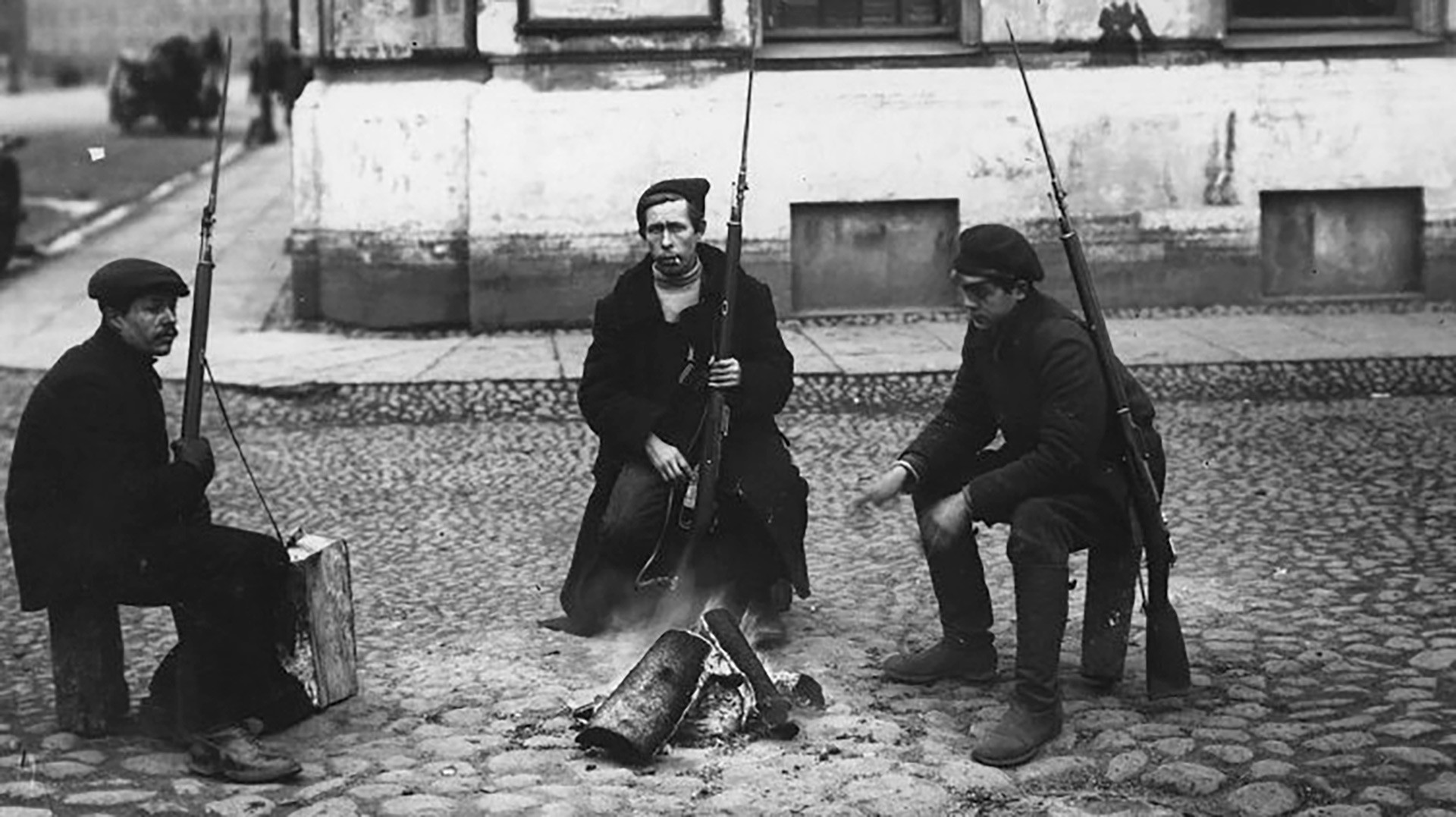 After the Revolution, in 1919 Bulgakov starts his article, “Future Prospects,” with these words:

“Now, when our unfortunate Motherland lies at the very bottom of its pit of shame and affliction, driven there by the ‘Great Socialist Revolution,’ more and more frequently many of us are beginning to have one and the same thought. <…> What will become of us?”

Bulgakov predicted that while the West will recover from World War I, Russia will face the “malignant disease” called revolution and will fall behind in development, and no one can be certain whether the country will ever catch up to the West.